Egypt is like a magical book of infinite tales dating back to more than 4500 years filled the great characters, themes, ideas, and events that shaped and changed the course of history. The attractions of the ancient Egyptian Civilization is the ultimate bridge to cross the boundaries of time & space and get the chance to reveal all the mysteries of ancient Egyptian history. For more than six years, Egypt Tours has been the pinnacle of Tourism after Egypt has declared for more than five years as one of the top five finest travel destinations by the UNESCO since 2014. Egypt holds everything a traveler is looking for from historical and archaeological wonders across mythical and beautiful cities such as Cairo, Luxor, Aswan, and Sinia; there are also the heavenly natural tropical attractions of the red sea like Hurghada, El Gouna, Marsa Alam, & Sherm El Sheik.  Every moment spent in one of the best places in Egypt will be like witnessing a glimpse of the heavens through exploring the diverse cultures, the incredible and entertaining activities found all over Egypt. Discover the history of this great nation by exploring the immortal wonders such as:

1. The Pyramids of Ancient Egypt 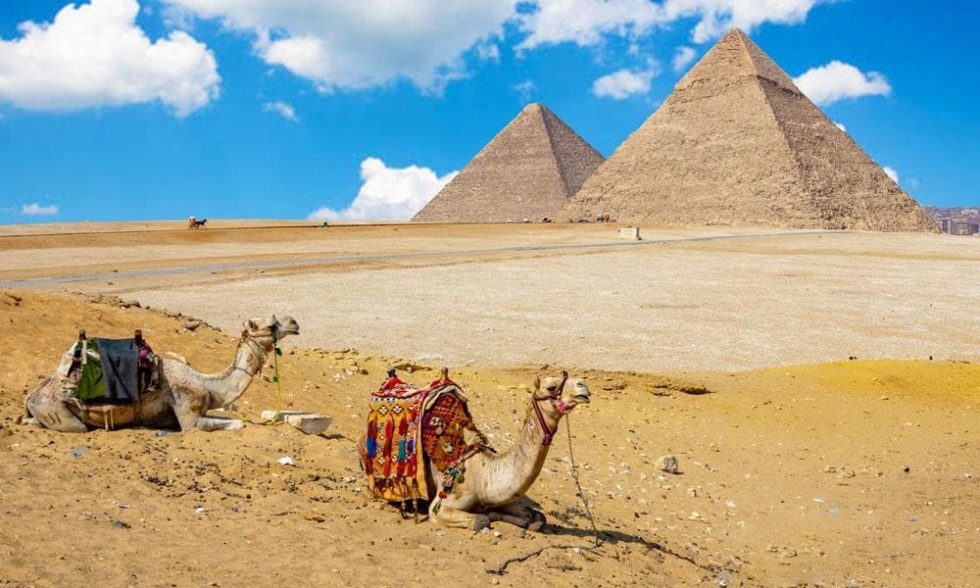 The greatest historical and architectural achievement ever created is the great Pyramids of Giza found in the heart of the Giza pyramids complex across the west bank of the Nile in Cairo. The three great pyramids of Giza belong to Pharaoh Khufu, Khafre, and Menquare which were created in the old kingdom (2613 – 2181 BC) during the 4th dynasty (2580-2560 BC) more than 4500 years as a staircase to the heavens and royal tombs worthy of carrying the names of a pharaoh. The Great Pyramid of Khufu is the only standing wonder of the seven wonders of the ancient world which would explain why it is the most visited attraction in Egypt. It has a height of 147m (481 Ft) which took the help of more than 120,000 free skilled workers and the usage of 2.3 million blocks of limestone each weighing 2.5 tons. Another marvelous construction is the golden step Pyramid of Saqqara built by the legendary Imhotep in 2667 BC for pharaoh Djoser northwest of the city of Memphis the first capital in the history of Egypt to change the course of ancient Egyptian Architecture for eternity.

2. The Two Temples of Abu Simbel 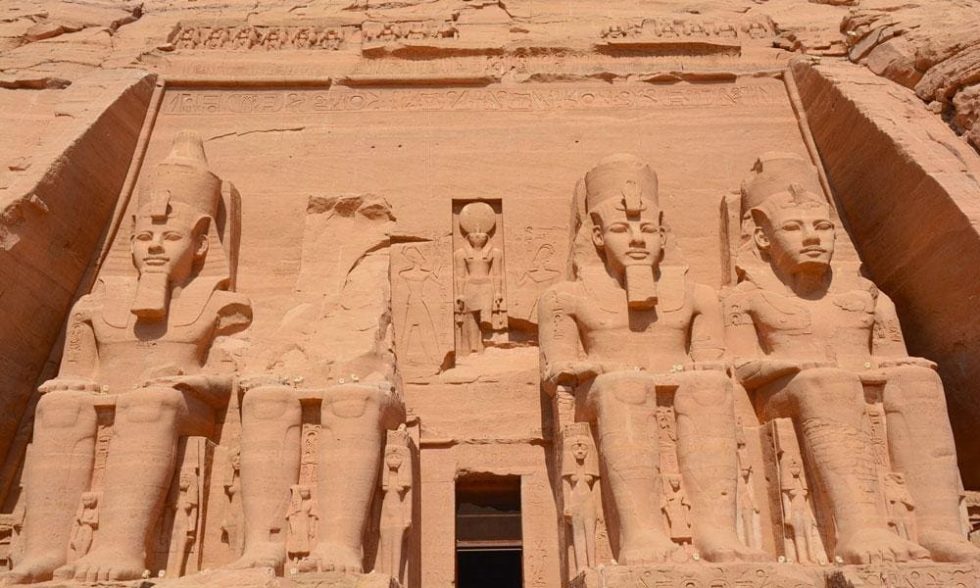 The greatest construction ever constructed in history is the immortal Abu Simbel Temples located in the south of Egypt in upper Egypt about 290 km southwest of the border of Aswan, on Lake Nasser’s west bank. The Abu Simbel temple is a UNESCO heritage site due to its unbelievable importance of revealing a great deal about the history, architecture, and culture of the new kingdom. The temple was built from 1264 BC till 1244 BC and rediscovered totally preserve, buried in the sand in 1813 AD. It was famous as the Temple of Ramsess, beloved by Amun and celebrates gods such as Ptah, Ra-Horakty, Amun through the sun festival one of the most important times in Egypt which takes place on the 22 of February and October annually while the temple of Queen Nefertari celebrated Hathor. 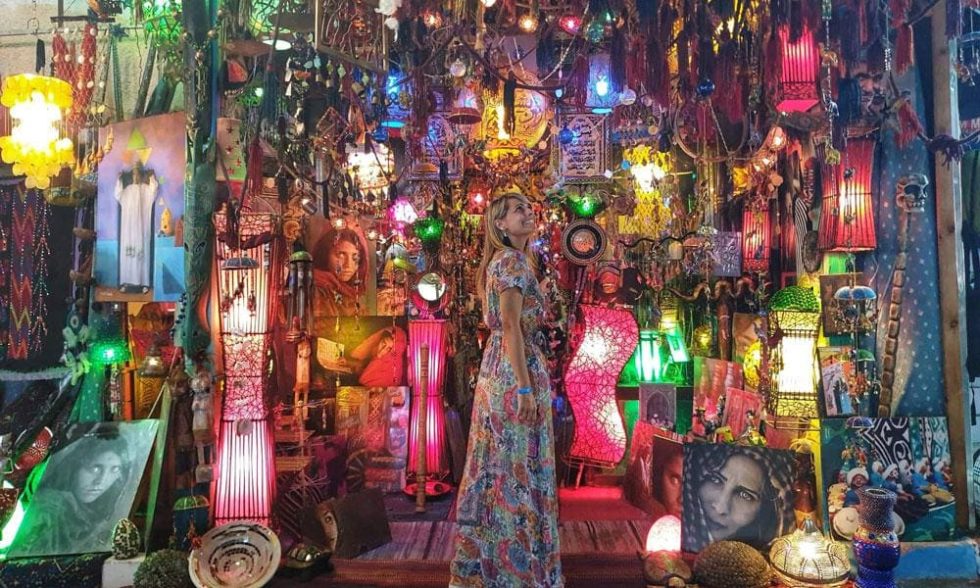 A Golden path filled with wonder and magic built during the prosperous Islamic age in the 14th century during the ages of the Fatimid and the mameluk. It remains a massive trade center for over 600 years filled with a huge and wonderful labyrinth. It has a place to find the most skilled artisans and coppersmiths plus the finest collection of textiles, spices, perfumes, ceramics, artifacts, and many more. The bazaar is surrounded by a number of amazing Islamic construction the showcases the mesmerizing art and architecture Sultan Hassan Mosque, Amr Ibn Al-as Mosque, Al-Azhar Mosque, Ibn Tulan, and many more. 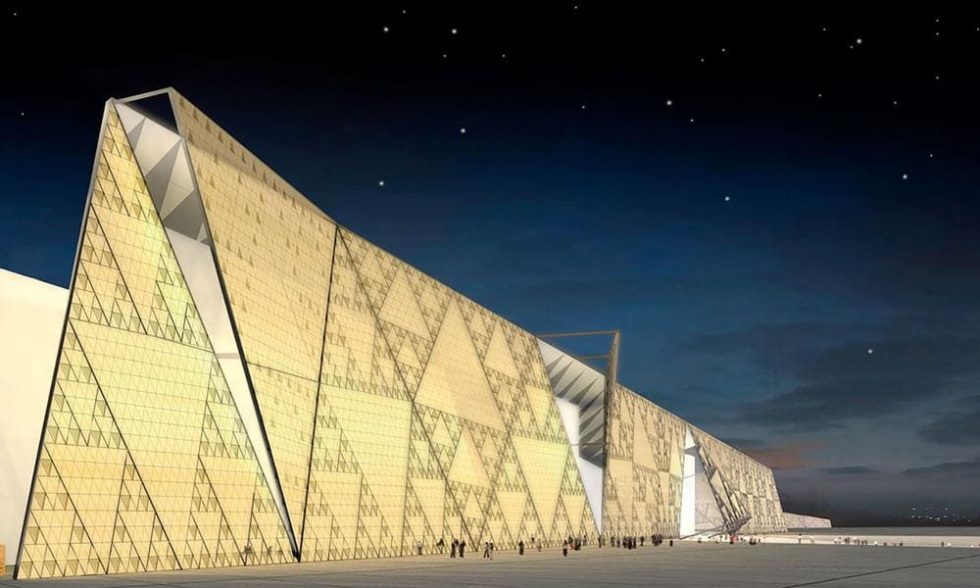 An ambitious dream came true which made Egypt the owner of the biggest archaeological museum dedicated to the largest collection of ancient Egyptian monuments on the planet. It is located on 480,000 square m (5,200,000 sq ft) just 2km west of the Giza Pyramids complex. It was built with about a billion dollars to contain 150,000 artifacts including the entire collection of young pharaoh Tutankamun. 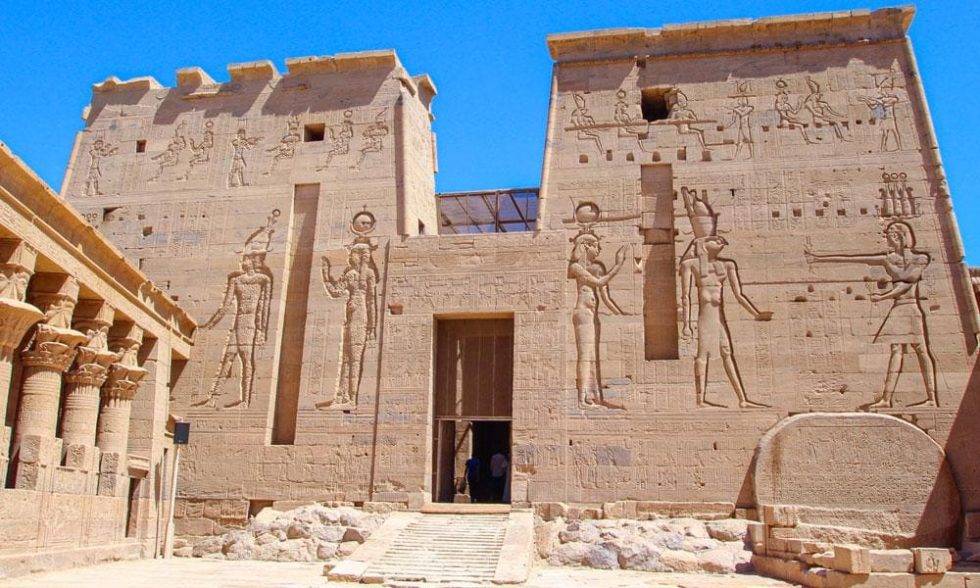 One of the last temples to be built in the history of Egypt construed in the Ptolemaic era (305 – 30 BC) as one of the last ancient Egyptian temples to be built between 280 BC and 262 BC across the Nile River, near the expansive First Cataract of the Nile in Upper Egypt and opposite the Aswan Sahara. It is dedicated to Isis the Goddess of Motherhood, love, and healing which narrates the oldest tale found carved on the temple walls about Osiris who became the ruler of the Underworld after being killed by his brother Set god the war & desert out of envy and avenged by his son Horus the sky falcon god. The temple was moved into a new location with the Abu Simbel temple in the 60s to escape destruction by water floods with the help of UNESCO. The most relaxing method to explore the wonders of Upper Egypt is a Nile River Cruise between Luxor and Aswan. 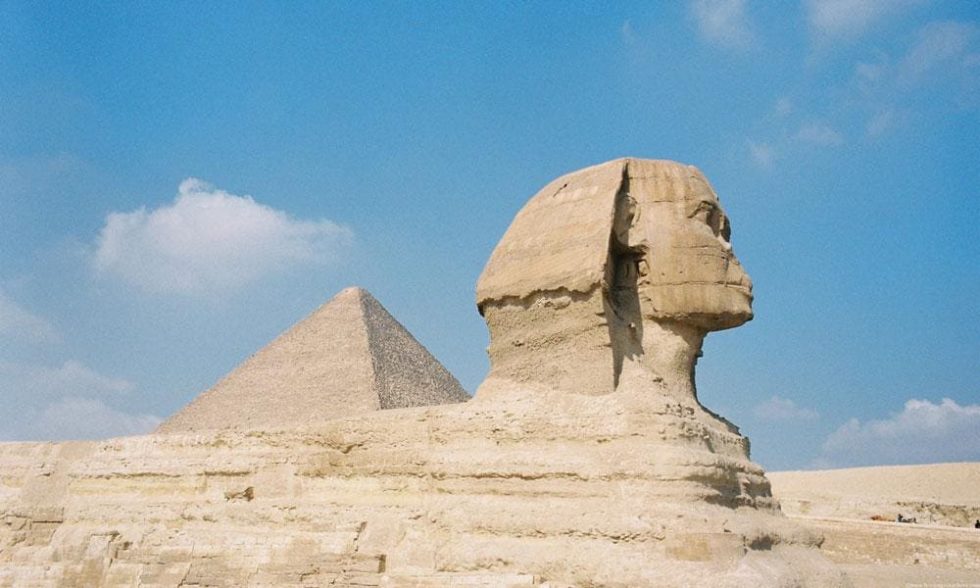 The most famous statue in the world known for its mysteries and might, The Sphinx has stood guard in front of the great pyramid of Pharaoh Khafre (2558-2532 B.C) since its creation in that same time period. It was carved on a single limestone rock to resemble a mythical creature called the sphinx and the facial features of Pharaoh Khafre. It has a height of 73 (240 ft), a width of 19m (99 ft), and a missing nose. 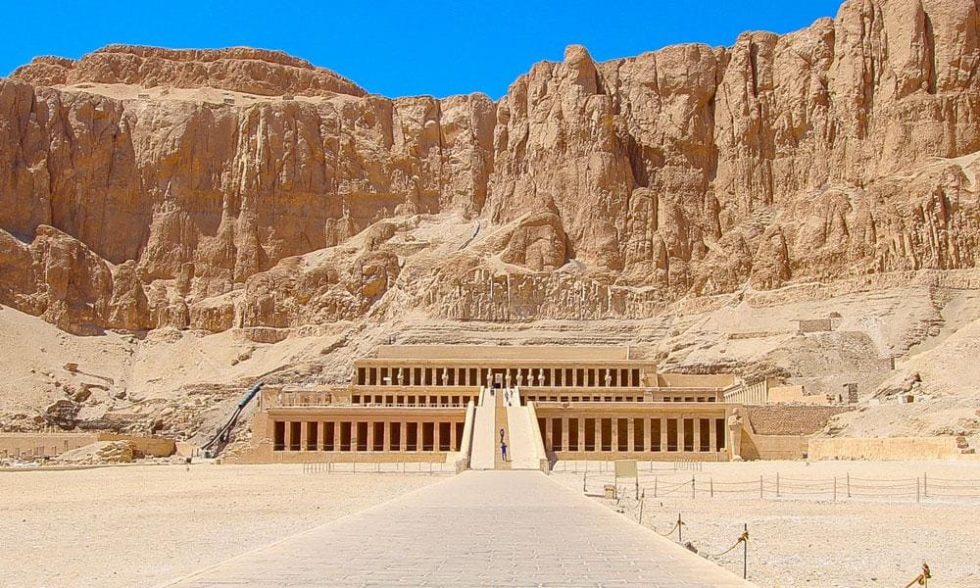 There is no temple in Egypt that can compete with the beauty of the great Hatshepsut temple. One of the most skillfully built and preserved temples in all of Egypt, containing a reflection level of allure, class, and grandeur. It is known as Djeser-Djeseru “Holy of Holies” Hatshepsut mortuary temple which was built in the 18th Dynasty during the new kingdom by the most successful ruler in ancient Egyptian history Queen Hatshepsut (1473 – 1458 BC) for honoring the creator God Amun. 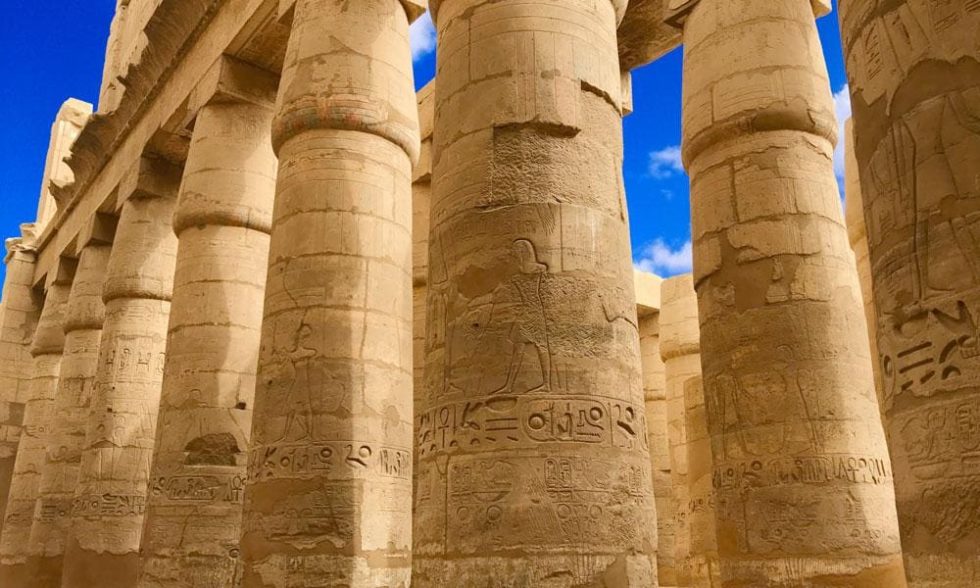 The holiest location in all of Egypt and possibly the world, The Karnak Temples Complex Ipet-isu “The Most Selected Of Places” and Pr-In “House Of Amon” showcases the rise, progress, and innovation of ancient Egyptian Architecture over the years starting from the middle kingdom (2040-1782 BC) in the reign of Senusret I during the 16th century BC then enhanced in the new Kingdom (1570-1050 BC)  till the Ptolemaic period (323-30 BC) where it was left in the sand to discover thousand years later. One of the most recognized aspects of the complex is the Avenue of the Sphinxes. It was the biggest house of worship in ancient Egypt filled with a number of awesome decorations, art, and architecture. It was dedicated to the worship of the Theban triad where each had its own temple which consisted of the creator god God Amun, his wife Mut goddess of justice, and balance and their son Khnsou the moon god, plus many others like Ptah, Osiris, and Isis.

9. The Valley of the Kings 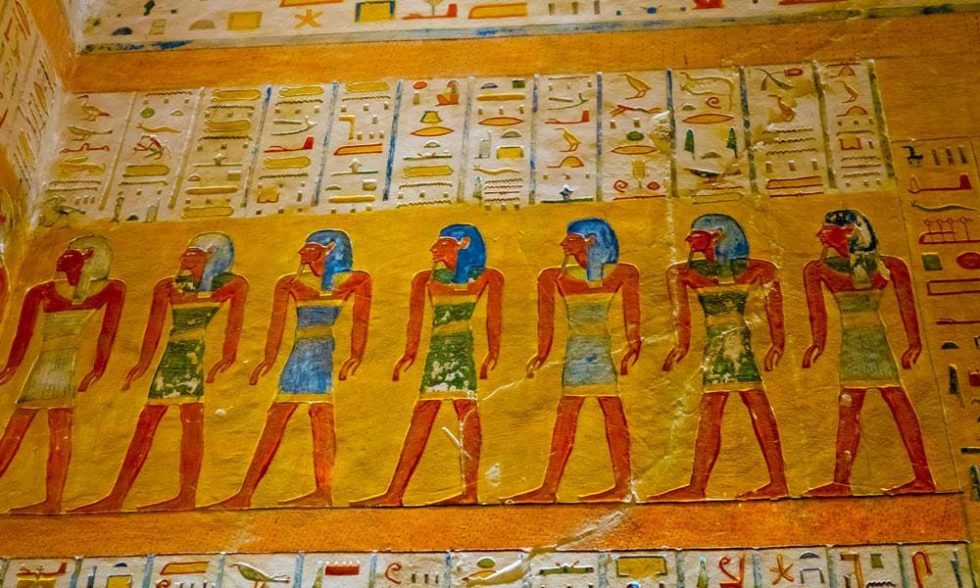 One of the most majestic attractions in Upper Egypt is the heavenly Valley of the Kings home to a marvelous time capsule filled with unique artistic decorations from the ancient Egyptian mythological beliefs and captivating treasures accompanied with funerary practices. It holds 63 rock-cut tombs carved in the essence of the mountain dating to the new kingdom (1570 – 1050 BC) from the 18th till the 20th century from 1539 to 1075 BC. Some of the most famous rulers include Seti I, Ramses (I, II, III, IV, V, VI, VII, IX, X), Hatshepsut, Amenhotep I, the famous boy-king Tutankhamun, and many more kings and queens. 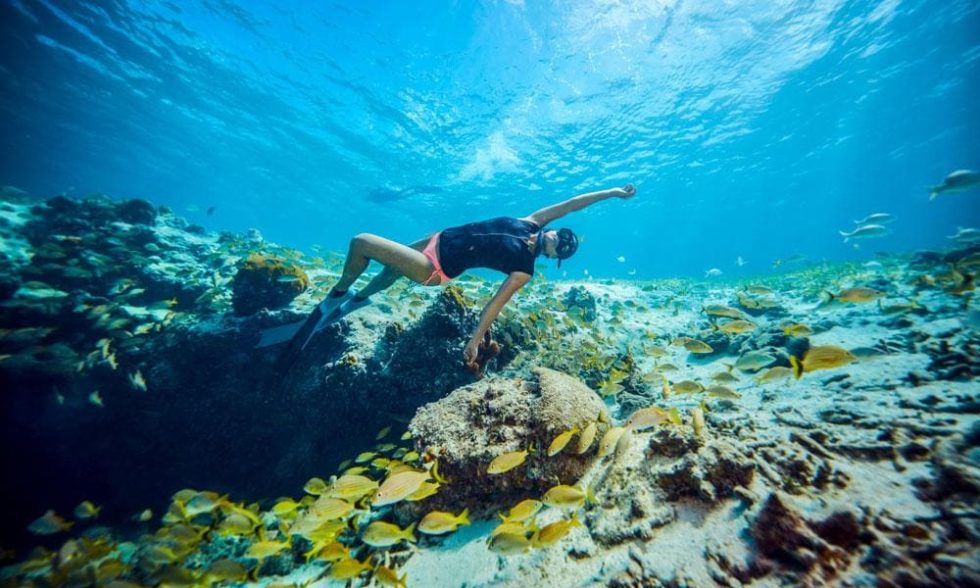 Across the shores of the red sea is a number of wonderful tropical attractions offering the finest aquatic destination like Marsa Alam, Hurghada, Dahab, Sharm El-Sheikh, El Gouna which leads to marvelous spots like the infamous Blue Hole, Fury Shoals, Thistlegorm Wreck,  and El-Phinstone Reef where snorkeling and diving are out of this world showcases the tremendous beauty of over 1200 species and enchanting coral reefs. Across the red sea is a heavenly path leading to the ancient holy land of Sinia.

The incredible attractions of Egypt are one step away for all travelers who wish to witness and explore the most complete examples of pure beauty, class, and glory. Your adventure is out there so don’t waste any time and make every moment count.