After exploring the Ukrainian capital, Kyiv, for a few days, I set my sights on the city of Lviv in western Ukraine. Come with me as I explore the Old Town of Lviv, Ukraine!

Lviv is the biggest city in western Ukraine and is also thought of as the prettiest city in the country. It dates back to the 13th century and is considered one of the country’s main cultural centers. 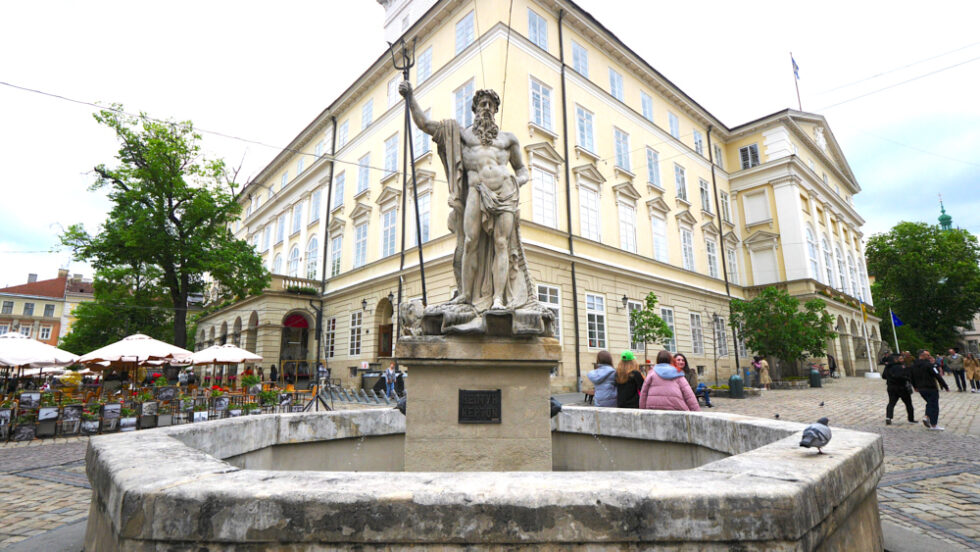 My guide Diana from Tours by Locals and I started our tour of the city in Rynok Square, which has been the heart and soul of the city since the Middle Ages. It dates back to the second half of the 13th century. The square is bounded by roughly 45 UNESCO buildings, as well as the City Hall, museums, restaurants, and coffeehouses. There are also 4 quarters around it: Catholic, Armenian, Jewish, and Orthodox. 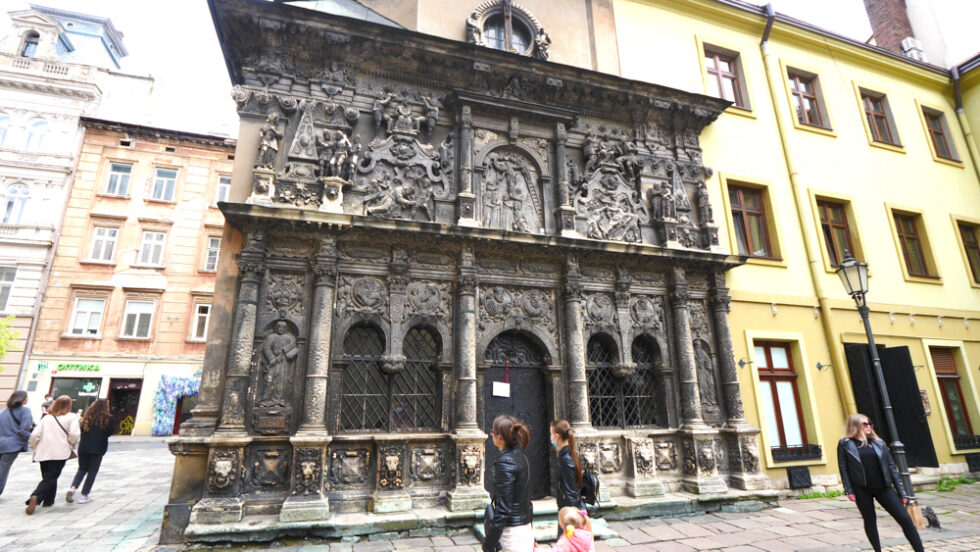 I loved the old town of Lviv, Ukraine. It reminded me a lot of Krakow in Poland. Lviv was part of a kingdom called Galicia, which included parts of Ukraine and Poland. Our first stop was the Cathedral Basilica of the Assumption, a 14th-century Roman Catholic cathedral in the Catholic Quarter. Then, we saw the Boim Chapel, a Hungarian family’s burial chapel from the 17th century.

Check out my VIDEO: Ukrainian Street Food You Must Try in Kyiv, Ukraine

Past several coffee shops is Amadeus, a VIP restaurant that sells Galician food. The building Amadeus is in once belonged to the cathedral and served as the monks’ quarters. I started with garlic toast and a crunchy European salad, followed by some homemade vodka made with honey, borscht, and Yorkshire pudding! Then, we finished up with beef roast and tender duck. 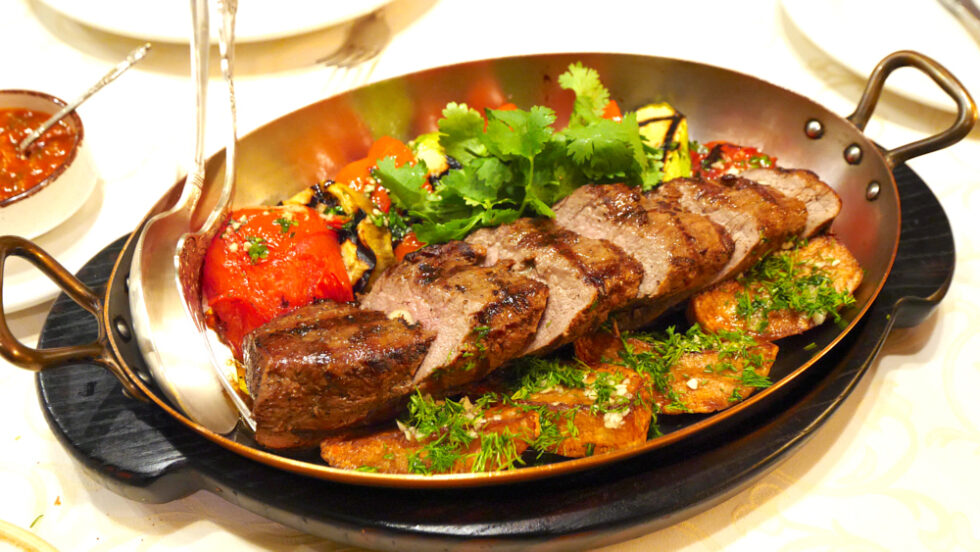 Next, we left with the owner of Amadeus and walked through the historical center to Under the Golden Star, a former pharmacy where the kerosene lamp was invented in 1853. Our first dish was a citrusy Galician cheesecake with chocolate, lemon peel, and raisins. We also had cherry liqueur in a chocolate cup, chocolate cake, a strawberry eclair, and rum balls. 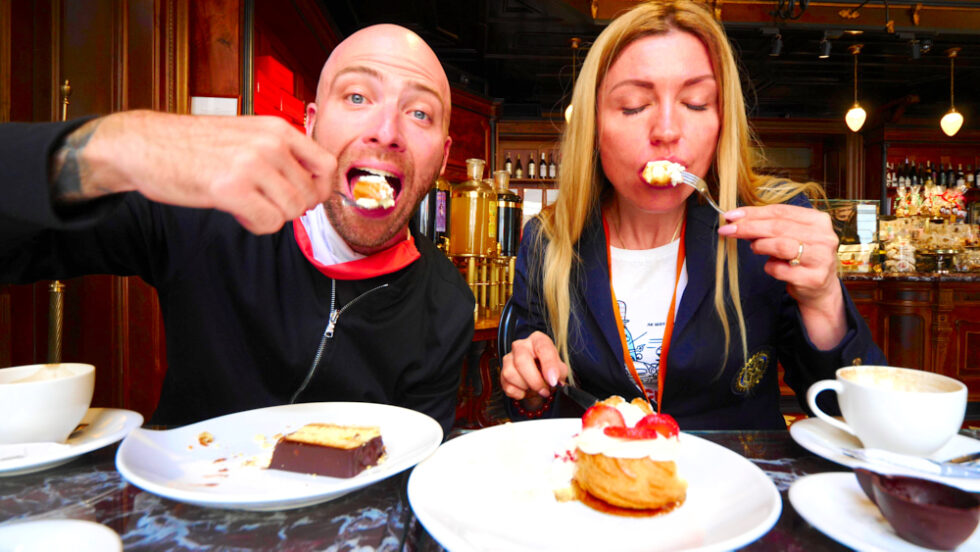 Then, we passed through Freedom Avenue near the Lviv Opera. From there, we headed over to the Vernissage handcraft market, where I bought some embroidered shirts and a carved wooden beer mug! 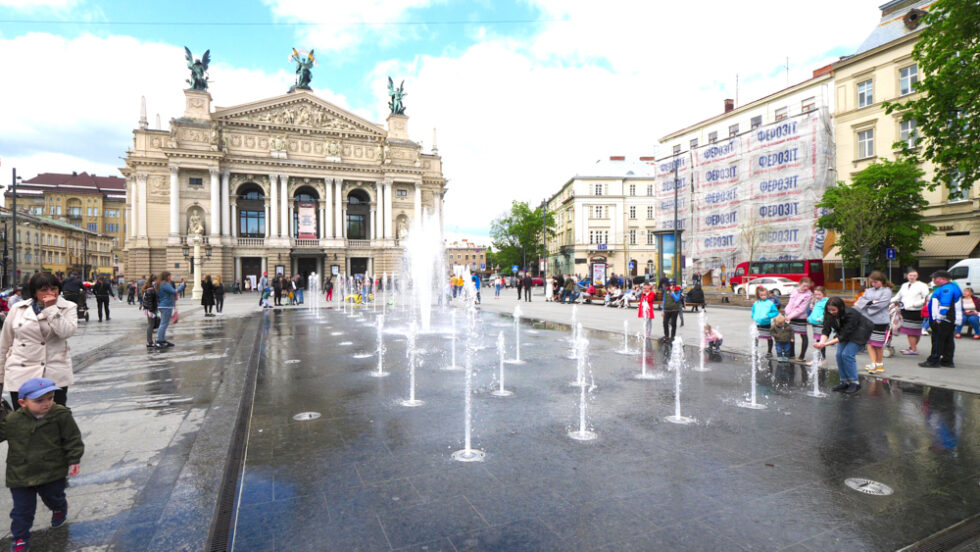 On Lesi Ukrainky Street, also known as 100 Pubs Street, we passed the Armenian Cathedral of the Assumption of Mary, which dates back to 1363. The Armenian community in Lviv dates back to the 14th century. 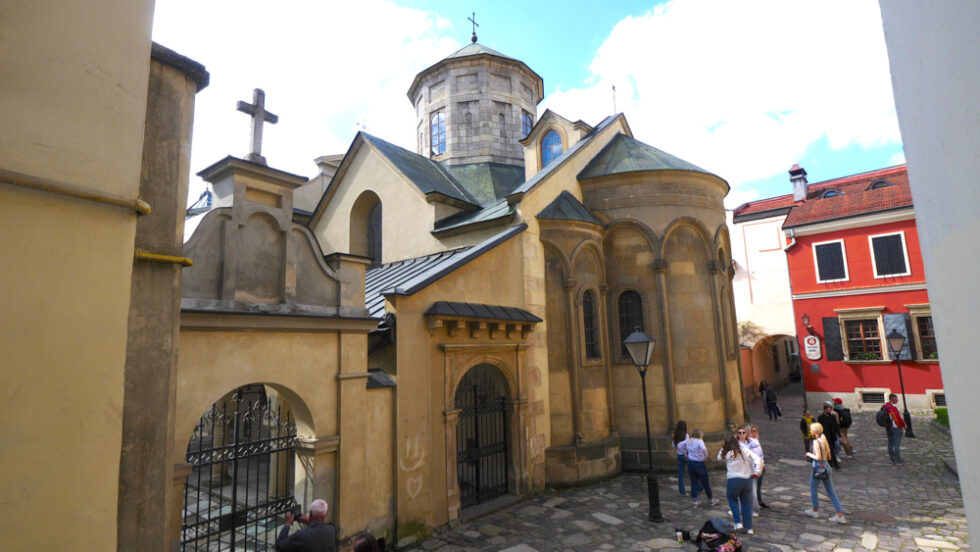 We continued on through the Old Town of Lviv, Ukraine, east of Market Square, and saw the gorgeous Dominican Church and Monastery, which dates back to the 13th century. The present-day Baroque-style church was built in the 18th century. 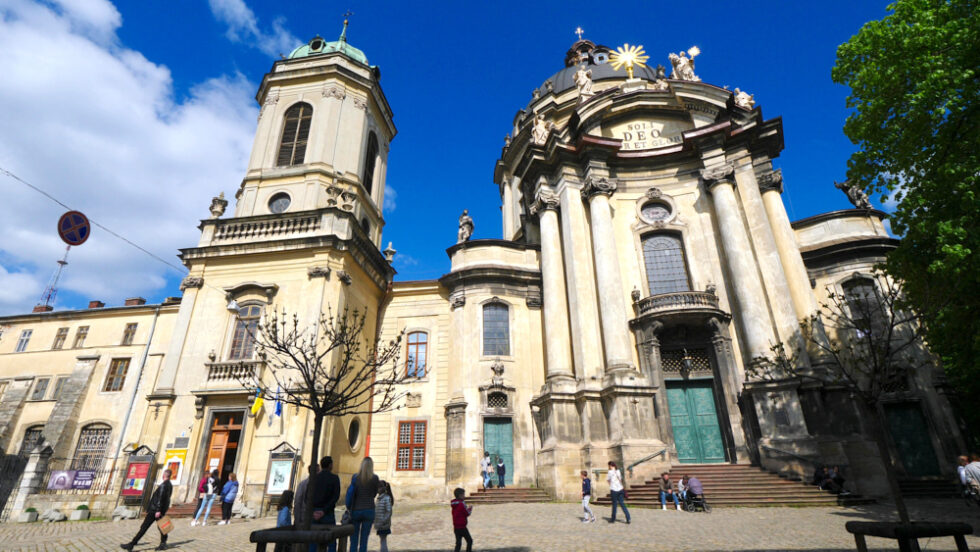 After arriving back in Rynok Square, we made it to Lviv Coffee Manufacture, where you can buy coffee and souvenirs in the first two rooms. Downstairs is where they mine coffee! I put on a hard hat as we went down to the coffee mine. They make your coffee and nuke it with a blowtorch to make the top a crispy layer like crème brulee!

From there, we saw their terrace and then headed to Lviv Handmade Chocolate. They make dozens of types of chocolate. After visiting the kitchen, I tried some hot chocolate with almond shavings on top. It was so thick, rich, and decadent! 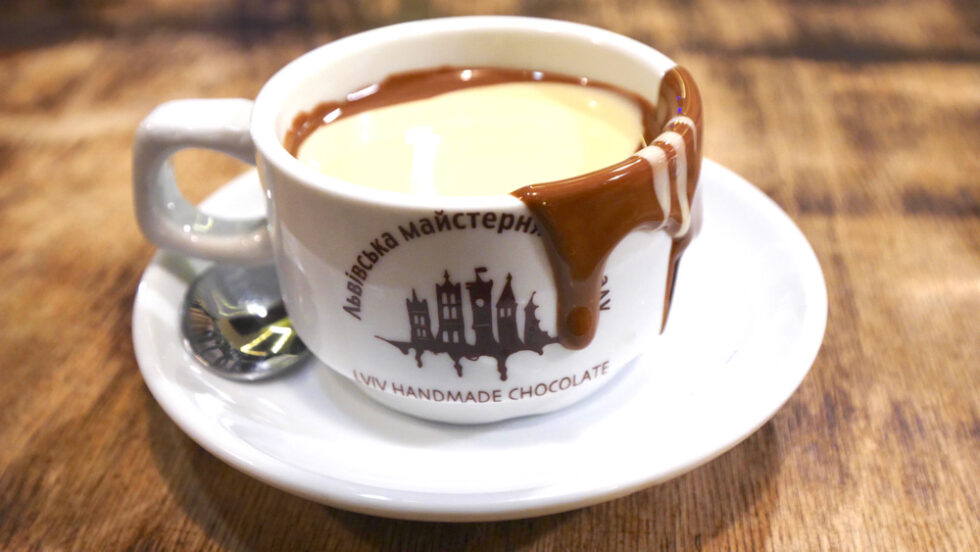 We then continued on to a masochism shop called Masoch Café, where you can buy whips, ball gags, and other sex-related items. They whip you when you go inside! There’s a hotel and coffee shop, and a lounge area for parties on the lower level. Then, we headed to Piana Vyshnia, which is a shop famous for its cherry liqueur. They have a huge red chandelier made from bottles on the ceiling! 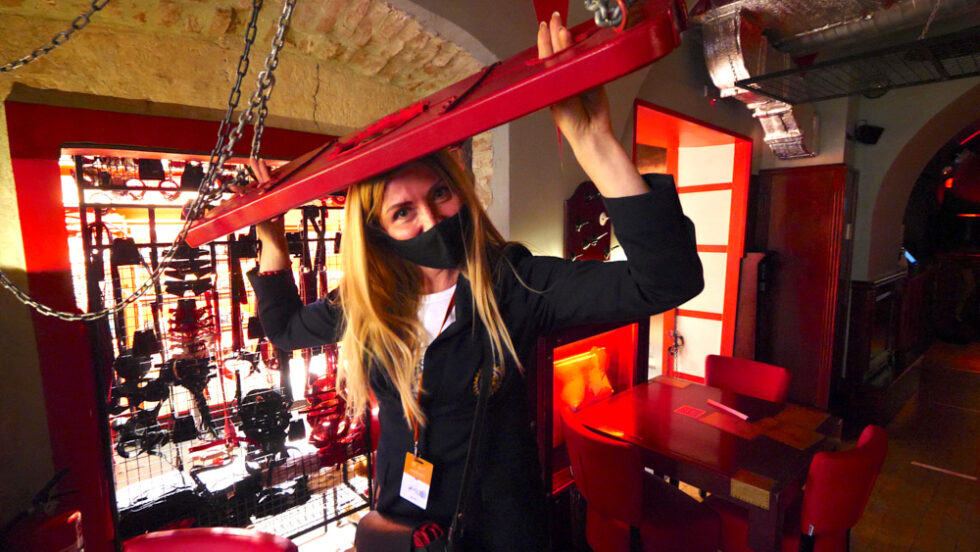 The liqueur was rich in cherry flavor. It’s the #1 drink in Ukraine after beer. I loved it! 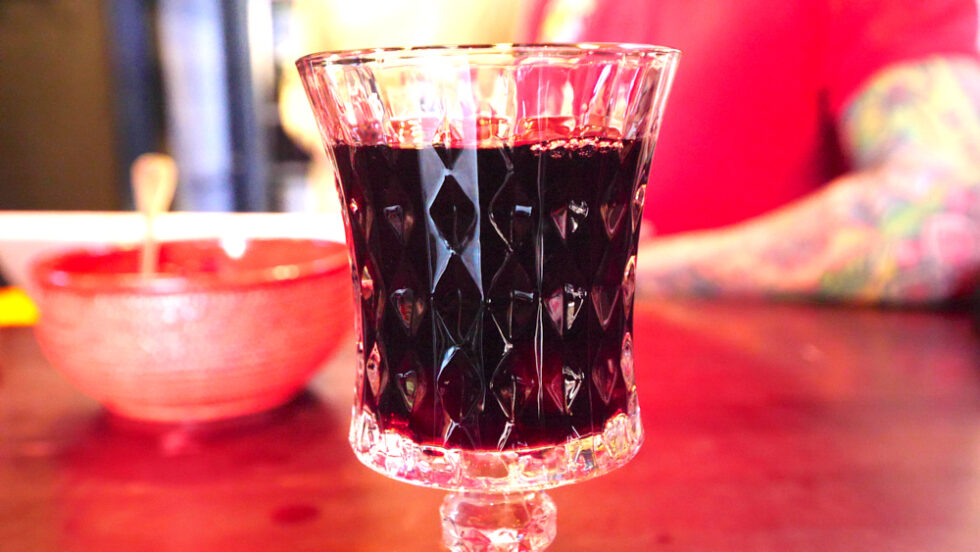 I hope you liked coming with me on my Ukrainian food tour of the Old Town in Lviv, Ukraine! If you did, please give this video a thumbs up and leave a comment below. Also, please subscribe to my YouTube channel and click the notification bell so you don’t miss any of my travel/food adventures around the world!