My incredible time in the city of Lviv in western Ukraine continued with a one-of-a-kind restaurants tour in a medieval building in Lviv, Ukraine! Come with me as I hit up three awesome spots in one building, including a mind-blowing Ukrainian World War II restaurant!

My friend and guide Diana from Tours by Locals and I started our afternoon at the former Venetian Consulate in Rynok Square. It’s called the Holding of Emotion Complex and is home to three businesses: Kryivka Restaurant, Freemason’s Lodge, and Pretty High Kitchen. 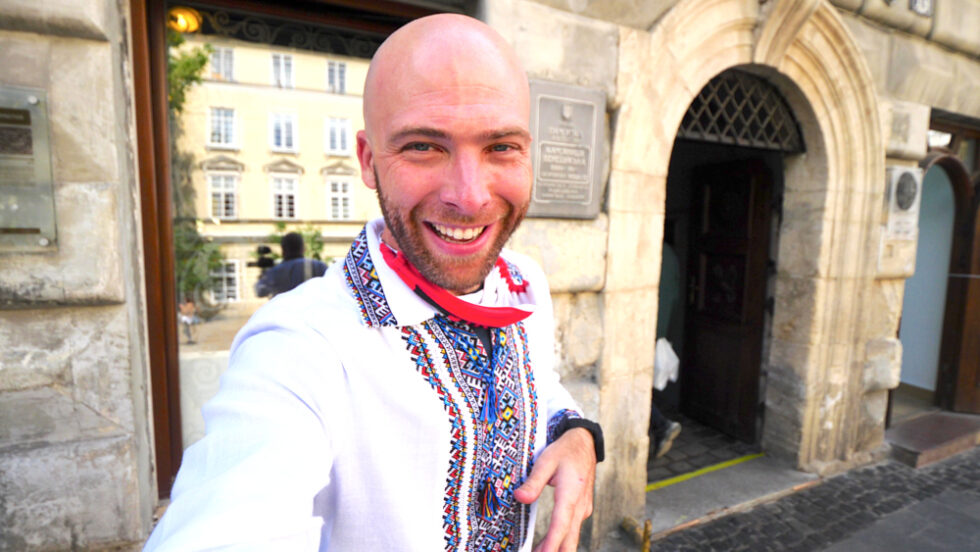 You have to know a special password to get into Kryivka, which is said to be the most-visited restaurant in Europe! Exploring the entire building is a super unique experience! The guard on the other side of the door will say the national slogan, “Slava Ukraini,” or “Glory to Ukraine.” To get inside, you must say “Heroyam Slava,” or “Glory to its heroes.” It’s the secret way sympathizers of the Ukrainian Insurgent Army proved that they weren’t Russian! 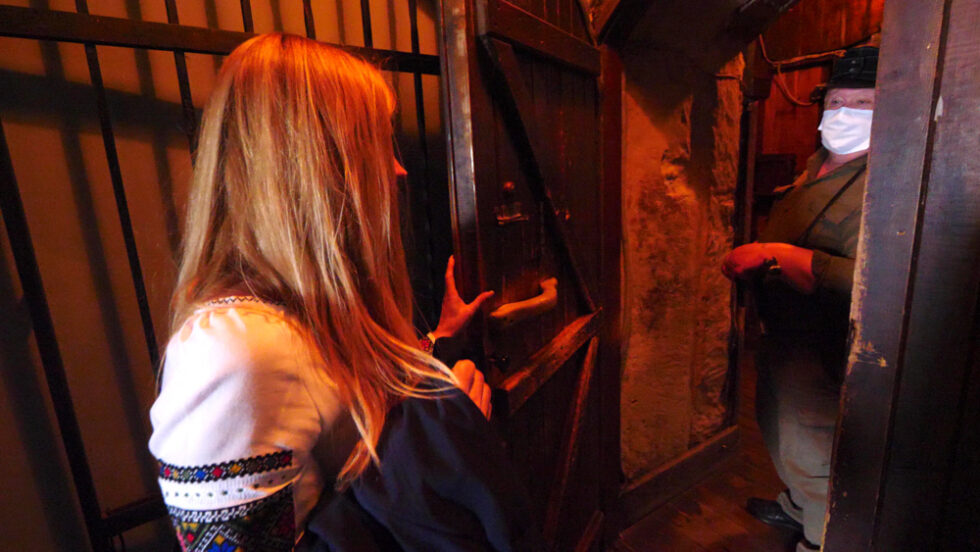 Then, you must drink the alcoholic drink the guard gives you. They say if you’re Russian, it’s poisonous to you! If you survive, you’re all good. I loved this building already! Kryivka is basically a bunker-style World War II restaurant. Ukrainian nationalists hid here from the Soviets. At the restaurant, there are displays of Ukrainian army uniforms. It’s a restaurant museum, and you can see medals, pictures of war heroes, and more.

There are also lots of guns on the walls, a cell for captured Russians, several small dining halls, and a bar. It’s really dark and immersive there. At the bar, Diana and I enjoyed some horseradish horilka and cranberry horilka. The cranberry was easy to drink, but the horseradish was scary strong! 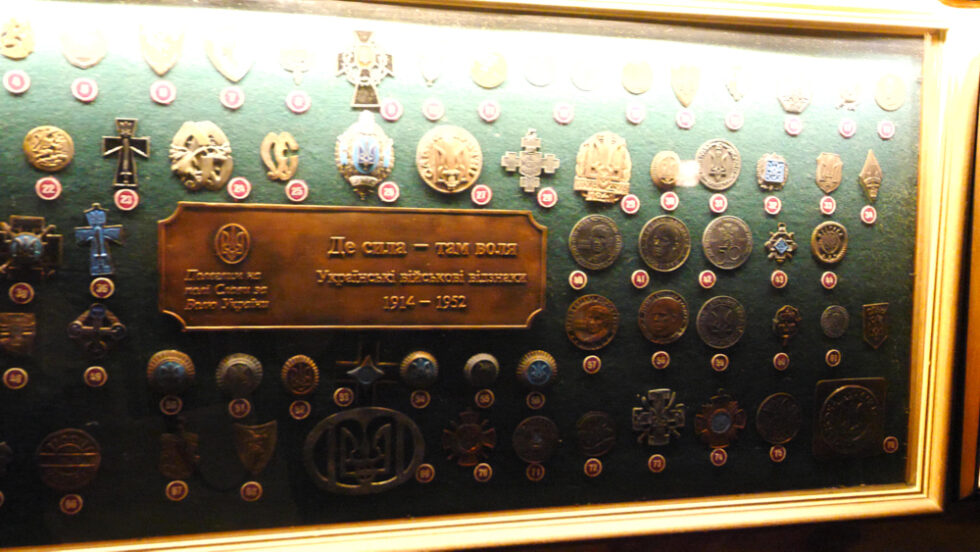 Then, we headed to the bunker where the nationalists lived and where they stored their weapons. There’s also a gift shop. They have a motorcycle you can sit in that has a gun attached to it! There are also air fighting simulations! The gift shop had lots of war-like souvenirs, like cannon figurines made from bullets, soldier dolls, wooden guns, Ukrainian flags, hats, mugs, liqueurs, pottery, and even grenades! 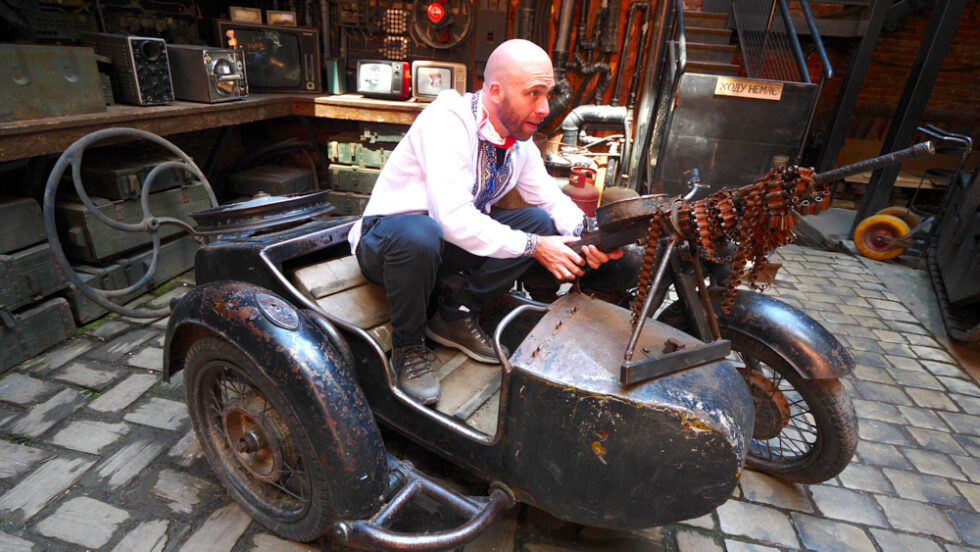 I tried on a few hats and then we headed up to the Freemason’s Lodge. There’s no sign marking it. You have to go through a test to get inside: go to the apartment of a bachelor. He has to approve of you before you can to go through to the lodge on the other side. It was so incredible! 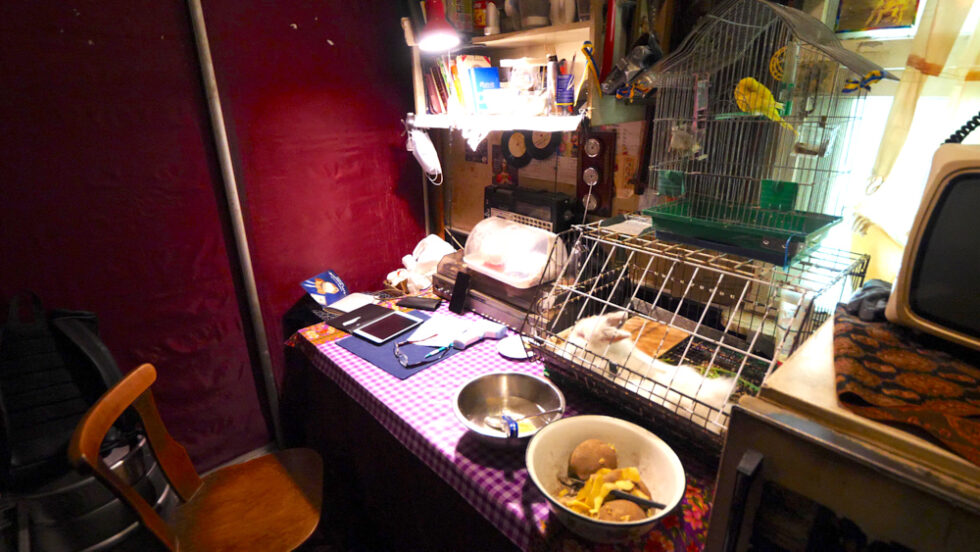 It was a tiny Soviet-era apartment with a tiny bed, peeled potatoes in the sink, and a pet rabbit. The man inside asks you how you got there. It serves as the entrance to the Freemasons Lodge. Inside is lots of Freemasons imagery, including paintings of U.S. presidents like George Washington and Abraham Lincoln, and the US dollar on the wall. The Freemasons still exist in Ukraine today!

They have Colonist wine there, which is roughly 250 hryvnia/$10 USD. There’s also a kitchen and a bar, and a sunroom. There are more pictures of 19th-century Ukrainian Freemasons and a unique BMW from the 1920s! The bathroom is plastered in money and even has money under the toilet! The menu prices are 10 times higher than anywhere else. You have to show a card to get a 90% discount! It’s the most expensive Galician restaurant in the world. 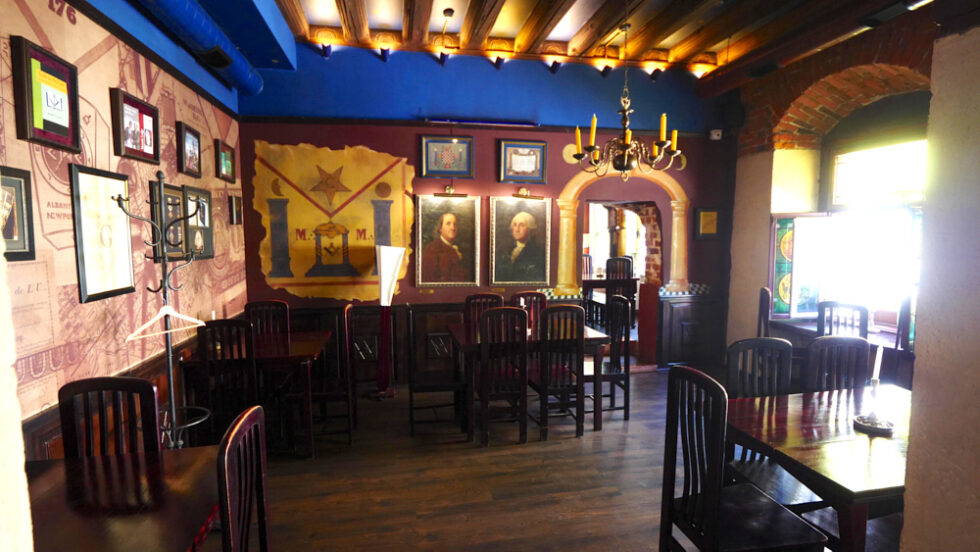 We tried some Cabernet Grande Reserve wine and enjoyed the amazing view of the city. It was delicious and felt like a Bordeaux. I learned after we left that you can even rent an apartment in the building! Then, we continued our unique restaurants tour of Lviv, Ukraine upstairs at Pretty High Kitchen for lunch! 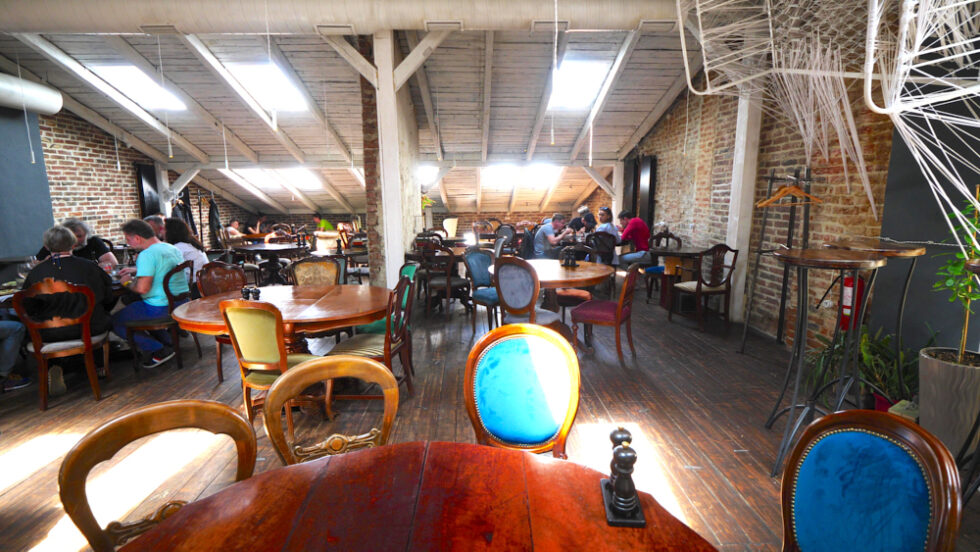 Pretty High Kitchen is large and spacious, with high ceilings and even vinyl records. There’s no menu. The chef comes to you and asks you what you like. Then, he suggests dishes for you and goes back to the kitchen to prepare it. They also ask what you want to drink. I wanted local everything!

I went with a James Bond Martini and Diana got the Violet Spritzer. My grandmother loved martinis and drank one with two olives every day. She lived to be 97! Then, my pulled pork and Diana’s sea bass arrived. I was a little buzzed. My pulled pork contained blue cabbage that I thought was beetroot at first, cheese from the Carpathian Mountains, and greens. Pork is very common and affordable in Ukraine. 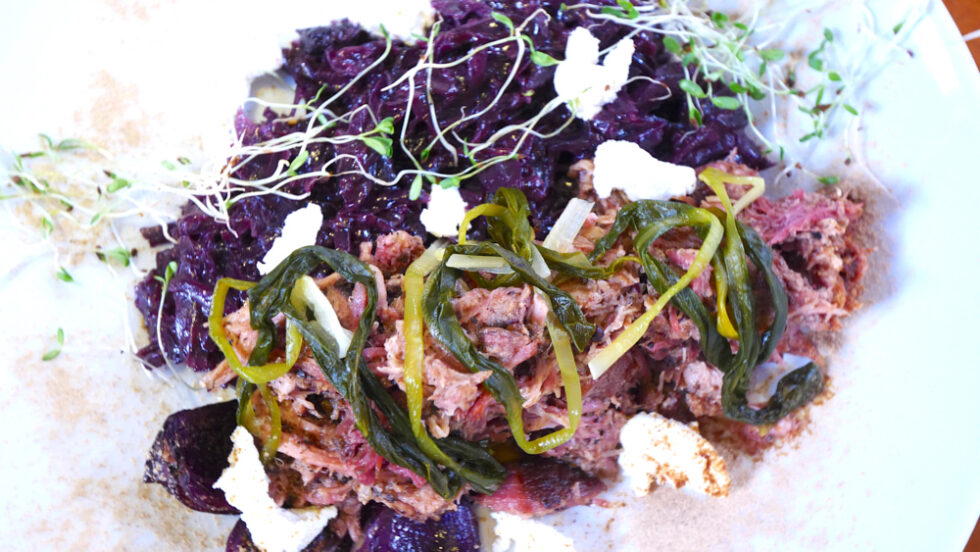 It reminded me of Texas barbecue and was so moist and juicy! The fresh ingredients were phenomenal. The creaminess of the cheese, moist pork, and crunchy beetroot were incredible. I tried a bit of Diana’s sea bass with arugula, blue cabbage, and tomatoes. I loved the cinnamon in the glazy, marinated blue cabbage! Each dish costs roughly 300 hryvnia/$12 USD each. Finally, before we left, we visited the rooftop terrace. The tables were surrounded by plastic tents. 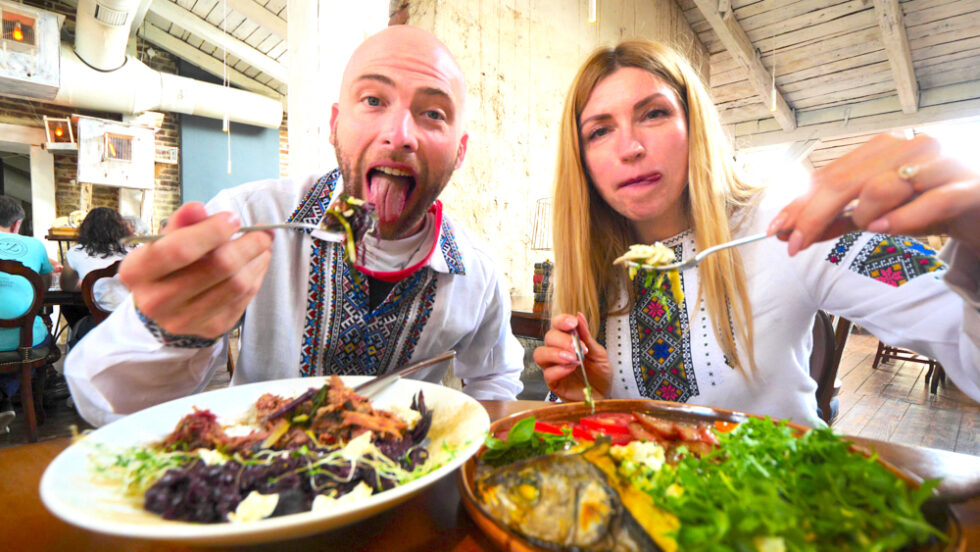 I hope you liked coming with me on my unique restaurants tour in Lviv, Ukraine! If you did, please give this video a thumbs up and leave a comment below. Also, please subscribe to my YouTube channel and click the notification bell so you don’t miss any of my travel/food adventures around the world!