As my time in the city of Lviv, Ukraine slowly wound to a close, I set out on my most unforgettable Ukrainian food adventure yet! Join me as I enjoy some insane Ukrainian BBQ, including endless pork ribs at Rebernia Restaurant in Lviv, Ukraine!

My guide Diana from Tours by Locals and I kicked off our final adventure in the city. We’d be hitting up a pair of breweries as well as Rebernia. Our afternoon began in the Austrian part of Lviv, one of the oldest municipal areas in Europe. 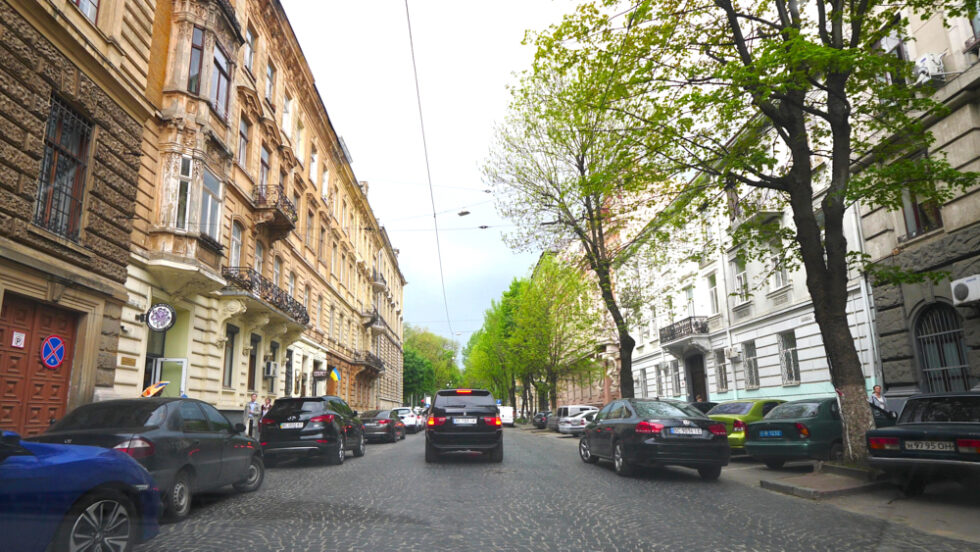 We arrived at Lvivarnia, which is both a brewery and museum. It dates back to 1715. Entry is only 150 hryvnia, or about $6 USD. The museum is beautiful and is made up of five rooms. In the first room, you get the history of beer, including where it came from and how it traveled throughout the world. In Mexico, the beer was made from maize, while in China, it came from rice! In Europe, it came from wheat and barley. 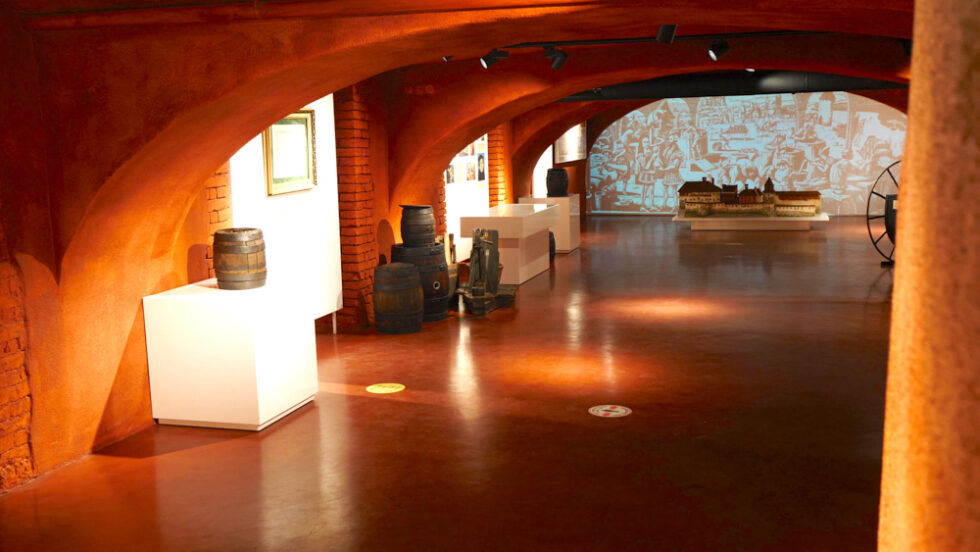 You can also learn about different guilds and craft workshops and how beer was stored and transported in oak barrels. The then-wooden city of Lviv burned to the ground in 1527 and was rebuilt using stone. The owners of Lvivarnia became Jesuit monks and the owners in 1715. After the Austrian Empire took over, a German man acquired the brewery. The final room shows what happened to the local beer when the Polish and Soviets took over. Russians who visited Lviv weren’t welcomed back home unless they brought Lviv beer with them!

Then, Diana and I headed to a large room that shows all of the beer’s ingredients, including hops, barley, wheat, yeast, and water. We could also see some of the bottling system! In the taproom upstairs, we got a flight of Lviv beer: Classic, Unfiltered, Brown, and Dunkel. The Classic was a crisp Pilsen, while the Unfiltered was more wheat-like. I loved the Brown, which had notes of a sweet warming spice, and the Dunkel was chocolatey, like a cross between a brown and a porter. 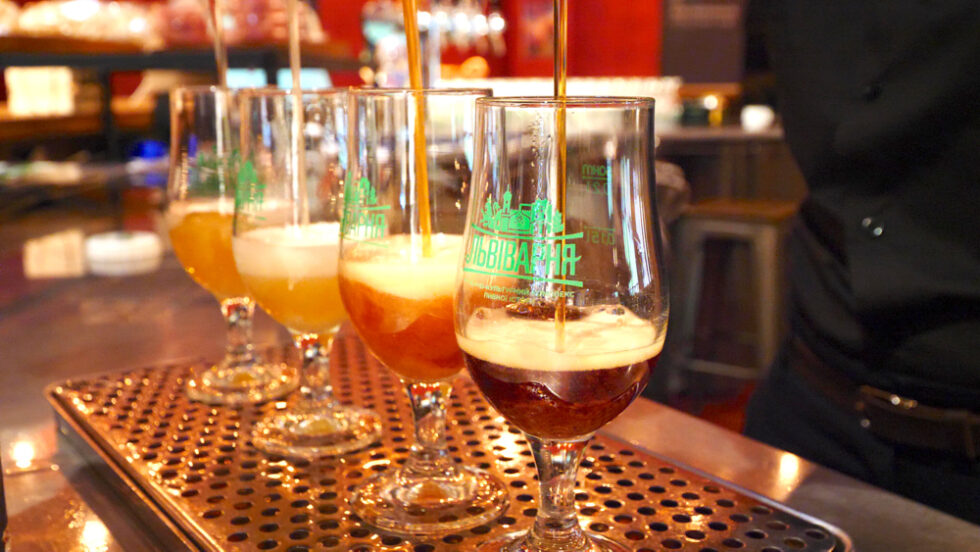 Then, we headed back to the city center to get to Rebernia Restaurant. It’s where most of the restaurants and attractions are. We got out and walked past a 16th-century gunpowder tower that stored gunpowder during wartimes and grains during peaceful times. Its base is nearly 3 meters thick at the base! There’s history everywhere in Lviv! There’s a reason why it’s a UNESCO World Heritage city! 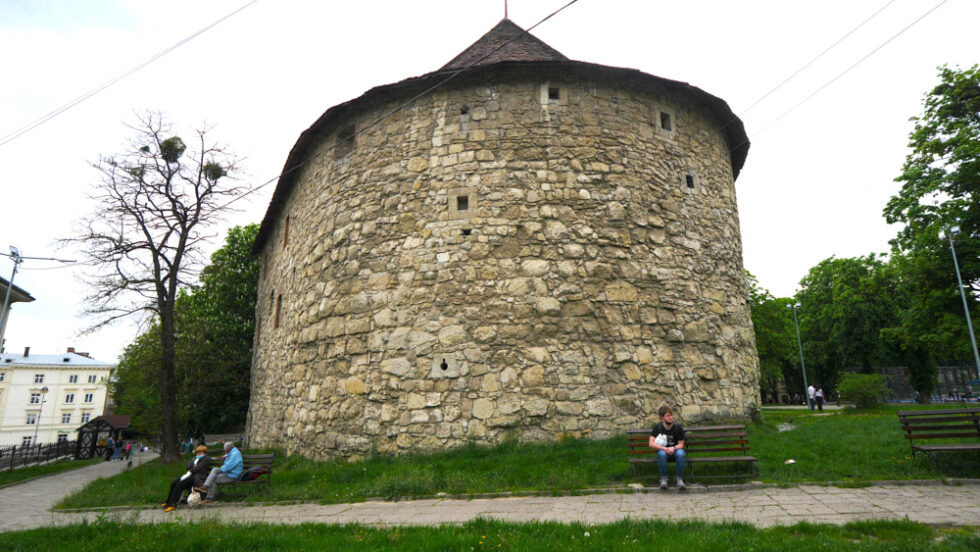 Finally, we arrived at Rebernia, where I’d get to have Ukrainian BBQ for the first time in Lviv, Ukraine. It’s a very popular spot, so there was a long queue outside. As VIP guests, we were able to skip the line and went straight inside. Inside are two massive rotating grills that they pack with ribs. They sell over a ton of ribs per day!

They give you paper bibs with a skeleton on it. They don’t give you cutlery or plates. Instead, they set your food on the board it’s served on. Our rack of ribs came with two dipping sauces. I loved the smoky flavor and the juicy, fatty texture. There was also a nice glaze on them! 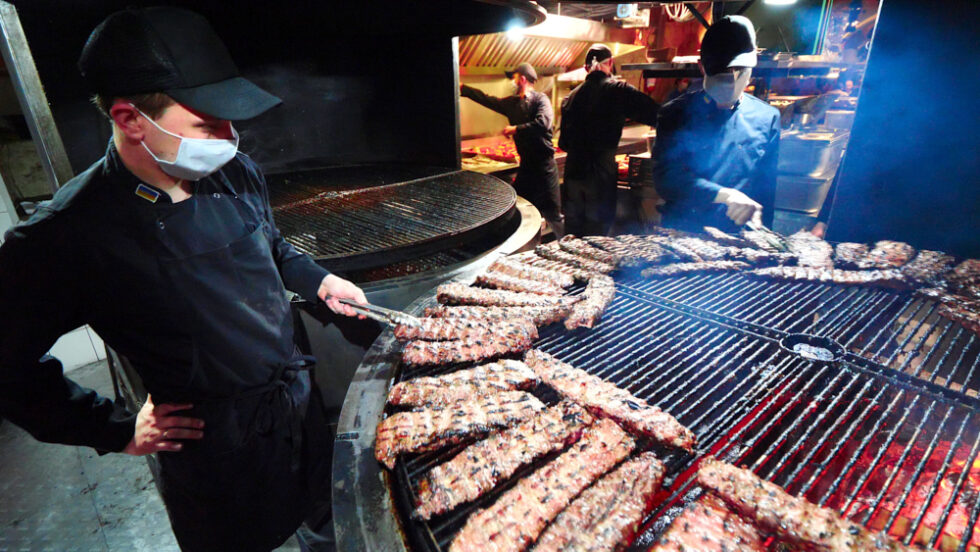 The barbecue sauce was incredible. I felt like I would fall into a food coma soon! I also really liked the honey mustard. The entire place was packed and nearly everyone was eating ribs. They also sell steaks, burgers, grilled and pickled vegetables, potatoes, and mackerel. It was such a fun experience! 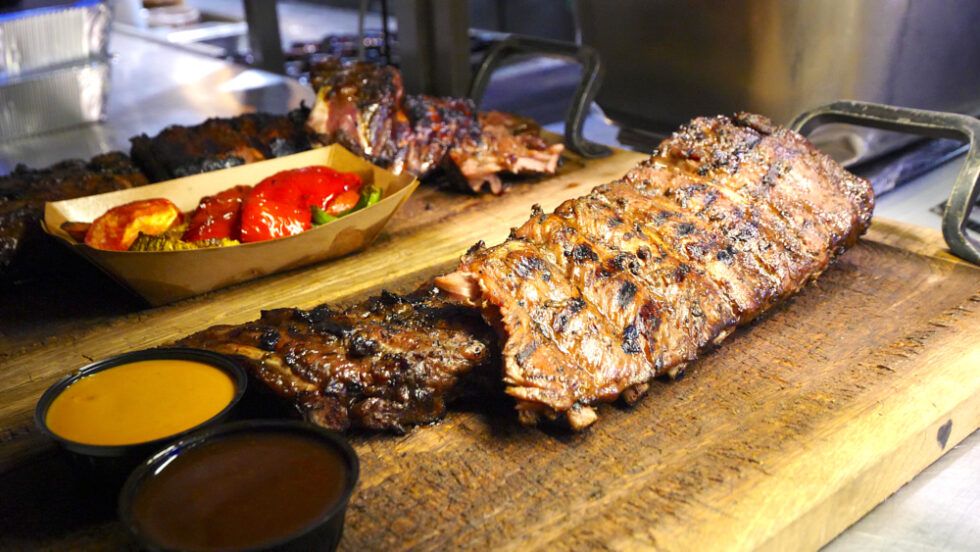 The stout I enjoyed with the ribs was fantastic. Then, I headed into the kitchen to see the veal, ribs, burgers, and more being cooked! Best of all, it’s a casual restaurant. If you go there wearing a tie, they’ll cut it off your neck and hang it from the chandelier! 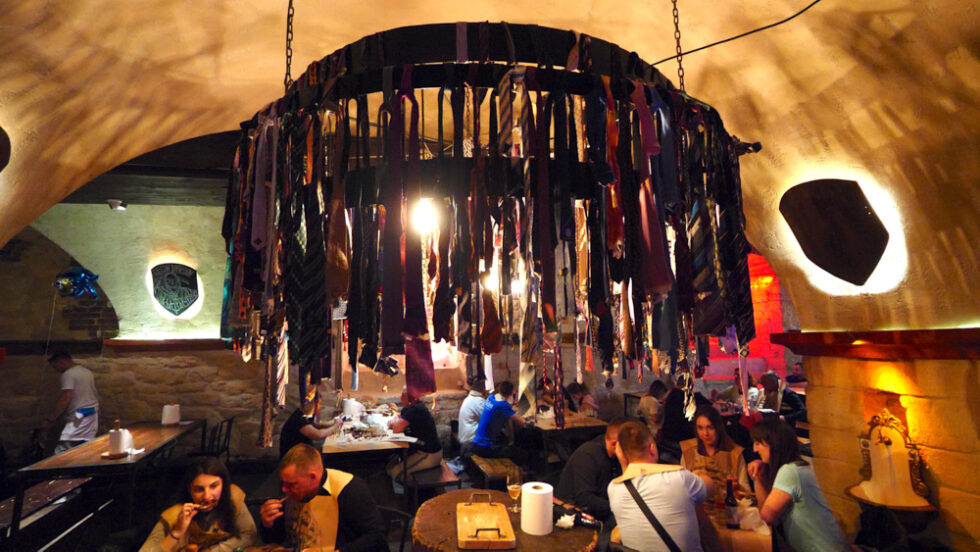 Next, Diana and I headed to the gift shop before leaving. We passed the city walls on our way into the Jewish Quarter. We saw the Church of St. Andrew, which was built in the early 17th century. Prayers were in session.

Through the Hlyniany Gate is an artist playing music. It’s the eastern gate, which survived 300 sieges in its history! Then, we arrived at Kumpel Brewery. There’s a bust of a naked woman inside. You have to massage the breasts if you want to drink beer! 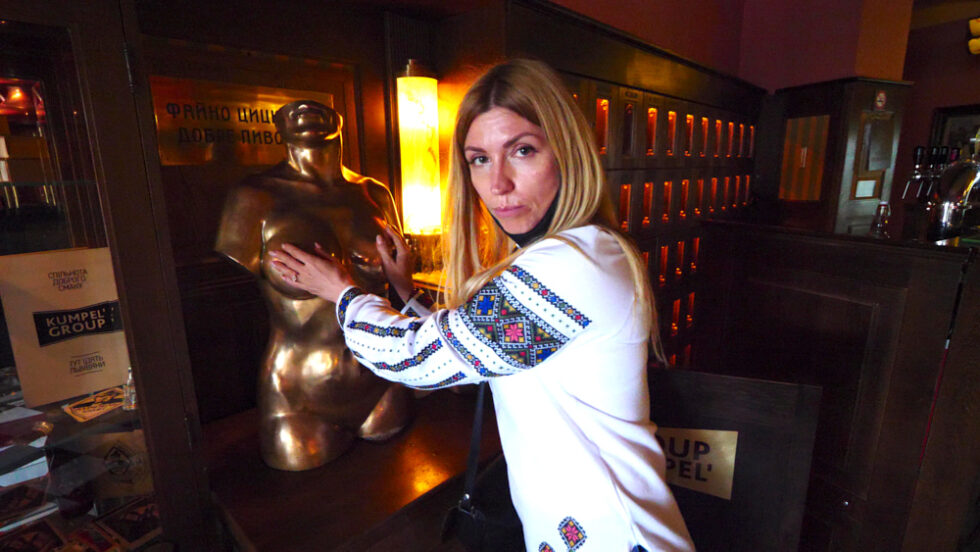 Further inside, we saw their fermentation tanks. They make two beers there: an amber and a lager. Their main facility makes 12 beers. We’d be trying some beer and food! The amber was really nice! We then headed down to the basement to get beer directly from the tanks. It’s the freshest beer you can get! I could smell the hops down there! 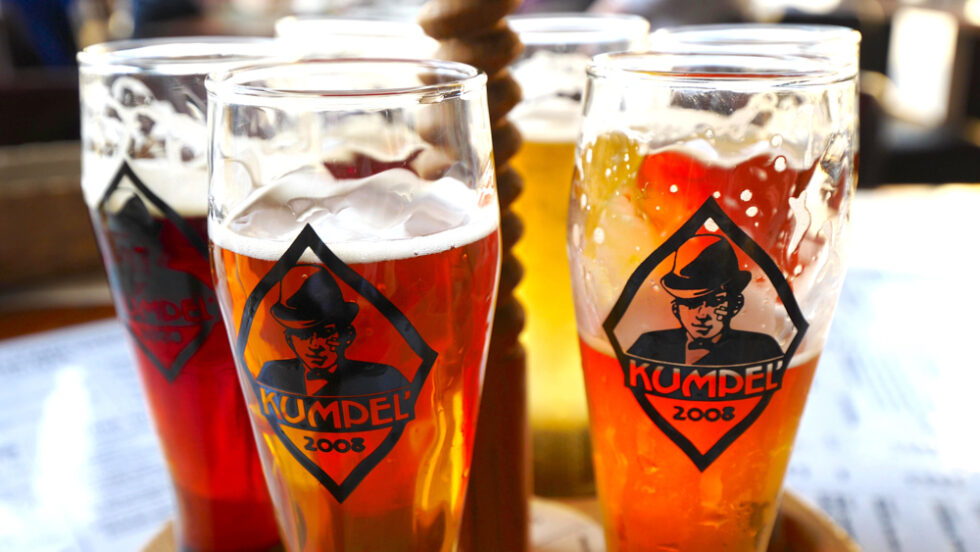 Our beers had a lot of foam, so we took them upstairs and let them settle. We also ordered lamb vareniki, cream of mushroom soup, and banush. These dishes are from the Carpathian Mountains. In addition to our amber and lager, we also had a unique amber/lager mix, a light bronze ale, a tasty golden ale, and a Gold/Bronze mix.

The cream of mushroom soup took me back to my childhood, when my Hungarian grandmother would make dishes like this! The wild mushrooms were so earthy and the soup itself was super creamy. Next were three types of banush: banush with bacon, classic banush with cheese, and pork rind banush with cheese. We also had lamb vareniki with sour cream and mushroom sauce. It was Galician cuisine at its finest! 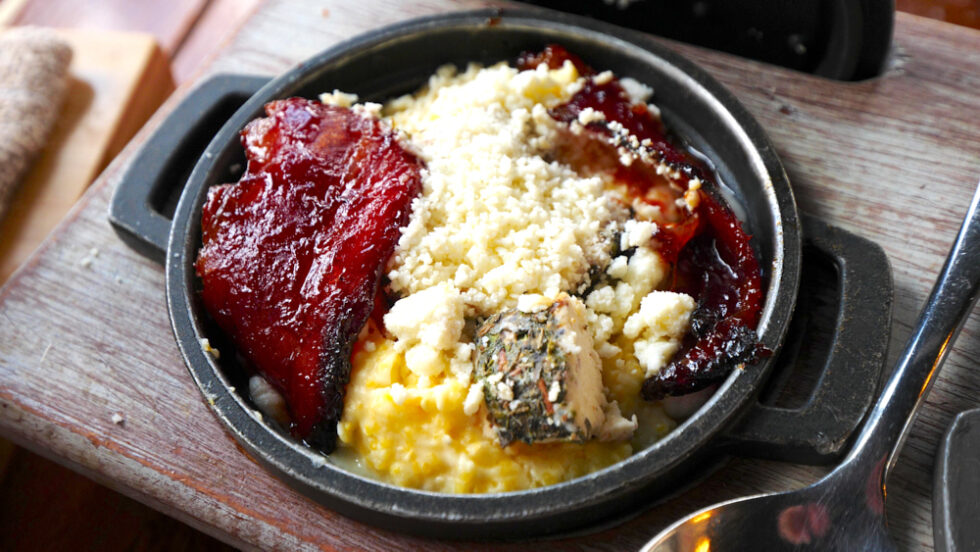 The lamb vareniki was spicy and blew me away! The mushroom sauce really changed up the flavor. The banush was also incredible. It was like polenta and was so tasty. The food, especially the Ukrainian BBQ, in Lviv, Ukraine was different from Kyiv and was unbelievable! 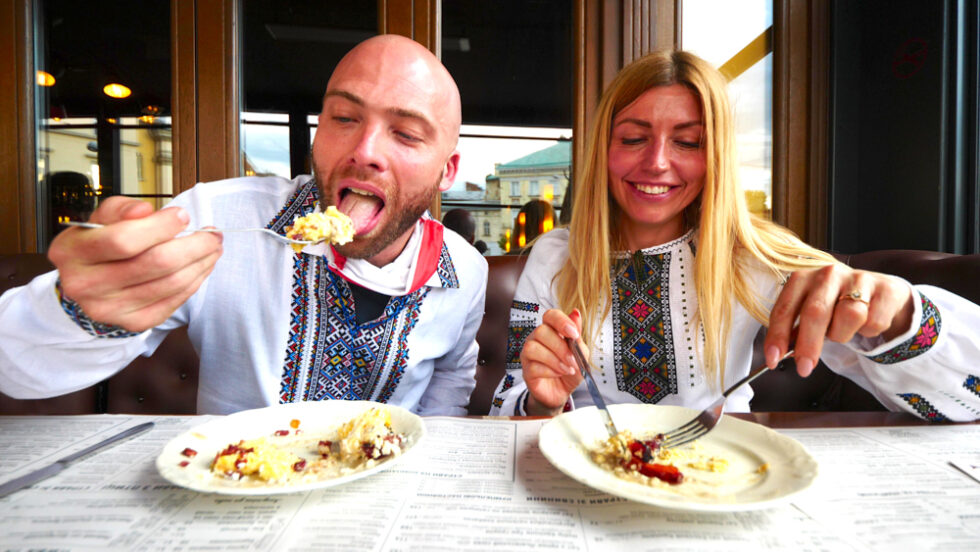 I hope you liked coming with me for Ukrainian BBQ in Lviv, Ukraine! If you did, please give this video a thumbs up and leave a comment below. Also, please subscribe to my YouTube channel and click the notification bell so you don’t miss any of my travel/food adventures around the world!