My adventures in Ukraine continued in the city of Mukachevo! Join me as I take you to have medieval Ukrainian mountain food of Transcarpathia and check out the attractions in Mukachevo, Ukraine!

My evening began with my guide Diana from Tours by Locals in the beautiful Transcarpathia Region of southwestern Ukraine, which is right on the border with Slovakia and Hungary. The town of Mukachevo dates back to the 9th century and the castle there was built in the 14th and 15th centuries! 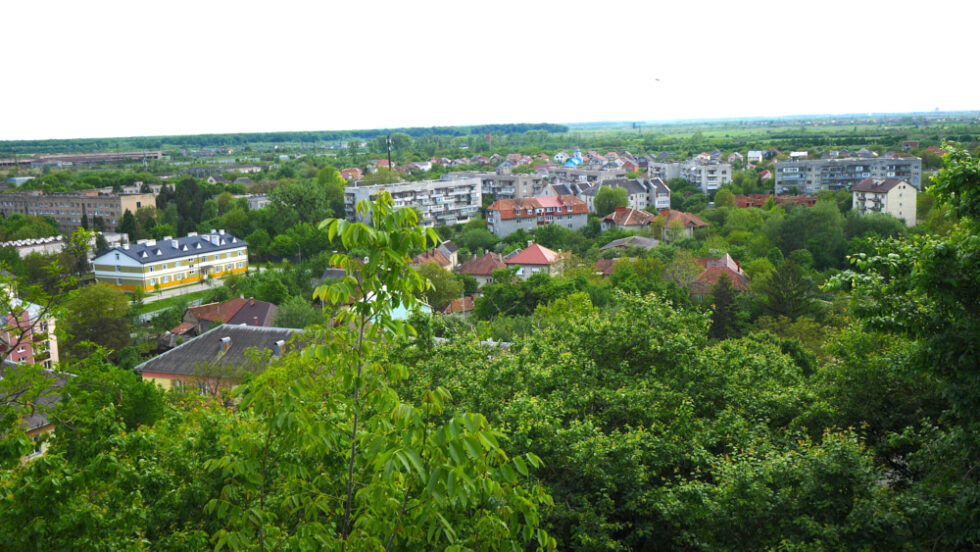 Our first stop was Palanok Castle, also known as Mukachevo Castle. It’s located atop a volcanic hill and has 3 parts: the low, middle, and high castle. It’s a prominent military and architectural site in the country, as it was built where ancient trade routes and military routes met. 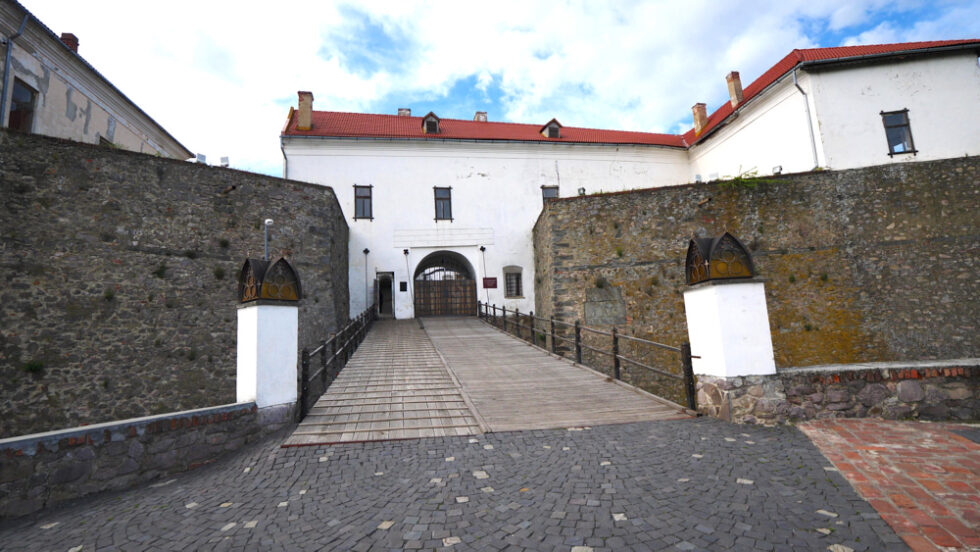 It costs 50 hryvnia, or just $2 USD to enter the castle. It started off as a small wooden structure in the 9th century. In the following century, the area belonged to Hungarian tribes. Through the gates is a sculpture of a Celtic farmer holding wheat and a Celtic cross. 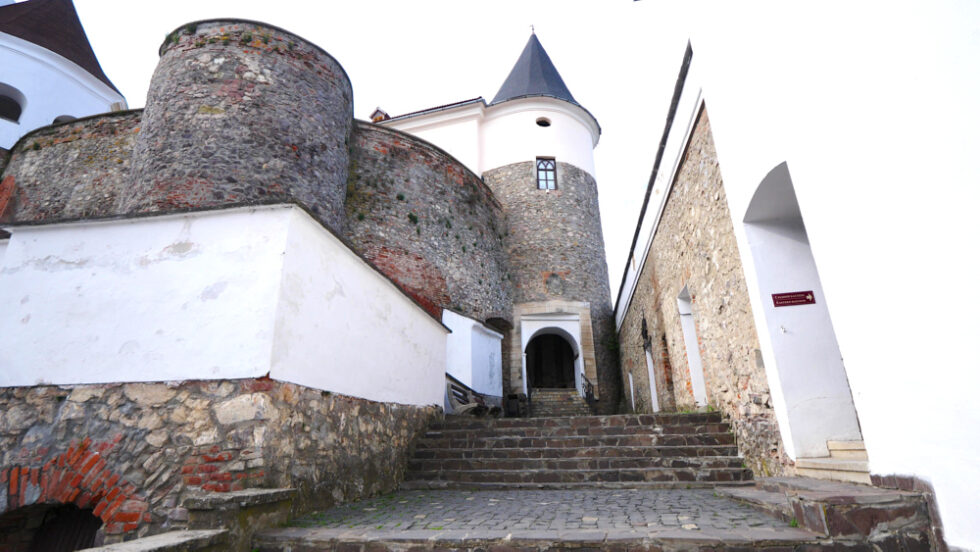 There are an inner and outer gate in-between two moats. The oldest part of the castle is all stone and reminded me of castles I’d visited in Germany. There is an Eastern Bastion, a cannon, and a torture chamber in the lower castle. In the upper castle is a statue of a prince, the first owner of the castle in the 14th century. Grabbing his finger is good luck!

In the Historic Exhibition are metal, stone, and clay items excavated by archaeologists. I could see arrows and tools used for farming, as well as locks, jewelry, and more. You’ll learn about the history of the area dating back to the Neolithic Period through maps, photographs, and plaques. 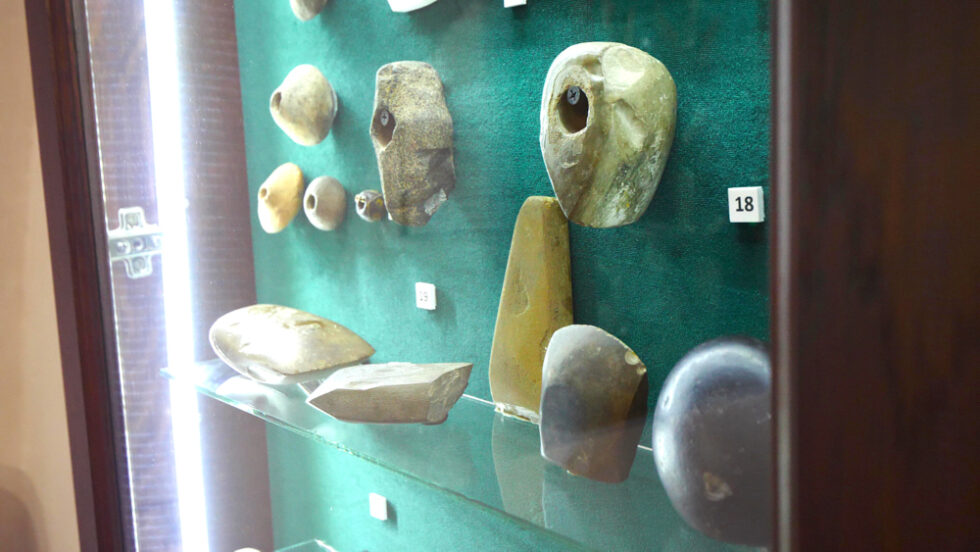 Outside in the courtyard is the castle water well. There are other exhibitions there as well, but they were starting to close as it was late in the afternoon. Then, I visited the souvenir shop, where you can buy decorative plates, beads, shot glasses, a medieval gauntlet, mugs, magnets, and more. 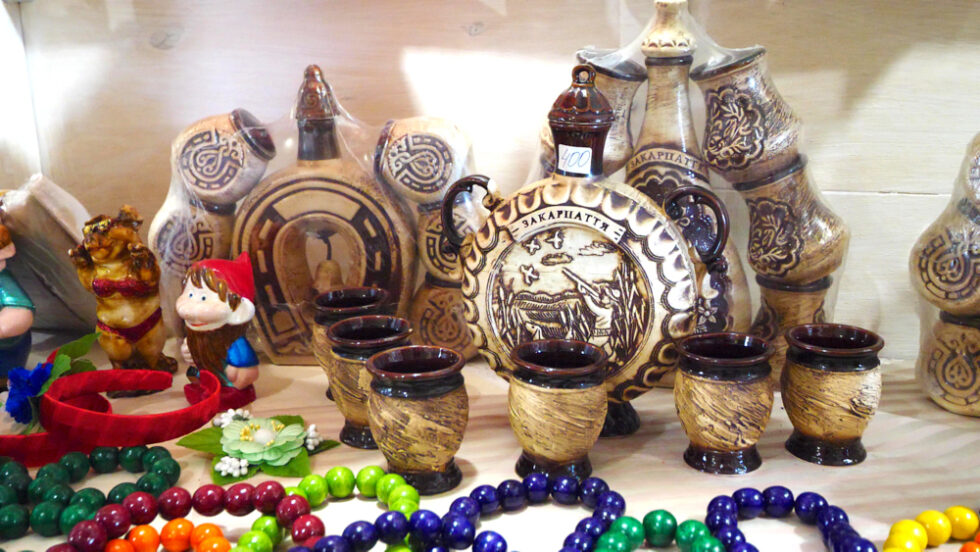 From the castle, we drove two minutes to the city center. It’s really pretty and colorful. There are lots of coffeehouses, monuments, a promenade, a church, and the city hall there. We saw a monument dedicated to the two men who invented the Cyrillic alphabet. 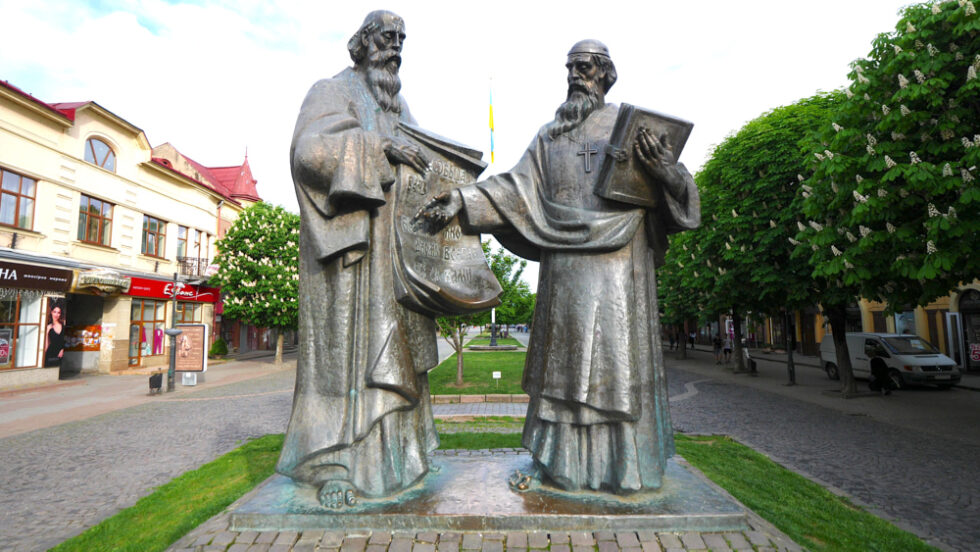 The promenade is lined with coffee shops, restaurants, and vendors. We saw the Roman Catholic Cathedral of St. Martin before heading back to the city hall. Then, it was time to eat some Transcarpathian cuisine at Poryadniy Gazda, a restaurant near the castle whose name translates to “a decent host.” 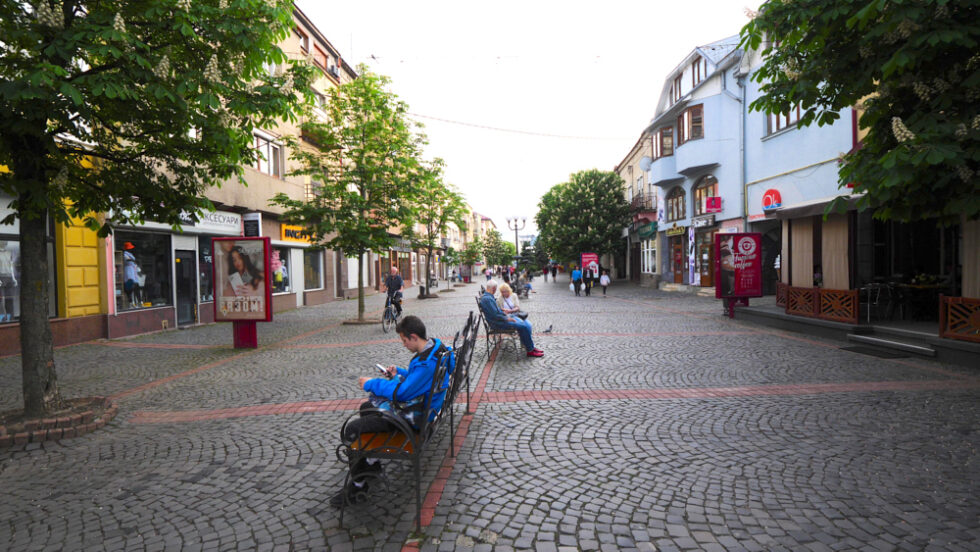 The restaurant is a big complex. Inside, I tried a crunchy, freshly baked cheese waffle. I could also see sausages in a case and lots of cheeses! In the dining area, we had a VIP table. It felt like we were in a giant tent because of the cloth draped across the ceiling. Along the walls are shelves full of jars of pickles!

I started with some coffee cream beer and some of their homemade vodka. The berry vodka tasted a bit nutty, and the manager invited me into the kitchen, and then we checked out the brewery inside the restaurant! They even have a pond where the owner’s grandson was fishing! About 80% of everything there comes straight from their farm. The cheese, sausages, and beer are all made on-site! 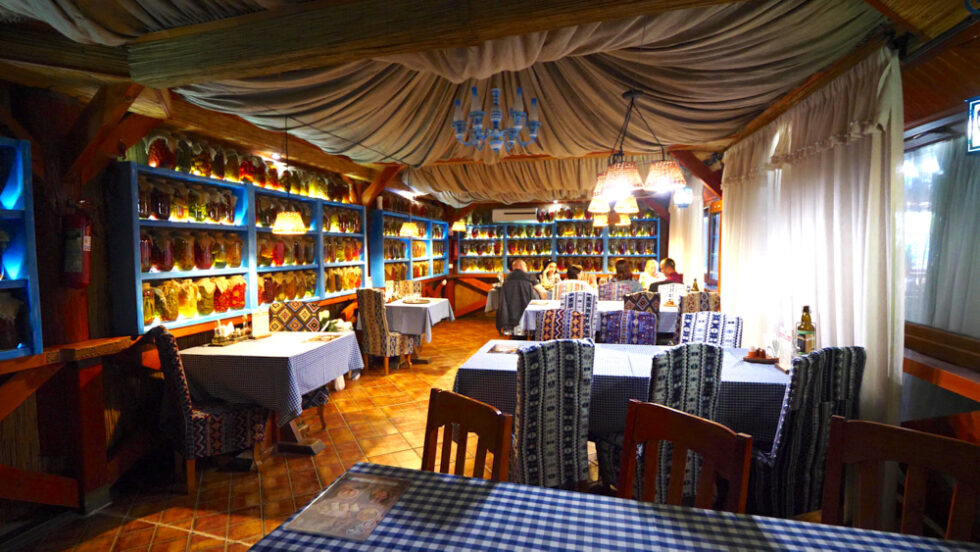 The on-site brewery makes 6 types of unfiltered beer. Their 4% blonde ale had a wheat-like flavor and was super cloudy. The lager was nice and crisp, and their golden ale was fruity and creamy! Their Witbier was so creamy and light. 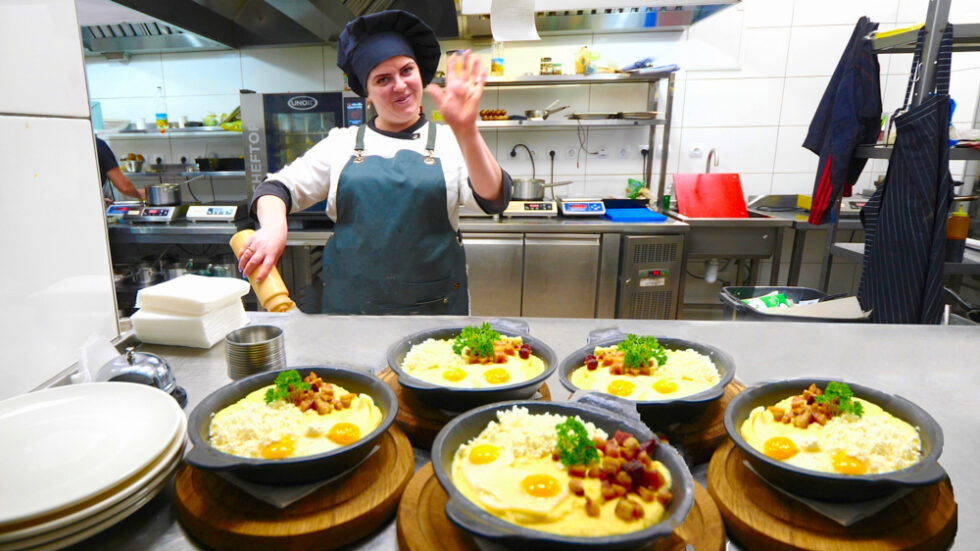 Then the owner and brewmaster, Michael, gave me an apron and let me pour my own Coffee Cream Beer from the tank for dinner. This was such an incredible experience and one of my favorite restaurant experiences in Ukraine. What a hidden gem in Ukraine! 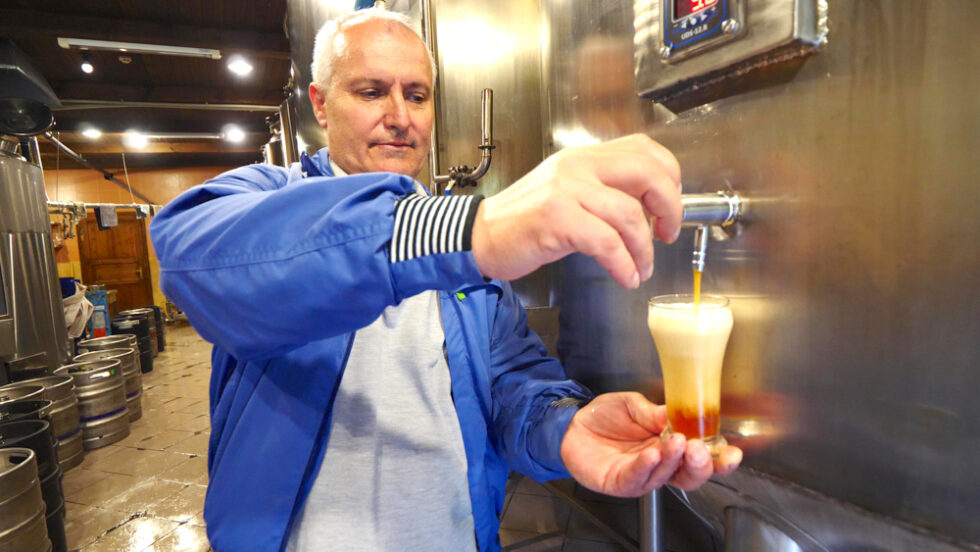 At my table, I had bohrach (a pork rib stew with carrots and potatoes with pickles and chili flakes on the side. We also had Transcarpathian pork sausages, bacon, baked potatoes, and fried onions. The bohrach was so meaty, tasty, and fatty! The ribs fell right off the bone. Then, I added the chili flakes for some added heat. It was such a hearty winter soup and so good I had to drink the broth. 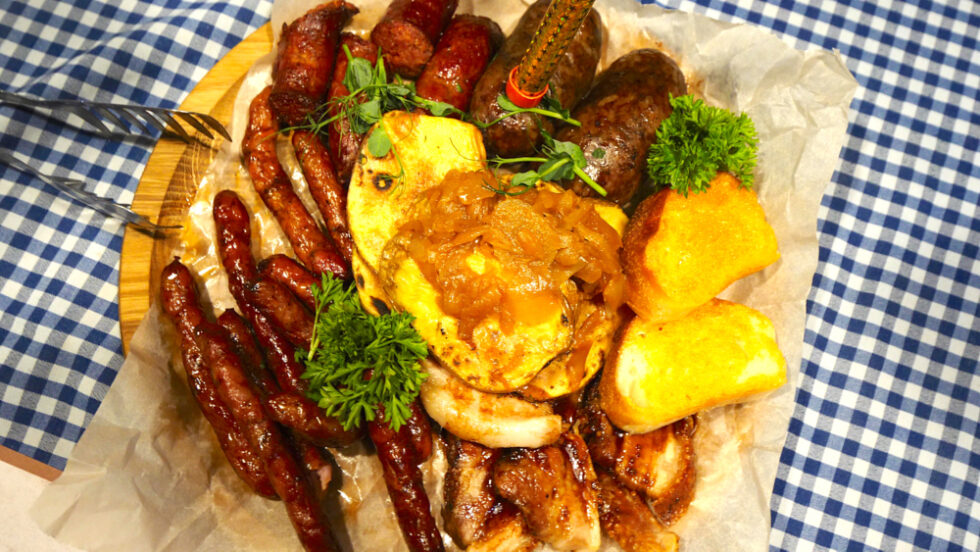 The sausages were super juicy and thin, and so tasty. Next was blood sausage containing a bit of rice, which was very soft and fell apart! The pork belly had a glazy sauce on it, and the smoky sausage was also really nice!

The baked potatoes with cheese were also really nice, as was the buttered toast, which felt like it had been infused with pork fat. Then, I tried a cheese platter with jam! It was super fresh. I had white cheese, cheddar, and more. It was so sweet! Meanwhile, the cream ale was very creamy and a fantastic dark unfiltered beer! 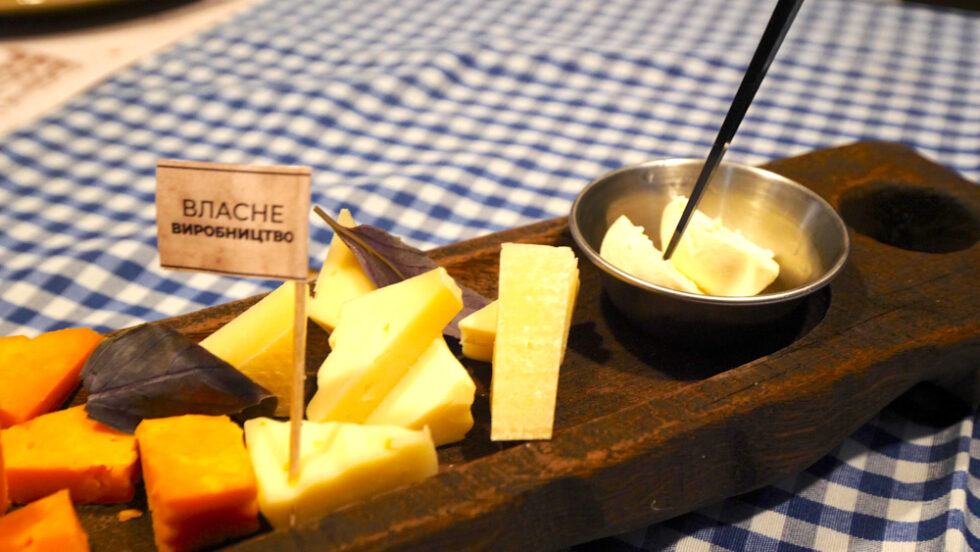 From there, Diana, Michael, and I headed down into the cellar, which was freezing. They had lots of jars of pickles and a six-year-old bottle of beer. It’s exclusive and was made for a beer festival. It has 4 times the amount of malt and its flavor changes every year! It was like a delicious brown ale. What an incredible day. Michael is such a character and so fun and hospitable. You have to meet this guy when you explore Transcarpathia and its attractions in Mukachevo, Ukraine! 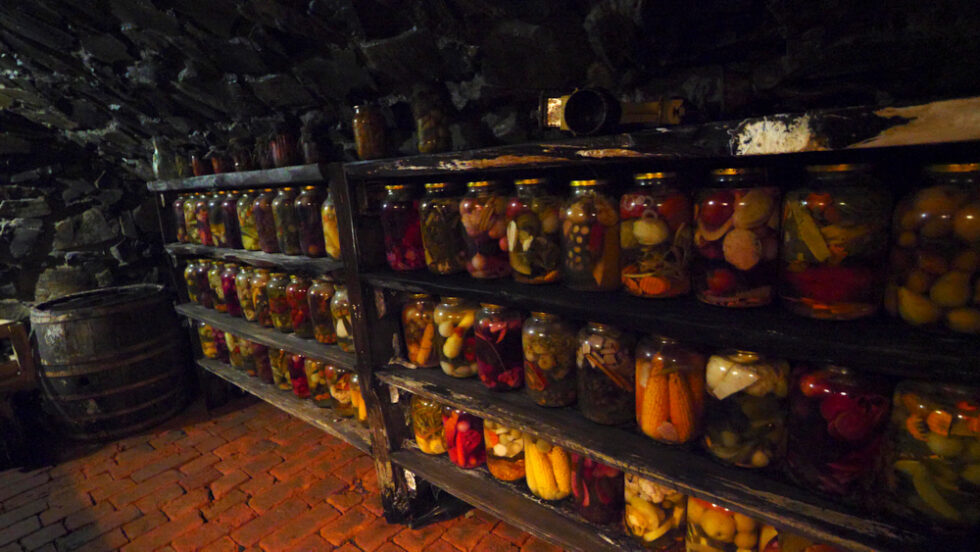 I hope you liked coming with me as I explore Transcarpathia and its attractions in Mukachevo, Ukraine! If you did, please give this video a thumbs up and leave a comment below. Also, please subscribe to my YouTube channel and click the notification bell so you don’t miss any of my travel/food adventures around the world!