My once-in-a-lifetime Ukrainian road trip continued in the city of Uzhhorod, Ukraine in the Transcarpathia Region. Come along with me as I go on an epic Hungarian and Ukrainian food and attractions tour in Uzhhorod region of southwestern Ukraine!

Uzhhorod is the capital of Transcarpathia, the southwestern-most oblast (region) of Ukraine. It’s very close to the Ukrainian/Slovakian border. Romania and Hungary are also very close by. 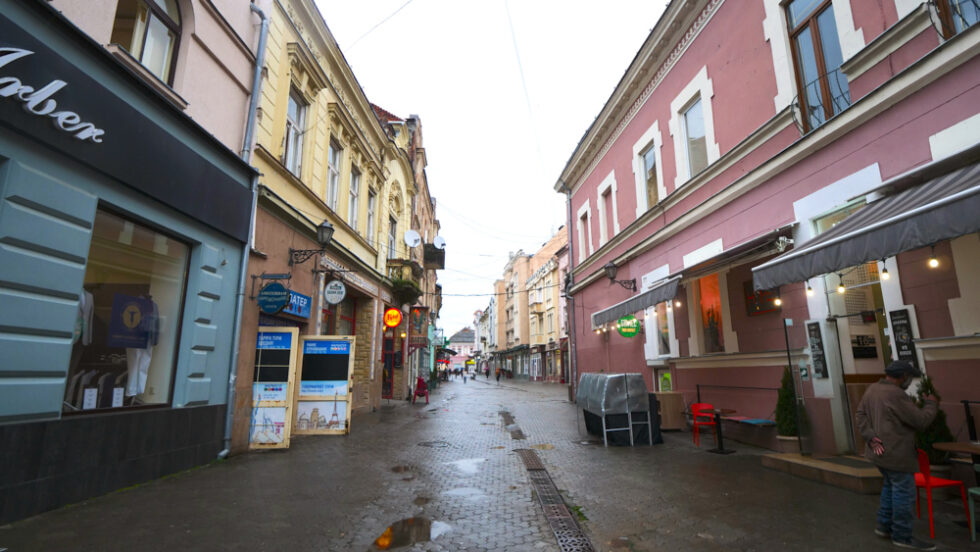 My guide Diana from Tours by Locals and I started our adventure at Uzhhorod Castle, which is also a museum. There are also wine tastings and a restaurant there. It’s different from the castle I visited in nearby Mukachevo, which has many layers. This castle is surrounded by a wall and contains a church and a palatial residence. 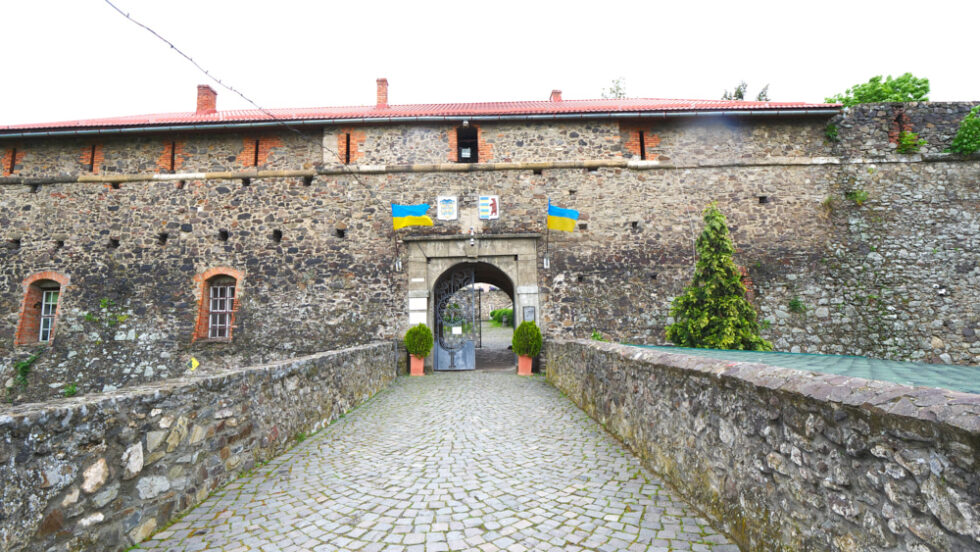 Near the palace are a huge map of Transcarpathia and a park with lots of monuments. Inside the palace is a museum. Inside are carvings from the Gothic church of St. George and archaeological findings. 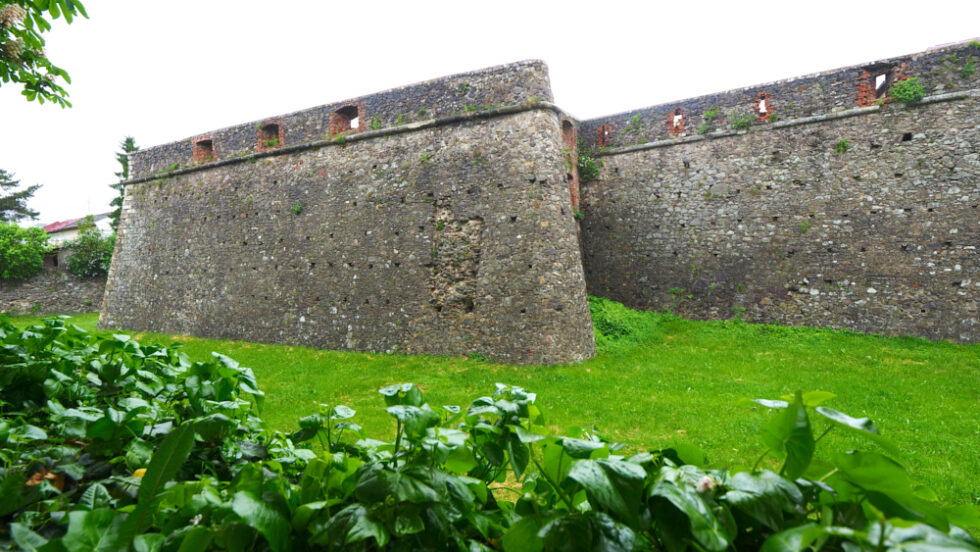 Further on, we saw the weapons room, where swords, armor, guns, and maces from between the 16th-20th centuries are displayed. They also have a sabre of a Polish king from the 16th century and a room full of cast-iron relics from the 19th century. 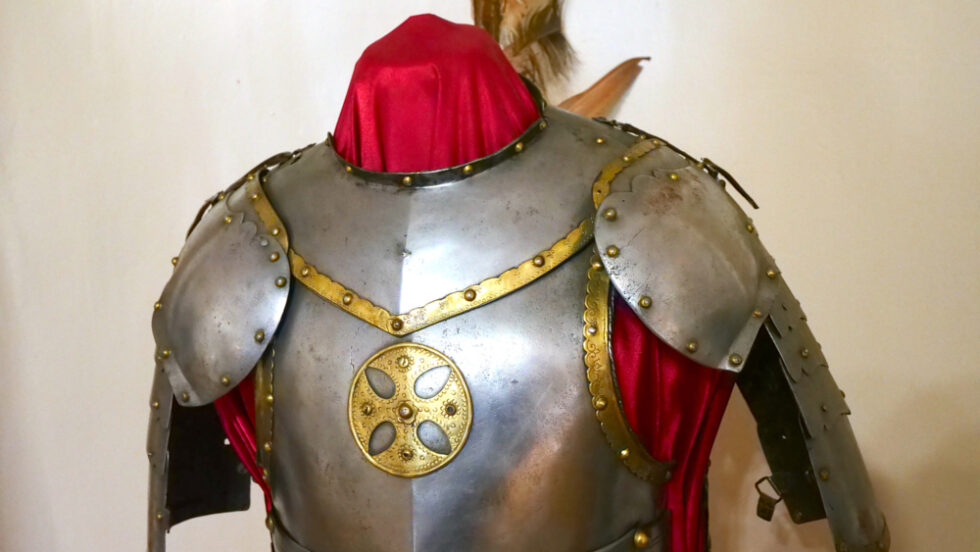 In the next room were icons and offerings from the 17th-19th century. There were lots of books that came from churches and date back to the 1500s and 1600s. There were beautiful, opulent copies of the New Testament!

There’s also a church-like room with brightly-painted walls and ceilings, an altar, a communion cup, the Holy Bible, and more. Then, we saw the Transcarpathian folk musical instruments room, where we saw pipes, drums, trumpets, horns, violins, and 4-meter-long horns! 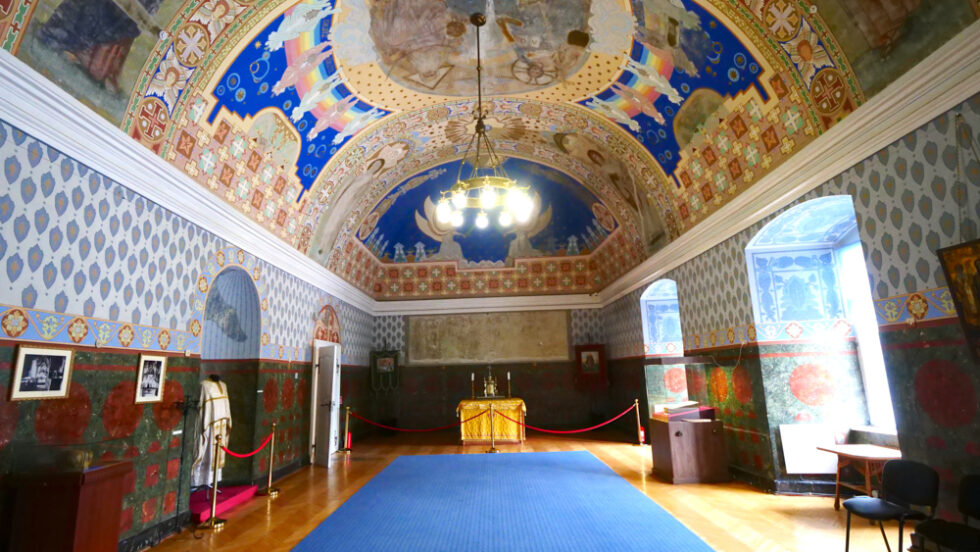 Then, we exited the building and headed through the park and back out into the chilly rain to Villa Alfeld, just a few minutes’ walk from the castle. It’s very discreet and has no sign outside and no Instagram. 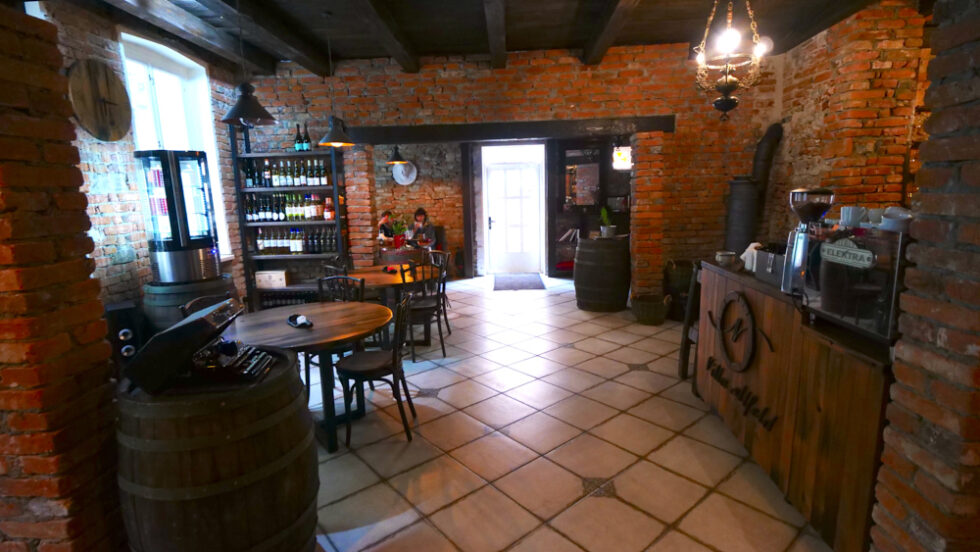 The restaurant is cozy and rustic with exposed brick and wooden furniture. It’s located in a nearly 300-year-old house and there’s a museum upstairs. They also have Hungarian and Ukrainian food since Uzhhorod is so close to the Ukraine and Hungary border. They also offer Hungarian wines. The sommelier there is so funny and friendly—she was amazing! 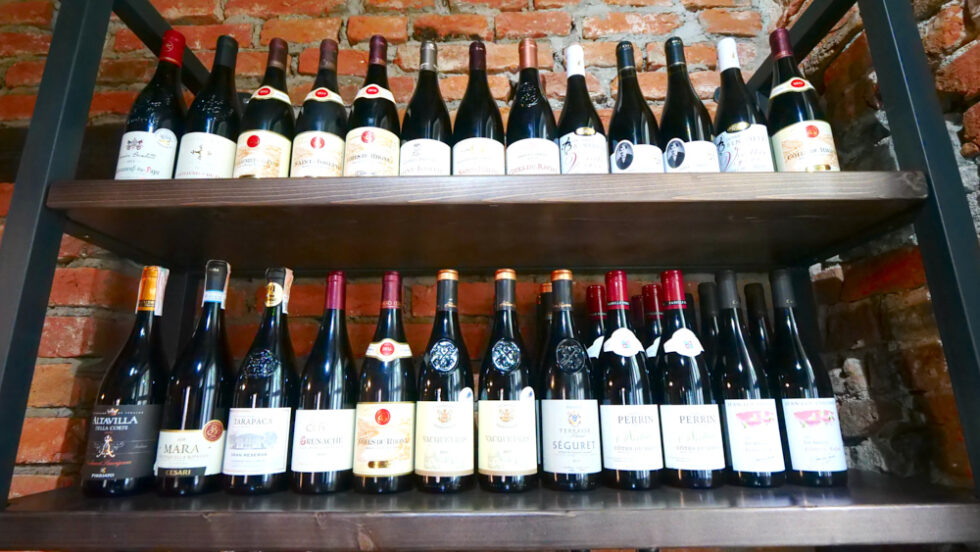 The Hungarian wine was a little bitter, sour, light, and dry. Then, we dug into some goulash, a Hungarian stew made from beef, carrots, beans, and egg balls and comes with rye bread and spicy red pepper paste. 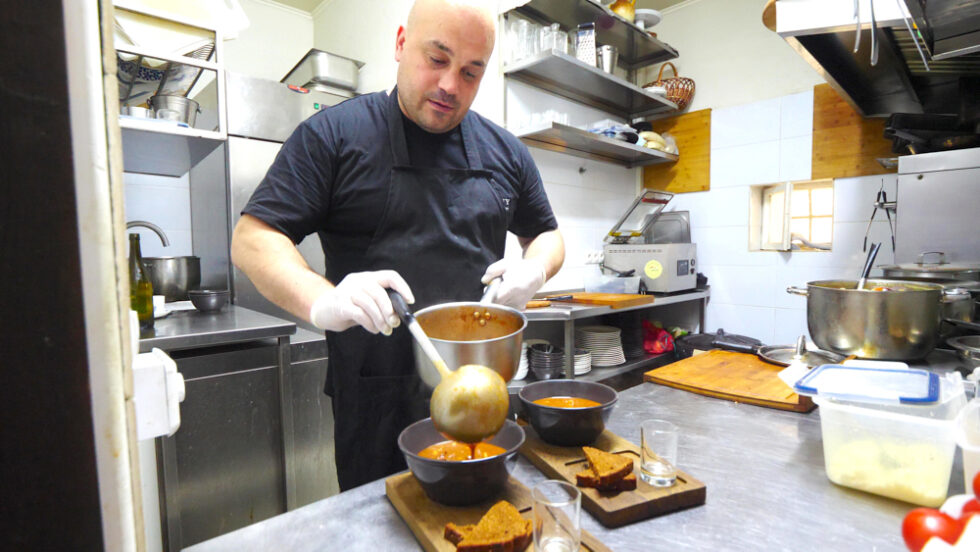 The beans were excellent and had so much flavor. The pepper paste was incredibly spicy! Hungarians love their heat! I added it to the goulash for a kick of heat. I loved the chunky texture of the stew, especially the beans. The rye bread with it was incredible. The goulash reminded me of a good chili!

Next was a Slovakian dish called Segedinski, which contains cabbage, sour cream, and meat on a yeasty bread. The bread was fluffy and the dish was amazing. All of the elements worked so well together. I loved the influences from the neighboring countries. The sweetness of the cream, crunch of the cabbage, and fluffy bread were unreal. 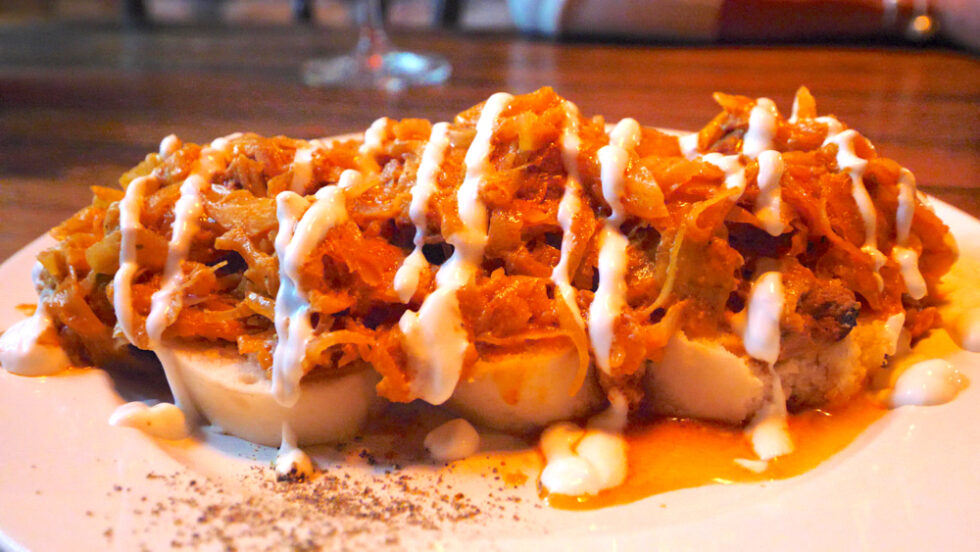 We enjoyed it with some Olaszrizling white wine, which was excellent. Then, I headed into the kitchen to watch the cook Aleksei prepare Mangalica Steak, or the meat from a wild boar that had been crossed with a standard pig. 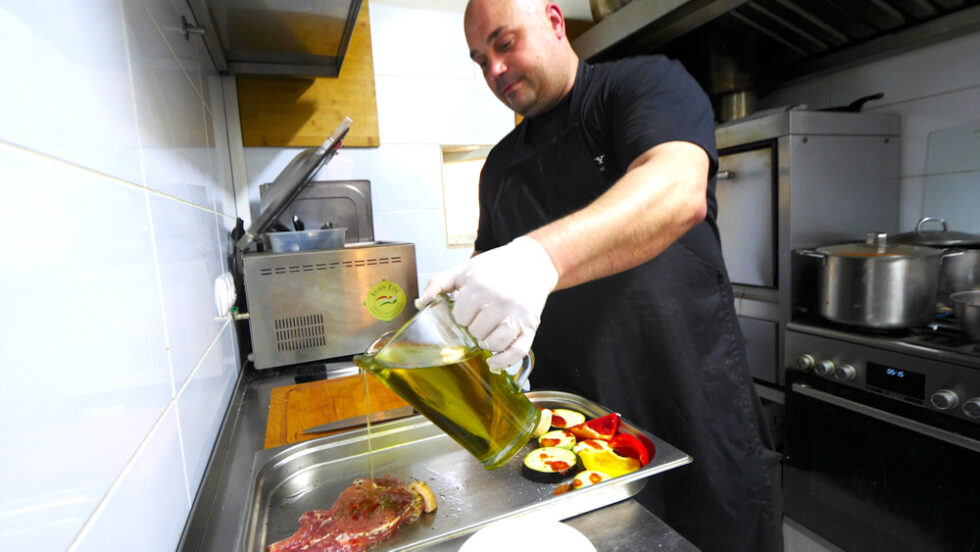 Back at our table was more acidic, earthy red wine from Hungary. Then, we jumped on the Mangalica Steak, which came with peppers and a tomato sauce. The meat was gamy and not too fatty, and the sauce was really unique! Back in the kitchen, I watched them make some banush from cornmeal, cream, milk, and butter. After it simmers, they add honey, walnuts, and cheese. This was going to be a sweeter banush. 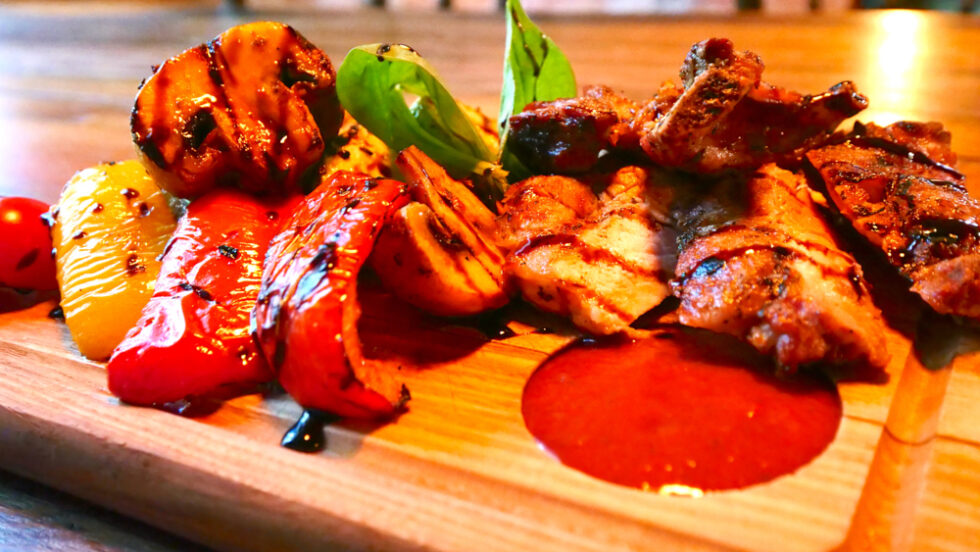 The Sweet Banush had a creamy, fluffy texture and was similar to polenta. I really enjoyed the honey and walnuts. Then we had a local Moscato, which was nice and sweet. Then, I added some cheese to the banush to add some saltiness.

After eating, we headed back out with our friend from Villa Alfeld and saw Uzhhorod Orthodox Cathedral, the main cathedral of the Greek Catholic community. From there, we visited Vulytsya Korzo, the main pedestrian street, which is lined with commercial vendors, pubs, and restaurants. 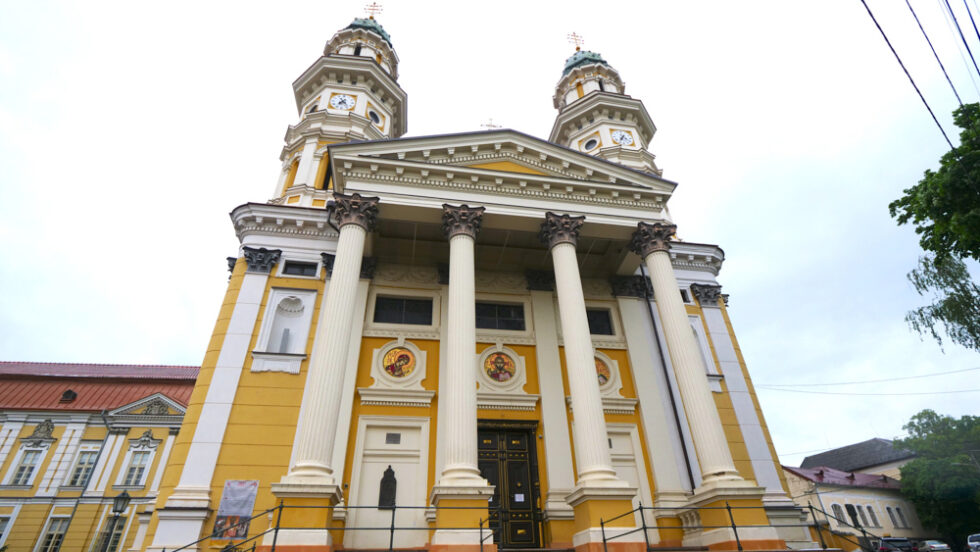 Next, in the Old Town, we saw the Uzh River, which is partly where the city gets its name. “Horod” means “city” in Ukrainian or Russian. Along it is the longest lingen tree alley in Europe at 2.2 kilometers long! Nearby is a statue of an artist named Ignatiy Roshkovych facing the river. The river divides the Old Town in half. Then, we headed to A Priori to have some Ukrainian brandy. The Carpathian brandy was smoky, oaky, and delicious! 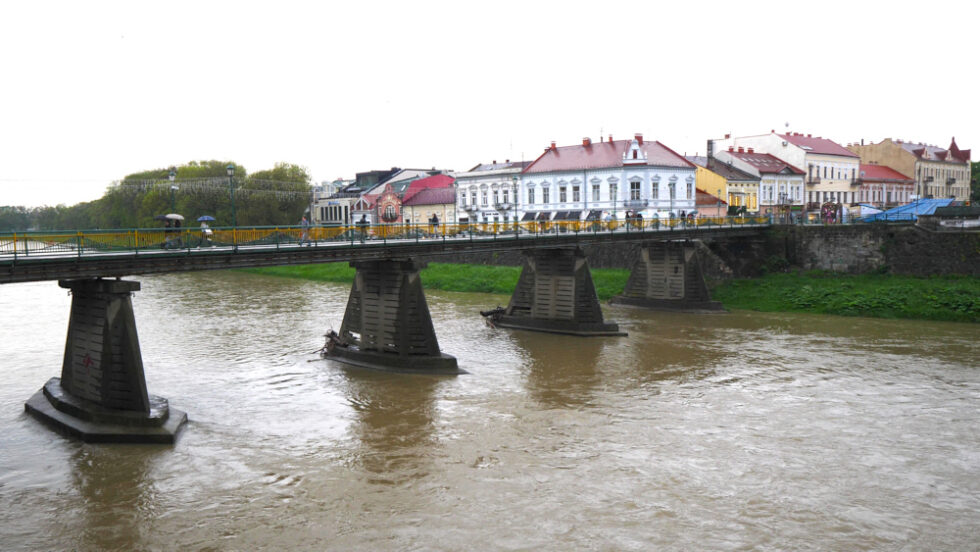 Then, we headed to Riverside coffee shop, followed by a synagogue that now serves as a concert hall. Our final stop was Shtefanyo, where we tried some Uzhhorod Cake, which was a little different from the Kyiv Cake I had earlier in the trip. It contained hazelnut and meringue and was very airy and creamy. They also sell coffee, tea, pastries, and lots of chocolates. What an amazing day in Uzhhorod! 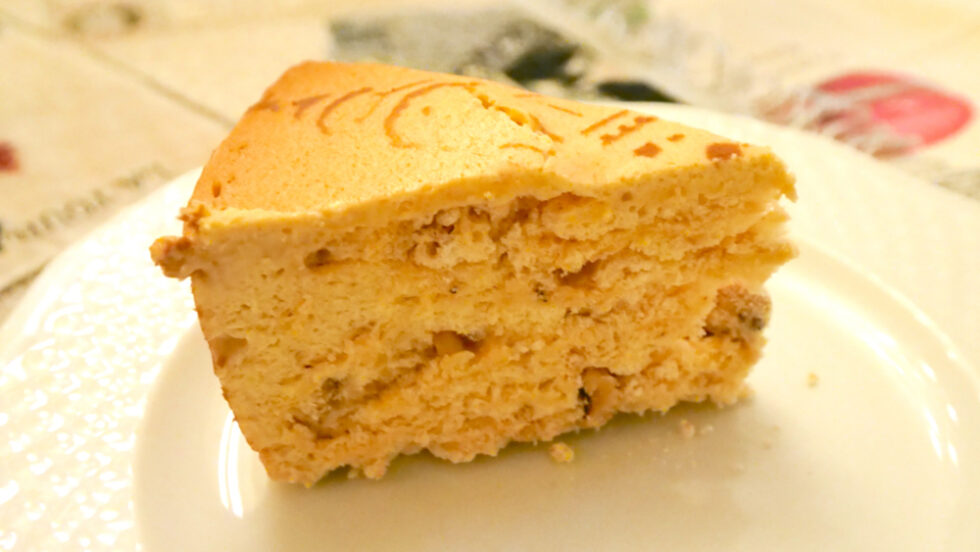 I hope you liked coming with me to have rustic Hungarian and Ukrainian food in Uzhhorod, Ukraine! If you did, please give this video a thumbs up and leave a comment below. Also, please subscribe to my YouTube channel and click the notification bell so you don’t miss any of my travel/food adventures around the world!