With the cities of Kyiv and Lviv, and the Transcarpathian Region in my rearview mirror, I set off to the final city on my epic trip through Ukraine: Odessa. Come with me as I enjoy some delicious Ukrainian seafood on the Black Sea and explore the attractions in Odessa, Ukraine!

Odessa is a beautiful city on Ukraine’s Black Sea Coast. It was founded in ancient times by the Greeks, eventually became an Ottoman city, a Soviet city, and finally, one of the largest cities in Ukraine. I had an action-packed day planned! 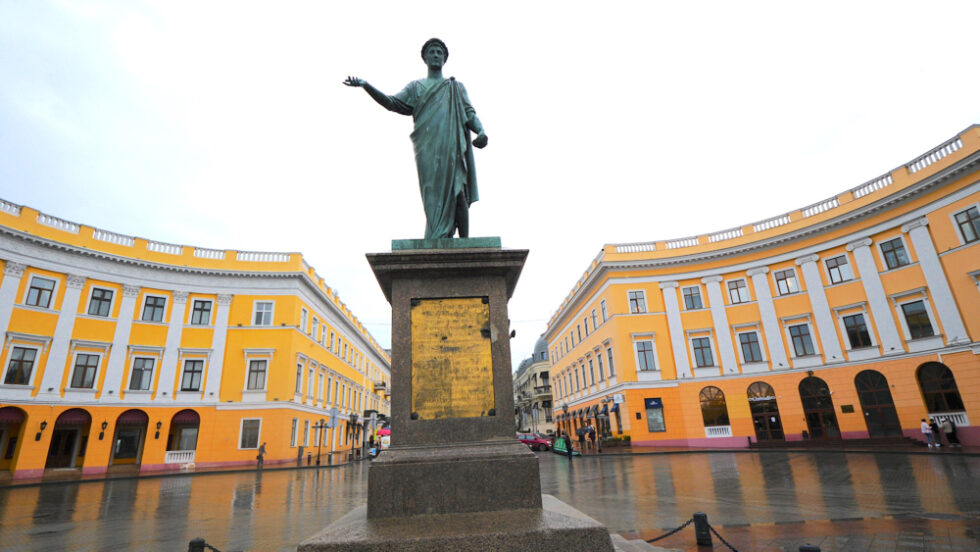 My day in Odessa began with my guide Natasha from Tours by Locals in Square de Richelieu. There are tons of beautiful historical buildings there, as well as the 192 Potomkin Steps. Odessa was built by the people, who dug out the limestone. There are also catacombs underground! The architecture in this Ukrainian city is so beautiful and is evident throughout Odessa and its attractions. 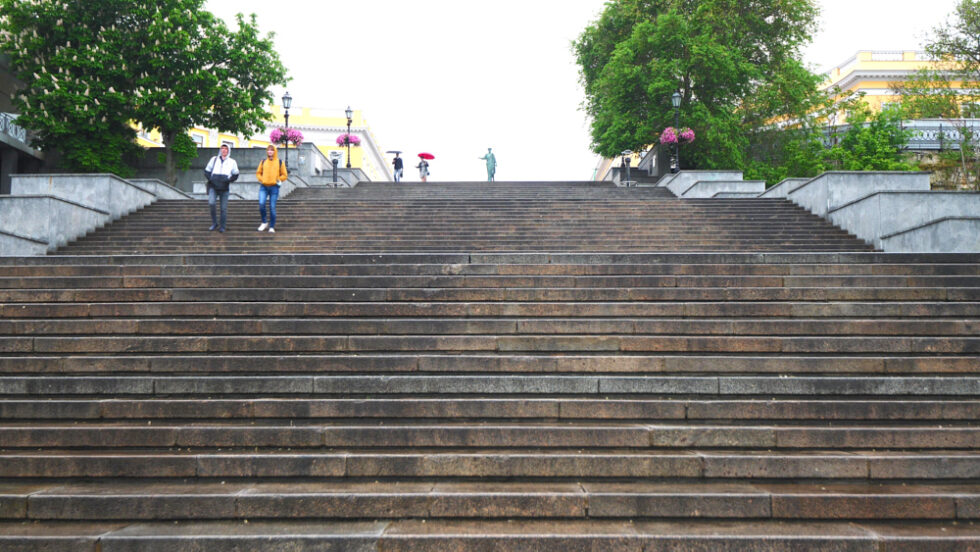 We were making our way toward the Port of Odessa, which connects all of the cities along the Black Sea. It was a rainy day, but we’d still make the best of it. Our next stop was the Shustov Cognac Museum. The museum is owned by Global Spirits, who produces over 500 types of spirits. Inside, they have 23,000 bottles on the ceiling. It’s beautiful and unique! Shustoff is their cognac brand. Included in the entry fee is a cognac tasting. They also have a gift shop!

On your tour, you can learn about the history of Shustoff, from its founding in 1863 to the present day. In 2012, it was awarded the title best cognac produced in Europe. From there, we headed down to the cellar, which was filled with 500 massive oak barrels, each of which contains 10 tons of cognac. There are more barrels on the second level. The smell coming from the barrels was amazing—I felt like I was getting drunk from the aroma! 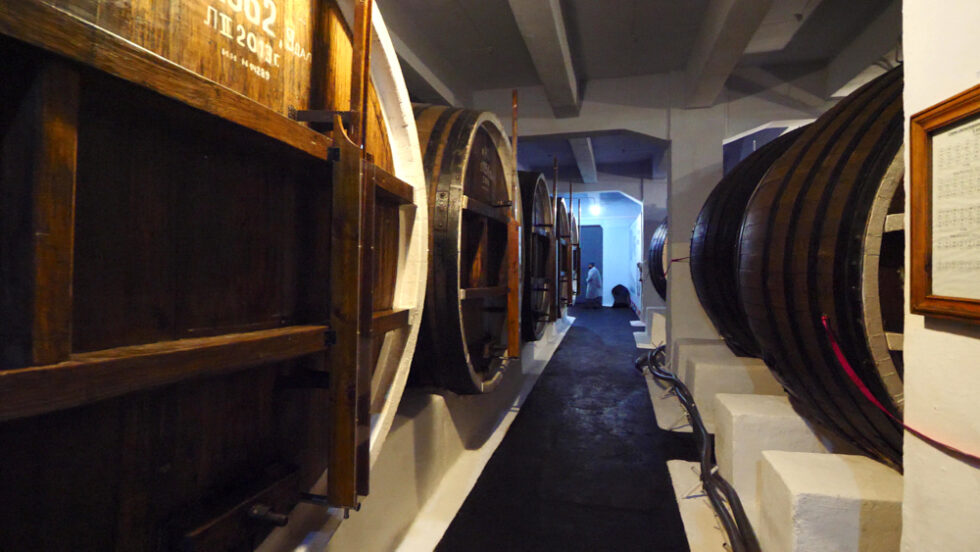 Their oldest barrel in this room dates back to 1949. It’s all being held until it’s 75 years old so they can sell it as a 75-year-old cognac. I climbed up to the top of the room to see their 35,000 barrels from above. The room is kept dark so the cognac ages better. 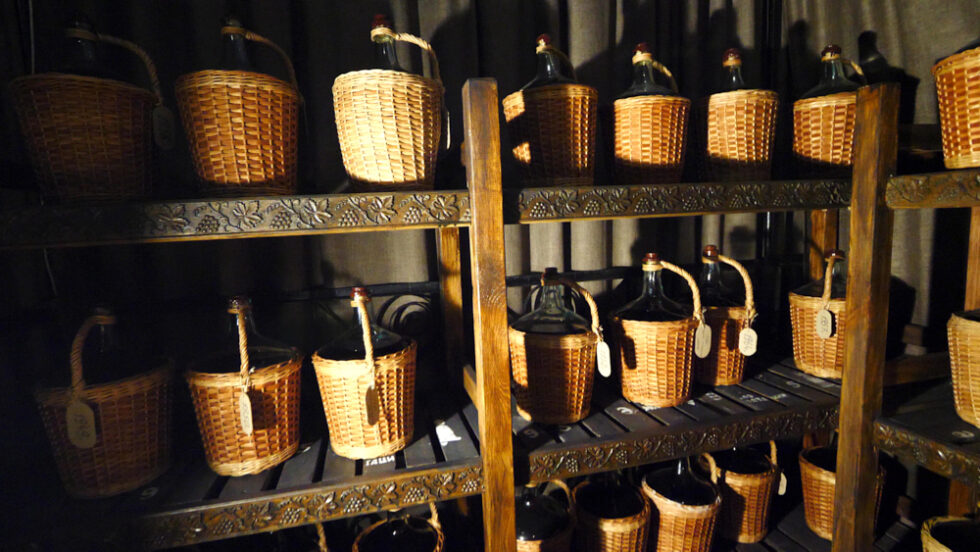 In the Room of Paradise are jugs of cognac. The oldest barrel in eastern Europe is there as well, as well as the biggest. The biggest is over 25 tons, and the oldest dates back to 1893! They have a pipe system that connects the barrels to the bottling system. 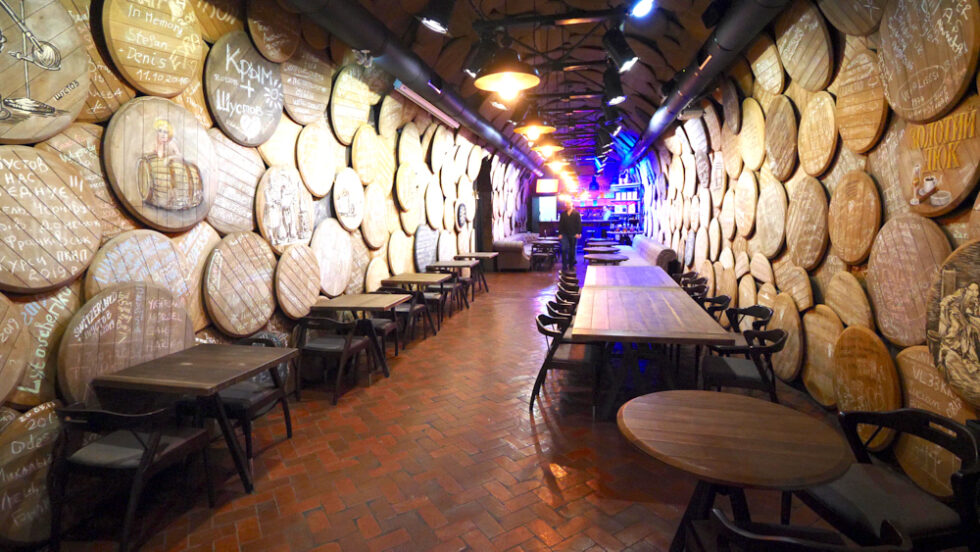 Next, we headed down to the tasting. I rang a wishing bell and then headed down to the catacombs. Our first cognac was their Pirates and their Treasures. This cognac traveled in a barrel around the world on a yacht. It came back and was bottled in only 99 bottles, so it’s limited edition! It’s 35 years old and is very good, unique, and the smell is phenomenal.

Next, I got to see the inside of a barrel and the tools used to make a barrel. Next was the Quintessence, which is 50 years old. It was delicious! After that, we saw an old tram, the evolution of their bottles, and photos of rich 19th-20th century aristocrats who only drank Shustov cognac. They have a bottle from 1898 that costs 100,000 Euros. 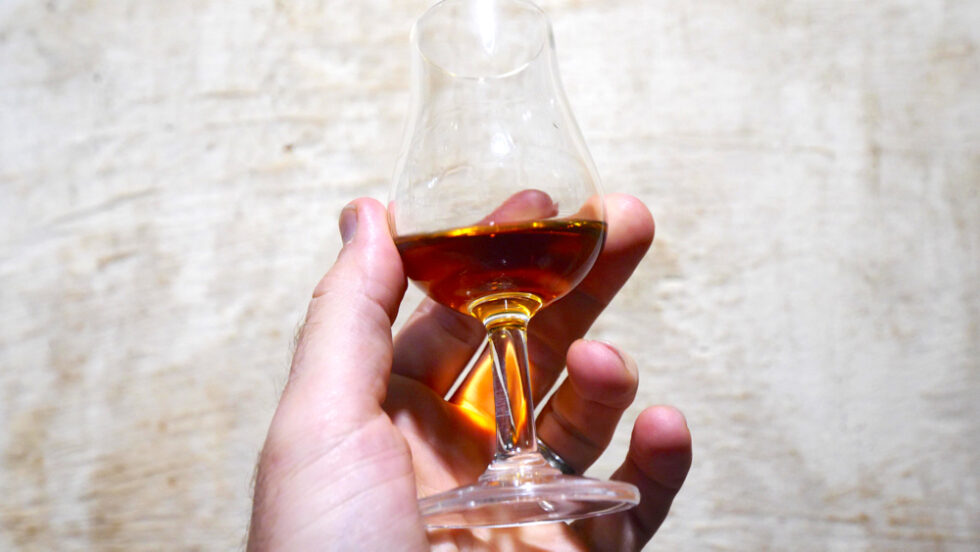 Then, you can watch a 20-minute documentary in their theater. Next was their 70-year-old Exclusive. It’s not part of their tour, so I was one of the few people outside the company who has ever tried it! It was sweet and unique. The people there were treating me like a king! 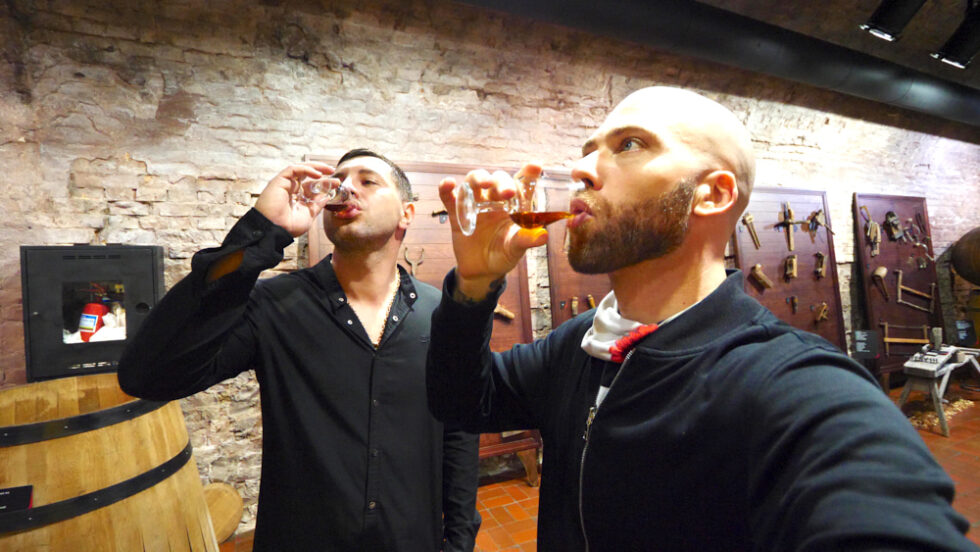 Next was an art gallery featuring Ukrainian artists and photographers. I saw the works of Irina Skripnik, who shot photos of people made up to look like zombies! Then, they took me to a room where you sign your name on the wall. 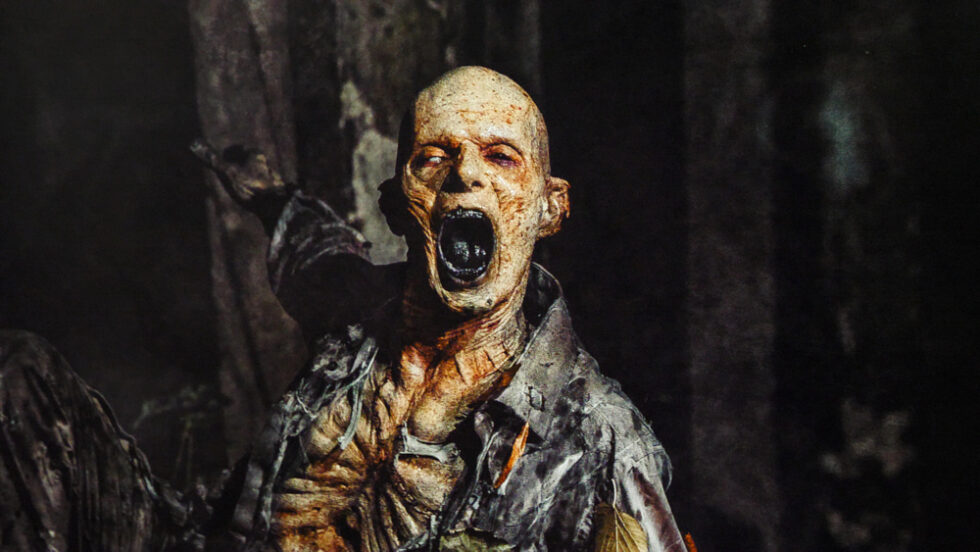 Then, we arrived at Dacha Restaurant, a summer house built in the 1850s. It’s beautiful and expansive. The chef, Sasha, showed me how to make Vorschmack, a dish made with salted raw fish, milk-soaked bread, apples, butter, pepper, and olive oil. They then spread it on rye bread with more raw fish, onion, and parsley.

He also made an appetizer made from local cheese and some giant tomatoes. The Vorschmack was creamy and briny fish salad. I loved it with the pumpernickel rye bread. The onions and creaminess were fantastic. Next were New Potatoes and Sardines. The sardines were salty and went well with the tiny potatoes. I loved that the cuisine in this part of the country was seafood-based. 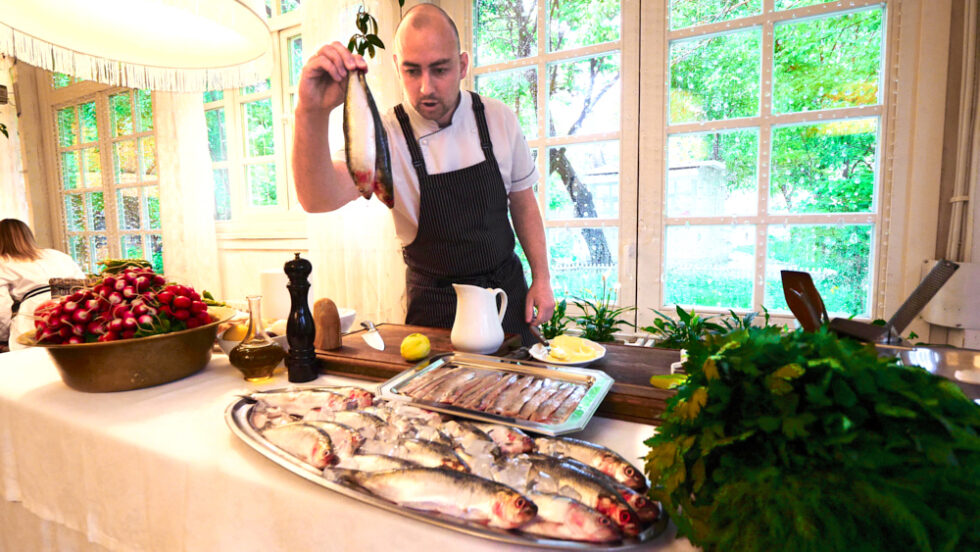 Next was the tomato and mozzarella appetizer with basil. The spongy cheese, juicy orange tomatoes, and herbal basil was outstanding. Then, I tried the Chicken “Neck,” which is basically a stuffed chicken with breading inside. I could taste onions and chicken broth. It was like a delicious stuffed cutlet! 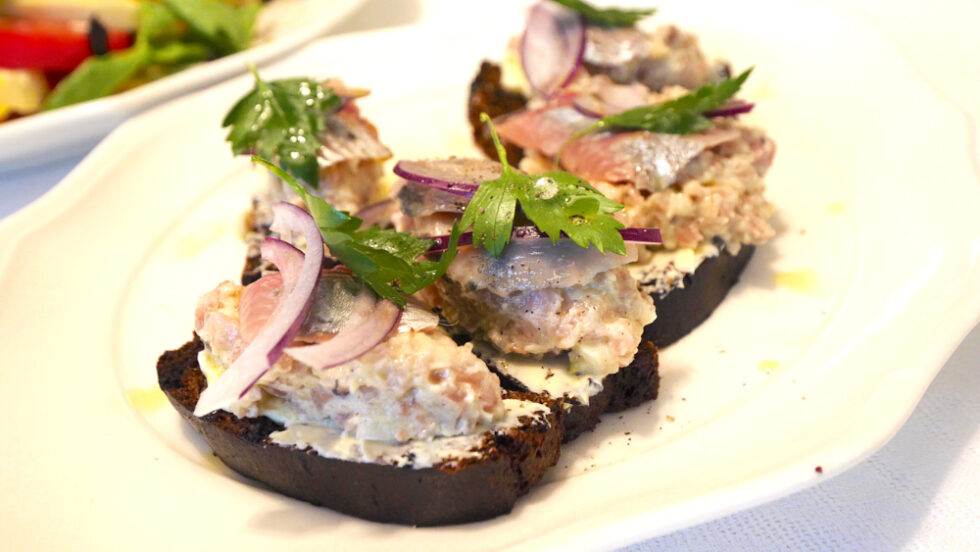 We followed that with Rugelach, or small croissants stuffed with jam. They were sugary and fluffy. But I had to jump back on ]the sardines. I couldn’t get enough of them. I’m a huge seafood lover, so there was no way I was letting them go to waste! 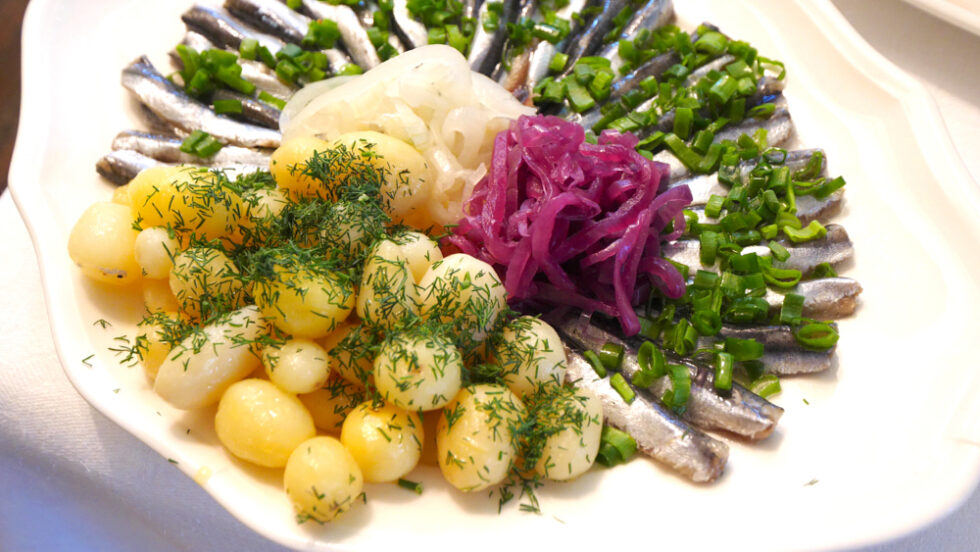 After that, I tried Nalysnyky, which can be either sweet or savory. It’s like a folded crepe stuffed with cottage cream and topped with powdered sugar. It comes with sour cream on the side. I loved how hot and fluffy it was! Then, we headed to a small house on the grounds where they showed us how they make Rugelach as well as tiny vareniki. They make thousands of them per day! 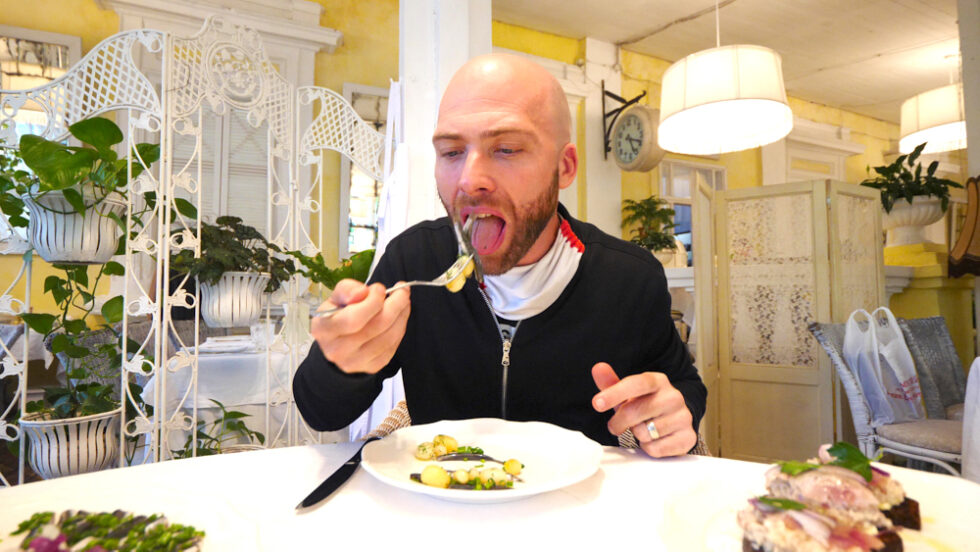 I hope you liked coming with me to have Ukrainian seafood and explore Odessa and its attractions in southwestern Ukraine! If you did, please give this video a thumbs up and leave a comment below. Also, please subscribe to my YouTube channel and click the notification bell so you don’t miss any of my travel/food adventures around the world!