My adventures in the seaside city of Odessa, Ukraine continued with an incredible local food and wine experience. Come along with me as I try traditional Cossack food in a traditional Ukrainian house and go on a private winery tour in Odessa, Ukraine!

My guide Natasha from Tours by Locals and I began our afternoon at Don Alejandro Winery, a boutique winery just outside of Odessa. There, I met the owner, Alejandro, and ran into a guy I met earlier in the day at the Shustov Cognac Museum! The winery is located in Alejandro’s family’s home. It was freezing outside, so Alejandro let me borrow a jacket! 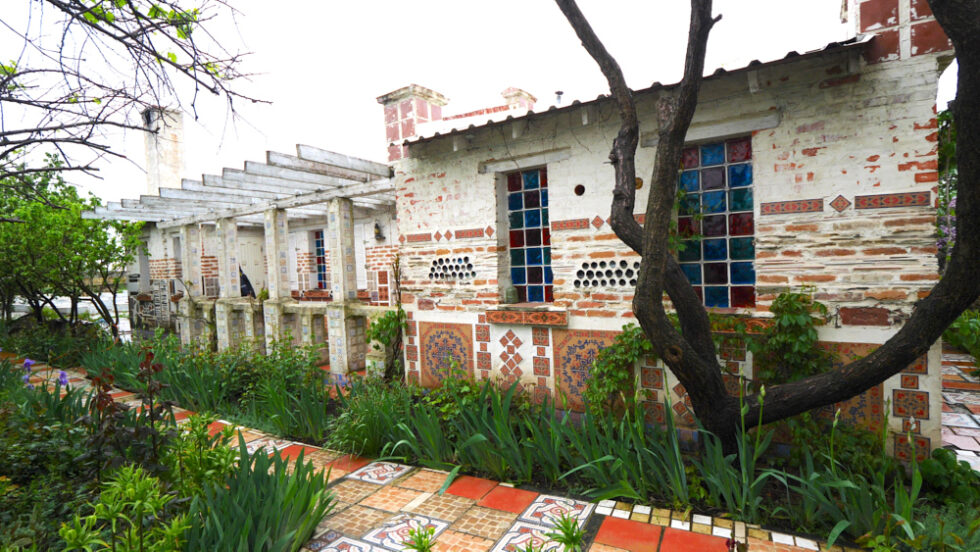 We started in the wine tasting room, where there were shelves full of different wines. The property was beautiful! There were several houses and buildings on the property, which serves as Alejandro’s summer home. The walls were made to look like mosaics. There were even wine bottles set into the tables and concrete walls. There are 600 bottles in the outdoor table and 1400 in the outdoor barbecue! It was so unique and I’d never seen anything like it! 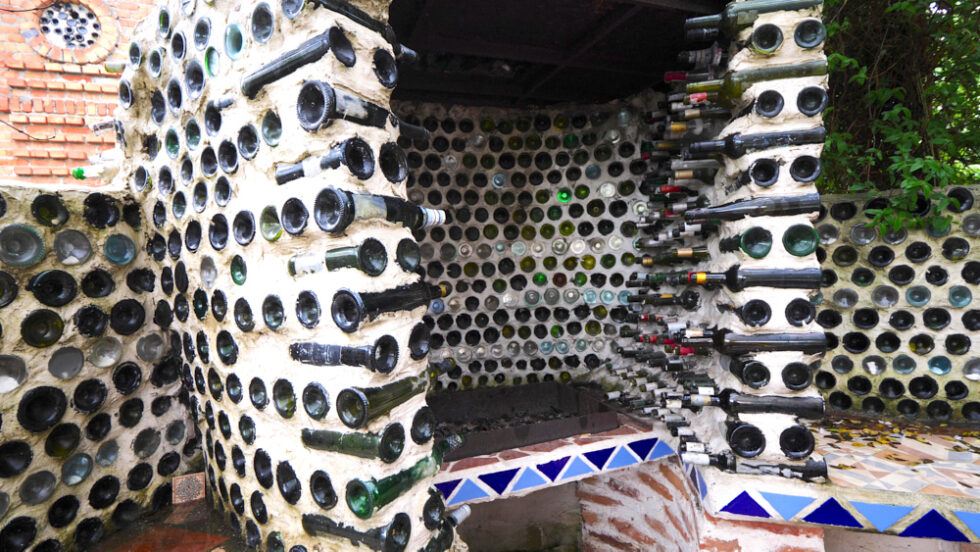 There are also underground cellars that contain 93,000-liter barrels! Then, I saw the original winery, which is now used to store wine. It looked like there were thousands of wines stored there. They also make champagne, which ferments vertically on racks. Each shelf holds 600 bottles. There are also 170,000 bottles in the cellar in the catacombs! Then Alejandro opened a vat filled with fermenting wine and filled up four bottles. He was so nice!

Then, we saw another underground storage area and the bottle labeling room. It’s all done by hand here! From there, we saw a bathroom where they have 1950’s post-war era posters on the walls. Then, it was time to try some of their Young Champagne. Then, Alejandro showed me their liver sausage and let me try some smoked salo. 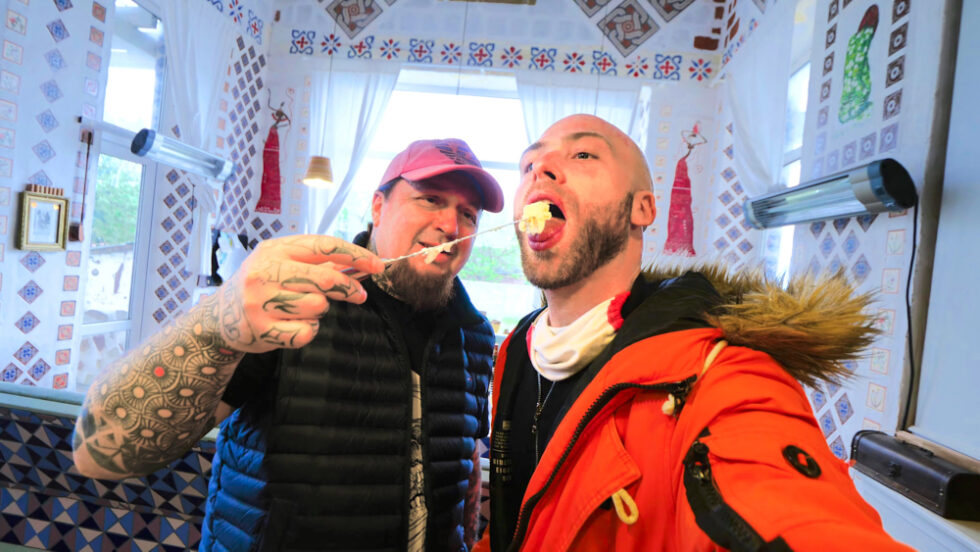 He then fed me some sausage and more salo. It was all so tasty and fresh! I enjoyed the amazing Bryndza cheese, which tasted like feta. 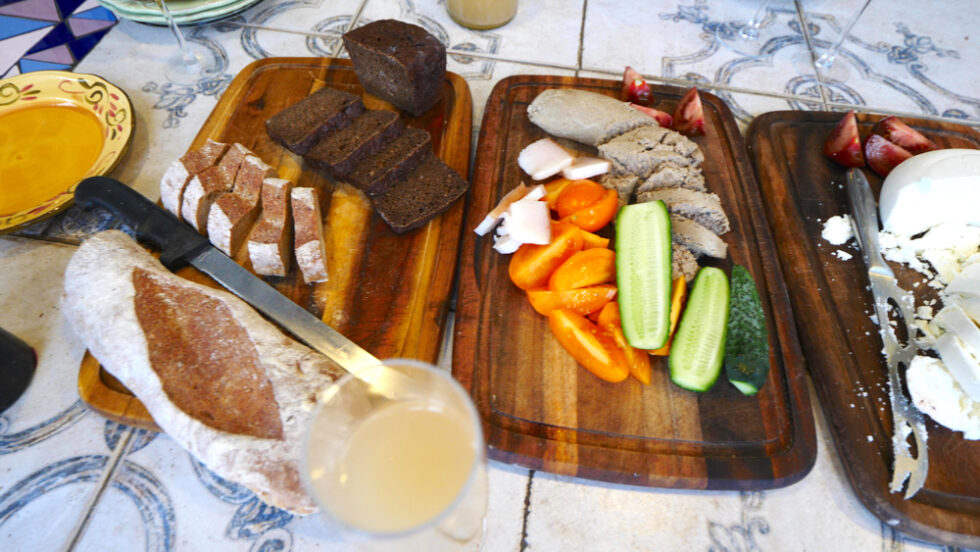 If you’ve followed me for a while, you’ll probably know that I’m a huge fan of blood sausage. His was so good! It was out of this world, but I was already getting full by the time he fed it to me. I would be a blimp if I stayed in this country for too long! 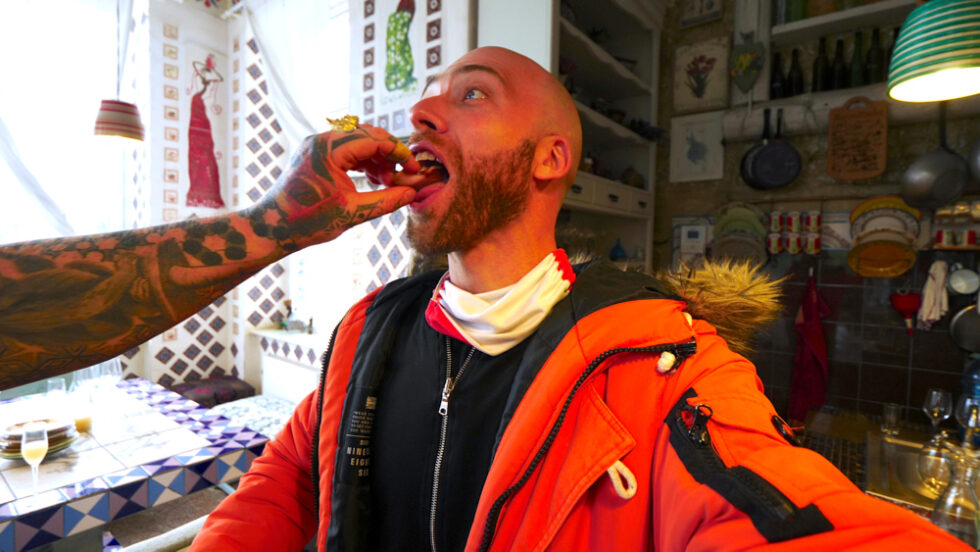 Next up was some Ukrainian Saperavi dry red wine, which they say is similar to Georgian wine. I loved the aroma, and the flavor was excellent. Everything was made locally, including the bread. 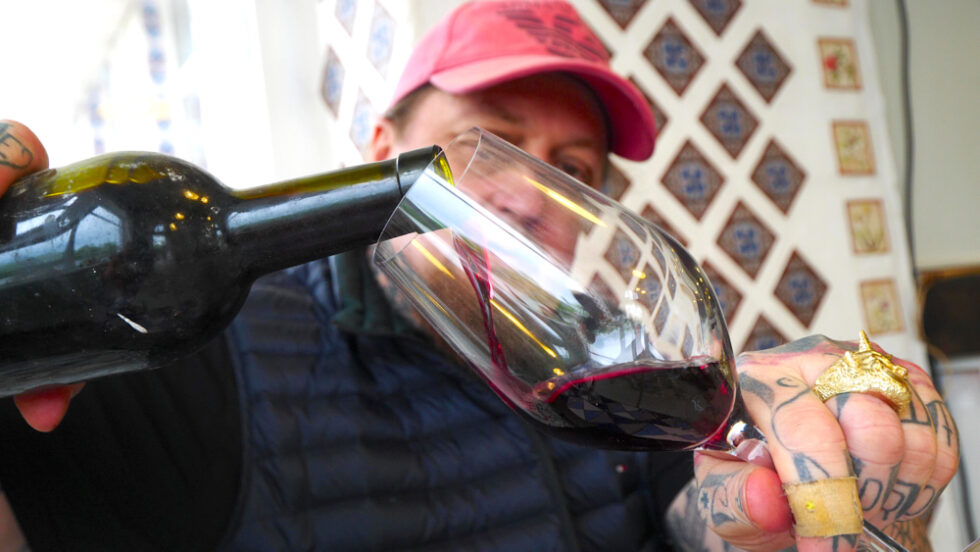 Then, he gave me a bottle of wine as a gift, which I was planning on giving to my dad. Next, we tried their Quintessence Grand Reserve, which had a unique tropical but earthy flavor that I enjoyed. It was perfect for the cold weather and paired nicely with the cheese and blood sausage.

Next was an aged champagne that was like a nice, bubbly farmhouse champagne. Then, Alejandro took me upstairs, past lots of vases from India set into the walls. They were so cool! There some great views of the estuary and the distant vineyards. 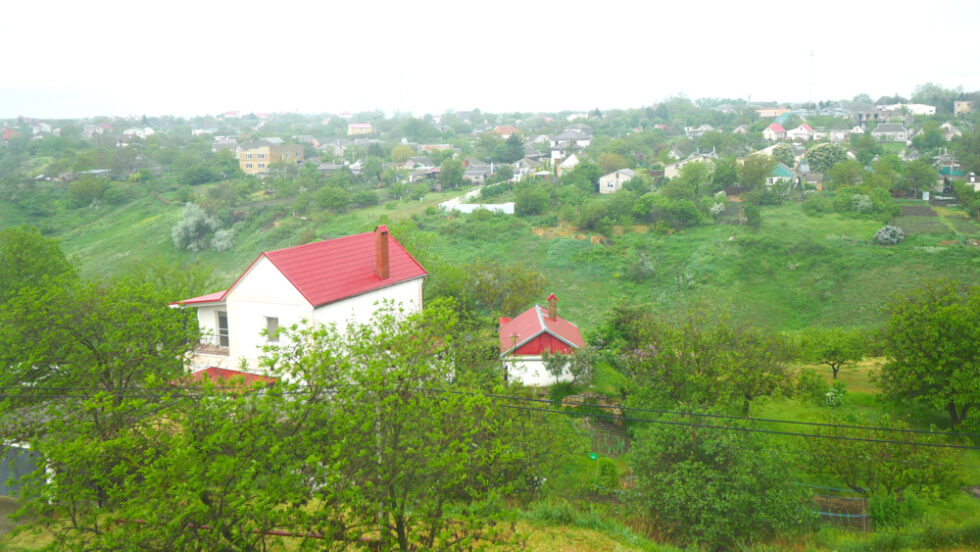 The people here were so kind and friendly! Alejandro really treated me like a king! Then, Natasha and I drove 20 minutes back into the city. I loved the architecture. Odessa is a clean, modern European port city. Our next destination was Kumanets, which was just one block away from my apartment! 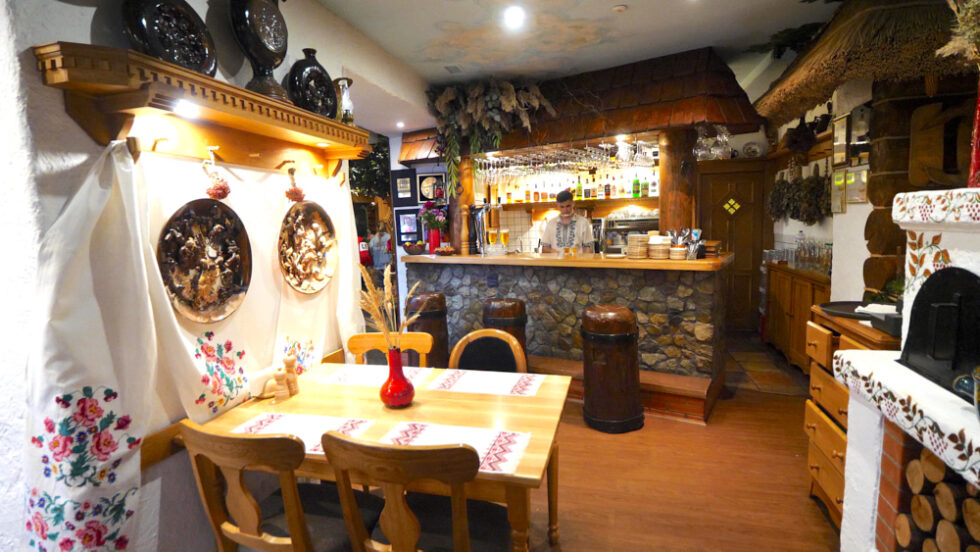 Inside, I tried some horseradish vodka, which was really spicy! I followed that with salo spread on bread. It was addicting! Then, we went for a flight of vodka, starting with honey pepper vodka. Next were cranberry vodka, sea buckthorn vodka, and horseradish vodka. We also had smalets, which is a melted pork lard spread made with salt and garlic. 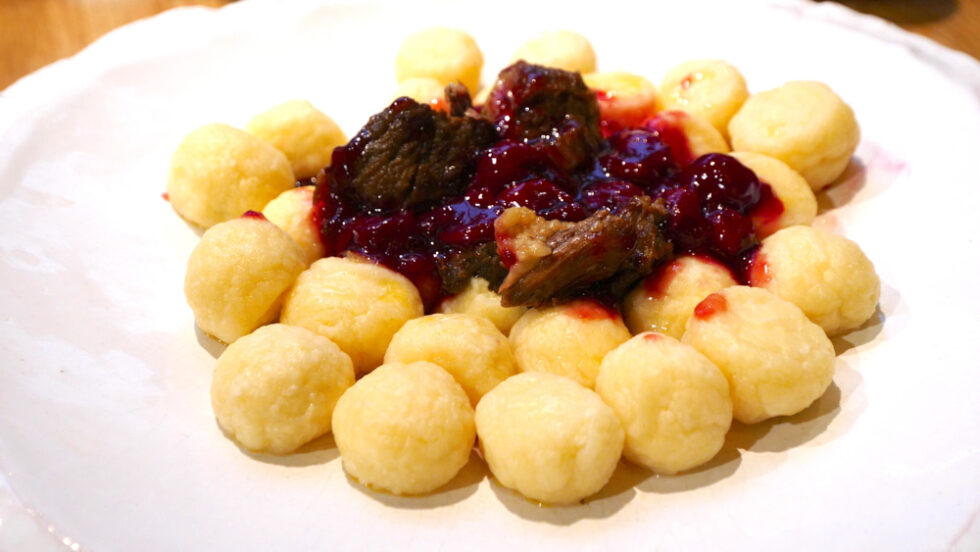 The honey pepper vodka was sweet and spicy, while the cranberry was tasty. The Sea buckthorn was tangy, and the horseradish, as always, was hot! They also brought me some lazy dumplings stuffed with cottage cheese as I tried the smalets on rye, which was so tasty and unique! It’s so creamy!

The “lazy” dumplings aren’t made with the same effort as the traditional vareniki. They came with veal and cranberry sauce. I loved them! The cranberry gave it a nice sweetness that paired nicely with the savory, slow-cooked veal. Next was stuffed cabbage, which contained rice and pork. They also brought me Goby fish. The stuffed cabbage were right up my alley and unreal! 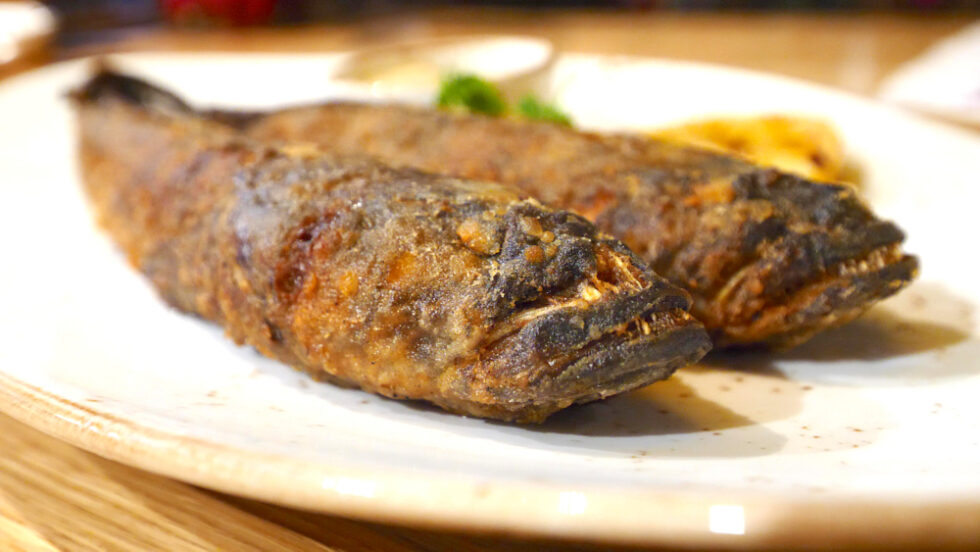 Then, I picked out the spine and bones in the goby fish. It was an amazing Black Sea fish with a spicy horseradish mustard sauce. It was so flaky and tasty, I had to go in with my hands! The cheeks were excellent, but the spicy sauce was fiery! 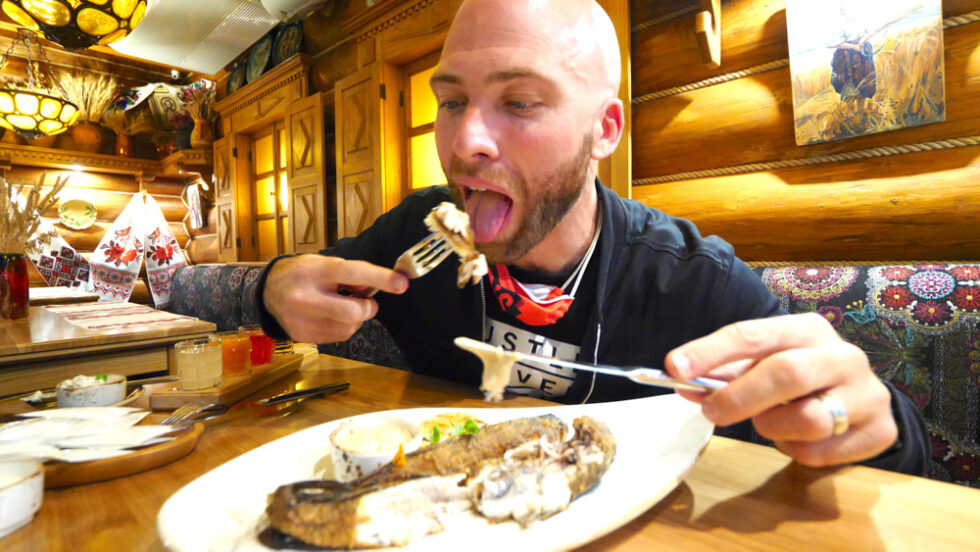 I hope you liked coming with me to have Cossack food in Odessa, Ukraine! If you did, please give this video a thumbs up and leave a comment below. Also, please subscribe to my YouTube channel and click the notification bell so you don’t miss any of my travel/food adventures around the world!