The country of Ukraine is such a hidden gem in Eastern Europe, from its mountains to its cities to its southern coastline. Join me along the Black Sea coast as I enjoy Ukrainian seafood and attend a goat therapy session on the Black Sea in Mykolaivka, Ukraine!

My guide Natasha and driver James from Tours by Locals and I started our adventure in Mykolaivka, a small farming village roughly two hours south of Odessa. It’s located on the Black Sea coast, but I was there to visit Kozy Ta Matrosy, an incredible local dairy farm and restaurant! 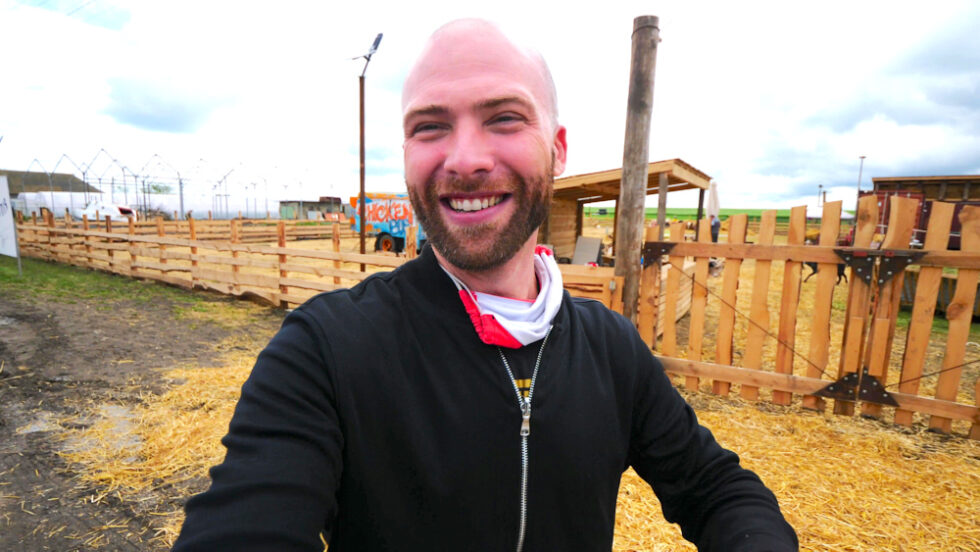 Wandering around the farm are lots of goats and chickens. There are also boats, old trucks, bicycles, and even a piano outside on the grounds. The goats were so cute! You can eat and you can also feed the goats! They quickly surrounded me and were ravenous!

Then, we headed inside the stable for the goats, which has troughs full of grass. They also have areas where they milk the goats in the mornings before they go outside. Outside, there were lavender fields. They also grow tomatoes and carrots. Everything is organic! They have plans to build guesthouses next to the lavender fields! The place already looked incredible. 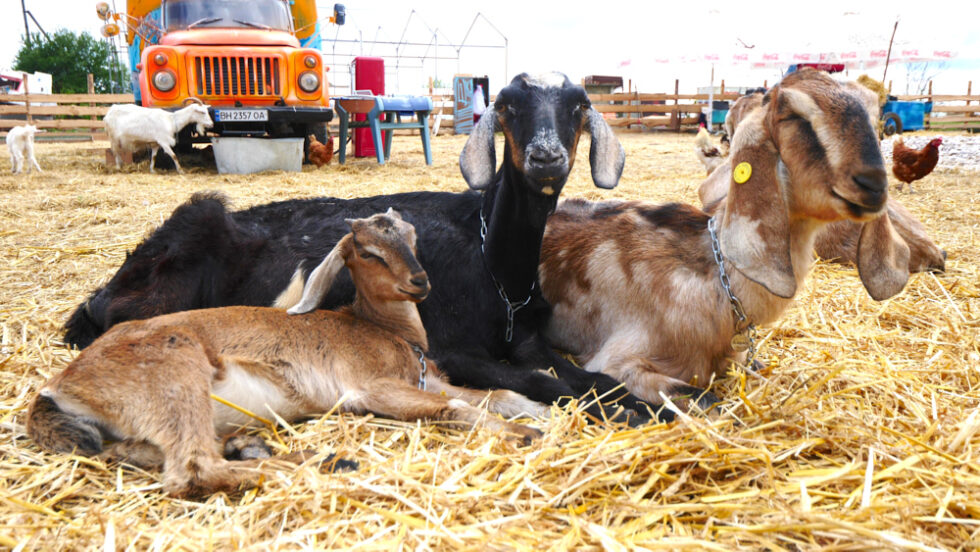 Then, I visited a greenhouse where they were growing tomatoes and other vegetables. There are several greenhouses, where they also have cabbage, basil, cucumbers, horseradish, and bell peppers. There’s also a vineyard next door, but it belongs to their neighbors. I tried some delicious fresh basil in one of the greenhouses. Outside was a construction site where they were building their restaurant, set to open June 9, 2021.Then, we saw some Turkish coffee, which is heated in containers in sand. 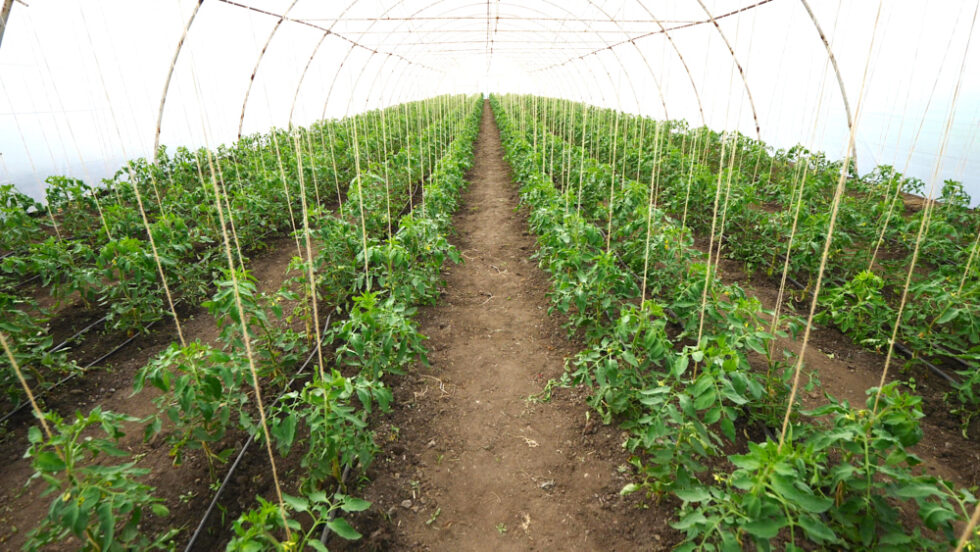 First, I tried some fresh, creamy goat milk and some mozzarella-like goat cheese with a dense texture. They also had a young feta-like cheese. Then, I tried some panna cotta topped with condensed milk, which was extremely sweet and pretty dense. 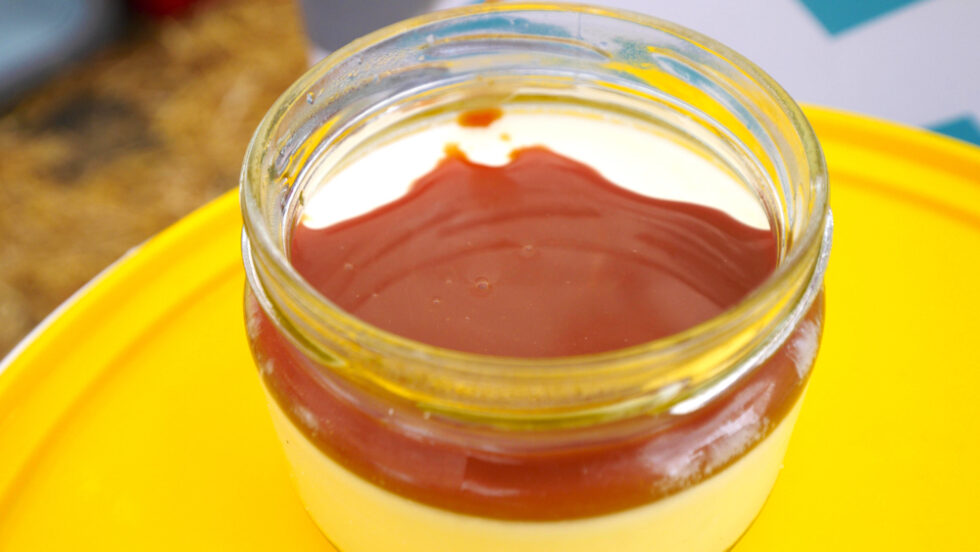 It reminded me of crema catalana or crème brulee. Next was a frothy goatmilk milkshake! The frothiness reminded me of Indian chai. I followed that with some strong Turkish coffee, which gave me some energy!

Next, I headed over to a bus on the site, which is called the Chicken Bus! Every day, the chickens inside lay eggs! Then, Julia gave me some panna cotta and cheese to take with me. Then, we’d get to take a master class to see where they harvest oysters! They also have a seafood restaurant called Chenomorka right on the Black Sea, which I hadn’t visited since my time in Bulgaria in 2013. 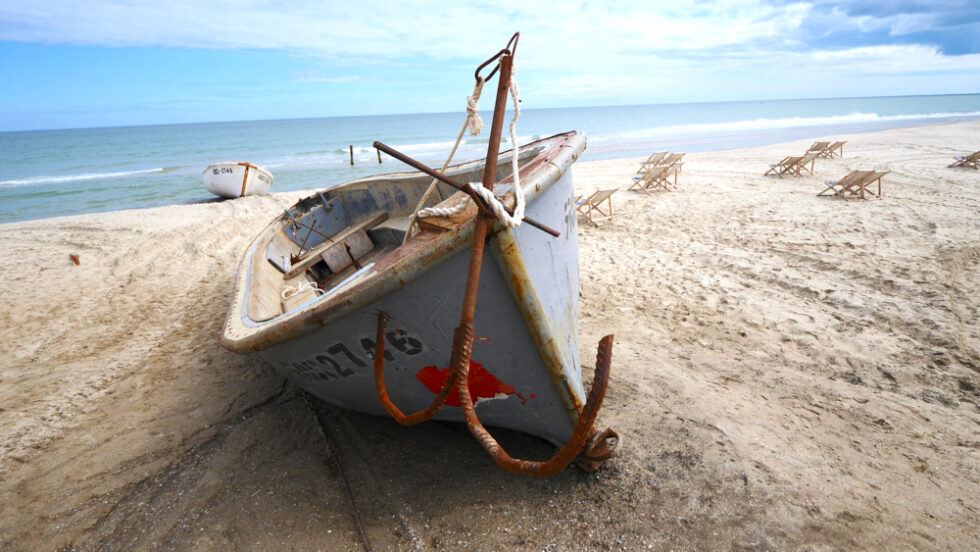 At Chenomorka, I ordered some fresh oysters from Ireland and France and gook a seat with a view of the beach. The oysters were so briny and fresh! The horseradish sauce made them super spicy! 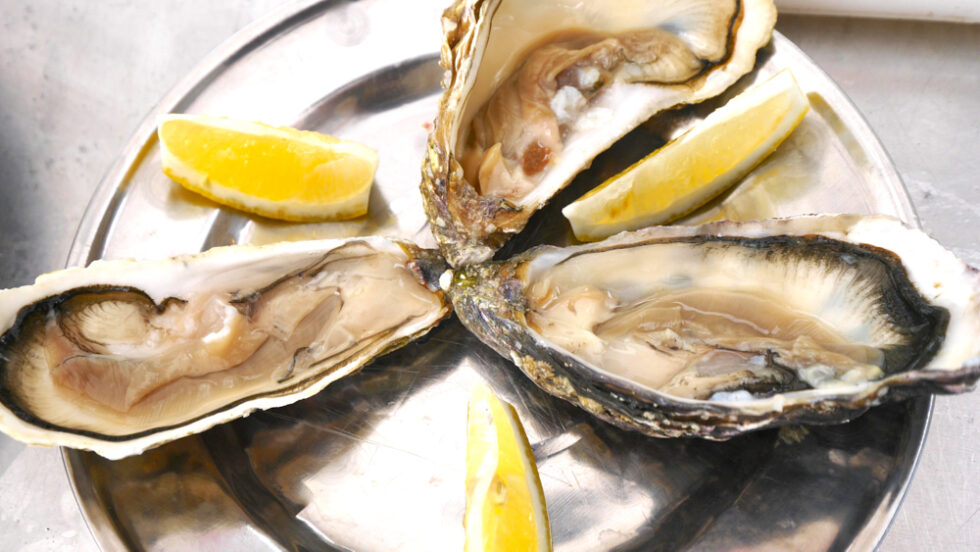 The restaurant’s white tables and fisherman’s village aesthetic was extremely calming and peaceful. It almost made me feel like I was on an island in Greece! 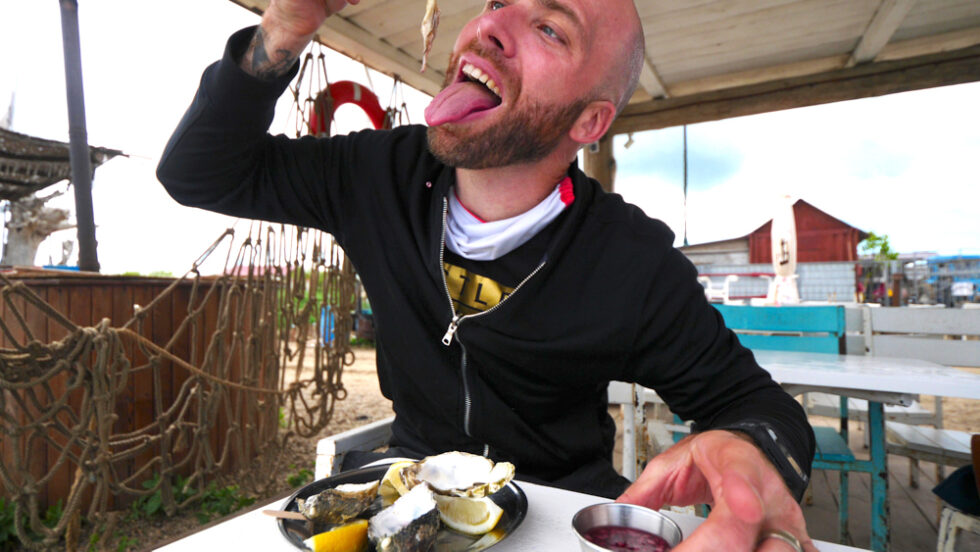 Next, I got a large bowl of Black Sea mussels, which had been drizzled with oil and seasoned with parsley, onions, cream, and dill in an incredible, tasty sauce. I couldn’t get enough of them. There were at least fifty mussels in the bowl! They were addicting! 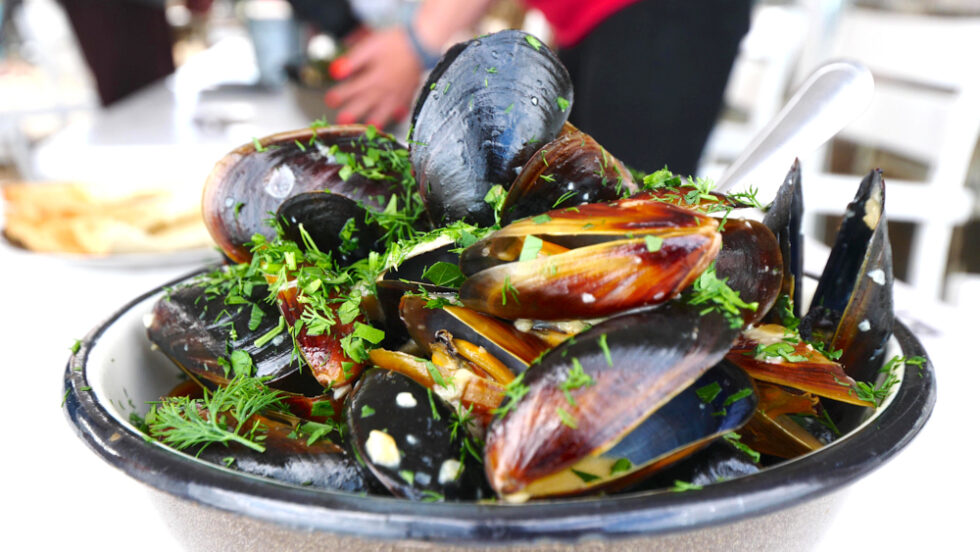 The restaurant has an extensive seafood menu and it all comes right from the Black Sea south of Ukraine. At one point, a cat came up to me and wanted some of my mussels! Next, I got a platter of five different types of thin fried fish, including sargan (garfish), khamsa (anchovies), lufar (bluefish), stavrida (horse mackerel), and barbulia (goatfish). They were lightly battered and crispy, and you remove the heads of them before you eat them.

They were crispy and really tasty. The cat really liked them, too! It reminded me of the fried fish dishes I’ve eaten on the Adriatic Sea in Italy. Some of the fish had spines, but they were easy enough to get rid of. The lufar is the most expensive fish in the Black Sea. It contained lots of bones, while the stavrida were easy enough to bite through whole. Each fish had a completely different flavor! 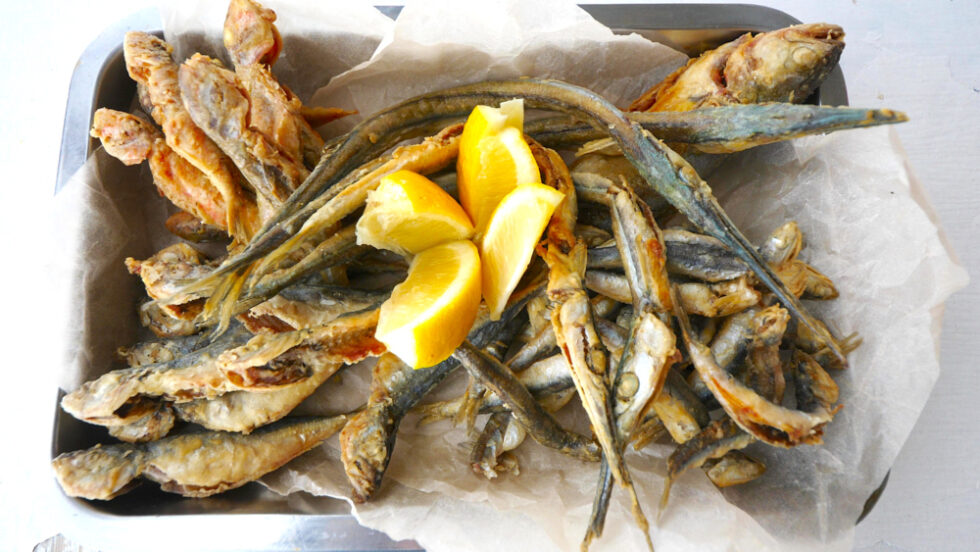 This seafood feast was one of my favorite food experiences in Ukraine. The fresh seafood aspect is so different from the heartier, richer, and meatier cuisine I experienced in Lviv and Kyiv. If you love fresh seafood, you have to come to Mykolaivka! 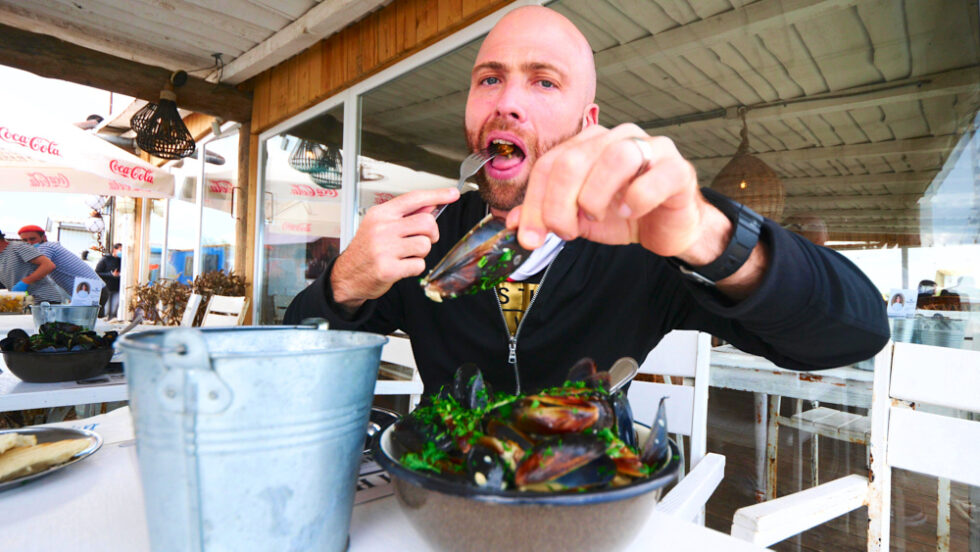 I hope you liked coming with me on my Ukrainian seafood experience on the Black Sea in southern Ukraine! If you did, please give this video a thumbs up and leave a comment below. Also, please subscribe to my YouTube channel and click the notification bell so you don’t miss any of my travel/food adventures around the world!