Jodhpur is the blue city in Rajasthan. It was established by Rao Jodha, a Rathore clan member, in 1459. The city’s name is preserved in his honour. Jodhpur, formerly known as Marwar, was once the capital of Marwar. Rao Jodha was the first ruler of the city. Maharaja Gaj Singh II was the last ruler of Jodhpur. After this, Jodhpur became a princely state under British control from 1818 to 1947. Jodhpur is known as the Sun City due to the hot weather and lots of sunshine. 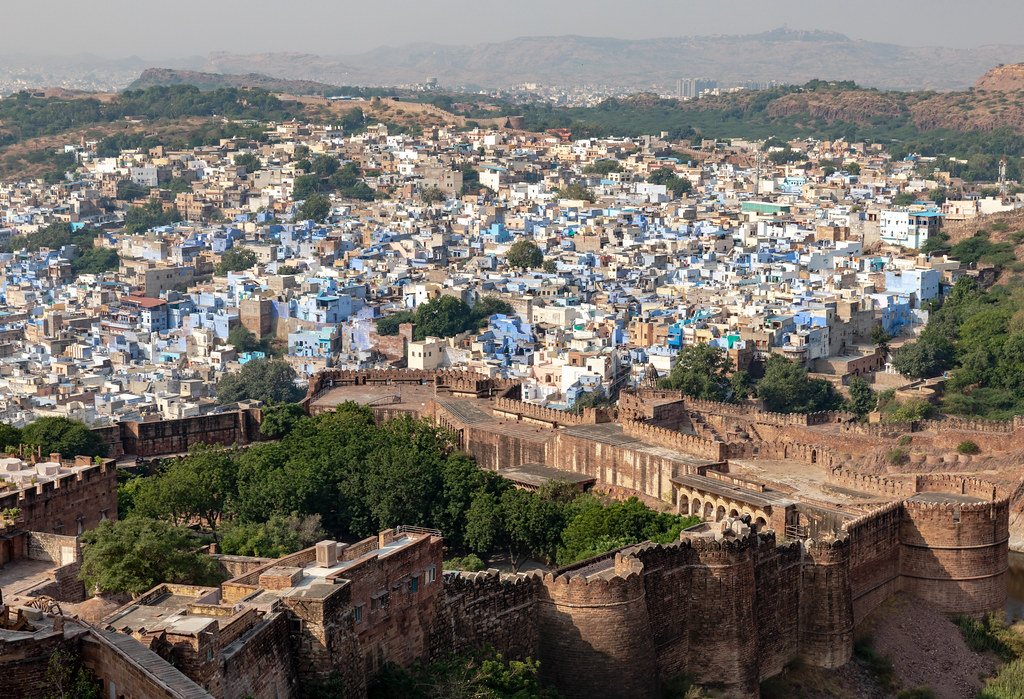 Jodhpur is also known as the blue city because many of its buildings are blue. Jodhpur residents painted their homes blue to repel termites, which can cause damage to buildings. According to another story, the buildings were painted blue to protect them from the heat.

Rao Jodha, who founded Jodhpur, is the most significant legend in Jodhpur’s history. Mandore was their capital until 1459, but they realized they needed safer money to build their kingdom. Rao Jodha was the one who created Jodhpur. The last king of the city was Maharaja Gaj Singh II. The legends of the city included Maharaja Si Sardar Singh II, Maharaja Simair Singh, Maharaja Maharaja Umaid Singh and Maharaja Silhant Singh.

Jodhpur is an idyllic place. Jodhpur is a city rich in historical monuments, cultural heritage and a rich lineage of handicrafts. It also boasts bustling markets, delicious cuisines, and fascinating history. Tourists from all over the world flock to the city’s vintage charm. It is a top place to visit because of its beautiful architecture, old streets, blue houses, beautiful greenery and all that Jodhpur trip offers.

There are many places to explore in this beautiful city. These are the top places to visit in the city. The Winter season is the best time to visit Jodhpur (October to March). Jodhpur has an airport, railway junction, and national & state roads. Jodhpur is easily accessible by train, flight and road.

Mehrangarh Fort is the most popular tourist spot in Jodhpur. It is also one of the most visited places in Rajasthan. It is now a museum that displays Jodhpur’s culture and heritage. It was once the home of the royals, and its aura persists today.

Bishnoi Village is a beautiful village just a few kilometres from Jodhpur. This village is known for its many cultural activities, including desert excursion, cane spotting and village walk. It’s a great idea to always go to this village as per reviews and travelers experiences.

Umaid Bhavan Palace is – one of the most picturesque places in Jodhpur. This palace is the most recently constructed in the country. The palace’s striking feature is its architecture. The castle has three parts. One of them is still in the ownership of the royal family, and they live there.

Jaswant Thada: The building’s architecture is promising. This is why so many people love it. It has white marbles as its decoration and was built in memory of Maharaja Jaswant S. It is just a few steps away from Mehrangarh Fort.

Balsamand lake: Jodhpur has many lakes. Balsamand Lake is one of them. This artificial lake was initially used to provide water for Mandore villagers. This was built by Balak Rao Parihar and is a tourist attraction in the city.

Famous Fairs – Festivals – Events – The people of Jodhpur celebrate many festivals and actively participate in fairs, just like the rest of India. Jodhpur also hosts many local festivals and fairs.

Nagaur Festival: This is India’s second-largest fair. It speaks volumes about the beauty and wonder of this fair. It’s an 8-day festival that takes place every year in January and February. It is also known as the Cattle Fair of Nagaur. It is fair that it deals in animals, including bullocks, camels, and horses. Other attractions include wooden items, red chillies and camel leather accessories.

Marwar Festival: It is Marwar Festival, a famous Jodhpur festival. Folk dancers perform a variety of shows that showcase the city’s culture. Jodhpur is the capital of the Marwar region at that time, which is why the festival is celebrated here.

Jodhpur International Desert Kite Festival is a festival that was started in India in recent years. It has gained enough popularity in a short time. This festival attracts the best kite-flyers from across the city. It takes place on the 14th of January, during the Makar Sankranti festival or the Uttarayan festival.

Tourism is essential – Jodhpur used to be the capital of Marwar. This is why the city has seen prosperity throughout its history, and it continues to be so today. Tourists from all around the globe visit the city to experience its royalty. Its royal palaces, buildings and forts are still charming. In the past few years, the city has seen an increase in tourist arrivals. Jodhpur is now a major tourist destination and plays a significant role in Rajasthan tourism.