My adventures in Georgia continued in the beautiful capital city, Tbilisi, on a scorching hot summer day in July of 2021. Join me as I enjoy some incredible Georgian food and wine in Tbilisi, Georgia!

My afternoon began at the Chronicles of Georgia, a monument about 30 minutes outside the capital. A famous Georgian sculptor built it in 1985. It’s made up of a number of massive pillars carved with the likenesses of Georgian kings, queens, and famous national heroes. Carvings depicting the life of Jesus Christ also adorn the pillars. 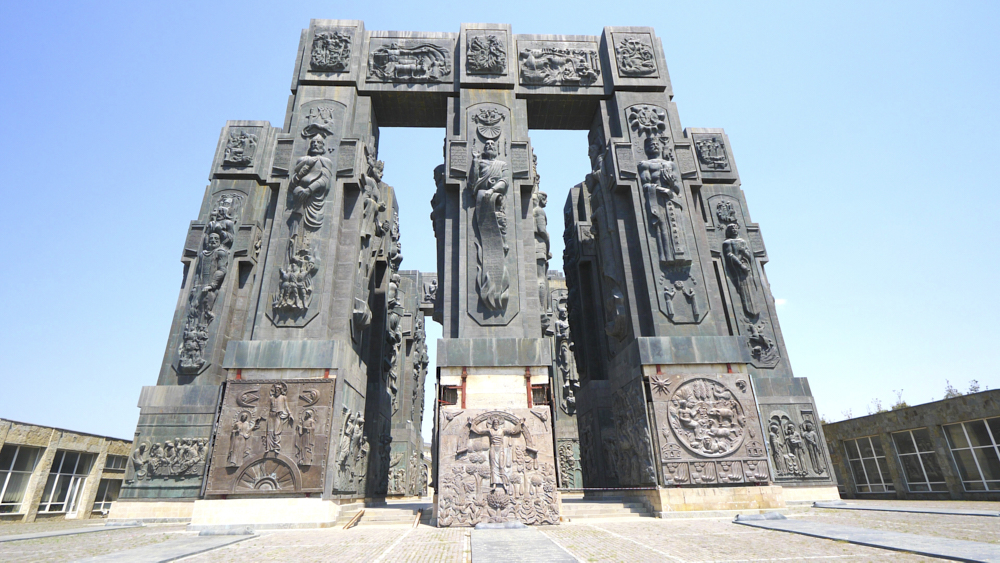 My guide Sophie from Travel Tbilisi told me that the monument actually isn’t complete and is still under construction. It’s beautiful and massive, and it actually looks ancient even though it’s only 36 years old. 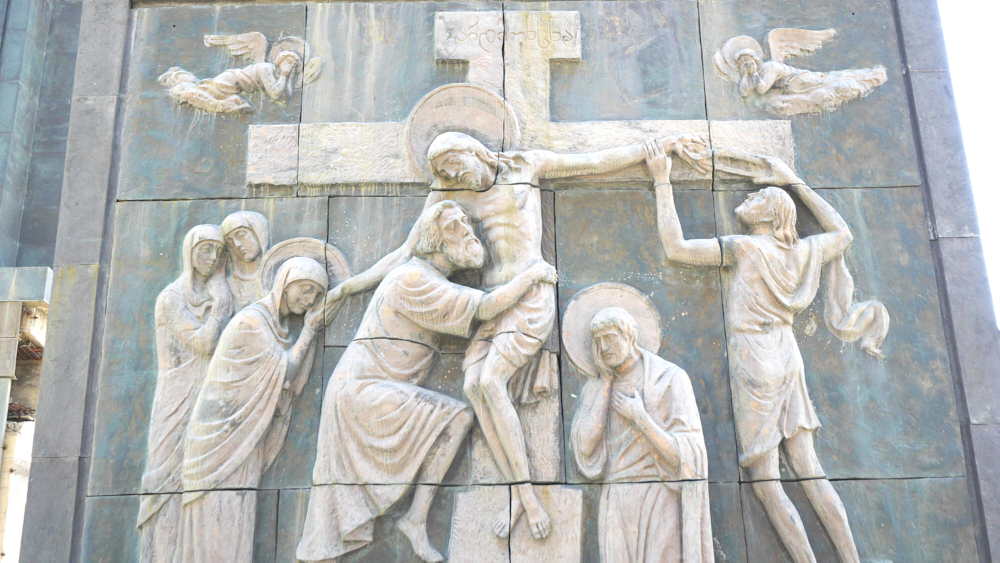 Most of the depictions from the Bible are at the bottoms of the pillars. The kings, queens, and national heroes are higher up on the pillars.

Next, we drove to Trinity Cathedral, the largest cathedral in Georgia. It’s a complex that contains several churches. There are sleeping quarters for pilgrims who come to the complex. Construction on the cathedral wrapped in 2004. 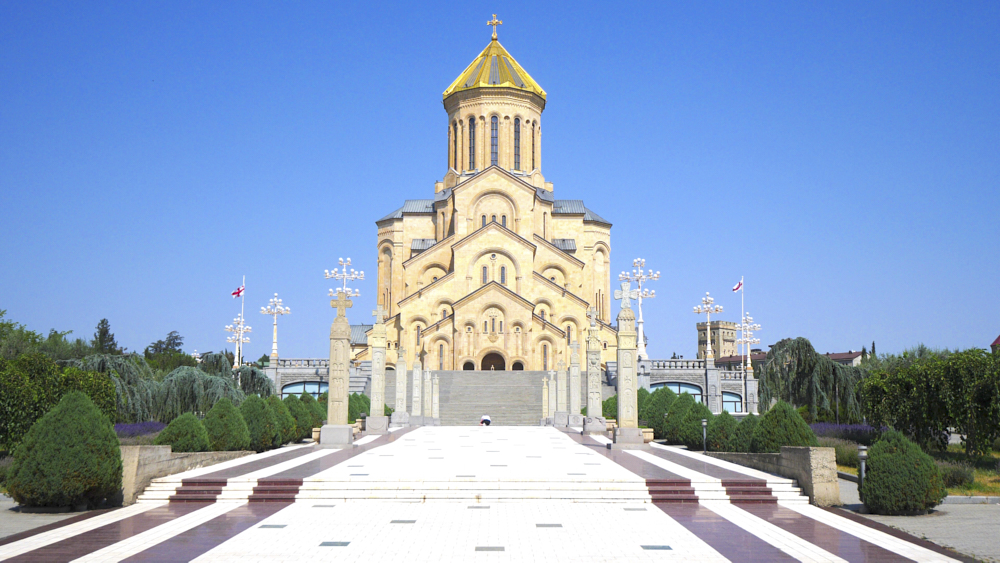 The cathedral reminded me of churches I’d seen in Etchmiadzin, Armenia. It was huge and it’s still not complete, as frescoes are still being painted. I could see a bell tower and nice views of the city. 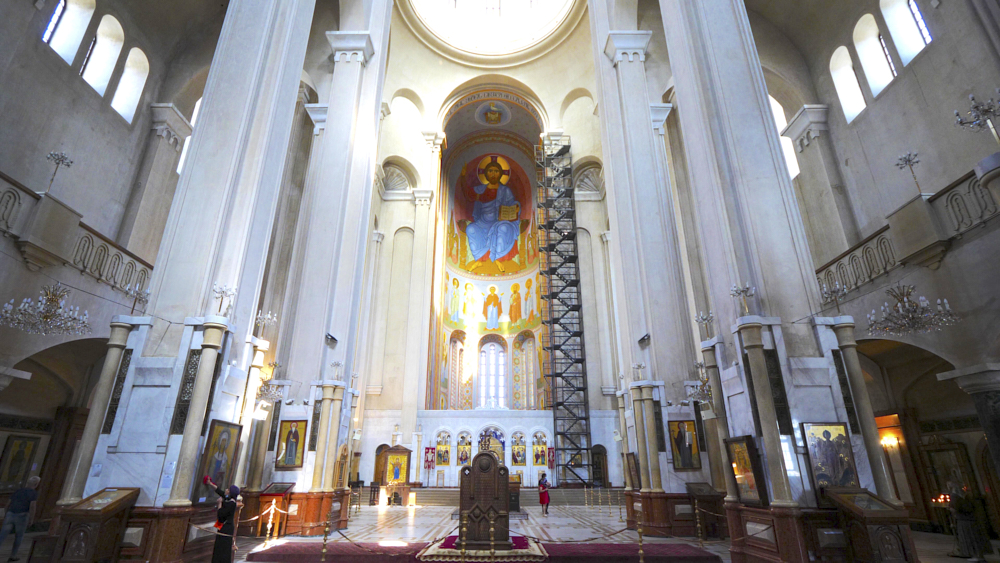 Inside the cathedral are super high ceilings and one beautiful fresco of Jesus Christ. Eventually, all of the walls and ceilings will be covered in frescoes. There are icons scattered around the church and candles that you can buy to pray for someone. 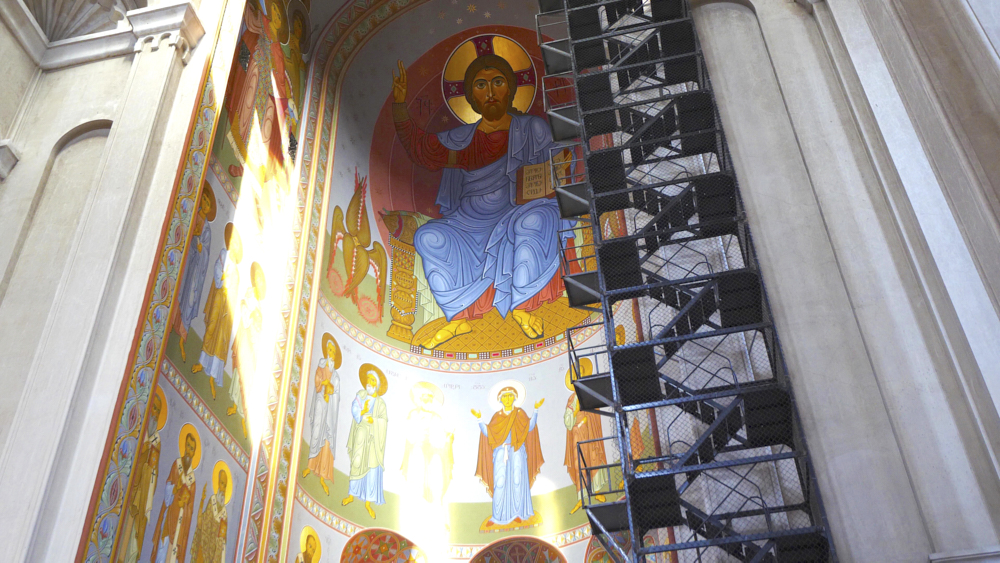 Next, we got out of the heat and drove to Poliphonia Wine Bar to have some Georgian food and wine in Tbilisi. There, they sell wines from Georgia, Austria, Germany, England, France, Italy, and Spain. I wanted only Georgian wines and some food! I was hoping for some khachapuri! 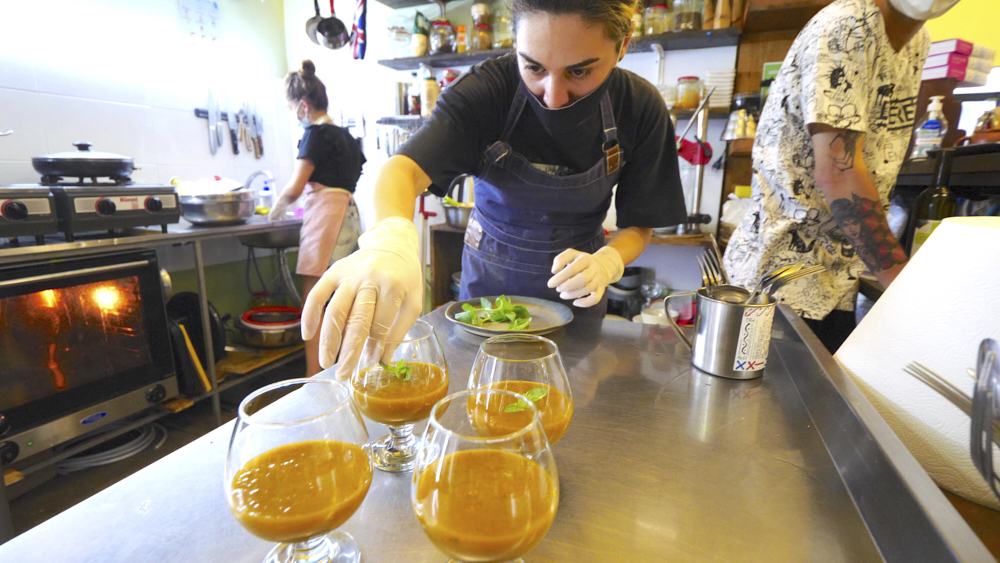 We started with some appetizers: salad, cheese, olive tempura, tomato gazpacho, and more. The gazpacho was refreshing and a little spicy, as it contained some chilies! Next was a crunchy olive tempura and a fresh, crisp salad with nuts, blueberries, and cheese.

Then, we toasted with Gaioz Sopromadze unfiltered white wine, which was light and dry. Next, I sampled some fried jonjoli and Blui’s dry white wine. But first, I tried some Georgian ricotta, and some ricotta wrapped with sulguni cheese, which was dense on the outside and soft on the inside. 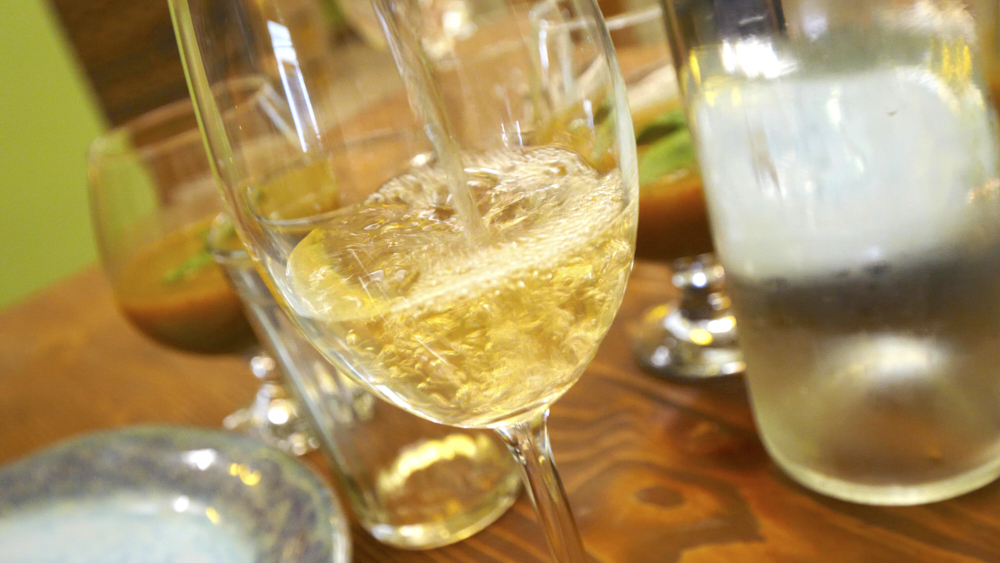 Next was khachapuri, a Georgian cheese bread. This kind was like a pizza with herbs on top. It was very herbal and full of spices, and very delicious! It also had some heat to it. 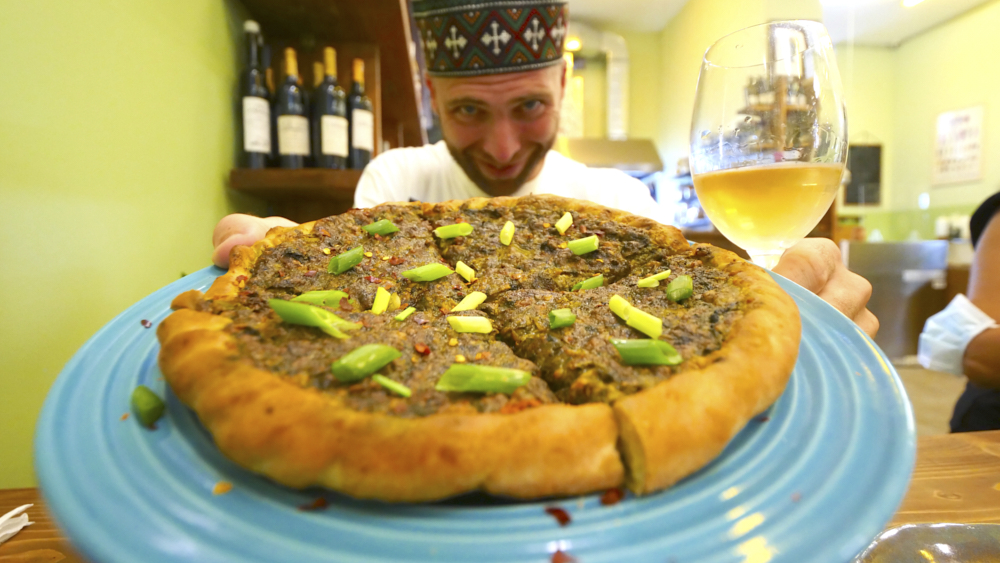 Next was a baked cauliflower cake with pine nuts, Georgian pesto, coriander, and nuts. I loved it! It was almost like cornbread! The fried jonjoli, which is a flower fritter that comes with a creamy aioli. 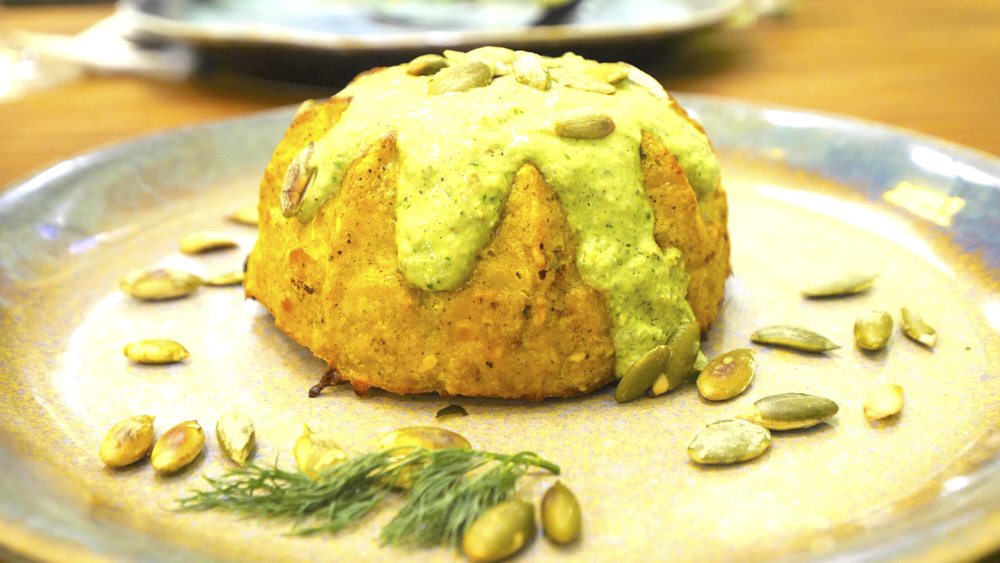 We also had vegetable khinkali, which tasted like a delicious potato, cheese, and herb gnocchi. I followed that with Alapiani unfiltered amber wine which had a beautiful orange color and was light and tasty. 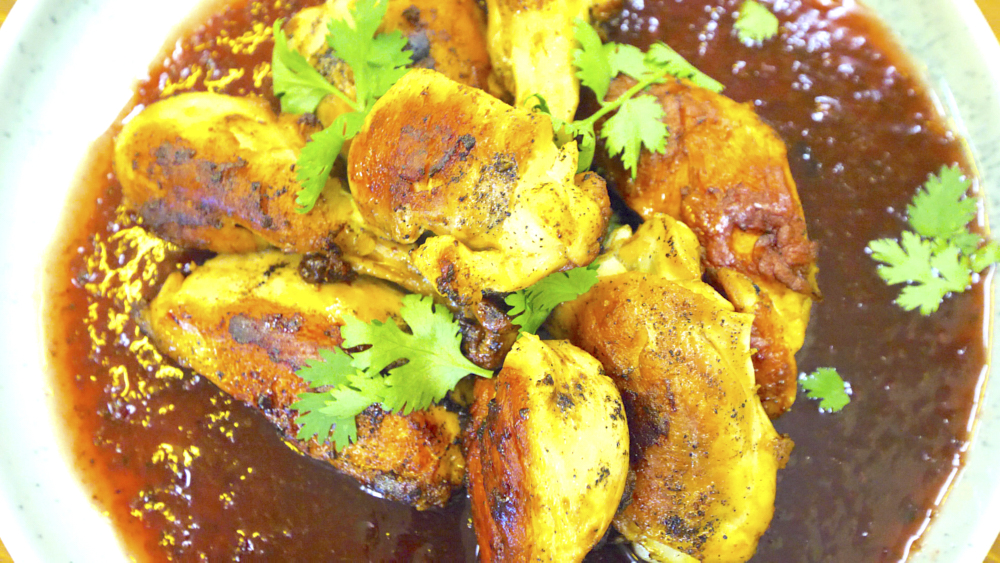 Next, I tried a 525 Saperavi Dry red wine made with one of the most unique grapes in eastern Georgia. It was really unique and super dark! We followed that with chicken with wild plum sauce and mushroom nettle salad.

The mushroom nettle salad was a little spicy and reminded me of spinach mixed with mushrooms. I loved the grilled chicken and plum sauce as well. Next, I hopped on the crème brulee for dessert. The cream with torched brown sugar were excellent. Then, I tried the Pheasant’s Tears Dry light red wine, which was like a unique ice wine! 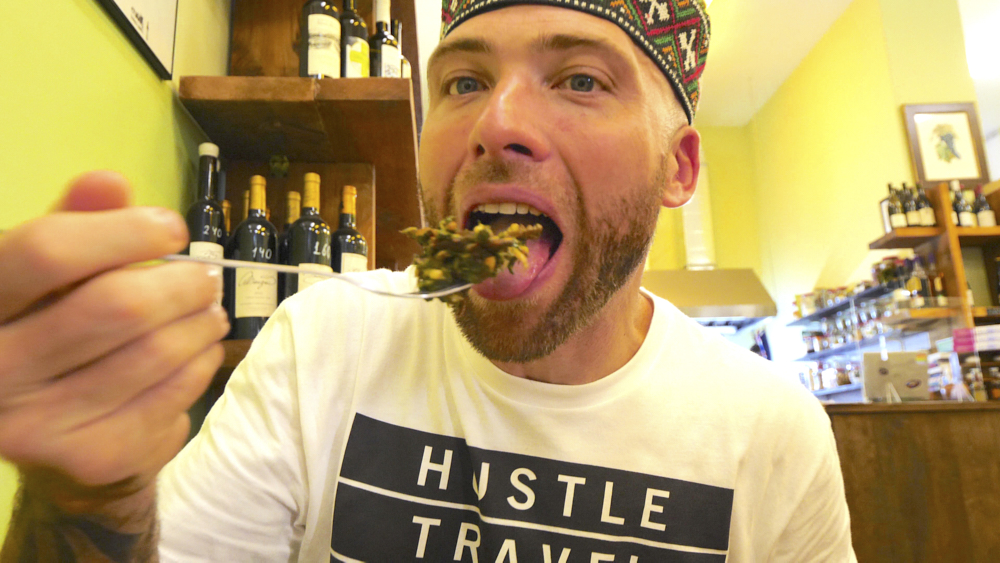 I hope you liked coming with me on my Georgian food, wine, and attractions tour in Tbilisi, Georgia! If you did, please give this video a thumbs up and leave me a comment below. Also, please subscribe to my YouTube channel and click the notification bell so you don’t miss any of my upcoming travel/food adventures!