One of my favorite things to do when I travel is to enjoy a home-cooked meal with a local family to get a true taste of daily life. I was thrilled when I got that opportunity in Georgia. Come with me as I enjoy homemade Georgian food with a local family in Mtskheta, Georgia!

Mtskheta is a small town located just 30 minutes north of the capital, Tbilisi. It was the ancient capital of the country from the 4th century BC to the 5th century AD. There, I’d learn how to make traditional Georgian dishes from a local family, check out their wine cellar, and eat some good farm-to-table food! 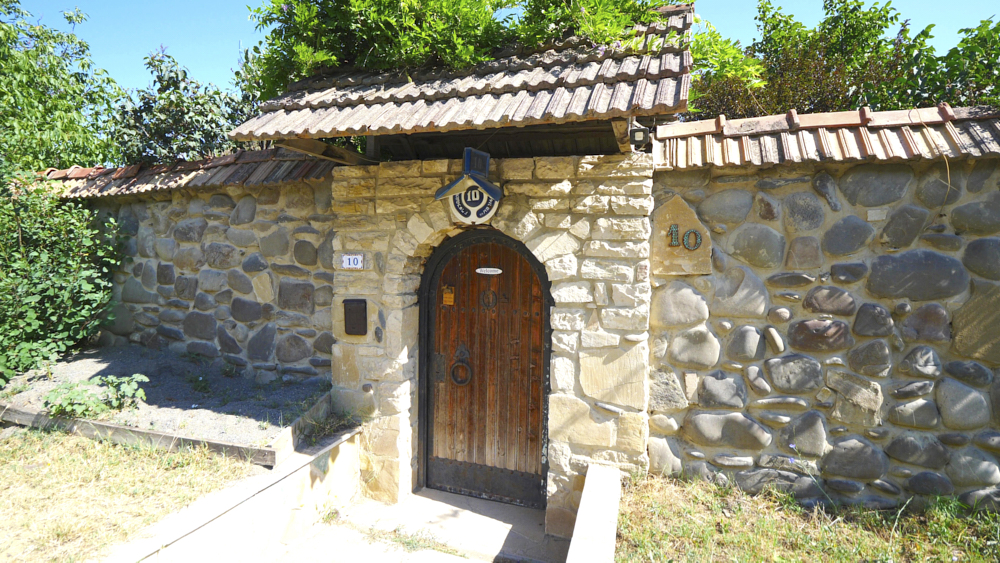 I met with Sophie, my guide from Travel Tbilisi, inside their gate. She shared some yellow cherries from their tree. Their property was amazing and overlooked the river! Then, I met Zaza, the homeowner, who was tending to a fire. 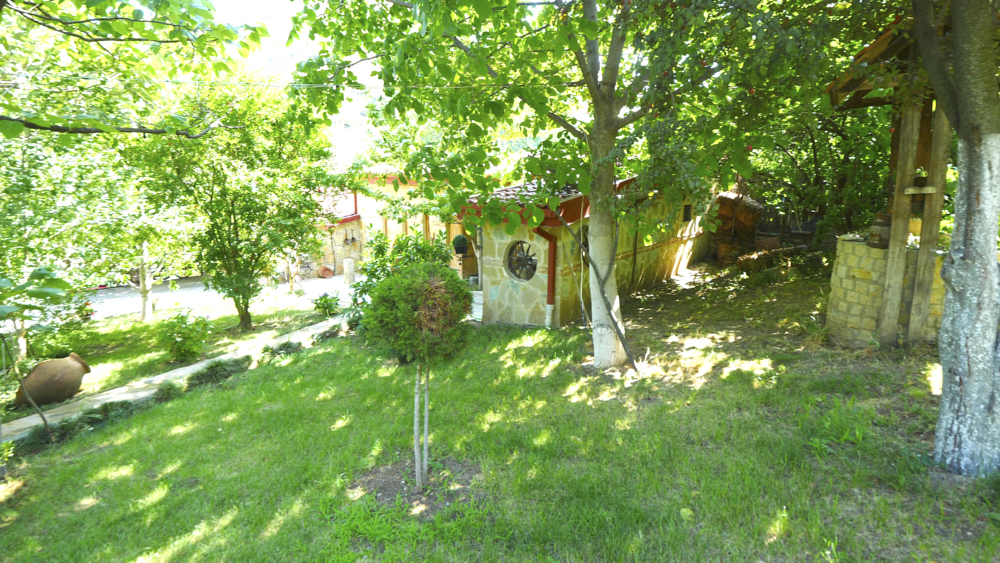 He led me to their traditional wine cellar, which is made up of clay pots set into the floor. They clean the insides of the pots with a natural “brush” made from cherry wood. They also have a pot made from a wild pumpkin to separate the juice from the fruit skin.

In the cellar, they had wines from different wineries and various tools to make wine. They have both classical (or European) wine techniques and Georgian wine techniques. I tried some Georgian Saperavi dry red wine, which is light and made from an indigenous grape. 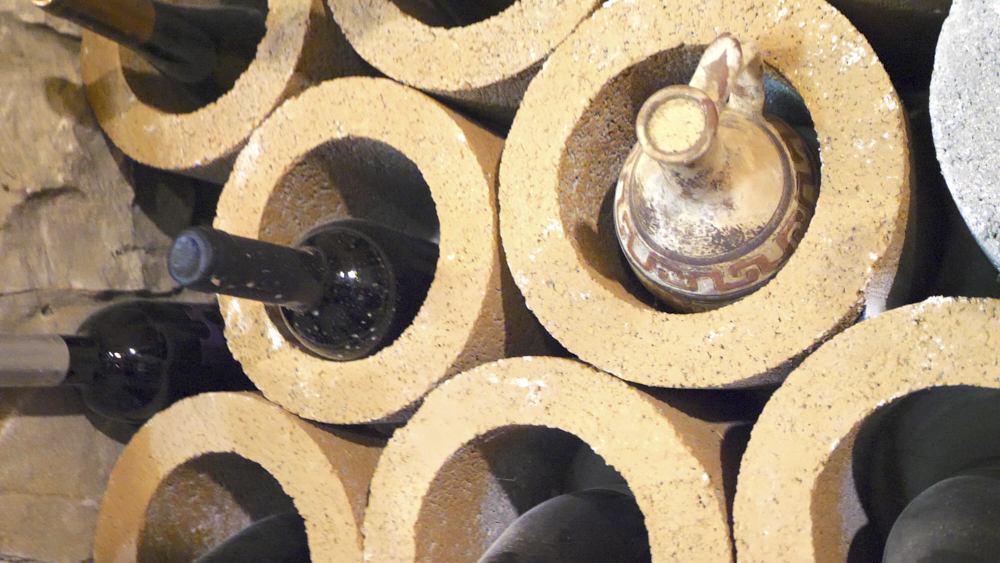 Then, we headed to an ethnographic corner, where we saw traditional tools for cooking and wine-making. They had pots, pans, machines for weaving, a piece of wood used to smash grapes that now serves as the base of a table, and more! 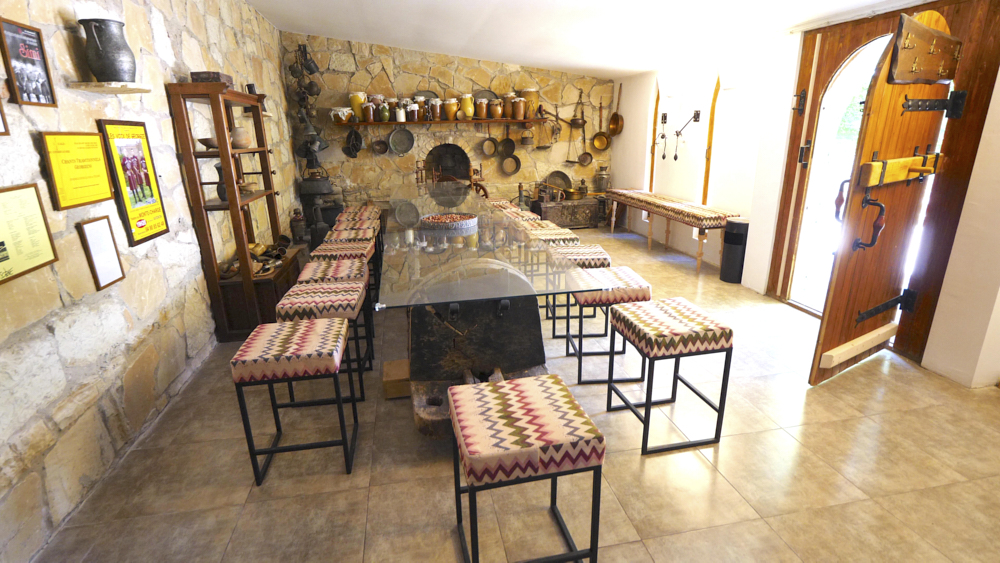 Next, we helped prepare a traditional and seasonal dish called chakapuli which contains lamb or veal, sour plum, coriander, green onion, tarragon, and garlic, wine, and chilies. I loved the aroma of the tarragon! It boils in the pot for 15 minutes. 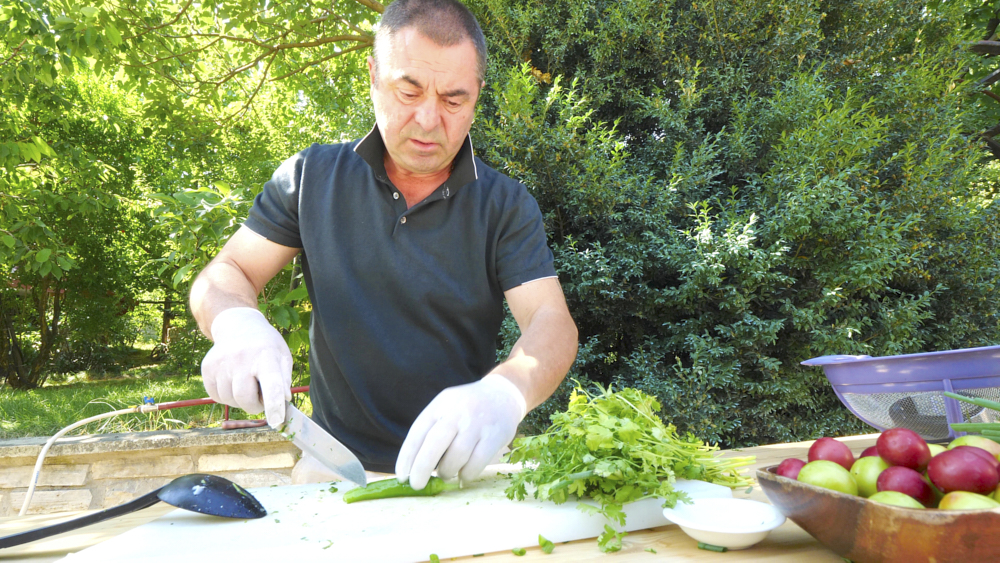 Then, we saw them make barbecued pork kebabs called mtsvadi and a fried chicken dish soaked in a milk-and-garlic sauce. It’s called shkmeruli! 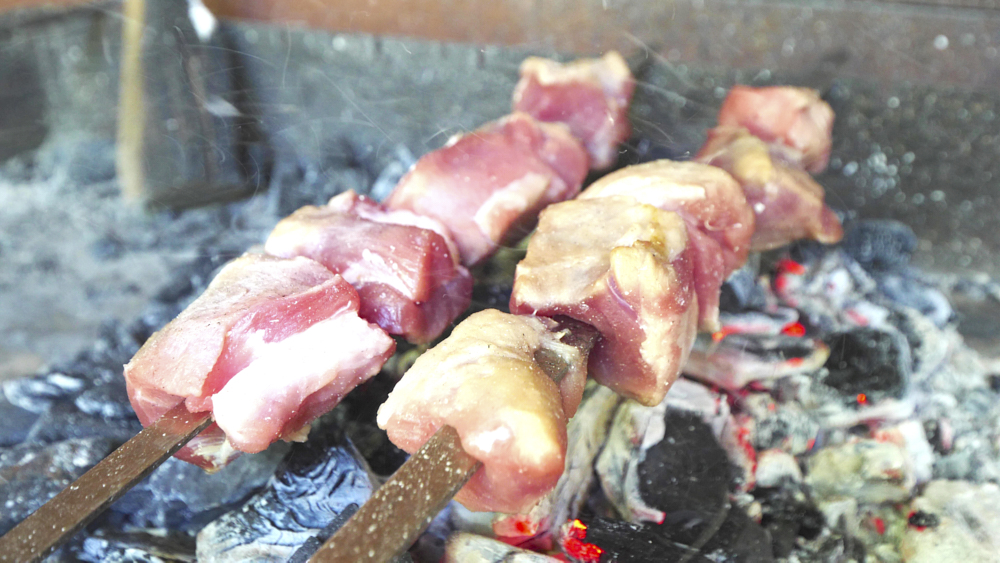 They produce their own brandy and chacha. I loved their branding! Then, we started our homemade Georgian feast! It included the chakapuli, mtsvadi, Imeretian khachapuri, shkmeruli, and more!

We started with walnut eggplant, which was super creamy and flavorful. I loved the walnut paste! I couldn’t get enough of it! 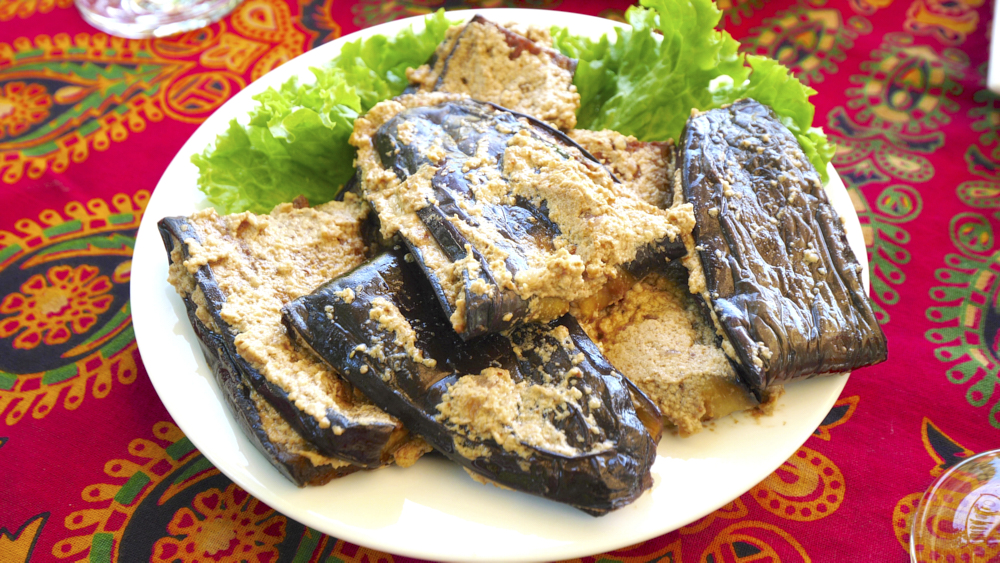 The Imeretian khachapuri was cheesy and salty and was similar to focaccia. The bread and cheese were so fresh! I followed that with a green salad with cucumber, herbs, onions, and tomatoes. It was refreshing and crunchy! 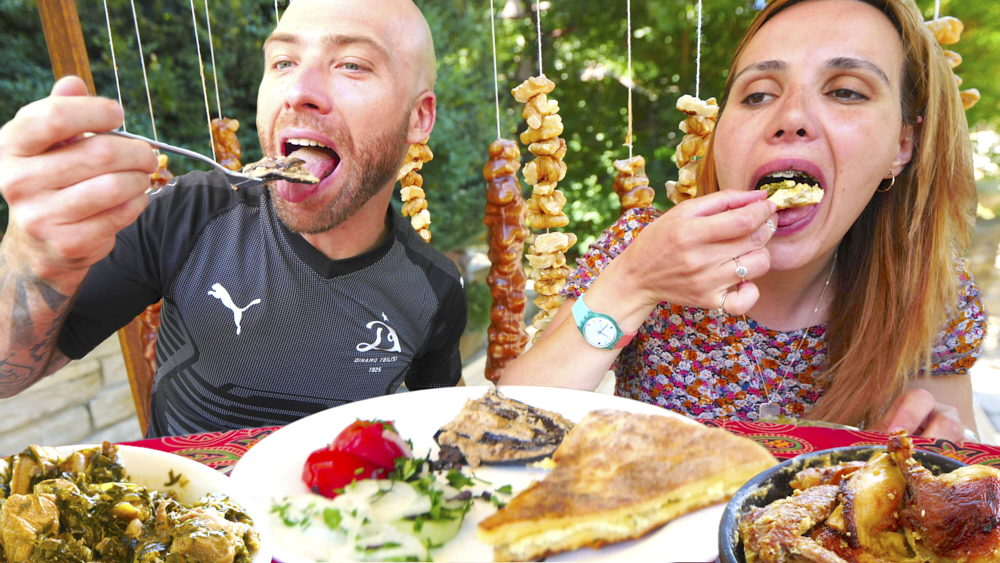 We washed it down with Kvevri wine, which was light and dry, followed by some pepper chacha. The skhmeruli had absorbed the milky garlic sauce and also contained some bread. It was unbelievable, tender, and lightly fried. I could tell it was local chicken! 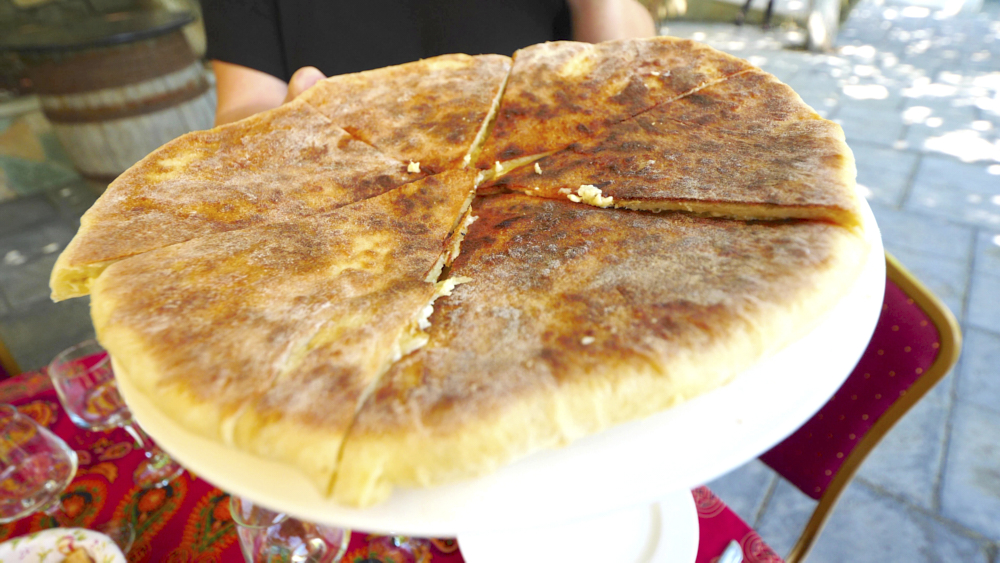 After more chacha, the homeowner toasted to Georgian women and we dug into the chakapuli. The veal mixed with the herbs left me speechless. It was so tender, fatty, and full of flavor from the slow-cooking process. 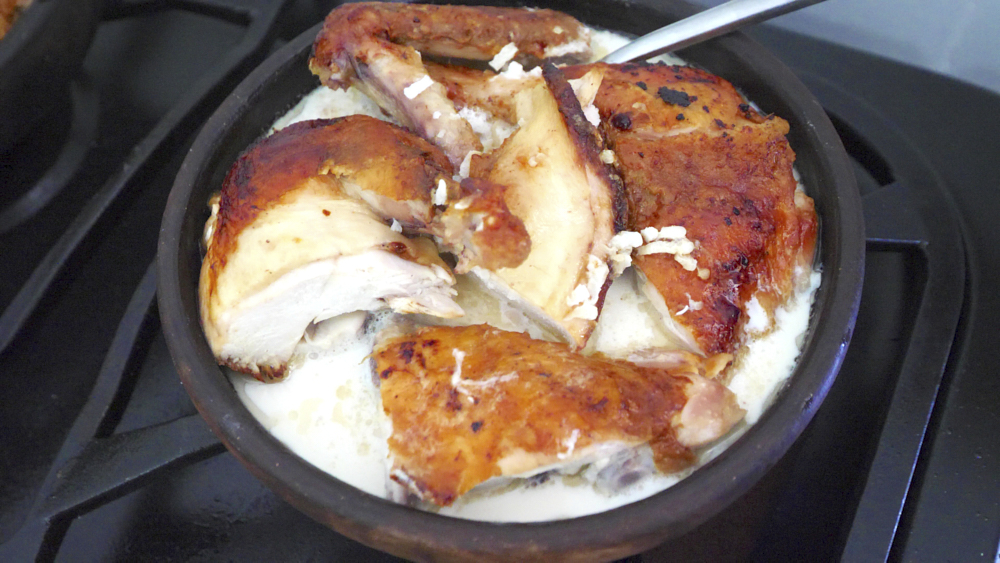 The mtsvadi was crispy, tender, and smoky. I couldn’t get enough of it. It was super fresh! I followed that with Imeretian cheese and nadughi, or cottage cheese with mint. It was buttery and amazing with the cornbread! The Imeretian cheese was similar to feta and full of holes.

I was loving the wine and culture. Then, they showed me how to make churchkhela, or Georgian candy! It almost looks like long, colorful candles hanging on strings. 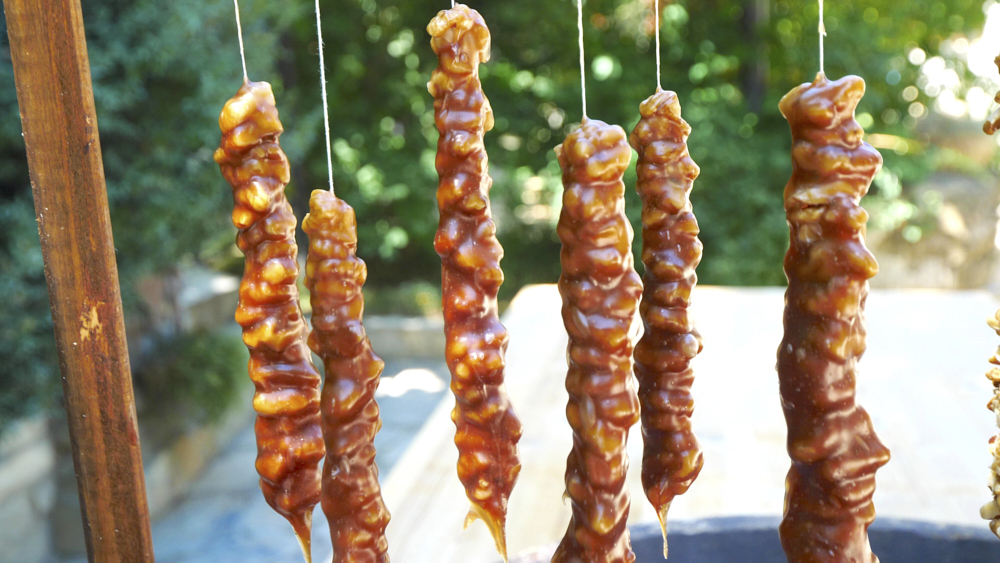 They thicken grape juice with flour, boil it for 15 minutes while stirring, and dip the string of walnuts into the paste. After it dries for a day, it’s ready! It really was like a Georgian Snickers bar and was so sticky and pasty! 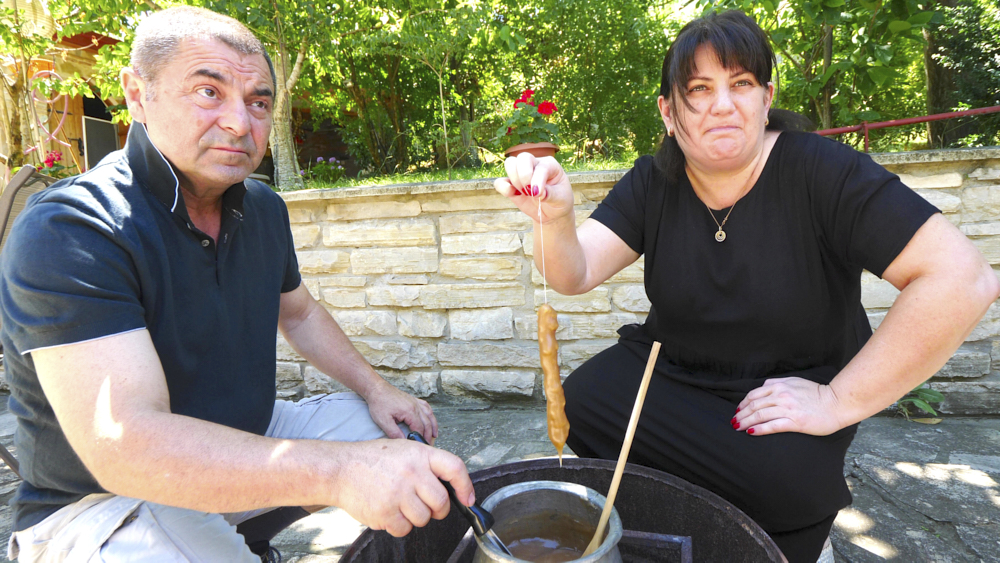 I made one churchkhela myself and got to try some later. It really was like a Georgian Snickers bar and was so sticky and pasty! Then, I also tried some of the paste, which was good enough to eat by itself! 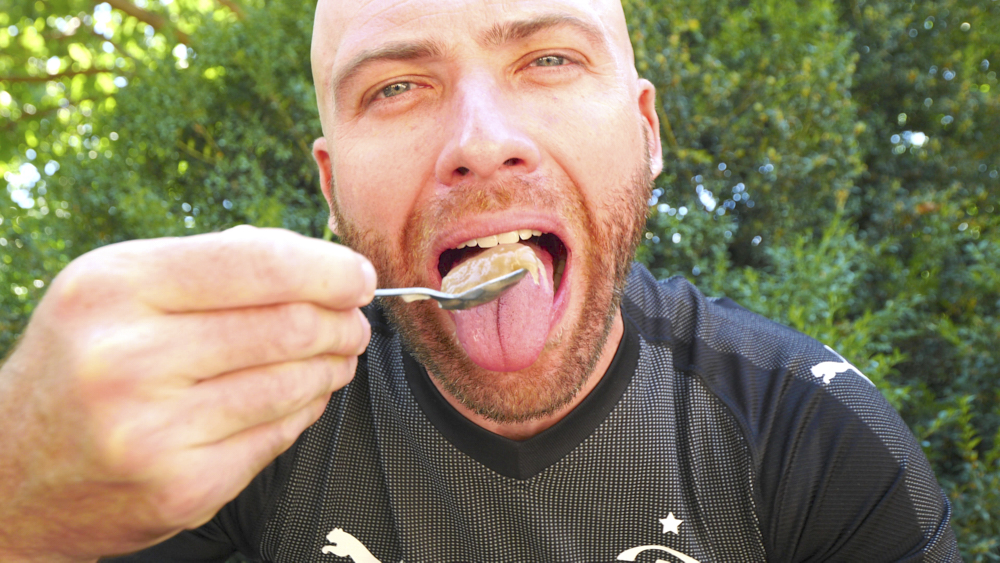 Finally, we had another drink and listen to the homeowner play the guitar and sing! What an incredible homemade Georgian food experience! 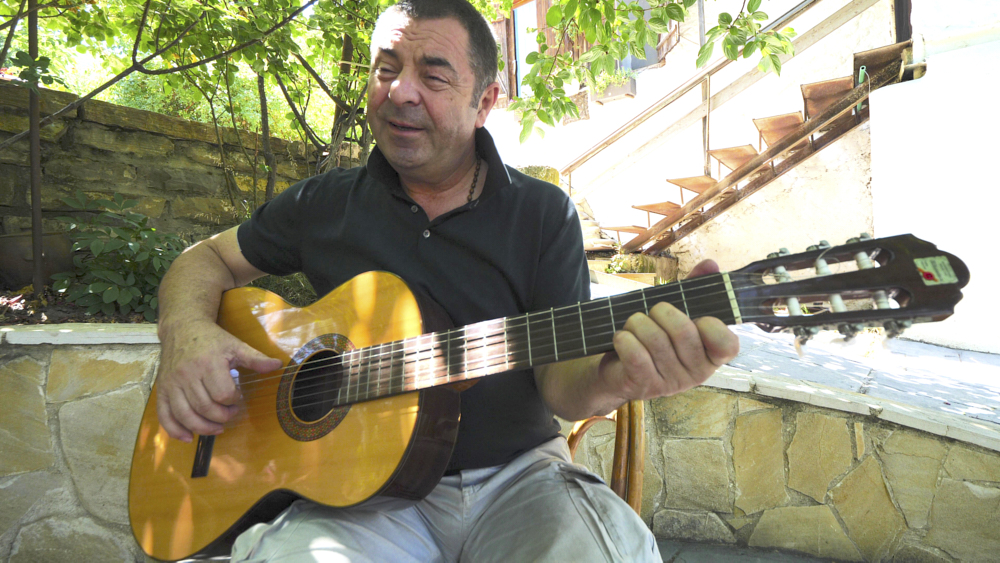 I hope you liked coming with me to try homemade Georgian food in Mtskheta, Georgia! If you did, please give this video a thumbs up and leave me a comment below. Also, please subscribe to my YouTube channel and click the notification bell so you don’t miss any of my upcoming travel/food adventures!