My time in the beautiful Kakheti wine region in the Republic of Georgia continued with another unbelievable food and sightseeing adventure. Come with me as I take you to experience the attractions and Georgian food in Signagi, Georgia!

Signagi (also known as Sighnaghi) is known as the City of Love. It’s one of the country’s smallest towns but is home to beautiful landscapes and cobblestone streets. It’s also known for its 18th-century walls and towers, and for its two Georgian Orthodox churches. 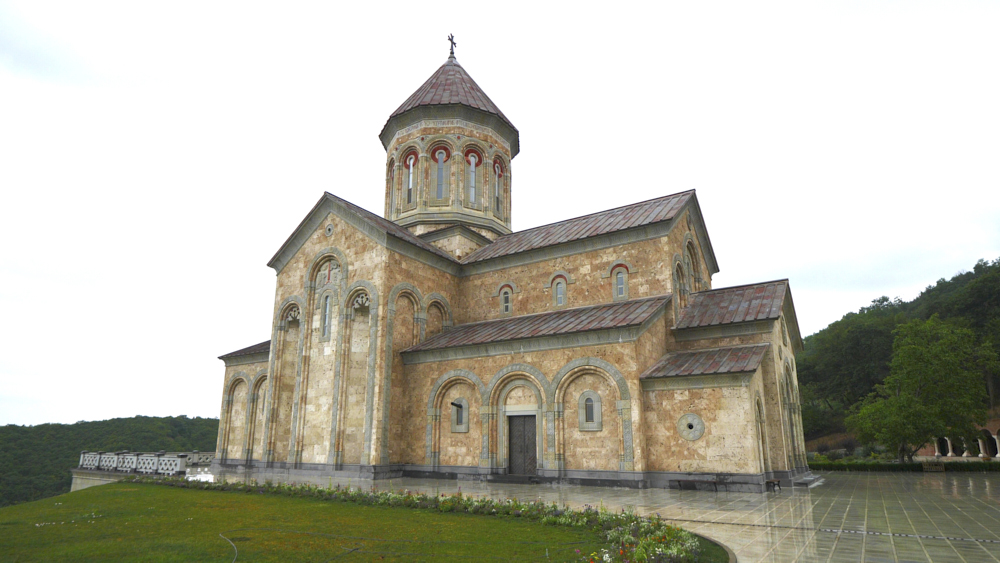 My friend Tim from Friendly GE and I started our morning at Bodbe Monastery, the largest monastery in Georgia. It’s one of the most important centers for Christianity in Georgia and was originally built in the 9th century. It has been remodeled since then, especially in the 17th century, and the church is now only a few years old. Bodbe Monastery is also a major pilgrimage site and is now a nunnery. 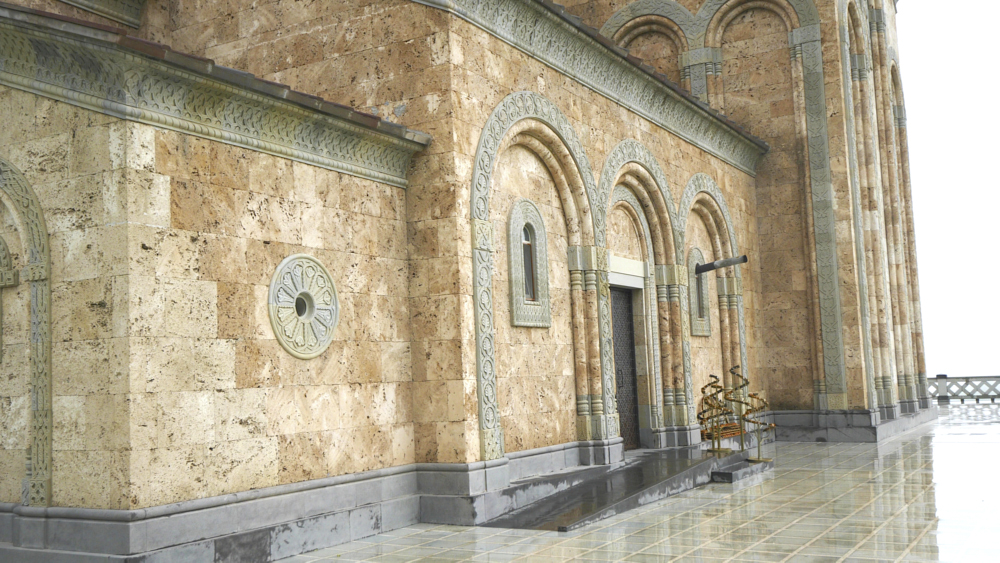 It was founded by St. Nino, a woman who was one of the first people to preach Christianity in Georgia. Her grave is located inside a brick church on-site and the monastic complex also includes a holy spring. 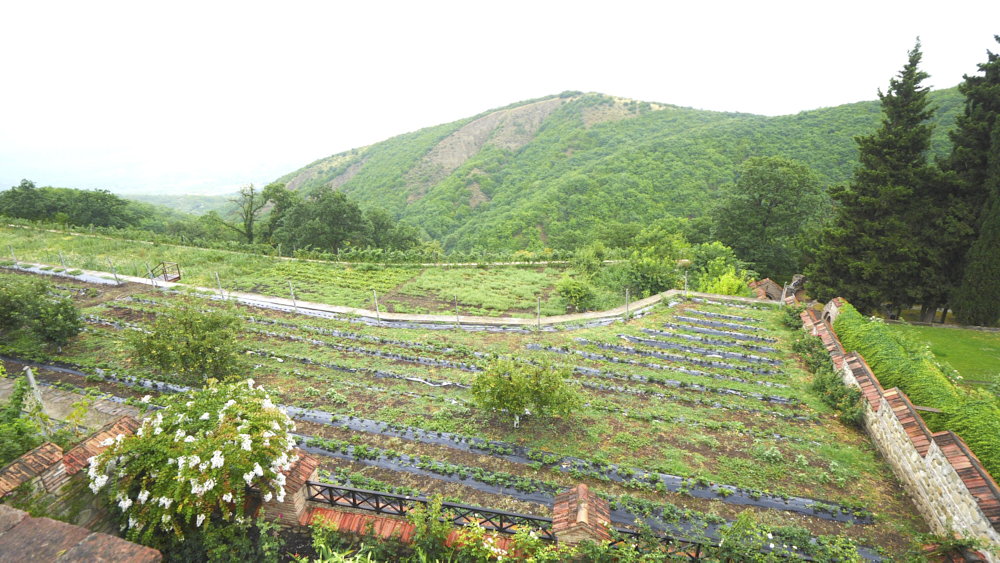 The entire monastery overlooks the Alazani Valley, one of the best places in Georgia for growing wine. It’s full of vineyards and wineries!

Then, we hopped in the car, drove back to Lost Ridge Inn, and then made our way to Signagi. They have a place in town where you can get married 24/7! 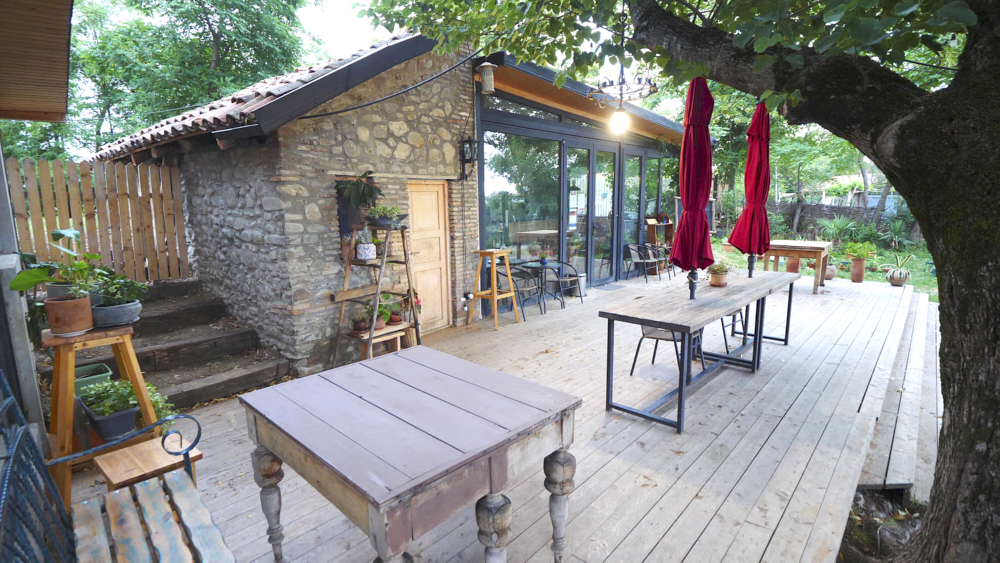 On our way into town, we stopped at a viewpoint next to a zip-line attraction called Zip Extrim Sighnaghi, where we got amazing views over Signagi. We could see part of the city walls. 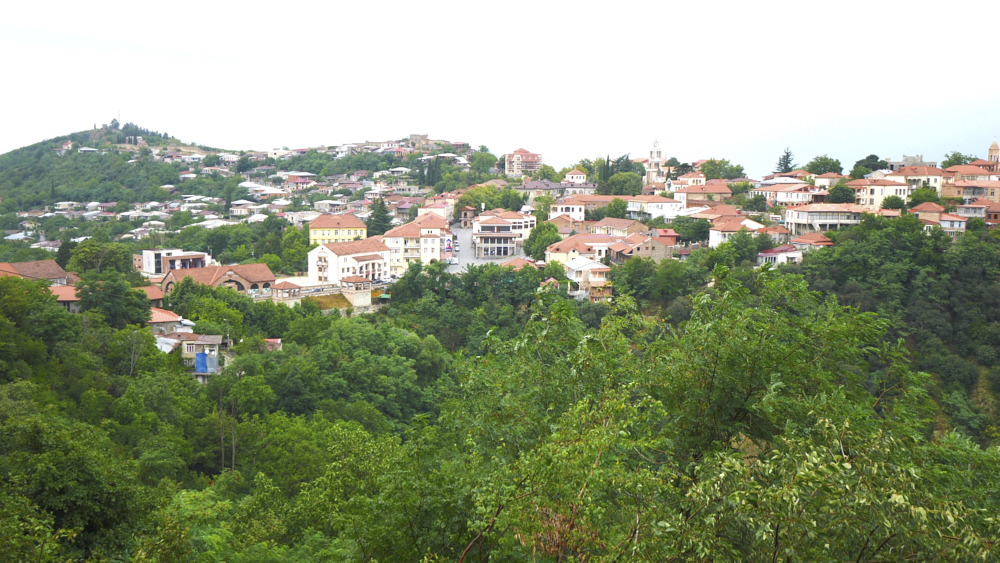 After a one-minute drive, we made it into town. Signagi reminded me of old Italian towns with cobblestone streets, colorful homes with balconies, and beautiful architecture. 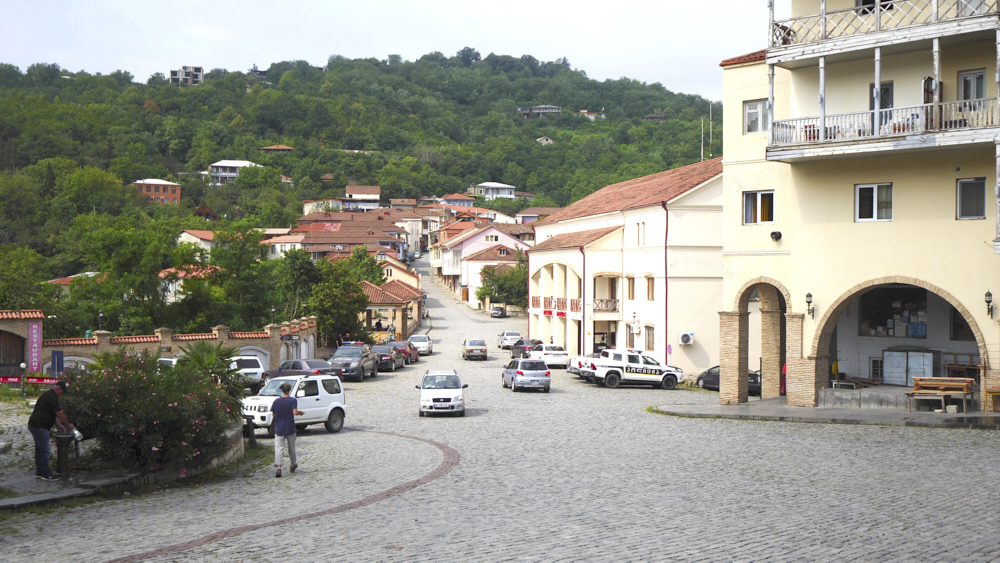 In the main square is a fountain and the wedding palace, as well as food vendors, a bank, a market, and souvenir kiosks. We saw the wedding palace, which is a beautiful old house with big balconies, and then made our way up to the city hall a the top of the town. 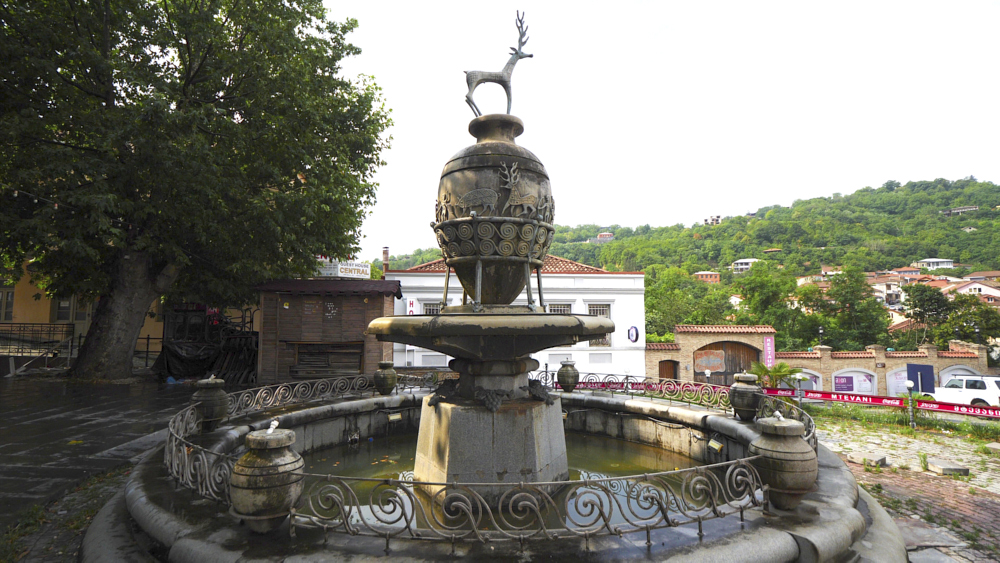 Along the way, we walked the cobblestone street past small bakeries selling bread, khachapuri, omelets, and more; a few more souvenir shops; and vendors selling traditional knitted goods like socks, bags, and slippers out of wool and felt. They also have traditional hats.

I bought a heart-shaped bag for my oldest daughter and a few more for family. There’s a parka and playground near the city hall. There are more vendors in the area. We could see the valley below us as we came upon part of the old city walls and a 300-year-old watchtower. 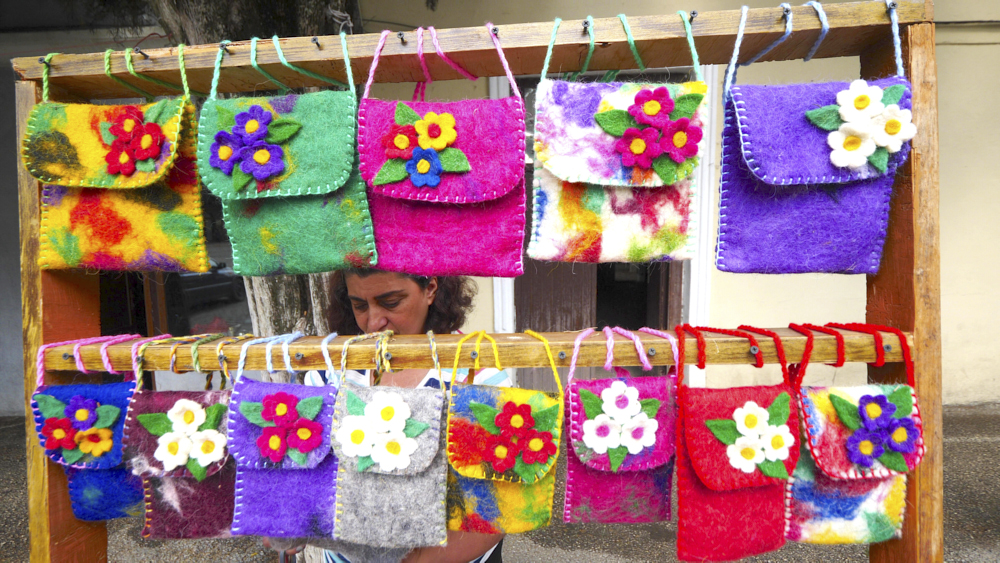 The city has expanded outside the walls. Inside the walls, through the brick arch, we saw more vendors selling woven carpets with beautiful dyes and patterns. We met a 90-year-old woman who knits socks, hats, shoes, and more out of wool. I bought a hat for 25 GEL, or about $8 USD. They also gave me a gift! 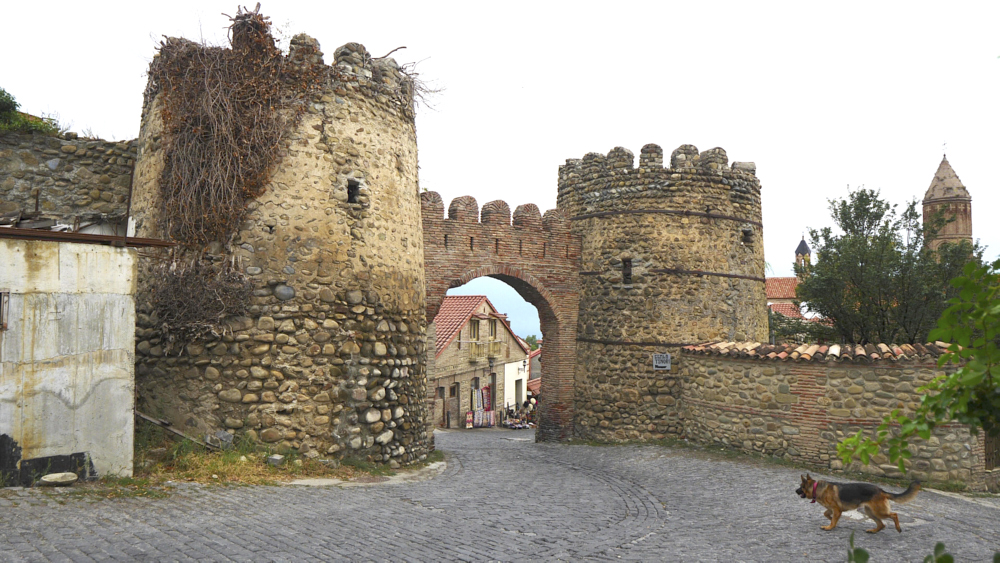 Along this street are souvenir shops and guesthouses. We arrived at Kusika Restaurant, where they were making khinkali, kebabs, and more. The restaurant is also a guesthouse with a pool, a terrace, and three rooms! I couldn’t wait to try more hearty Georgian food here in Signagi, Georgia! 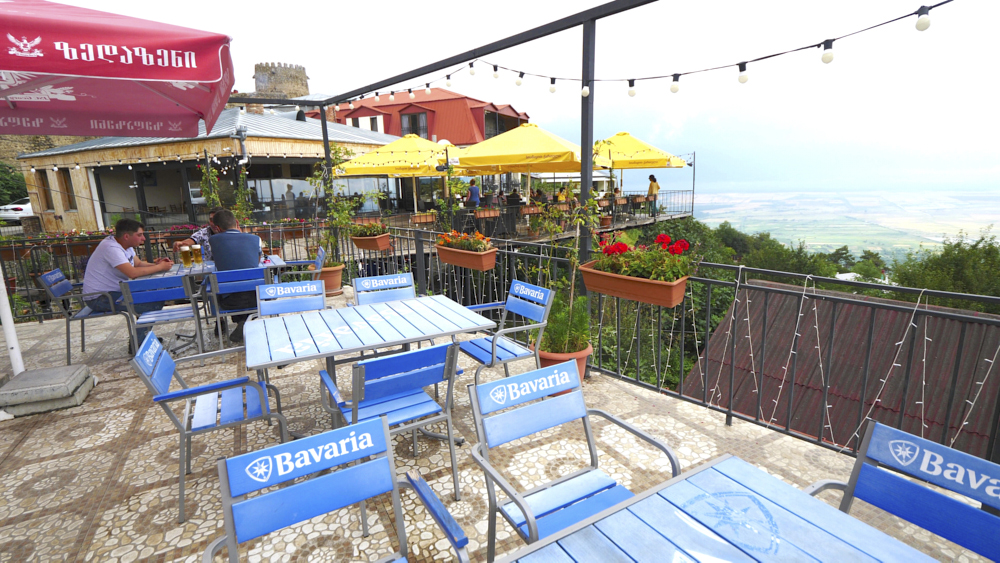 They also made a grilled khachapuri on a stick, which looked a lot like a tequeño. Then, I tried some strong peach chacha, a nice oak chacha, and some tarragon chacha. 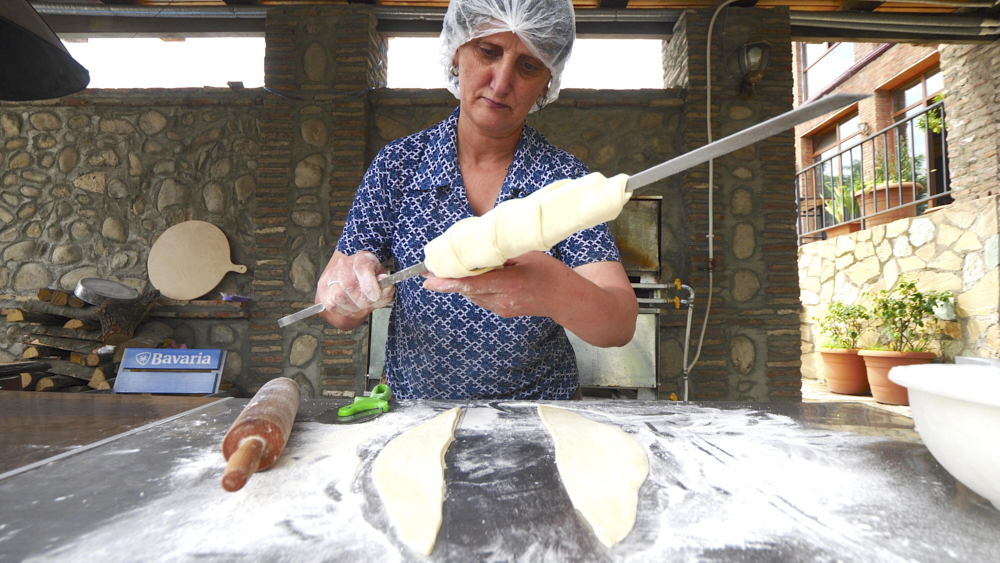 I started with some qababi; salad with tomatoes, cucumbers, and walnut paste; shkmeruli; eggplants and peppers stuffed with walnut paste; chakapuli with plums and tarragon; and bread.

The red pepper and eggplant stuffed with walnut paste were soft and tasty and I loved the walnut. The grilled khachapuri was overflowing with gooey sulguni cheese and the beef-and-pork qababi was tender and flavorful. 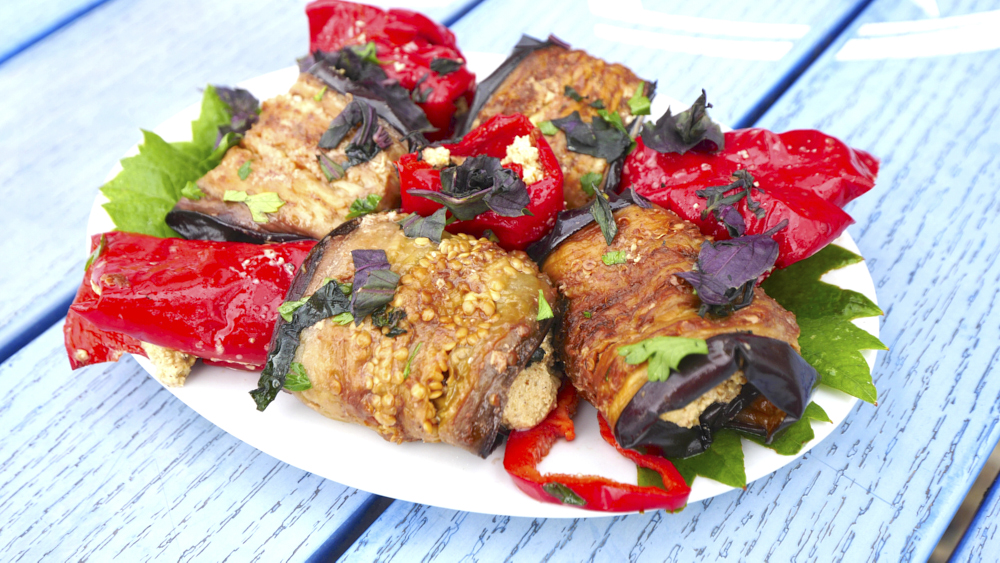 The shkmeruli had a nice creamy garlic sauce and the lamb in the chakapuli was tender and the herbs were delicious! The salad was also exceptional. But I couldn’t get over the chakapuli. The sour broth was fantastic! 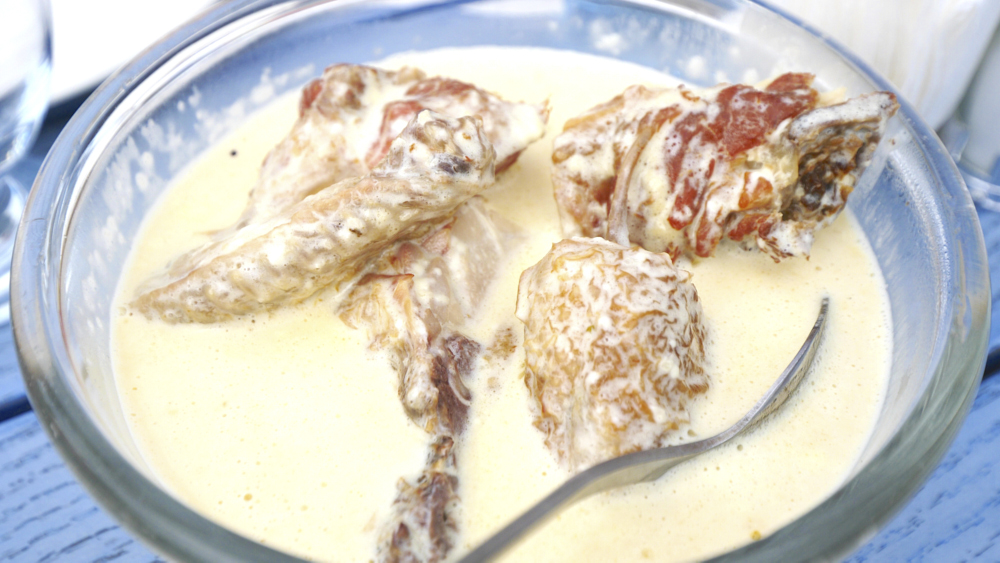 The bread in the creamy shkmeruli sauce was also unbelievable. I washed it all down with some tarragon soda, which was very herbal and bubbly. 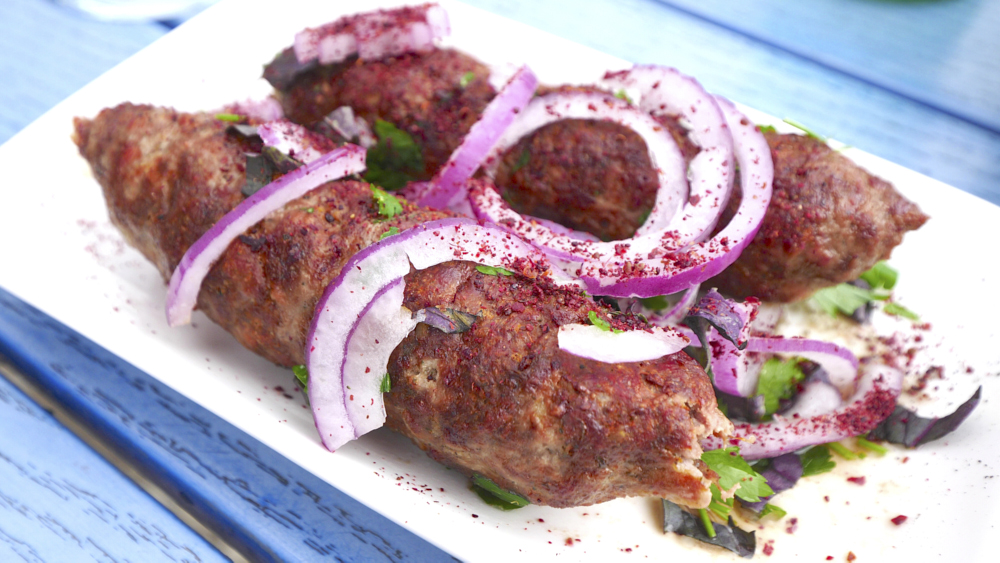 Then, they made me a kebab with eggplant, minced meat, two chilies, an onion, and peppers stuffed with meat on a skewer. It came with a secret walnut-based sauce, which was like a walnut-and-eggplant chimichurri. 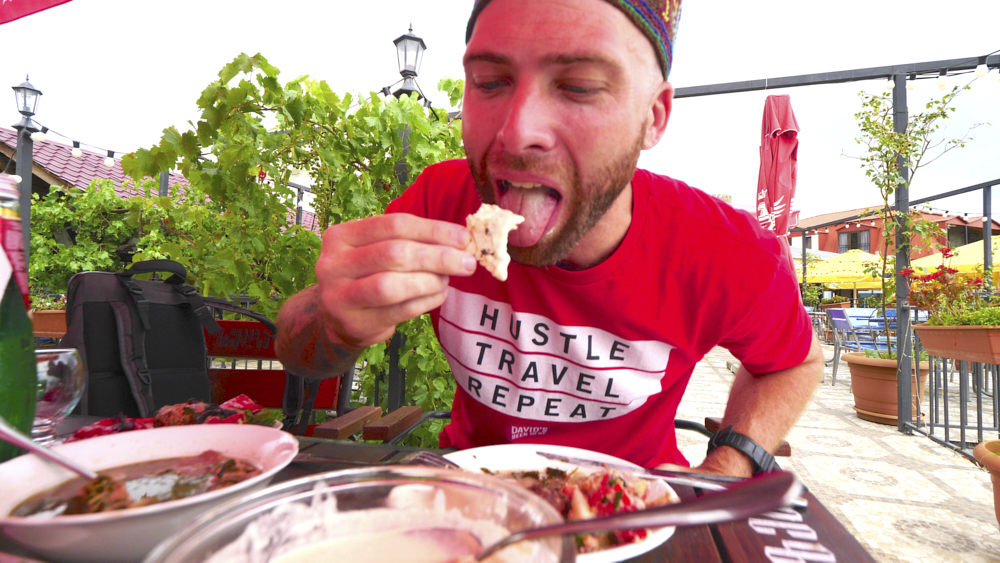 I loved it with the spicy meat! I finished off with some tarragon chacha, which was quite strong. What an amazing Georgian food experience in Signagi, Georgia!

Check out the Top Things to Do in Tbilisi, Georgia

Next, we climbed up the city walls. From the top, we could see the lower town and more walls. What an impressive view! 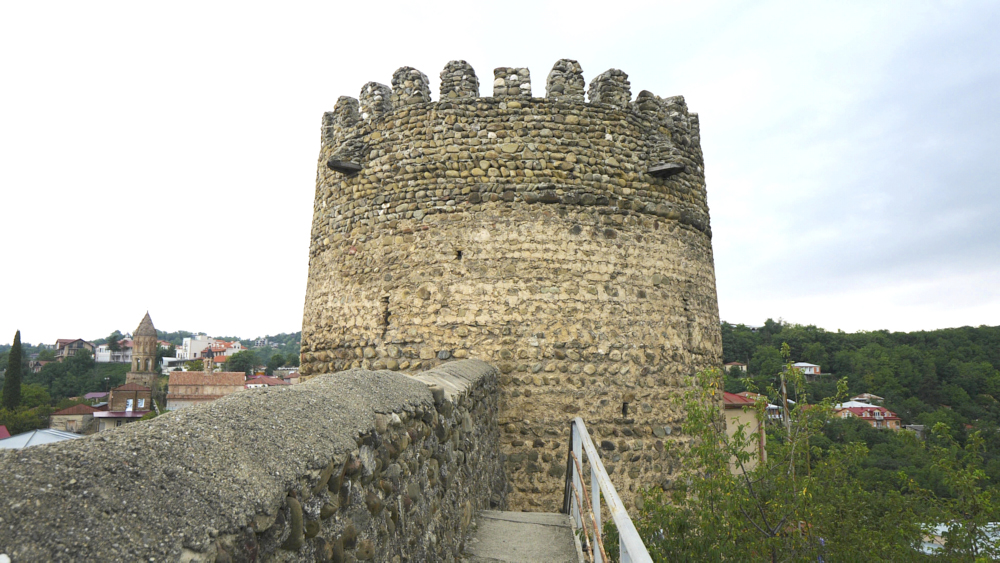 I hope you liked coming with me to try Georgian food in the medieval town of Signagi, Georgia! If you did, please give this video a thumbs up and leave me a comment below. Also, please subscribe to my YouTube channel and click the notification bell so you don’t miss any of my upcoming travel/food adventures!