My incredible time exploring the Republic of Georgia continued with a road trip to the tiny town of Stepantsminda, also known as Kasbegi! Come with me as I take you with me to have some delicious Georgian food and visit some attractions as I explore the birthplace of khinkali in Kasbegi, Georgia!

My guide Tim from Friendly GE and I began our afternoon with a drive along the Georgian Military Highway to the extreme northern part of Georgia. Kasbegi is a beautiful alpine town surrounded by mountains located just 12 kilometers south of the Georgia/Russia border. 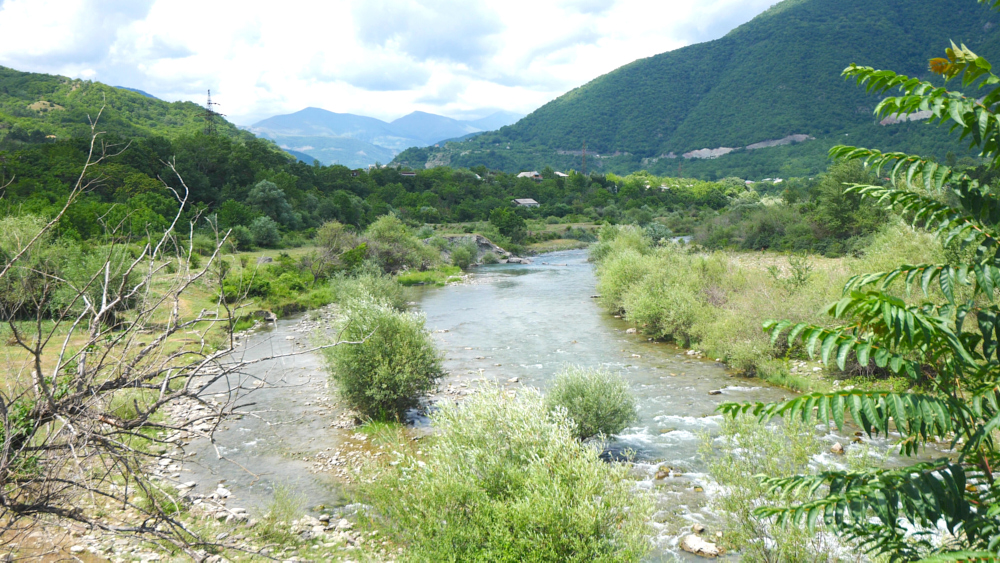 On the way, we’d visit Pasanauri, the birthplace of the khinkali, a Georgian dumpling that is a staple around the country. It’s a winding road through the mountains and I couldn’t wait to eat some! Along the way, we passed by a gorgeous, blue reservoir that reminded me of Lake Koman in northern Albania. We came upon a market next to the reservoir where the vendors sold souvenirs and Turkish sand coffee. The coffee was great! 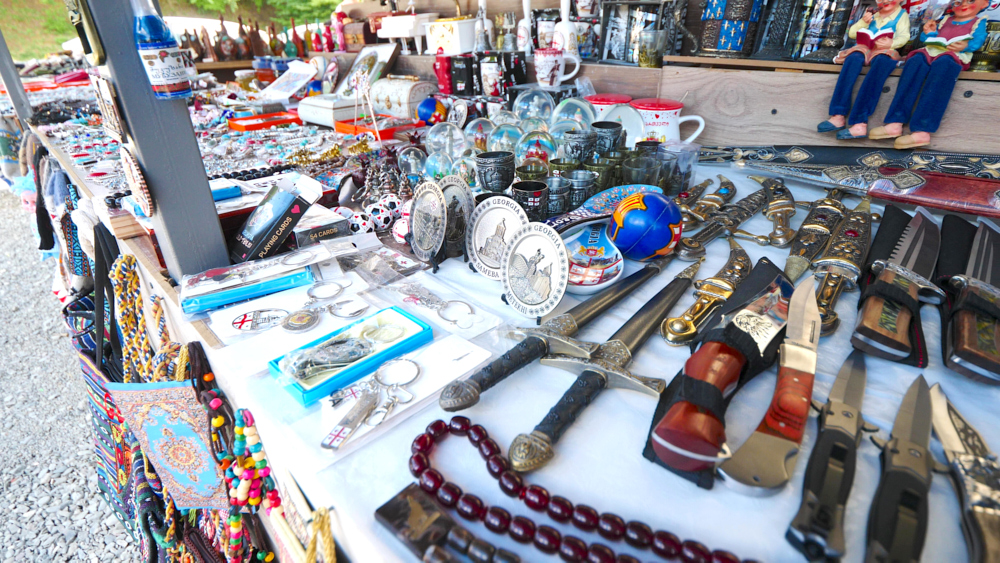 I suggest bringing a sweater when you travel to Kasbegi, as it can be cold even in the summer. Eventually, we arrived at Ananuri Fortress, which protected against invaders from the north and contains two historical churches. It overlooks the reservoir! 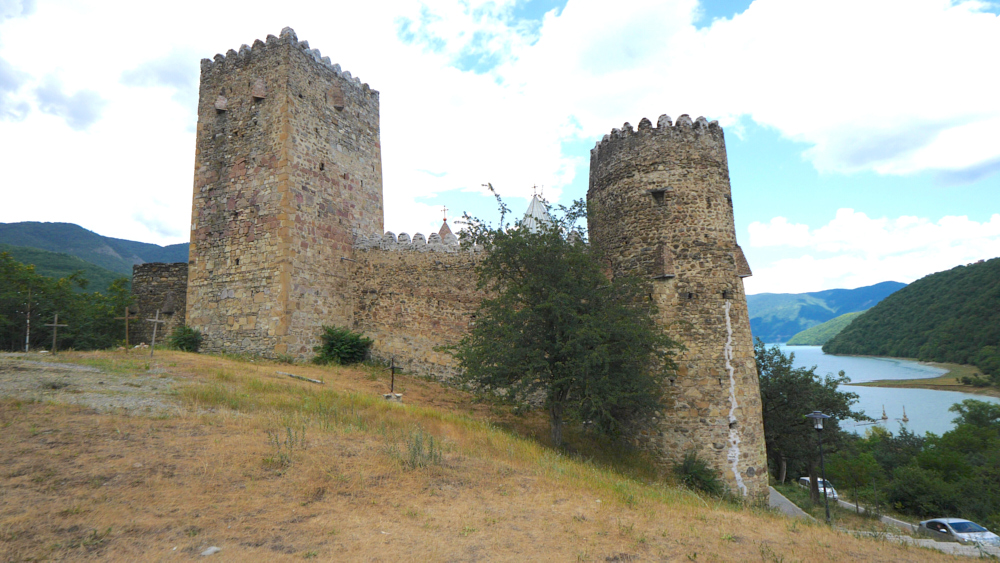 The oldest tower in the fortress dates back to the 14th century. One of the churches is from the 17th century and the other is from the 18th century. The tower reminded me of ones I’d seen in Italy. The church’s walls are inscribed with Georgian script.

The exterior of the 18th-century church also features a lot of grapevine carvings, as wine is a big part of the culture. It’s reflected in the religious architecture! 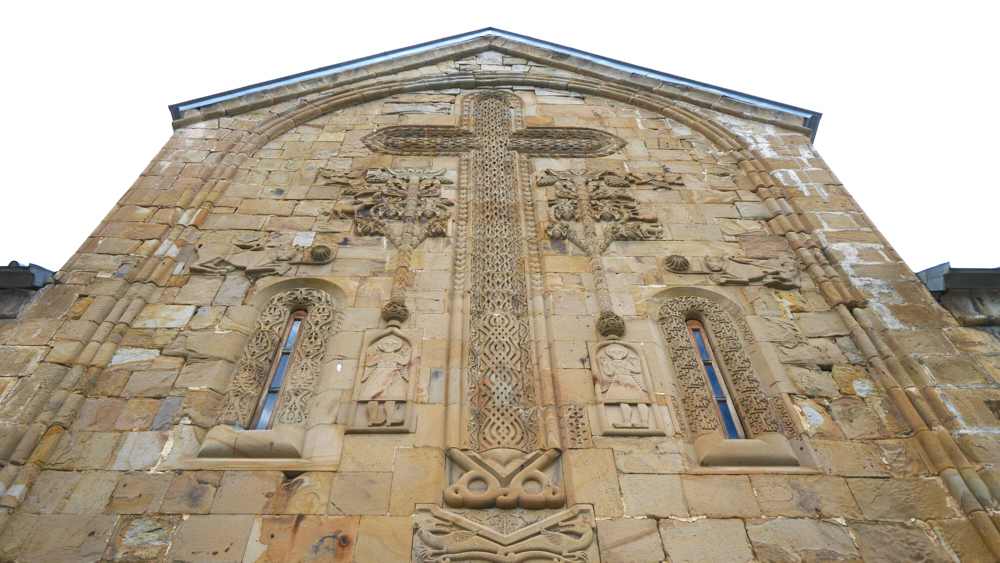 Inside the church were old frescoes from the 17th century and plaster from the Soviet era when they whitewashed the walls. Some of the frescoes were able to be restored. The frescoes featured Jesus and saints, as well as a depiction of Hell. There are also Russian-style icons along one of the walls.

As you leave the church, you get great views over the reservoir and the belltower. We continued on along a river. We reached the confluence of the White and Black Rivers and stopped at Guda Restaurant, a modern but rustic restaurant in Pasanauri. This area is the birthplace of khinkali in Kasbegi, Georgia, so the art of making them is ingrained in the culture here. 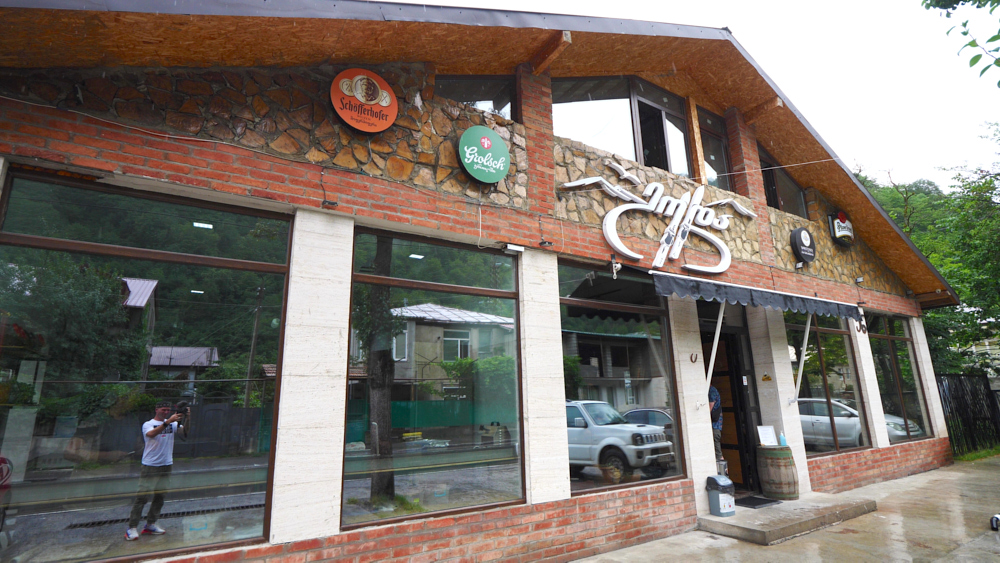 Inside the kitchen, I watched the cooks make some khinkali! We’d be eating five varieties: beef and pork, mushroom, potato, cheese, and garlic. The beef and garlic ones are traditional and were born in Pasanauri! I’d also have a dish that looks like a huge khinkali and is filled with cheese and beet leaves. 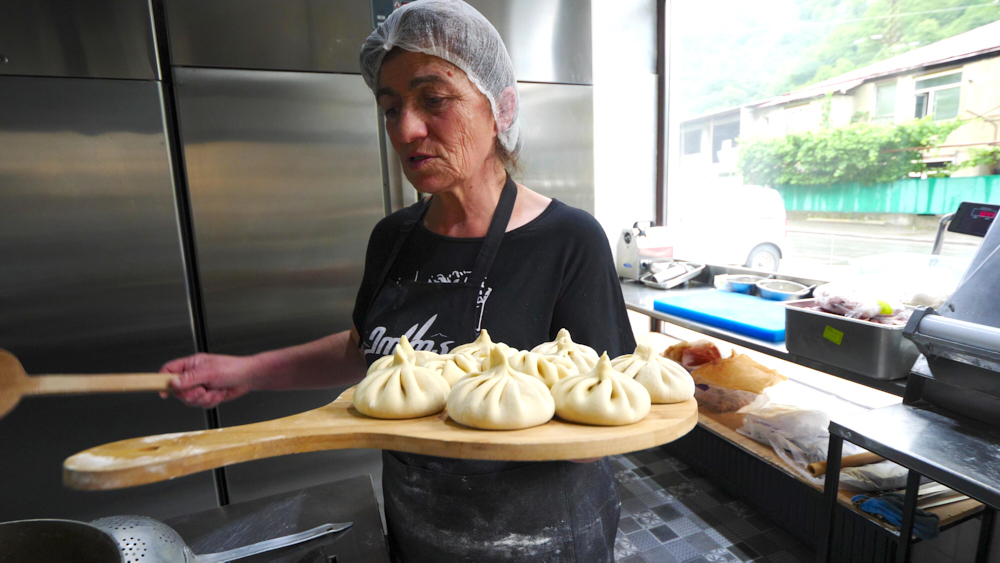 The cook fed me a bit of the filling, which was so tasty. I loved the fresh cheese and the herbs. We’d also have some chacha and craft beer! 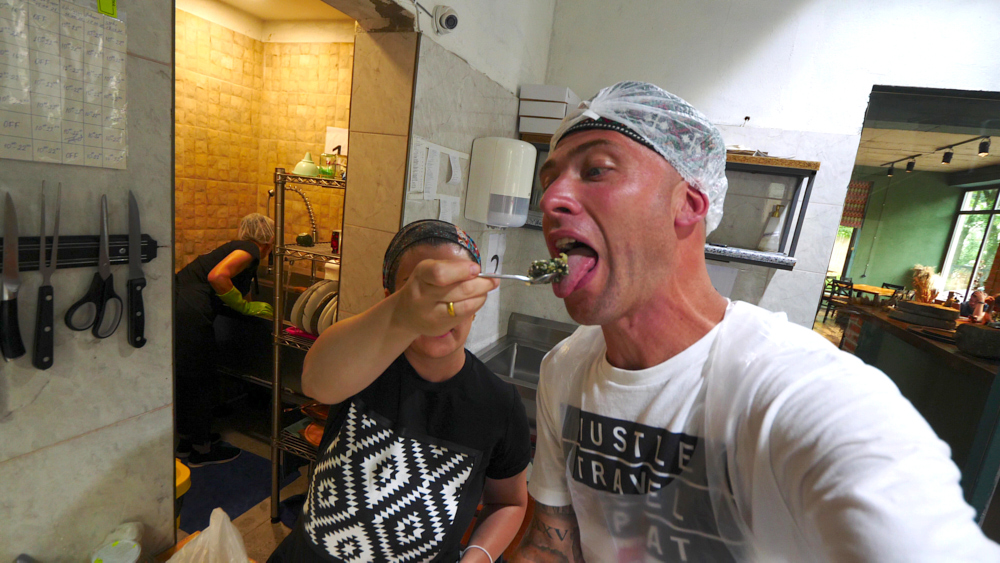 At my table, we had five types of khinkali. I started with the lamb khinkali, which was so juicy and very different from the beef and pork. The garlic khinkali was shaped differently, like a pierogi, and was unbelievable. The tarragon chacha was really nice, and the mushroom khinkali was spicy and doughy with lots of nice herbs. I loved it!

The Osettian beet top & cheese pie was earthy and herbal, almost like a beet root and cheese pizza. I loved it! Next were the potato khinkali with black pepper, which was almost like a big potato gnocchi. My favorite was the lamb! 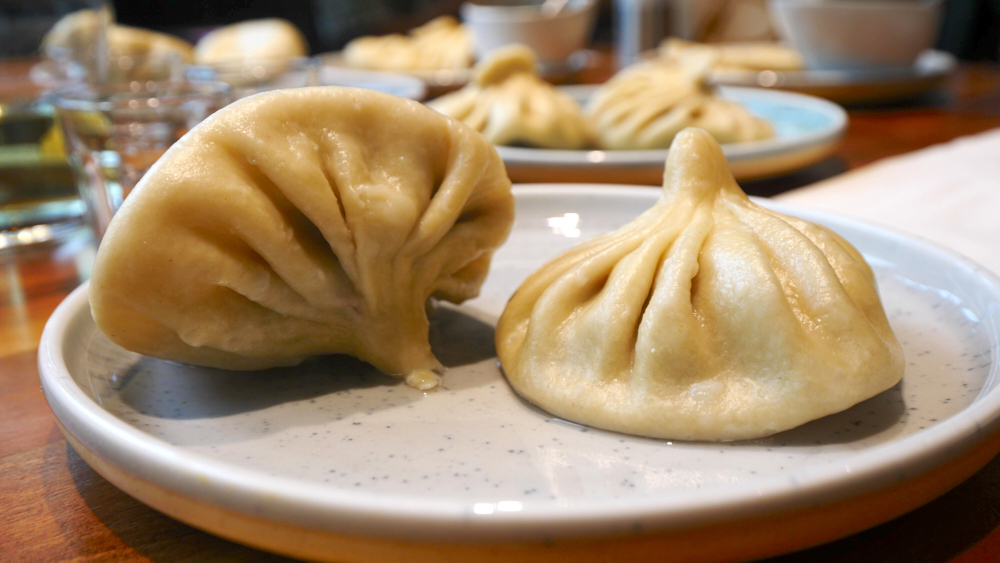 Then, we had some Black Lion American Pale Ale it was crafty, light, and crisp with a light head. It was a good beer and easy to drink! Then, I tried on an awesome coat and then Tim and I continued on to Restaurant Qorbuda, a rustic alpine house with a terrace. We tried some of their light and smooth melon chacha before checking out the terrace. The area reminded me of the Albanian Alps! 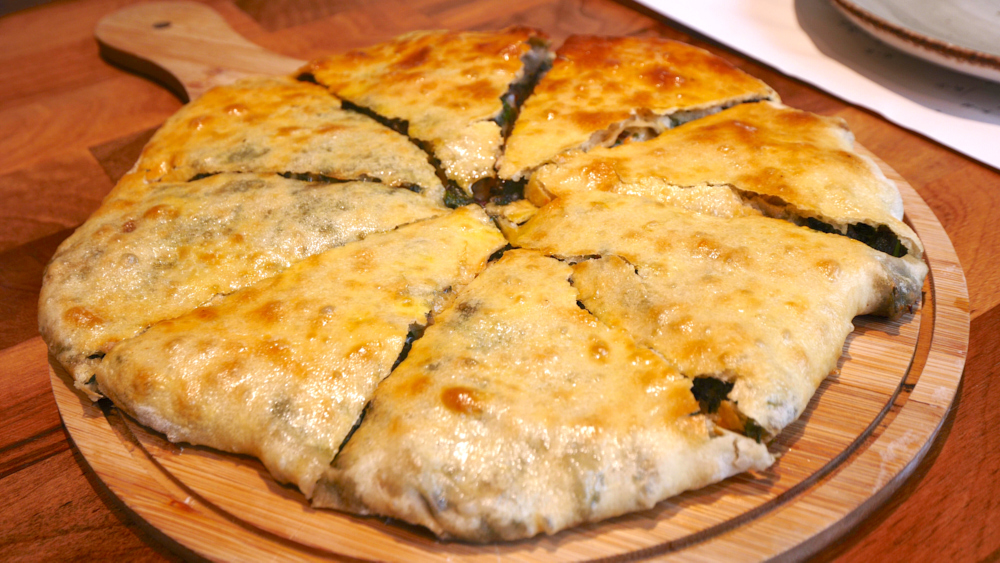 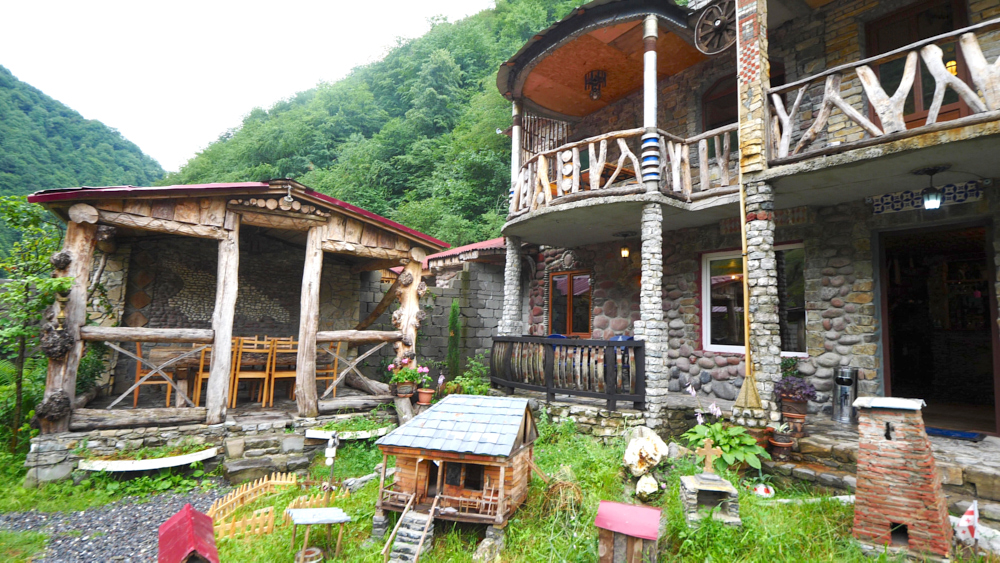 We arrived at Alpenhaus Hotel, where I met Kaki. It’s a 3-story, 12-room hotel with a restaurant and three styles of rooms. They have a double, a triple, a queens, and modest accommodations with shared bathrooms. It’s rustic and very alpine!

My room had a queen-sized bed and offered a beautiful mountain view. Unfortunately, it was cloudy, so I couldn’t see Mount Kazbeg even though it was right in front of us! 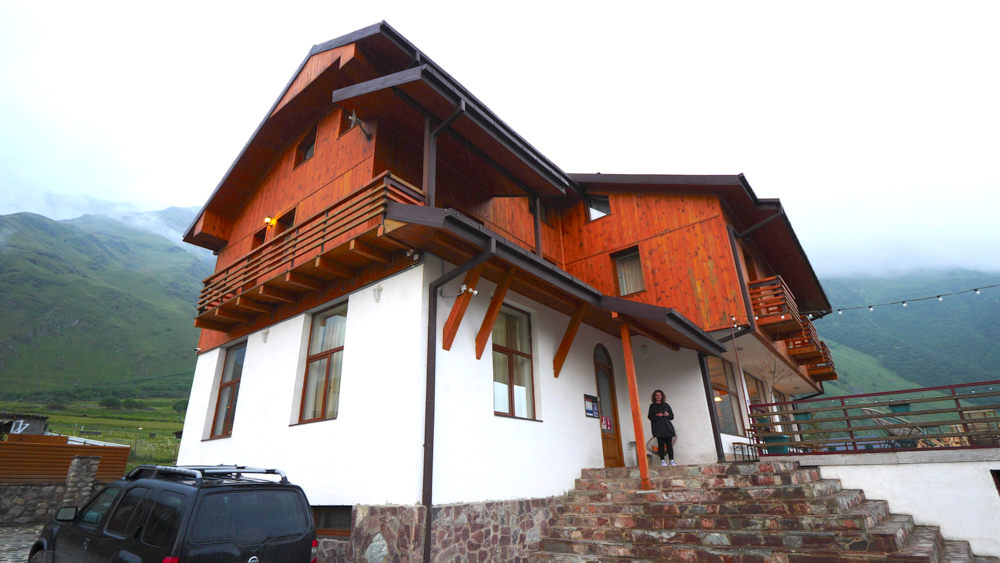 At the bar, we enjoyed a strong chacha flight and cherry juice. Then, we had a tomato & cucumber salad with walnuts, puri bread, lobio (bean stew), mchadi (fried corn patty), a chicken quiche, a chicken wrap, chicken with fried vegetables, and more! 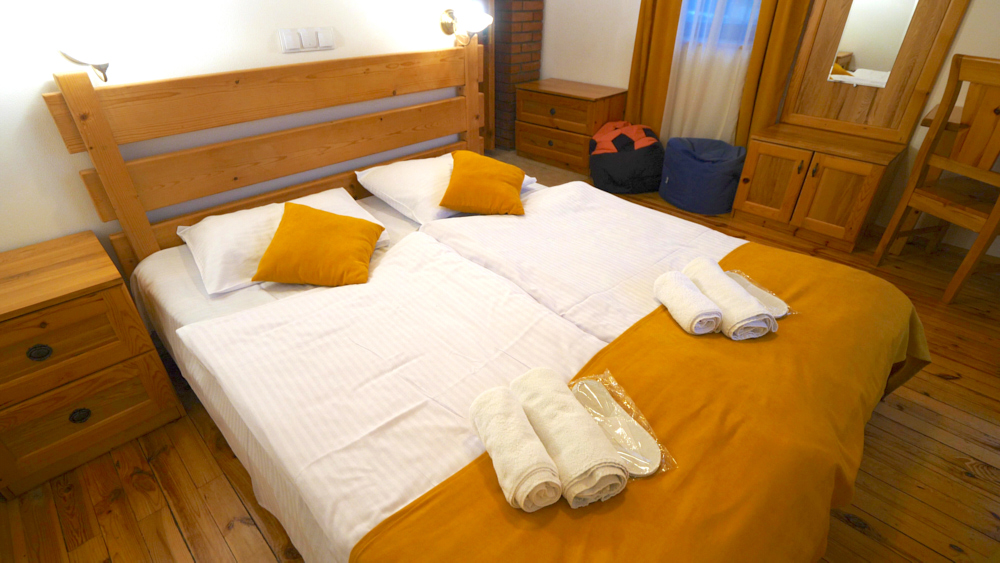 The lobio was creamy and spicy, and contained some walnuts. The house special was a creamy tava dish in a clay pot. Everything was so fresh and tasty. The salad with the tomatoes, coriander, and walnuts was excellent. Everything contained walnuts! Finally, we ended with some strong chacha! 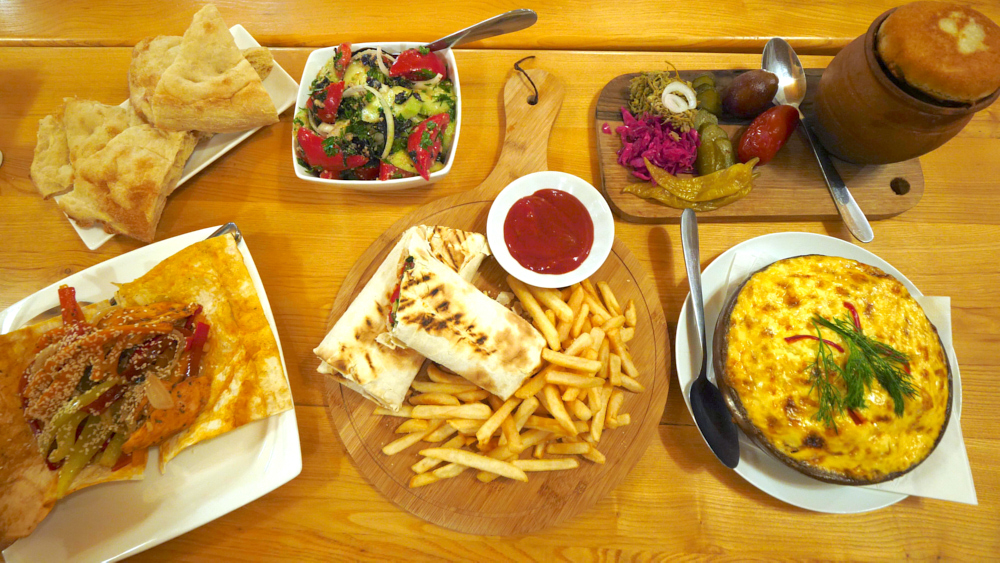 I hope you liked coming with me to try khinkali in the birthplace of khinkali in Kasbegi, Georgia! If you did, please give this video a thumbs up and leave me a comment below. Also, please subscribe to my YouTube channel and click the notification bell so you don’t miss any of my upcoming travel/food adventures!