As my epic road trip through Georgia continued into the central part of the country, I decided to visit a bunch of wineries in a country that’s known for its long history of wine-making! Join me as I go on a classic Georgian food and winery tour in Ateni, Georgia!

My boy Tim from Friendly GE and I would be heading to Ateni, which is a medieval city in the Tana River valley just south of Gori. The city dates back to the 11th century and was guarded by three fortresses: Ateni Fortress, Vere Fortress, and Deksikhe. 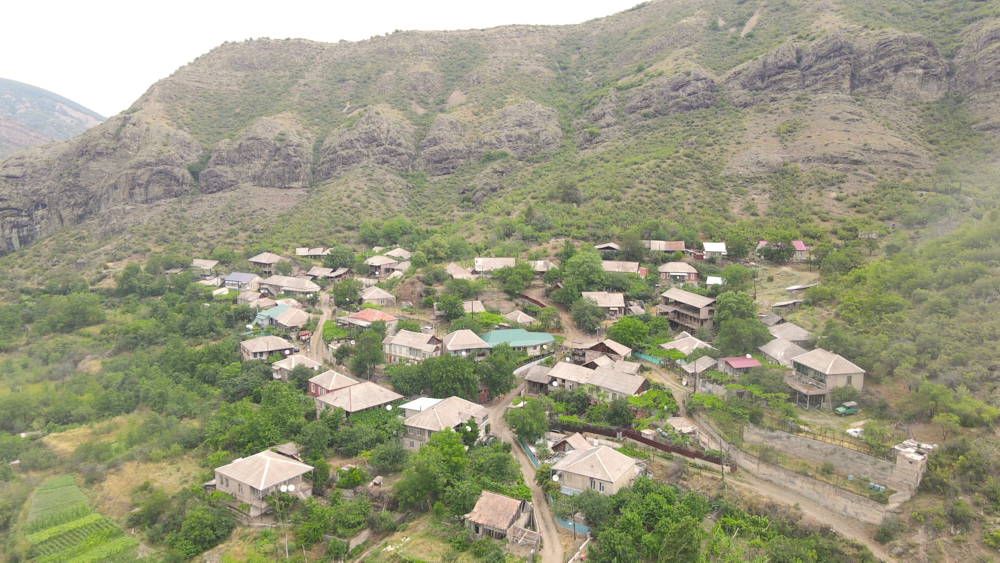 We began our afternoon at Wine Artisans, a winery that’s actually a local’s home. It’s run by Andro, who invited us in. We got to see bottles of his distilled wine, which contains herbs and fruit. He experiments with lots of ingredients. It smelled good but strong! 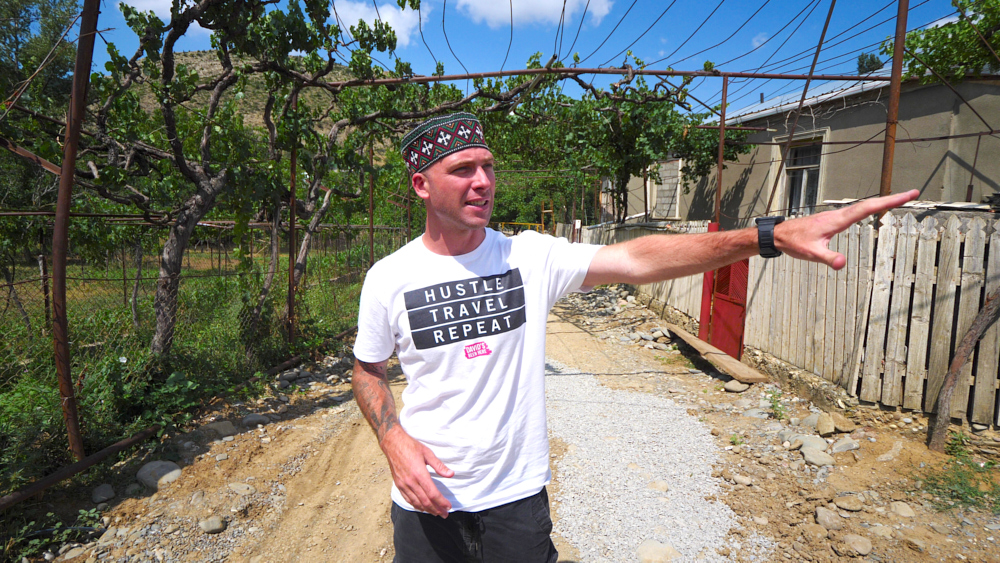 He showed us his distillation oven, his vines, and an open-air kitchen. They have an oven table that keeps the food and the people around it warm! Then, we got to see the room containing his qvevri, or gigantic clay pots in which the wine ferments for 12 months. The qvevri are placed in holes underground. This is the traditional Georgian winemaking method and is unique to the country. 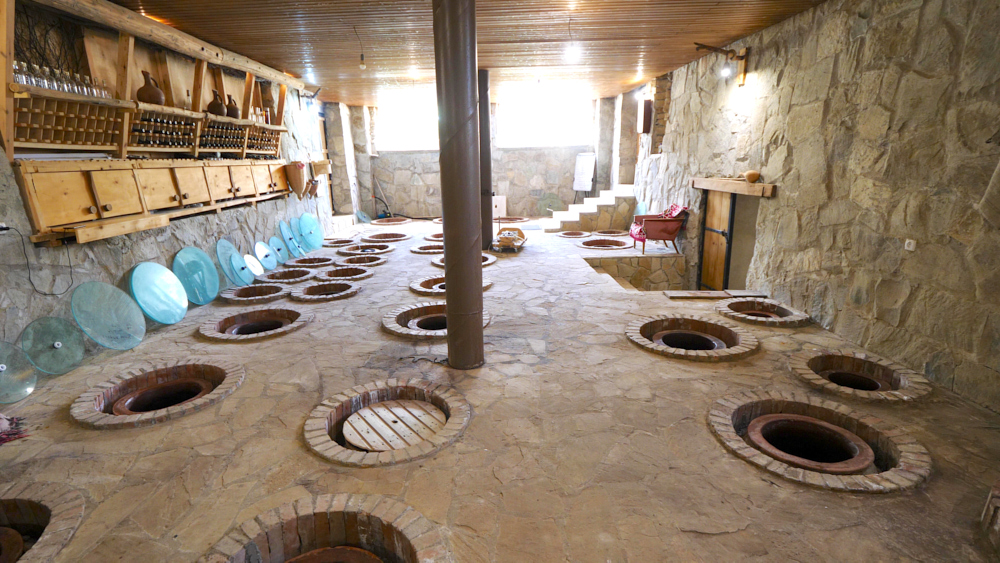 Next, we headed down to try a light and young dry white wine straight from his tanks. We followed that with a 3-grape rosé, which is basically a white wine spiced up with two different reds. It was light, young, and tasty, but very unique and didn’t feel fermented!

Their 2-grape white was great as well! The soil contains limestone, flint, and others that affect the flavor and quality. Next was the Impossible Wine, which is made from two grapes that many people say you shouldn’t mix, but I liked it a lot! 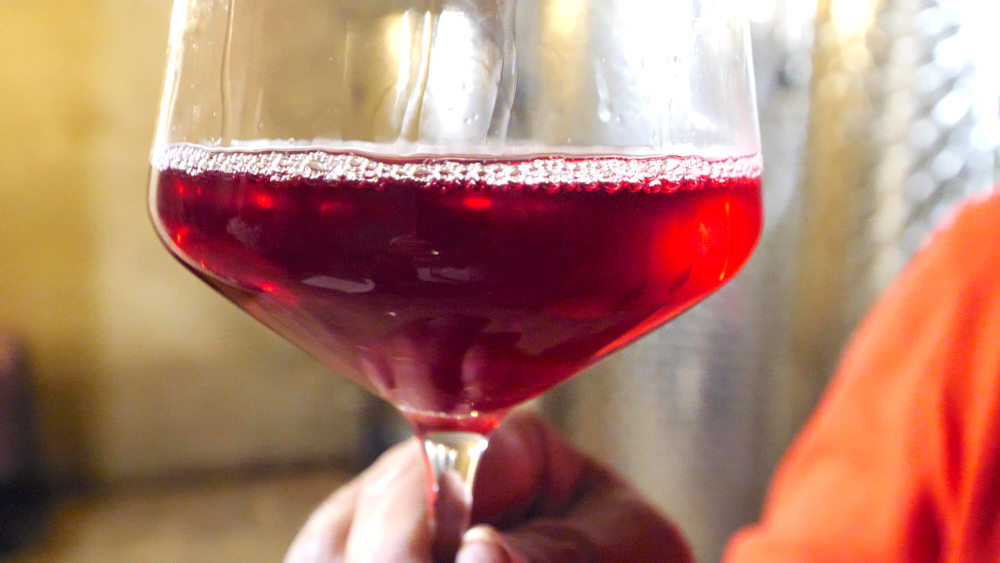 The Naturali Red was amazing, almost like an Italian wine I’d had. I could taste wild cherry and currants. Then, we headed up to his wine storage room, where he stores 48 different styles! 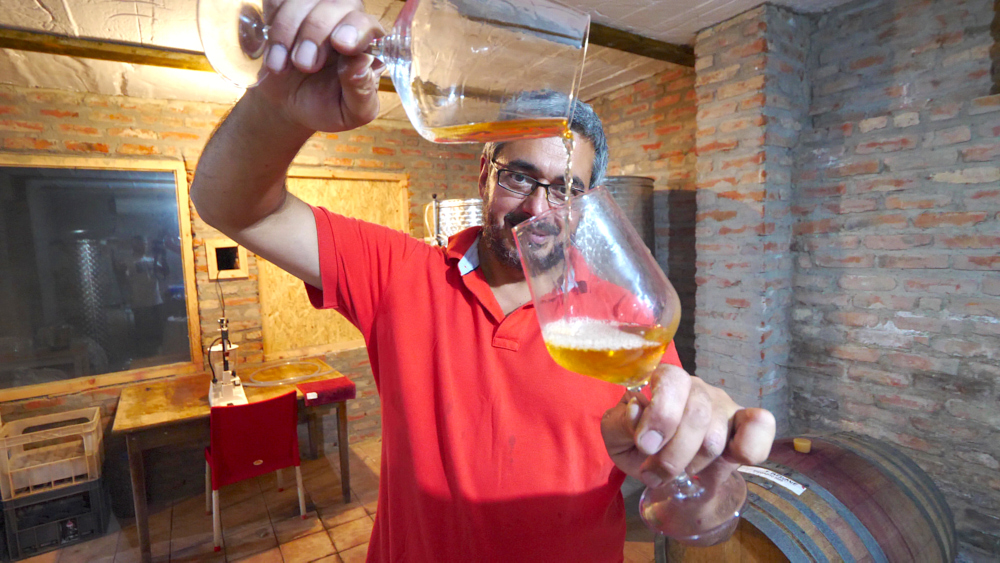 I tried an aged white, which felt a little sweet. Then, I got to see where he bottles, labels, and corks his wine. Next was the agave dry white, which was sweet and contains honey and orange peel. 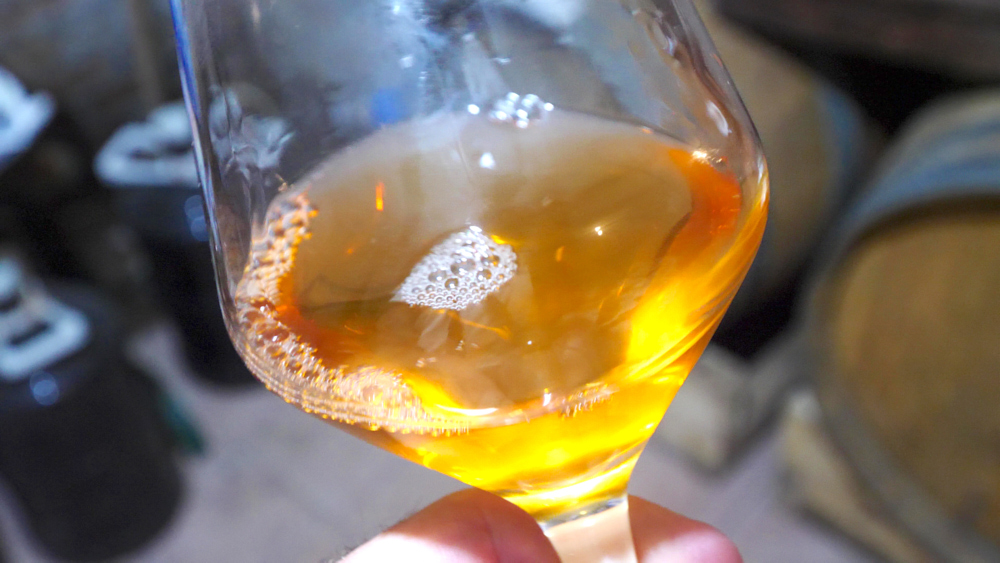 The Dionysus red reserve was my favorite! Then, it was time to eat! We had chakapuli, nigvziani badrijani (eggplant stuffed with nigvzis sakmazi, or walnut paste), potatoes, bread, and khachapuri. It was exactly what I expected from a Georgian food and winery tour of Ateni, Georgia! 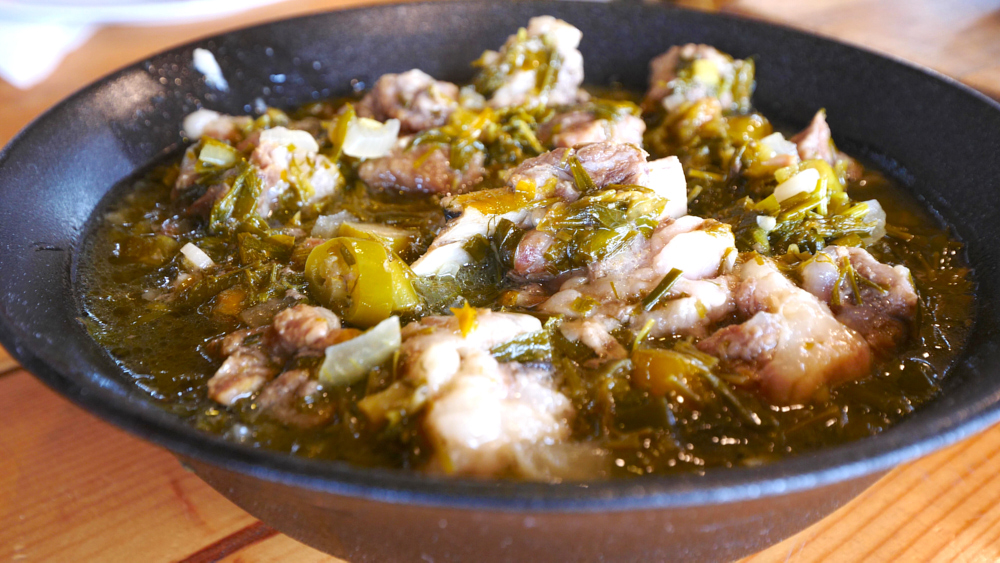 The chakapuli contains greens, beef, and chilies. The stuffed eggplant also had pomegranate on top and was very spicy! The chakapuli was earthy and fatty and made from grass-fed beef. It was so tasty and the hospitality was out of this world! 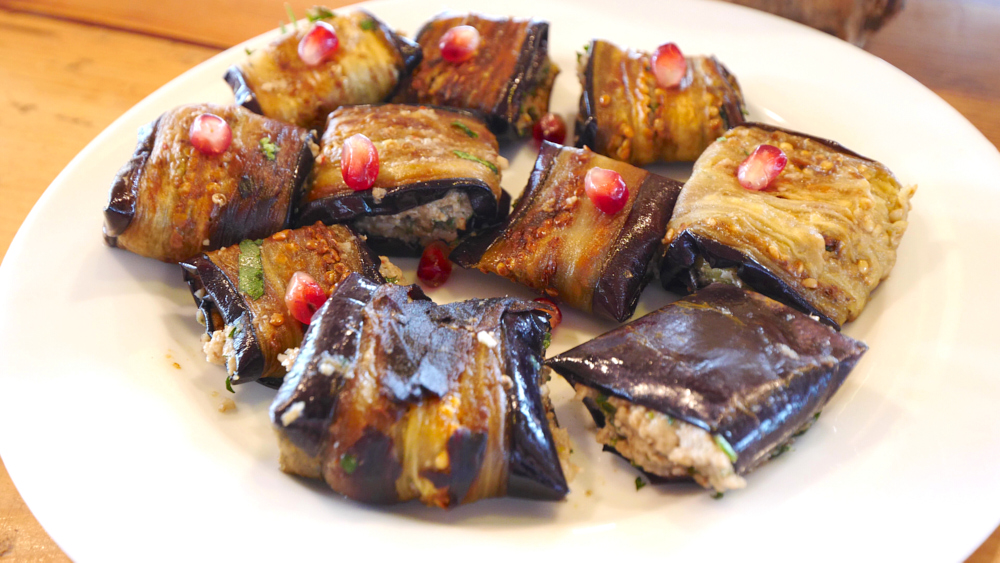 I also loved the roasted potatoes with dill, the bean salad, and the jonjoli. The khachapuri contained lots of fresh cheese and was fantastic! We also enjoyed more wines! You can buy a bottle for 18 Euros, or $21 USD. He gifted us each a bottle containing beeswax and apricot! 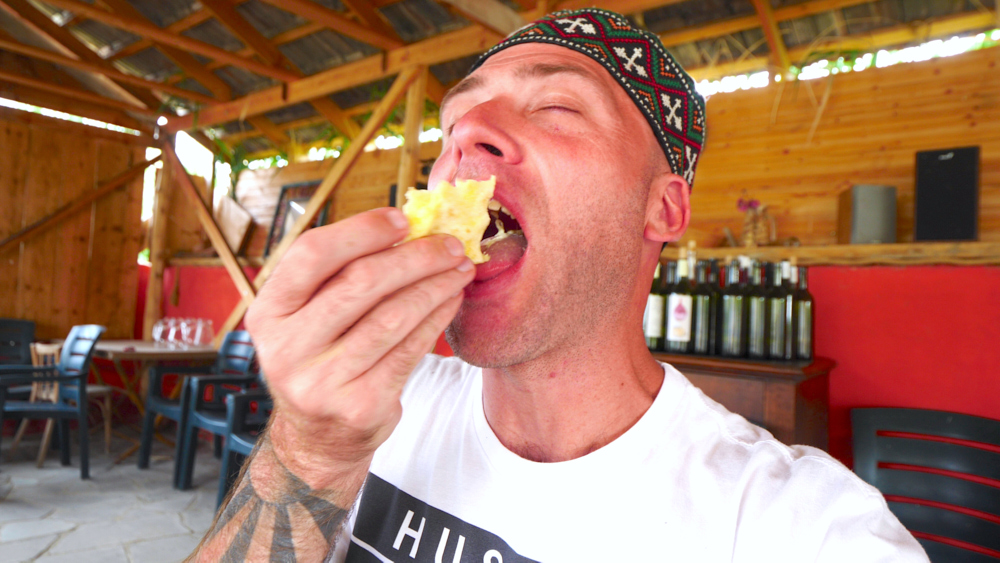 Next, we drove 10-15 minutes to a guesthouse in Ateni. There were lots of vines everywhere in town. On the way, we stopped at Ateni Monastery, one of the oldest and holiest churches in Georgia. It dates back to the 7th-8th century!

It’s a Georgian Orthodox church and has views of the valley and village. It’s made up of huge bricks and has some carvings on the exterior. Inside are gorgeous frescoes on the walls and ceilings. 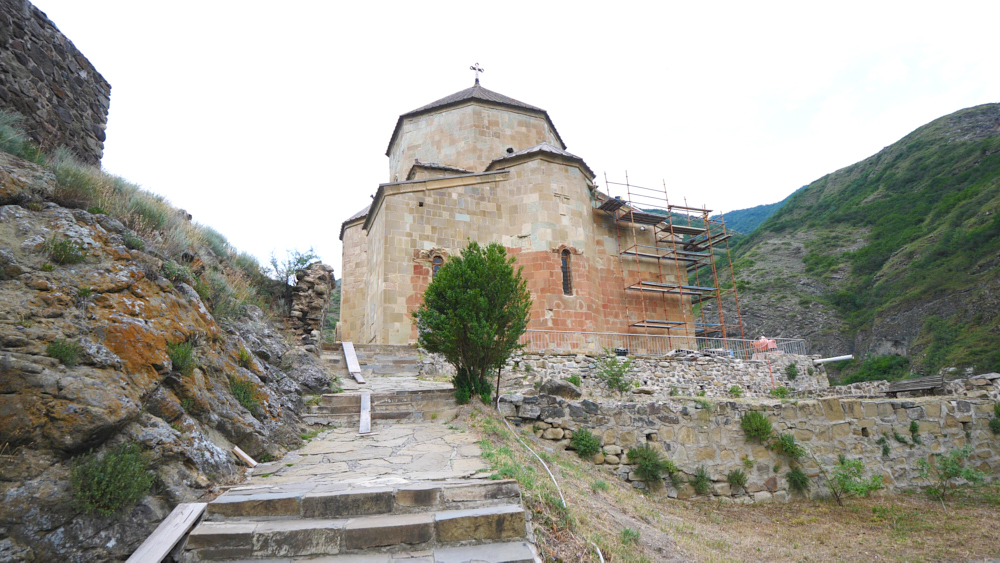 Some are from the 7th century while others are from the 11th. It was my favorite church of the trip so far! It was like a trip back in time! From there, we continued on to Nika Vacheishvili’s Guesthouse and Wine Cellar. 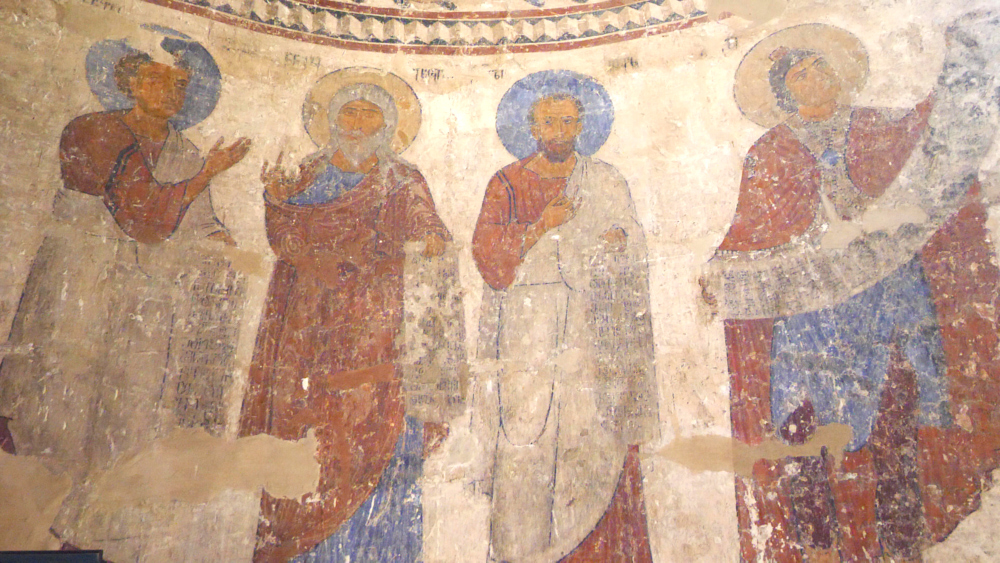 We drove straight across a river to get to the guesthouse. There, we met Diana, and checked out room number 2 on the bottom floor. They have 13 rooms in total. The room was rustic and had two twin beds, a desk, and a modern, colorful bathroom. 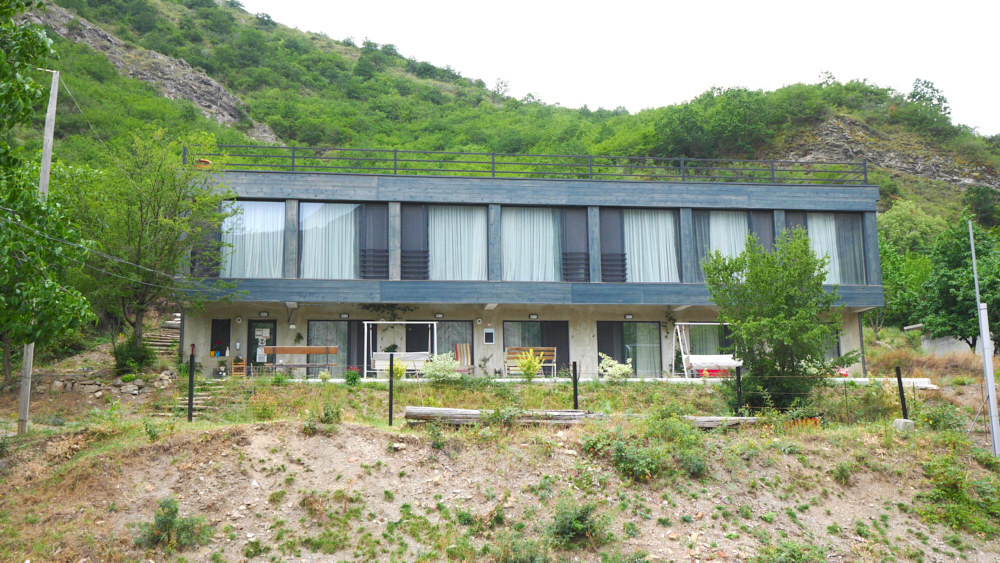 They have a nice terrace where you can relax and slightly larger rooms on the top floor. On the grounds is a covered terrace and gardens where you can eat. They have lots of chacha and wines there! It was a great spot to relax during our Georgian food and winery tour in Ateni, Georgia. 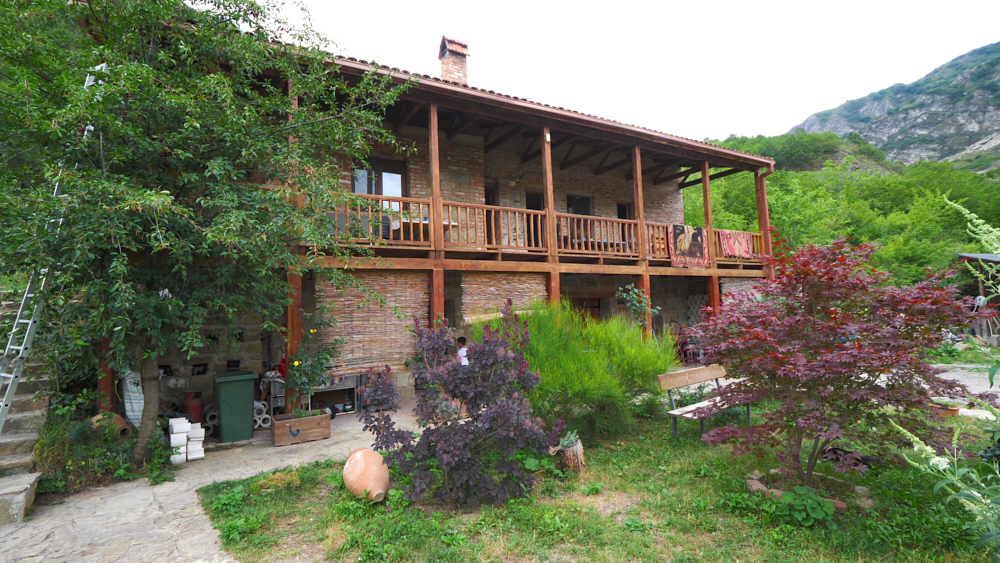 We started with some 60% chacha that was like rocket fuel. Then, I checked out the vineyard and then it was time for dinner! We had green salad, beets cooked in plum sauce, eggplant, carrot salad, local cheese, mixed fried vegetables, and chakrakina (bread stuffed with beet leaves, herbs, and cheese).

Their 2017 Atenuri white wine is a blend of two types of grapes and was really tasty. The chakrakina’s dough was really soft, and I loved the herbs and beetroot leaves and cheese. 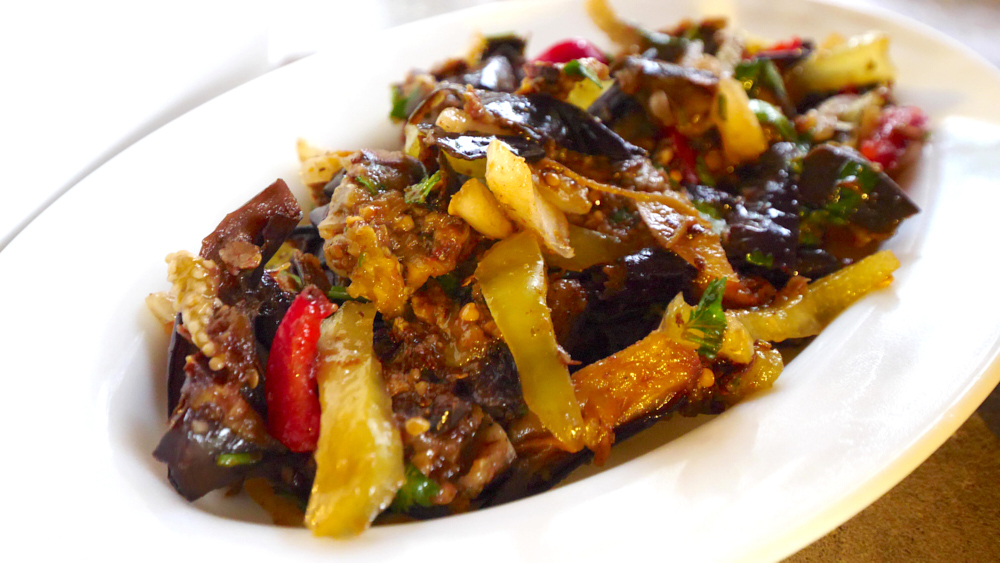 The beets in plum sauce were crunchy and sour, and I loved the creaminess of the carrot salad. The eggplant was creamy and had a bit of crunch from the onions. They gave me more wine as well. You’ll drink till you drop in Georgia! It’s the way they treat their guests! 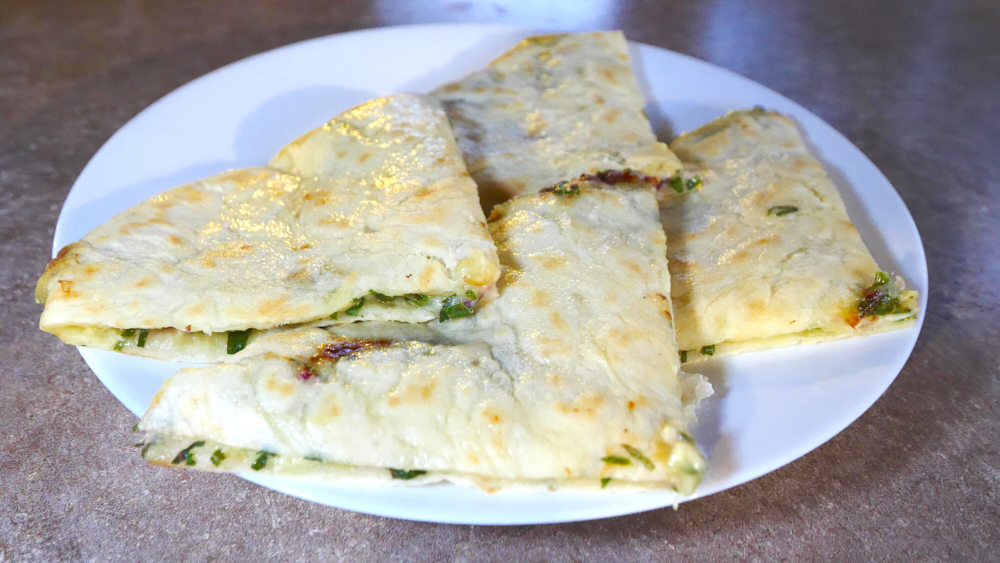 After Tim played some backgammon, I finished my night with some red wine! What a way to end our Georgian food and winery tour in Ateni, Georgia! 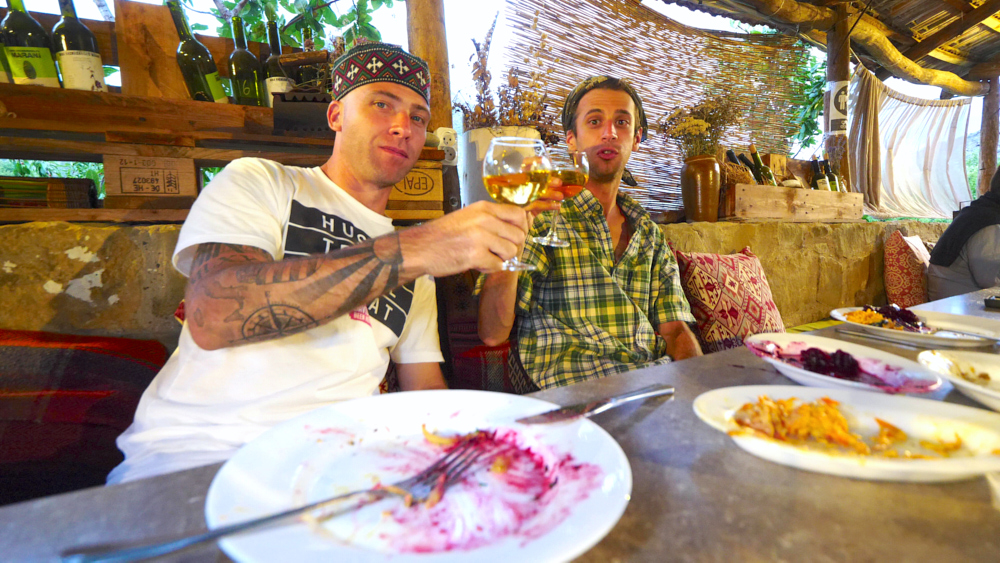 I hope you liked coming with me on my Georgian food and winery tour in Ateni, Georgia! If you did, please give this video a thumbs up and leave me a comment below. Also, please subscribe to my YouTube channel and click the notification bell so you don’t miss any of my upcoming travel/food adventures!