My travels in the central part of the Republic of Georgia continued in the city of Gori. Join me as I explore a Georgian street food market and an ancient cave city in Gori, Georgia!

Gori dates back to the Hellenistic period and is located just an hour west of Tbilisi. It’s now the capital of the Shida Kartli region. It’s known for its famous fortress and has been a strategically important military location for centuries. Gori is also the birthplace of the infamous Soviet leader Joseph Stalin. 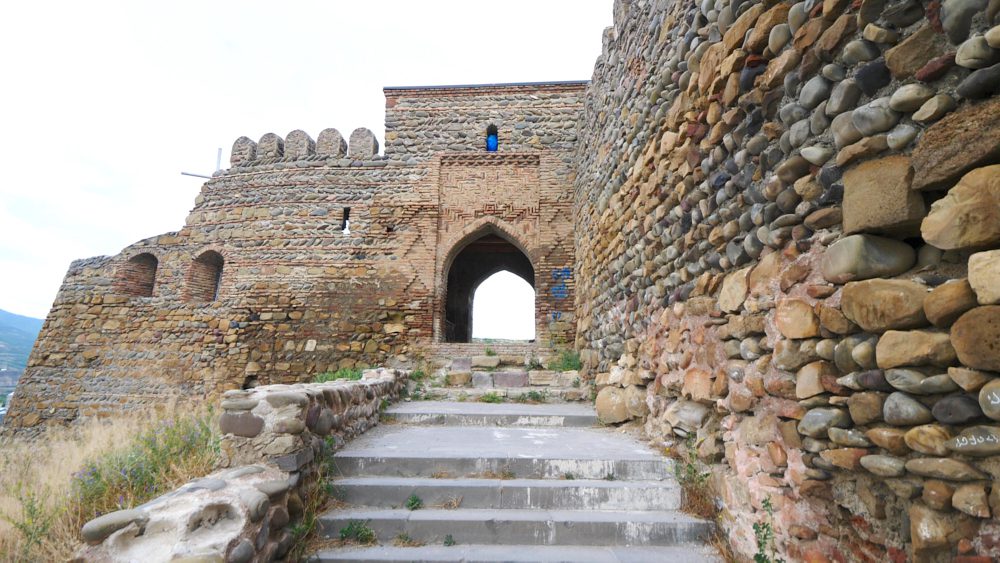 My boy Tim from Friendly GE and I began our morning at Gori Fortress, a medieval citadel that dates back to ancient times. However, the current version of the fortress was reconstructed in the 18th century. It’s situated on a rocky hill high in the middle of the city. 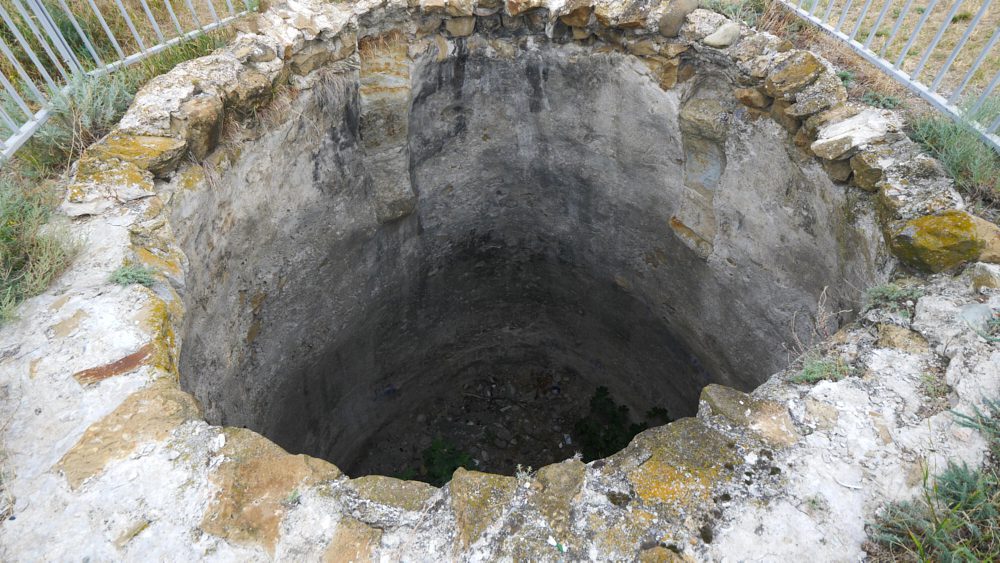 At the top of the fortress was a huge cistern that collected water. You can also get epic, 360-degree views of the entire city. The walls are beautiful and extend all the way down to the ground. Then, we drove through the old center of Gori, where there are lots of old homes and churches. I couldn’t wait to check out the bazaar. But first, we stopped at the Joseph Stalin Museum, which is all about the brutal dictator of the USSR.

The museum contains his old home, his private train car that he traveled around the USSR in. His home is an ordinary village home, which they took apart and rebuilt here. It has a terrace and a cellar. He lived there from his birth in 1879 to 1883.

Gori Bazaar is a big flea market and produce market. It recently burned down, so there aren’t many vendors there. We saw some hats, clothes, and toys in the initial area. They moved the bulk of the market on the street after the fire. 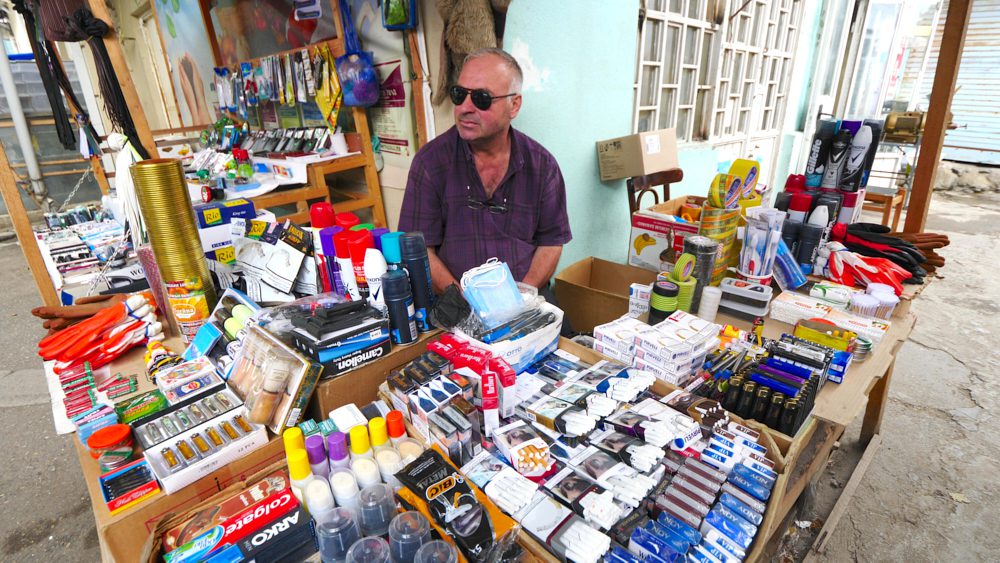 The new bazaar is by the bus station, about 20 minutes away. We found a bakery that sells lobiani and a sweet bread called kada. They gave us some kada for free! It was very sweet, fluffy, and tasty and may have contained almond paste. I loved it! 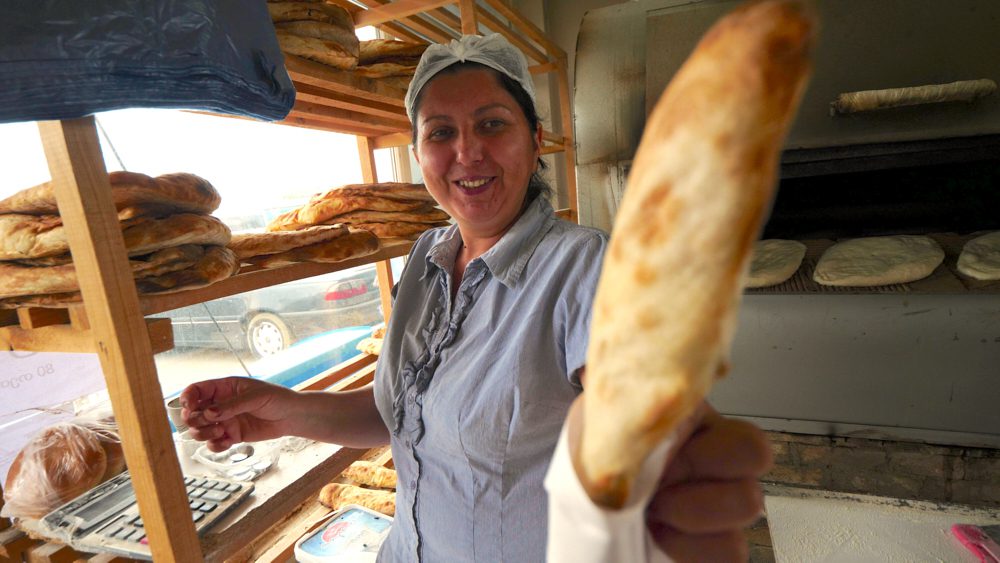 I also got to see them make dough and bake bread. Then, I tried some lobiani, which contained bean filling. I loved the char on the outside and the spice! It had a nice kick to it! They also gave us some tonis puri, which was fresh, crunchy, and hot out of the oven. The amount of fresh bread you’ll eat in Georgia is amazing! Best of all, the people were so nice and gave us free bread to take with us! 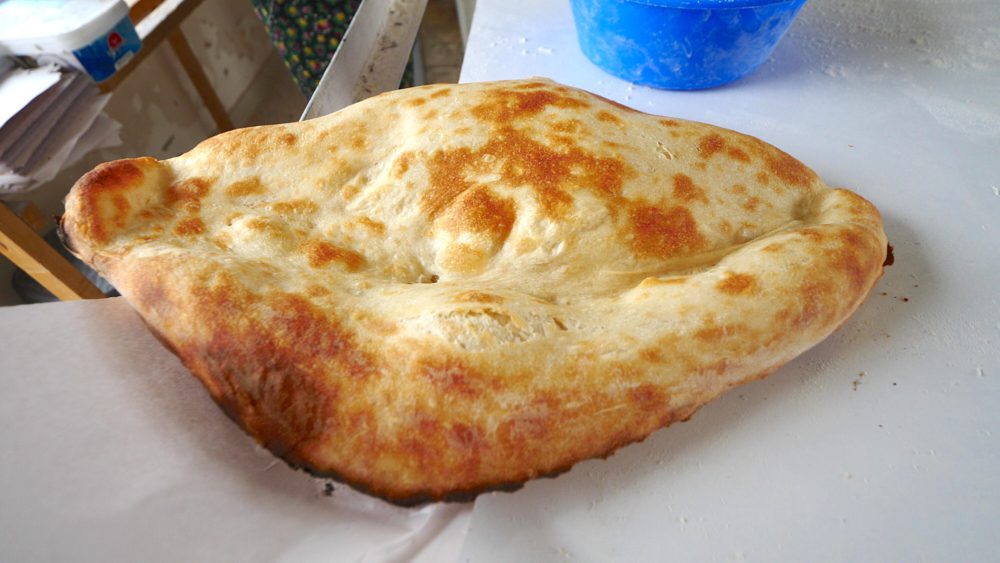 Then, we found the new bazaar, which was covered. I could see vendors selling tools, fruit, and vegetables. It was a chilly Saturday morning, so there weren’t a lot of people there. We met a woman shelling walnuts who let us try them. Walnuts can be found throughout Georgian cuisine! They were a great Georgian street food in Gori, Georgia. She gave me some wine and also sold dried chilies. The wine was young, almost like juice!

Next, we tried some sala, or pork belly, that was covered in spices. It was really spicy and contained red pepper. It was amazing! We also met a man who repairs sewing machines and then the woman came back and gave me a free bottle of wine! 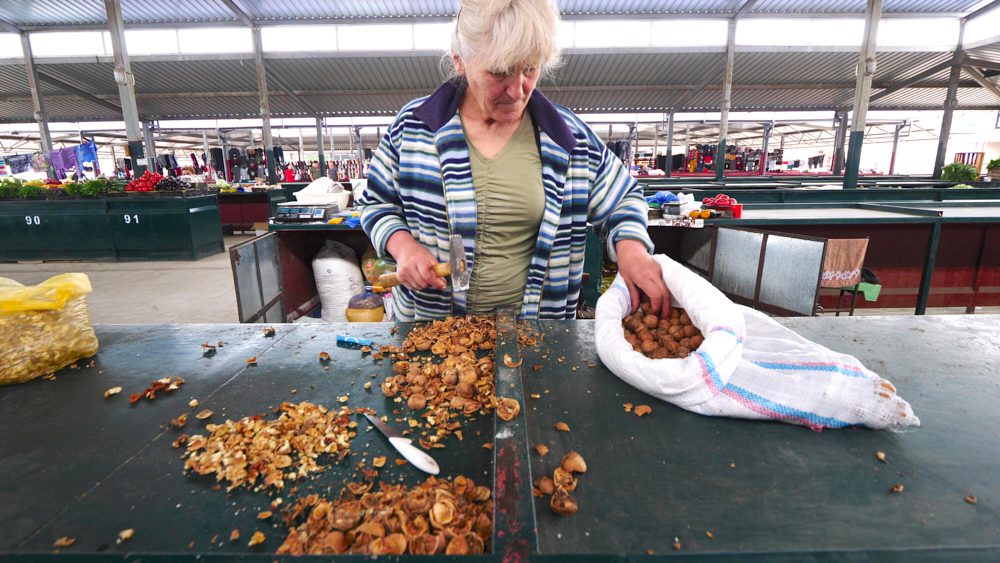 Then, Tim and I headed to Uplistsikhe Cave Town, which was the largest city in Georgia in ancient times. It’s located outside of Gori and is the most-visited site in the area. It costs GEL 15/$5 USD to get in. 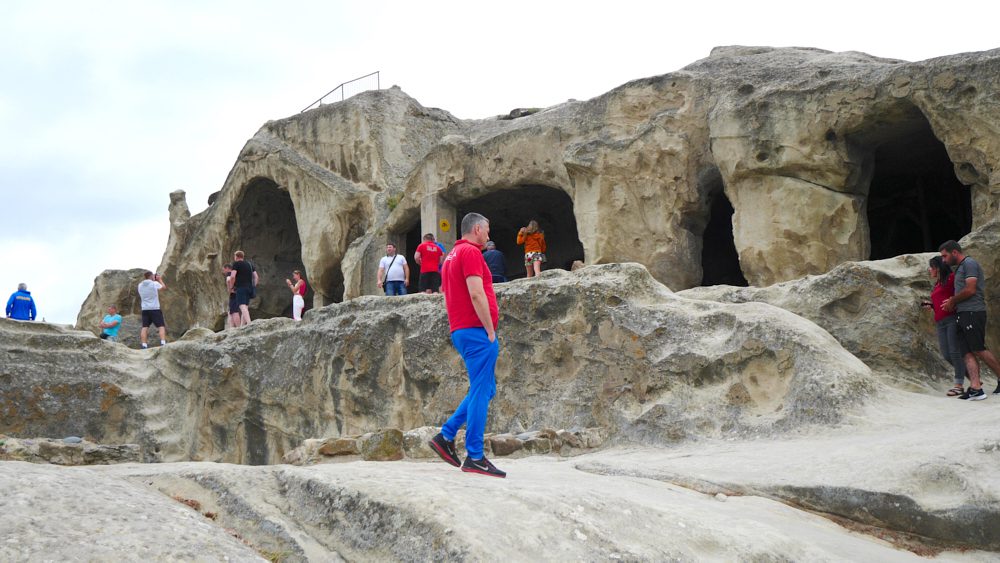 The cave city was destroyed by invaders and an earthquake, so much of it is in ruin. On the map at the entrance, you can see the main road, fortifications, main tower, and more. You take a long staircase up the rocks to the top, where we had incredible views of the area! 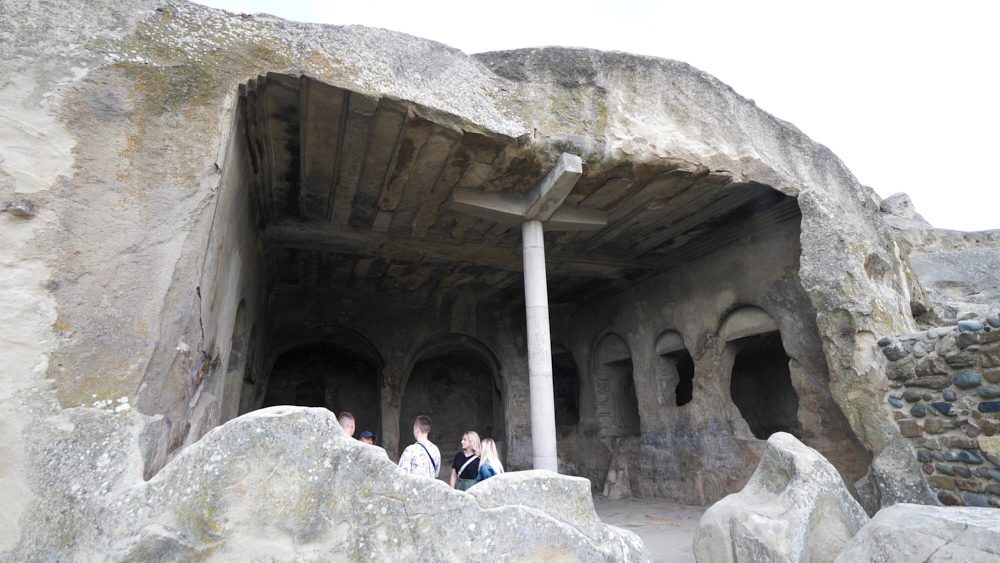 Then, we went inside the cave dwellings, which looked out over the area. Because of the damage it sustained from the earthquake, parts of it are unstable and are held up by new pillars. Uplistsikhe Cave Town was inhabited from before Christ, but its height was in the 12th century. Living in the caves was a great hiding place against invaders. It was somewhat similar to Cappadocia and cave villages I’ve visited in Armenia!

The site is pockmarked with caves and ruined structures, as well as homes and wells. Tim and I saw Queen Tamar’s Hall, a mostly collapsed structure that belonged to a queen who became king in the 12th-13th century. We also saw her wine cellar and the remains of her qvevries. 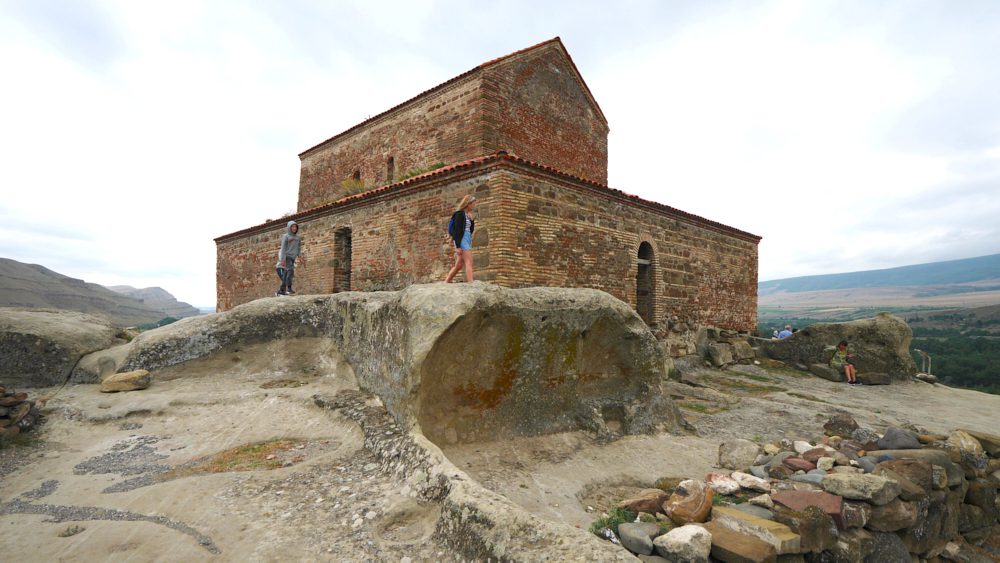 We also saw the remains of the three-nave cathedral and hiked up to the very top to get views of the church and the area. The view is stunning! You can easily explore there for 1-2 hours! 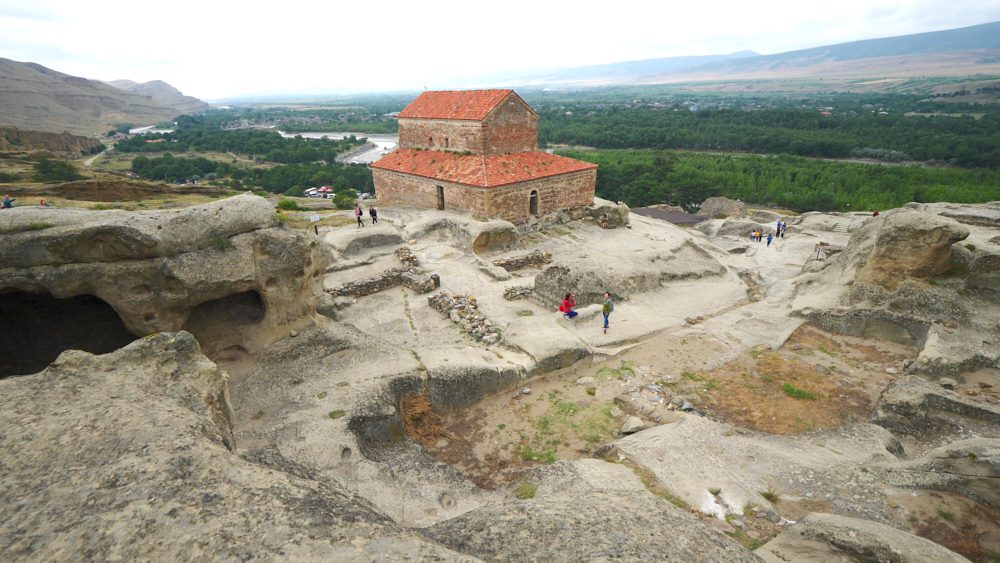 I hope you liked coming with me on my Georgian street food market tour in Gori, Georgia! If you did, please give this video a thumbs up and leave me a comment below. Also, please subscribe to my YouTube channel and click the notification bell so you don’t miss any of my upcoming travel/food adventures!