As my day in the historical city of Kutaisi in the Republic of Georgia continued, I set out to explore its Green Bazaar! Come along with me as I try delicious Georgian street food and meet the locals at the Green Bazaar in Kutaisi, Georgia!

My boy Tim from Friendly GE and I began our morning just outside the Green Bazaar, the oldest and most authentic market in Kutaisi, Georgia. It’s located in the center of the old town and is like a cross between a flea market and a farmer’s market. It’s a covered market full of vendors selling produce, vegetables, wine, home goods, and more! 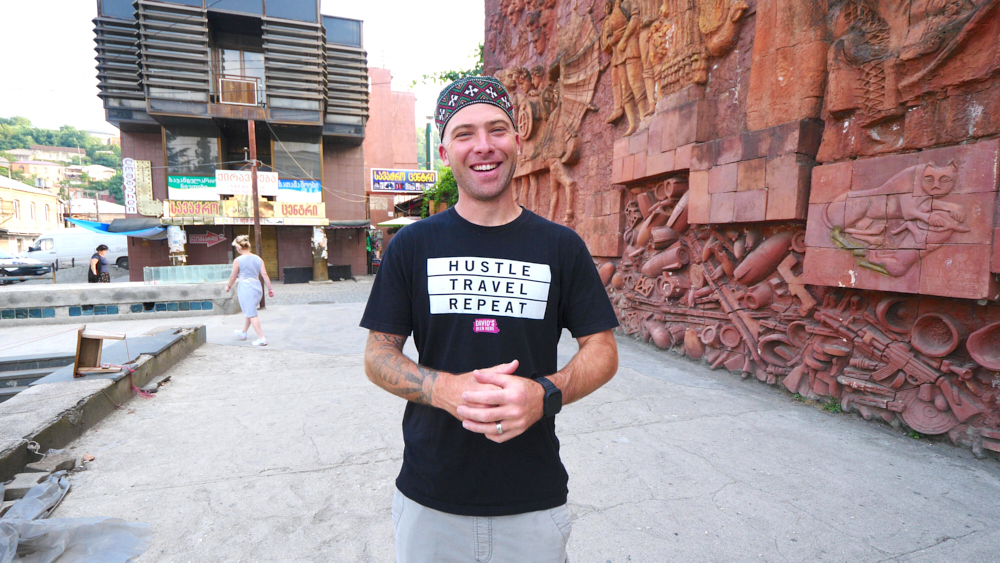 The vendors were starting to put out their produce. I met a friendly fruit vendor and his wife who sold watermelon, plums, and more. Then, inside, I saw just how expansive the market is. It’s divided into tons of sections. 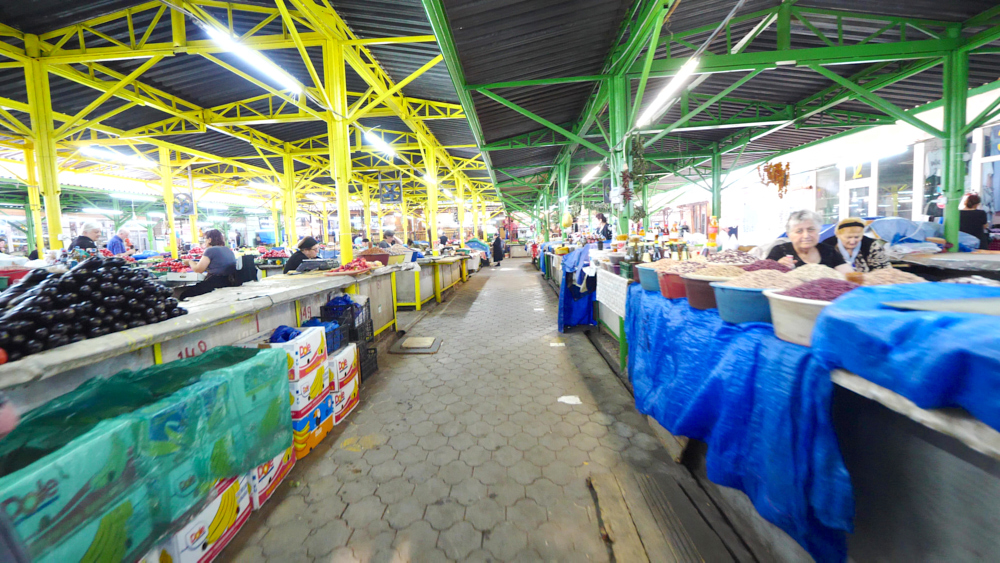 One spice vendor let me try some Svaneti salt, which is herbs mixed with salt. It was super salty! Further on, we saw vendors selling lots of different types of beans, fruit, and vegetables. The woman gave us some Svaneti salt as a gift!

I could also see clothing vendors, cheese vendors, and butchers. I met one selling chilies, spring onions, lettuce, and herbs. There were more selling medicinal herbs, garlic, onions, and wine. It’s all produced locally in the foothills north of Kutaisi! 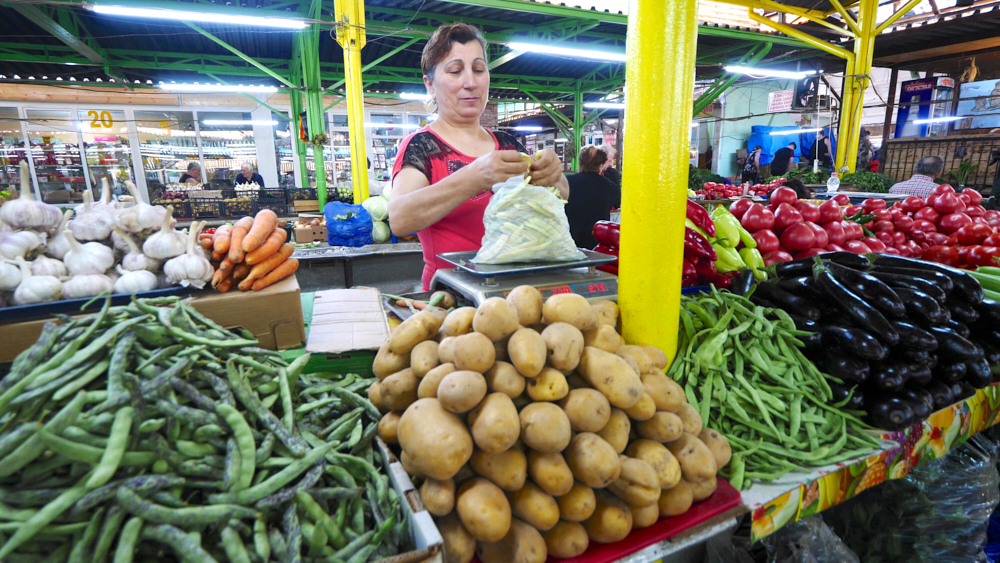 Then, we headed up to the more modern part of the market in a huge hall. I could see cheese, whole chicken, nuts, spices, pickles, and more. This area was redone recently! 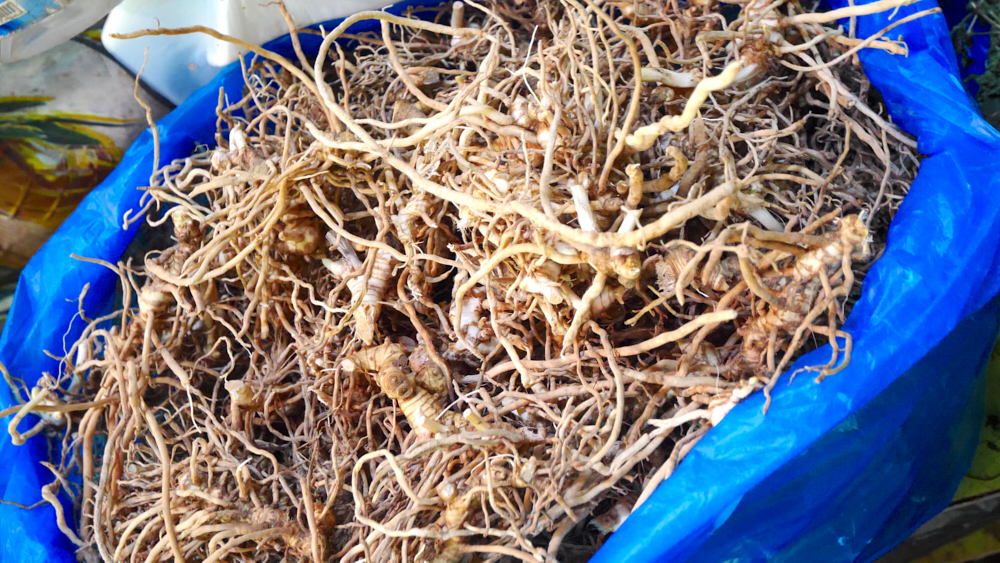 At the cheese vendors, I tried some nadughi, or cottage cheese. It was fresh and crumbly! I also had some Imeruli cheese, which was dense with some nice air pockets. You can buy some big blocks of cheese for about $20 USD! 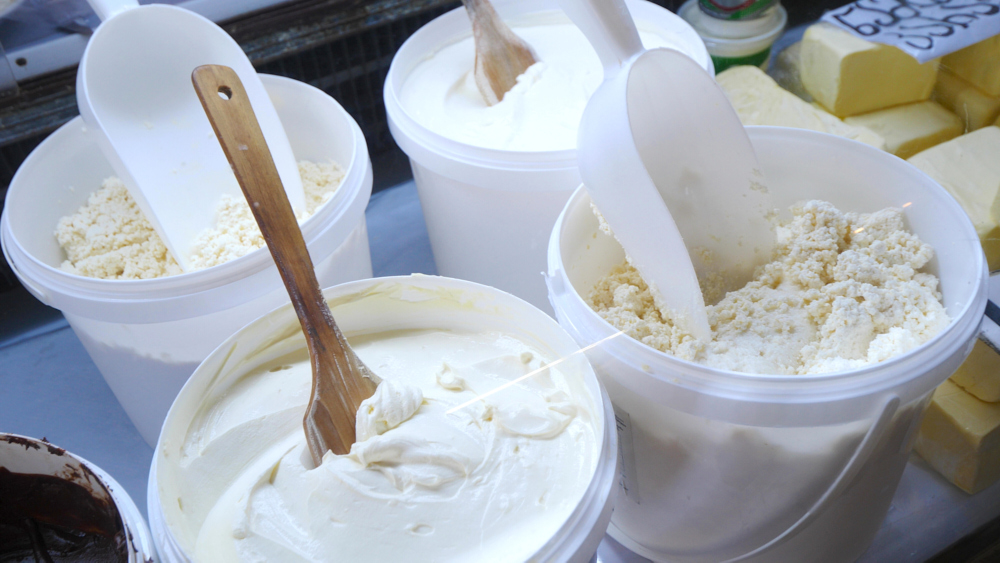 Next were more spices, including svaneti salt, which was less salty than the other. Then, I tried some spicy salt, followed by some smooth peach chacha and some insanely strong brandy! The woman gave me more salt as a gift! She also makes churchkhela at her home using walnuts, hazelnuts, and fruit juices! 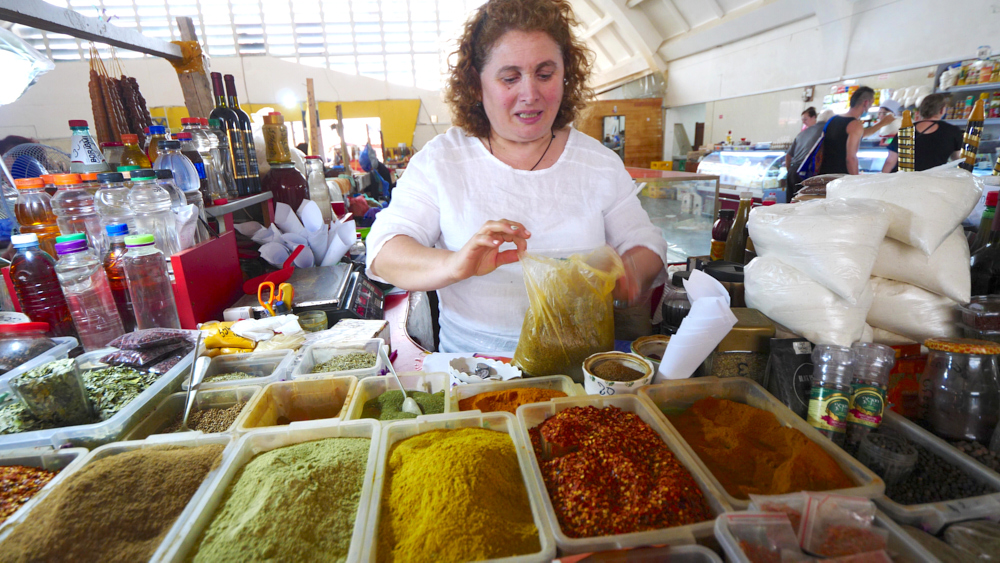 We also saw a vendor selling lots of mushrooms and an entire section of whole, fresh chickens! She torched the chicken over a propane tank to remove the excess feathers! At the butcher’s, we saw a man butchering some fresh meat and another chopping a cow leg. It’s a huge spectacle!

Next, we came across lots of pickled vegetables, including garlic, jonjoli, chilies, cabbages, and tomatoes! The pickled green tomato stuffed with herbs and spices was sour, herbal, and juicy. It was delicious, and the vendor gave it to me for free! 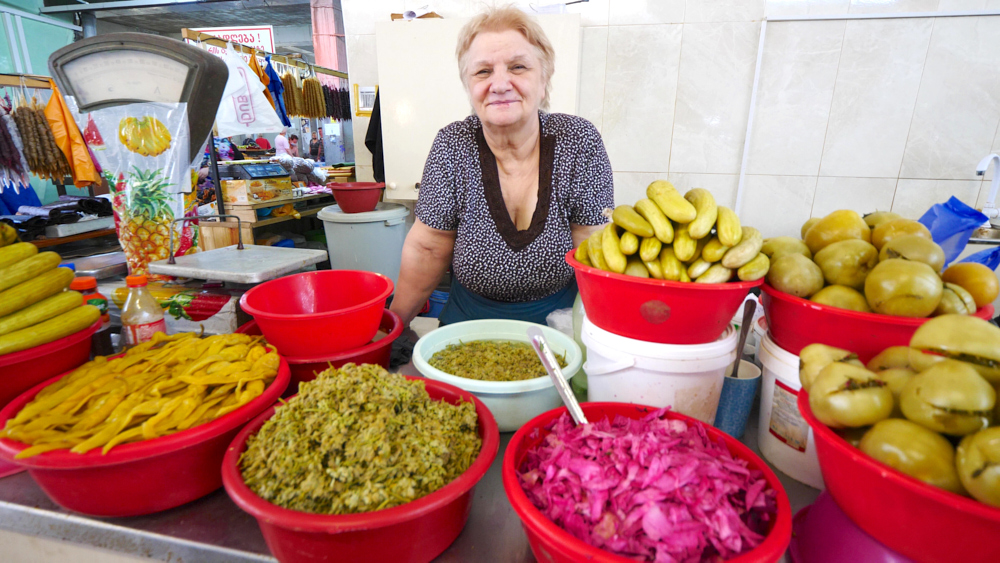 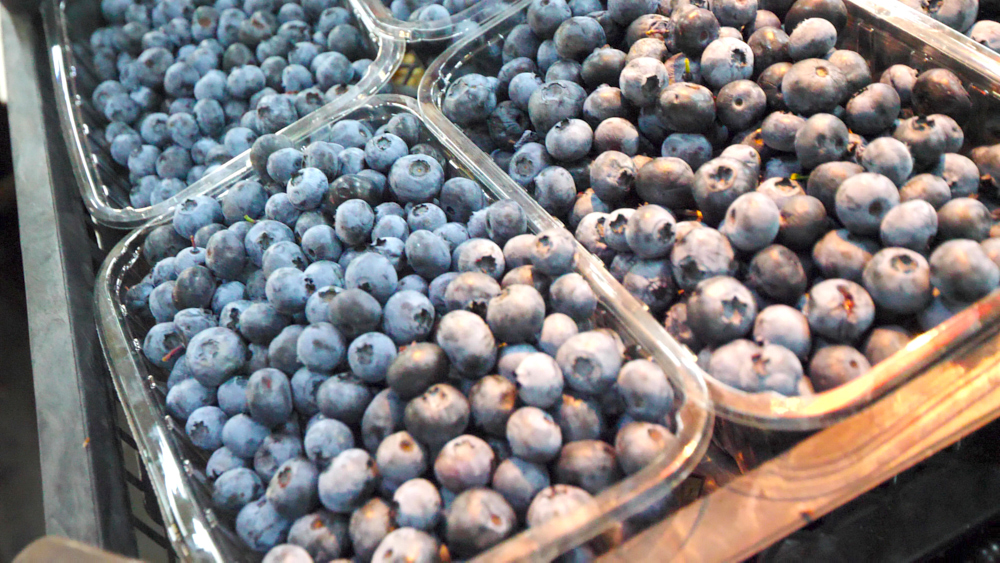 We passed through the clothing section and home goods section. I was looking for some luggage to hold all the gifts I’d been given. Then, I bought a fish-shaped cutting board made of walnut wood for GEL 8, or less than $3 USD. Finally, after seeing more tools, we found Bread & Wine Bistro, which bakes bread, lobiani, and khachapuri in a tone oven.

The Imeruli khachapuri had a smoky flavor and was made with Imeruli cheese. It was so tasty. Then, we jumped on the lobiani, which is bread with bean filling. It was pastier than others I’d had. The lobiani was very warm and fresh! 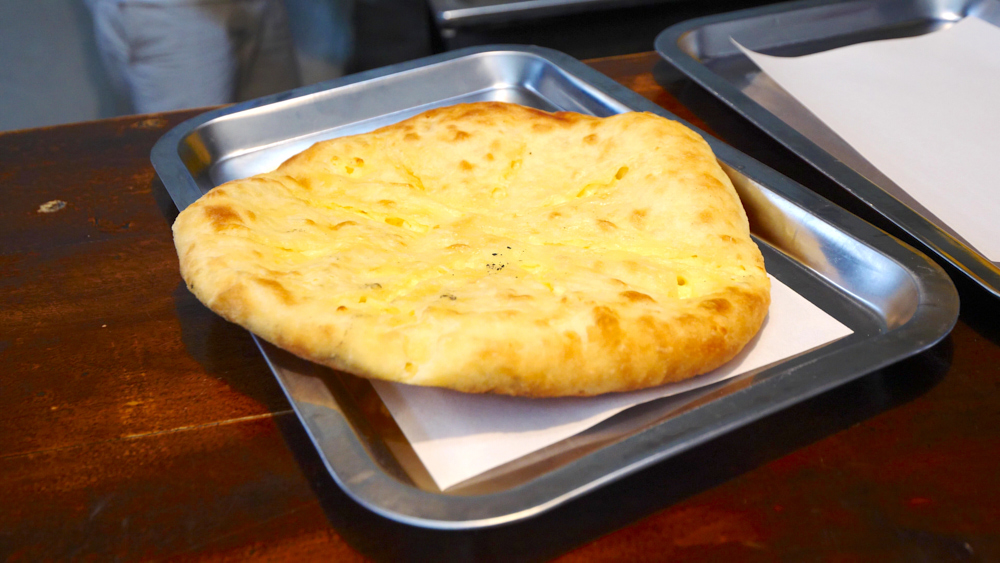 I chased it with some ice-cold water and some semi-sweet red wine at Bread & Wine Bistro for GEL 7.20/$3 USD. It was chilled and perfect after all the bread I ate! 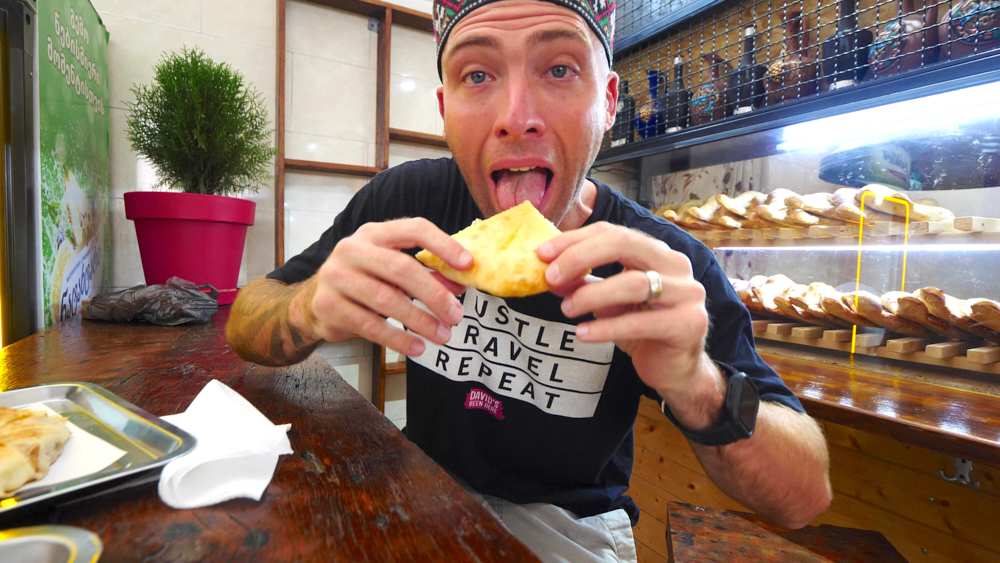 I hope you liked coming with me to try Georgian food at the Green Bazaar in Kutaisi, Georgia! If you did, please give this video a thumbs up and leave me a comment below. Also, please subscribe to my YouTube channel and click the notification bell so you don’t miss any of my upcoming travel/food adventures!