Anyone who has truly explored India knows that its cuisine is among the most diverse on Earth. Indian cuisine is a complex mix of vibrant flavors and unexpected textures, accented with unique ingredients and spices that keep your taste buds guessing. Practically every state or region in the country has its own specialized cuisine, which is informed by everything from accessibility to culture and religion. Many of these treats are sold right on the street! You can find many of the top Indian street foods in the city of Mumbai, India. 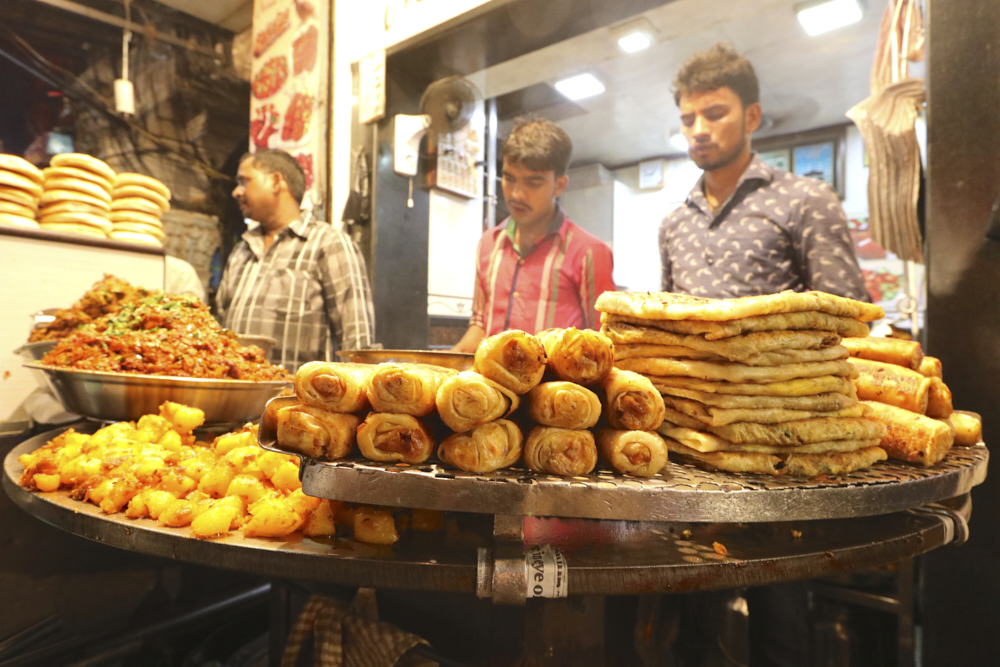 Mumbai lies on the Arabian Sea along India’s western coast, in the state of Maharashtra. The state is known for several Indian favorites, but its largest city is also a hub for dishes around the country. There are easily thousands of street food options throughout this city of 12.4 million. 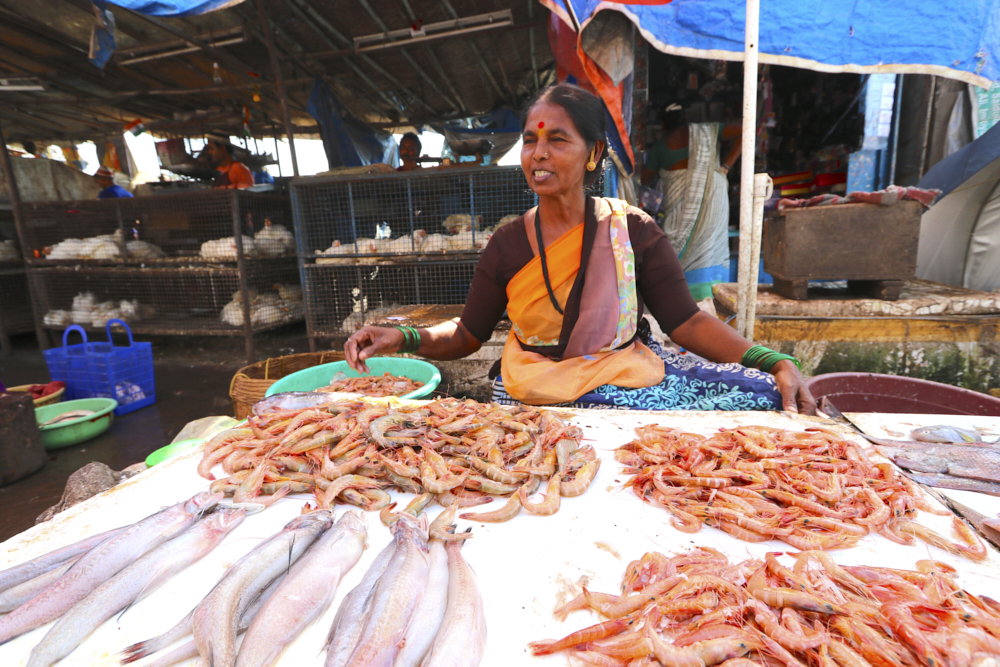 And while I’ve barely scratched the surface when it comes to Mumbai’s food scene, I did spend four incredible days eating my way through the city in early 2018. These are my top 5 Indian street foods in Mumbai, India. 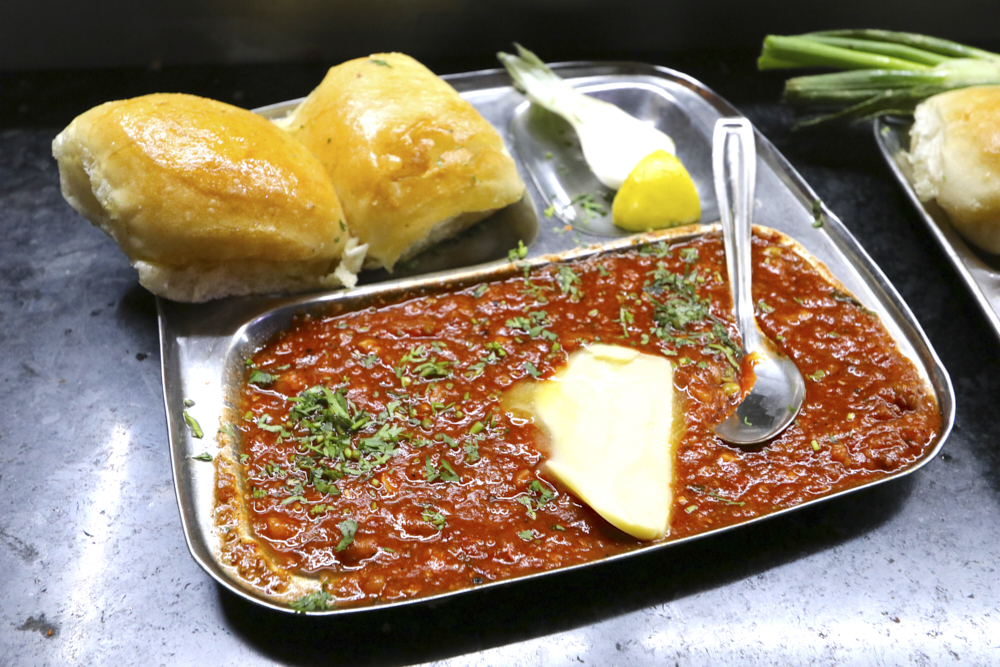 Our first dish is one that is popular throughout India—I’ve had it in both Mumbai and Ahmedabad, and it never disappoints. It’s called pav bhaji. This savory, mouthwatering food is made up of a tomato-and-potato-based vegetable gravy that comes with chopped onions, lemon, and soft bread buns called pav. 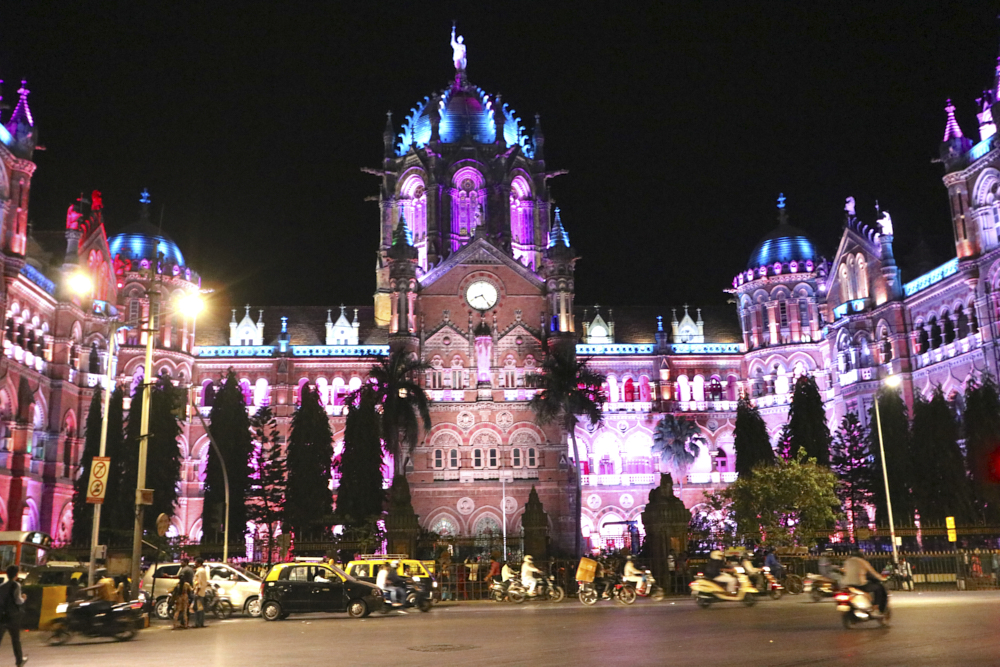 To eat it, you tear off small pieces of the bread and dip it into the curry. Once the bread has been slathered in a healthy coating of gravy, just pop it into your mouth and let your taste buds take you on a roller coaster ride of flavor. 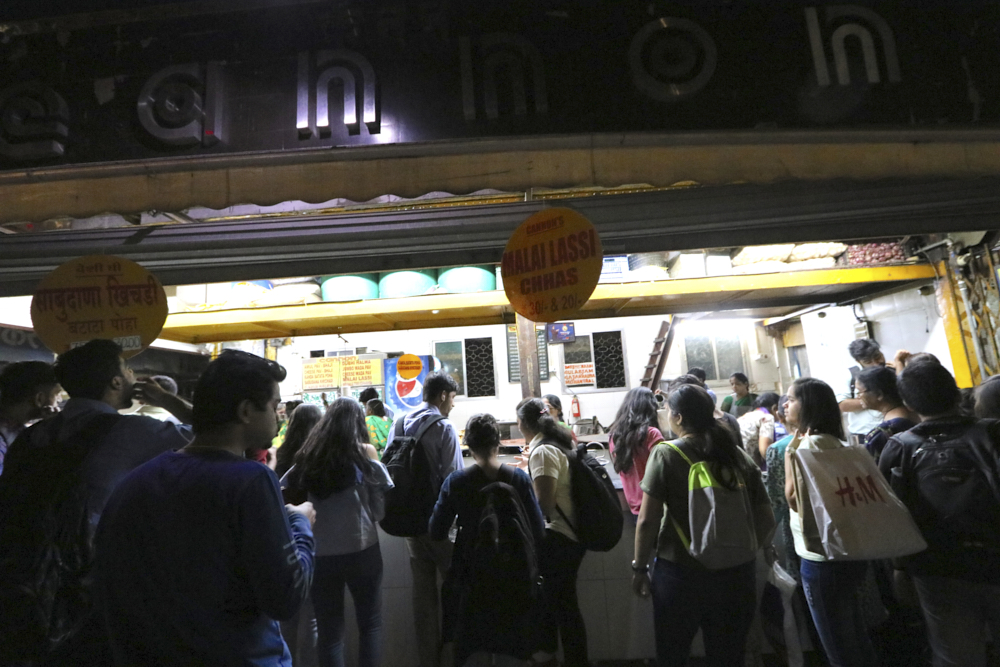 The best place to try this dish is a stall called Cannon Pav Bhaji near Chhatrapati Shivaji Maharaj Terminus Train Station (also known as CSMT Train Station). Their pav bhaji was among the many highlights of my time in Mumbai. 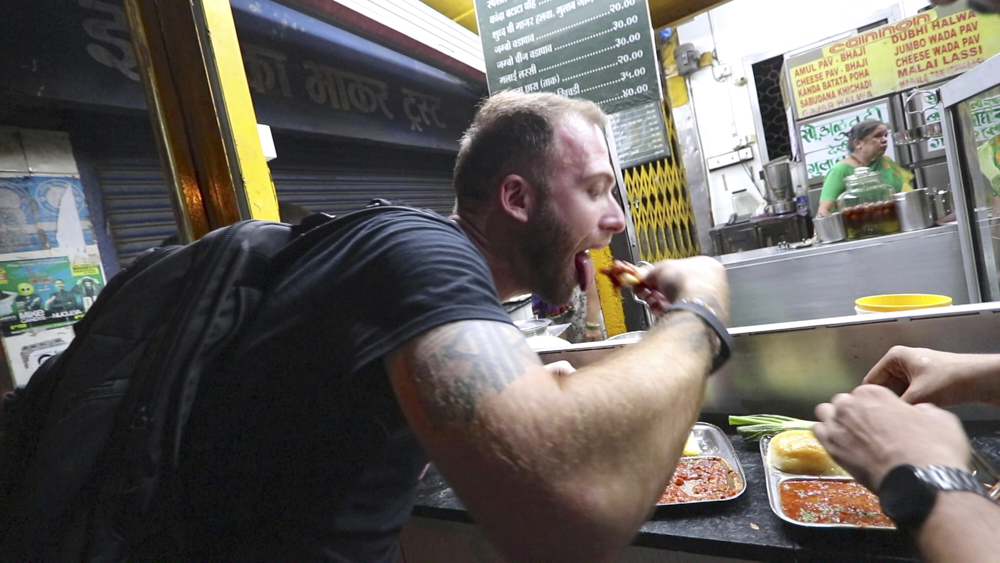 The soft, fluffy bun contrasted nicely with the creamy vegetable gravy and crunchy onions. And I’ll never forget the way the paste-like curry coated my tongue and unique Indian flavors exploded across my palate! It is a must when you visit Mumbai!

Check out the Top 10 Things to Do in Mumbai, India 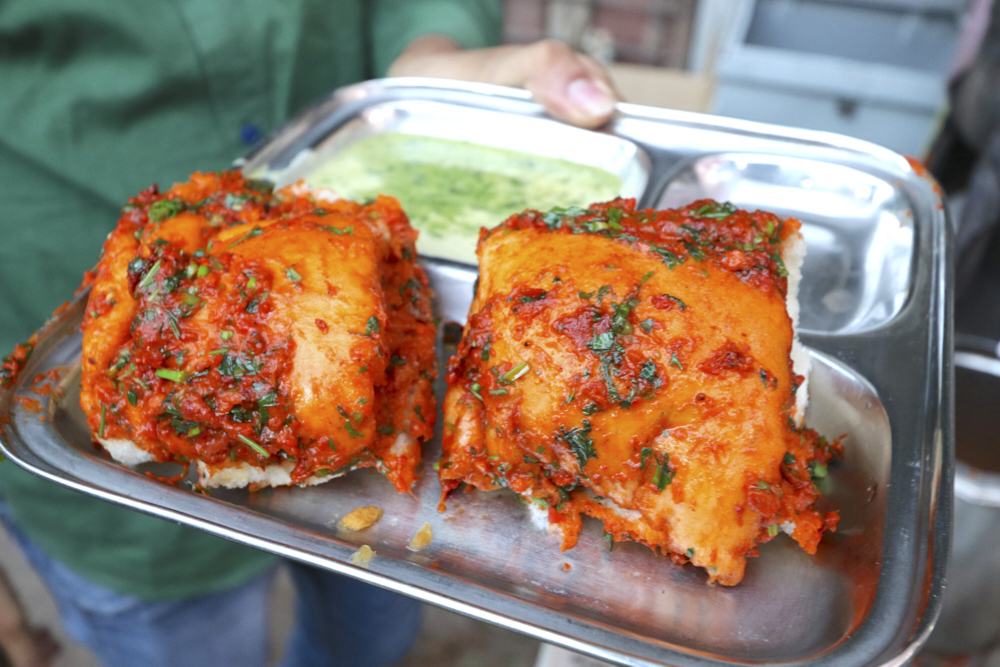 One thing you’ll quickly learn as you travel around India is that many dishes have different recipes, and even different names, depending on where you go. A favorite of mine that has countless variations is the masala vada pav, also known as the “Indian burger.” 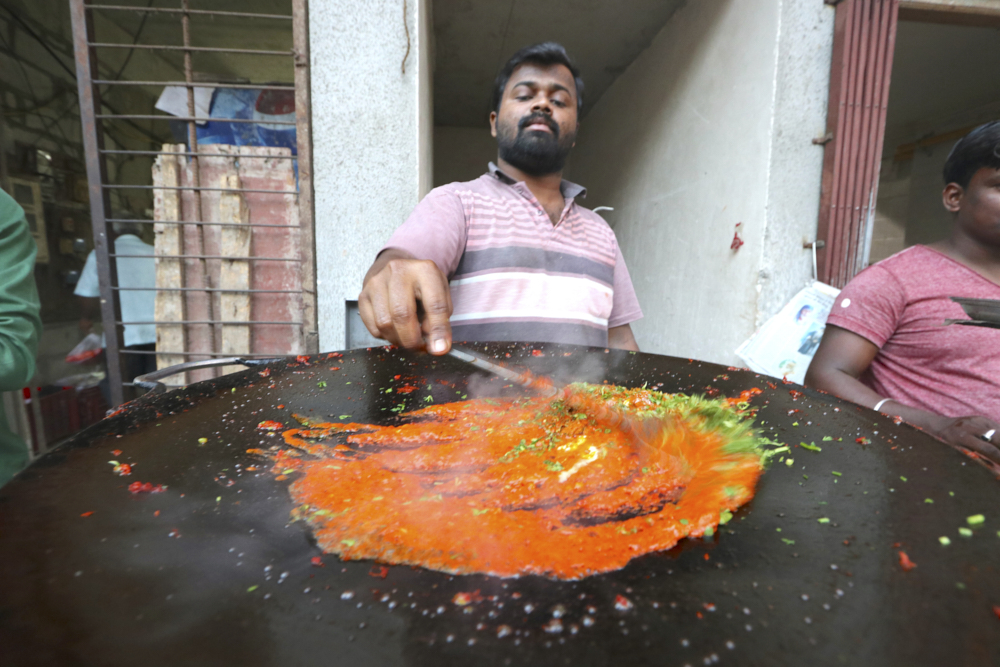 This incredible sandwich is made up of a breaded and deep-fried potato fritter between a soft bun. Some varieties add cheese, onions, corn chivda, chicken patties, or even mayo. 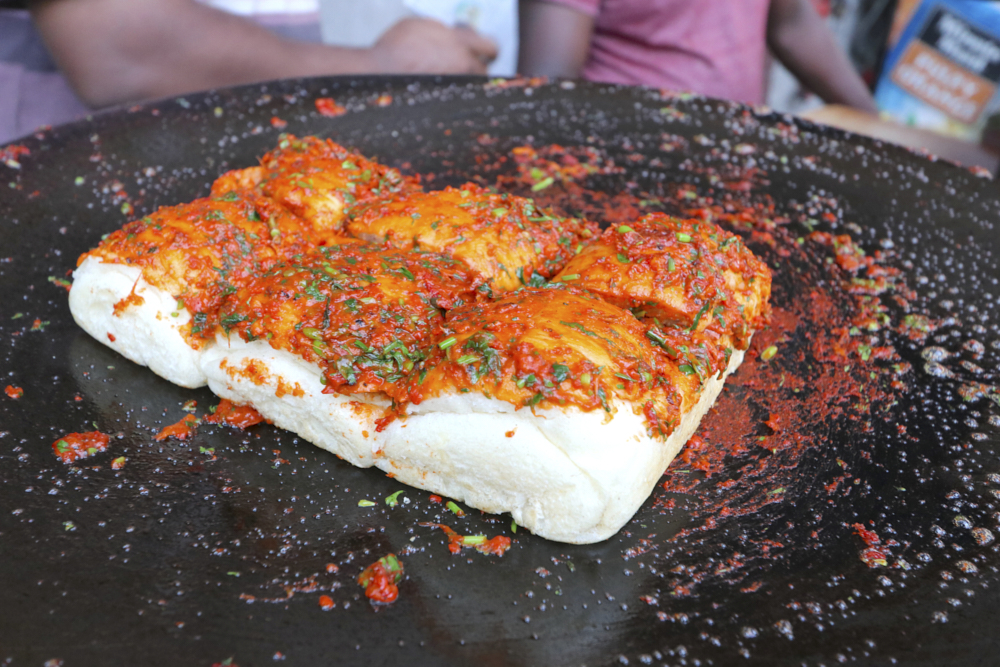 The kind I had while exploring the streets of Mumbai had an unbelievable bun that was cooked on the same grill as a rich, red masala. The vendor cooked the masala down to a thick, rich-looking paste. Then, he slathered it inside and atop the buns, adding dozens of outstanding Indian spices to the already unique dish. It was both spicy and crispy and came with an amazing mint chutney on the side!

Check out the 25 Indian Street Food Dishes You Must Eat in Kerala, India 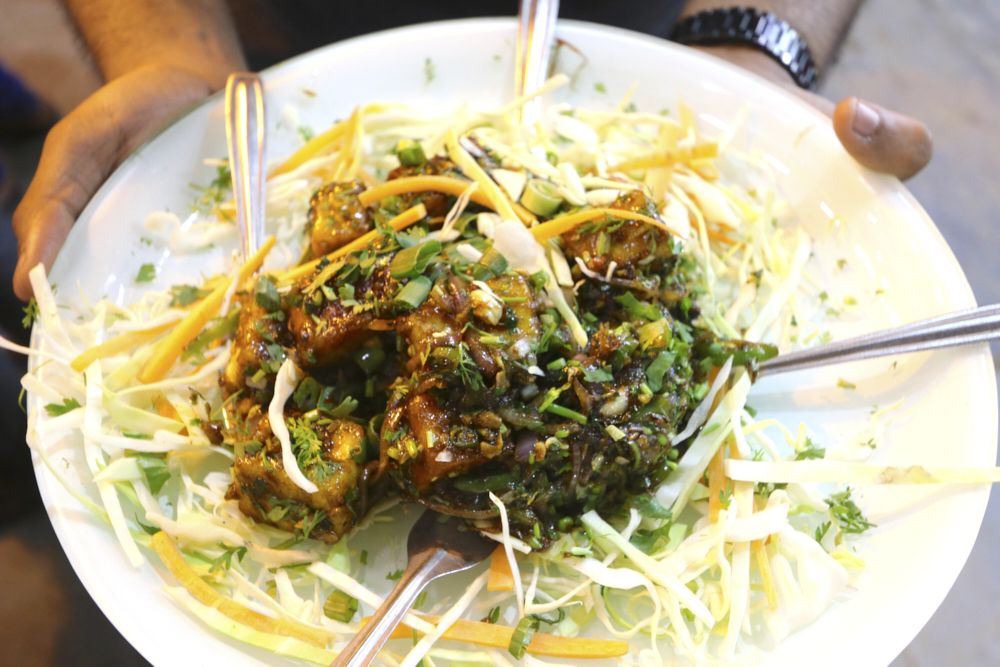 When you visit Mumbai, try not to be too overwhelmed with all of the famous locales that serve street food. There are many, but one that stands out is Juhu Beach, partly because it’s where you can find one of my all-time favorites, paneer chilli. 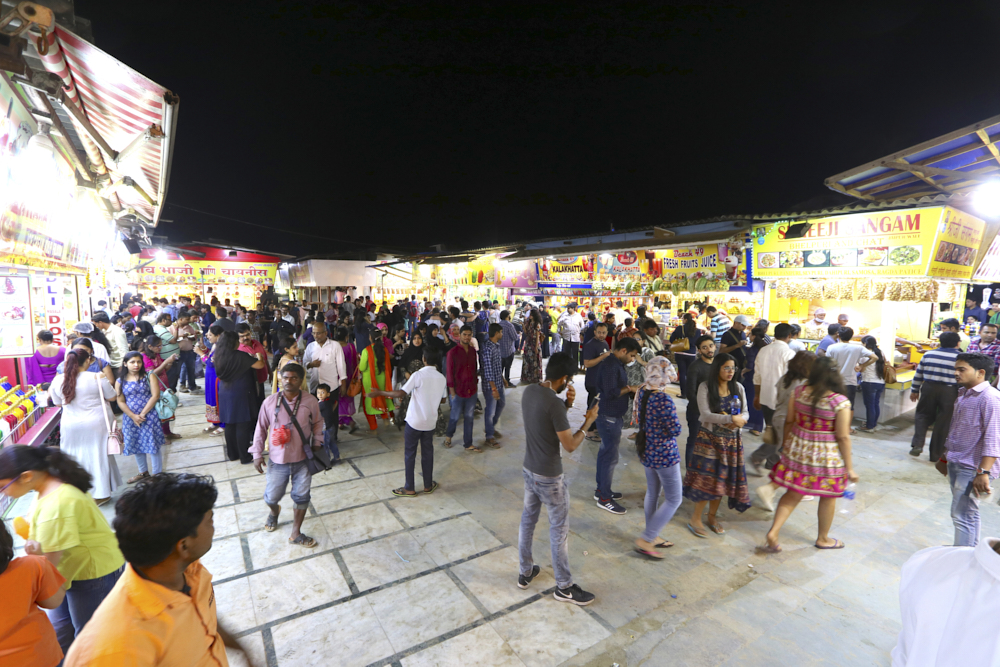 This unreal veg dish consists of deep-fried cubes of a non-melting cottage cheese called paneer, which is mixed with chili paste and rich Chinese sauces. The paneer mixture is then placed on top of a bed of shredded cabbage, carrots, and other vegetables. 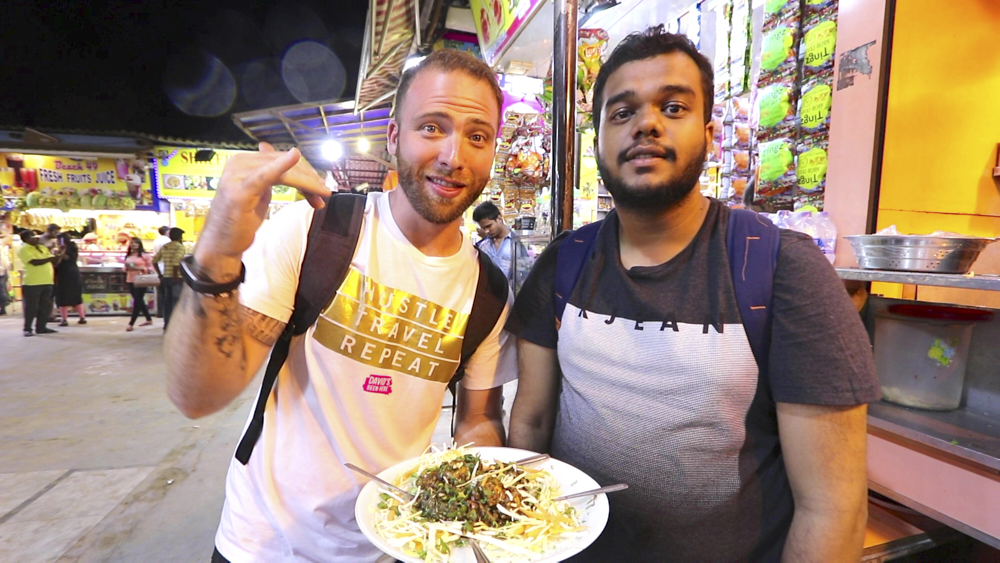 Words can’t fully describe how insanely flavorful this dish is. Every element of it works: the crisp vegetables, the hot but chewy paneer, the blend of Indian and Chinese flavors. It’s like they all marry one another and make love in your mouth! The best thing about it is the paneer, which is so firm that I almost mistook it for tofu the first time I had it. It’s easily one of the top Indian street foods in Mumbai, India!

Check out the 12 Meghalayan Dishes You Must Eat in Meghalaya, India 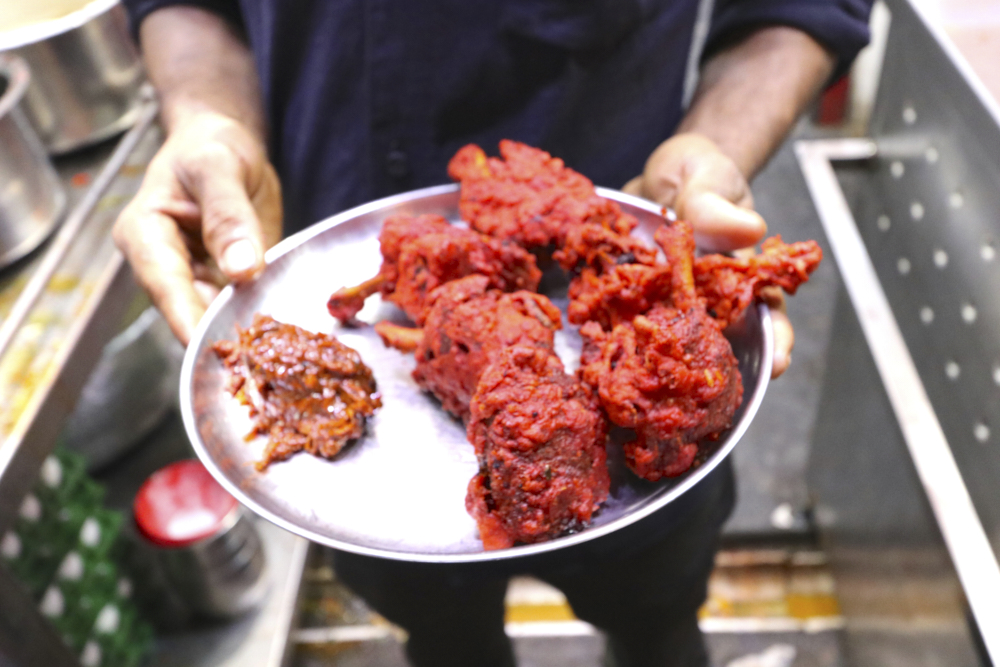 No, a chicken lollipop is not a chicken-flavored lollipop. Nor is it a lollipop-flavored chicken. It’s actually a fried chicken drumstick that looks similar to a lollipop when you hold it upright. But this dish is much more than your standard fried chicken. 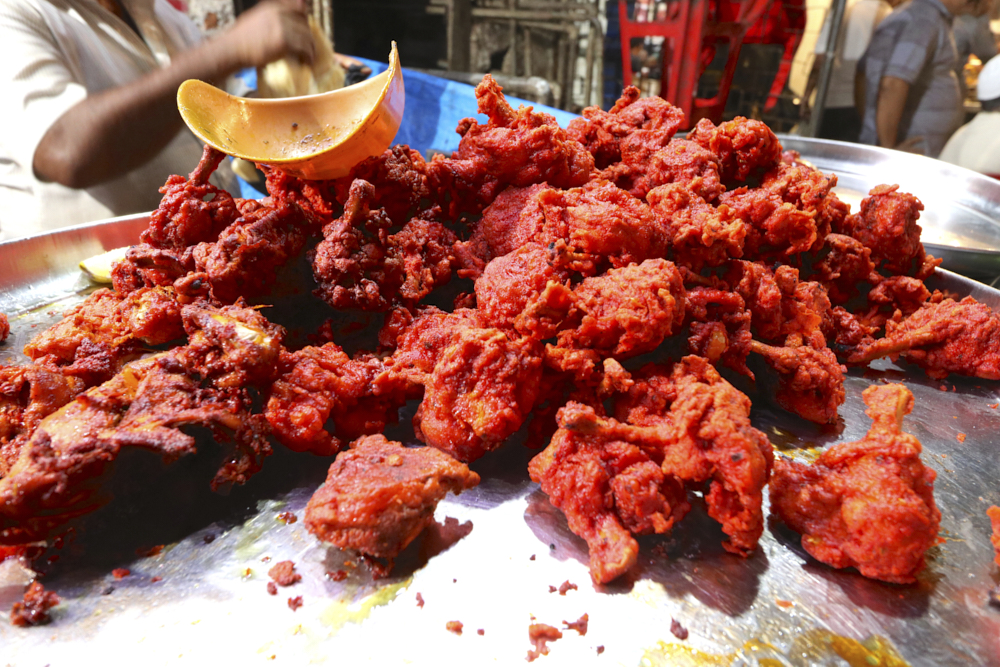 This chicken comes bathed in a vibrant, crimson-colored curry that actually stains everything it touches—including the chicken meat and your mouth! I suggest trying this dish along Mohammed Ali Road after dark. 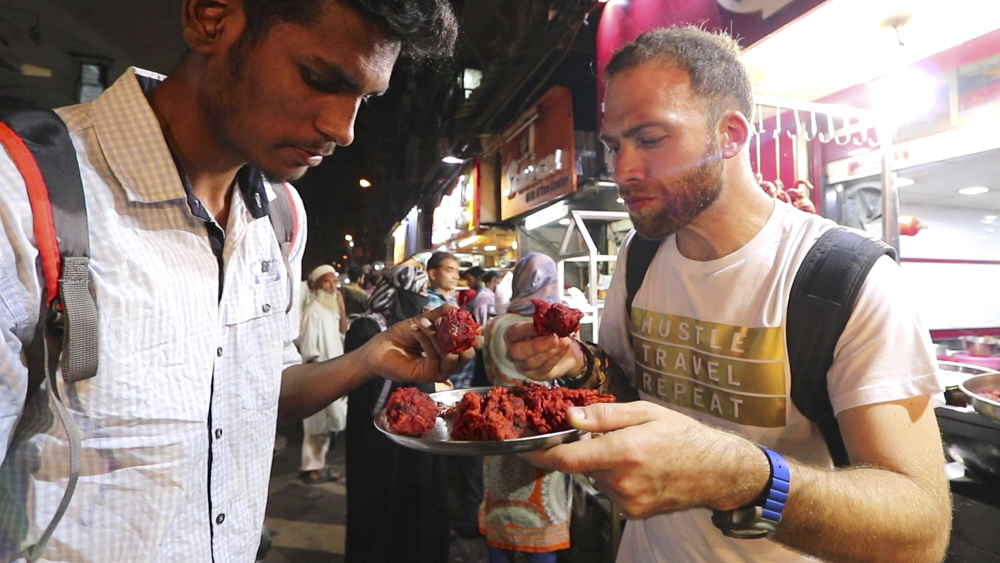 Because of the bright red color of the sauce, you might think chicken lollipops are spicy. But they’re not. There’s definitely a kick to them, for sure, but they’re far more flavorful than they are spicy. So many elements of the masala ping around on your taste buds with each bite. Dip it in the ginger sauce it comes with for a kick of heat and flavor!

Check out the Top 10 Things to See and Do in Hyderabad, India 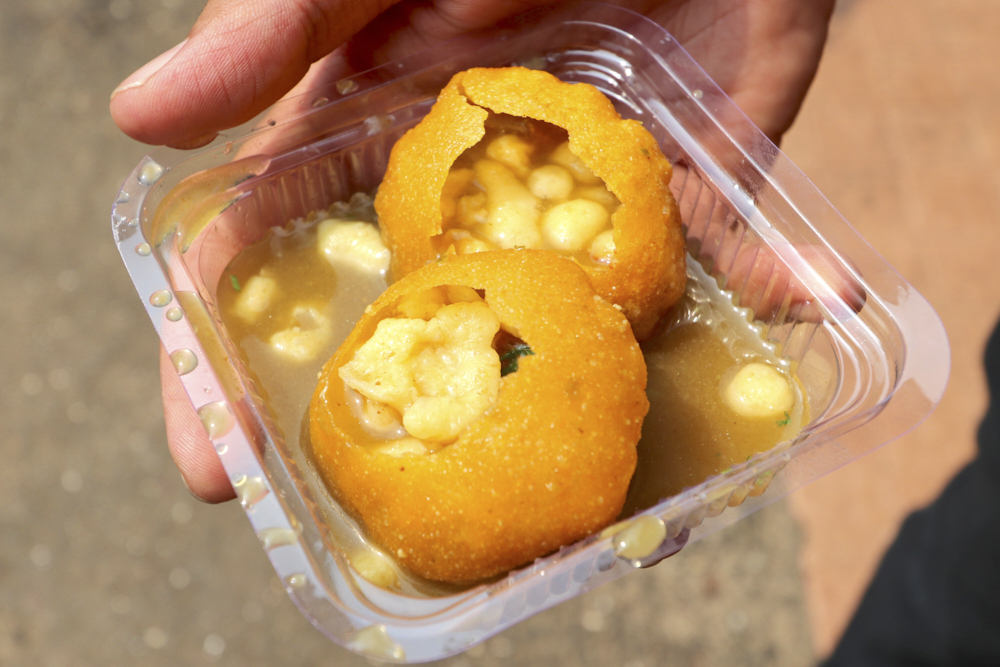 Anyone who knows me, or has seen my India vlogs on YouTube, knows there was no way I could talk about Mumbai’s street food without mentioning pani puri. It’s one of the most popular street foods throughout India, and for good reason. It’s a relatively simple Maharashtrian dish that is made up of a flatbread called puri, which puffs up into a crispy, hollow ball when it’s deep-fried. 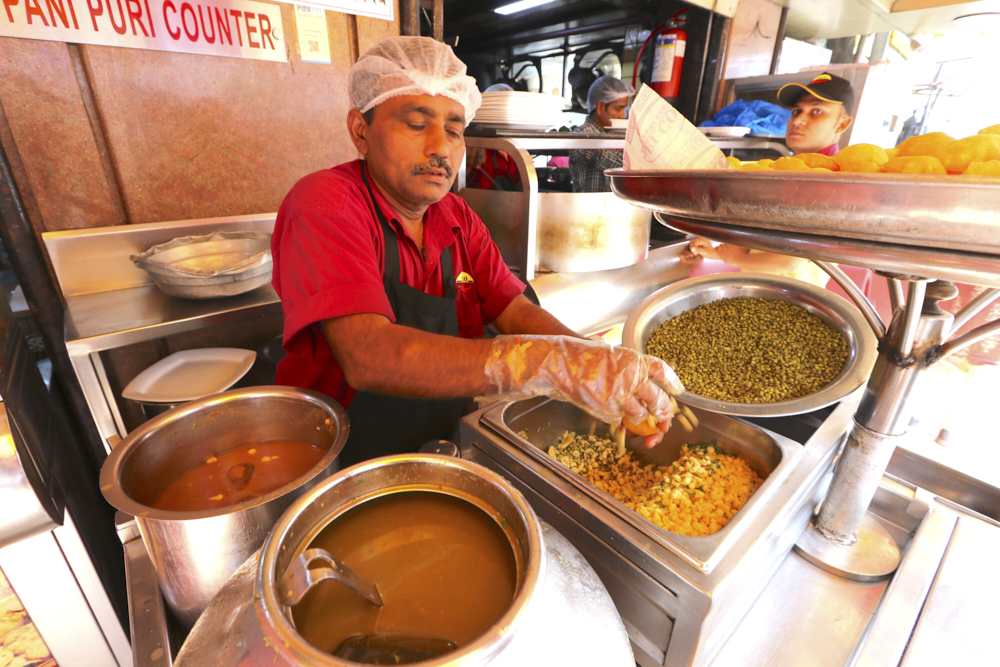 The vendor then taps a hole in the puri. They’ll then fill it with a mixture of flavor-rich soup-like water called pani. Other common ingredients include potatoes, onions, chickpeas, chaat masala, tamarind chutney, and chilies. 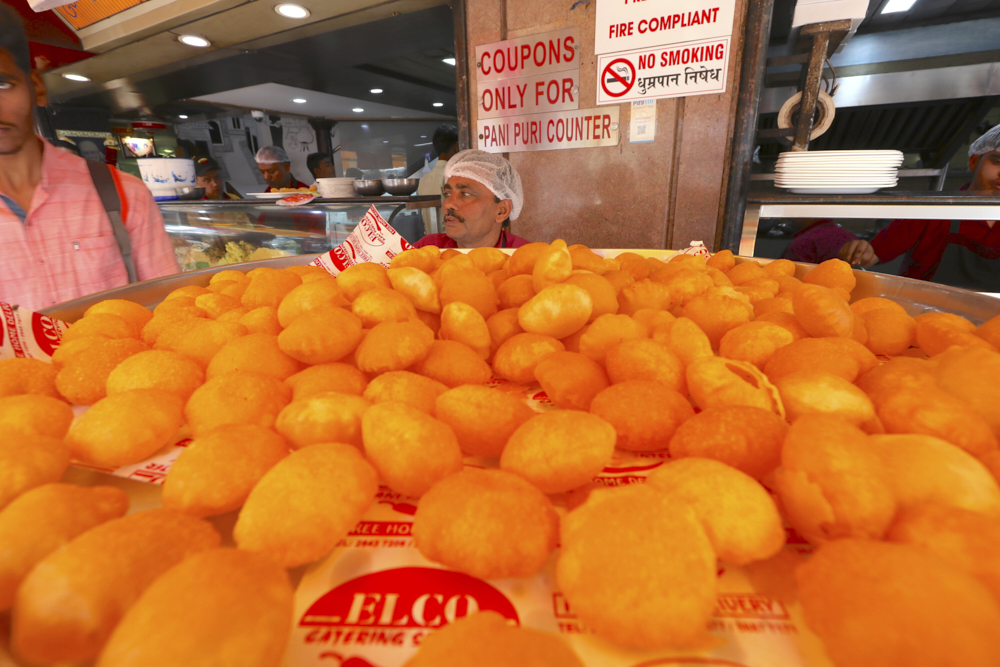 The end result is a unique treat that you eat in one huge bite. As soon as you bite down, the puri breaks apart, releasing the pani and allowing it to wash across your palate. It is nothing like I’ve ever had before. 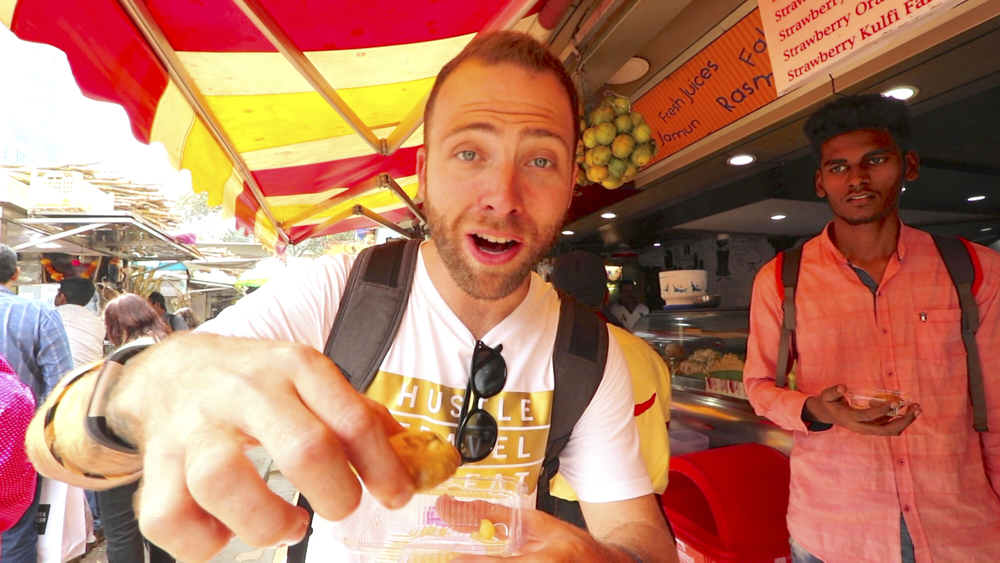 The flavor is the perfect combination of savory, sour, spicy, and sweet. The crunch of the puri with the tender chickpeas and soft potatoes is out of this world. To try the original pani puri, head over to Elco Restaurant in the Bandra neighborhood. That said, many inventive versions can be found throughout India! 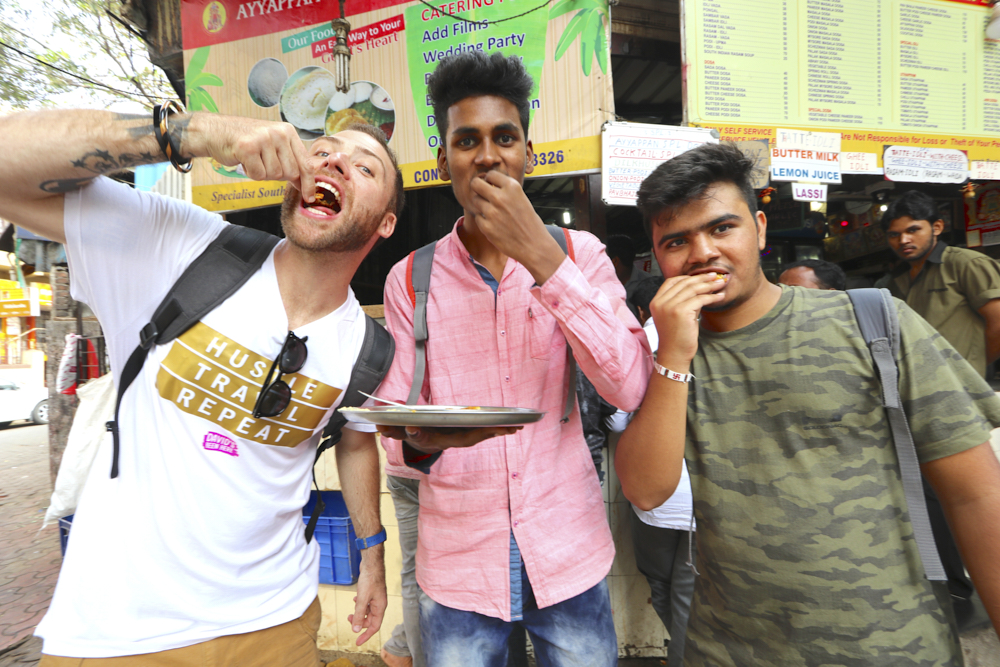 And that’s it! Those are my top 5 Indian street foods in Mumbai, India. Keep in mind, you can try countless dishes on the streets of the city, so consider this list a jumping-off point. The best thing to do is taste everything you come across to see which one you like the most. The great thing about Mumbai is that, with so many vendors and dishes available, something is bound to surprise you! Book a trip to Mumbai today to dive into the incredible world of Indian street food!