The Okavango Delta is a natural phenomenon that has exceptional beauty in the Kalahari Basin. It can be found north of Botswana. It is Africa’s third-largest inland river delta, covering an area of between 6,000 to 15,000 km2. The Okavango is seasonal flooded in the dry season, and the animals and plants have adjusted their movements and biological cycle with the rains and flooding. (UNESCO) Described it as “an exceptional example” of the interaction between climate and hydrological processes. The 1000th World Heritage Site to be listed by UNESCO was the delta. 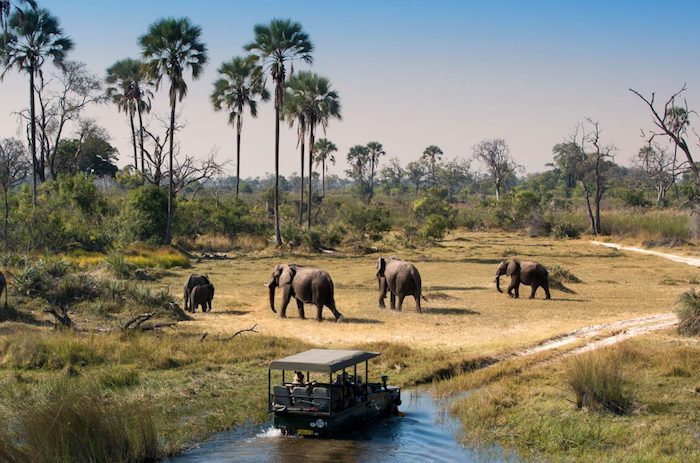 It is not the biggest in the world or Africa, but its size made it one of Africa’s Seven Natural Wonders. This list is not to be confused with the Seven Wonders of the World, which includes beauty like Mount Kilimanjaro and the Nile River. Two other inland deltas are larger than the Okavango: the Sudd, and the Inner Niger Delta. These are part of the Nile River and Niger Rivers respectively.

Where Is the Okavango Delta located?

This is the location of the delta in Botswana’s northwest, in the middle of the Kalahari Desert . It is the fourth largest desert in the world. This area’s sand absorbs any nutrients and water that may occasionally fall. Some animals and plants have learned to adapt to the Kalahari’s harsh climate, which is characterized by extreme heat during the day and bitter winter nights. The landscape is stunning in the middle of the desert basin. This is the transitional zone in which the Kalahari Sand is covered by the Delta – an oasis within the Kalahari Desert.

The history of the Delta is that it once belonged to the ancient Lake Makgadikgadi, which was mostly dried up over 11 000 centuries ago. Okavango Delta can be described as an alluvial fan. It is mostly flat and has a height variation up to 2 meters. The Okavango Delta is home to lush papyrus swamps and flood plains as well as a network of channels and lagoons. It also has lots of islands, from tiny mounds to Chief’s Island, the largest. The islands are visible best during dry seasons, when they are accessible and can be explored.

Flood waters from Angolan highlands flow through the Okavango River. Its source is the Rio Cubango. The Okavango Delta is where the river flows instead of dripping into the ocean. Only 2% of total flood water flows into Lake Ngami as the water in the Delta evaporates, percolates or transpires. It takes approximately a month for water to reach the delta at the source, and another three months for it to filter through the entire delta. The delta’s size changes between 6,000km2 and 15,000km2. It takes water from the highlands over 1000kms to reach the delta. This is because there is only 60m elevation drop.

The interesting thing about the Delta is that it floods during Botswana’s dry winter season. This is because the Okavango River water is what causes the flooding. It’s not the local rain that causes flooding.

Wildlife in the Delta

The Okavango’s permanent water attracts many animals, particularly during dry seasons. The game shifts between the delta itself and the areas surrounding it. The large game will move to the delta’s outer regions during the rainy season. They move to the delta when the season is dry in search for water and remaining grazing areas, especially into the Moremi Game Reserve.

The Okavango is the world’s largest and most important inland wetland. It hosts 2500 species of plants and 65 species of fish, as well as 20 large herbivores with their attendant predators, and over 450 species birds. There are many big game species in the area, including Africa’s Big Five – African elephants, African lions, leopards, rhinos, leopards, rhinos, and Cape buffalo. This is the only place on Earth that you can find all of these animals in one location.

There are more than 450 bird species in the Okavango Delta. These include ostriches, bataleur Eagles (thought to have been the bird depicted in artifacts from Great Zimbabwe’s ancient city), Ospreys, African Cuckoo Hawks, several types vultures, owls and hawks.