Located in southeastern Sri Lanka, Yala National Park is protected land spanning an area of 611 square kilometers. It is located approximately 322 kilometers from Sri Lanka’s capital city, Colombo. Every year hundreds of thousands of visitors are lucky enough to spot some of Yala’s wild inhabitants while on safari in the park. Yala is home to over 200 bird species, over 40 types of mammals, more than 45 reptile species, and a number of amphibians and fish. Additionally, it is not uncommon to spot elephant herds, water buffalo, egrets, and crocodiles when touring this incredible protected area. The real treat, however, is spotting one of Yala’s mysterious leopards. 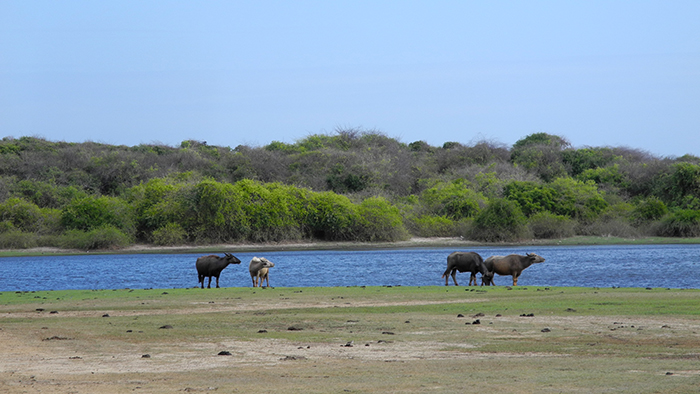 Yala is the most visited National Park in the country, and plays an integral role in Sri Lanka’s growing ecotourism. It was declared a wildlife sanctuary in 1938, and has since been one of Sri Lanka’s most popular tourist destinations. The park typically closes for a short time between September and October, so it is always best to check ahead before making arrangements to visit.

The park is divided into Yala West (Ruhuna) and Yala East, and sectioned into 5 blocks. Block 1 contains most of the park’s leopard population, and its landscape ranges from dense jungle to pristine virgin beaches. 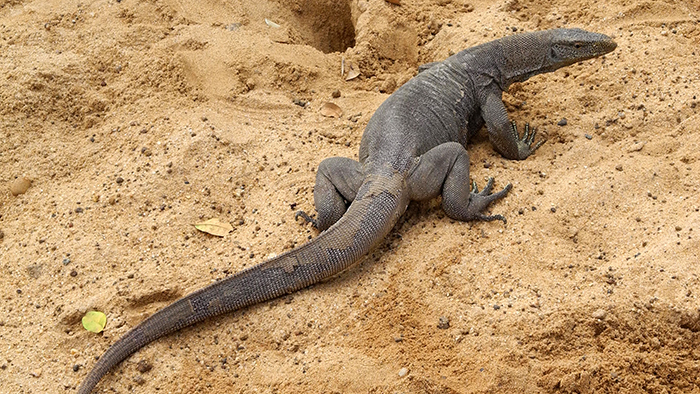 Yala National Park’s Block 1 section is the most visited sector of the park because of its rich biodiversity and because it contains the densest leopard population in Asia! Visitors can arrange Jeep safaris and experience Yala’s stunning residents firsthand. Deer, elephants, wild boar, large water monitors, and curious monkeys are just some of the park’s living attractions. Yala is a bird-watcher’s dream, so bring binoculars for optimal viewing of storks, pelicans, parrots, eagles, herons, ibises, sandpipers, and more. 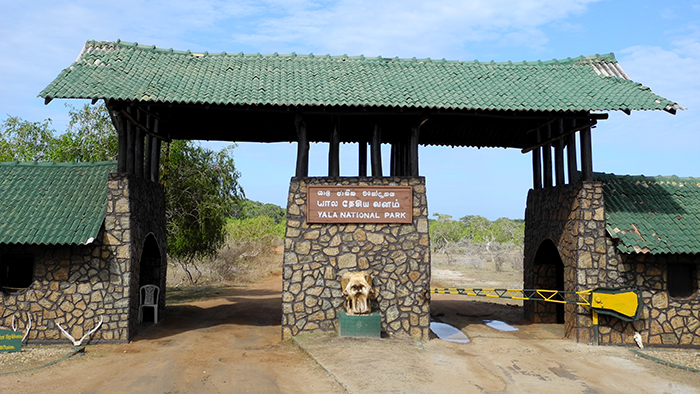 Although visitors are not allowed to walk the grounds on their own, the Jeep tours offer great vantage points from safe distances, especially for snapping once in a lifetime photographs. Ask your tour guide to take you along the coastline to pass by Yala National Park’s small fishing village. Rows of huts and small motorboats are the only giveaway that fishermen still dock and depart from Yala’s beaches. Tourists are allowed, however, to walk certain sections of the beach and take pictures from the sand. It is sobering to think that in 2004, the notorious Indian Ocean Tsunami affected the entire coastline of Yala National Park, and killed over one hundred park staff and tourists. In the years since the tsunami, Yala National Park’s wildlife has recovered considerably and continues to delight international visitors of all ages. 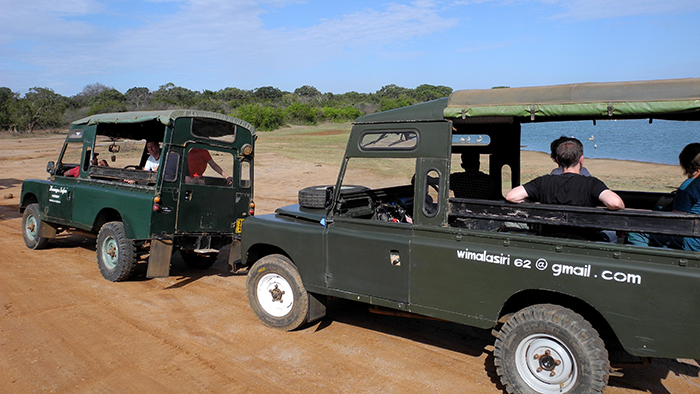 Safaris can be arranged through Hotel Elephant Reach or various other private companies. They take place almost daily in the early morning and late afternoon hours. This ensures that the weather is cool enough to spot animals about the grounds. Yala’s ecosystems are as diverse as the animals that inhabit them: moist forests, dry forests, thorny bush, grasslands, both fresh water and brackish marshes, sandy beaches, and rocky areas are all found within Yala’s borders. 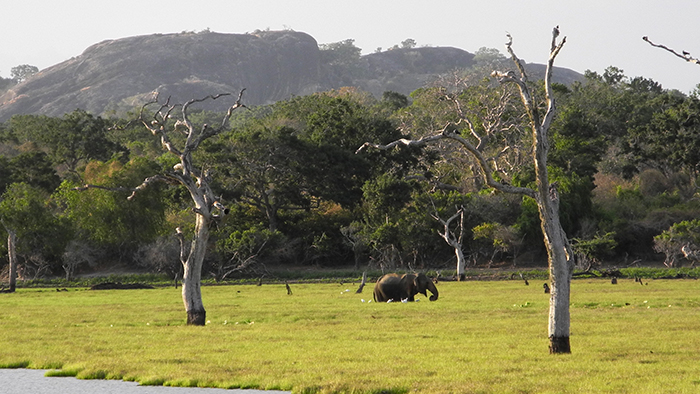 Yala’s diverse terrain has been supporting human civilizations and animals for thousands of years as evidenced by archaeological sites. The ancient Kingdom of Ruhuna flourished here over 2,500 years ago. Situlpahuwa, Akasa Chetiya and Magul Mahavihara are other historical spots in Yala. They are believed to have been Buddhist monasteries dating back to the first and second centuries. 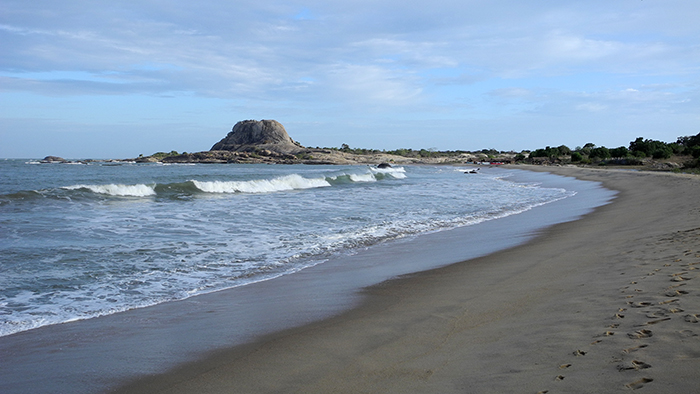 A modest gratuity is customarily given to the guide and or the driver after the safari tour. Couples should tip between $15 and $20, while larger groups should calculate the tip to be between $7 and $10 per person. Yala’s drivers and guides work hard to maximize your safari experience, and so tips are always graciously welcomed and usually well earned! If you don’t bring your own supplies, there is a small store located at the park’s entrance if you would like to buy water and light snacks.

Best time to go: The best time to visit Yala is from February to September. For the best chance to see the park’s animals, arrange your visit in June, July, or August. These months are the driest and the animals congregate around the park’s fresh water holes. From mid-October to mid-January Yala typically experiences significant rainfall, however this is when the park is the greenest.

Getting to Yala: Most people take the scenic route from Colombo or Galle, which runs along the southern coast of Sri Lanka. There are several beautiful towns along the way including Bentota, Hikkaduwa, Unawatuna, Mirissa, Tangalle, Hambantota, and Tissamaharama or “Tissa” for short. This route is also the longest at approximately 300 kilometers. It typically takes 7 to 8 hours to reach Yala.

The faster route (250 kilometers) is an interior route from Colombo, which takes less than six hours, but does include the beautiful coastal views. 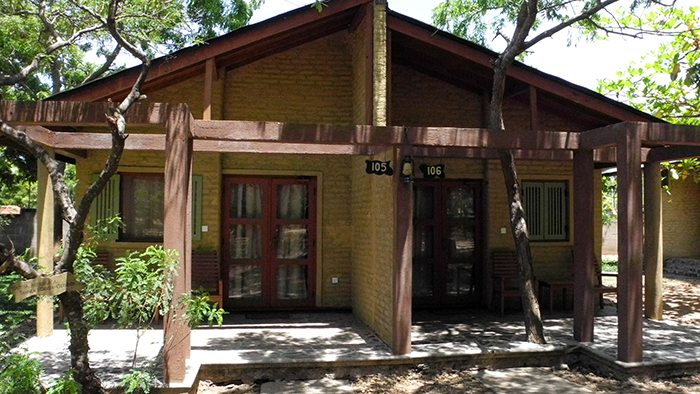 Your experience in Yala National Park, like in the rest of Sri Lanka, should be memorable and easy to plan. By choosing to book with Hotel Elephant Reach, you would be getting the best of both worlds; luxury eco-friendly accommodations and the ability to effortlessly arrange excursions and tours to Yala and other nearby attractions. By leaving the planning to Elephant Reach’s knowledgeable staff, your experience in Yala will be as rich and unforgettable as you imagined. Hotel Elephant Reach is only a 30-minute drive from Yala National Park and a ten-minute drive from the town of Tissamaharama. 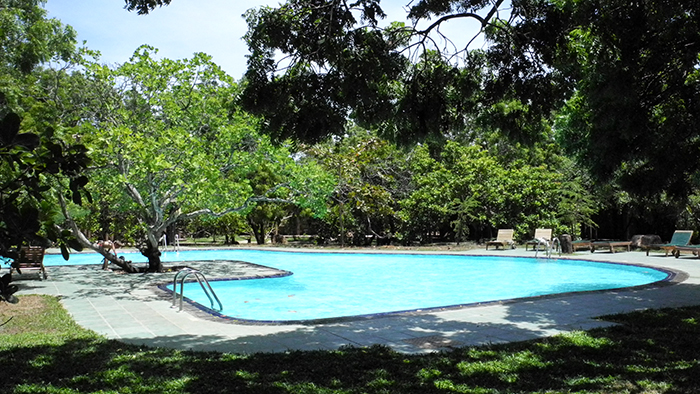 The hotel features 21 lodges and 14 standard rooms, all of which come with air conditioning, a mini bar, and an electronic safe. The lodges (chalets) come stocked with a hair dryer, DVD player, 20-inch television, and a spacious bathroom. The hotel is a unique nature resort that couldn’t possibly be located in a more beautiful part of the country. Relax poolside, stroll the landscaped garden, dine in the hotel’s restaurant, or stop into Mahout’s Bar for a nightcap. Your stay at Hotel Elephant Reach will be as memorable as your tour of Yala National Park. 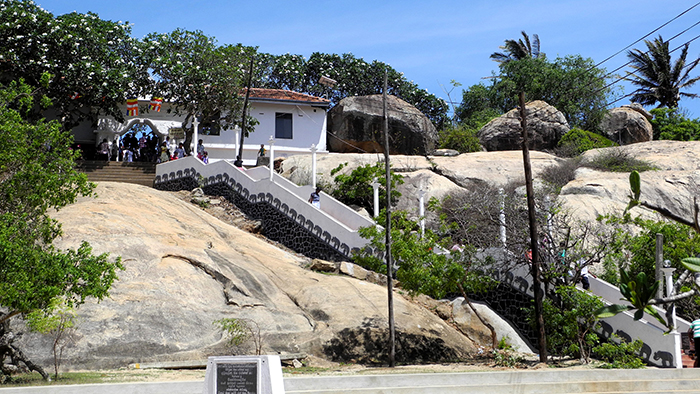 While exploring southeast Sri Lanka, do not miss out on the Buddhist Temple of Kirinda, also known as the Temple of the Rock. Only a fifteen-minute drive from Yala National Park, Kirinda’s temple is a must-do that boasts stunning views of the coastline atop a giant round rock. Visitors can explore in and around the white shrine, and see the temple’s main attraction: the statue of Queen Viharamaha Devi. 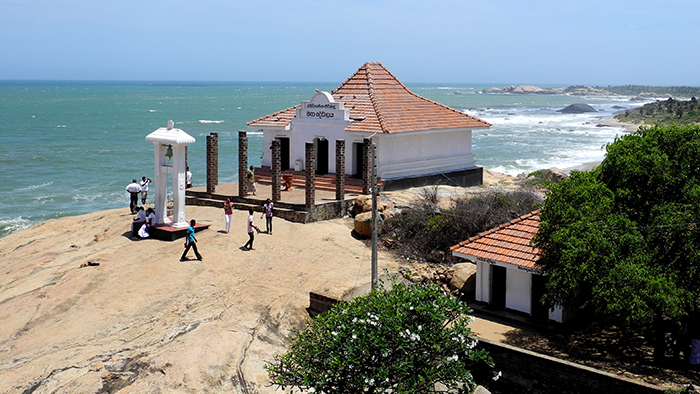 Sri Lankan legend says that the Kirinda Temple site is where the ill-fated queen drifted ashore after being sacrificed to the sea to atone for her father’s sin of executing a monk in a cauldron of scalding oil. Inside the shrine there are Buddhist statues and paintings, but the temple’s true wonder is its location. Visitors can spend the day gazing into the expansive ocean below or walking along the shore just feet from the crashing waves. Kirinda, like all temples in Sri Lanka, requires guests to remove their shoes before entering. 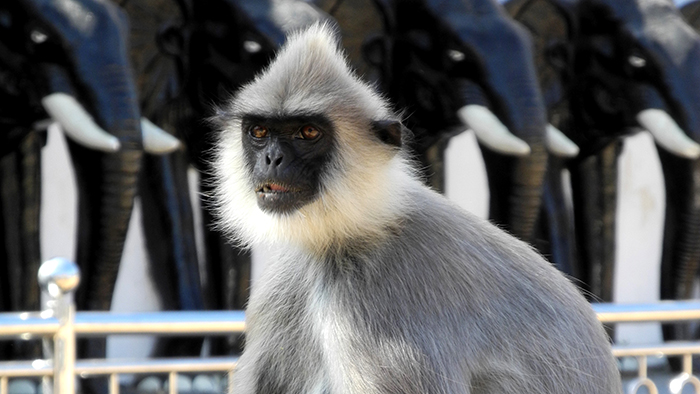 A 45-minute drive from Yala National Park, Kataragama is a busy pilgrimage town with a long history. There is evidence in Kataragama that suggests Mesolithic and Neolithic inhabitants lived in the area over 125,000 years ago! Kataragama is located nearby Tissamaharama (“Tissa” for short), which is a small town that once served as the capital of the Kingdom of Ruhuna over 2,500 years ago. 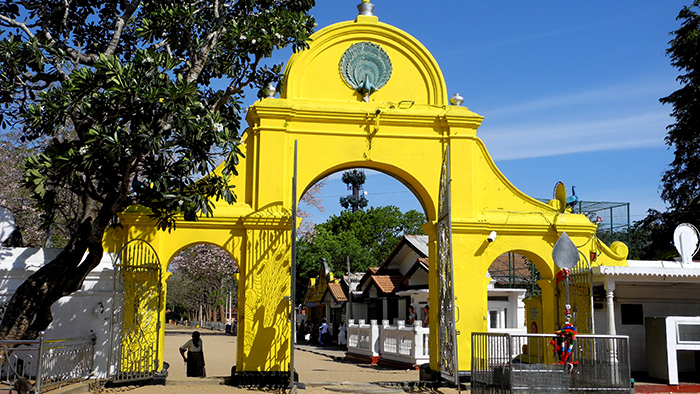 Kataragama is a sacred city for many religions, which makes it a popular day trip from Yala. Hindus, Muslims, Buddhists, and Christians flock here to worship and pray at the temples. Many of these pilgrims arrive on foot! At specific times each day, the Hindu temples of Kataragama present poojas (devotions) to their gods, which are usually gifts of flowers and fruits. Chanting, ringing bells, and burning incense are all used during pooja time. Visitors are welcome to observe these incredible rituals. 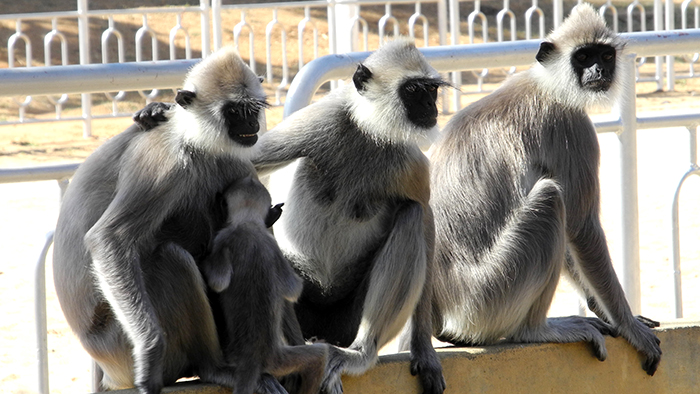 For some, the best part of Kataragama besides visiting the temples, are the monkeys. The city is full of them, but while some of these mischievous primates are super curious, most are quite shy. I would not recommend touching them, but people do throw food at them. They roam throughout the city, though they like to hang out at the Kataragama information center. 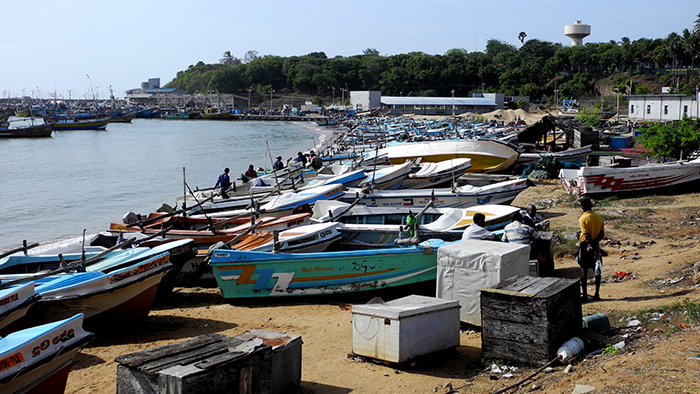 Located about a 25-minute drive from Hotel Elephant Reach, is Hambantota, a coastal town that makes for an ideal day trip. Historically Hambantota was the main port for seafaring traders from the Far East who traveled to and from the ancient Kingdom of Ruhuna. Hambantota was badly affected by the 2004 Indian Ocean Tsunami, in which hundreds of the town’s people were killed. 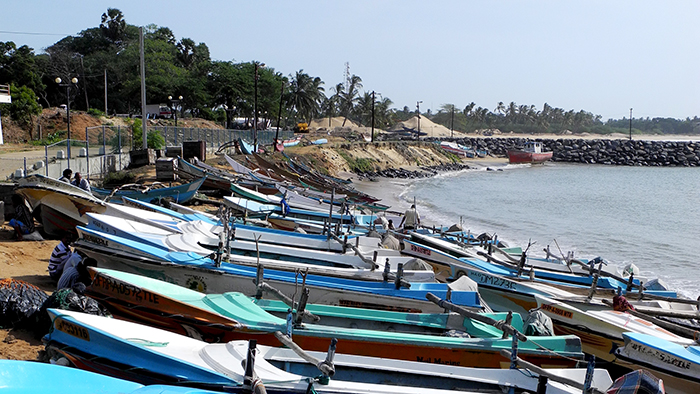 Nowadays, Hambantota is enjoying advancing infrastructural re-growth at a steady pace thanks to international interest in reviving the area. There are plans underway to expand the port and revamp the city’s docks to house large shipbuilding projects and eventually develop the area into the biggest port in Southeast Asia. 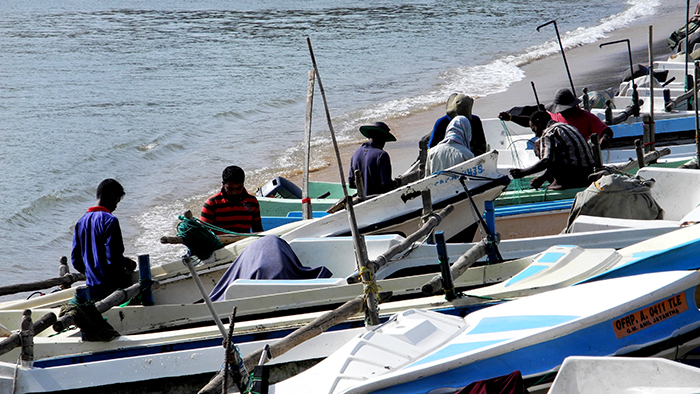 Hambantota is also a die-hard sports town. It played host to the 2011 Cricket World Cup, and has a bid out to host the 2018 Commonwealth Games. Hambantota is also known as the salt capital of Sri Lanka, and supplies roughly 30% of the country’s salt. Watch out for the salt deposits on your way into Hambantota from Yala National Park. Visitors can stroll the coast and get incredible photographs of the fishermen with their boats and daily catches, or stop into one of the local restaurants to try the area’s specialty, Kalu Dodol, a tasty sweet meat. 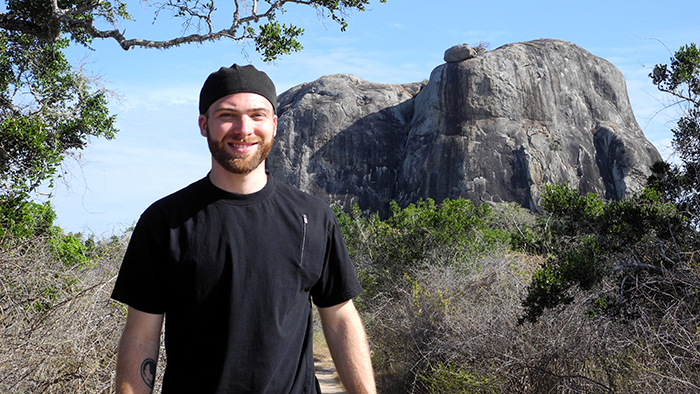 Yala National Park, like so many other wildlife reserves in the country, is an incredible experience that I will never forget. Unfortunately, during my visit in August 2011, I was unable to spot one of the elusive leopards that live in the park. I did, however, see dozens of elephants, birds, land monitors, crocs, and other animals. Consider yourself warned- the safari Jeep tours can get bumpy!

Bring sunglasses, cotton clothing, comfortable shoes, water, and charge your camera because the pictures will be incredible! Also do not forget to bring cash for tipping. Hold on tight as you explore Yala’s diverse terrain. Most people come to Southeast Sri Lanka for two to three days, which I think is the perfect amount of time needed to explore Yala National Park and some of the surrounding towns in the Hambantota district. The area has a uniquely rich history and culture. You may need to book two separate safari tours to be able to explore Sithulpawwa Rock Temple. It is located deep within Yala National Park and is a 2,200-year-old Buddhist monastic site that features Brahmi scripts, 10-foot-high pillars jutting out of the ground, and ancient painting fragments. It sits atop an enormous rock formation, and the views are worth the hike! Young children may not do well with this attraction. 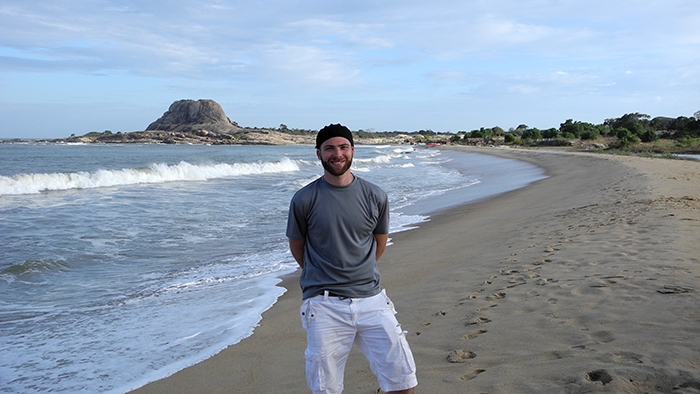 The best views in the house, however, are at the rock temple in Kirinda. The ocean below is mesmerizing. Kataragama’s monkeys are everywhere, but do not taunt them with food. It is all right to toss them food like fruits or nuts, but I would not attempt to hand feed them. They are not anybody’s pets, and can pass a variety of diseases on to humans.

Hotel Elephant Reach is by no means the only hotel in the area, but it came highly recommended. My stay there was a real treat. The hotel is peaceful and the staff is very professional and friendly. You may opt to stay within the park to take full advantage of your time in Yala. There are several luxury safari camps operating near the entrance to the park (the government recently banned camps from operating within the park), most of which offer fine dining, private tents, and all-inclusive rates. Overall, my trip to the area was adventurous and distinctive, but I will have to visit again soon to see the mysterious leopard that twice escaped me! Hopefully you will have better luck.

Did you enjoy our article about what to see in Yala National Park? Leave us a question or comment below!