The picturesque town of Regensburg is known for being one of the best-preserved medieval cities in Europe and also the oldest city along the Danube along with being a UNESCO World Heritage Site. When you walk through Regensburg you walk through history. 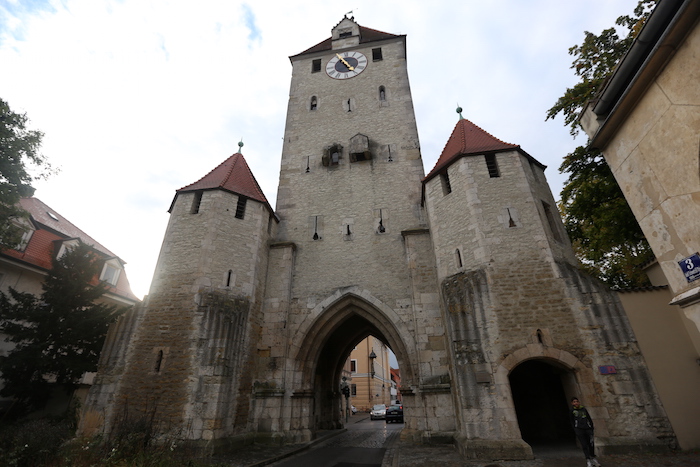 The city was first settled in during the Stone Age, later the Celts named it Radasbona and in the year 90 A.D the Romans built a fort here.

During the reign of Marcus Aurelius around the year 179 A.D. they built a new fortress called Castra Regina or fortress by the river Regen. 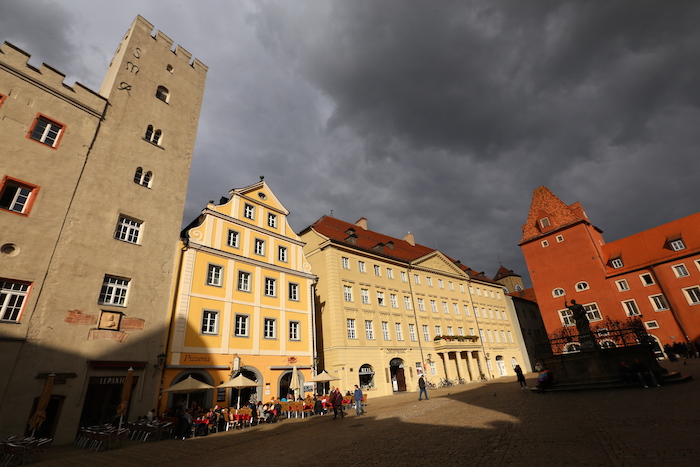 In the year 530 A.D. it became the capital of Bavaria and lasted until the 1245 when it became a free Imperial city. During WWII it was spared, being completely untouched by a bomb. Here are 5 must dos in Regensburg, Germany! 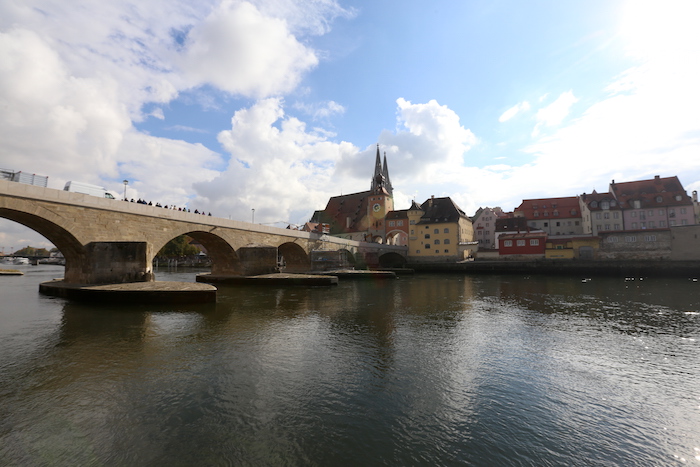 The 16 arched old stone bridge is a masterpiece of medieval engineering. It was constructed in the 12th century and crosses the Danube river. For 800 years it was the sole bridge of Regensburg until the 1930s when they built the Nibelungen Bridge. It was built in only 11 years from 1135-46. 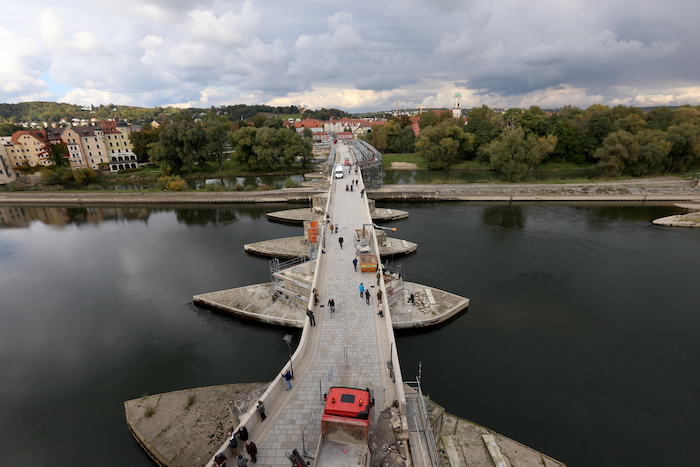 Throughout history many important figures have used the bridge to cross the Danube. Louis VII of France and his army used it to cross the Danube on their way to the Second Crusade. It was also the model bridge for all the bridges built in the 12th and 13th century across Europe. Some of those are the Augustus Bridge in Dresden and the Judith bridge in Prague. 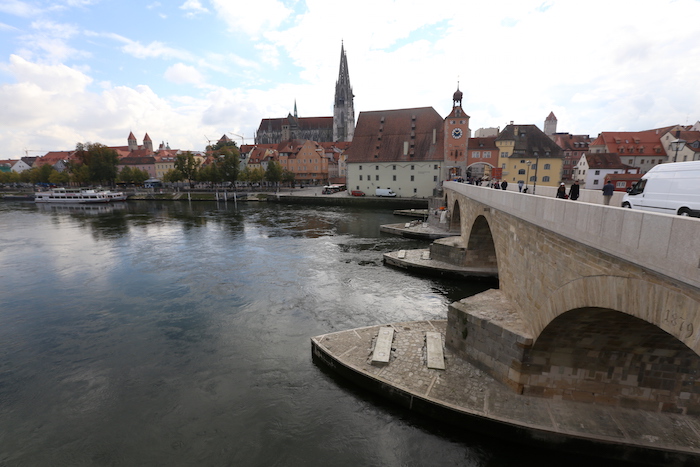 To get great pictures of the bridge I suggest you cross the bridge and go down to the island of Oberer Wohrd. From there you can walk to Am Beschlacht street get great views of the old town of Regensburg and the old stone bridge. 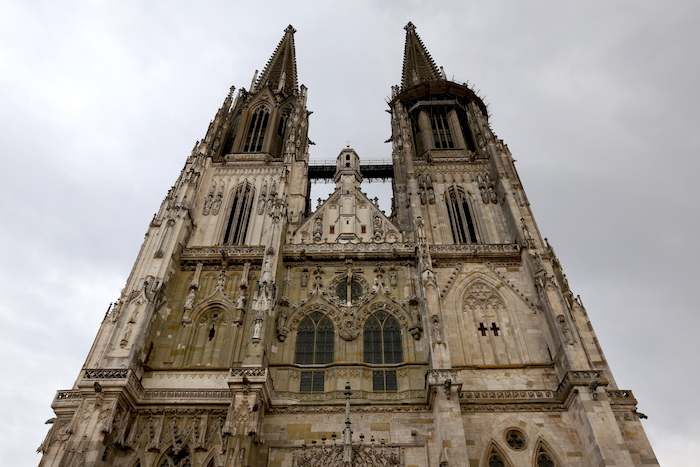 Regensburg Cathedral dominates the city’s skyline and is close to the banks of the Danube.  Dedicated to St Peter, it is one of the top places to visit in the city and is a perfect example of Gothic architecture.  It is also the seat of dioceses of Regensburg and has a consideration history. 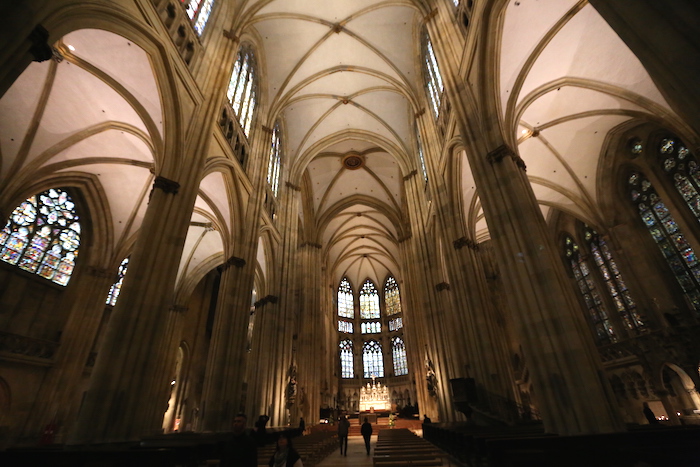 The first church on the site dates to around 700 when St Boniface choose the former North Gate of the old Roman fort as the location for the bishop’s seat.  The cathedral has seen some damage over the centuries and was burnt down twice during the late 1100s.  The rebuilding saw the magnificent Gothic building that I visited.  There were some later additions such as Baroque frescoes commissioned by Ludwig I of Bavaria and a major restoration project took place just after the turn of the millennium. 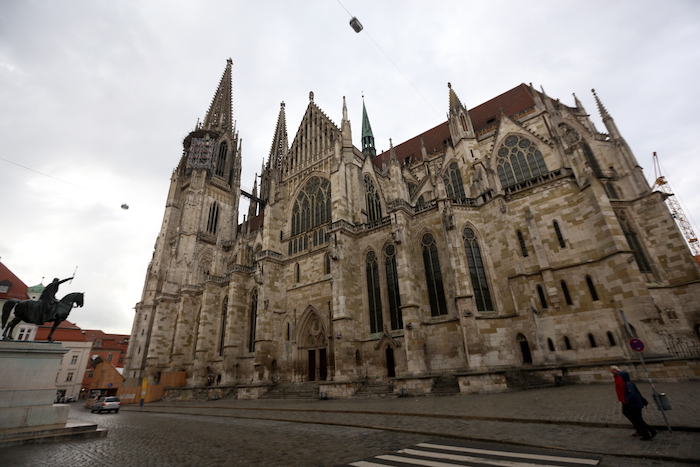 Some of the interesting features about the cathedral include that it is separated from its older cloister.  This happened when it was rebuilt and the whole building moved a little to the south-west, leaving the cloister at its original location.  You can also see an Eselstrum tower – this is to the north of the cathedral and was built to move construction material, a job it still helps with even today.  There are also some stunning stained glass windows around the building, many of which date from the 1220s and 1370s.

Views from the Tower 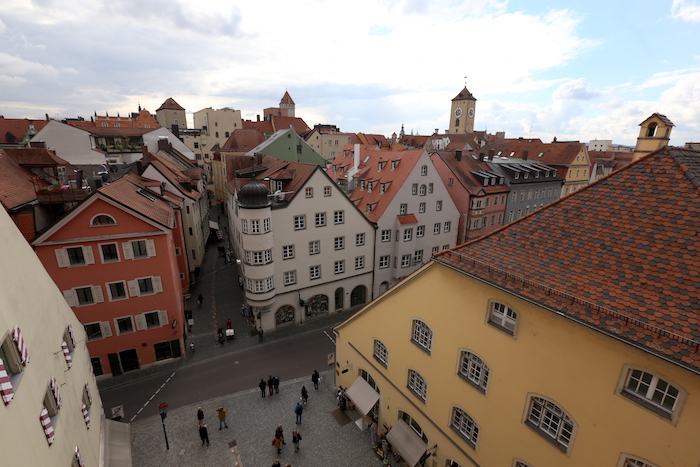 One of the best ways to see any city is from up high and I had the chance to climb the clock tower that stands at the south end of the bridge.  Originally, the Stone Bridge had three towers – north, middle and south.  The original south and middle towers were built around 1300 and the chapel of St Margaret was beside the south one. 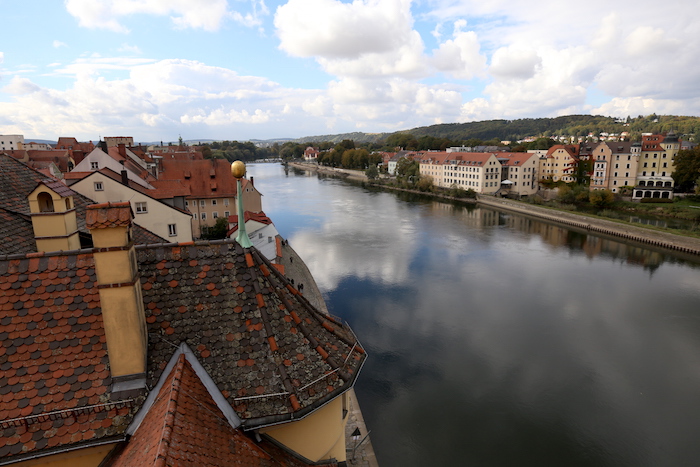 The north tower was originally heavily fortified and had a drawbridge but it was damaged during the Napoleonic Wars in 1809.  Both the south and middle towers were destroyed in the 1600s and when the south tower was rebuilt, a clock was added.  The tower is now a great spot to get views across the city as well as along the Danube. 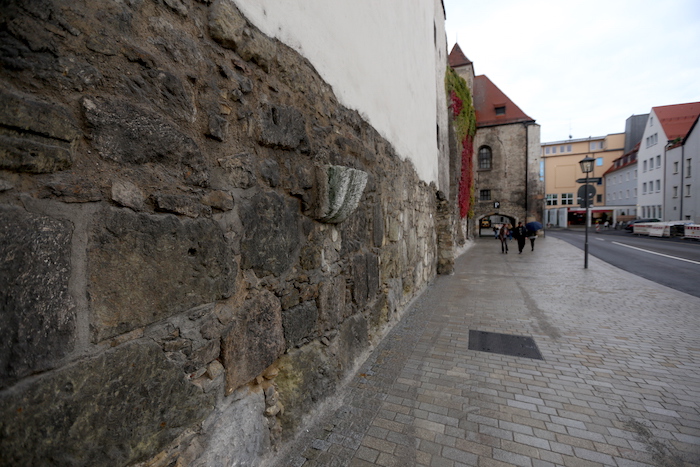 In 179 Marcus Aurelius built the Roman rectangular fortified town of Castra Regina for the Legio III Italica and the town quickly became an important location at the most northerly part of the Danube.  This fortified town is roughly the area now known as the Old City or Altstadt. 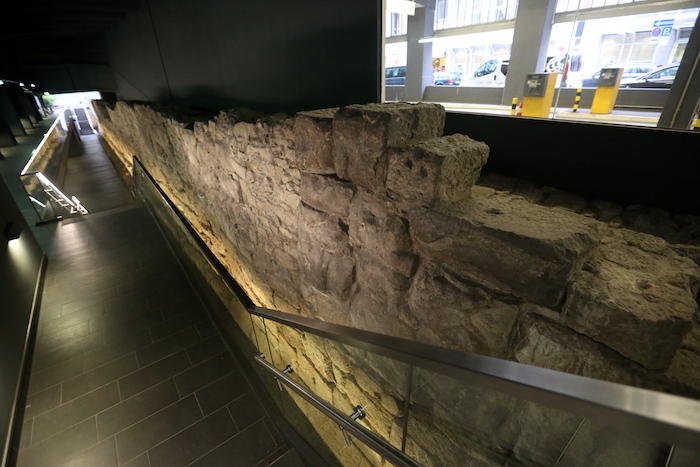 Many parts of the Roman walls and buildings can be spotted around the city and incorporated into more modern buildings.  The East Tower of the Porta Praetoria is an example that can still be seen – this was part of the entrance to the legionary camp where there were two massive towers. 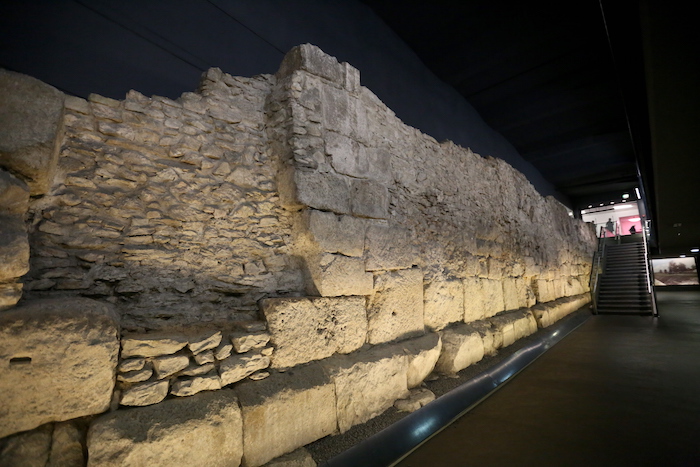 Porta Praetoria was the north facing gate and was discovered in 1885 during renovation work.  In fact, the arches had served as a city gate right up until the 17th century.  This and the Porta Nigra, the northern city gate, are the only two remaining Roman gates north of the Alps. 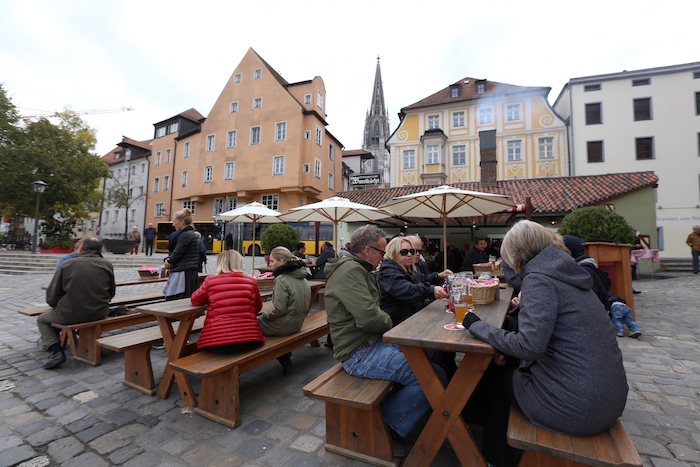 Regensburg has another claim to fame that will interest food fans – it is the site one of the oldest continuously open public restaurants in the world.  The Historic Sausage Kitchen of Regensburg opened back in 1135AD when it was the ‘cookshop near the crane’ and served food to workers building the Regensburg stone bridge.  Later workers from the cathedral project came for their meals. 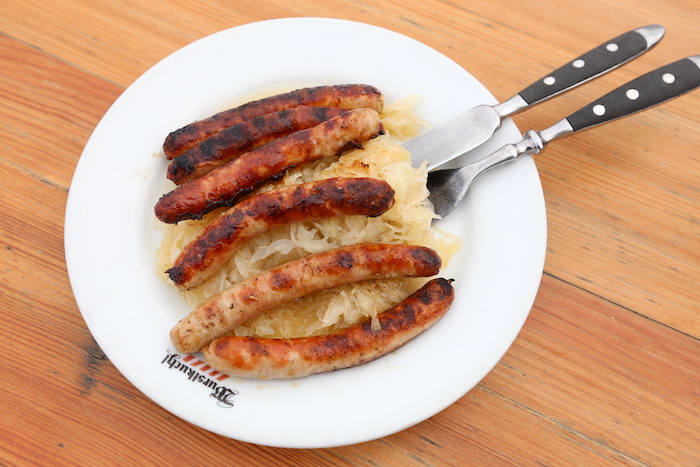 The current building dates from the 17th century but there is clear evidence for the previous restaurants on the spot.  Around 1800, it became known for its ‘gesottenes Flesich’ or boiled meat and in 1806, it began to specialize in sausages.  It opens daily from 8am to 7pm and serves around 6,000 sausages a day including regional specialties. 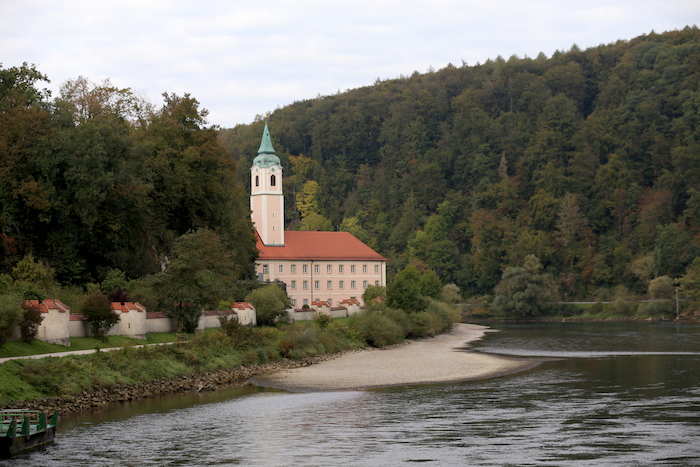 Because I had a little time to spare during the trip, I also managed to take a day trip to Weltenburg Abbey.  This is a Benedictine monastery near Weltenburg, sitting on the banks of the Danube.  The monastery was founded back in 620 and is said to be the oldest in Bavaria. 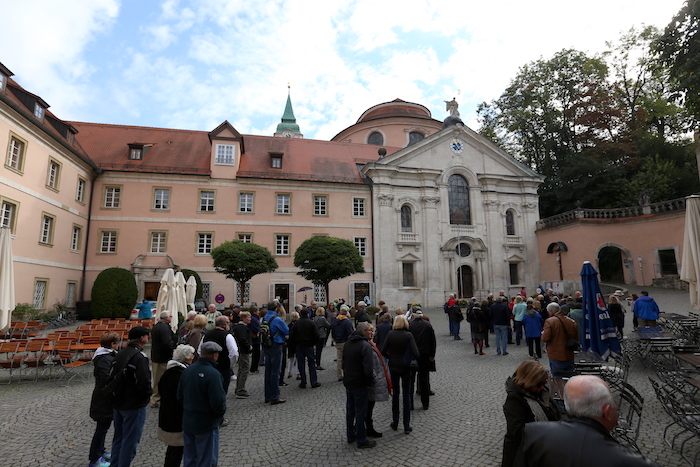 It was said to have been founded by Agilus and Eustace of Luxueil, students of Columbanus and became Benedictine in the early 8th century. The abbey has its own brewery, said to be one of the oldest monastic breweries in the world, operating since 1050 and there is now a restaurant on the site with amazing views across the river, offering a traditional Bavarian menu. 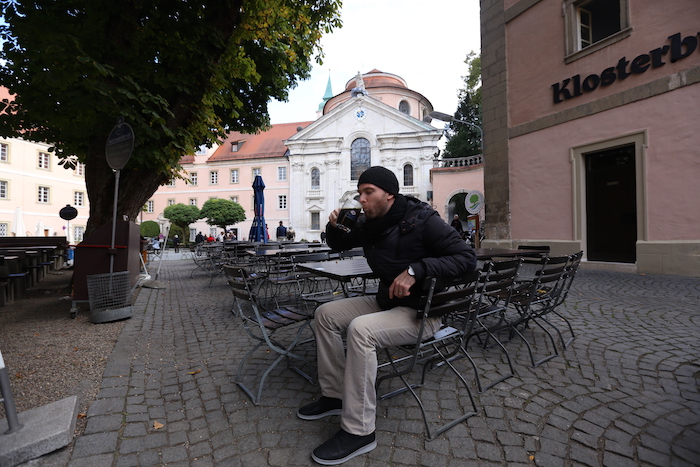 I visited Regensburg while on a Viking River Cruise from Bavaria to Budapest. All opinions are my own!

What did you think of the 5 must dos in Regensburg, Germany? Leave a comment below!

4 thoughts on “5 Must Dos in Regensburg, Germany”