As I stroll through Italian cities I often get lost in the architecture and the intangible atmosphere these ancient cities provide. I love immersing myself in Italian culture, but if you truly want to discover the heart of a culture then there is no better place to do this than in a museum. The Italian masters have immortalized centuries of history in paintings and sculptures for us to appreciate.

When you visit Italy you will want to take in as much as you can, but it’s impossible to visit every museum. That’s why it’s good to know what the most enchanting ones are, which hold the most impressive collections. So let’s find out what the six best museums in Italy are that are certainly worth visiting.

Florence is the birthplace of the Renaissance and home to some of the most important classical works in Italian history. Nowhere else can you find more about this than in the Uffizi Gallery in Florence, which is the most visited museum in Italy for a good reason. It takes you through Italian art from the late middle ages to the early Renaissance; a defining period for Italian culture. 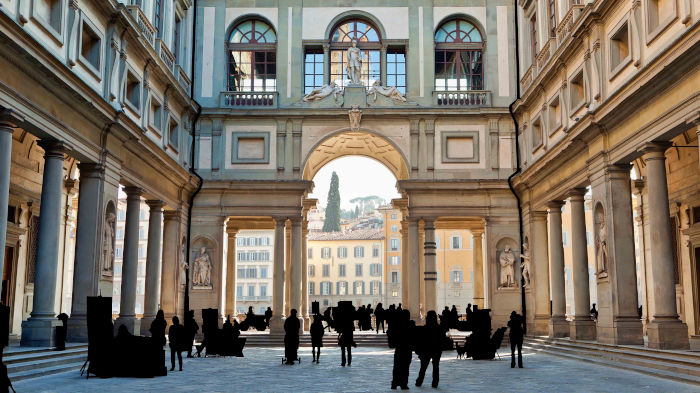 Famously known for its remarkable collection, featuring masterpieces such as the Annunciation from Leonardo da Vinci, Doni Tondo from Michelangelo and countless of works reenacting historical myths, the museum is bound to leave a lasting impression. Tasteful statues and busts from the famous House of Medici – a financial and political dynasty that ruled over Florence for centuries – embellish the museum’s hallways to complement its decor. Being home to Europe’s finest painters and sculptors the Uffizi Gallery is a must visit for any person visiting Italy.

The National Archaeological Museum of Naples

If you have an interest in the Greek and Roman antiquities then the National Archaeological Museum of Naples might be more up your alley. As one of Italy’s most important archeological museums it hosts numerous collections of ancient Roman remains from historic sites, such as Pompeii and Herculaneum, which got buried by the tragic eruption of Mount Vesuvius. Moreover, the museum also has the biggest collection of marble sculptures in Naples. 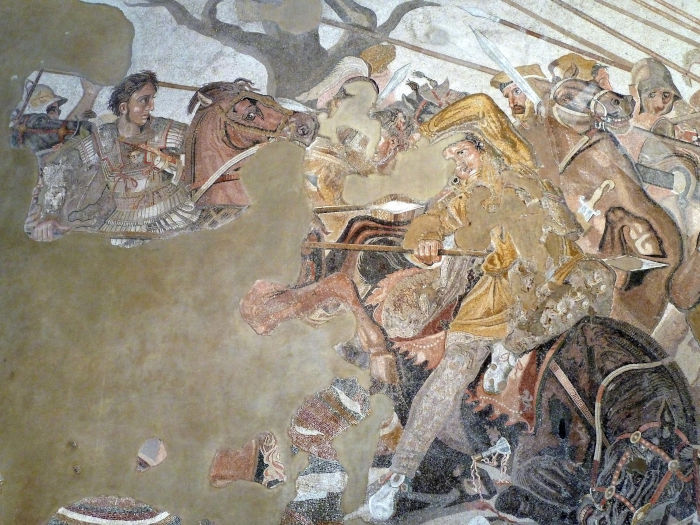 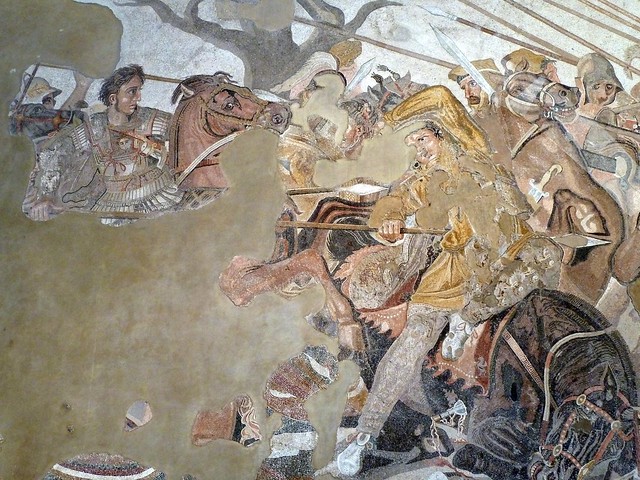 The museum offers a great insight into the lives of the old Romans, as it tells their tale through a multitude of paintings, statues and stunning mosaics. One of the highlights of the museum is the Farnese collection, which is a collection of Europe’s most exceptional larger than life sculptures from the antiquity, including the statue of Hercules, Atlas carrying the world on his shoulders, and the Farnese Bull, which is known as the largest recovered sculpture of that time. Another highlight is the collection of beautiful mosaics retelling the ancient Hellenistic stories of heroes such as Alexander the Great and Achilles.

If Indiana Jones went on vacation to Italy he’d probably end up in the Egyptian Museum of Turin. This museum is the prime destination in Italy for exploring one of the earliest civilizations mankind has ever known. Thanks to the museum’s extensive collection of Egyptian artifacts, you don’t have to travel to Cairo to learn more about Egypt’s rich history and culture. 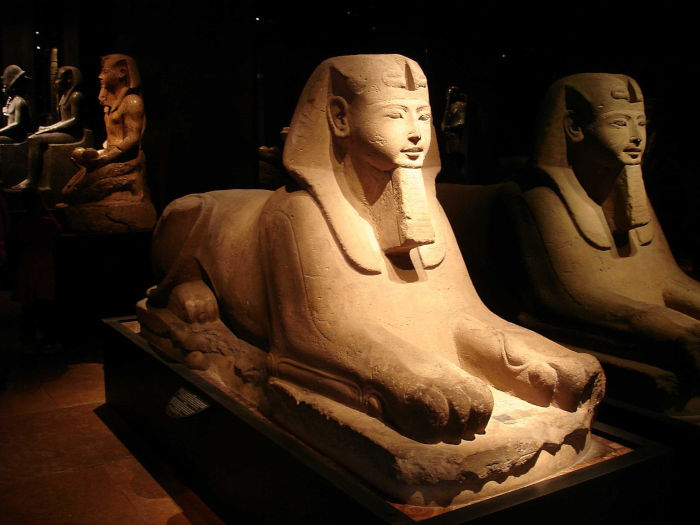 It is here that you will find the Book of the Dead, statues of pharaoh Ramesses the Great and Egyptian Gods awaiting your arrival, dozens of well-preserved mummies and golden sarcophagi, sphinxes and ancient papers with hieroglyphs and even an entire ancient temple where the Gods used to be worshipped. The museum boasts over tens of thousands Egyptian artifacts making it one of the biggest museums in Europe where people can view and learn about numerous Egyptian antiquities, guaranteeing a thrilling and educative time for the visitors of the museum.

With the Colosseum, the Pantheon and the Trevi Fountains Rome can almost be considered an outdoor museum by itself. But you’re not allowed to leave Rome until you’ve taken a day off to visit Vatican City, and by extend the Vatican Museums. The Vatican Museums contain a multitude of timeless treasures, with the most notable being the Sistine Chapel itself. It was here that Michelangelo painted the creation story on the ceiling and the day of judgement on the walls. 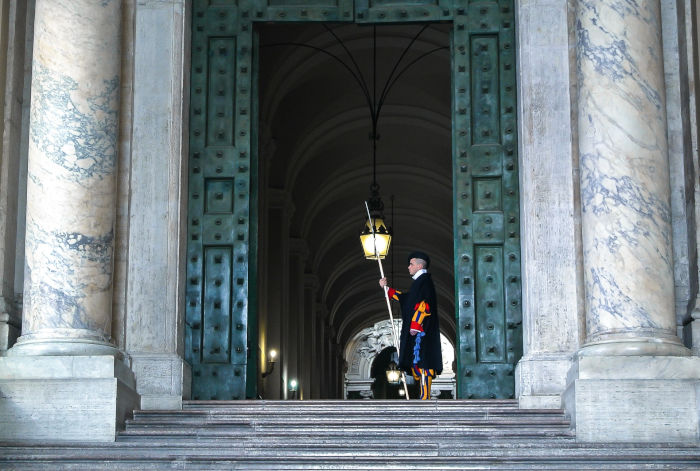 It’s not a short trip to the Sistine Chapel, as you first have to advance through numerous other art-filled galleries with elegant sculptures and frescos, with my favorite being the Raphael Rooms. Here you will find the School of Athens on the wall, where you see the classic philosophers such as Aristotle discuss logic, truth and virtue. While on the opposite wall you will find the Disputation of the Sacrament, a painting of heaven and earth, where Jesus sits on his throne and theologians ponder about religion.

With well over 20.000 works on display there is plenty to see and talk about in the Vatican Museums. I think it’s safe to say that over the years the catholic church has created a nice little art paradise for itself.

Milan is especially popular among tourists who are planning to do some fashion shopping. But in the heart of the city it only takes one wrong turn to end up in the Brera district, known for its boutique shops and art galleries. It is here, in the Brera Art Gallery, that you can find one of the best painting collections of Italy. The Brera Art Academy originally started collecting famous paintings, covering the 14th century and on, to teach students about the history of the art form. But over the years the art collection of the academy became increasingly notorious as more and more masterpieces were added to it. 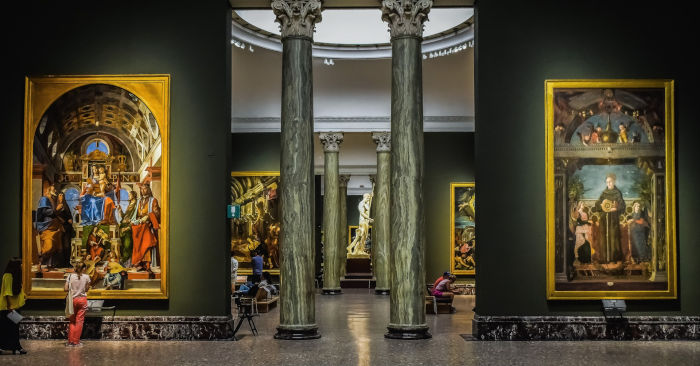 As is common in Italian paintings most works display a scene and tell a story from the Christian tradition, such as in the macabre masterpieces ‘Finding of the body of St Mark’ by Tintoretto and ‘The Dead Christ’ by Mantegna. Although universal themes are covered as well, such as in ‘The Kiss’ by Francesco Hayez. It’s a beautiful collection and it’s certainly recommended to take a guided tour through the museum, so you get to find out more about the story behind each work.

Venice, the city of isles and romantic canals, has long been the richest city in the world due to their expansive trade empire. And they certainly aren’t afraid to show it. On the San Marco Square you will find the gothic Doge’s Palace. This imposing monument used to be the seat of power in the Venetian Republic. 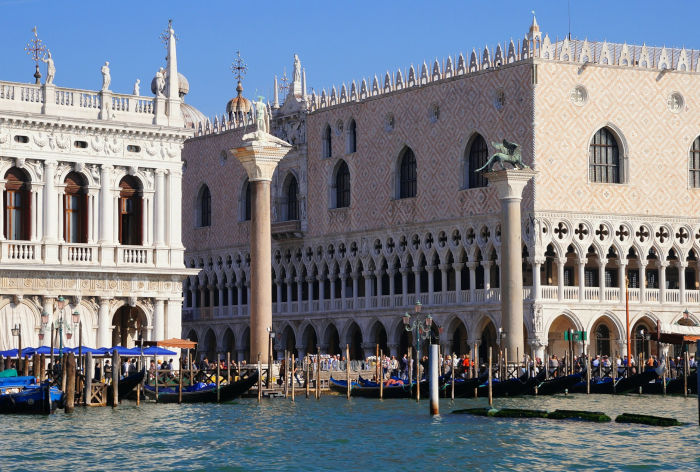 Entering this piece of history you’ll quickly find this isn’t a regular museum, as you get sent to a different place and time by everything around you. From prestigious architecture throughout, man sized terrestrial globes to chart your maritime expeditions from, stunning views over the sea, paintings with golden frames covering the ceilings and old dungeons where prisoners would waste away. It certainly something you will remember once you come back home.

Author bio: I am an avid traveler from Amsterdam that loves to write travel blogs and city guides at meetthecities.com. Spending most of my time abroad random strangers constantly ask me for directions, which inspired me to write several city guides to show people around town. I quickly found myself blogging as well to show people the hidden gems that can be found across the world.