My first day in Kerala, India was already shaping up to be the start of an epic adventure through the state. After enjoying some incredible food, visiting a market, and getting an outstanding haircut, shave, and massage, I headed out to get some lunch! Come along with me to a restaurant serving all you can eat Indian vegetarian food in Kerala, including a banana leaf sadhya for only $2.78 in Trivandrum, India!

For lunch, my boy Vishnu took me to an incredible spot called Mothers Veg Plaza in the capital city, Trivandrum. There, we’d be eating a dish called sadhya, which is a huge feast served on a banana leaf. It can include up to 30 different types of curries, which you eat with rice, bread, desserts, and more! It’s similar to a thali, but not quite. This Indian vegetarian food feast in Kerala is so massive, it would take us almost 30 minutes to eat it! I couldn’t wait to dive in! 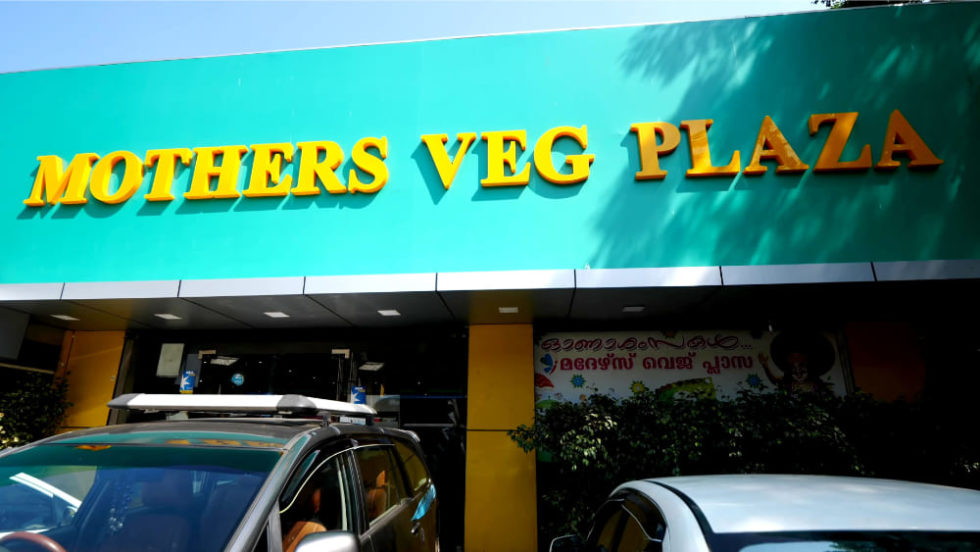 Mothers Veg Plaza is the only place that serves sadhya 365 days a year and it’s super popular, so I expected it to be packed. Together, it only cost us 441 rupees, so about 220 rupees each, which translates to less than $3 USD! 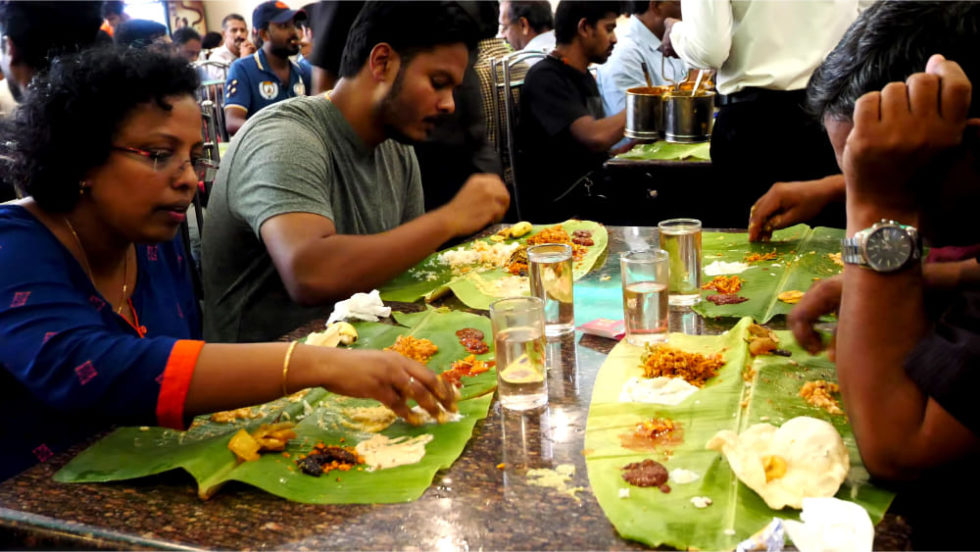 The restaurant was super packed and there was no queue. Basically, you wait around near the tables as people eat, and then you have to jump on it as people get up to leave. It’s the only way to get a seat! It’s pretty crazy!

While we waited, I took a look around at everyone eating. The food looked so incredible, especially the chutneys, bread, and rice. Finally, we got a table and our banana leaves. You wash them off and dry them before you’re served. They say the leaf enhances the flavor of the food! It also makes eating Indian vegetarian food in Kerala a really memorable experience! 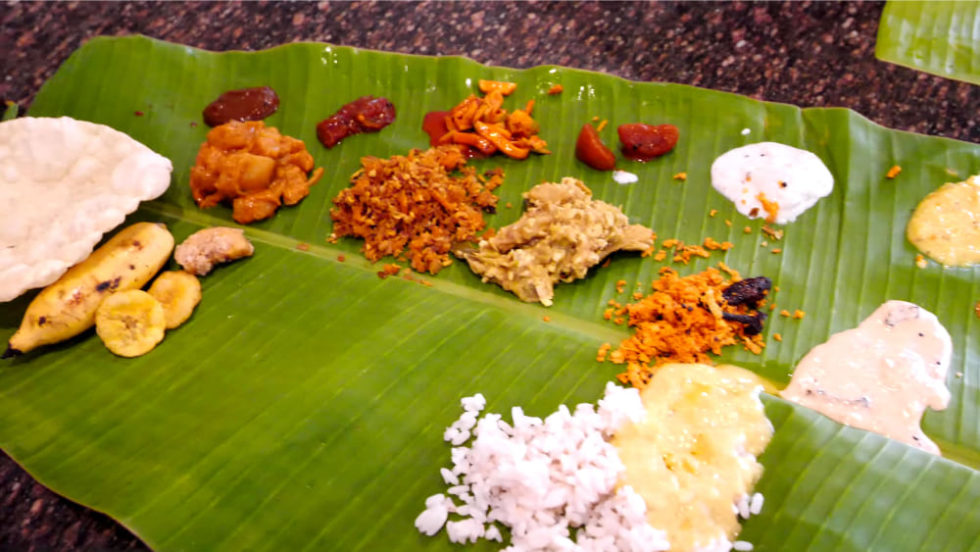 We were served a bunch of different dishes, including a large mound of rice, papadum, ginger pickle, mango, gooseberry, pineapple chutney, bitter gourd chutney, banana chips, and much more. 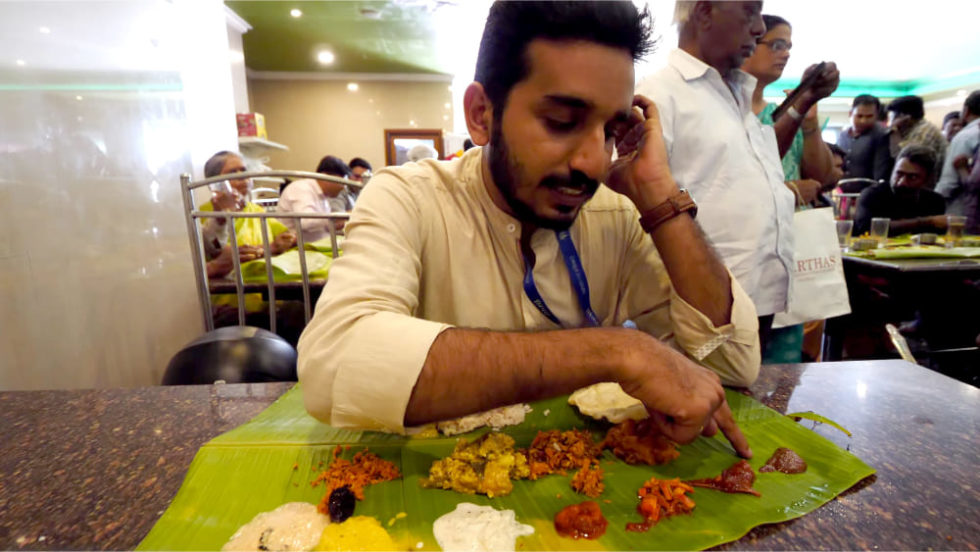 I started with the banana chips, which were like a sugar bomb and full of banana flavor. It was crunchy, airy, and salty! Then, Vishnu showed me how to eat everything. I love eating with my hands! I took the papadum and mixed it into the rice and dal. The dal was light and the papadum gave it a light and airy crunch. Then, I went for the gooseberry, which blew my mind, followed by a crazy good pickled lime that was really zesty. They weren’t crazy spicy, but they were still really good! 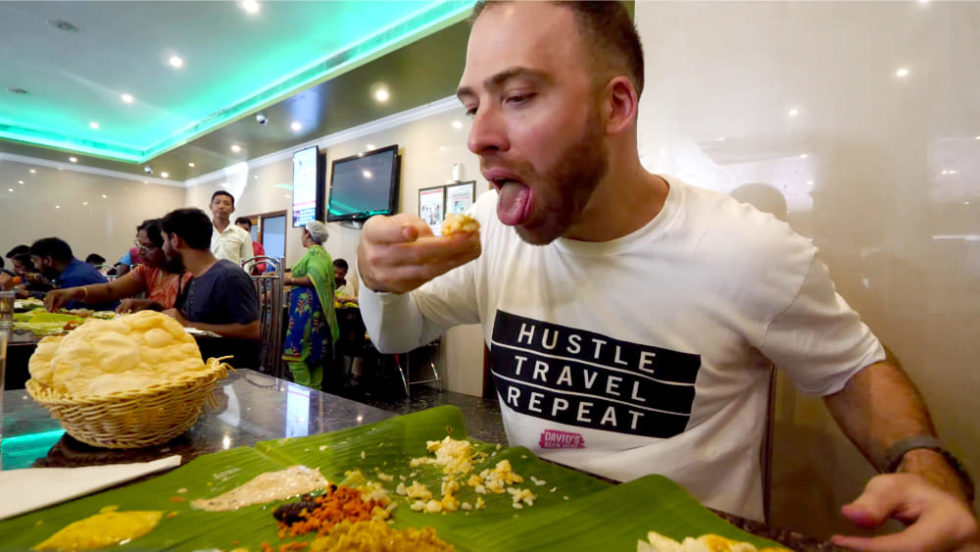 Then, Vishnu told me there are no rules as far as what you can mix together, but he gave me some suggestions. I mixed some mango with the rice, and then some cucumber and rice. It was fun food! Then, I tried some phenomenal pineapple by itself and then with the rice. It was too good!

Then, I nearly ate a chili by itself but Vishnu stopped me! So I took a chili and mixed it with the rice and pineapple. It was salt and wasn’t really hot, but I liked it. It was the saltiest pepper I’ve ever had in my life! Then, they gave me more rice for some sambar. The one thing is, you want to keep your banana leaf still looking nice, so you shouldn’t mix everything together. 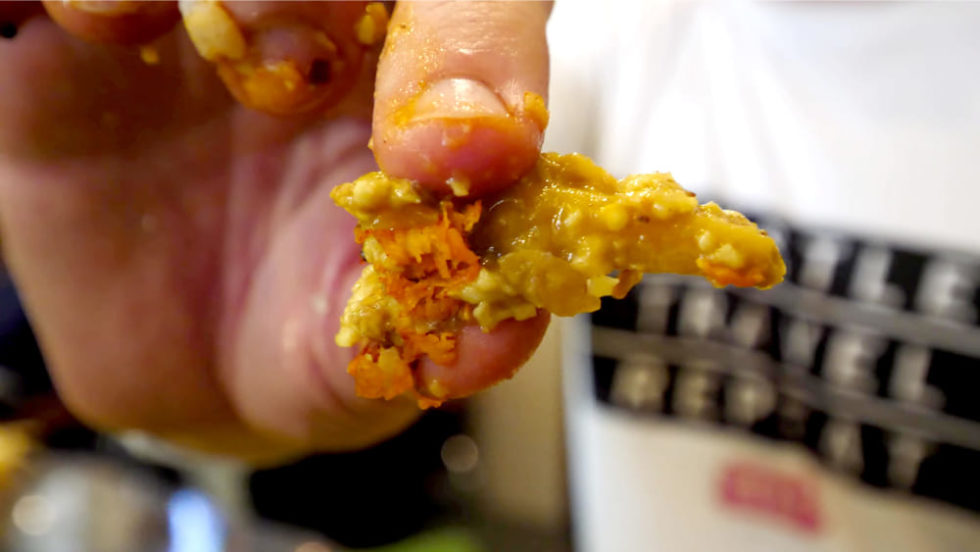 They poured the sambar right over the rice and I dug right in. I mixed in some banana at first and then added more things in. It was a super flavor bomb! The combination was super delicious. It was tangy, zesty, and fruity! The pineapple in it was unreal! It was khichdi, which is different from a chutney, but it was so phenomenal. I never knew Indian vegetarian food in Kerala was so mouthwateringly good! 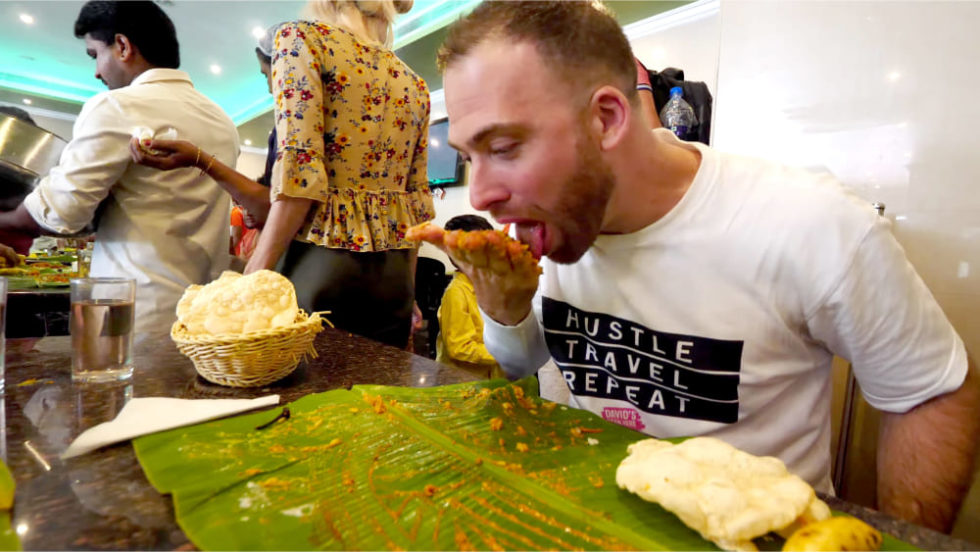 Then, I moved everything to one side of the leaf and then continued digging in. It was so incredible! They brought us another dish, and Vishnu told me we were about halfway through the meal. It was so much, and the experience was amazing. I’m all about eating with my hands. 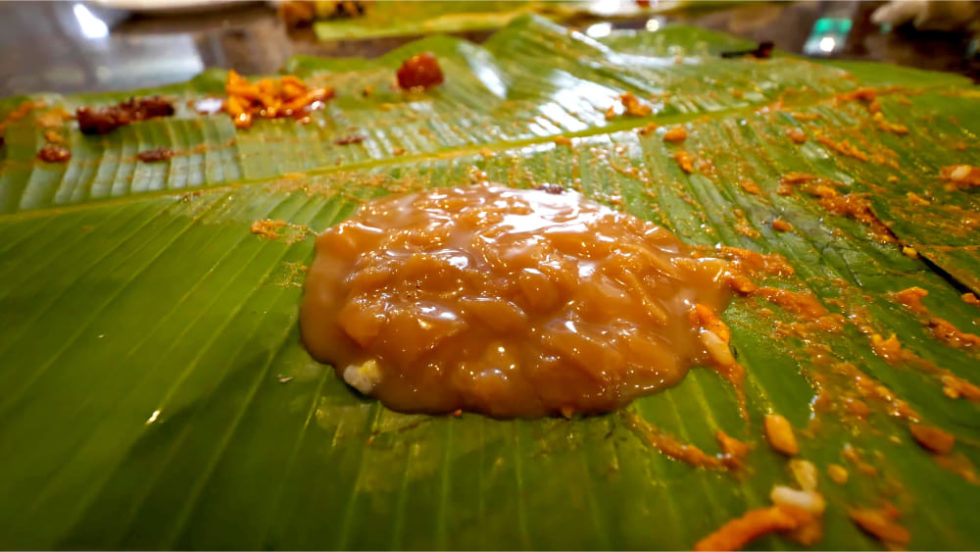 After that, I crunched into some papadum and continued moving all of the remnants of the other dishes to one side of the leaf to make room for the desserts that were coming. They gave us banana with payasam, which you mash up together. It also contains ghee and jaggery, and then you mix the crushed papadum in it.

Check out the Top 10 Things to See and Do in Bengaluru, India

The banana with the payasam was so sweet. I loved the contrast of the dense banana with the hot, sweet payasam with cinnamon-like jaggery. The crushed papadum mixed in was unreal and added an new layer of texture. This was one amazing dessert! 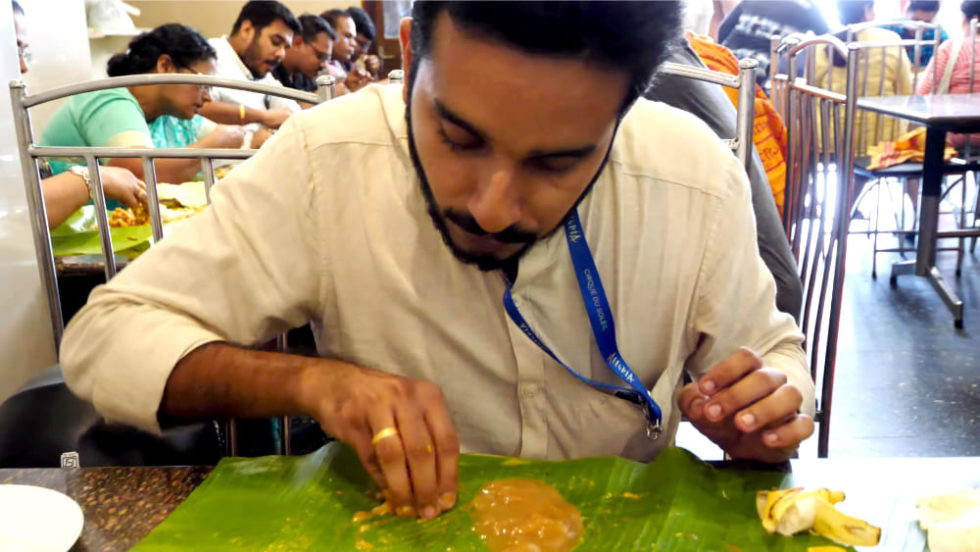 Then, we got another payasam! This one was lentil-based, and you mix the banana with it as well. It was like a super sweet syrup! I crushed more papadum up and let it absorb it. What an unbelievable combination! It was almost like banana pudding. It was the best one so far! 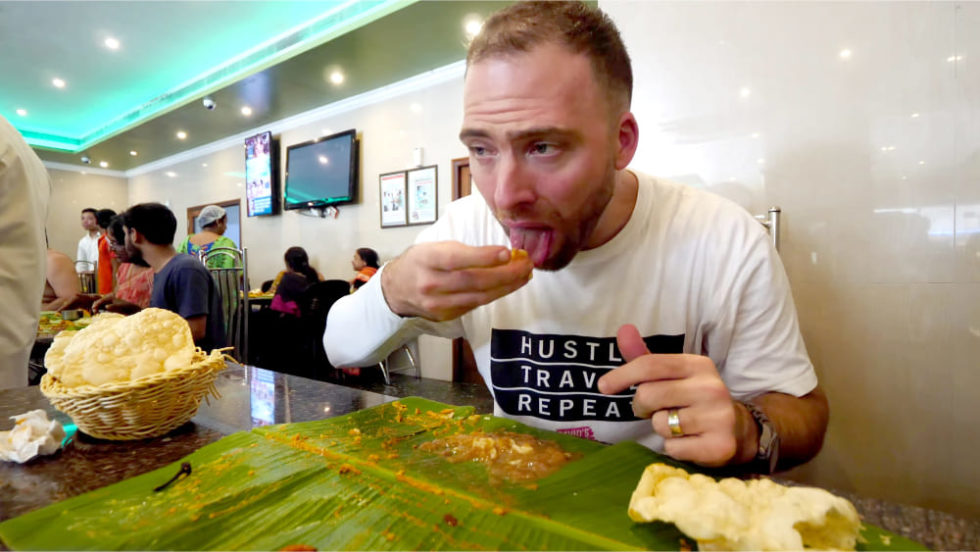 Next was the third payasam, which you don’t mix with anything. It felt like rice pudding. It was really sweet! Then, we got a sweet chapati, which you smash into the third payasam. I tried a tiny piece by itself, which was a little sweet and different. 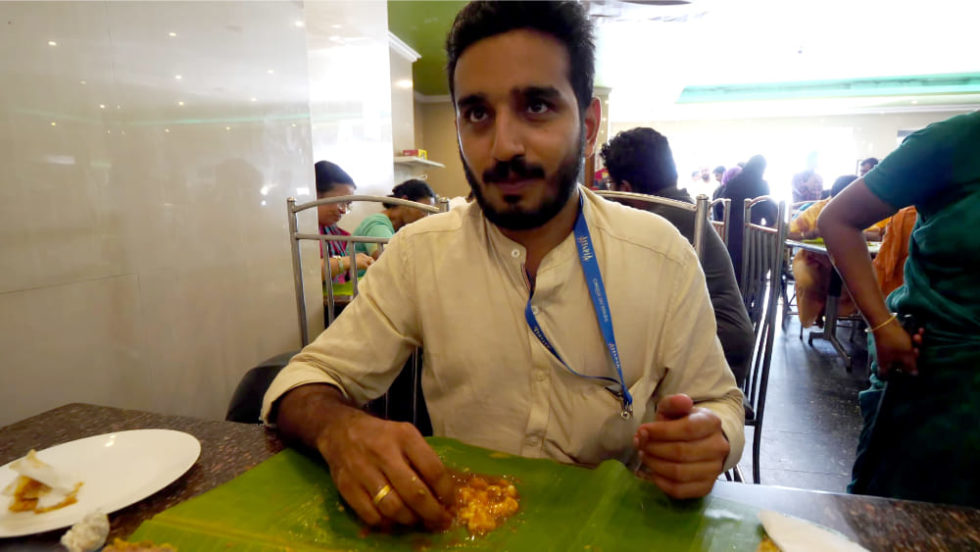 Then, I tried it with the payasam, which contained vermicelli noodles. It was harder to break it down and mix it up with my hands, but it was worth it. It was such a sweet and delicious dessert. I loved the vermicelli noodles in it! With the sweet chapati, it was almost like a really nice, thick pudding. 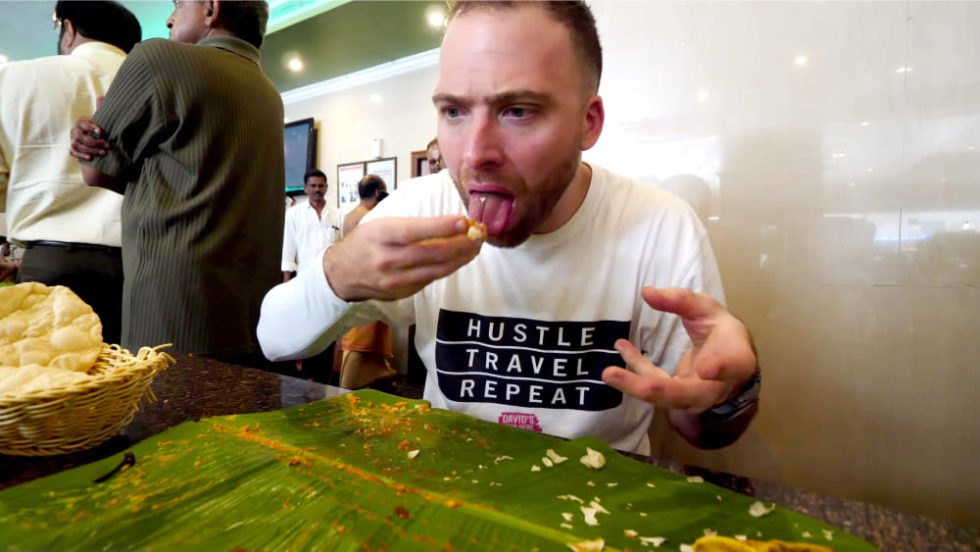 Then, I cleaned my leaf for the next course of rice. We’d have a curd-based curry with it, which helps with digestion. The curd contained pineapple and absolutely blew me away. It was extremely tangy and tasty. This Indian vegetarian food in Kerala is some of the best Indian food I’d ever had!

Check out the Top 10 Things to See and Do in Hyderabad, India

Then, I mixed a tomato-based sambar-like dish with my finger and tried some right out of my hands. I did the same with the next, curd-based one one and then poured them both into the rice. It’s an Indian digestive! I loved them, especially when I added some pickles. Then, I mixed the two and tried them. 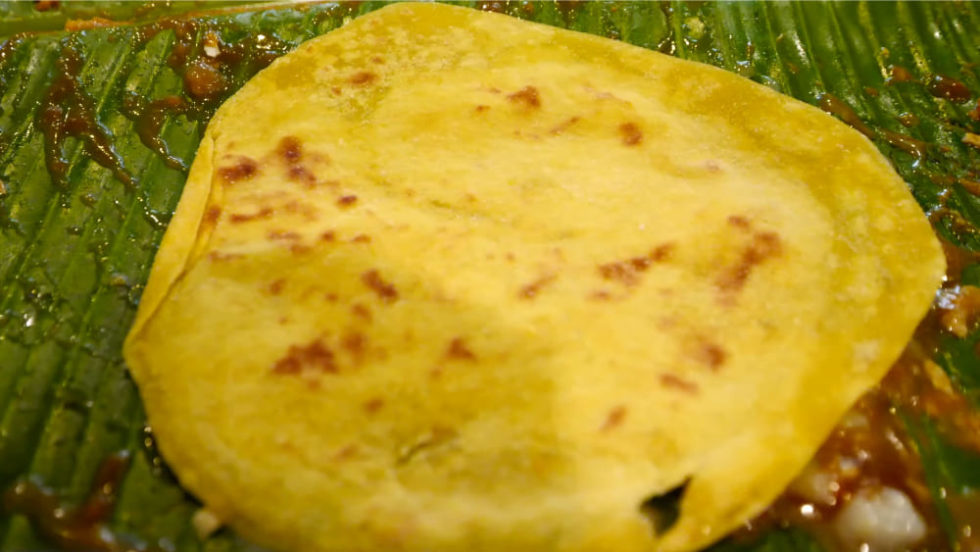 Finally, I finished my meal with ginger. Then, you close up your leaf by folding it away from you and your waitress comes and picks it up. Afterward, I met an awesome fan from Chennai. 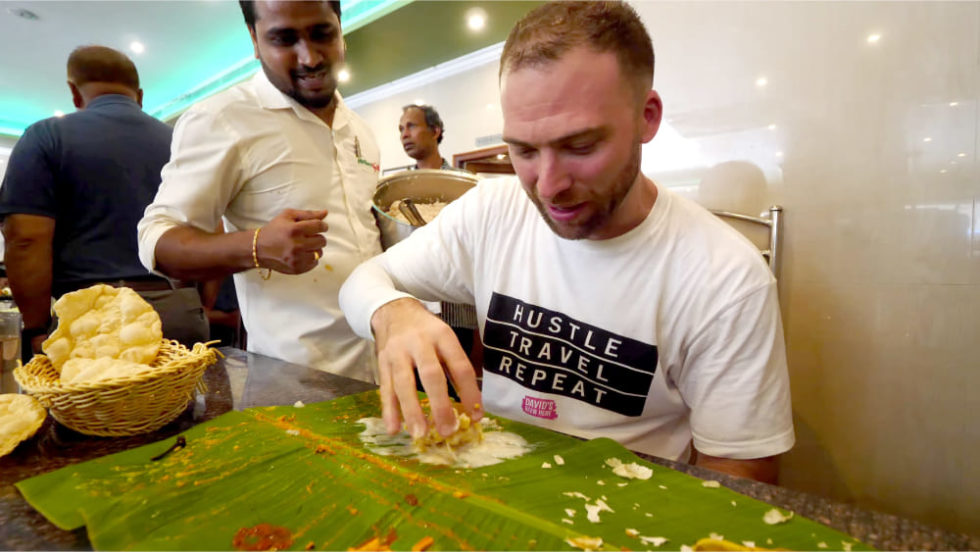 Wow! What an incredible all you can eat Indian vegetarian food experience in Trivandrum, India! Trying all those dishes is something I will remember for the rest of my life. There were so many flavors, from sweetness, bitterness, tanginess, and more. My stomach was so full! 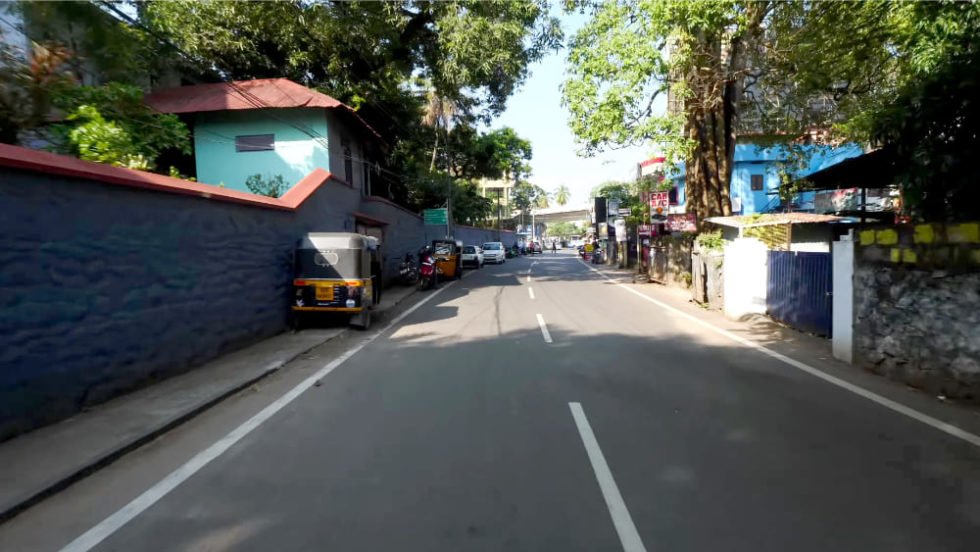 From there, Vishnu and I hopped on his bike and headed toward the beach, where we’d go to see a palace. I wore a helmet, as it’s now a law in Kerala that everyone has to wear one on a motorcycle. The streets of India are a wild place and there aren’t really any traffic laws, so you have to be a magician on your bike to get around!

Then, we arrived at Napier Museum and gardens. The museum is famous and used to be a palace. It reminded me of a big mansion inside a park. It’s surrounded by gardens and it was nice and breezy. 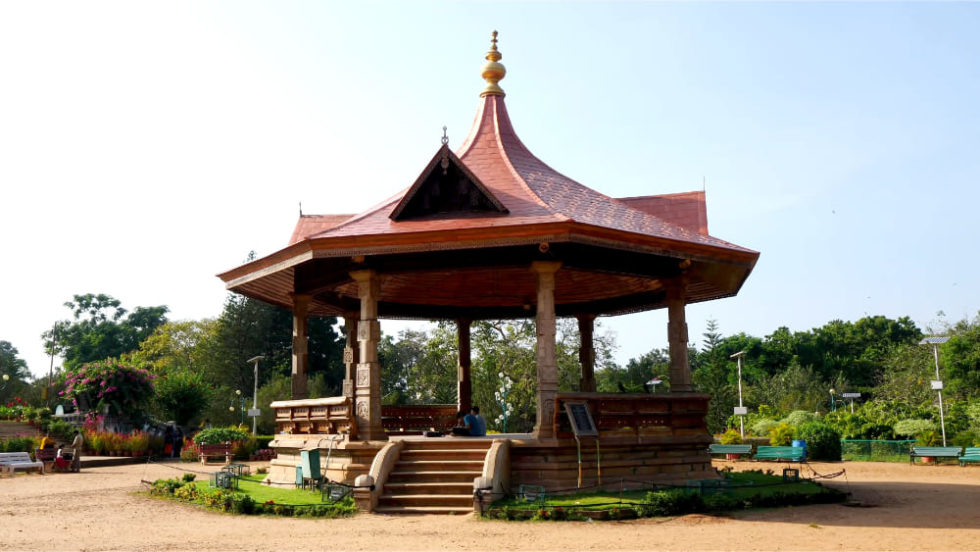 What an afternoon! I have to thank my friend Vishnu for taking the time to show me around his amazing hometown of Trivandrum. Be sure to follow him on Instagram to see even more of this incredible city! 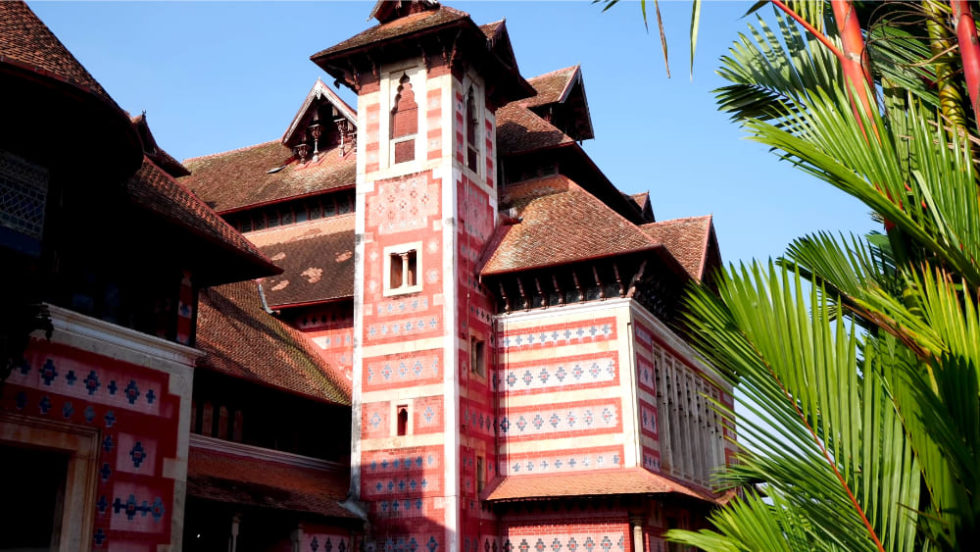 I hope you enjoyed coming with me to have all you can eat Indian vegetarian food in Kerala, India! If you did, please give this video a thumbs up and leave a comment below. Also, please subscribe to my YouTube channel and click the notification bell so you don’t miss any of my travel/food adventures!