After an exhilarating and mouthwatering first day in Kerala, India, I was ready for day two! Come along with me and my boy Vishnu as we take a day trip from Trivandrum to enjoy an authentic Kerala breakfast of pazhamkanji before we head off to the Jatayu Rock Sculpture in Kilimanoor, India!

My day started by driving north from Trivandrum to the small town of Kilimanoor, which is roughly 20 miles northwest of the capital. Along the way, Vishnu and I stopped at R.B. Tea Stall to have some chai and to try a dish Vishnu’s wife made for me! They pour the milk in a glass and then add black tea. Then, they pour it back and forth between containers, at distances of up to one meter, to make it nice and frothy. It’s a spectacle for sure! 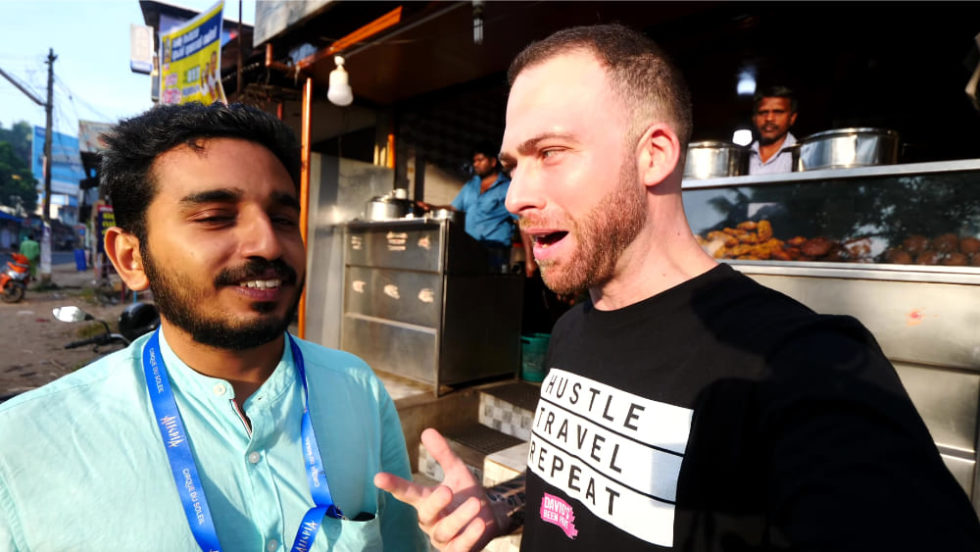 The chai was amazing! Then, I tried the dish Vishnu’s wife made, terali. It’s a steamed snack made of rice flour, jaggery, and sugar, and comes wrapped in a big bay leaf. The jaggery made really sweet! Then, I dipped it into the chai. I loved it! It was some of the best chai I’d ever had. The cinnamon and cardamom were so good! And it only costs 8 rupees/$0.11 USD each. It was so good that I had two glasses! 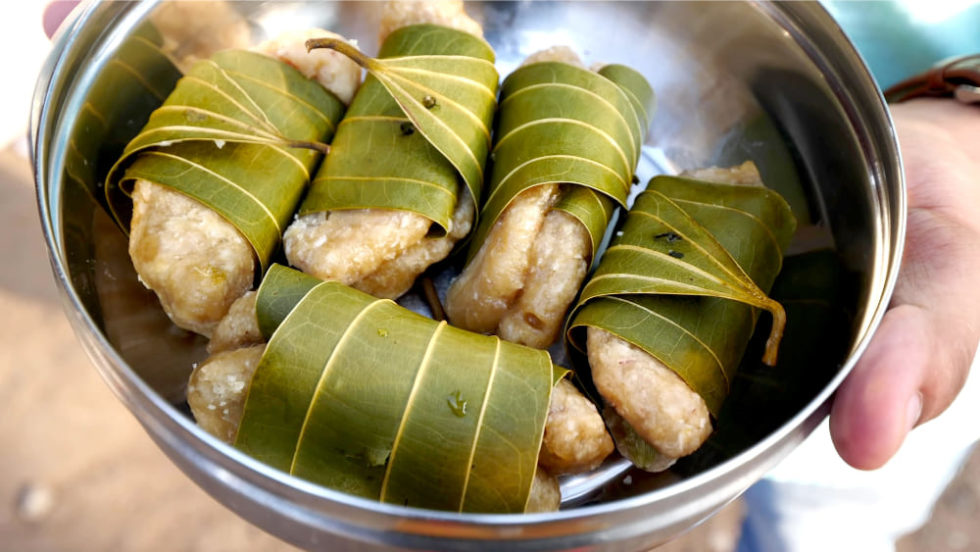 After the chai, we headed back out and continued our drive to Kilimanoor. We followed a highway that also leads to Kollam. This area is pure jungle and is so beautiful. There are coconut trees everywhere, as well as gardens, banana trees, and tea shops. There wasn’t much traffic because it was only 8 a.m. In Kilimanoor, we’d have the most authentic Kerala breakfast of pazhamkanji and visit the Jatayu Rock Sculpture, a famous rock sculpture in India.

We arrived in Kilimanoor, where I could see lots of three-story buildings with retail on the bottom, commercial space, clothing and book vendors, food, and more. There’s only one main street that goes through it. 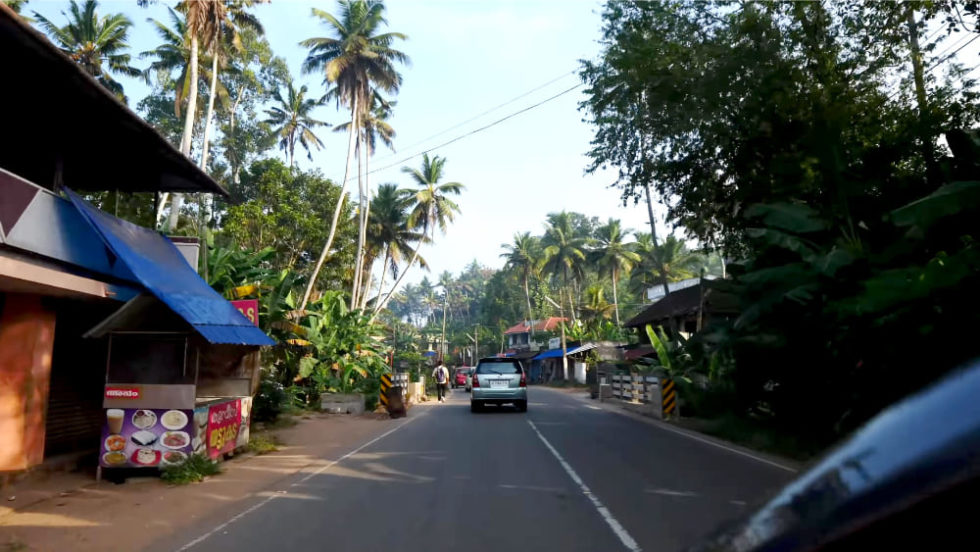 After getting lost for a bit, we found the Janarthana Hotel in a village called Chadayamangalam. I was starving, so I couldn’t wait to eat! 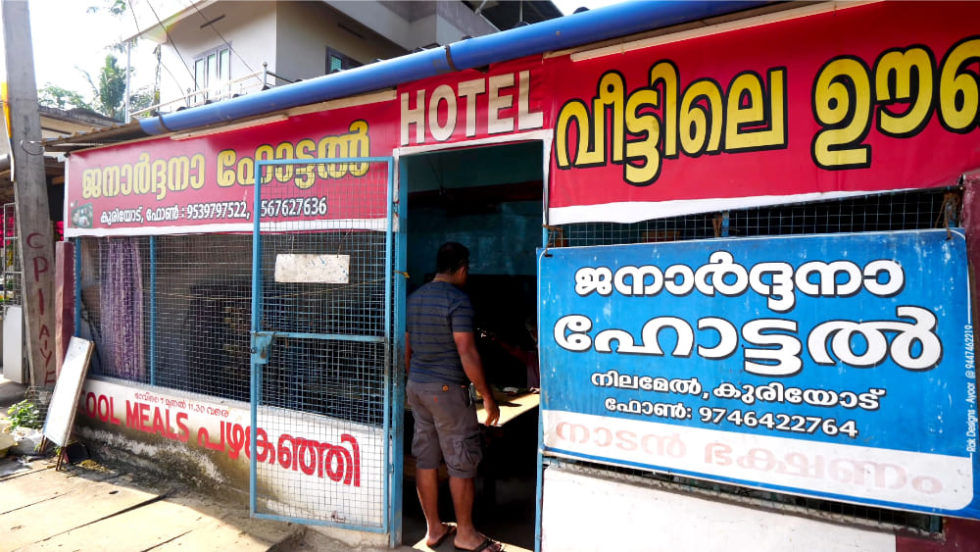 There, we started our authentic Kerala breakfast with pazhamkanji, the most traditional food you can eat in this part of India. It’s a fermented rice gruel that’s made from leftover rice from the night before.  It is mixed with mashed cassava, curd, gooseberry pickle, bird’s eye chili, onion, and coconut chutney. It’s a dish people mostly only ate in their homes for breakfast, but then they brought it to restaurants after thinking it wouldn’t do well because of how messy it is. But it wound up doing very well! 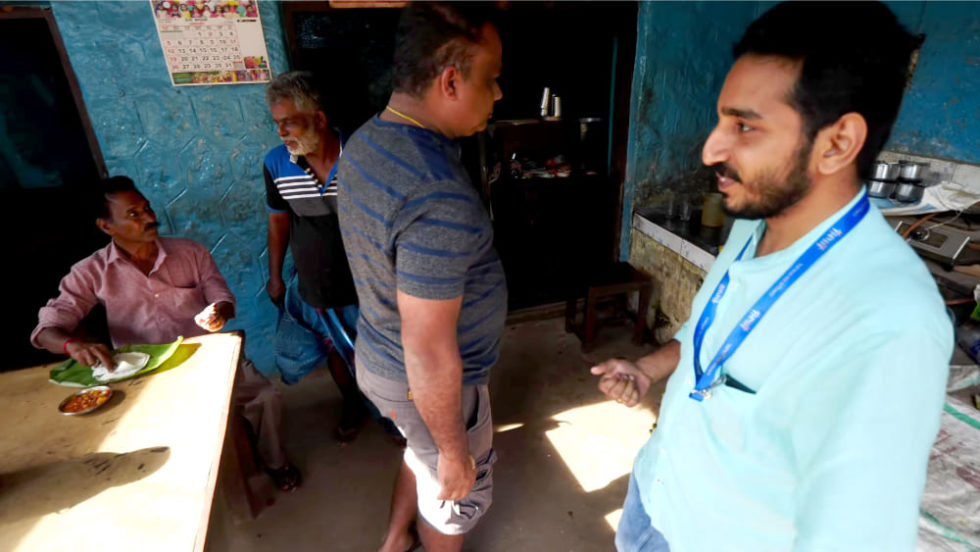 You can also eat it with fish curry or fish fry. You mix it all up with your hands really well and then dig in. Then, you add some fish curry. Both dishes together only cost 60 rupees/$0.79 USD! 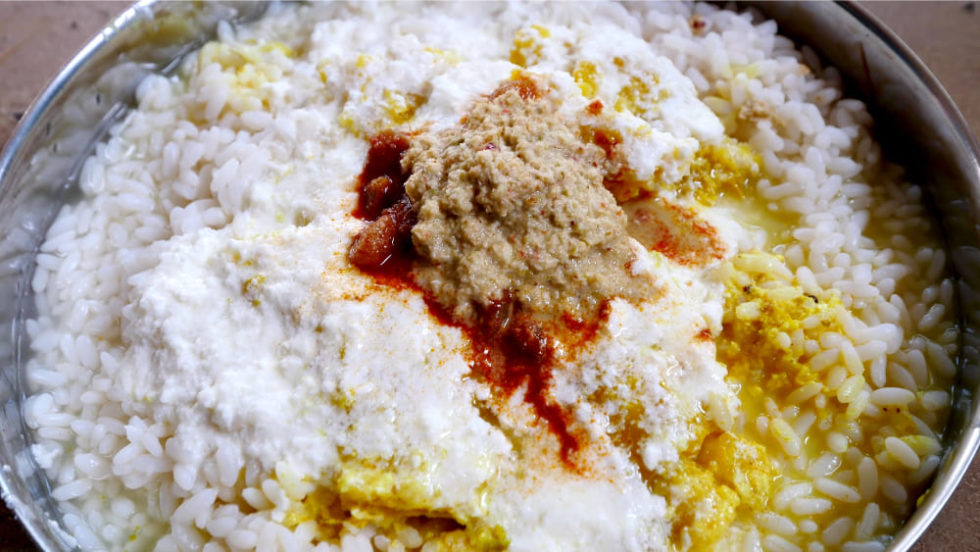 I dug right in with my hands. It was nice and cold. It was really incredible just to mix it with my hand like that! I kept going until everything was mashed together. It blew my mind! The rice was unreal and the combination was nice and spicy. The cassava was fantastic! 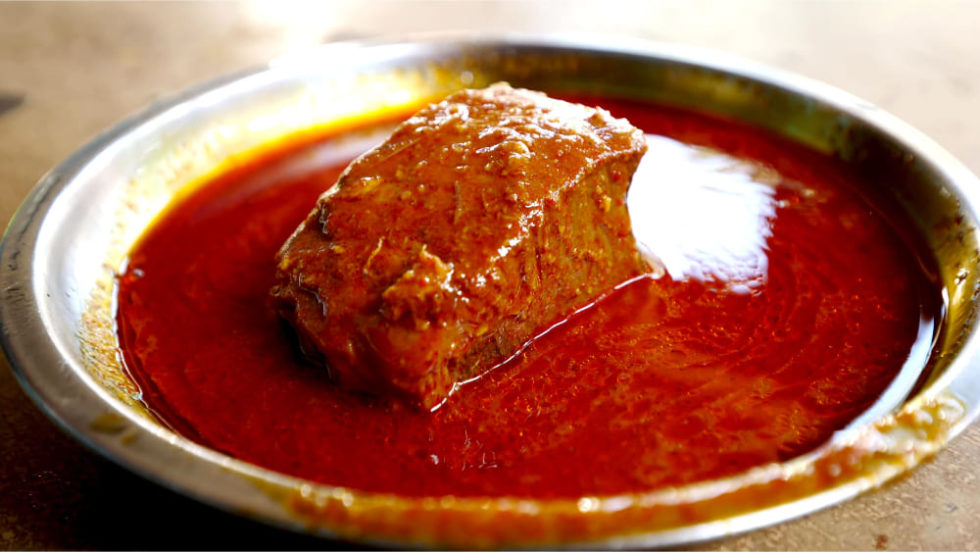 The pazhamkanji is usually served with chilies, but since we were late getting there, they only had one left. I took it and crushed it into the pazhamkanji. It’s one of the spiciest chilies I’ve ever had in India! Then, I added some local chicken curry. The gravy was unbelievable! The chicken was so fresh and tasty! I love the chicken in India! It’s farm-to-table, so it’s always fresh! But like the fish, you should be very careful because it contains lots of small bones. 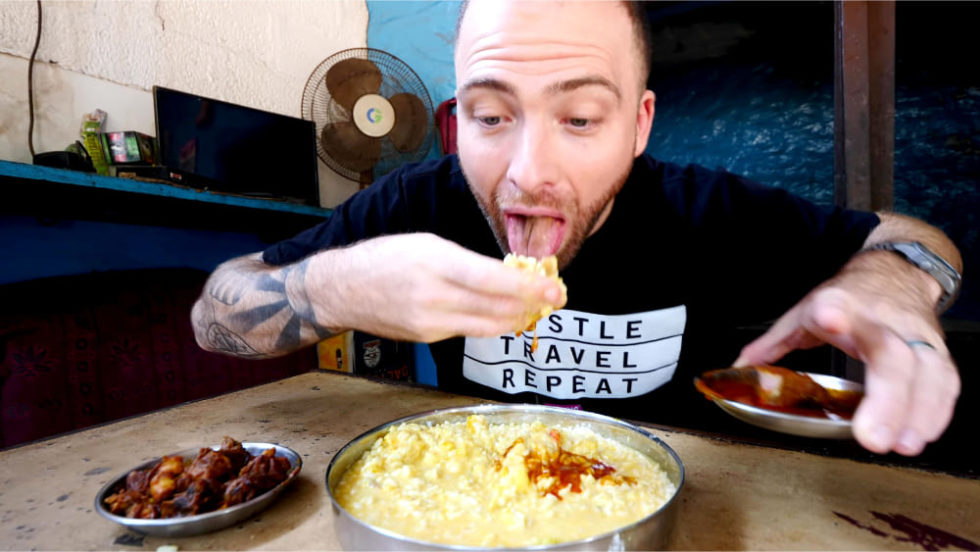 There were so many amazing flavor and texture combinations in this dish. The contrast was outstanding. The fermented rice grains were so unique! I added some curd, which really tempered the heat from the chili. Finally, I added some of the gravy from the chicken curry. I mixed it up well with my hand and tried it. The combination of sour, salty, and spicy blew my mind! Then, I added some sea salt to give an extra bit of saltiness. 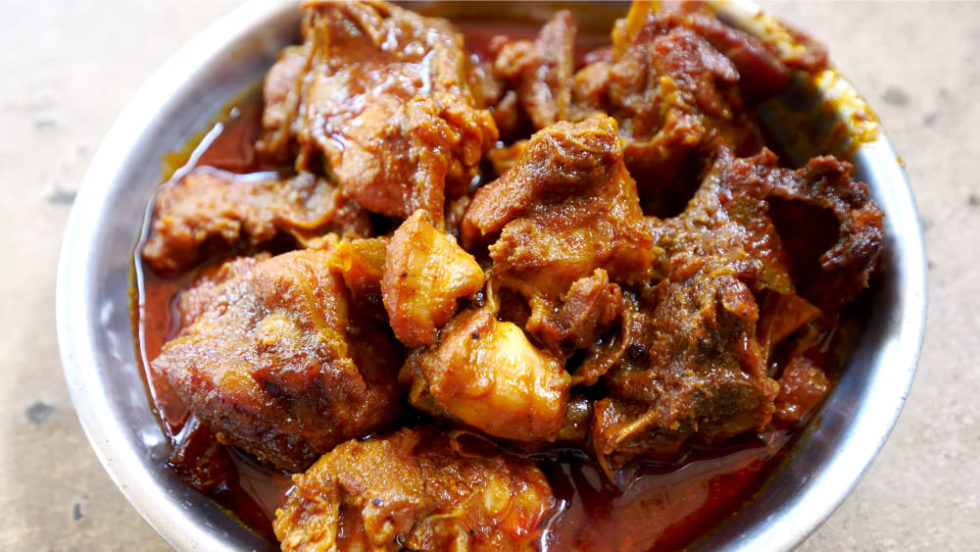 After my meal, I rinsed my hands and washed them with soap and water. Then, full from my authentic Kerala breakfast of pazhamkanji, we headed back out and made our way to Jatayu Earth’s Center, a nature park and tourism center in India that contains an adventure park, a museum, and a cave resort. But it’s most famous for its massive statue of the divine bird Jatayu. The concrete statue is a whopping 200 feet long, 150 feet wide, 70 feet tall, and takes up 15,000 square feet of space! 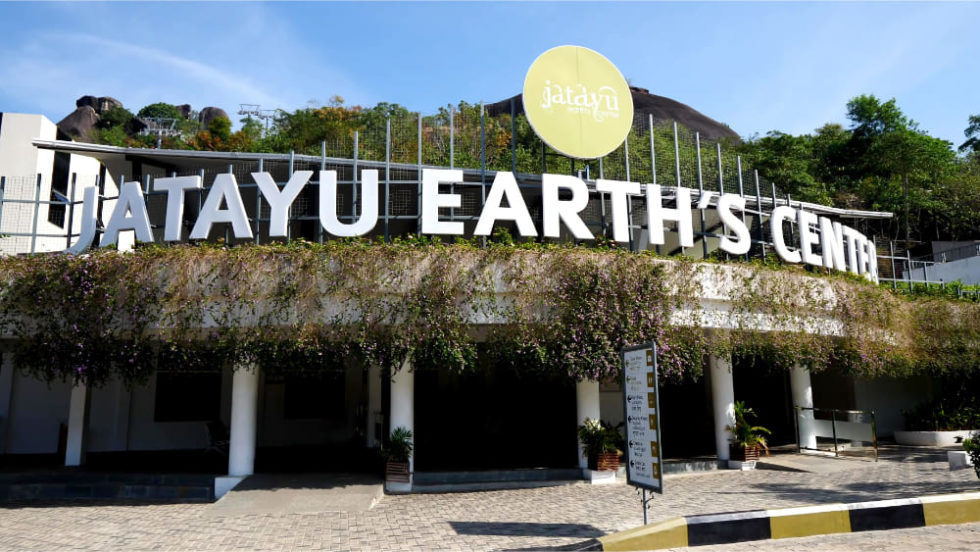 We stopped in a waiting area that has a café and seats, where you wait for the cable car. We took the cable car up. I love riding in them. I’d done it before many times in places like South Korea and Venezuela. As we took the 5-10 minute ride to the statue, I could see lots of boulders and vegetation below us, and the helipad. The statue is over 1,000 meters (3,280 feet) above sea level! 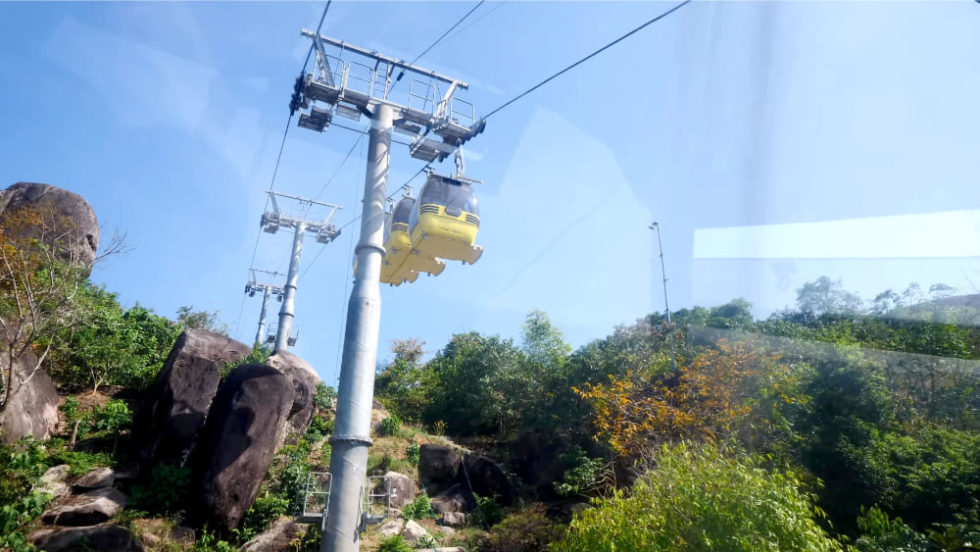 The statue of Jatayu is the largest bird sculpture in the world! We arrived at the statue, which is a beast! There was a dry, hot wind blowing up there. From the top, I had unparalleled views over Kerala. It was absolutely stunning! Trust me, when you go to Kerala, you must have some pazhamkanji and then visit the Jatayu sculpture near Kilimanoor, India. 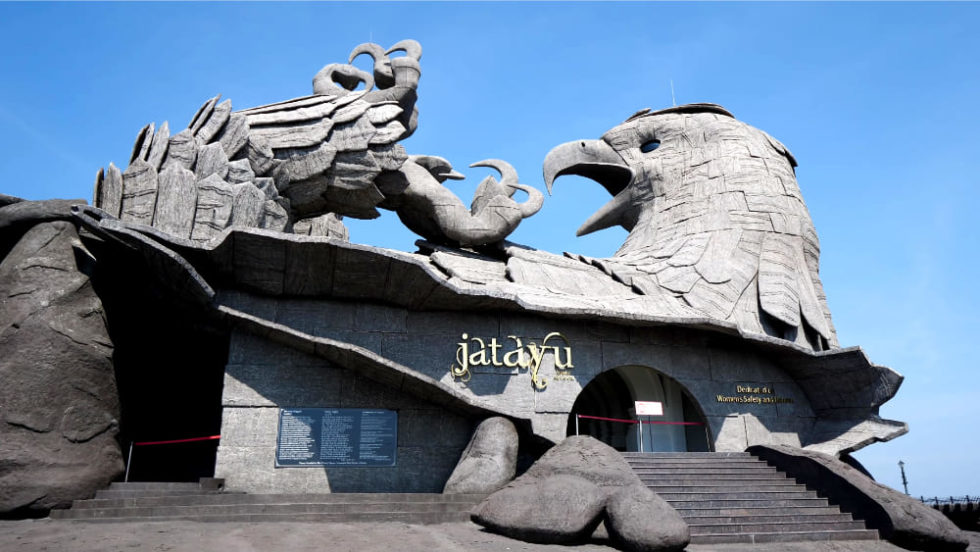 The Jatayu statue symbolizes the protection of women. It was designed and sculpted by a sculptor named Rajiv Anchal. When you get to the statue, I suggest taking a walk around the grounds and going to the amphitheatre, where you get beautiful views over Kerala and of the bird statue itself. There, you can see a spot that, according to legend, is the holy footprint of Lord Rama! There’s also a temple dedicated to him nearby.

Vishnu and I got exclusive access to go inside the bird statue and see the view from its eyeball. It was incredible! It was literally a bird’s-eye view! They were so gorgeous, and I could see the claws and the wings so well! It was amazing! 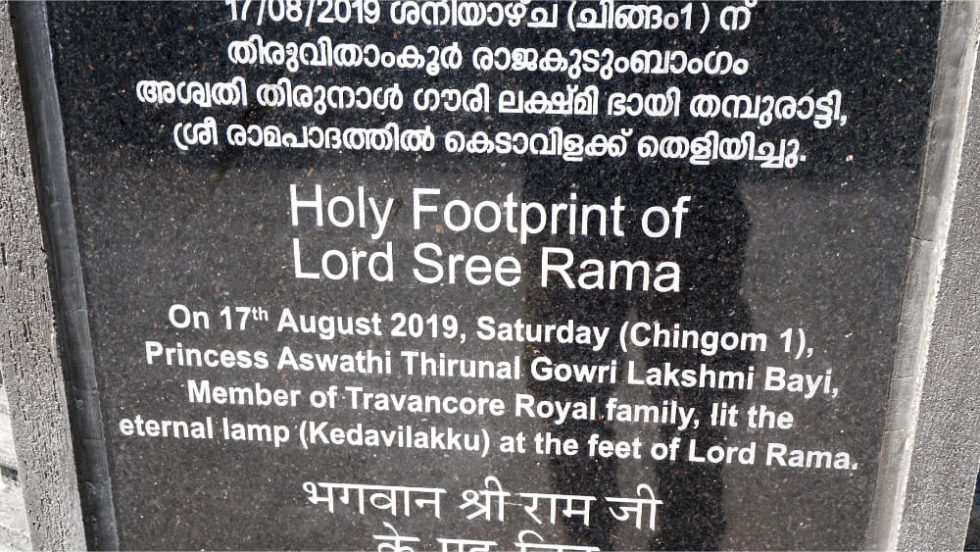 Then, we walked the 826 steps down to the bottom. I wanted to experience it because the sun was out, the wind was blowing, and we were surrounded by beautiful nature. I had to walk off all that pazhamkanji! 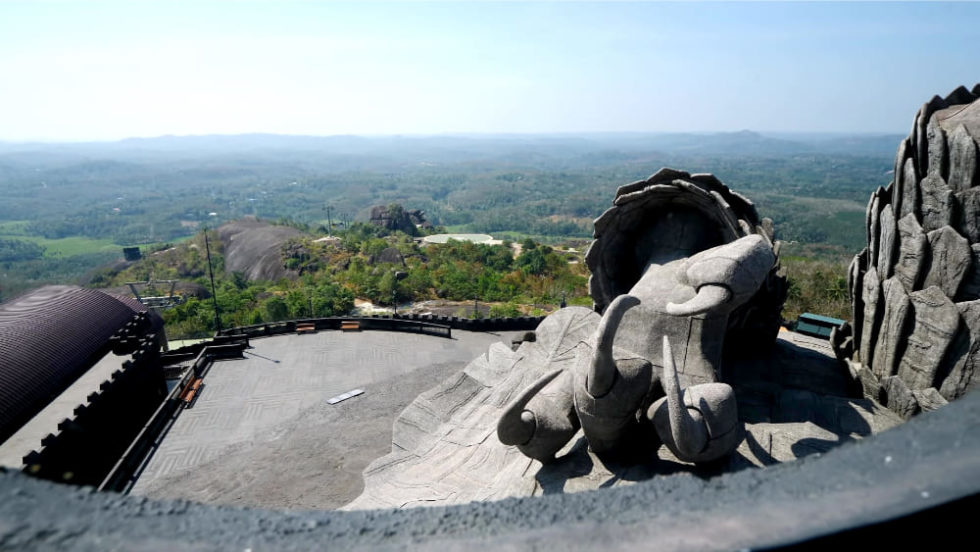 What an awesome way to kick off my second day in Kerala. Again, I have to thank my boy Vishnu for creating my itinerary for the first two days of my trip and for taking the time to show me around. I couldn’t have done this without him! Be sure to give him a follow on Instagram! 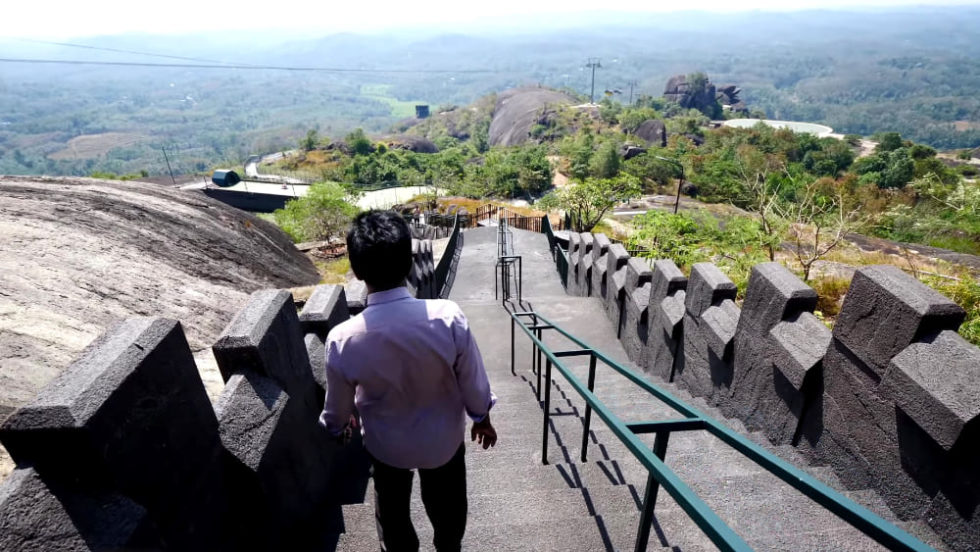 I hope you liked coming with me to have my authentic Kerala breakfast of pazhamkanji and to see the Jatayu Rock Sculpture outside of Kilimanoor, India! If you did, please give this video a thumbs up and leave a comment below. Also, please subscribe to my YouTube channel and click the notification bell so you don’t miss any of my travel/food adventures around the world!