My second day in Kerala, God’s Own Country, continued with an unbelievable lunch at a local restaurant. Come along with me as I enjoy veg and non-veg Kerala food like seafood, duck, chicken, and liver at Vazhiyorakkada Restaurant in Kilimanoor, India, and drive to Varkala!

After leaving the massive Jatayu sculpture in Chadayamangalam, my boy Vishnu and I continued at Vazhiyorakkada, a traditional Kerala restaurant in Kilimanoor. They make some of the most traditional cuisine in Kerala and sell mostly non-veg foods and lots of different types of curries. Everything is locally-made by a woman in the kitchen! 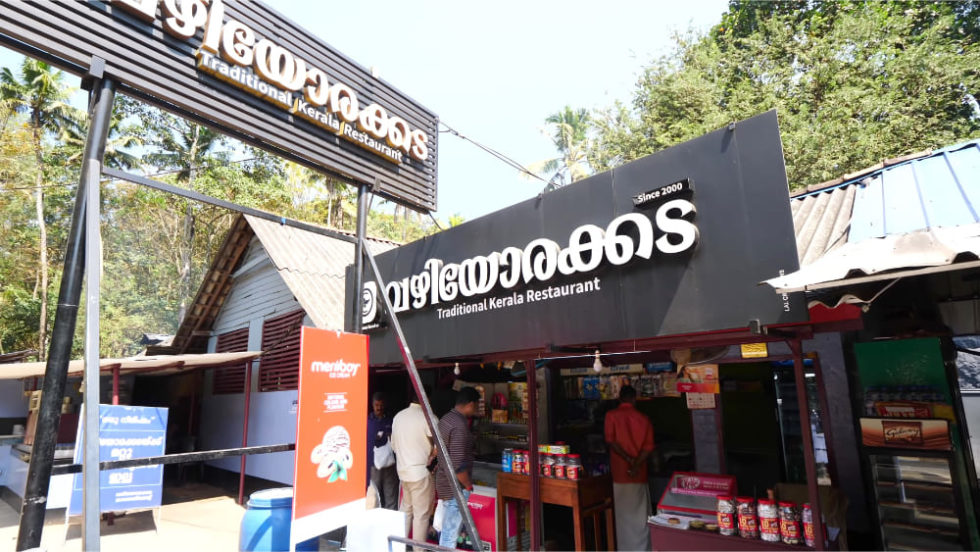 Inside, we took a tour of the kitchen. We saw some papadum in a bucket, some dried fish, super hot chilies, onions, a huge pot of a spicy-looking dish, fish curry, and more. I also got the chance to see the cooks stretch and roll up dough to make parottas. There was tons of seafood there, including a calamari dish called squid thoran, prawn fry, and a curry made from the head of a huge fish. The Kerala food at Vazhiyorakkada Restaurant in Kilimanoor, India looked like it was going to blow my mind! 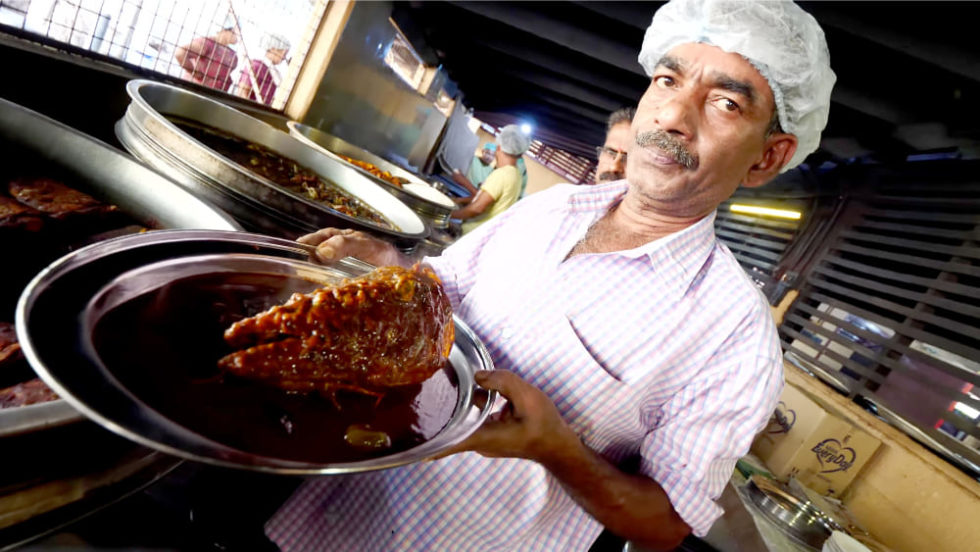 The dishes were being prepared in massive, earthen pots over huge wood fire burners. It was so hot in the kitchen. I sampled some of the prawn fry in the kitchen. It was delicious and covered in an incredible masala. The prawn was so buttery and wasn’t too crispy on the outside. I was ready to sit down and eat!

The restaurant has one big dining hall and family rooms on the other side. We ate in the dining hall and ordered their oonu, which is a meal served on a banana leaf. We started with a bunch of different vegetable curries, which we could mix with the rice, fish curry, liver, chicken curry, duck, and more. Everything, from the chicken roast to the squid thoran to the chicken liver to the prawn fry looked unreal! 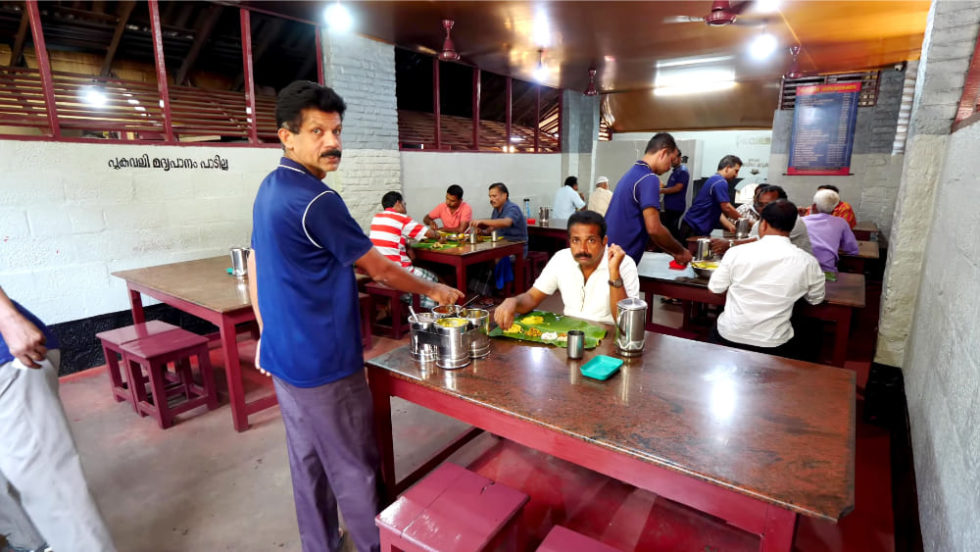 Vishnu started by mixing the parippu curry into the rice and crushing his papadum into it. You eat it by itself first and then you can mix in whatever you want. I started with some chicken liver, which blew my mind right off the bat! It was so buttery and delicious! 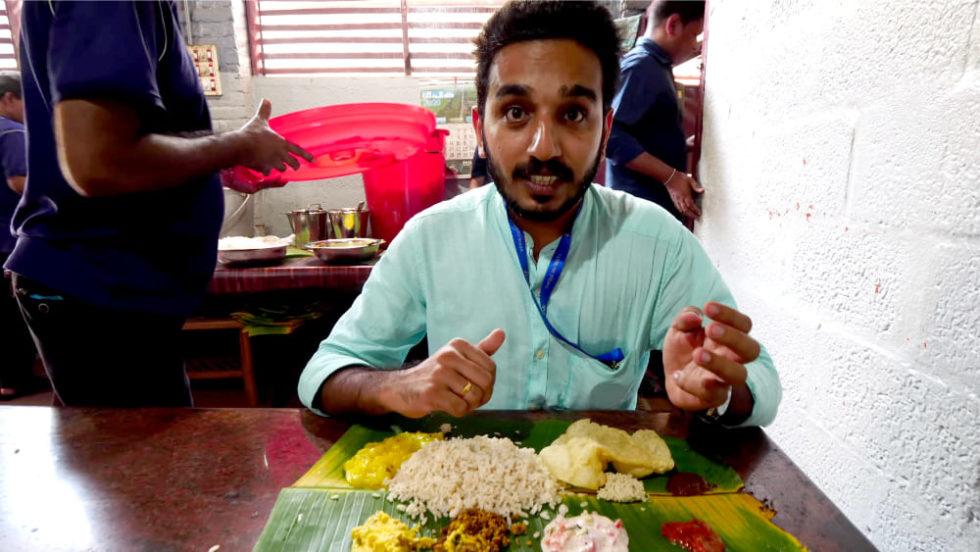 Then, I mixed the parippu and papadum into the rice. It was a delicious first bite! Then, I added a prawn. It was so spicy and so good. It’s the ultimate spicy seafood dish! Then, I tried some of the duck roast by itself. I loved the greenish gravy, which wasn’t spicy at all. I could taste the curry leaf and black pepper in it. 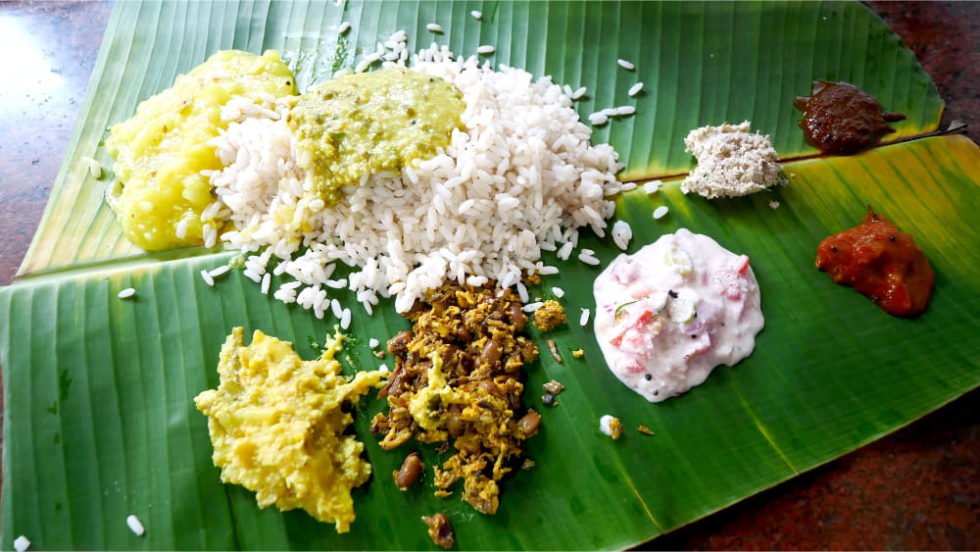 Then, I went for the squid and mixed it into the rice. It contained coconut, which was the dominant flavor. What a dish! I couldn’t get enough of it! The squid was soft and I could tell it was fresh and had never been frozen. Then, I took some of the fish gravy and mixed it into the rice. This non-veg Kerala food at Vazjouprallada Restaurant in Kilimanoor, India must be on your intinerary when you come here!

Next, I tried the chicken curry. It contained tiny bones, which I had to be careful of. It was good and spicy! I noticed that the redder the curry, the spicier the dish was. The chicken mixed with the cassava and rice was an amazing blend of flavors. I cleansed my palate with some potent ginger pickle, which was so strong I had to calm it down with a handful of rice! 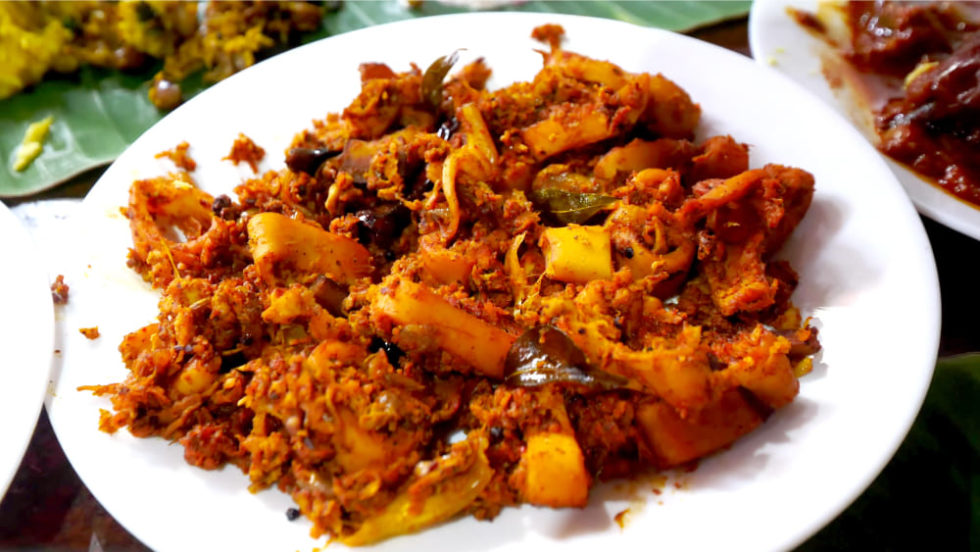 Then, it was on to the fish fry! I broke off a piece, which was like a delicious fish steak! I mixed it with the rice. It was salty and had a smoky, barbecue flavor from the wood. The combination of flavors was incredible. I added more spicy curry to give it more of a kick. I love spicy Southern Indian food! 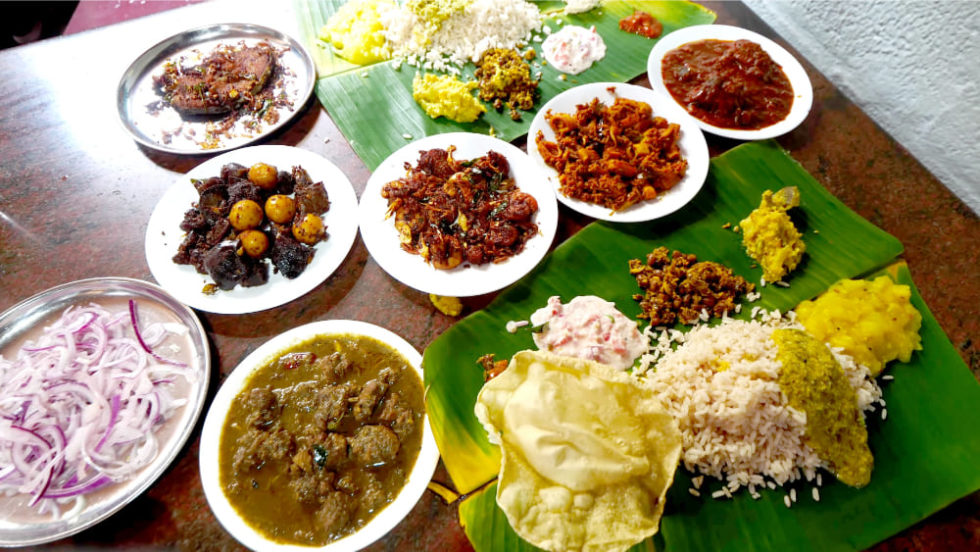 They then added some sambar to my rice and gave me some pachadi right in my hand. This is a mix of pineapple, cheera, and beetroot. It was spicy and sweet at the same time! Then, I tried a quail egg, which was like the best hardboiled egg I’ve had in my life! Everything was so good because it was so fresh and came from the area. There was a farm literally right outside. It makes a huge difference in the quality of the food! I almost never feel full when I’m eating fresh food.

I went with more delicious liver and the coconut with chilies, another quail egg, and more. The quail egg was pure yolk! And I kept going back to the squid thoran, which was the best squid on Earth! Then, Vishnu mixed some of the pulisheri with the duck roast. The whole meal was out of this world. It was really one of the best meals I’ve ever hand in India. It was spicy, full of flavor, and I loved the coconut aspect of it! 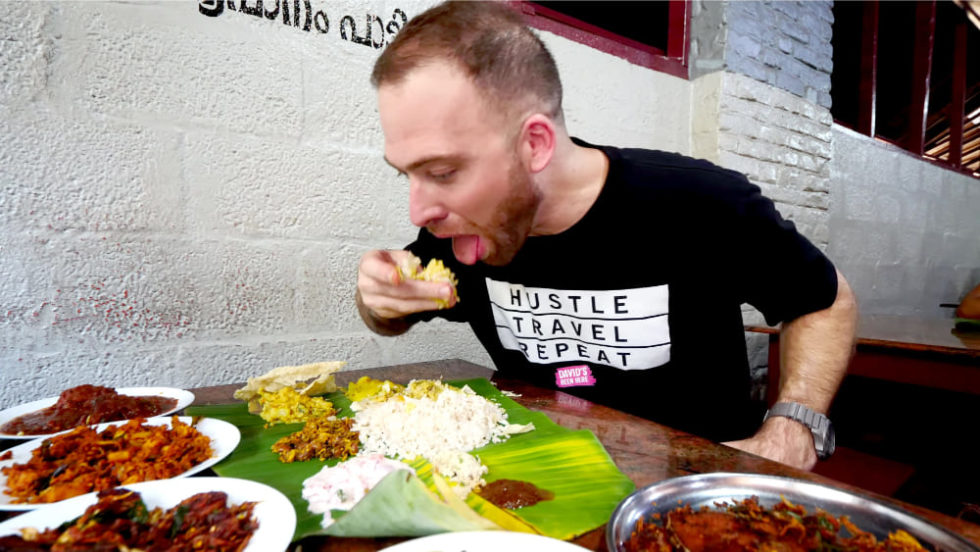 To finish up, I mixed the squid thoran, prawns, rice, coconut with chili, mixed it up, and dug in. It was the best thing ever! There was coconut oil in everything, which made it all even better! You have to visit Vazhiyorakkada Restaurant when you come to Kerala! 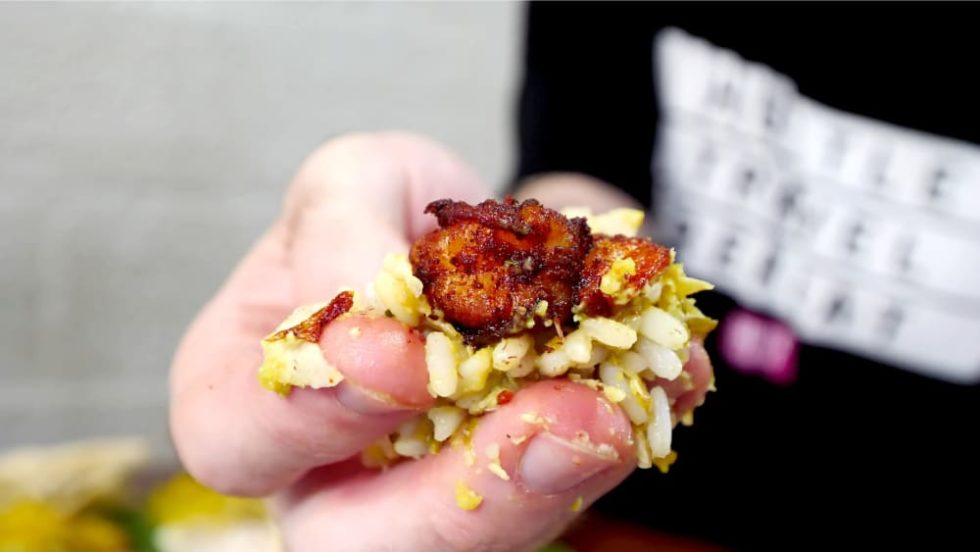 When you finish your meal, you always fold your banana leaf away from you and then fold it together and take it to the trash in the back. Across from it is a place where you can wash your hands with soap and water. You want to get all the spices off your fingers because you don’t want to accidentally get them in your eyes later! 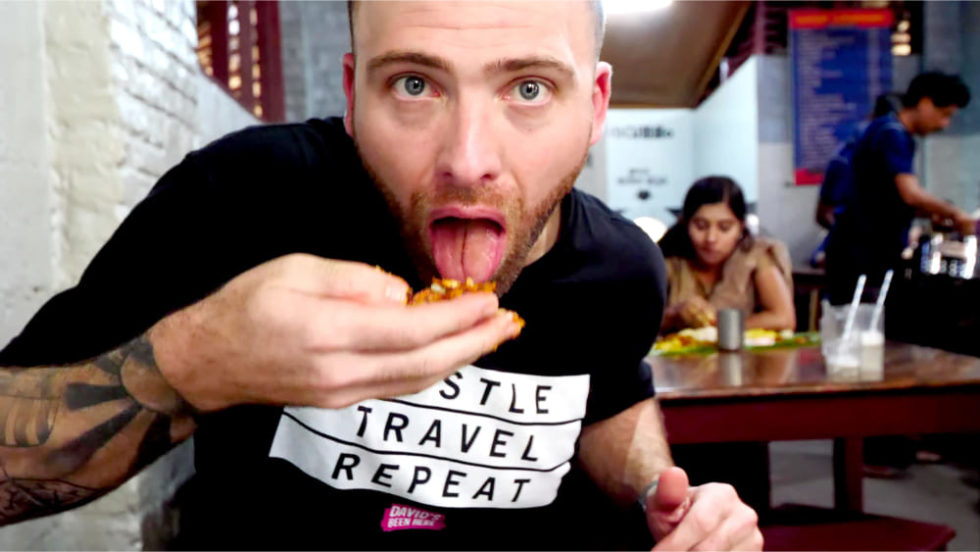 What an unreal veg and non-veg Kerala food meal at Vazhiyorakkada Restaurant in Kilimanoor, India! It was the grandest meal I’d had on my trip so far and one of my favorite meals ever in India. 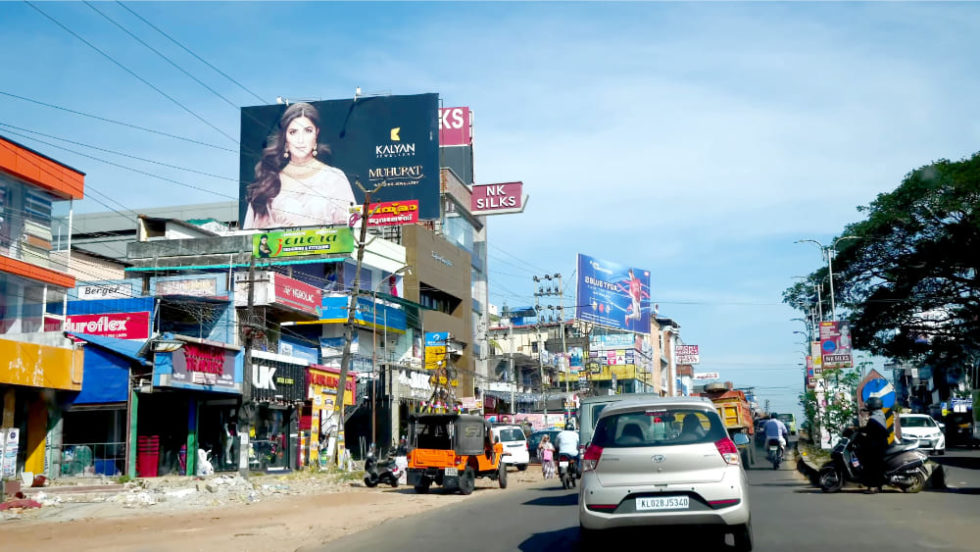 From there, we drove from Kilimanoor to Varkala. There, we’d go to the beach and get to our Airbnb! We passed by six or seven small towns along the main highway, which connects each town. It connects all of Kerala and several other states and Mumbai. Half of India is connected by this road!

We passed by lots of jungle bush and pockets of towns and a scarce amount of houses and shacks in-between. There were also lots of coconut trees and banana trees. It was super hot out and the sun was beating down on us. 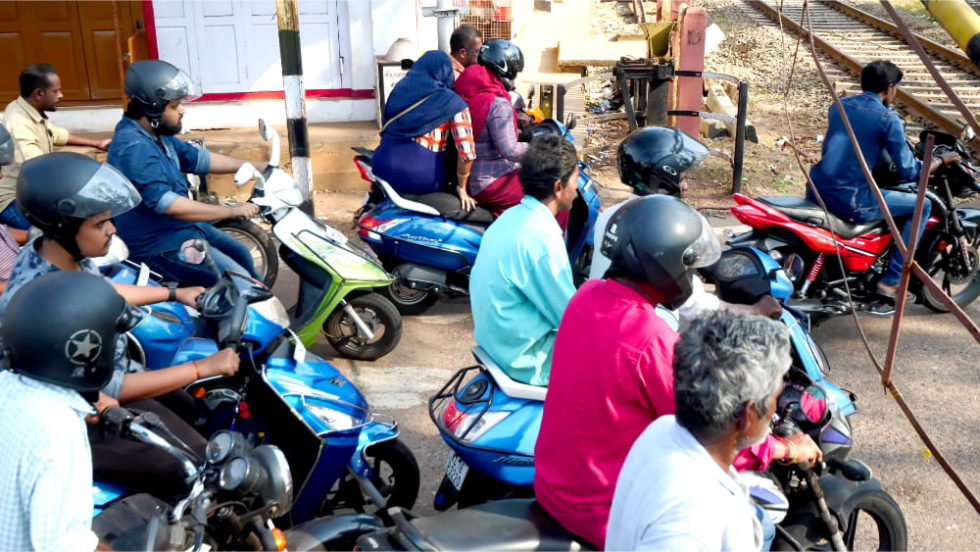 After going the wrong way for a while, we found our way and eventually got stopped by a train, where there was a huge traffic jam! It was crazy! Then, finally, we arrived at the Varkala Cliff Helipad. Right down a narrow alley between lots of houses was our Airbnb, the Palm Bay Beach Residences. It’s a big house with lots of different rooms and is located on the cliffs. I had a king-sized bed and a nice bathroom. They have an apartment and 12 rooms in total. 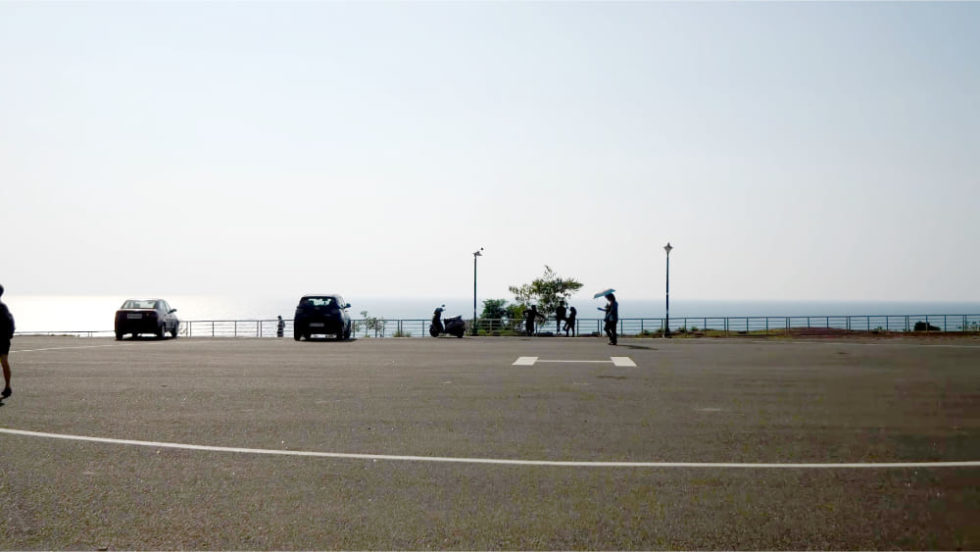 What an epic afternoon enjoying veg and non-veg Kerala food at Vazhiyorakkada Restaurant in Kilimanoor, India! If you’d like to learn more about them, check out their website. I also have to thank my buddy Vishnu for showing me around and for taking me to this incredible traditional restaurant. Be sure to follow him on Instagram! 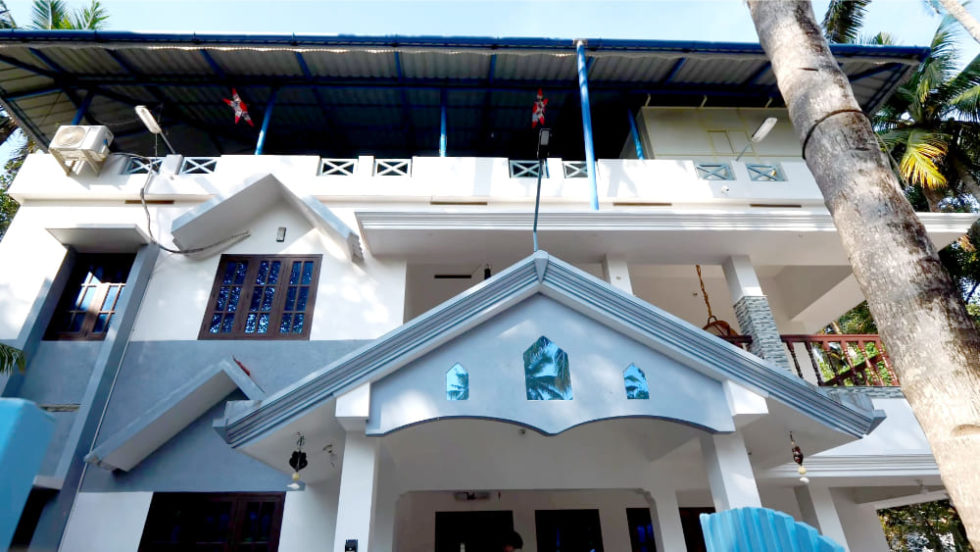 I hope you enjoyed coming with us to Vazhiyorakkada Restaurant and Varkala! If you did, please give this video a thumbs up and leave a comment below. Also, please subscribe to my YouTube channel and click the notification bell so you don’t miss any of my travel/food adventures around the world!