My third day in Bhutan began with breakfast at the Happiness Field Village Homestay in the city of Punakha. After that, I’d visit a unique local village and monastery! Come along with me as I try more authentic Bhutanese foods and explore the village of fertility in Punakha, Bhutan!

My traditional breakfast included some rice porridge and fried rice with ezay, which is a spicy Bhutanese chili salsa. I like rice porridge, but I had to add some ezay to it because it’s bland on its own. Adding the ezay gave the rice porridge a kick of heat and flavor! 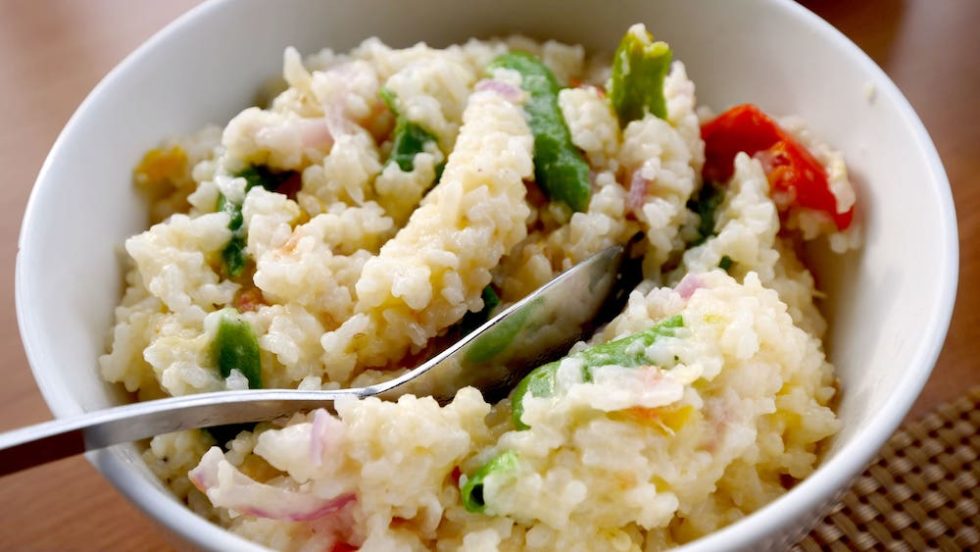 The fried rice was creamy and sticky, almost like risotto, and contained long beans, onions, chilies, and other vegetables. It was like a spicy risotto/fried rice mix! It was stickier than risotto, though. The spice in Bhutanese foods is amazing! 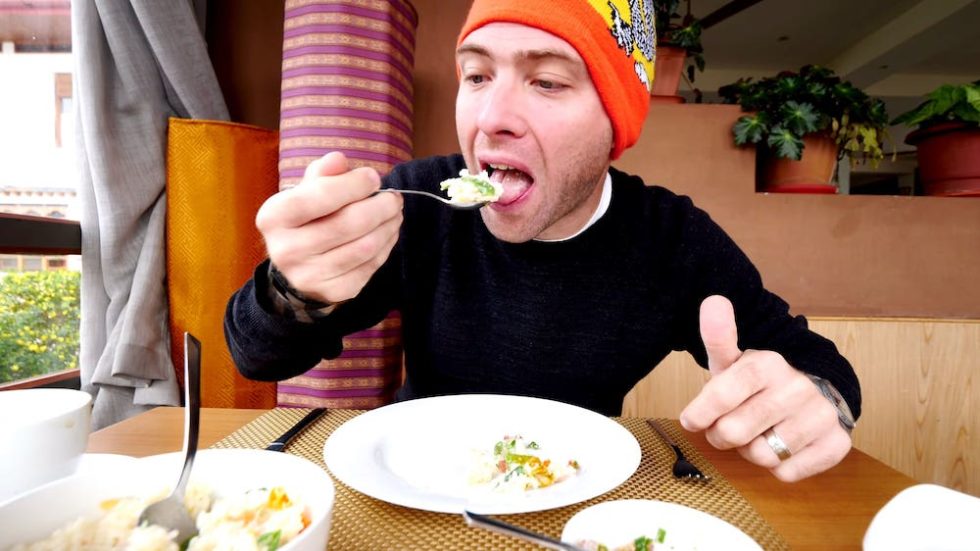 Nearly every dish in Bhutan has green or red chilies in it, so almost all of them have a decent level of spice to them. The fried rice in Bhutan is on another level! The spice level was maybe an 8 out of 10. Definitely hot, but not so hot I couldn’t handle it! 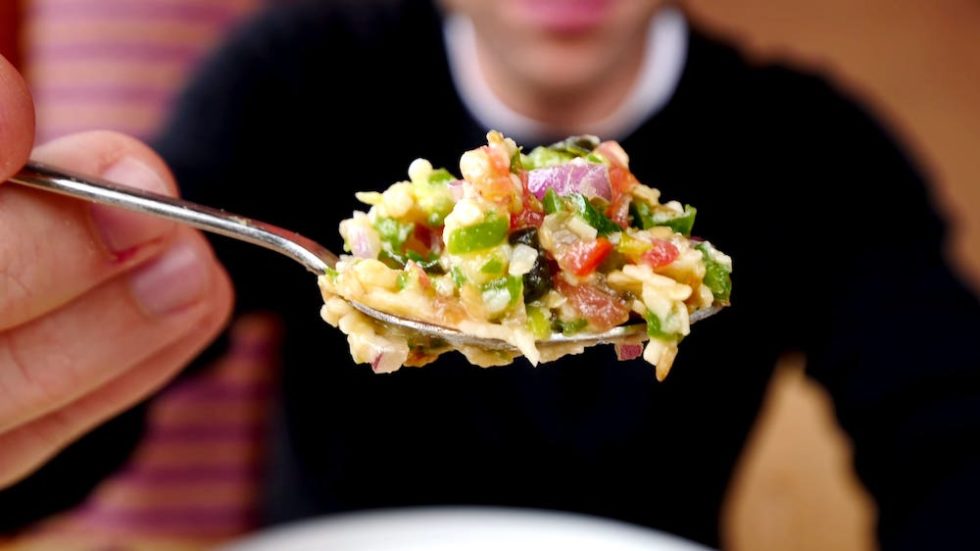 Most Bhutanese hotels have a buffet with Western and Indian breakfasts, but if you want only authentic Bhutanese dishes, it’s extra, but it’s worth it! Because they’re right next to India, they also have milk tea, or chai, with ginger. I like it more than the coffee! 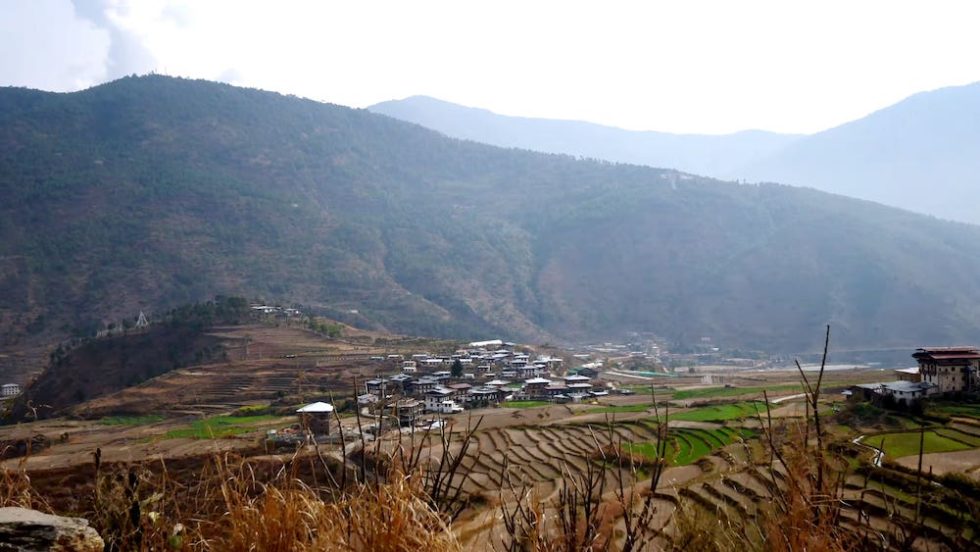 I met up with my driver, Nidup, and my guide Tsheten, both from MyBhutan. We’d be hiking through a local village called Sopsokha to the Temple of Fertility. It was a beautiful, cold day.

Check out the Top 10 Things You Must See and Do in Punakha, Bhutan

We reached the village of fertility, Sopsokha, a small hamlet in Punakha, Bhutan where phalluses are painted on every house and restaurant as a symbol of fertility. The phalluses are all different colors and have eyes. Some even have fangs! 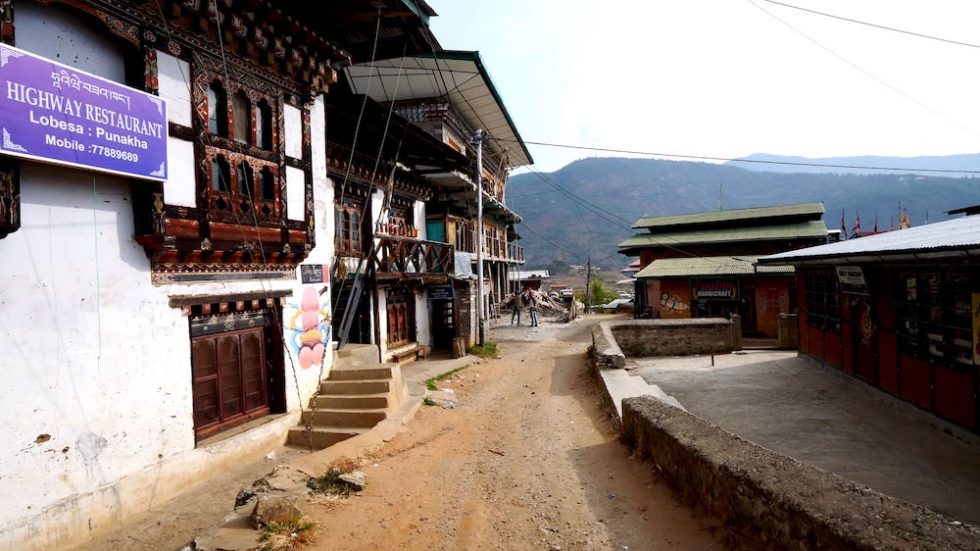 They also chase away evil spirits. In the handicraft souvenir shops, they even sell phalluses! It dates back to the 15th century when a Tibetan saint who came to Bhutan and subdued evil spirits using his phallus. It was so unique…I’d never seen a place like this! 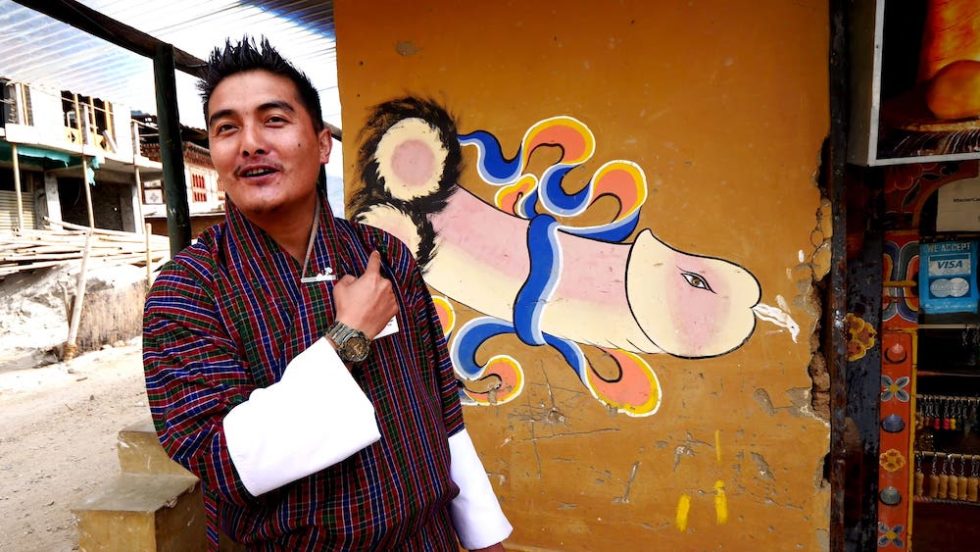 It takes about 2 minutes to walk through this portion of the town. There were phalluses literally everywhere I looked! It was definitely one of the most unique places I’d ever visited in my travels! 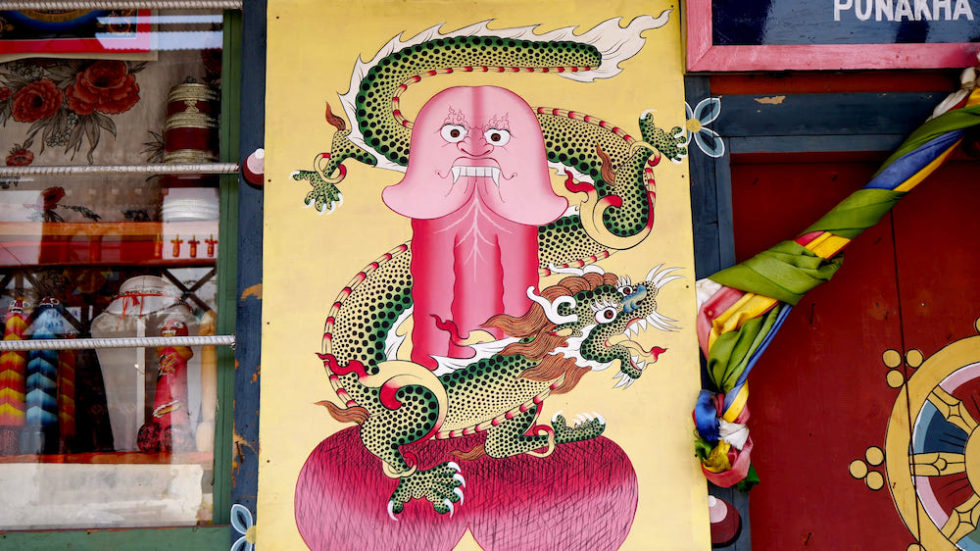 In addition to the phalluses, the architecture in Sopsokha is also amazing. Past the village is rice paddy fields. It’s really beautiful! Past the fields is the second part of the village, where you’ll find a water prayer wheel, which turns with the help of water. It was really cool! 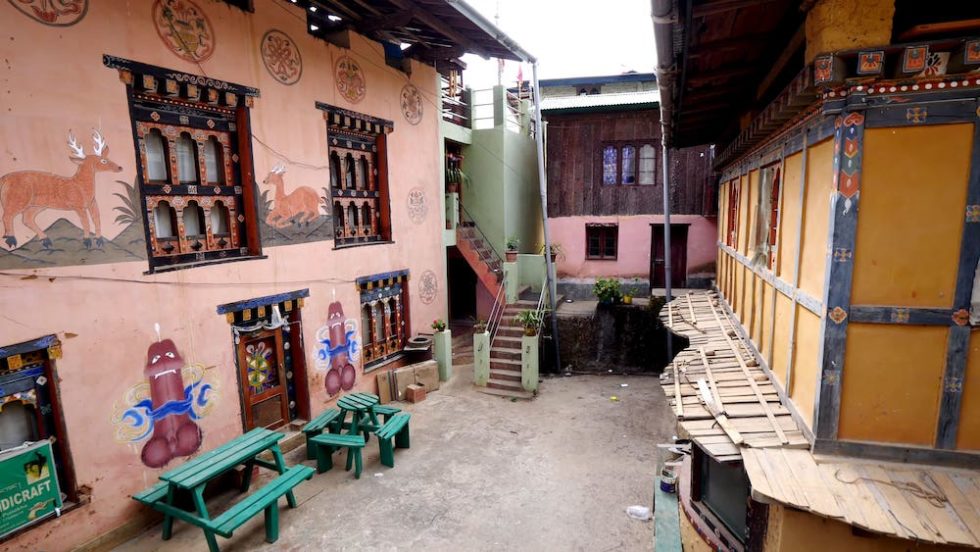 You have to pass through the second half of Sopsokha to get to the Chimi Lhakhang Monastery. There are a lot more phalluses everywhere, including inside the shops. You can actually buy some carved ones, including keychains, as souvenirs! 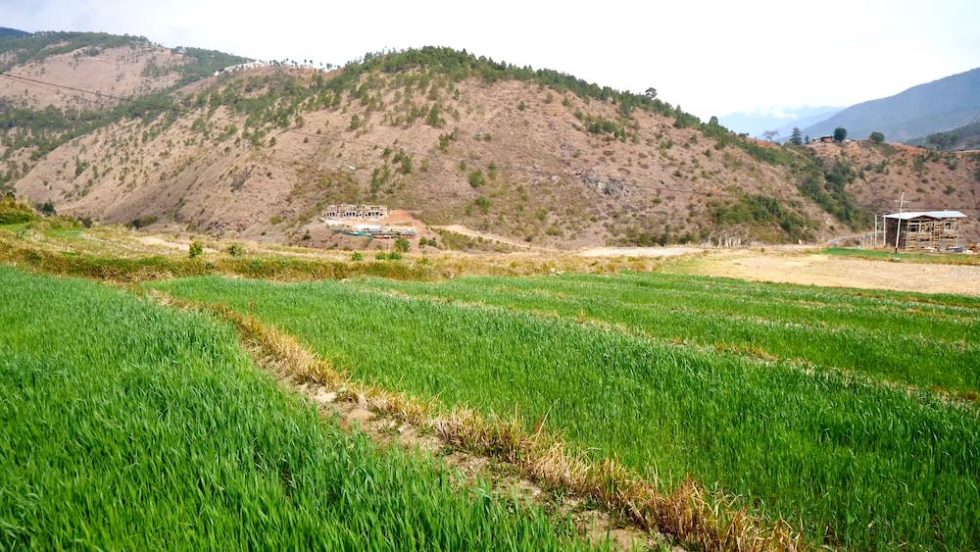 Less than 1,000 people live in this village of fertility near Punakha, Bhutan. I saw a well with clean water coming from it and some people making tea in an open kitchen. 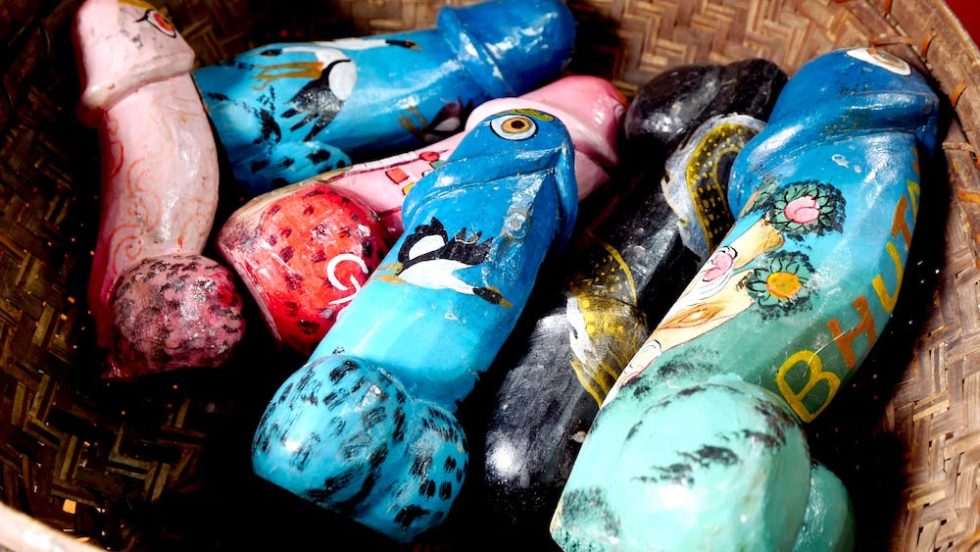 I visited a souvenir shop and found a huge, painted phallus there. You can give it as a gift to wash away evil spirits. If you want to have kids, you have to go to the temple and get a blessing. Inside the souvenir shop, they also had beautiful paintings, scarves, prayer beads, and masks. 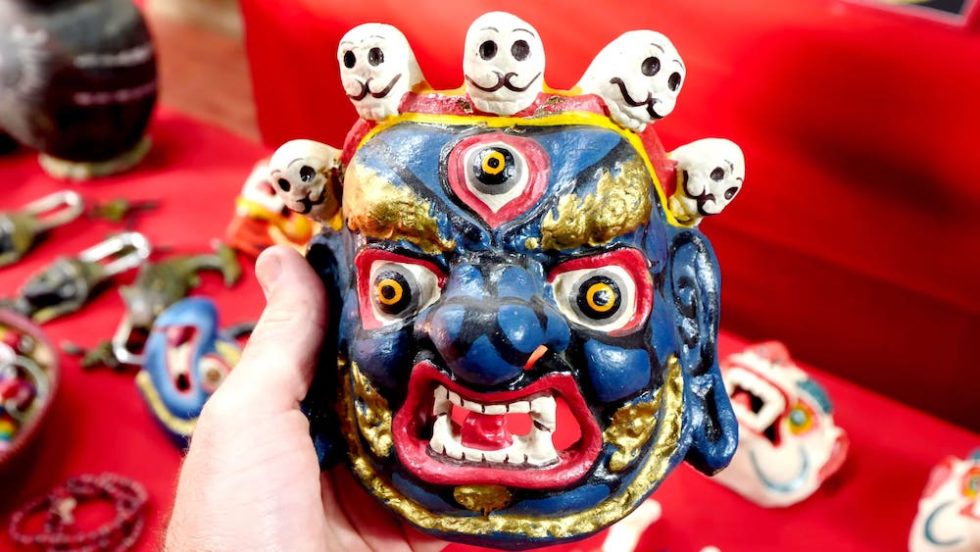 The traditional masks were about 1,500 Nu, or about $19.84 USD. They were all beautiful and made of ceramic, and they had some bigger ones as well.

Check out the 18 Things You Must See and Do in Thimphu, Bhutan

Then, we continued our hike through the village. I was so fascinated by the village of fertility, which was one of the most interesting spots I’d seen in Punakha, Bhutan yet! If you want to buy a phallus, I suggest visiting all of the shops to see what they have. 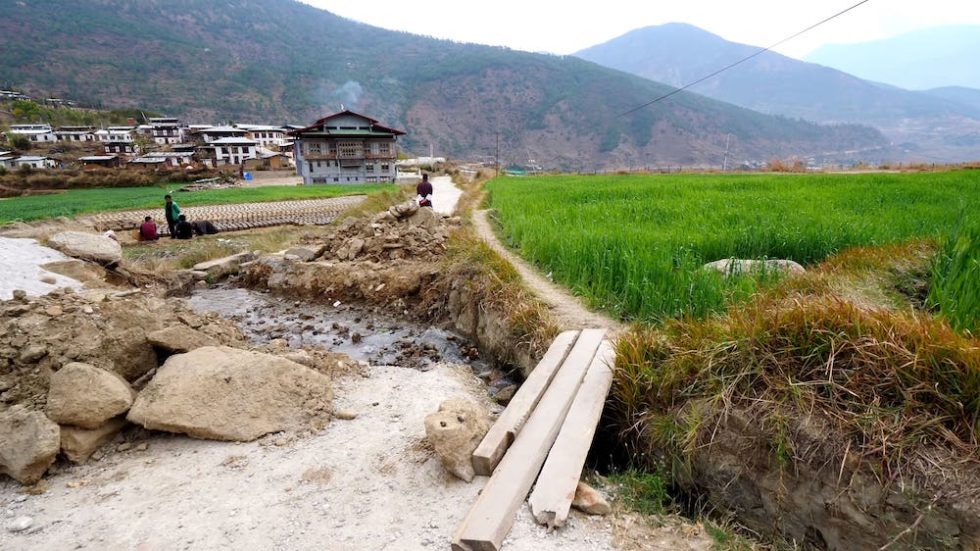 Some have lots of them, while others only have a few. Some are extravagantly painted and some are just plain wood, so look around to see which ones you like. My favorite was a black-and-red one with a dragon wrapped around it! 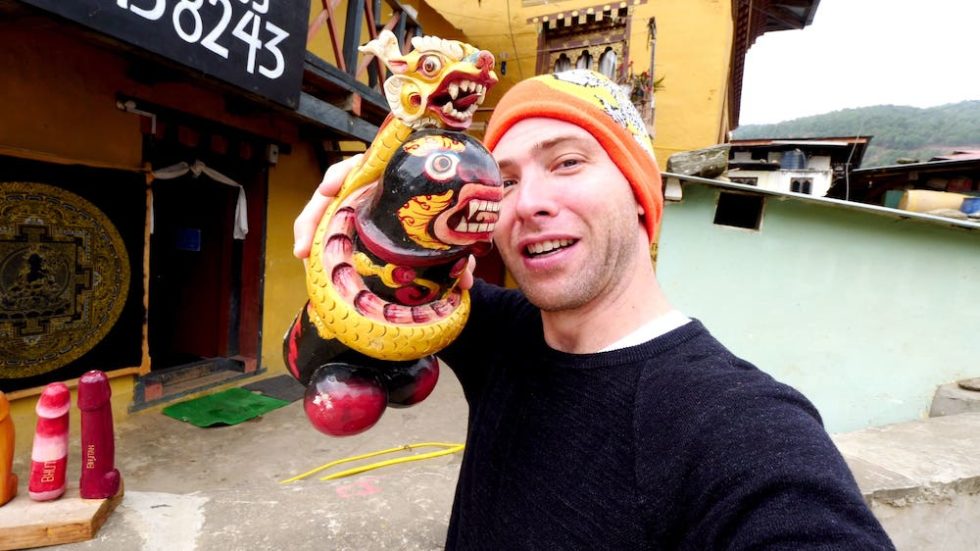 The buildings in the town were beautiful. I couldn’t help but marvel at the traditional Bhutanese architecture as we passed through on our way to the monastery. We continued on to more fields, where we saw them making mud bricks. 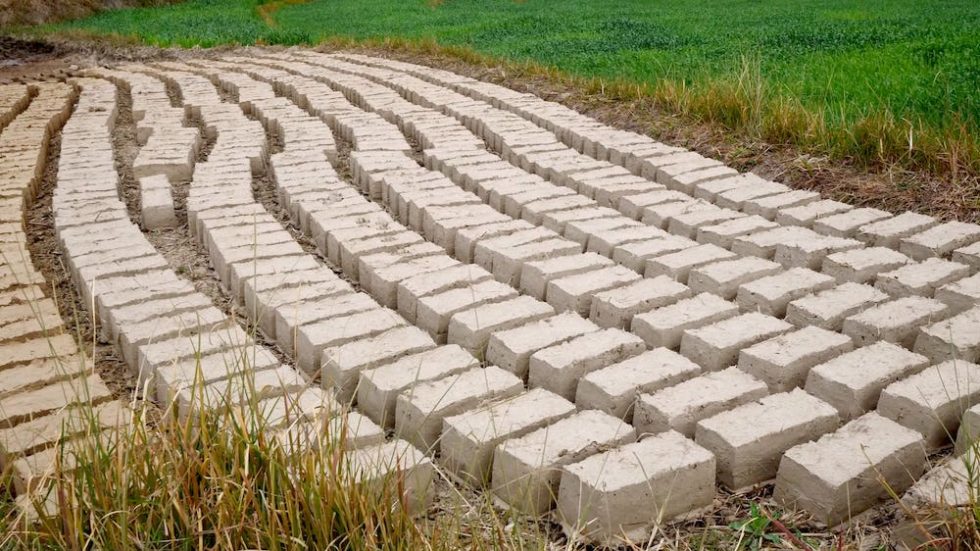 We came across another shop with lots of differently sized phalluses outside. Some of them were creatively painted and they even had some made to look like airplanes with the Bhutanese flag on the wings! They also had tons of masks, beads, clothing, scarves, and honey! They even have phallus keychains! 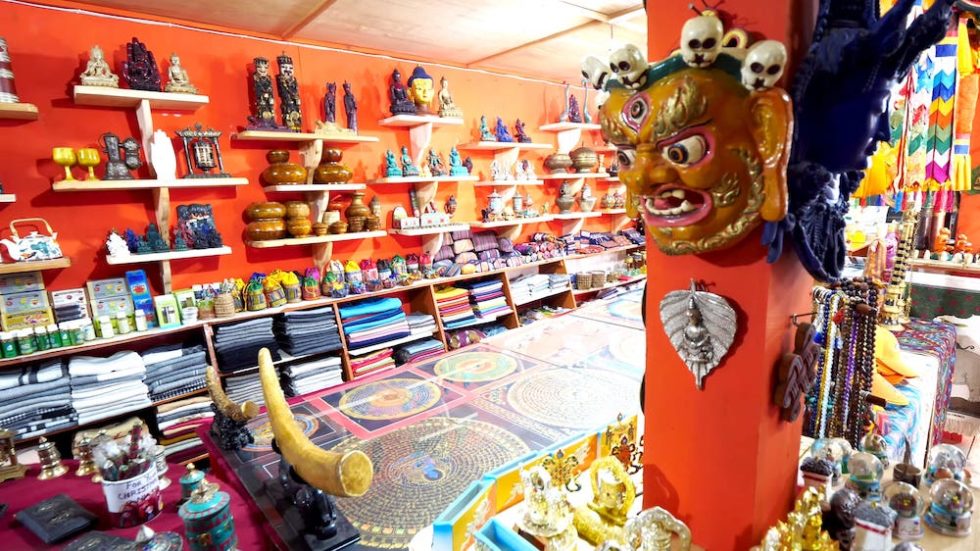 Chimi Lhakhang Monastery was established by Lam Drukpa Kuenley, a Buddhist master who personified the Vajrayana tradition known as “Crazy Wisdom.” He was known as the “Divine Madman” due to his unconventional and outrageous style of teaching. 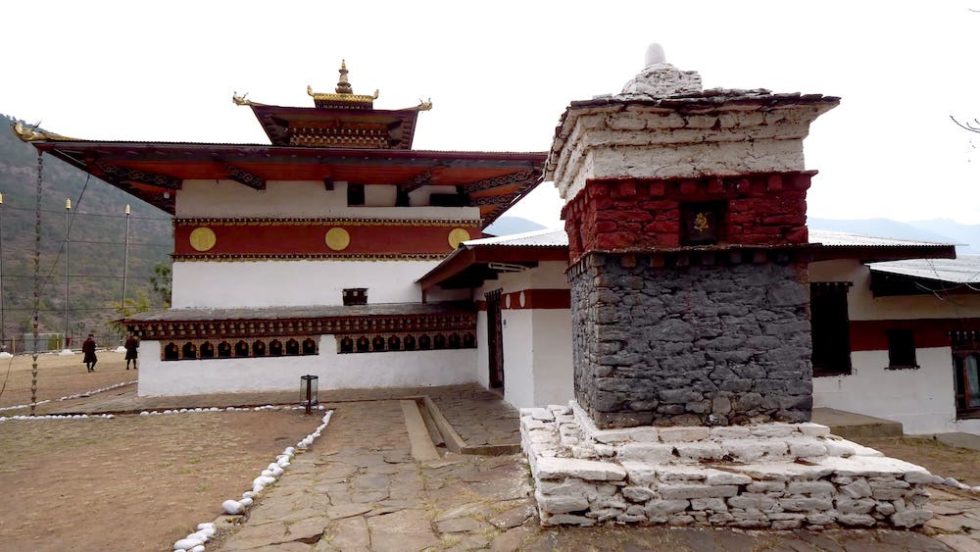 He acted like a vagabond and indulged in song, dance, alcohol, women, hunting, and feasting, all of which were beyond the norms of the time. He was able to subdue the demon of Sipsikha and the demon of Dochula, who combined forces and turned into a black dog to kill him.

Check out the Things to See, Do, and Eat in Haa Valley, Bhutan

Near the monastery is a black stupa, where the Divine Madman captured and subdued the black dog. There’s also a large prayer wheel and 108 smaller ones. Inside the temple, I took off my hat and shoes. I could film inside the courtyard, but not inside the shrine or any of the other holy places. 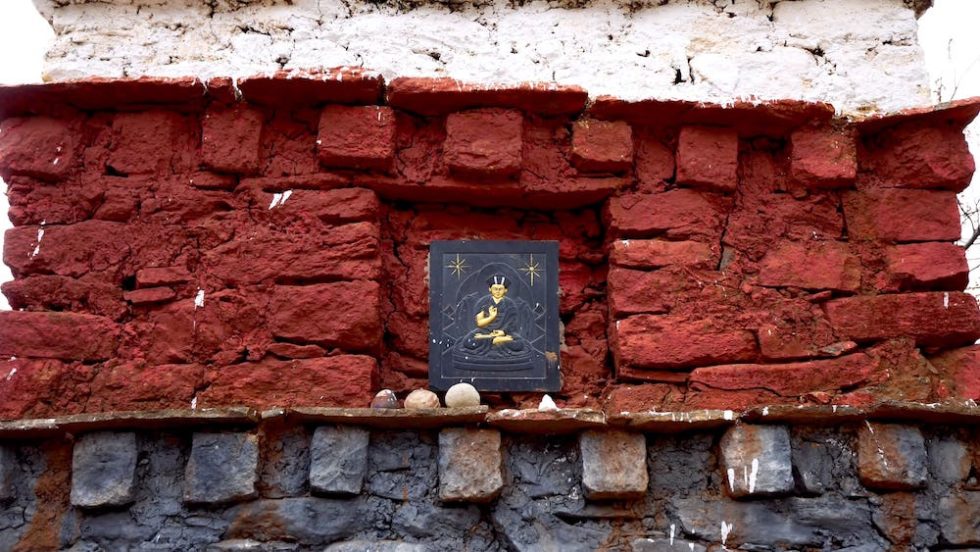 Inside, prayers were in session. There are also students and lots of different types of offerings. It was great to see the monks. In Bhutan, children start training to become monks at the age of six and become monks for life. 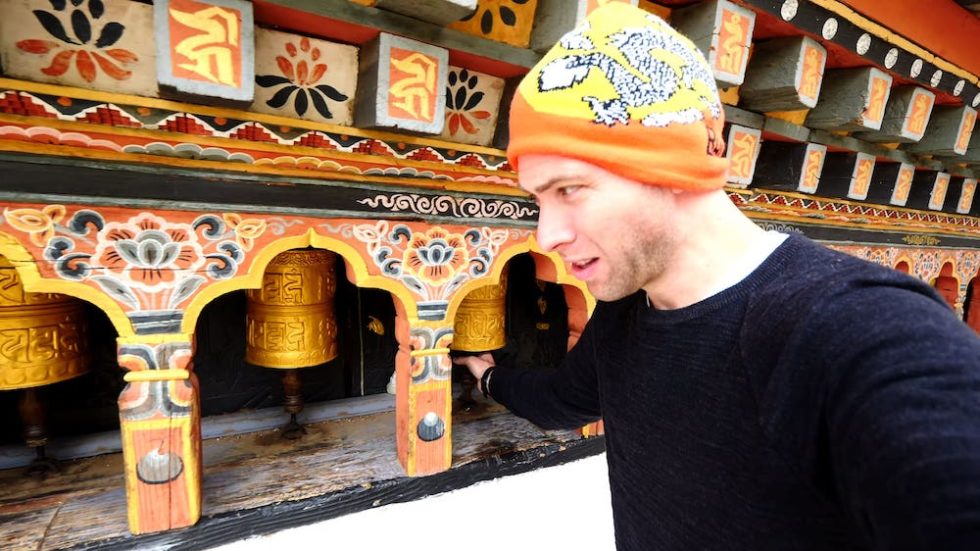 There was lots of music and chanting at the monastery. You should go around the prayer wheel once. Then, we headed back through the village and rice paddy fields. We took a different route and passed some wheat fields as well. 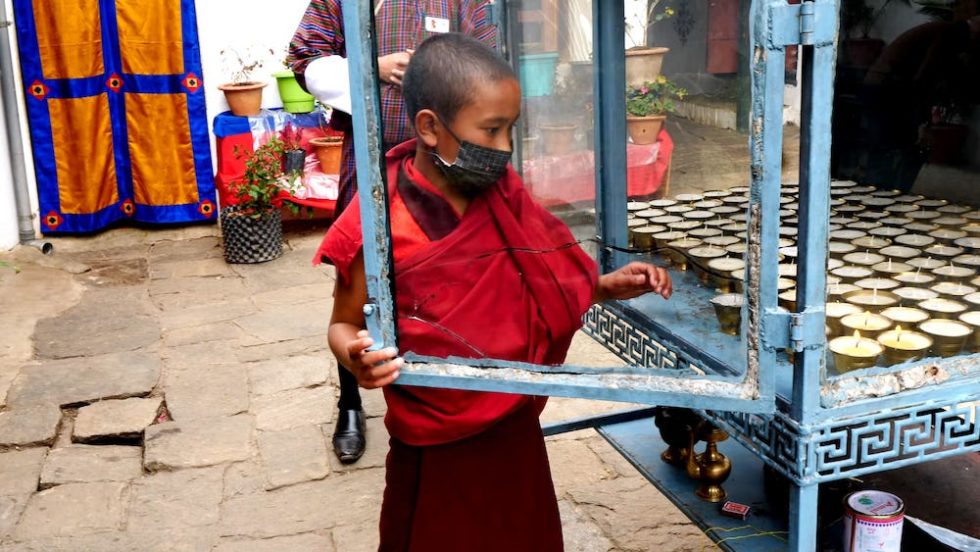 Next, we headed to a nunnery that was built in 2008 and officially started in 2010. There are also a few houses in this area of the Punakha Valley and lots of resorts. It’s all surrounded by gorgeous mountains and rice paddy fields. There’s also a fruit garden that grows guava, mandarins, mango, pomegranates, and more! 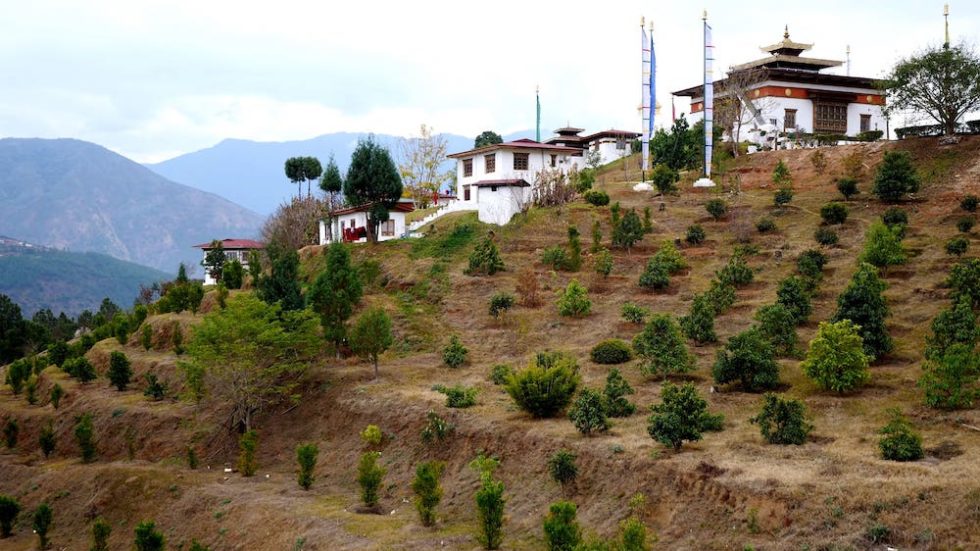 The nunnery was closed, unfortunately, so we drove back to the village of Sipsikha to have a traditional lunch. It’s located in the first part of the village and overlooks the rice paddy fields. As it was lunchtime, there were many more tourists coming into the village now. If you want to explore with little or no tourists, come early at 9 a.m. like I did.

Check out the Top 5 Things to Do in Paro, Bhutan 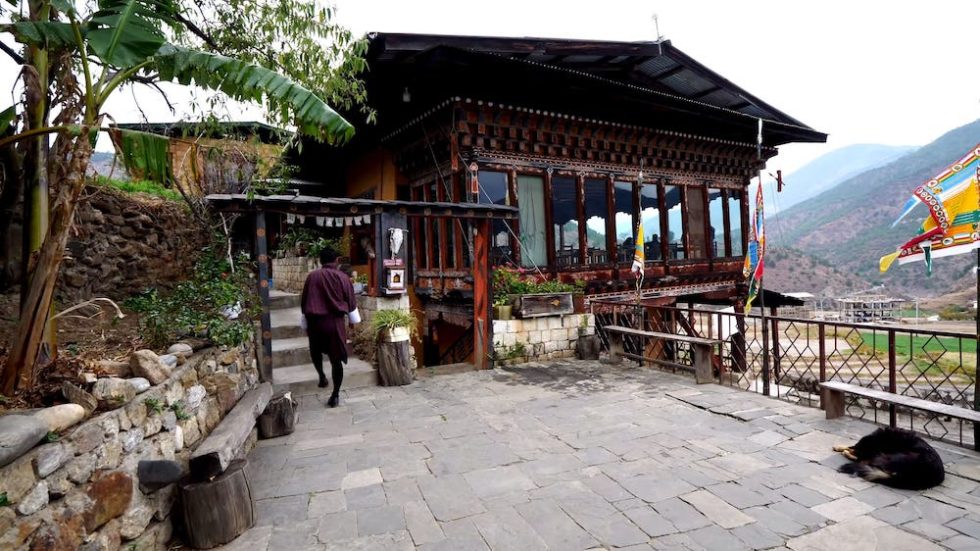 I started with a light Druk lager with 5% alcohol and then moved on to our traditional Bhutanese feast. It had a Corona-like lightness but with a bit of a crafty taste. The spread consisted of red rice, ema dashti, vegetable soup, dried beef sausage with chilies, and dried pork with spinach and chilies. 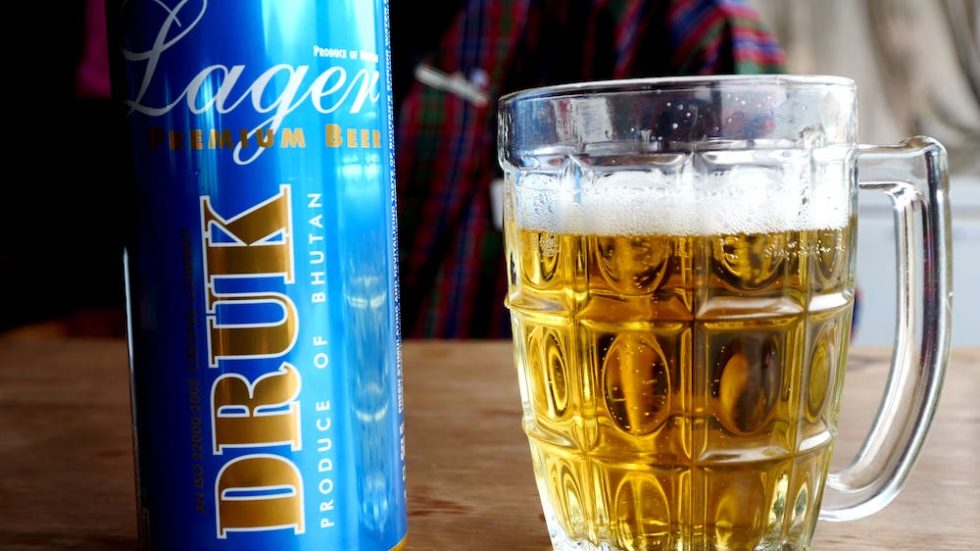 The ema dashti was spicy and delicious and contained mushrooms. The green chilies are really hot, but the red ones aren’t so bad. The red rice really helped calm down the heat. The beef sausage contained some chili seeds and chili oil. It was nice and crunchy. You eat them with the ezay, which also contains onions. It was great! 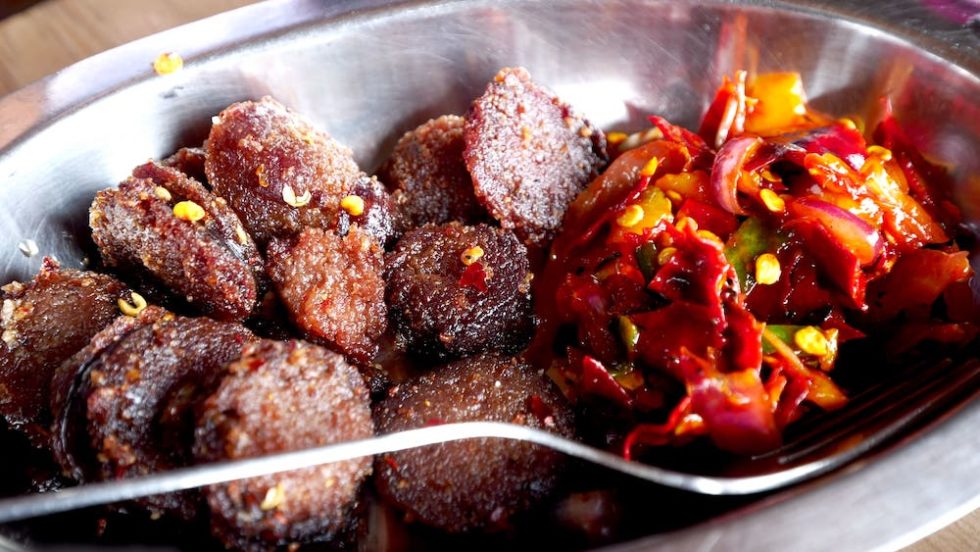 The vegetable soup was light and cloudy and contained spinach but no spice. I really liked it! Then, I went for the dried pork. It was mostly gelatinous pork fat with a bit of meat. You eat it with the spinach and chilies. The gelatin falls apart in your mouth, and the sautéed spinach and chili combination was really nice. The layer of meat was hard to bite through, though.

Check out my article, Why Does it Cost $280 Per Day to Visit Bhutan?

The ema dashti was my favorite, though. It’s one of my favorite dishes on the planet now! It has a consistency similar to spinach dip. The chilies in the sausages felt like numbing Szechwan peppers. My least favorite was the meat layer in the pork, but it was still nice. The sausages were so good that I got a second plate! 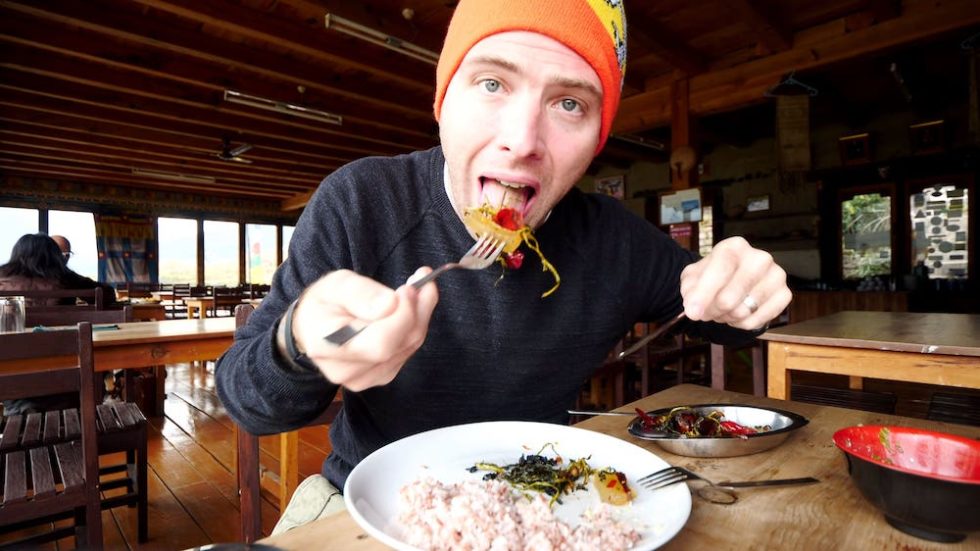 What a morning in the village of fertility, Sopsokha, and a great start to another awesome day in Punakha, Bhutan! This was one of the most unique experiences I’ve ever had while traveling. It was also one of my favorite experiences in Bhutan! 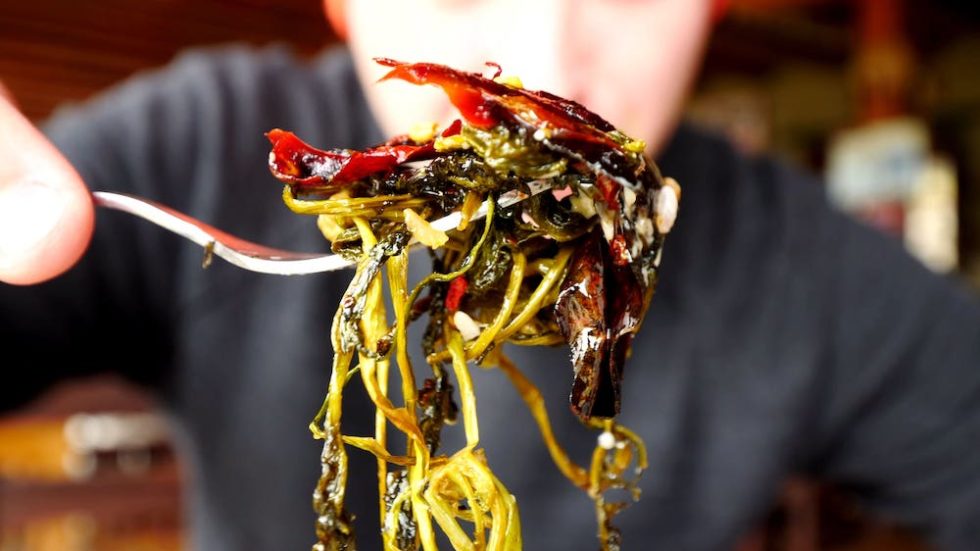 I hope you liked coming with me to try more authentic Bhutanese foods and to visit the village of fertility, Sopsokha, in Punakha, Bhutan! If you did, please give this video a thumbs up and leave a comment below. Also, please subscribe to my YouTube channel and click the notification bell so you don’t miss any of my travel/food adventures around the world!