My adventures in Tbilisi, Georgia continued with a tour of the capital on a bright and sunny afternoon. Come with me as I see how they make Georgian cheese and visit more of Tbilisi and the attractions in the capital city of Georgia!

My guide Sophie from Travel Tbilisi and I started off at the Dry Bridge Market, a flea market where you can buy antiques, souvenirs, handicrafts, and more. 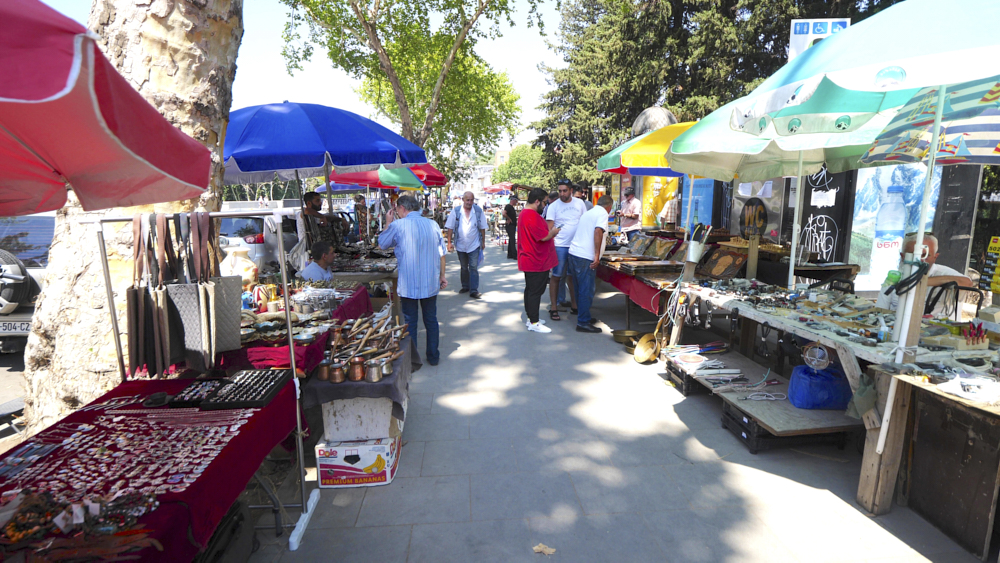 One vendor that caught my eye sold pieces of carved wood etched with designs of lions, designs, maps of Georgia, Georgian script, and more. They cost just 300 GEL, or about $100 USD. 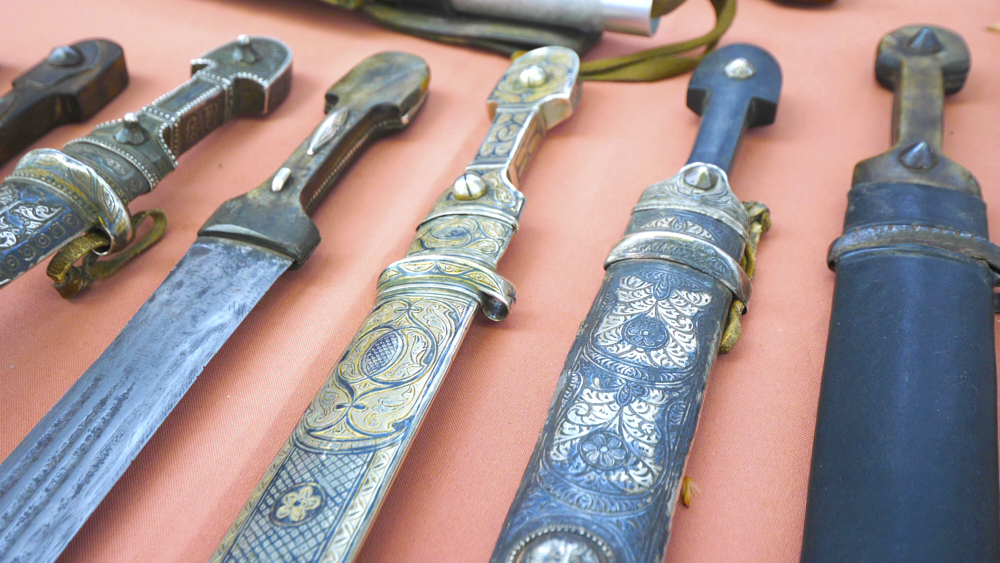 Further on, I saw some traditional Svan hats, which come from northwestern Georgia. They also used them as drinking bowls! I also saw some old-school cameras and lenses and intricately designed daggers before we made our way to the Bridge of Peace, a glass-and-steel bridge built after the Georgian-Russian War in 2009. 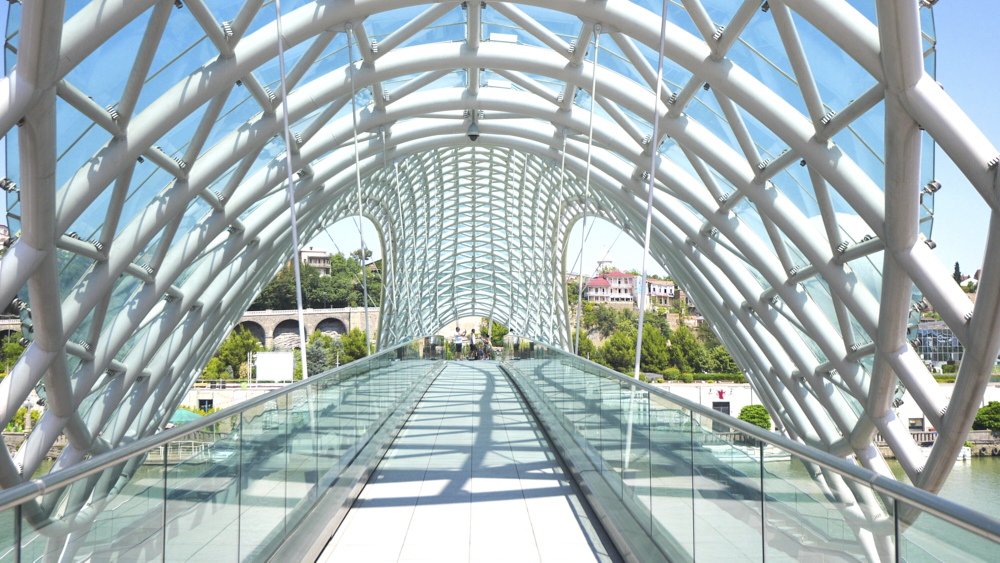 We continued on to a vendor selling pomegranate and orange juices for 5 GEL or roughly $1.50 USD. The pomegranate juice was amazing! 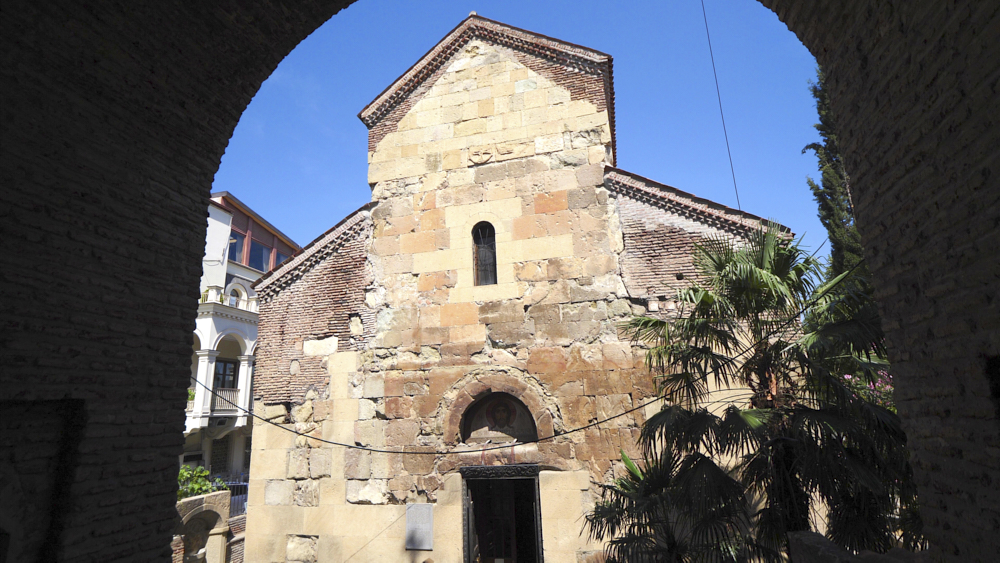 Next, we visited the oldest church in Tbilisi, Anchiskhati Basilica. It’s a 6th-century church and became a bathhouse during the Soviet period, but some of its frescoes survived.

Outside the church is a set of stairs, at the top of which is a fountain and a bizarre-looking Clock Tower.  It leans to one side and was built in 2010 by Rezo Gabriadze. The clock tower was built by a famous theatre director, who built it and the theatre next door from pieces of old buildings. 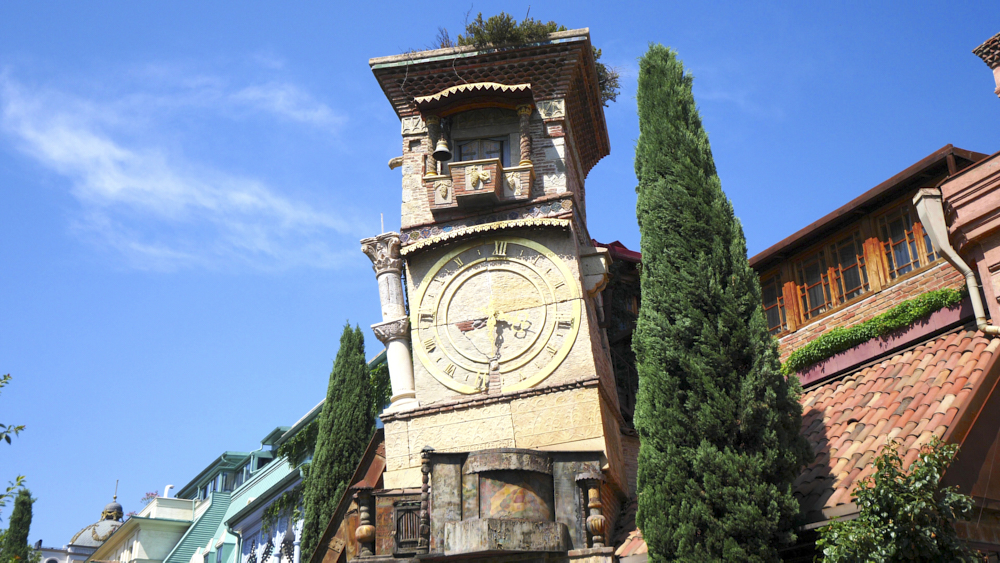 Then, it was time to make some Georgian cheese at a local restaurant called Tserti. Everything there comes from their farm! Inside, I got to see their cheese-making process. After 24 hours, the sulguni cheese is moved to a pot with hot water, where it becomes almost like a glue! Then, we headed up to their bakery to see the bread-making process. 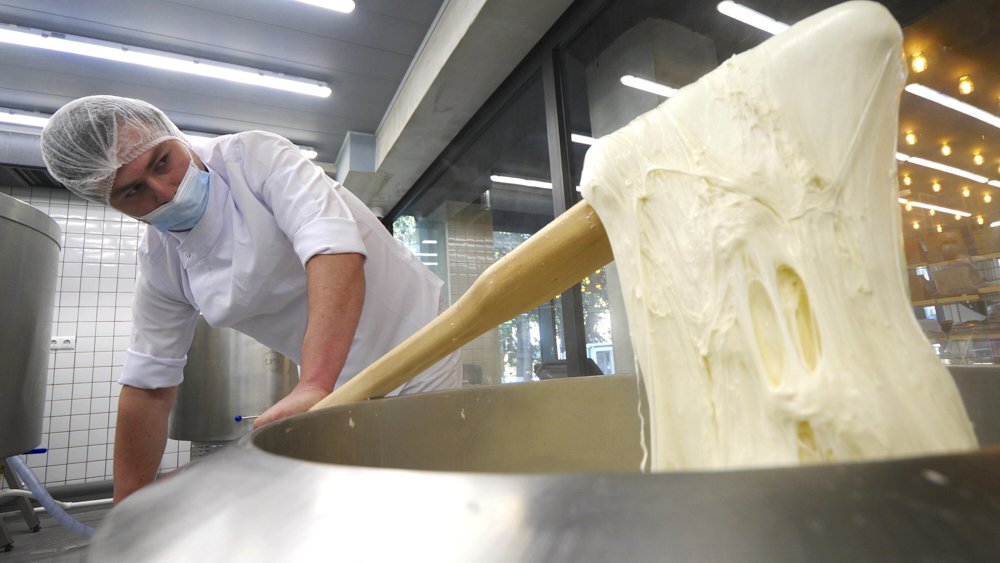 At our table, we tried some dry-aged angus beef that had been aged for 45 days, whch was rare, fatty, and salty, and some of the best beef I’ve had! We followed that with some Rkatsiteli Amber Wine, a nice dry farmhouse-style wine from 2018. 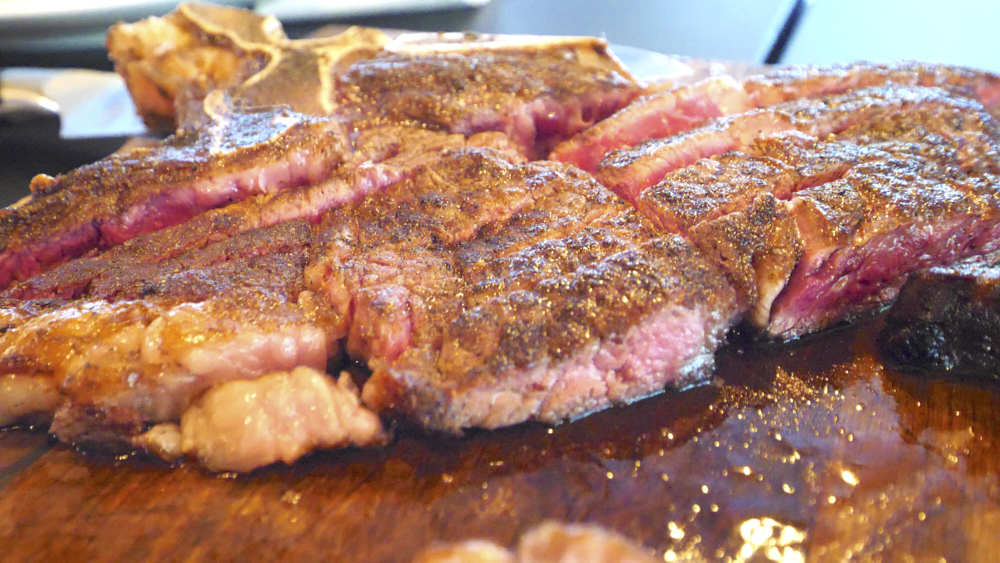 Next was sourdough bread with mozzarella-like sulguni cheese. Then, we tried some dense and herbal beef and pork khinkali. We followed that with some hard and salty sheep gouda cheese. It was so salty, I had to flush it down with some wine!

Check out the 20 Things You Must See and Do in Yerevan, Armenia

Back downstairs, I got to see their chicken eggs, quail eggs, honey, sausages, and more. Then, I visited the butcher, who was dismembering ribs and other pieces of the beef carcass. 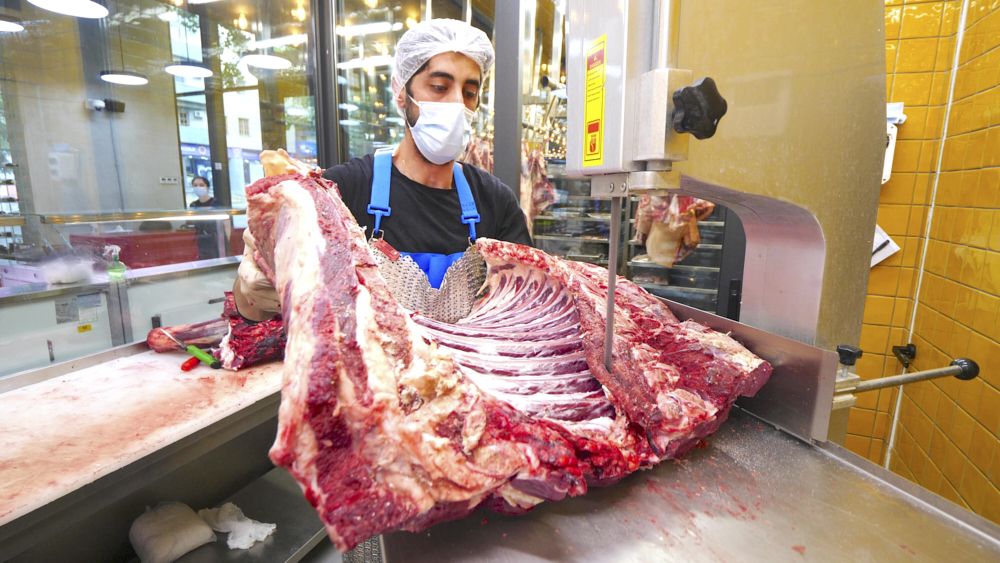 Next, we arrived at 2 Tona Brewery. It was an awesome microbrewery! I could see the mash tank filled with malt, yeast, hops, and water. They have 8 core beers, seasonal beers, and burgers. 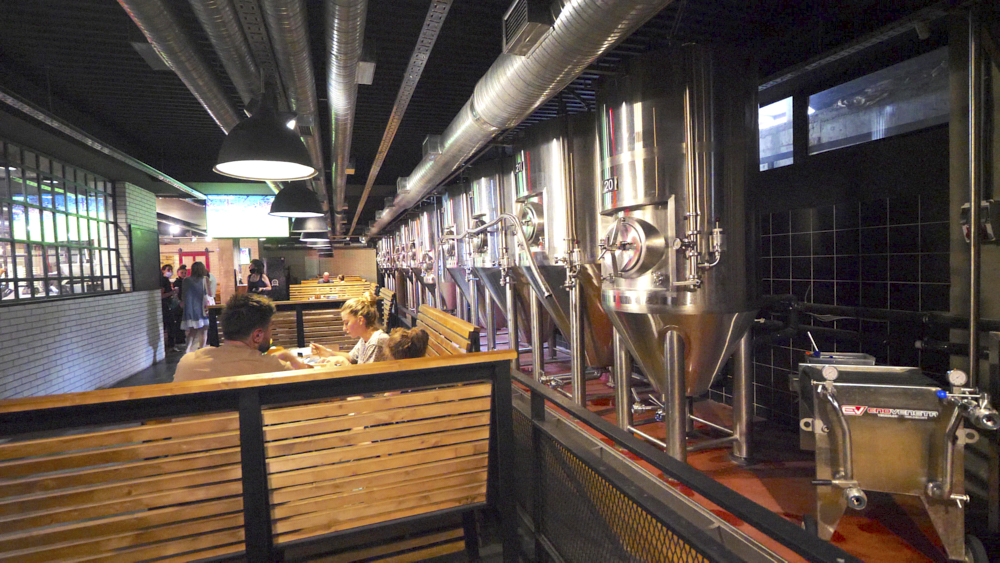 I went downstairs to the tanks and tried some beers straight from them. I started with a light, crafty Czech pilsner and a chocolatey stout with espresso flavor. Then, I watched them make a grass-fed beef burger, khinkali dough, and khachapuri! 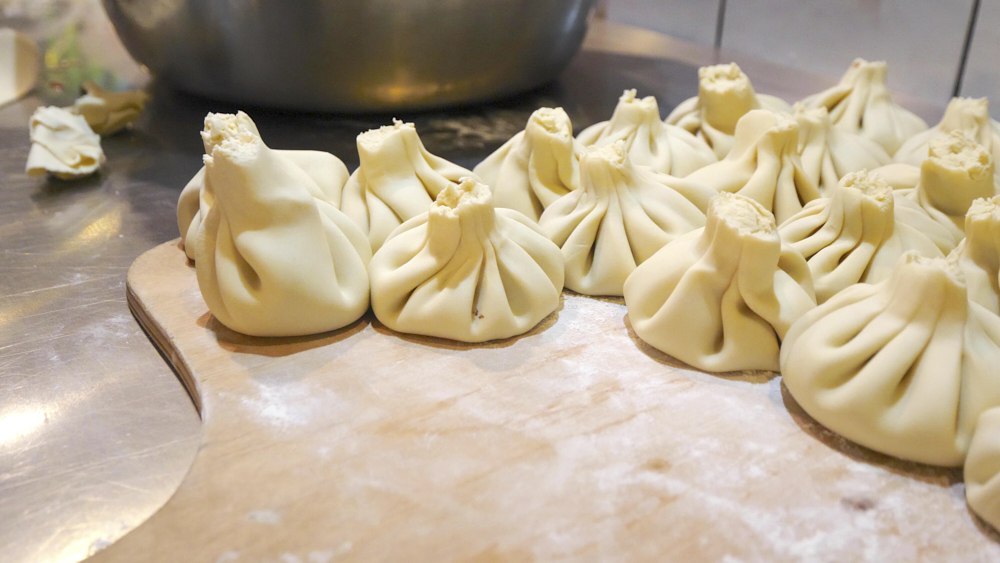 At our table, we enjoyed a plate of khinkali and a flight of beer. I started with some light and crisp barley wine (barley beer), followed by Helles (a fruity German beer), a crafty and light Vienna Lager, a citusy half IPA that was light on the hops, and a hoppier IPA.

Next, they brought me a honey ale, which I loved! It wasn’t very strong and I could really taste the honey. The khinkali contained beef, pork, and herbs, and the soup inside was really unique! 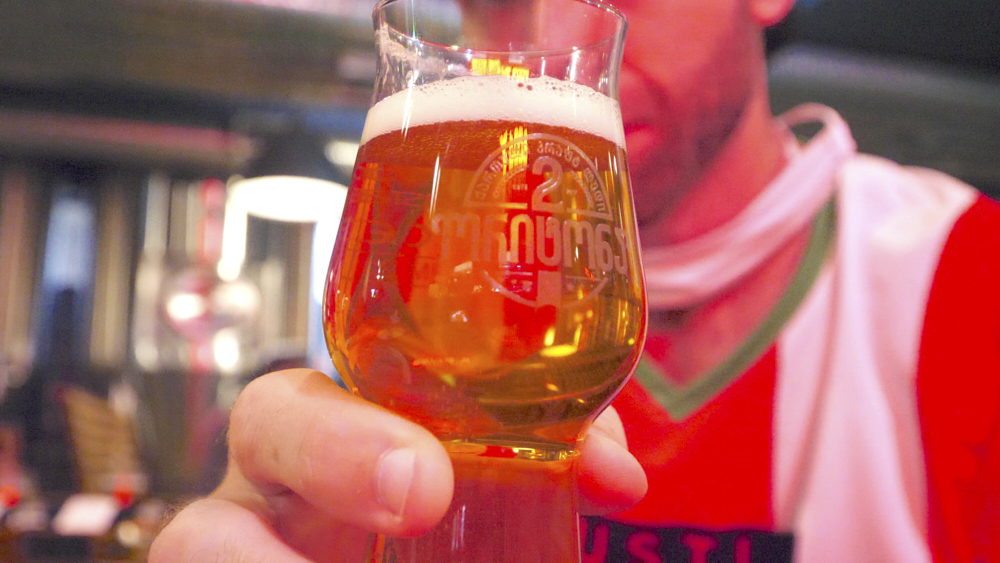 Then we jumped on the house special, chicken wings with a glazy chili sauce. They were hot! The other chili sauce that came with them was also really good! Finally, I washed them down with some honey ale and stout! 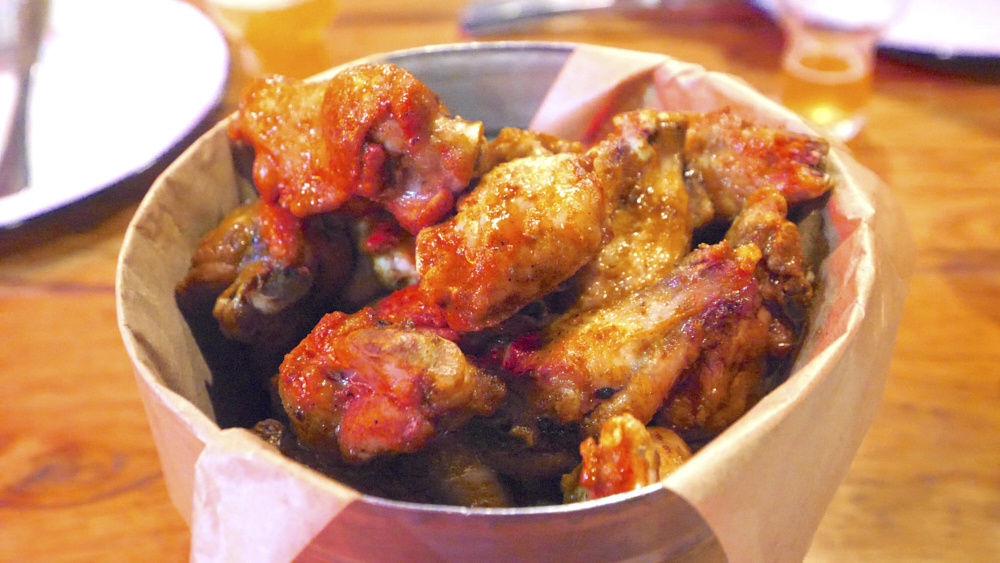 I hope you liked coming with me to try Georgian cheese and bread on my Tbilisi attractions tour in Georgia! If you did, please give this video a thumbs up and leave me a comment below. Also, please subscribe to my YouTube channel and click the notification bell so you don’t miss any of my upcoming travel/food adventures!