I have been road-tripping through Galicia for about a week now and I have to admit that even after all I heard about the seafood here, there have been many pleasant surprises along the way. Galicia is the north-westernmost region of Spain and features miles of pristine coastline. The chilly Atlantic waters around Galicia are renown for the gifts they provide.

Many of the tasty creatures fished along Galicia’s coast are not found anywhere else on Earth, making this region a unique gastronomic epicenter so I decided to tell you about the best seafood in Galicia to eat. It’s also worth a mention that Galicia’s reputation in food doesn’t end with mollusks. The region features Spain’s best beef, chicken and is the birthplace of the airy, refreshing Albariño white wine.

I want to share with you some of the best seafood in Galicia that I was fortunate enough to experience so far:

Mussels can be found throughout the world and have been eaten by people for centuries. I have tried steamed mussels in North America and France, fried mussels in Turkey, but Galician mussel recipes are simply phenomenal. Most common is the steamed variety. The mussels are kept alive until they are steamed to perfection and garnished with lemon wedges. 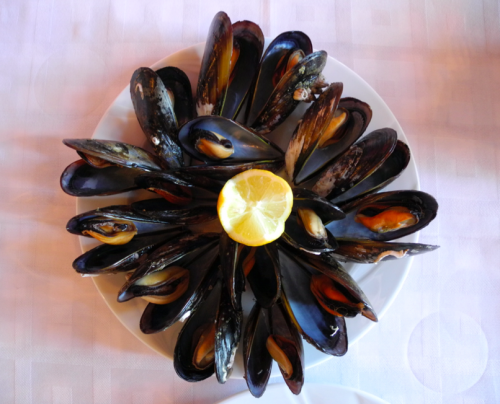 Another method of preparing mussels is to steam them, add raw onions, tomato and garlic and to serve them in half shells. This was an incredible and very refreshing dish I had in A Guarda. 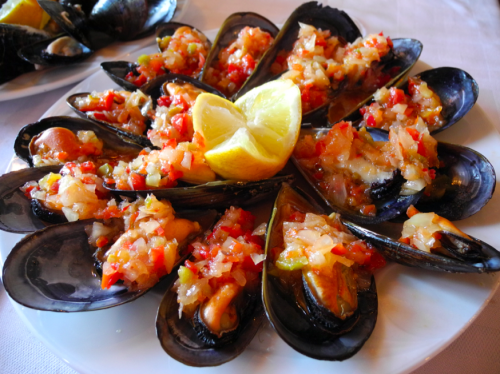 A third way of preparing mussels is also ideal for cocktail parties- to serve with toothpicks and watch them disappear in no time. In Vigo I had them steamed and then soaked in a mixture of olive oil, fresh garlic, laurel leaves and vinegar. Lip-smackingly good to say the least. 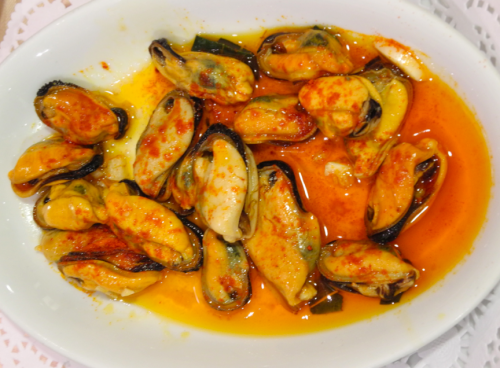 Unlike the white, round scallops commonly served across the world, Zamburiñas are tender, buttery scallops native to the cold Atlantic around Galicia. They are most often served steamed, but are also widely available baked in the shell. 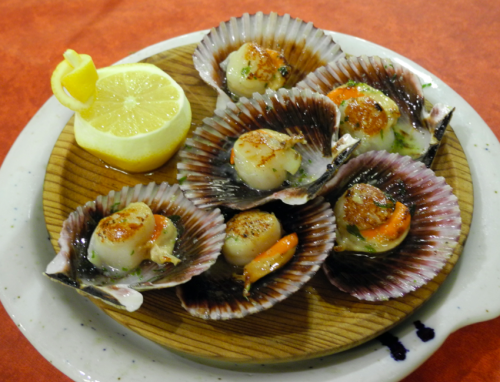 These clams are difficult to find and can inflict quite a bit of pain onto the person who unknowingly steps on one. Their razor sharp shells protect the clam from birds and fish. Inside the shell is a juicy and delicious meat that really needs no seasoning at all besides some lemon juice. Navajas may seem unattractive, but they are jam-packed with a delicate flavor unlike any other mollusk in the world. 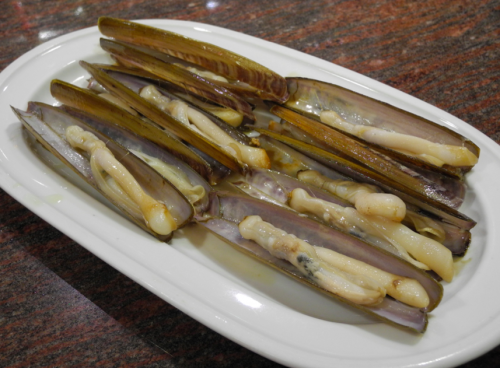 Oysters are some of the best seafood in Galicia to eat! There is a famous street in Vigo named Calle Pescaderia, or Fish Street. Here the tradition of shucking oysters for the public has been upheld for more than 100 years. The oysters are big, juicy, and super fresh. It is a tradition that must be experienced first hand. They are pricy though; a half dozen costs 7.50 Euros and a dozen costs 15 Euros. They are worth every penny and taste like a million bucks. 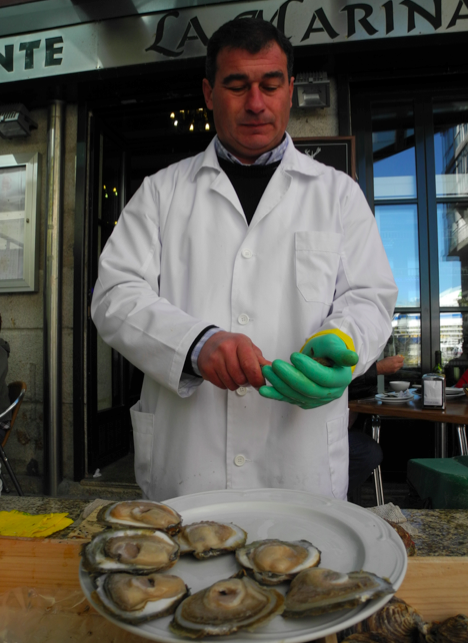 This hideous creature only lives in aguas braves, or “angry seas.” They only grow on the side of rocks in intertidal zones: AKA super-choppy waters. This is the only way they can absorb nutrients since they cannot swim. To harvest Percebes is a dangerous, often deadly task. Brave fishermen attach themselves with ropes to jagged rocks in order to scrape the barnacles off the rocks as the tide rolls out. Literally dangling by a thread, they catch as many as they can. This is why they are very expensive and sought-after. By snapping them in half, their tender purple-colored meat is exposed, which is the edible part of the animal. They literally taste like the sea and are a special treat for anyone fortunate enough to afford them. 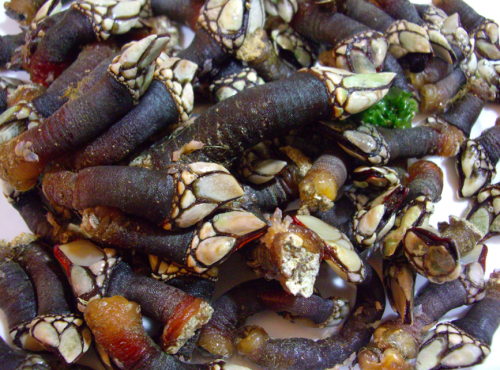 Last but not least is the almighty octopus. Octopus is served in countries across the globe, but Galician octopus, or Pulpo Gallego, is arguably the most exquisite way of preparing this eight-legged creature. It is also the most iconic of all Galician seafood plates. Classic Galician octopus is steamed and served atop boiled potato slices and dusted with paprika and sea salt. Octopus is served during holidays and festivals throughout Galicia. 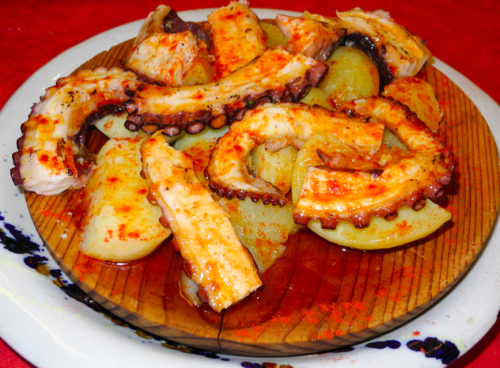 Galicians have also cleverly come up with another way of preparing octopus- carpaccio style. A seaside restaurant in Ourense serves thin, delicate slices of chilled octopus drizzled with olive oil and balsamic vinegar, and topped with chopped parsley. Talk about melt-in-your-mouth action! 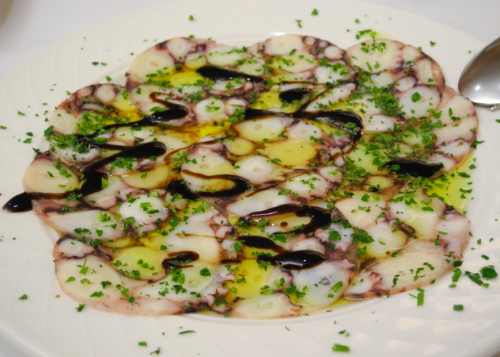 Whether it’s fried, sautéed, steamed, or raw, Galician seafood has proved to be in a class of its own. I have also tried various types of fish filets, breads stuffed with xoubas (sardines) and bacalao (cod fish), steamed prawns, boiled crab and more.. the Galician tradition in seafood is truly an amazing and timeless one. So the next time you’re thinking about visiting Spain, don’t overlook this spectacular region. Besides having some of the friendliest people I have ever met, Galicia sports some damn good sea treats that are not to be missed! 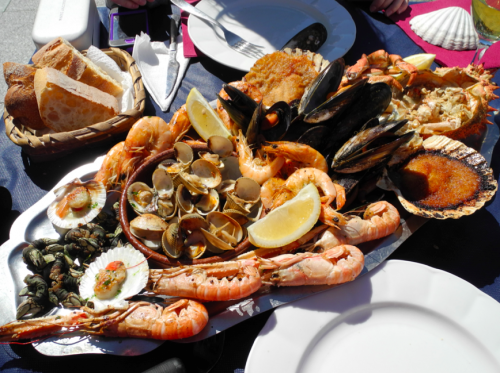 Oh, and I cannot forget to mention that every meal should be ended with a small shot or “chupito.” 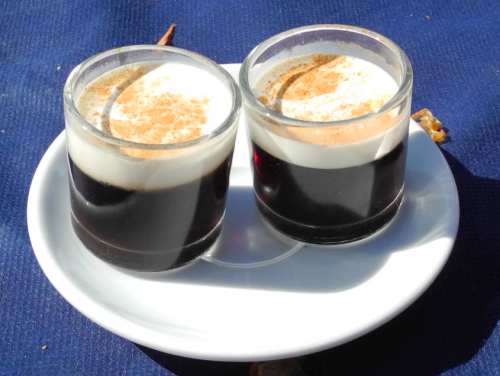 You know what they say, When in Spain…

What are your favorite seafood dishes from Spain? Leave us a comment below!

Special thanks to Turgalicia for helping make this trip possible.