When I traveled to Spain and Italy with my family in November of 2019, we had a blast exploring together. But during my time in Barcelona, I carved out some time to explore a traditional Catalan market with my friend Zoltan. Come along with me on my epic Spanish food tour at Mercat del Ninot in Barcelona, Catalunya, Spain! 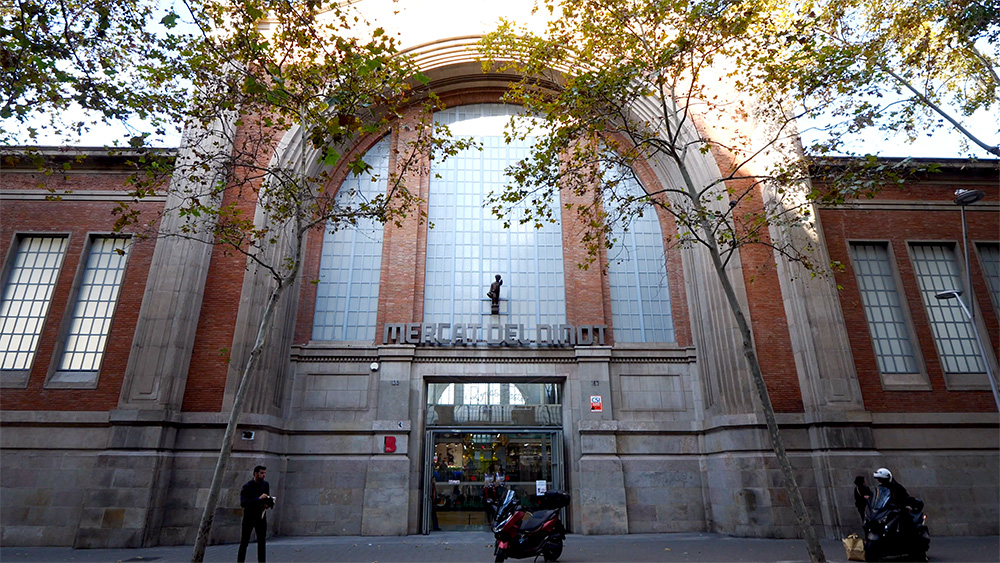 I began my Spanish food tour on a beautiful morning in Barcelona. I’d be exploring Mercat del Ninot, which is one of over three dozen markets in Barcelona. They have food stalls, fresh fruit and vegetable stands, and more. They’re all run by local Catalan families. Locals and restaurant owners come here to buy their groceries. It’s all farm-to-table! 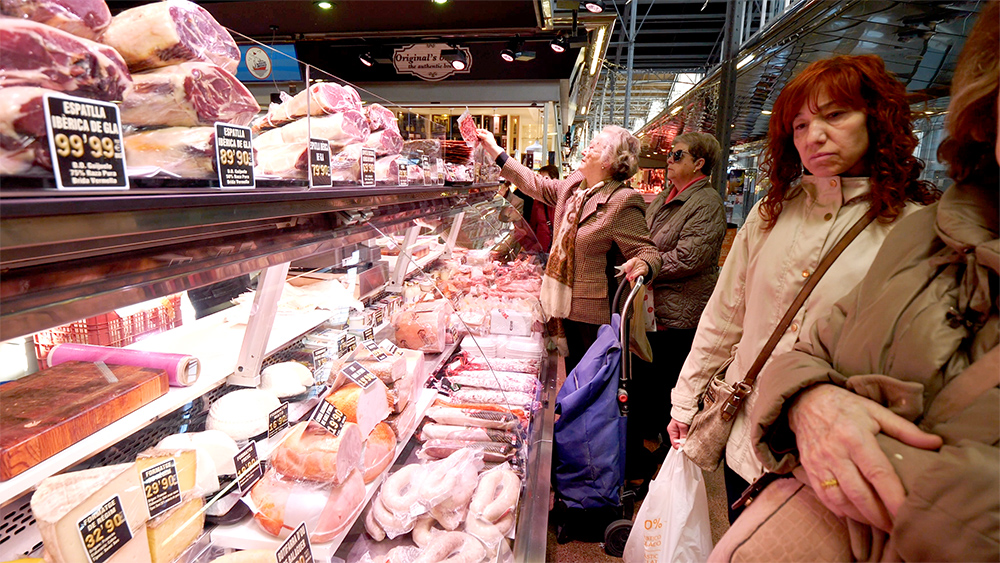 I’d be going on a 2.5-hour food tour with Food Lover Tour, a Spanish tour company that conducts tours in eight different cities. I was super excited! We’re going to go to five different spots, try 10-12 different tapas, and try some drinks as well! I couldn’t wait to start my Spanish food tour in Barcelona, Spain! 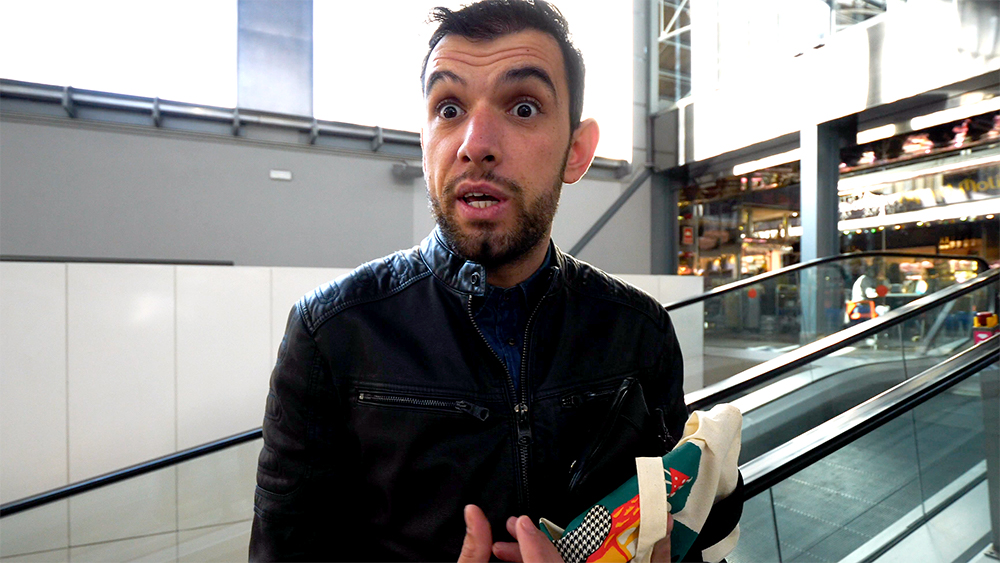 I met my tour guide, Zoltan, who took me inside to eat a popular breakfast item here, Spanish ham! All of the vendors who have ham sell six or seven different ones. Some are affordable, while others are really expensive. The difference is the quality, the origin of the pig, what the pigs eat while they’re alive, and how the meat is cured.

Check out The 20 Best Places to Visit in Barcelona

We started my Spanish food tour in Barcelona, Spain with some jamon iberico, or Iberian ham. It’s 100% pure pork. This pig ate acorns, so it was basically a vegan pig. The ham is very oily and fine cut. You eat it with Manchego cheese, which is so good. It’s actually what I had for breakfast earlier that morning, except this was better! I could really taste the difference between the good quality and the lesser quality. I also loved the thin cut! 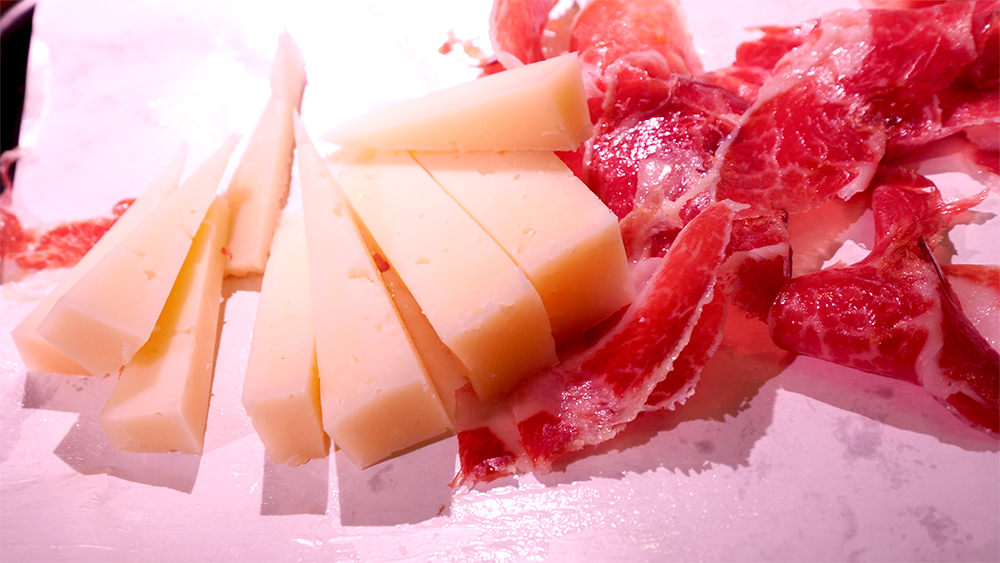 They gave me a lot of Manchego cheese, which is the traditional Spanish cheese from Castillo La Mancha, north of Madrid. It’s thick, salty, and dense, and is traditionally made with cow milk, but now they mix in goat and sheep milk as well. 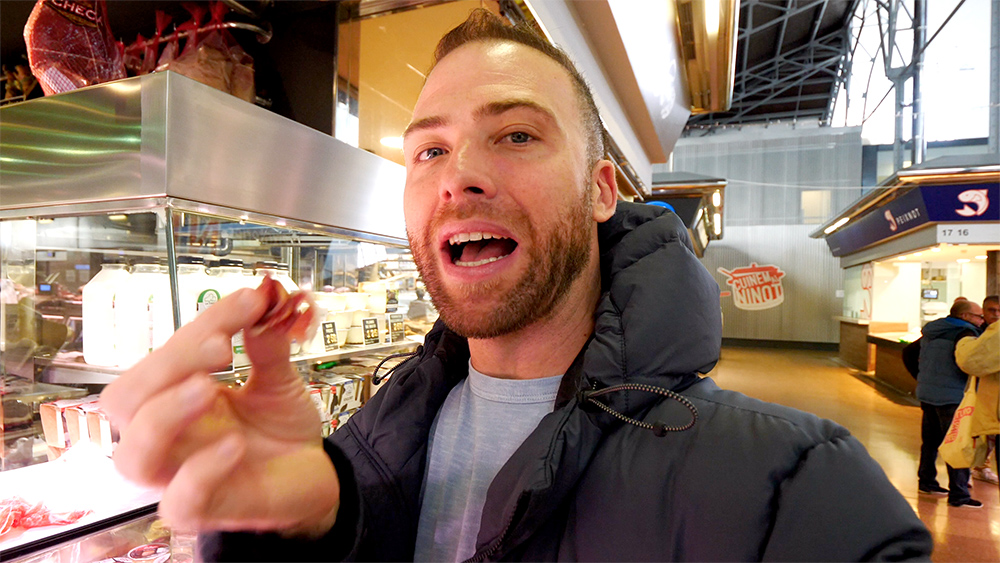 Then, Zoltan told me about how the different booths have the family names on them. This way, customers know the origins of each place they visit, which is better for business. He took me to Ribera, which has been in service for four generations. This family has their own boat, so they don’t have to buy fish from the fish market. 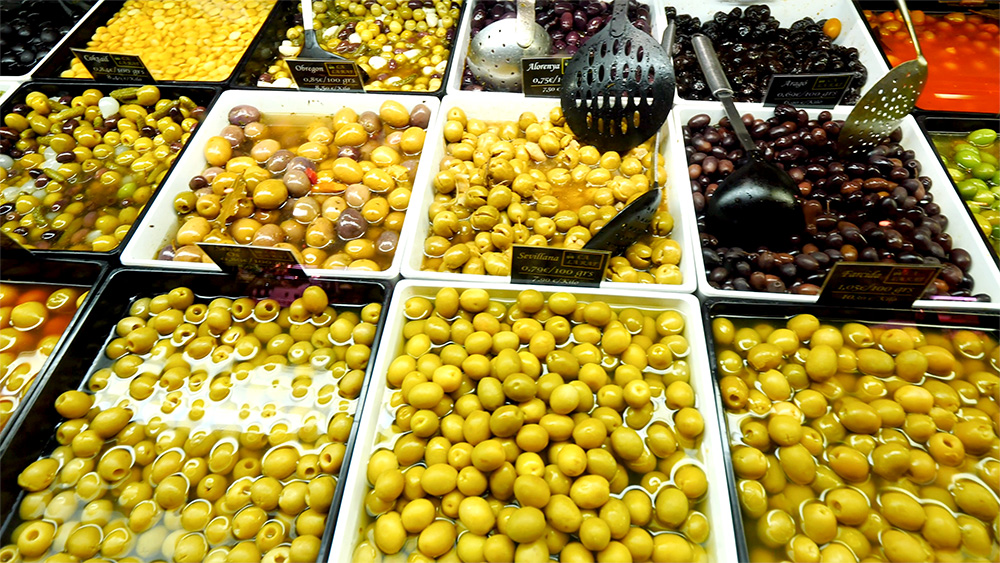 Here, they buy olives from different parts of Spain. There are over 260 types of olive in total, and this family sells at least 20 or 30 varieties. They’re all different colors and range in heat level and flavor! They put them in different sauces and juices to marinate them in different ways. They also sell lots of olive oils! Spain is the #1 producer of olives in the world!

Check out the Top 10 Best Restaurants in Barcelona

We got some olives and then headed to Bar el David del Ninot, which sells pulpo (octopus), callos (intestines), caracoles (snails) with chorizo, and more. First, I tried our olives, which were a little spicy and bitter. They’re very oily and even the small ones had a lot of flesh on them. The darker ones are so good and have a lot more flavor. They’re bursting with oil! 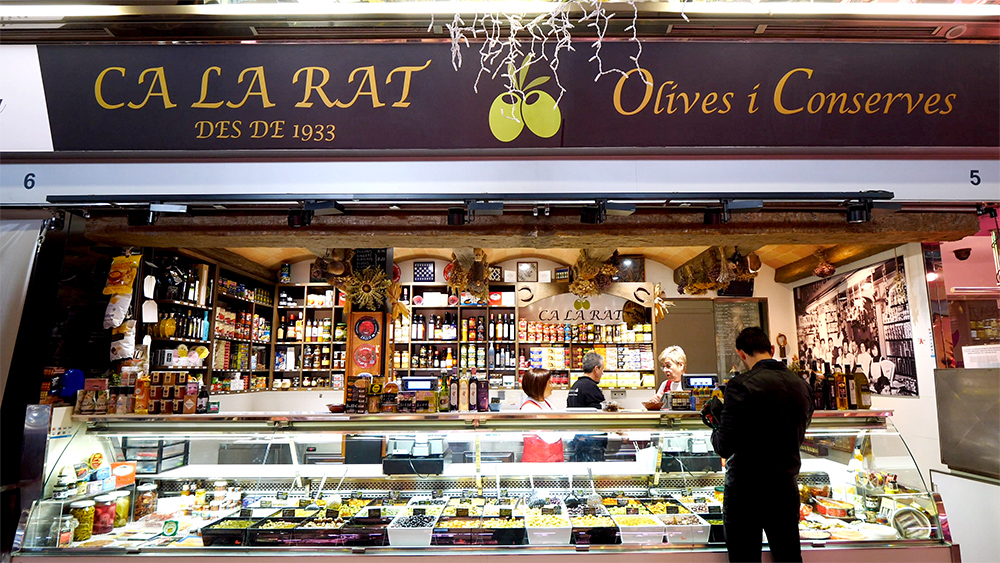 Most Spanish olives come from Andalusia, which is the hottest part of the country. I tried another that was so huge, it was like a meal in itself. Some of them are oilier and meatier than others, but they’re all super tasty! You usually eat olives before your meal! 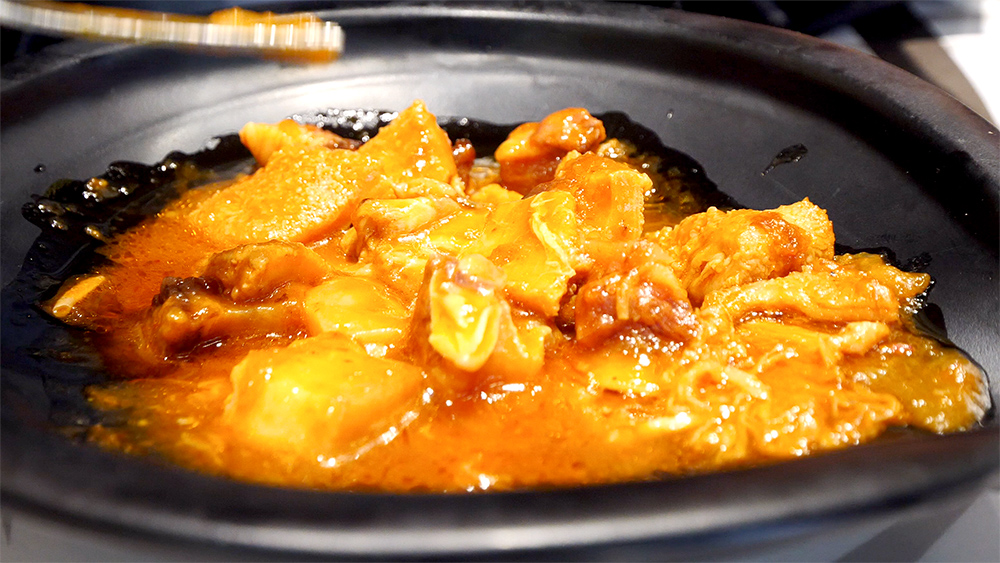 Then, I went for the callos, which was nice and fatty. I loved the mix of intestines, stomach, chorizo, and other pork meat. It’s a hearty winter stew, and they eat it in places like Hungary and Romania. Of course, I was about to eat some right there on my Spanish food tour in Barcelona, Spain! 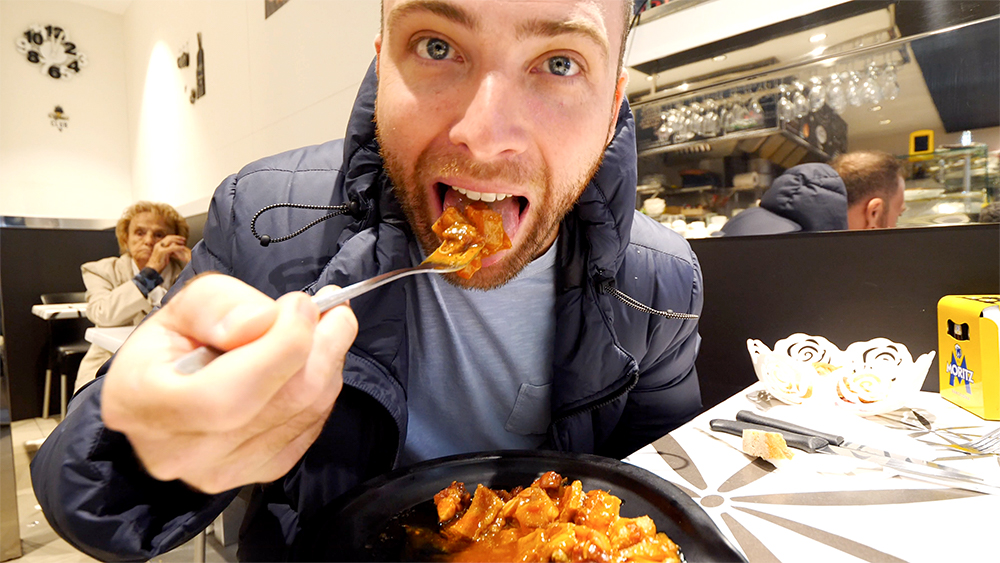 I suggest soaking some bread in the sauce and get a nice mix of the juices and fat. I love organ meat. It’s always super flavorful, fatty, and gelatinous. It’s great hangover food because of the fat! They needed to eat lots of fatty foods like this back in the day to give them energy to do strenuous work outdoors in the winter.

Then, we tried some wine from Terra Alta in Catalunya. It’s made from smooth, soft Mediterranean grapes that have hints of berries and forest fruits. 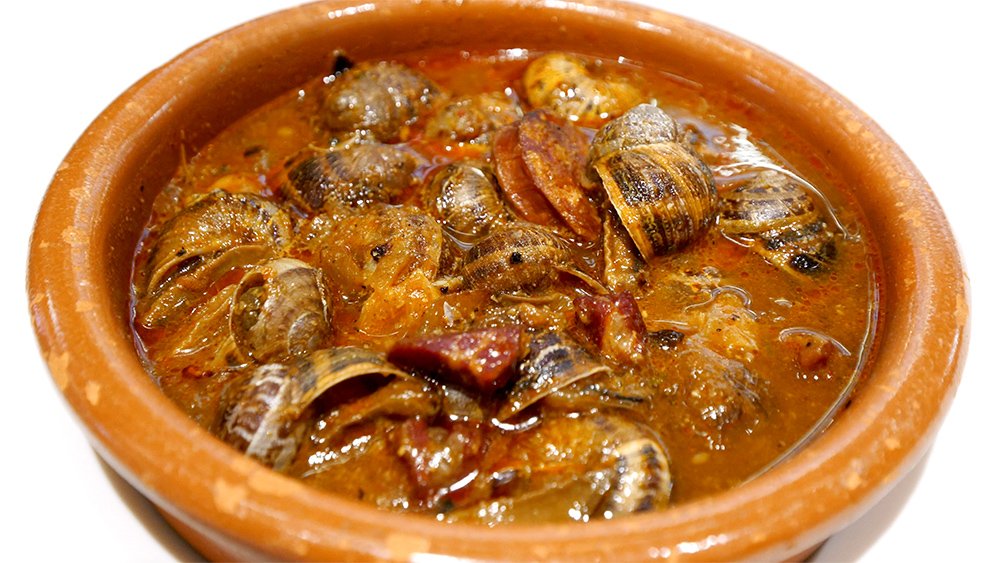 After that, I moved on to the caracoles, which you pull out of the shells with a toothpick. They come in a sauce that also contains chorizo. You’re supposed to eat them together, like a combination of land and sea. The flavors contrast really well. I loved the combination of the hearty meat with the soft, spongy snails. They’re so tasty and super fresh! The textures are amazing! 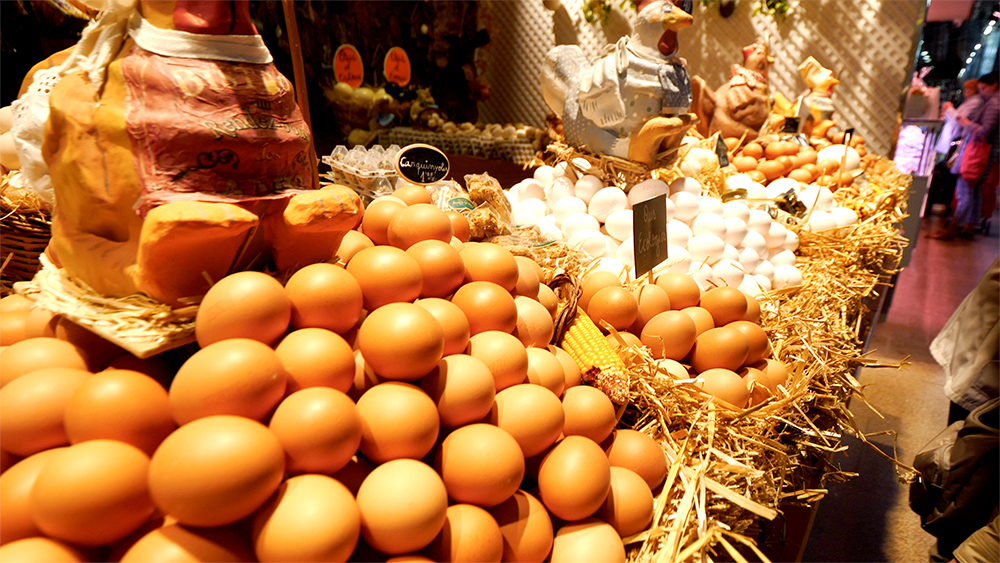 After that, we headed to Ous de Calaf. The vendor is from a town called Calaf, which focuses on eggs. You can buy chicken, goose, quail, emu, and ostrich eggs! You can feed your whole family with the emu and ostrich eggs. The ostrich eggs were so hard and can hold up to 100 kilos of weight! There, they even use the ostrich eggshells as planters for plants! I had never seen anything like this! 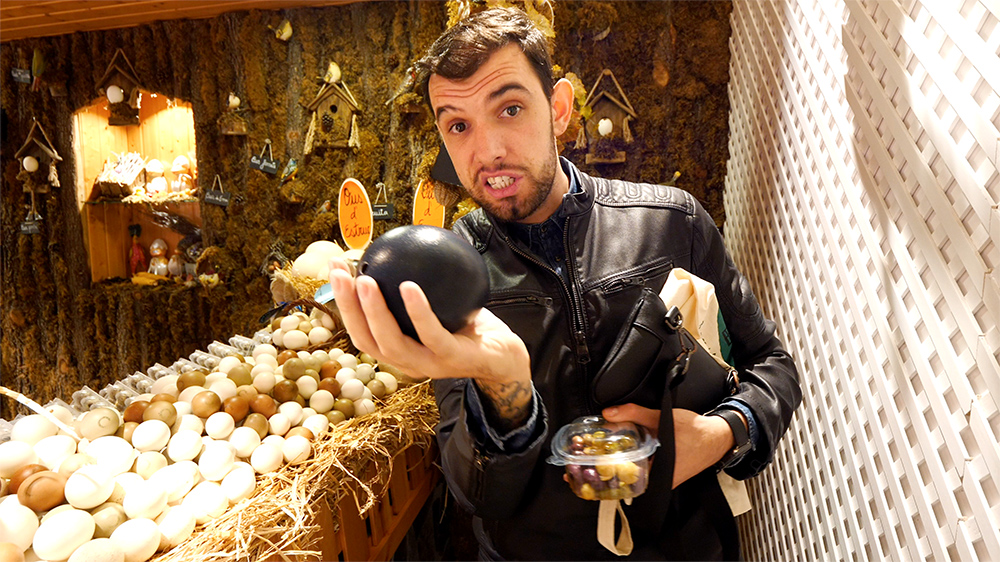 As we continued on through the market, we saw lots of fruit and vegetable vendors. I could see lots of mushrooms. There are over 500 varieties of mushroom in Spain, and these were some of the most expensive kinds. They looked so amazing! You can eat them grilled with a green sauce, and there’s another kind that you can shave over poached eggs.

Check out my VIDEO: The Best of Barcelona: Restaurant Los Caracoles

These markets are seasonal, so you won’t find anything that’s out-of-season at any of them. They like to stick with the freshest ingredients. We approached more seafood. The seafood is also all super fresh and is never frozen. The great thing about this Spanish food tour in Barcelona, Spain is that it is truly an authentic look at local life. 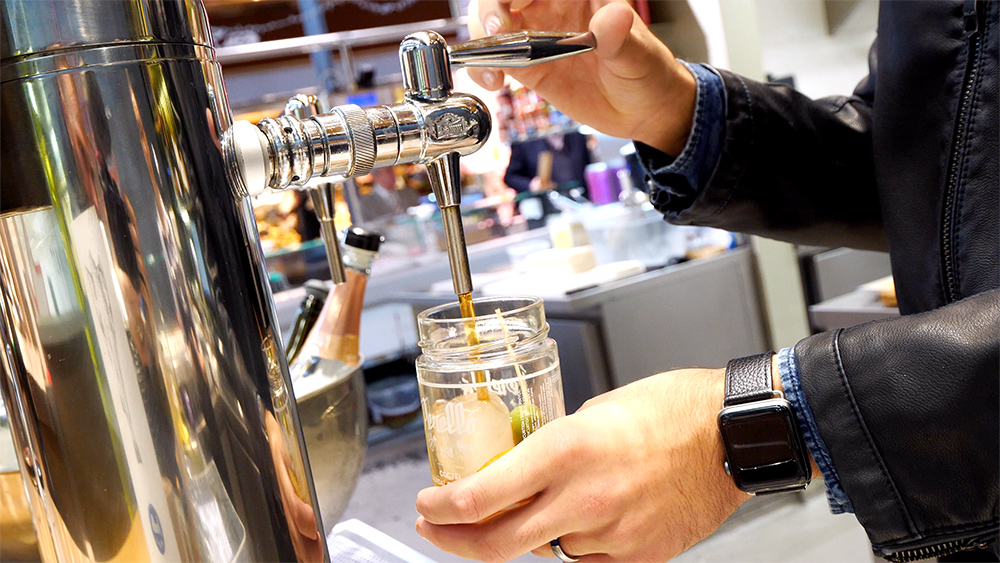 Then, Zoltan took me to Bacallaneria Perelló, which has been in business since 1898! They were one of the first vendors at Mercat del Ninot after it opened in 1893. They sell bacalao (cod fish) and lots of other yummy-looking seafood! 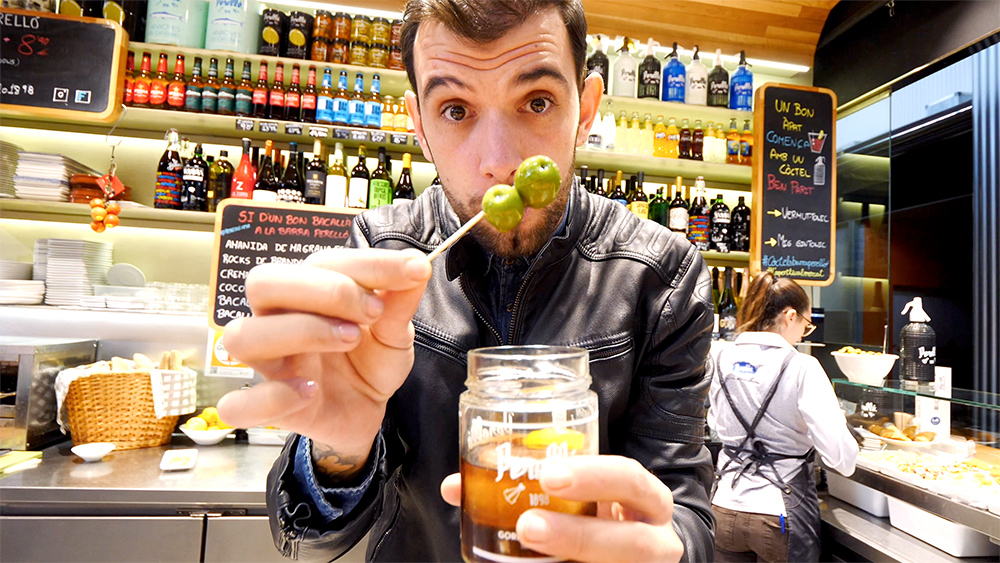 Zoltan got me some vermouth, which is white wine put in barrels with botanicals and local herbs. It’s also served with orange and olives for a more Mediterranean flavor. It used to be served as a medicine! It tasted like sangria, but with a bit of a medicinal flavor. I could taste the herbs in it. The olives inside had absorbed the vermouth! 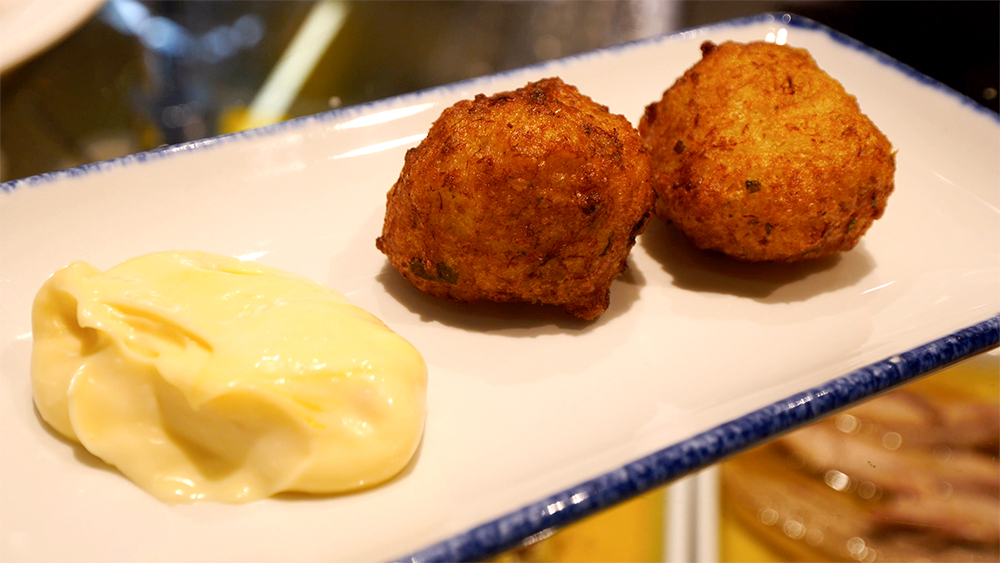 Then, we got a salad with cod fish, tomatoes, peppers, and olives. We also had some cod fish fritters with a garlic mayo, white anchovies with orange zest and olive oil, and pan tomaca (toasted bread with tomato and olive oil). 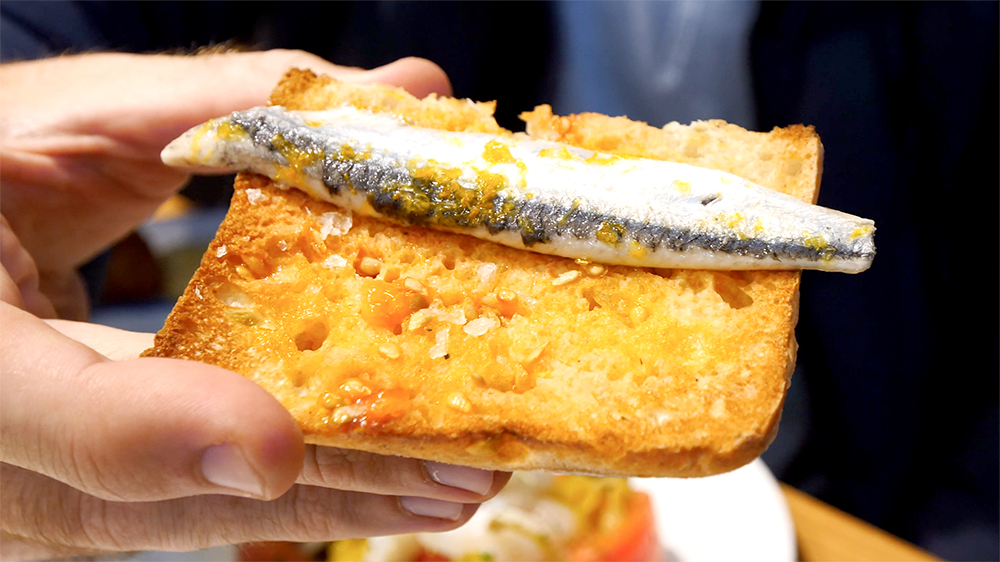 I started with the pan tomaca and put an anchovy on top. From the very first bite, I got a delicious burst of tomato in the bread, and the cold sardine with lemon, lime, and orange added such a different and delicious flavor. I dipped the bread in the oil, which was too good! 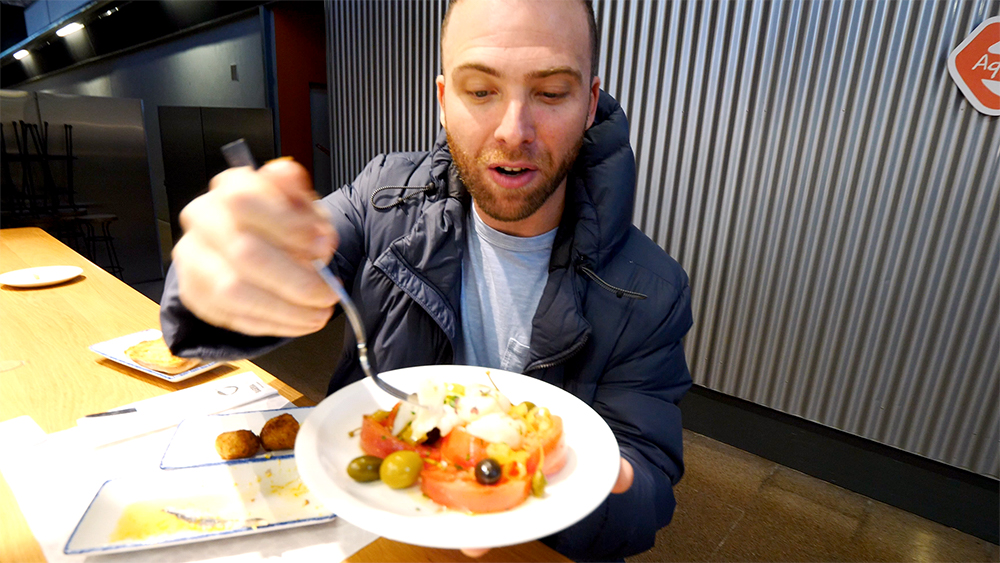 Then , I went back to the bacalao salad. The fish was so good, especially with the fresh tomatoes. We got some cava, or Catalan sparkling wine. It’s popular during lunch and dinner, because the bubbles make people happy. It was very bubbly and fruity! Barcelona is just 40 minutes away from the cava capital of Spain, Sant Sadurní d’Anoia. 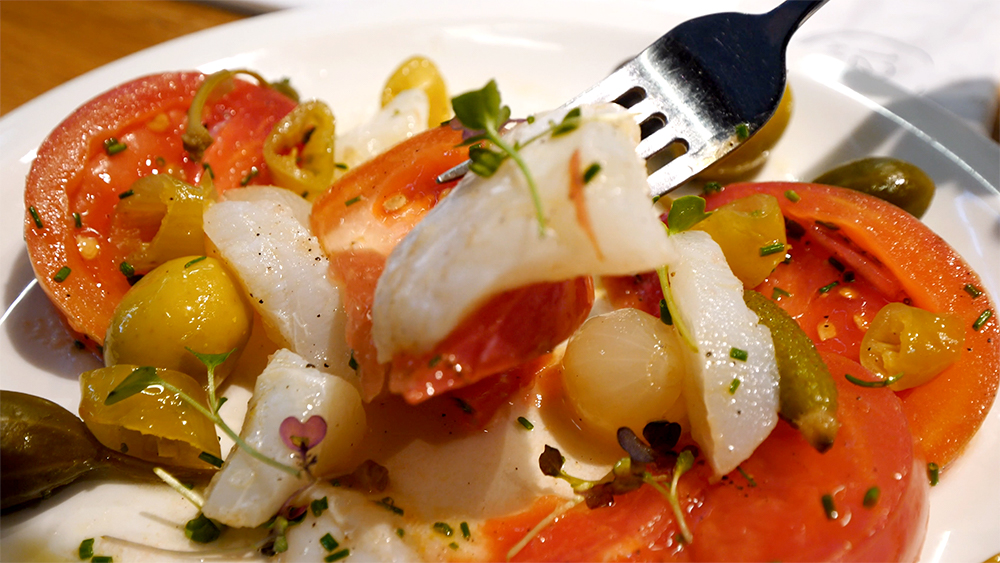 Then, I ate my last anchovy. The combination of oil, lime, lemon, and orange was unreal! 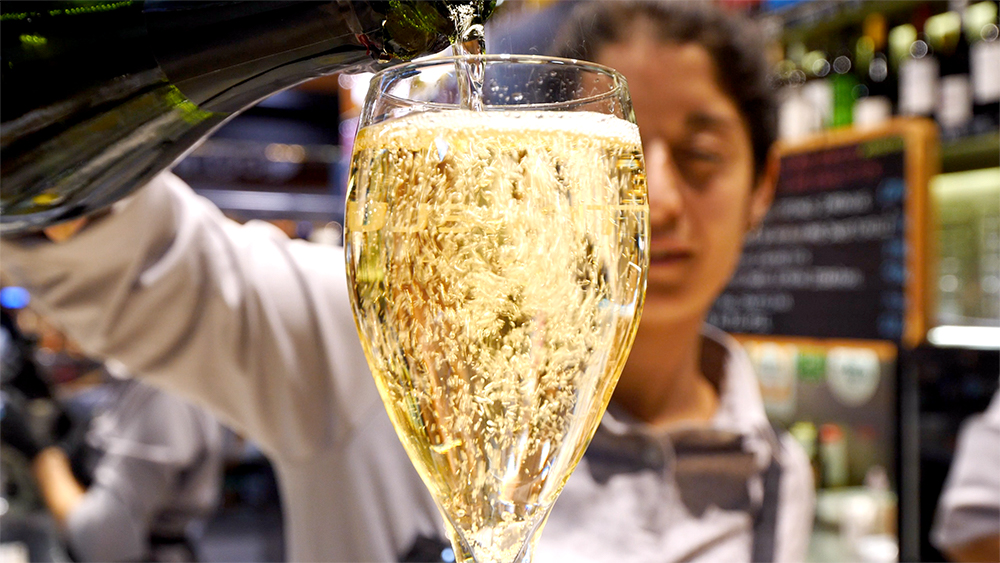 After that, we got some grilled octopus from Spain. It looked incredible and tasted amazing. I love the grilled charcoal flavor on the outside. The inside was super buttery and tender. It’s my favorite dish in Spain! The ends of the tentacles is the best part! I used to eat the pulpo in Galicia every day! This Spanish food tour in Barcelona, Spain was taking me back to flavors I enjoyed back when I lived in Spain for almost two years! 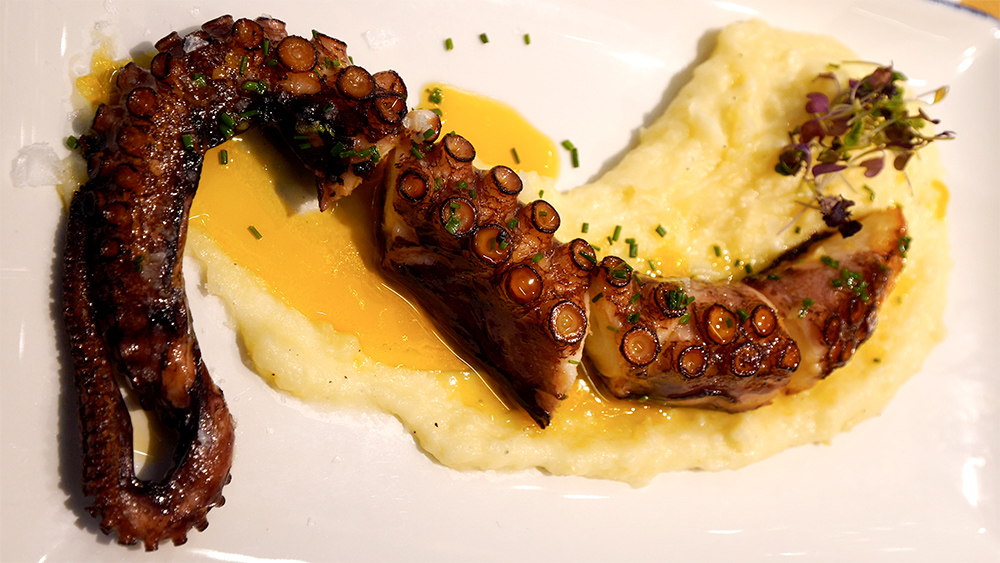 Then, we continued on to see some de-boned steak, which is cured meat. The origin of the meat, and what it was fed with, are the most important things to consider. Zoltan explained to me all about how it’s made.

We continued on and got some chucho, which are flaky, cylindrical pastries stuffed with cream. They come from the province of Girona in Catalunya and are decadent and delicious! The sugar on top and the burst of cream were incredible. They were almost like a churro, but the filling is different! And they only cost 1.50 €. We enjoyed them with some cava. What an incredible way to end our food tour! 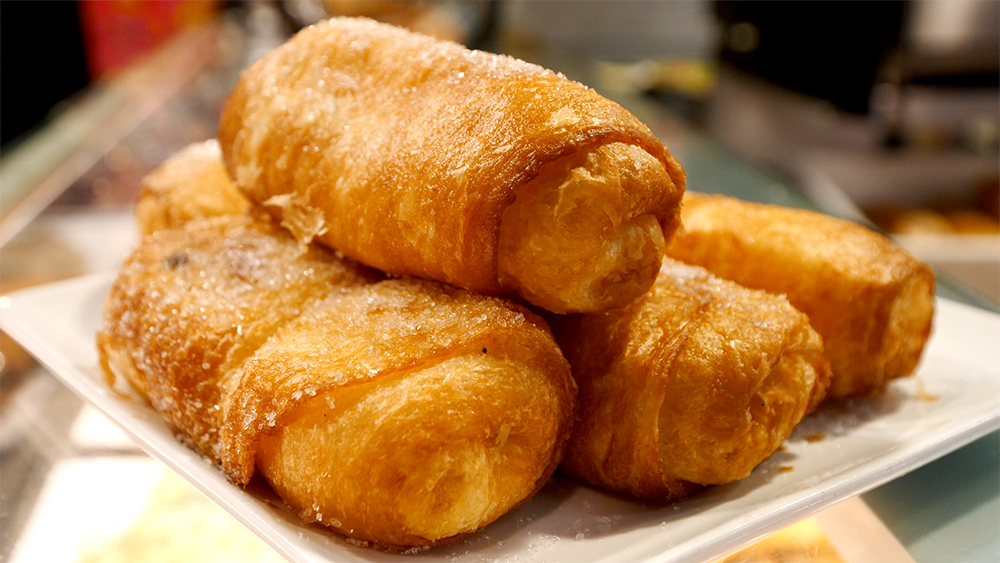 This place is super local and authentic. I hadn’t seen another tourist there at all. It was just locals with their friends and families! This is the type of tour you want to do when you travel. Something that’s authentic and local and takes you where the locals go. 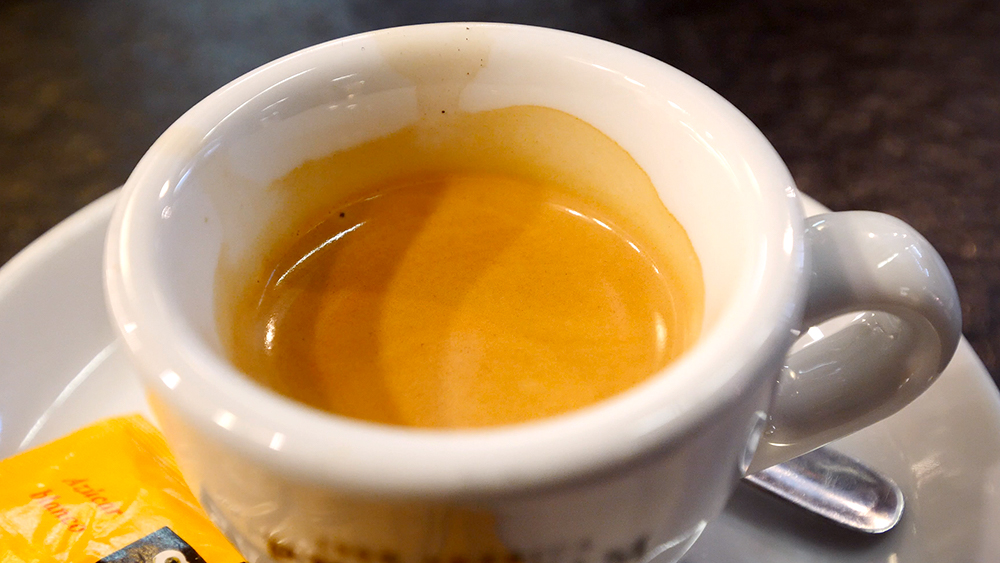 If you would like to book your own Barcelona Local Food Market Tour, click here! Trust me, this Spanish food tour in Barcelona, Spain should not be missed. 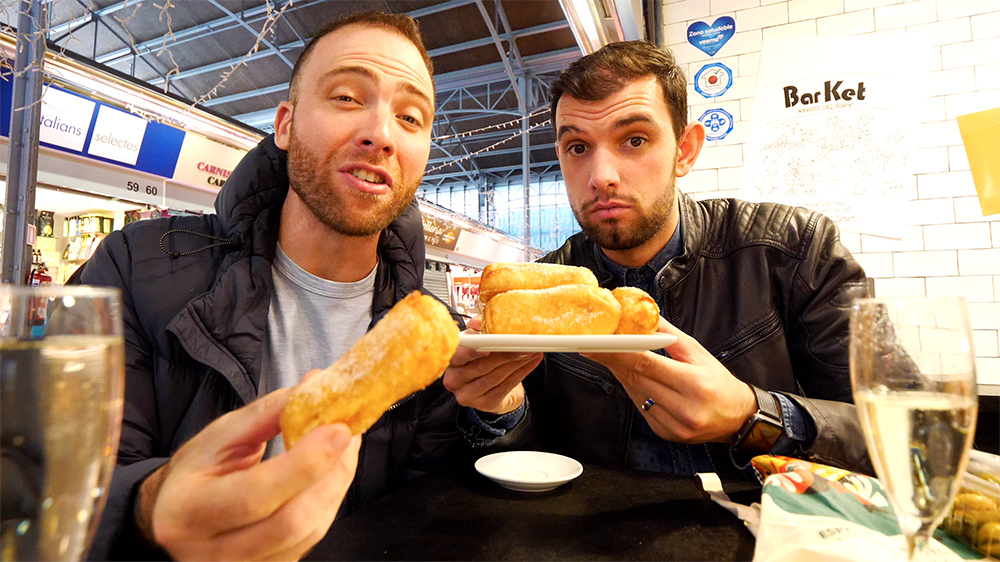 I hope you enjoyed coming with me on my Spanish food tour at Mercat del Ninot in Barcelona, Spain! If you did, please give this video a thumbs up and leave a comment below. Also, please subscribe to my YouTube channel and click the notification bell so you don’t miss any of my travel/food adventures!