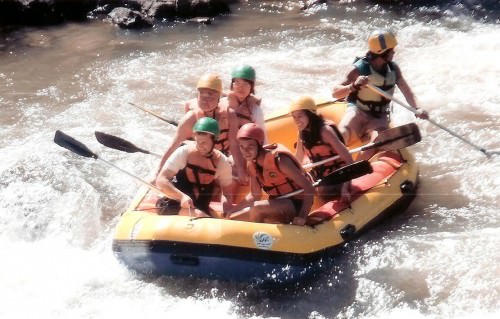 “I hope you remember this,” the cheerful whitewater rafting instructor said in a Thai accent.

I hope I remember it, too. I was on a two-day adventure hike in the mountains of Thailand and this was the last adventure my dozen fellow trekkers and I were encountering: river rafting in Thailand – both whitewater and bamboo. The whitewater rafting was up first.

The instructor had just demonstrated how to dive to one side when our raft guide commands us to so we don’t fall out of the raft. And for the fifth time, told us he hoped we remembered what he was telling us.

I secured my lifejacket tighter and looked towards the murky, brown, and rapidly moving water a short distance away down a small hill. Overlapping green shades of the trees was prevalent on both sides of the river bank, thick and lush; demonstrating our remoteness in these mountains outside of Chiang Mai.

“Don’t worry. You very unlucky if you fall in,” the instructor added.

A minute later at the instructor’s direction and after what I thought was a much too short tutorial, I began heading down a trail made through the riverside brush alongside my five rafting buddies: my fiancé, a guy from Croatia I had become quick friends with on the trek, and a middle-aged Japanese couple. None of us had been white water rafting before except me – and that had been 15 years ago.

We reached the raft and climbed in as a weathered-looking man who looked to be Thailand’s answer to Rambo held the raft steady against some rocks. He looked tough and ready to guide us through the rapids. I felt momentarily soothed.

My leg plopped into the ice water as I climbed into the raft and I shivered despite the 85 degree weather. I definitely did not want to be the unlucky one who falls in.

As it turned out, I didn’t need to worry about that until the bamboo rafting part of the adventure came along.

But first, I learned a few important things about whitewater rafting in Thailand:

I was just getting my bearings for all the whitewater rafting commands and the rhythm of the river when it was time for bamboo rafting. “Back!” the guide yelled and my fellow rafters and I began furiously pedaling backward as he guided from the rear to lead us to the side of the river.

The whitewater rafting was over. But as I was about to learn, the chaos was just beginning.

“Out. On there,” our guide commanded and pointed to a sturdy looking raft being held in place by a teen boy who was kneeling on a skinny dock. He let go of it as we floated closer and our guide maneuvered the raft so we were aside it and he could grab it.

“We just climb from this raft onto that raft?” I asked doubtfully, looking down at the bamboo platform. The bamboo raft no longer looked that sturdy. He gestured again that we should climb onto it. I was the third to venture down. By that time the bamboo raft was already submerged about six inches under the water.

Apparently, it was not made to hold a lot of weight. The remaining two people climbed on and we sunk a bit lower, completely submerging my feet, ankles, and butt.

And that’s when the rocking happened.

“Everyone hold still,” my fiancé commanded loudly through gritted teeth as he clutched the sides of the raft tightly.

We all tried not to move, but to no avail. We began veering dangerously to the right.

“Tilt to the left! To the left!” our Croatian friend shouted from the front of the raft. We all did and for one second we thought we were safe and then…the raft toppled over and all five of us took a splash into the cold water, which came up to my shoulders.

Sputtering out water, we all stared at our guide, still safe on his whitewater raft. His face was amused and he gestured for us to get back on. “Really?” I muttered. I was starting to think this thing wasn’t made for five people.

We all heaved ourselves back on the raft – which was quite a feat in itself – and this time we were able to keep it afloat. Our guide, still on his nice semi-dry whitewater raft, floated behind us as we careened down the river still sitting – none of us dared to stand; not wanting to be the one to cause everyone to fall back in the river – and still submerged in water. I was very happy I listened about leaving my camera behind. 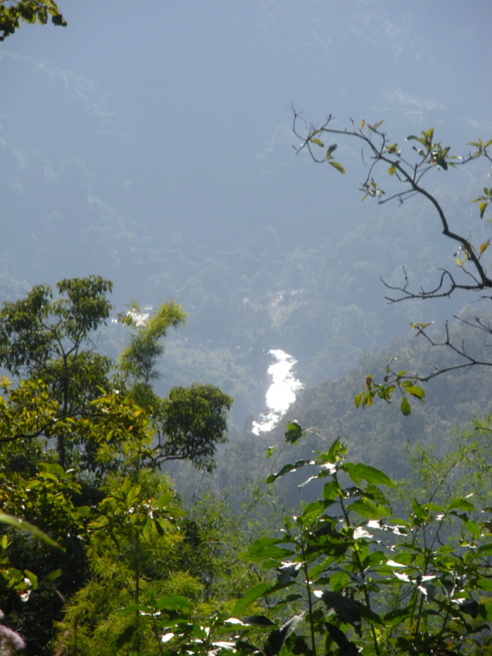 My bamboo rafting experience was surprising and memorable and here are some takeaways I got from it:

Have you ever been river rafting in Thailand? Tell us about what you thought about it! Leave a comment below.

To learn more about Gina and her travels please visit her website One Day in a City.