Madrid boasts a plethora of things to see and do, but getting out of the city will reveal the country’s storied past and charming towns. After traveling to Spain several times over the last 15 years, I’ve had the opportunity to explore beyond the big cities. Here is my list of top day trips from Madrid with some highlights and practical advice for each destination, plus a few episodes from my web show.

Also check out my article: 13 Things to See and Do in Madrid 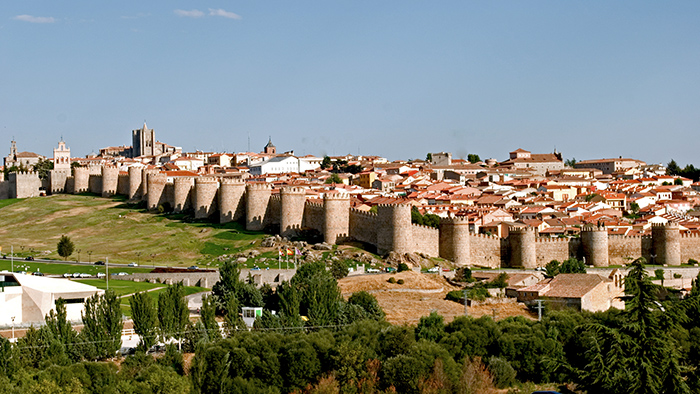 Ávila, also known as Ávila de los Caballeros, Ávila del Rey, and Ávila de los Leales, is a historic city located in the Autonomous Community of Castile and Leon, and just an hour and a half train ride from Madrid. The main entrance to the city is at the historical Gate of Alcazar. The city is also famously known for its well-preserved medieval city walls.

When you arrive and see these walls in person, you will be astounded at their complete lack of decay; they are almost entirely intact. Like the walls in Lugo, Spain, Ávila’s fortress-like walls are truly something amazing to behold, and just one reason to make a day trip over to this incredible city. 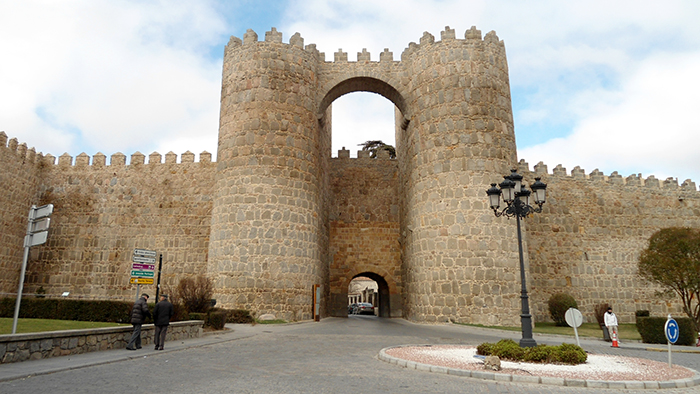 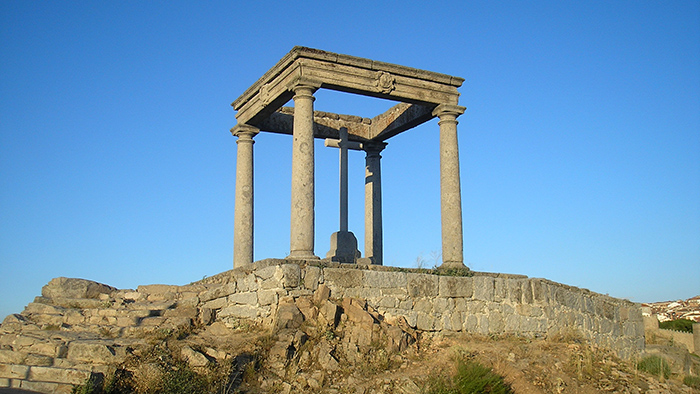 Walk along the walls and take advantage of the certain areas where you can actually get up and see the city from a different vantage point. When in Ávila you must try yemas de Santa Teresa. This is a traditional dessert, which consists of egg yolk mixed with sugar, is one of the most delectable pastries in Spain. 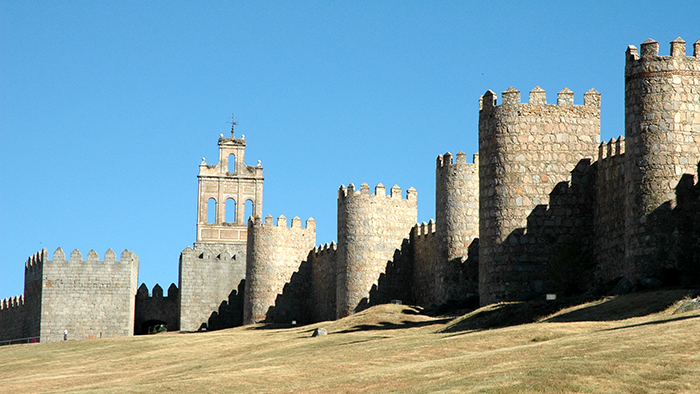 One of Ávila’s oldest and most iconic eateries is Meson del Rastro, which sits in the heart of town in the Plaza del Rastro. It is best place in town for meat, meat and more meat! Vegetarians probably wouldn’t find the mounted boar and deer heads too appealing, but they are all part of the rustic atmosphere of Meson del Rastro. At more than 100 years old, the restaurant has perfected the art of hearty cooking.

Homemade sausage, succulent steaks, lip-smacking stews and filling soups comprise the menu. This is the type of place where a bottle of red wine is 100% appropriate. Our personal favorite was the sautéed lamb dish. Once you’re done with your meal, remember to ask to be taken to the rooftop for a scenic view of the Ávila Wall. 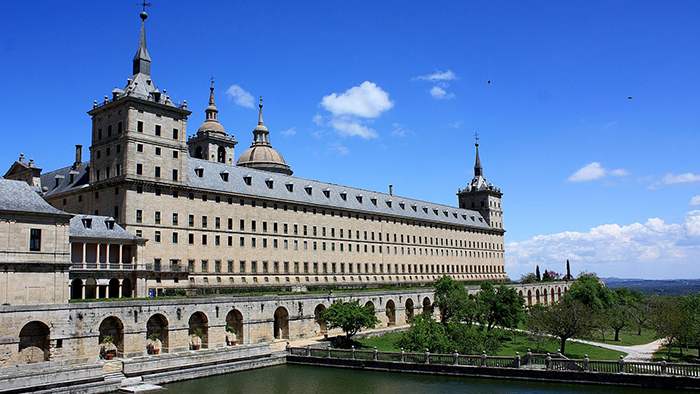 Within the community of Madrid, only 45 kilometers from the capital, is El Escorial, the residence of the King of Spain. Located in the town of San Lorenzo de El Escorial, El Escorial is only a 30-minute train ride away from Madrid, and functions as a school, monastery, museum and royal palace.

Inside the monastery of San Lorenzo, you can find the crypts of many Spanish kings beginning with Charles I, who died in 1556, all the way to Alfonso XIII, who died in 1931. Here you will also find Philip II, Philip III, Philip IV, Charles II, Louis I, Charles III, Charles IV, Ferdinand VII, Isabel II and Alfonso XII. Near the monastery is Valle de los Caidos, a monumental site dedicated to the Spanish dictator, General Franco, who is buried here along with 40,000 soldiers who lost their lives during his reign. To arrive at this memorial, you’ll need to take bus #660 from El Escorial, which leaves every 30 minutes. 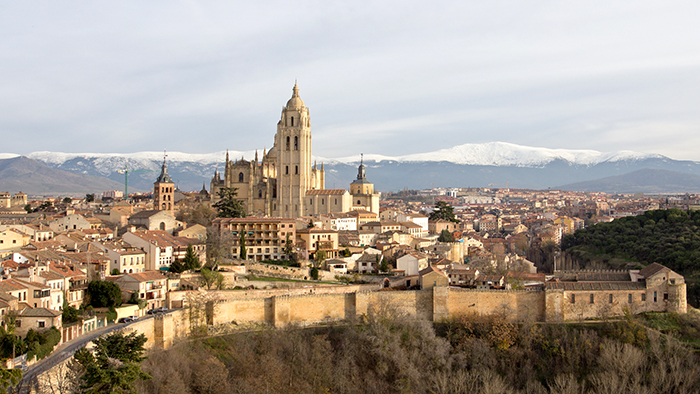 Segovia is one of nine provinces that make up the Autonomous Community of Castile and Leon. Neighbored by Burgos, Ávila, Madrid, and Soria, Segovia makes for a perfect day trip from any one of these cities. Getting from Madrid to Segovia is quite simple. The fastest, easiest way is to take the AVE high-speed train, which takes roughly about 30 minutes and usually costs only €10. You can also reach Segovia by car. The drive allows you to see more Spanish countryside and only takes about an hour and 15 minutes to drive the 90 kilometers distance from Madrid to Segovia.

Once you arrive, your first stop should be to see the impressive Roman Aqueduct. It is located in Plaza del Azoguejo. It is the city’s centerpiece, and also happens to be the best-preserved aqueduct in the world! The next must do is to have a traditional cochinillo meal at Meson de Candido (see Restaurants section). Once you’ve finished with lunch, make your way to Alcazar of Segovia. 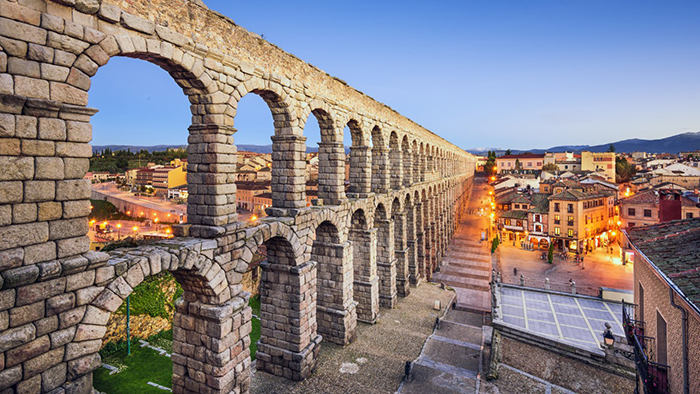 This royal palace sits atop a hill between the Clamores and Eresma rivers. It once housed the kings of Castile, but now serves as home to the General Militar de Segovia Archive and Museum of the Royal School of Artillery. The final must-see attraction of Segovia is its cathedral, which was the last gothic cathedral built in the country. This “lady of cathedrals” consists of 18 chapels. 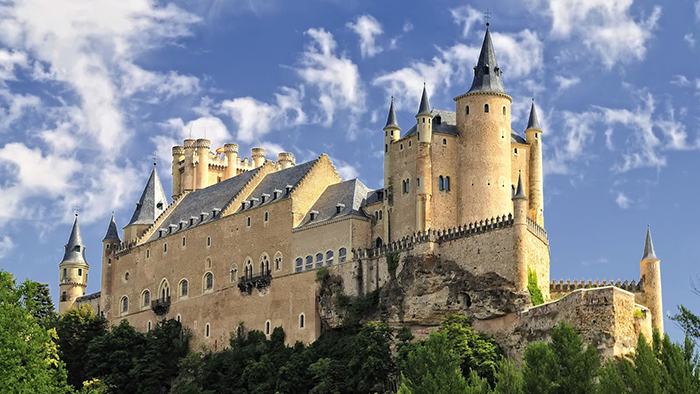 Segovia’s Meson de Candido (Plaza del Azoguejo, 5) is a family owned establishment located just steps away from the Roman Aqueduct. Since opening as an inn in 1786, this charming, rustic restaurant has been serving some of the best cochinillo in Spain. Meson de Candido’s ceremonial cutting of the pig is a longtime tradition that brings in thousands of diners each year.

This is done whenever someone orders cochinillo. A dinner plate is used to split open the pig and reveal the tender meat, then the plate is thrown to the floor. This ritualistic event takes place every day, many times a day. It is this flair for the dramatic that Meson de Candido is known for and definitely an experience to remember while visiting Segovia. 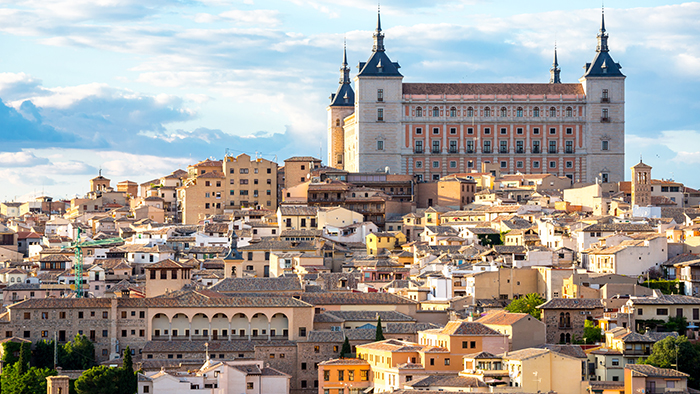 Located in central Spain, only 70 kilometers from Madrid, Toledo is a charming Spanish city dripping with history. Getting from Madrid to Toledo only requires a train from Atocha Station, which takes 30 minutes and costs about €9 for one-way ticket. Arriving by car is also pretty simple. You just head south on the A-2 highway towards Getafe for about one hour.

The main entrance to the city is at the Puerta de Bisagra. Once you’ve entered the city, we recommend taking a taxi to the first bridge, and from there you can make your way to the center of the city on foot. An interesting aspect of the city is how reminiscent the architecture of the city is to that of older Arab cities like Morocco. 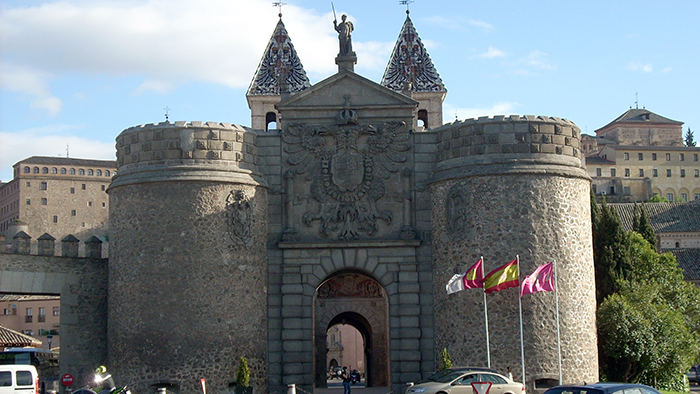 Once you’ve reached the center of the city, there are many winding streets that make it easy to lose your way. Try to get to the top of the Alcazar in order to get a good view of this scenic town. Another great spot to get a superior view of the town is the mirador, a lookout point above the city. You can take a bus here and then back to the center if you prefer not to walk uphill. Another great attraction you cannot miss is the statue of the famous Cervantes character, Don Quixote de la Mancha. It is located right outside of the main square, Zocodover. Once you have worked up an appetite walking the city, stop for a delicious lunch at Locum (see below).

Famous for its steel industry, Toledo is the ideal place to find traditional swords manufactured right in town. So, if you are shopping for a souvenir and don’t mind carrying a medieval-style weapon through airport security, pick up an authentic steel sword. A final word of advice you should keep in mind when planning your next trip to Toledo: avoid going in the summer months, especially July. The super hot temperatures make walking the streets an uncomfortable, and likely miserable, experience. 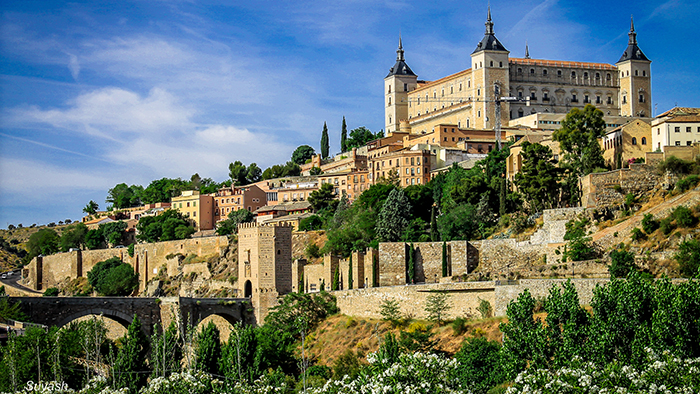 Locum (Calle Locum, 6) is situated inside an old Moorish building, in the heart of the old town of Toledo. Its distinct features can be noticed as soon as one enters the restaurant. First, Locum has a massive courtyard. A winding staircase takes diners to the different dining rooms. Locum’s sensual lighting, contemporary furnishings and splashes of color make for a calming ambiance.

In Latin, Locum means “the place,” and believe me this is definitely the place to go to enjoy succulent Spanish dishes. The traditional boneless cochinillo (suckling pig) practically falls off your fork! Don’t forget to order a glass of Rosé wine, the best pink wine in Castilla y La Mancha. It is the perfect way to accent the rich flavors of your meal.

Do you have any favorite top day trips from Madrid? Leave us a question or comment below!