Tucked away in the far south of Jordan is Aqaba, the country’s only seaport and a booming tourist town. Due to its strategic trading location, the area has been inhabited since 4000 BC and was referred to in the Bible as the port city of Ezion-Geber.

It continued its role as a port city through most of history, including during the Roman occupation and the Islamic era. During the beginning of the Islamic era, construction began on the city of Ayla, but the town never survived and its ruins are currently a tourist hotspot. Ayla is however mentioned in the famous Arabian Nights stories as one of the ports that Sinbad visited. 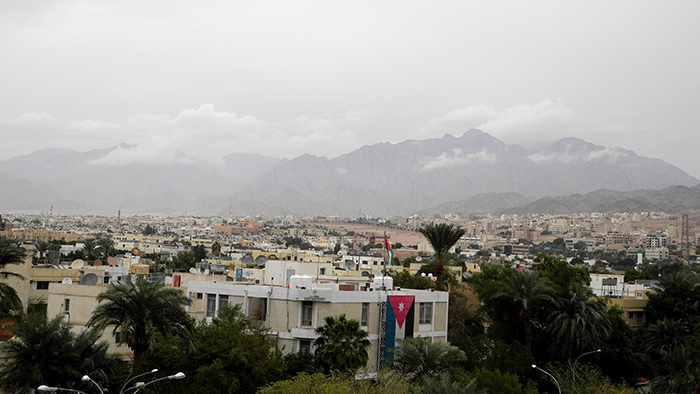 After passing through the hands of several Islamic dynasties, Aqaba eventually fell under the control of the Ottoman Empire in the 16th century. Until World War I, the city reverted from being an important seaport to a simple fishing village. During the Arab Revolt of World War I, forces led by Sharif Hussein and T.E. Lawrence ousted the Ottoman Empire from the region. Aqaba was then incorporated into Jordan and once again became a bustling harbor.

Check out 15 Things to See in Petra 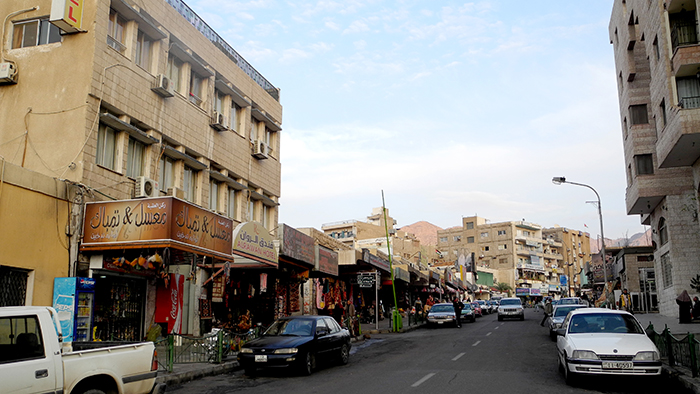 This sun-bleached city now receives almost all of Jordan’s imports and exports, phosphate and shells. It is also renowned for its stunning coral reefs and its plentiful water sports activities. Aqaba currently has six universities, one of which, the Red Sea Institute of Cinematic Arts, offers the only master’s of fine arts program in the entire Middle Eastern and North African region. 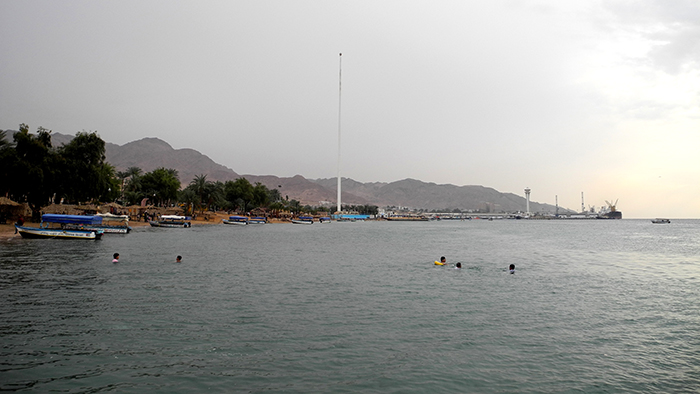 This city is also home to the Aqaba Flagpole, the third largest freestanding flagpole in the world. It was erected in honor of the Arab Revolt and currently bears the flag of the revolt. Standing 427 feet high, this flag can be seen from Saudi Arabia, Israel and Egypt. 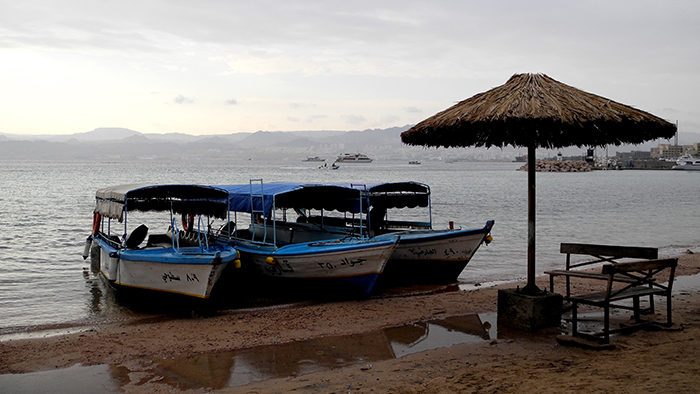 Tourists love Aqaba for its fun-in-the-sun culture and beautiful resorts. Aqaba offers several snorkeling and diving excursions to explore coral reefs and colorful sea life, or hop aboard a glass-bottom boat to peek into the deep sea. 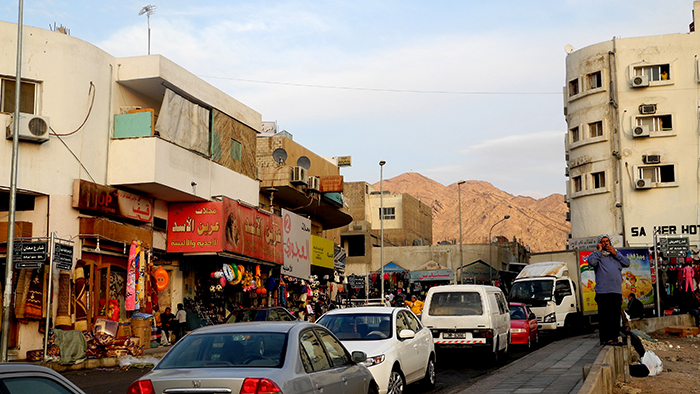 Here are our top 5 things to do in Aqaba, Jordan! 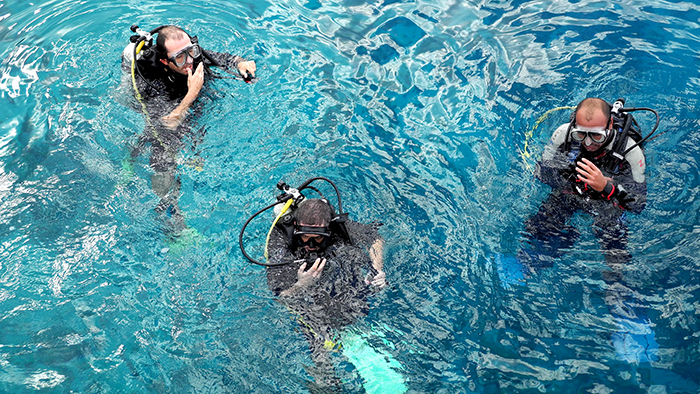 Snorkeling is the best way to explore Aqaba’s ocean floor and its wondrous coral reef. The Red Sea’s water temperature is perfect for swimming and diving, and is buzzing with life. You might think you are in a tropical fish tank while you take in the lush aquatic surroundings. The ocean floor is both colorful and lively, and will make for an ideal family outing. For those looking to go scuba diving, contact the Royal Yacht Club. A scuba or snorkeling group can be booked, which includes equipment rental and a barbeque lunch on board. 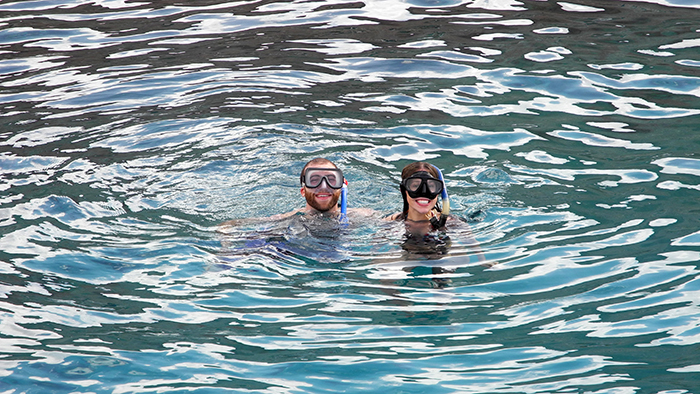 All of the diving is based from shore, so access to beautiful reefs is within easy reach. From fire coral to grouper, a multitude of diving spots feature prime sea life viewing and photographing opportunities. The area boasts 25 different diving spots; most are within the Aqaba Marine Park. 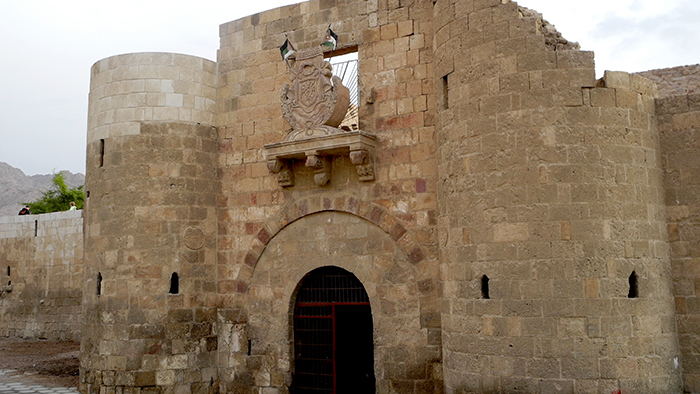 Mamluk Fort, also known as Aqaba Castle, is a partially rebuilt castle located on King Hussein Bin Talal Street. The castle includes a prison, an intimidating execution chamber, horse stables and a roost for messenger pigeons. Climb up to the second floor for a better view but be careful due to the lack of railings. 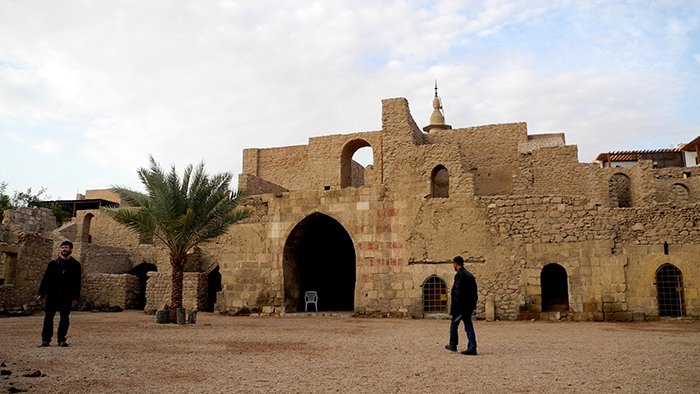 Also stop by the Archaeological Museum and the House of Sharif Hussein bin Ali to learn about the history of the castle. The ticket price for both areas is 1 JD. Visitors can also enjoy coffee or tea in one of the shops around the Giant Flag or ride around the flag on a camel or horse. 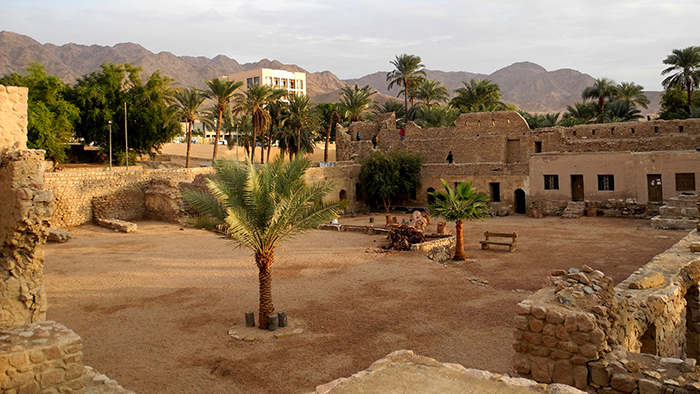 During its heyday, Ayla, built in 650 AD, was the first Islamic city outside of the Arabian Peninsula. These early Muslims designed special buildings called Misr. Each had a mosque, rooms for the local governors and quarters for the local tribes. Today the city lies in ruin but visitors can explore the area for free. 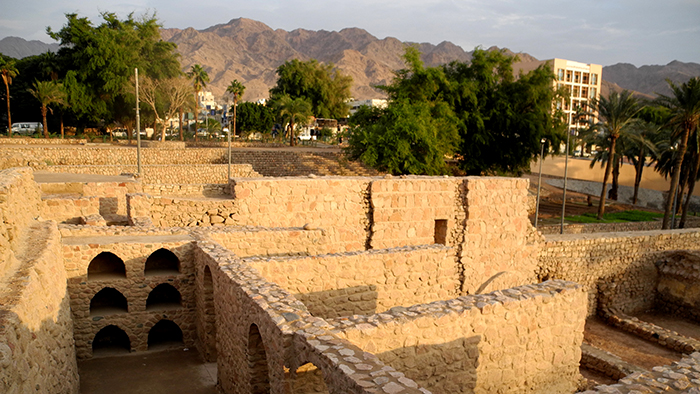 Informative signs can be found throughout the ancient city, providing visitors with more information about the city wall, the mosque, the towers and other buildings within the complex. Children will enjoy the valley located nearby, which was originally used to funnel floodwaters to the sea. Given the extreme heat, it is somewhat hard to believe that Aqaba ever experienced flooding. 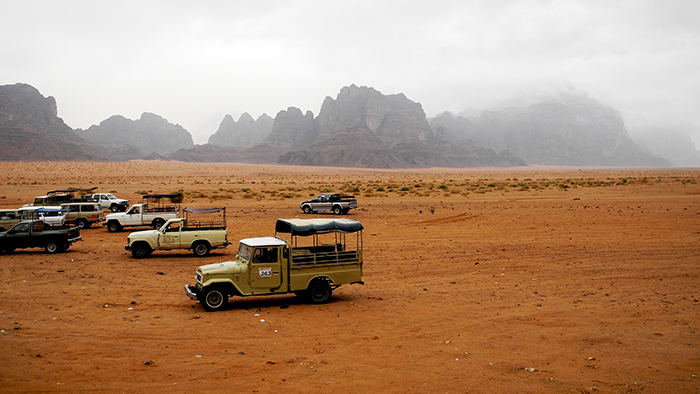 Wadi Rum, also known as the Valley of the Moon, is a stunning desert about an hour south of Aqaba that resembles the rocky surface of the moon. Ringed by black granite mountains, this area has been inhabited since prehistoric times. Visitors can find evidence of Wadi Rum’s early inhabitants by visiting the petroglyphs or rock engravings and pictograms scattered throughout the landscape, some which date back to more than 2,500 years ago and feature scenes of people hunting antelope. The main valley is now home to the Zalabia Bedouin, who run a booming eco-tourism business in this picturesque desert. 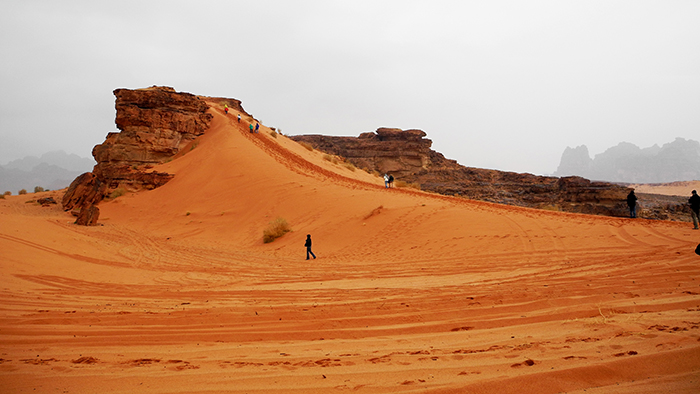 Movies buffs also may recognize the landscape from several films, including Lawrence of Arabia, Transformers: Revenge of the Fallen, where the desert masqueraded as Egypt, and Red Planet. 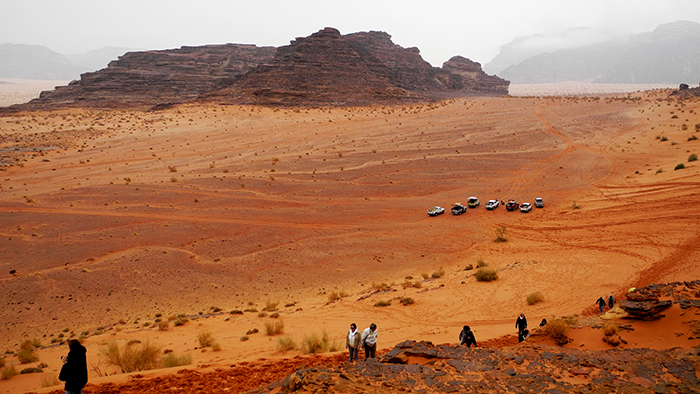 Upon reaching the entrance to the Wadi Rum Tourist Center, visitors will find themselves in a welcome pavilion accompanied by other tourists getting ready for a day of sightseeing. Once you step outside of the pavilion, be sure to look out for the famous Seven Pillars rock formation, which is a mountain with seven deep vertical ridges. You should hire a 4×4 vehicle with a driver/guide to take you deeper into the black mountains. The ride will take you past some incredibly large orange sand dunes that are strewn with oddly shaped rocks that will remind you of another world. Neither of these striking features can be found in the nearby Sahara Desert, making Wadi Rum a truly unique landscape that should not be missed. 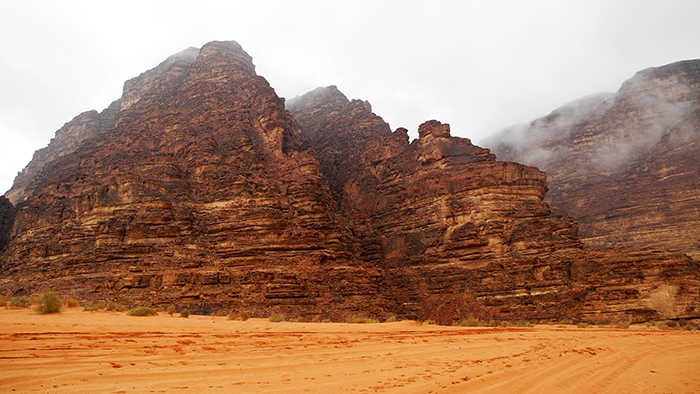 After some time on the Jeep and a few stops later, you will encounter a cluster of black Bedouin tents where you can purchase tea, souvenirs or take camel rides, which are a convenient method of desert travel and a fantastic way to take in the surroundings. Close by one of the larger Bedouin tents, a carving of the face of Lawrence of Arabia can be seen. Be sure to ask your driver to take you past the distinct carving. 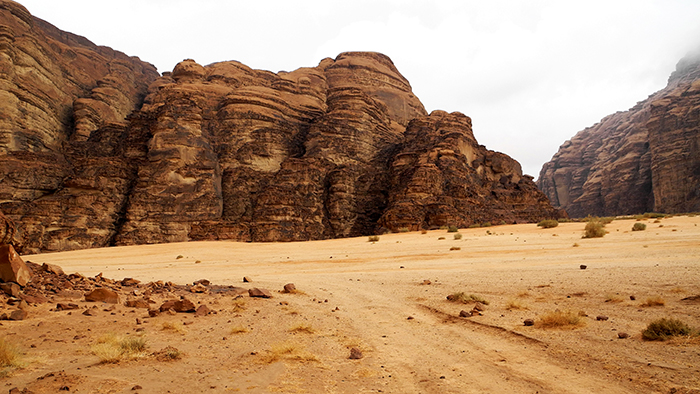 The friendly and knowledgeable Bedouins are masters of this landscape and they operate the tents, camel rides and souvenir sales. Their culture and heritage is so intricately tied to the desert, their presence will make your Wadi Rum experience authentic and unforgettable. Back at the welcome pavilion, you can grab a bite to eat at the restaurant, which serves traditional Jordanian cuisine such as lamb with rice, fried fish and kebabs. 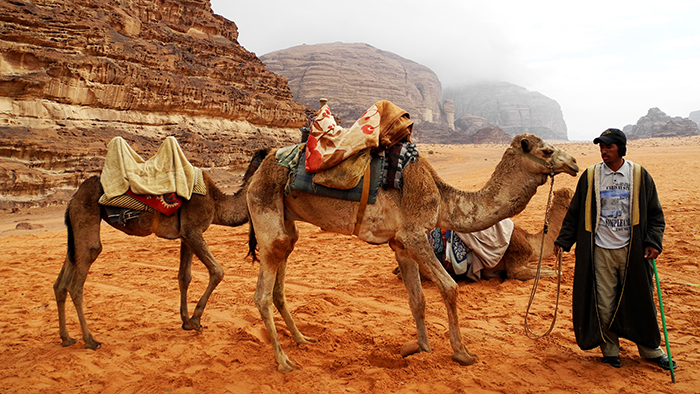 It is recommended that you pay for camel rides in Wadi Rum and/or in Petra. They can get pricey, but experiencing this magnificent desert on back of a camel led by a native Bedouin guide will leave you thankful you saved your dinar for the experience. If you are more of a risk taker, you can arrange for yourself or a group to sleep in a traditional Bedouin camp with meals included. The price is usually 25 to 30 JD per person for an overnight stay. 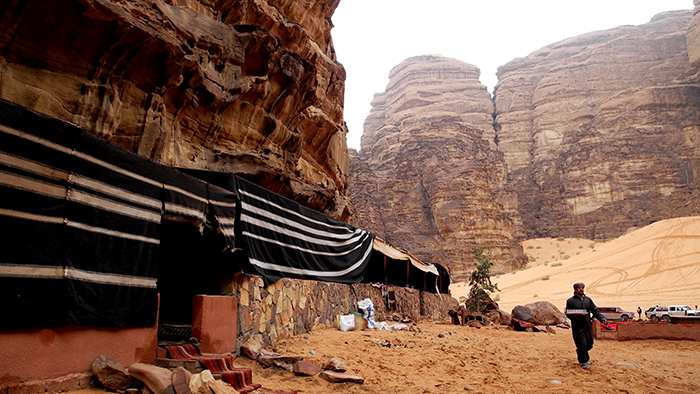 The most valuable advice to follow about any activity you wish to do in Wadi Rum is to reserve your guide or tour in advance! Research Wadi Rum Jeep tours and desert guides to make an informed decision. The right guide will bargain camel ride prices for you and enrich your overall experience. As with every tourist attraction, there are unfortunately instances when non-professionals scam naive tourists. 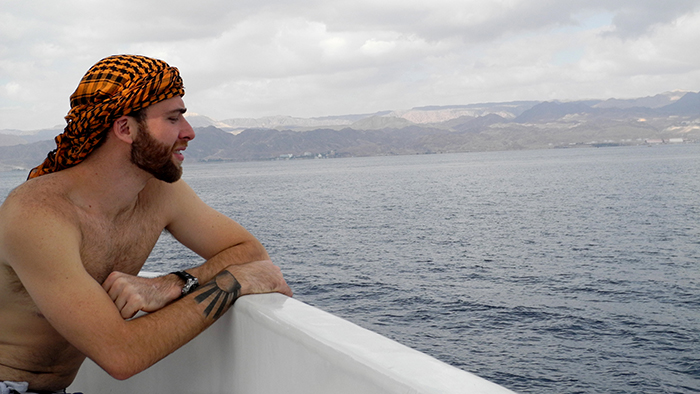 Aqaba is a small coastal town and Jordan’s only seaport. From here, it is possible to cross into Egypt, Saudi Arabia, and Israel, but unless you already have a passport for these countries, it is prohibited. During a visit to Aqaba in January you may find temperatures that are already scorching hot and it is highly advised that you not visit during July or August, the hottest months. 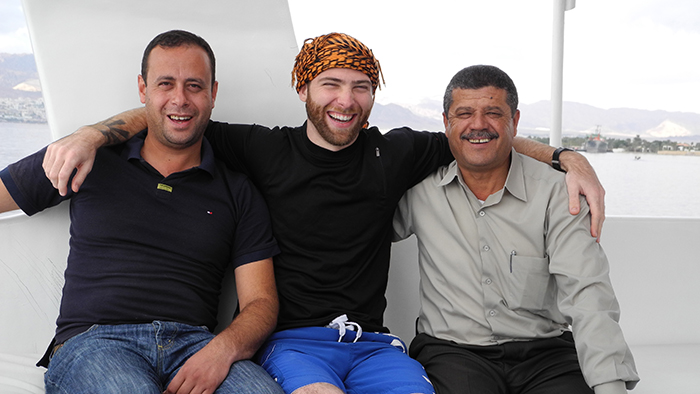 This small town is easy to explore and its downtown area is a great place to stop and enjoy some tea and shisha as well as to buy souvenirs. Beware of some of the vendors, who will lure you into their stores and then charge double or triple the normal price. Feel free to enter but do not feel obligated to purchase anything. 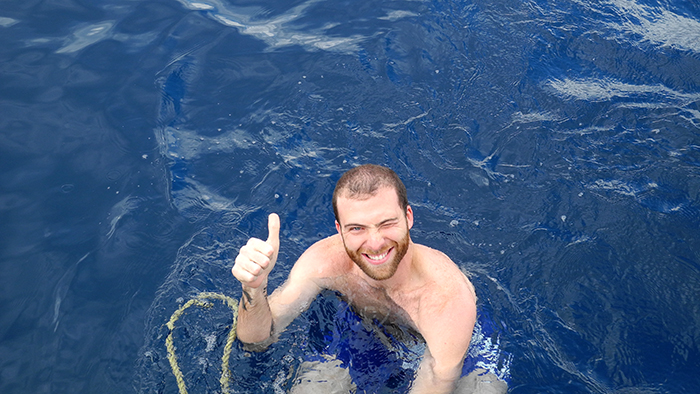 To avoid this hassle, simply stay by the beach and the resort. The beach is enjoyable but the ocean has so much more to offer. Book a snorkeling excursion or scuba trip, and enjoy the glory of Aqaba’s lively coral reefs. At least half a day is recommended to be able to soak in all the underwater wonders. 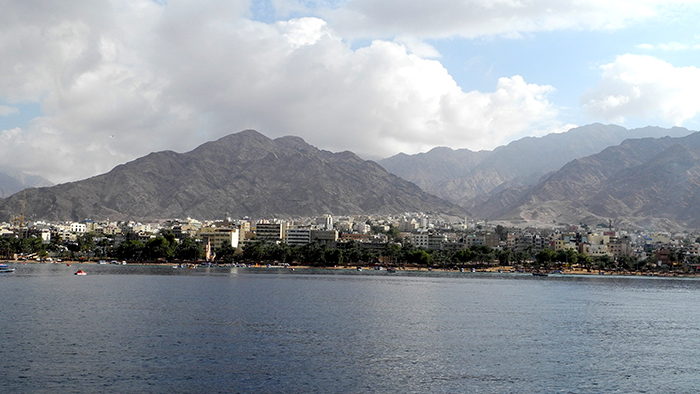 Visit the ruins of the city of Ayla and enjoy the historic feel of this ancient town. Don’t forget to visit the flag, placed next to the fort, which is one the largest flags in the world. But if you really want to see what Jordan is all about, stop by the Jordan Experience and learn how to explore this country the way it is meant to be.

Getting around: Walking is the easiest and best way to get around Aqaba. You’ll find that many of the places worth visiting are within walking distance. Taxis and buses are also available; if you take a bus, keep in mind that men and women do not sit next to each other.

Jordan’s streets are busy and clogged, so you may find it stressful to try to drive yourself around. It is best to stick to taxis or car hires. White taxis have fixed routes and are shared between passengers. Yellow taxis are private. Although the majority of taxis are fitted with meters, agree on a price before taking off, especially at night. Women should not sit in the front seat of a taxi. Tipping is not obligatory, but is always appreciated.

Visa: A two-week visa can be purchased upon arrival at the airport. A single-entry visa costs 20 JDs ($30). A visa can be extended at any police station.

Shopping: Aqaba is a duty free zone, so you’ll spend less on trinkets and souvenirs here than in the rest of the country. You’ll find sweets, books, gold, nuts, spices, handmade jewelry and plenty of “Made in Jordan” products. At the local bazaars, you’ll have a chance to talk to local merchants and soak up some local atmosphere. If you’d like to pamper yourself, many local shops and pharmacies sell facial and body products created from Dead Sea salts.

Tips for shopping: Negotiating prices is expected, but do not expect more than a 30 percent reduction of the original price. If you see a shop owner praying, wait until he is done before asking him any questions. As a general rule, the wealthier you look, the more you will pay for any given item; so you may want to leave the fancy watch in the hotel safe. Keep a close eye on your belongings. You do not want to attract pickpockets. But my best advice: enjoy yourself!

Hours of operation: Many businesses including banks and government offices are closed on Fridays and Saturdays. Other businesses also closed Thursday afternoons. Typical store hours are 9:30 a.m. to 1:30 p.m. and again from 3:30 to 6 p.m. Most museums are closed on Tuesdays. Early closing times are common throughout the month of Ramadan.

Best time to go: September through May

Have you ever visited Aqaba? What are your top 5 things to do in Aqaba, Jordan? Leave a comment below!