No trip to Malta is complete without a visit to Valletta, the nation’s capital city and cultural center. Thanks in part to its Baroque character, Valletta stands out as one of the most authentic capital cities of Europe. In Valletta, you will feel as though time stood still because of the remarkably preserved infrastructure. Valletta has been recognized as a UNESCO World Heritage Site since 1980. Book a 4-hour walking tour of Medieval Valletta here. 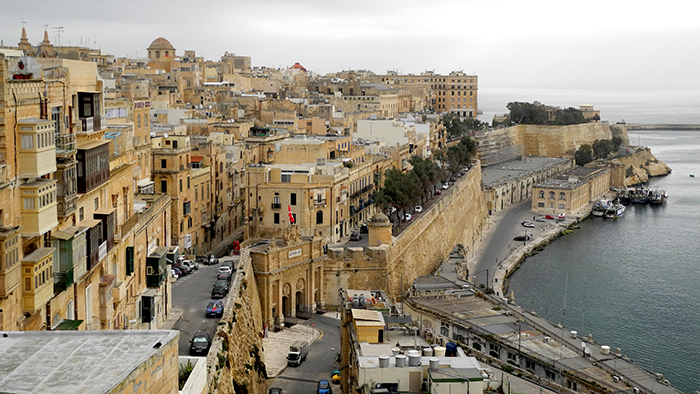 The Knights of St. John made invaluable contributions to the city’s construction and character during their 268-year long occupation of the island, which lasted from 1530 to 1798. Valletta was named after Jean Parisot de la Valette, a French-born nobleman and Knight of St. John who commissioned the construction of Valletta in 1566. The Knights’ symbol, the eight-pointed cross, came to be synonymous with the island and eventually became known as the Maltese cross. It is still presented proudly on the Maltese flag and on Maltese euro coins. The Knights, with the help of the native Maltese, forged a walled citadel that now serves as the city’s administrative district. 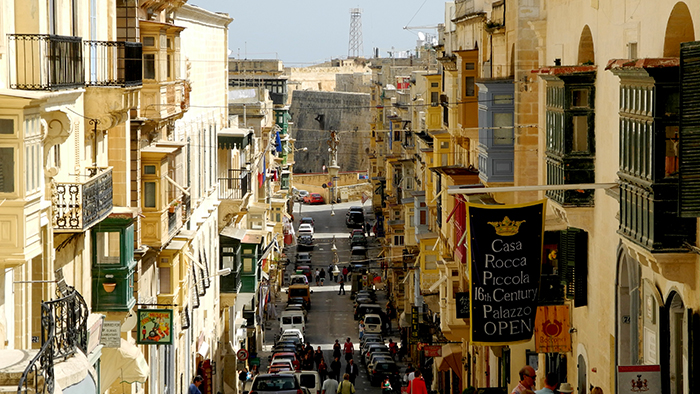 Valletta suffered extensive damage at the hands of fascist Italy during the Second World War. Many buildings like the Valletta Royal Opera House were completely annihilated. Bullet and bomb scars can still be spotted throughout the city. 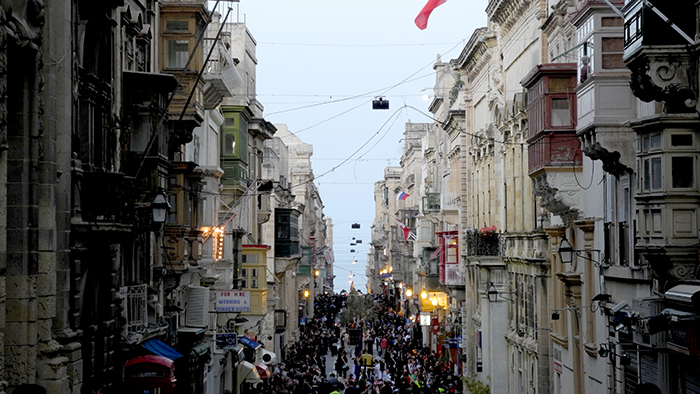 The city boasts palaces, museums, and forts. Most sites are located walking distance from each other. One of Valletta’s natural harbors, the Grand Harbor, is a popular European port of call for luxury cruise ships, private catamarans and lavish yachts. Valletta from the water is a sight to behold. A Grand Harbor cruise is an excellent way to see the city’s stunning skyline and gain a sense of its several distinct neighborhoods. Valletta’s Grand Harbor, like so many other places in Malta, has been used as a backdrop for Hollywood films such as The Count of Monte Cristo, Gladiator, U-571 and Munich. Here are 7 things to do in Valletta! 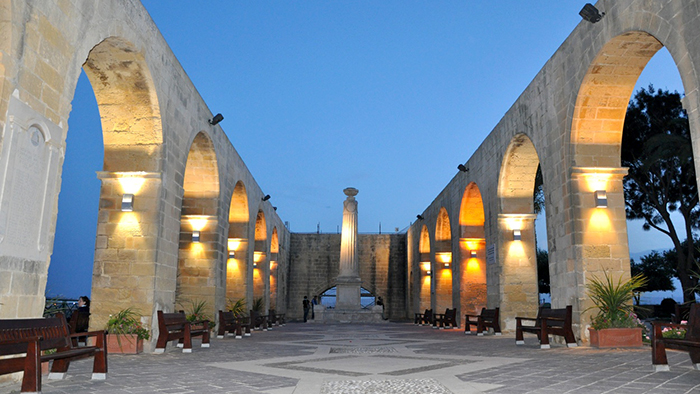 This public garden complex should be the first stop on your tour of Valletta. There are spectacular panoramic views of Valletta’s Grand Harbor and the nearby towns of Senglea, Vittoriosa and Cospicua (known as the Three Cities) from the large terrace. Sitting at the highest point on the city walls, the Upper Barrakka Gardens feature statues, sculptures and manicured plants. 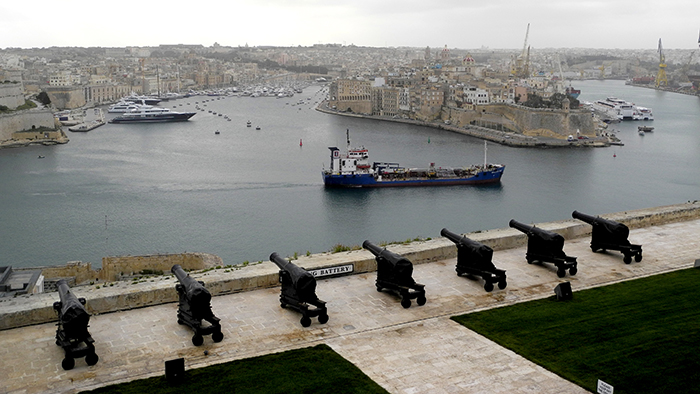 It is not uncommon for people who work nearby to bring their lunches here for impromptu workday picnics. It is easy to see why they do; the gardens serve as one of the best vantage points on the island. For the best pictures, come early in the morning before the rush of guided tour groups. At noon every day of the year, visitors can watch or listen for the single canon salute from a nearby battery. 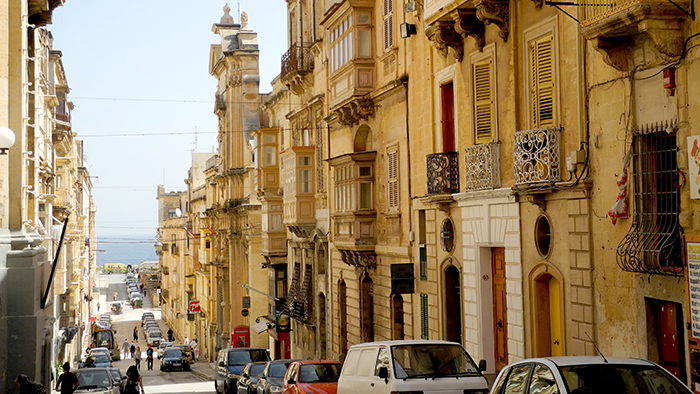 Walking around Valletta is an experience in itself and one that can be easily accomplished in less than a day. Many Christian churches can be found throughout the island (over 360 in total). It is believed that the Apostle Paul was shipwrecked on Malta in 60 AD, and it was he who incited Malta’s long history in Christian traditions and faith with his teachings. 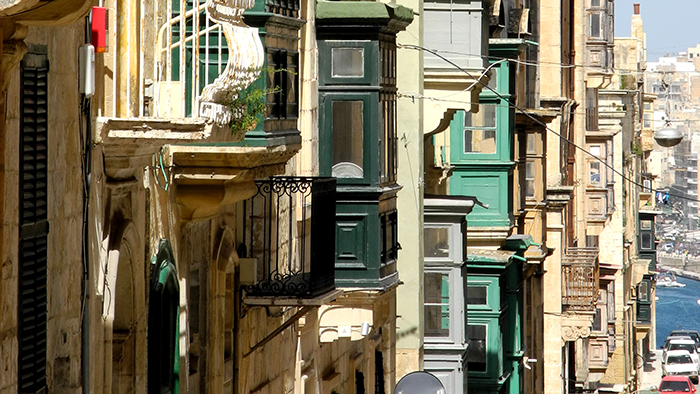 There are various churches on the island of Malta dedicated to St. Paul – St. Paul’s Shipwreck Church being the most iconic. It is located (you guessed it) on St. Paul’s Street. Inside, visitors can view a wrist-bone relic of the saint as well as a bit of the column on which he was beheaded. St. Paul’s Street is a charming avenue lined with colorful doors and brass doorknockers of antique houses. There are postcard-worthy views at every turn so make sure to keep the camera handy. St. Paul’s Street runs parallel to Republic Street (Triq ir-Repubblika). 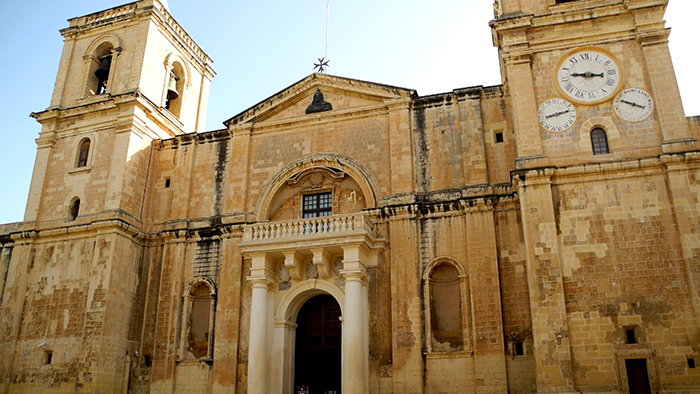 Sitting proudly in St. John Square is the St. John’s Co-Cathedral. This Baroque gem is arguably one of Malta’s most significant national treasures and one of the top things to do in Valletta. It was commissioned in 1572 by Grand Master Jean de la Cassiere, and was dedicated to St. John the Baptist. Construction ended in 1577 but interior renovations continued well into the 18th century. The exterior suffered significant damage during WWII air attacks, but thankfully it has survived to tell its tale. From the outside it is hard to imagine what you will discover inside. While the building’s façade is plain and uninspired, the inside of the Co-Cathedral is lavishly adorned with gifts from the wealthy knights who once used it as a house of worship. Gilded wall art, elegant inlaid marble floors and intricate murals covering every inch of the arched ceilings are the most notable design elements. 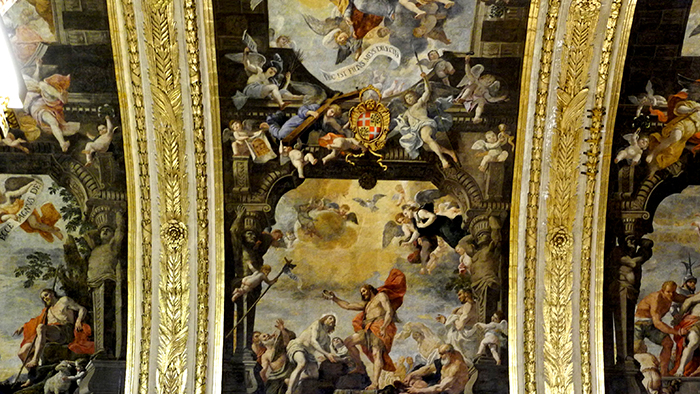 After browsing all six extravagant chapels (Germany, Aragon Castille and Portugal, Auvergne and Provence) head to the on-site museum, which holds two paintings by famed artist Caravaggio (The Beheading of Saint John the Baptist, 1608 and Saint Jerome Writing, 1606). Caravaggio is renowned for having painted religious figures with the faces of people he knew and also for his unique use of light and shadow. 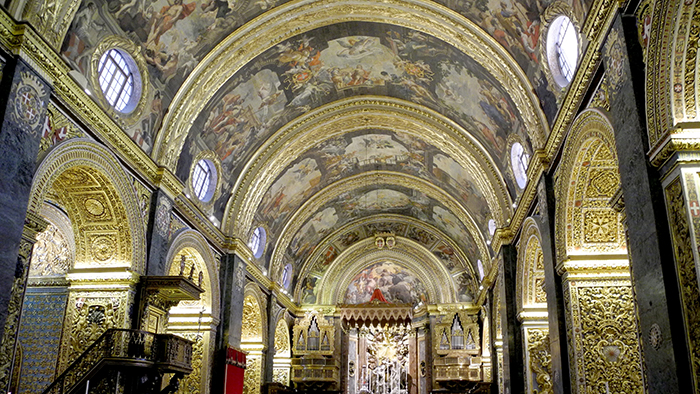 No flash photography or high heels are permitted inside the Co-Cathedral and visitors are mandated to dress appropriately. Slippers and shawls are available for sale at the ticket booth. The Co-Cathedral is open Monday to Friday from 9:30 am to 4:30 pm and Saturday from 9:30 am to 12:30 pm. Admission is €6 for adults, €3.50 for students and free for children under 12. 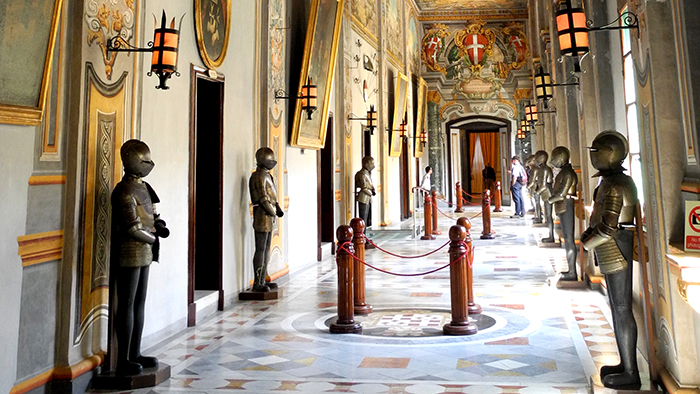 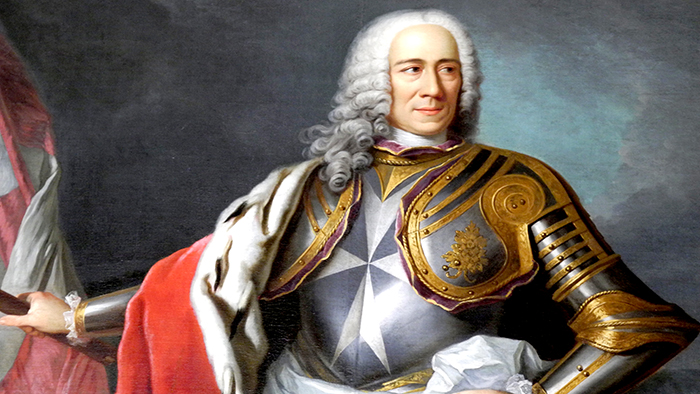 Currently, it is used by the President of Malta and Parliament, and although the entire complex is not open to the public, visitors are granted access to various halls and the palace’s pièce de résistance, the armory. Shiny suites of armor stand like sentinels along corridors adorned with portraits and Grand Masters’ coats of arms. 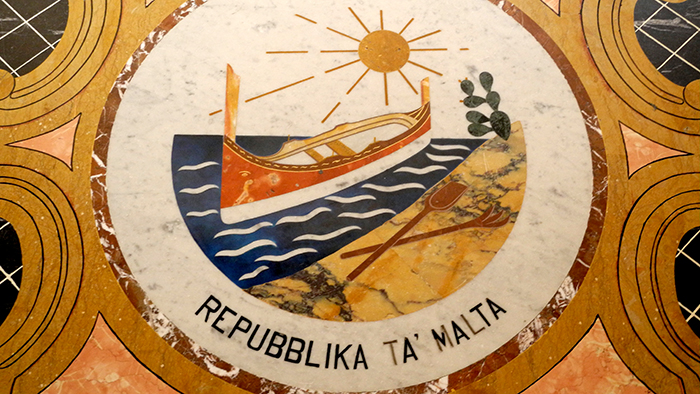 The Throne Room features large, dramatic frescoes by Matteo Perez d’Aleccio. Together, they portray the events of the Great Siege of 1565, during which the Knights stopped the Ottomans from invading the island. The tapestry chamber is another gem. The priceless collection of ceiling-to-floor Gobelins tapestries was gifted to the order by Grand Master Ramon Perellos y Rocaful in 1710. Each represents an exotic scene of flora and fauna from a conquered land. 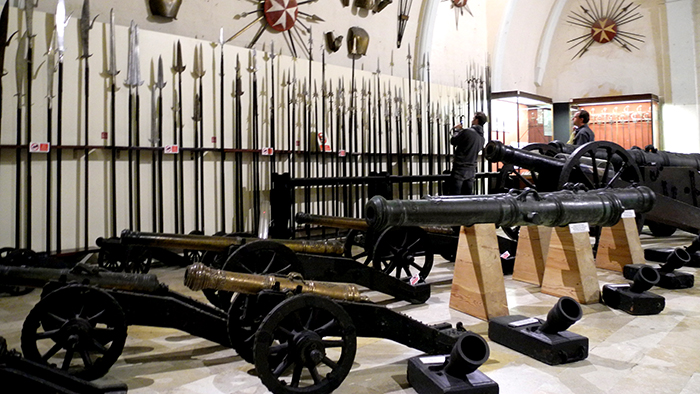 The armory is unquestionably the palace’s grand attraction. Its galleries showcase various types of arms from Malta, Italy, Germany, France and Spain. The extraordinary collection was started by the Knights of St. John, but then pilfered and diminished by Napoleonic troops in 1798. Cross bows, swords, guns, daggers, body and horse armor, spears and canons are just a few of the intact specimens on display. Be warned: You may not want to leave these rooms! 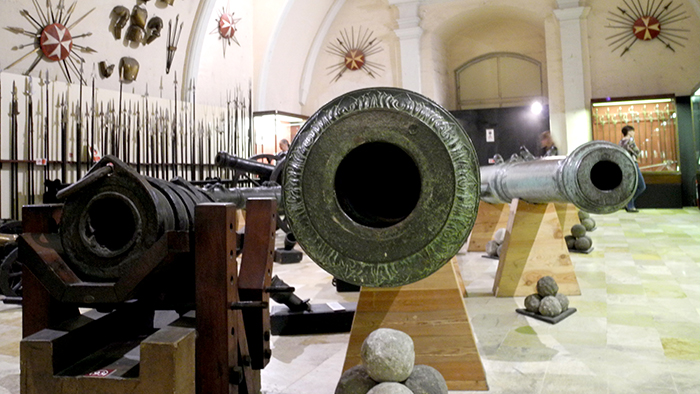 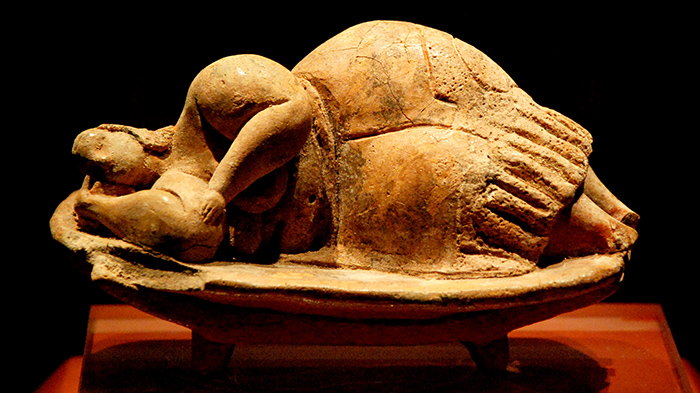 The museum features a historically significant collection of artifacts from the islands of Malta and Gozo. Exhibits showcase prehistorical findings that date back to 5200 BC up until 2500 BC. As of spring 2012, only the first floor galleries were open to the public, but expansion plans are underway to showcase Bronze Age, Roman and medieval exhibits as well. Visitors can browse displays detailing the arrival of the first settlers of the islands, the methods used to build the islands’ megalithic structures and view figurines of the “fat ladies” found at Hagar Qim. 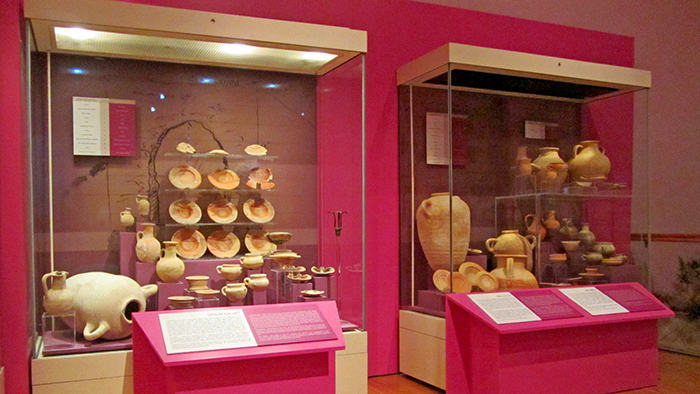 Of noteworthy importance is the Sleeping Lady statue. It was discovered during excavations of the Hypogeum and has become the most iconic symbol of prehistoric Malta. It depicts a woman with large, rotund arms, and legs resting on her side – most likely representing a fertility goddess. Replicas of the Sleeping Lady can be found throughout Malta’s tourist shops. She is somewhat of a local celebrity and a testament to the faith of the island’s first inhabitants. 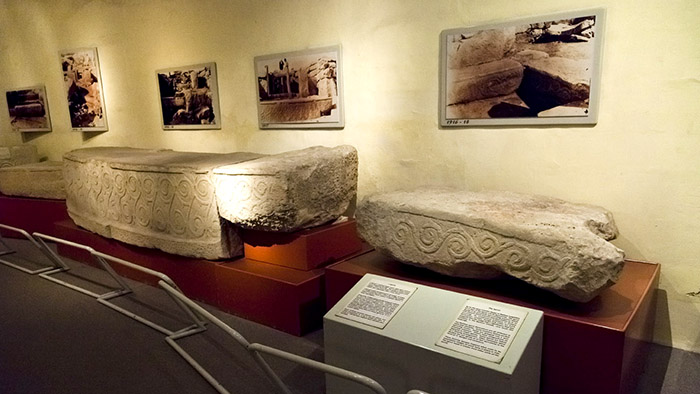 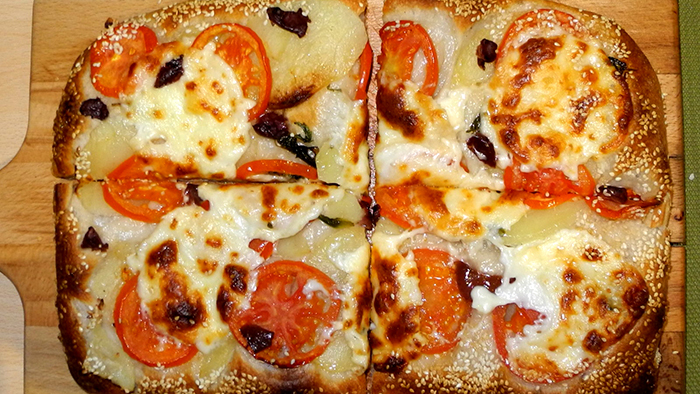 Maltese ftira-making traditions are carefully guarded recipes, but at the Nenu the Artisan Baker, you can have a go at making your own ftira. Ftira is the Maltese version of pizza – except it is tomato sauce-less. Mediterranean toppings of all sorts like olives, tomato slices, mozzarella cheese, sardines, eggplant, potatoes and capers are available to personalize your ftira. 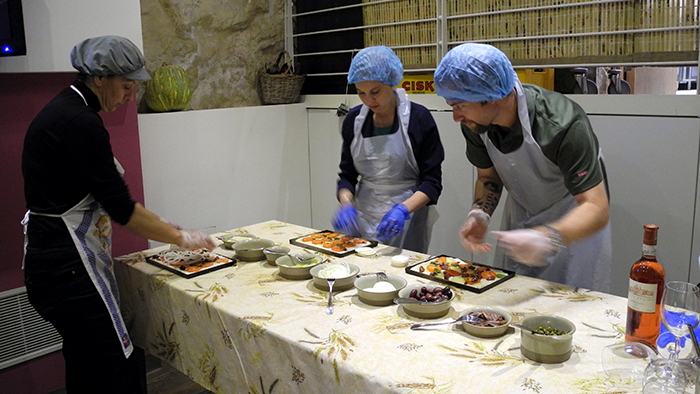 A ftira chef will help you knead the dough and pack it tightly into a baking pan. Then, the decoration is all up to you, just remember to top off the crust of your ftira with a sprinkle of sesame seeds for that extra flavor. Your Maltese creation will then bake in an antique wood-burning oven until golden brown. 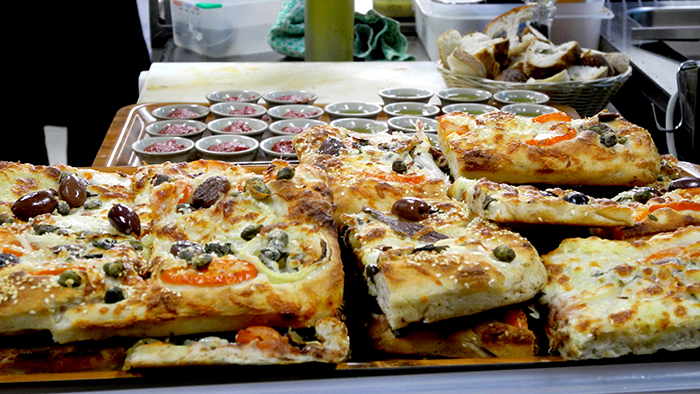 Maltese bread is regarded as one of the tastiest, highest-quality breads in the Mediterranean. The breads and ftiras baked at Nenu are made with traditional Maltese ingredients and techniques. They are amazingly fresh, crisp and unforgettably tasty. Be sure to bring your appetite. 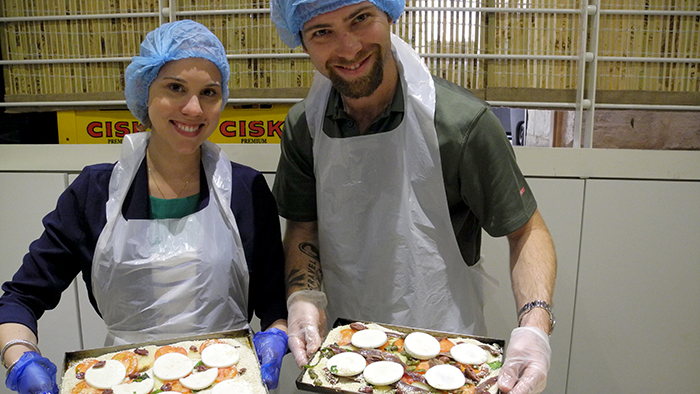 You can pick up, dine in or reserve ahead for your own private ftira-making class. Remember to pair your ftira with a cold Cisk beer or a Kinnie and enjoy. 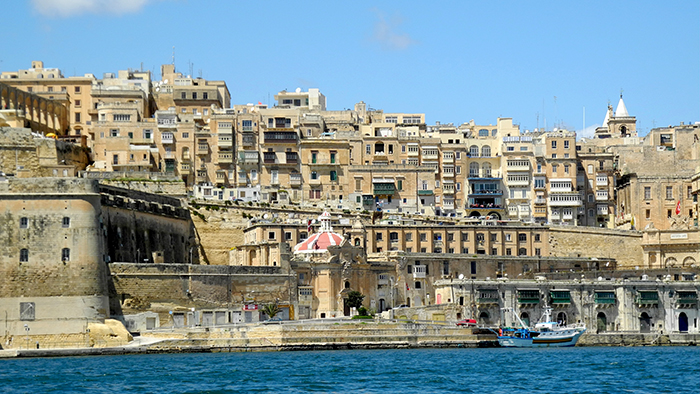 What better way to snap stunning pictures of Valletta than from the water? Head to the nearby town of Birgu (Vittoriosa) to book your 30-minute Grand Harbor cruise on an authentic and rare Maltese Dghajsa boat. These boats were originally built in the 1950’s for the British Royal Navy. Currently there are less than 30 of them in working order. Grand Harbor cruises typically cost €10 per person. 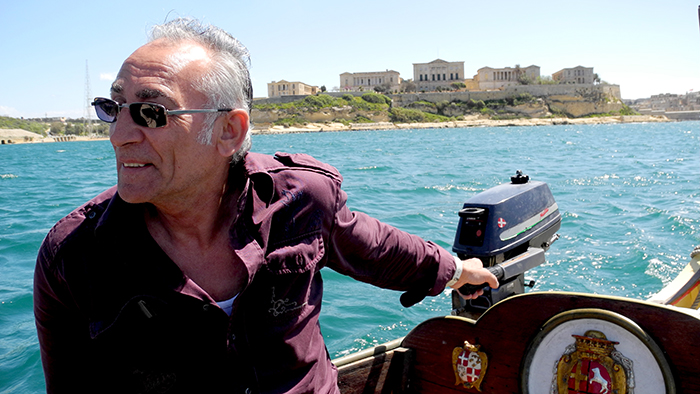 Your Grand Harbor tour will thrill you as you spot many of Valletta’s landmarks: Barakka Gardens, Siege Bell Memorial, Quarry Wharf, Fort St. Elmo and the Breakwater Bridge. You will feel as though you’ve traveled through time to an ancient, sun-bleached city that rose from the blue. The magical tour ends at the Valletta Waterfront, an area known for dining, shopping and leisure. 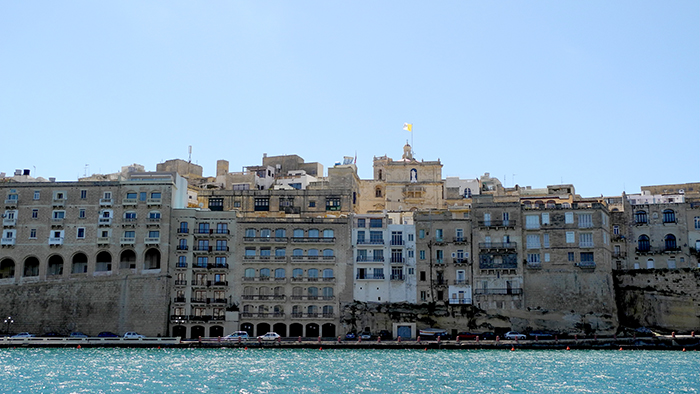 This Baroque wharf is over 250 years old. It was commissioned by Grand Master Pinto to serve as a marketplace for European merchants. Just as they were then, the warehouse windows are painted in a color that represents what was sold inside (i.e. red for meat market, blue for fish market). Although the warehouses are no longer in use, they remind us of Malta’s role in Mediterranean commerce. 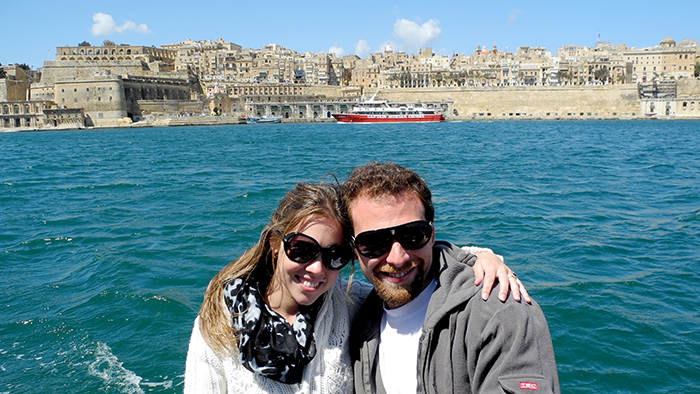 Have you visited Malta before? What are your tips for the top things to do in Valletta? Leave a comment below!