Last month I teamed up with the Curacao Tourist Board for a quick but fun getaway to the island of Curacao in the Caribbean Sea. Known for its Dutch colonial architecture and serene beaches, Curacao is wonderful mix of tropical landscapes and unique Euro-Caribbean culture. 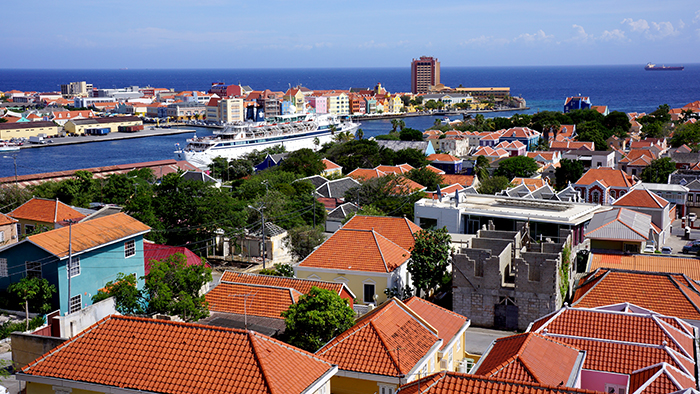 Curacao is an island in the southern Caribbean Sea around 40 miles north of Venezuela. It’s a constituent country that forms part of the Kingdom of the Netherlands. The island was discovered by the Alonso de Ojeda, a lieutenant to Christopher Columbus in 1499. The Spanish must have named it Corazon or “heart” because 20 years later the island appeared on a Portuguese map as Curacao. 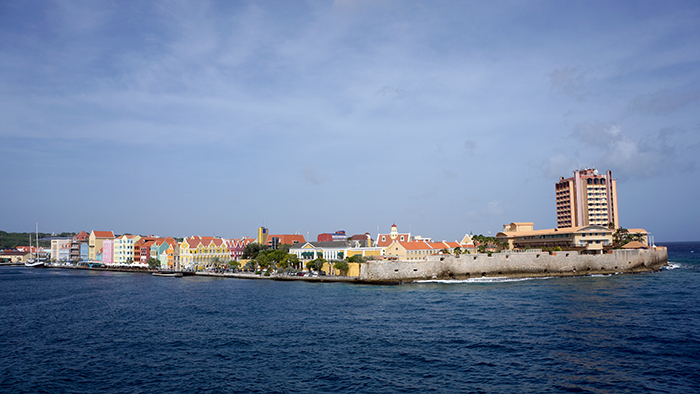 Curacao is an island of pristine, white beaches and azure blue waters enjoying a tropical climate year round. Dutch is the official language but, Spanish and English are also widely spoken. Papiamentu is Curacao’s local and native language and is a mixture of seven different languages (Spanish, Portuguese, Dutch, French, English, African and Arawak Indian). 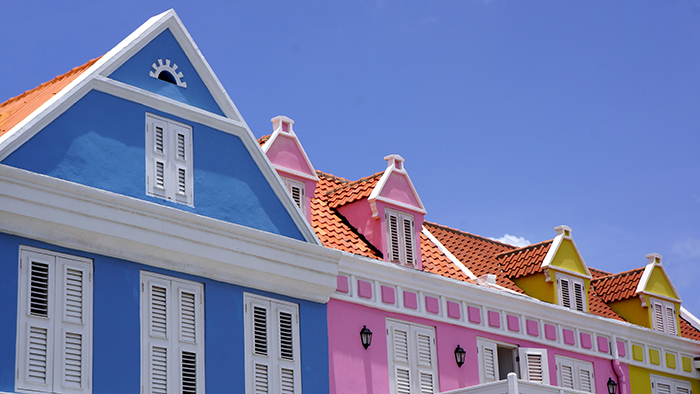 Willemstad is the capital of Curacao and it’s also a UNESCO World Heritage City. St. Anna Bay divides the city into two parts, Punda (east) and Otrobanda (west) and they are both linked by the Queen Emma Bridge. Most of the main sites can be found in Punda. Handelskade is the #1 attraction in Willemstad. This historical waterfront street features a row of colorful colonial Dutch houses. In 1817, after being plagued by recurring headaches, which he blamed on the glare of white houses, Governor-genergal Albert Kikket passed a law that pastel colors must be used on all buildings. This is why all the buildings here and in Willemstad are so vibrant. 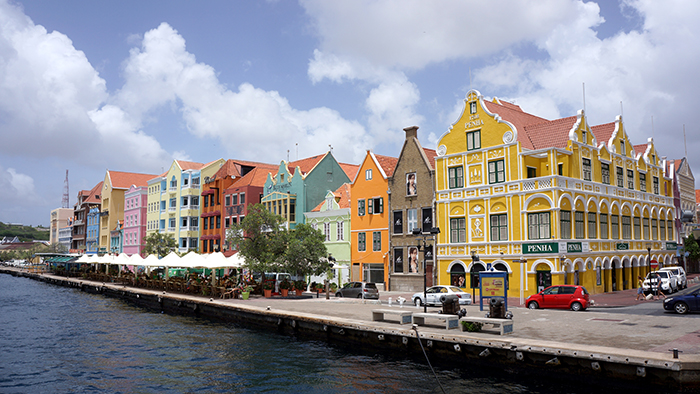 Queen Emma Bridge is a long pontoon bridge that connects Punda and Otrobanda. The bridge was built in 1888 and was completely renovated in 1939. It is hinged and opens regularly to let ships pass. The locals have given the bridge the nickname “Our Swinging Old Lady” as it will swing to the Otrabanda side of Willemstad. Try to be on the bridge (next to Punda) when it opens. This will give you the opportunity sway into the water and you can also capture some beautiful photos of Handelskade from there. 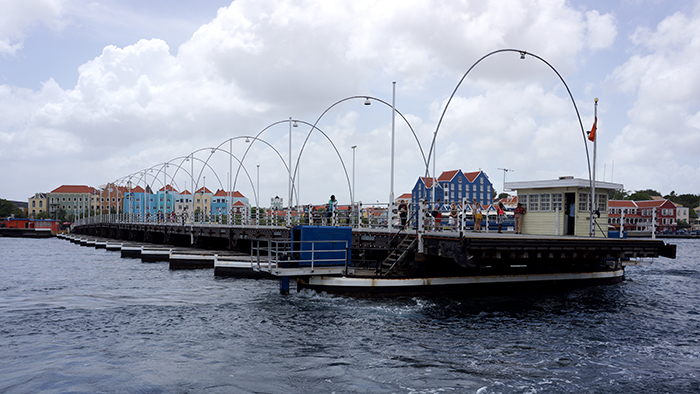 Next is the Floating Market – a network of boats from Venezuela loaded with fresh fruit and vegetables and sometimes even seafood. Here you can find bananas, avocados, yuca and even sugar cane at a super low price. If you’re looking to take pictures of the boats, pass the market and go to the next bridge. 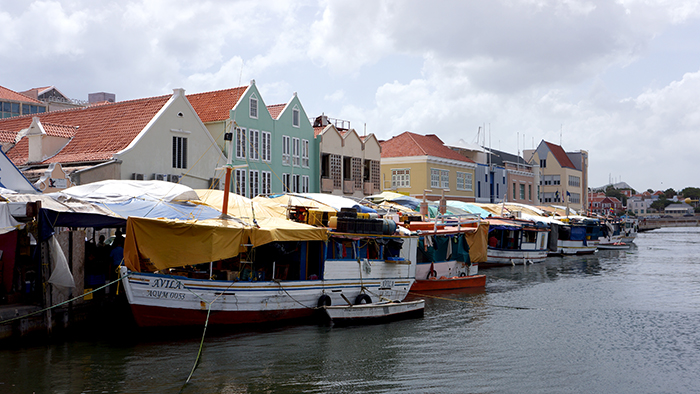 Now we head to Plasa Bieu, which is the old market. It used to be where women would sell food but is now a modern food court. I recommend you come for lunch to see all the action! If you’re adventurous then try some Iguana meat, a local delicacy! 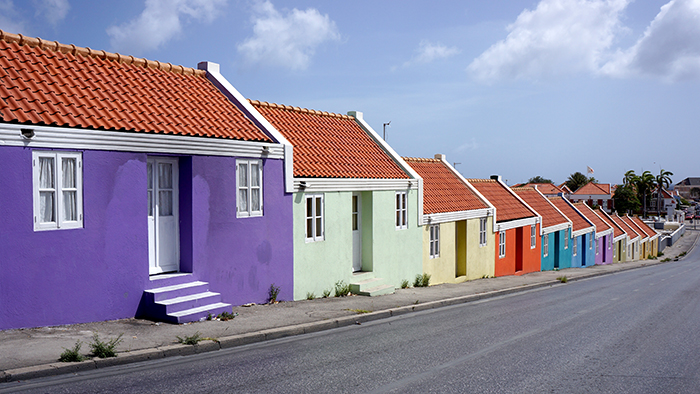 There are many forts in Willemstad. The three that you should visit are Fort Amsterdam, Rif Fort and Fort Nassau. Fort Amsterdam it is the most important fort on the island and is on the UNESCO World Heritage list. Today, the fort houses the Governor’s office, Council of Ministers and government offices. The Rif Fort dates back to 1828 and is in Otrobanda. Today it’s a shopping center with restaurants, bars, an ice cream parlor and a terrace on the harbor. Here you can get some of the best views of Fort Amsterdam and Otrobanda! 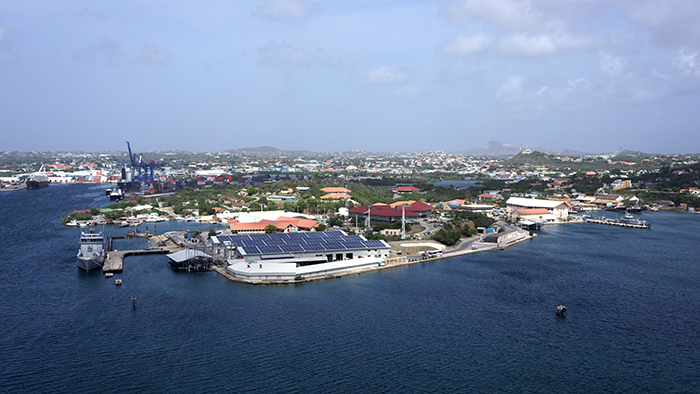 About a 5-minute drive outside of Willemstad is Fort Nassau. The fort was completed in 1797 to protect St. Anna Bay. For years it served as a signal post for the harbor and as a control tower operating the Pontoon Bridge. I recommend coming here if you’re looking for incredible views looking over all of Willemstad! 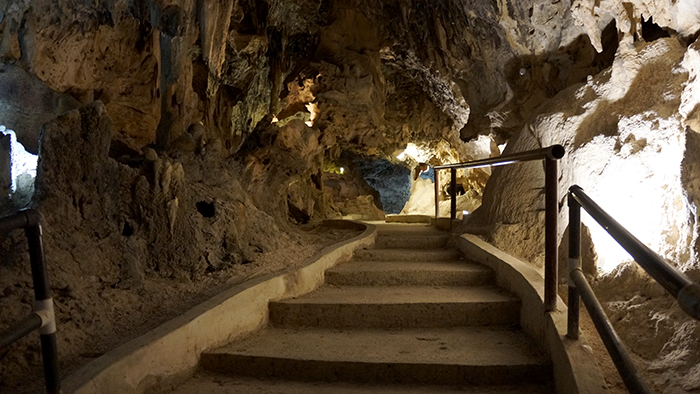 Near the airport we have the Hato Caves. These caves were formed millions of years ago under the sea. During the Ice Age, water levels dropped and the island of Curacao was born. There are multilingual tours given every hour on the hour between 9 am – 4 pm. Admission is 14 Nafl (€ 6,98) per person. 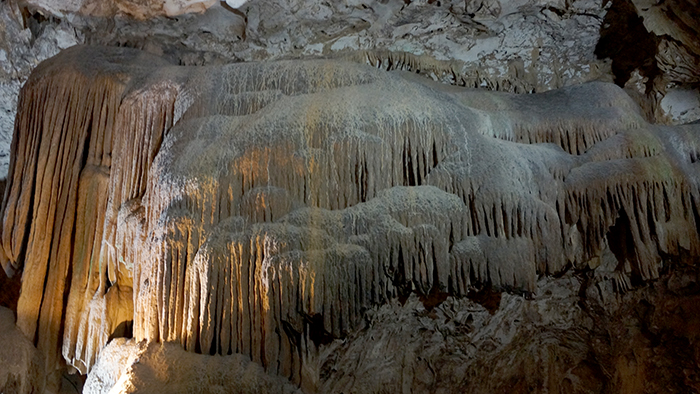 The cave is home to amazing limestone formations, pools, waterfalls and many famous statues. The most famous of the statues is the Madonna statue, but my favorite was the pirate with a patch and no eyes! There is also a colony of bats inside the cave so pictures are strictly prohibited. The tour last roughly 45 minutes. 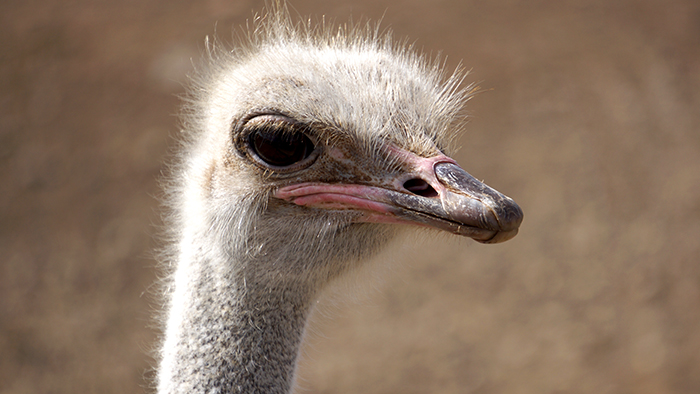 The Curacao Ostrich Farm is located about 15 minutes drive south of Willemstad on the road to Groot St. Jordan in Santa Catherina. The Ostrich Safari Tour ($17) takes you around the farm in a safari vehicle to learn about the African Ostrich and the Emu. Here you will encounter all stages in the life of the ostrich, from egg, baby, juvenile and adult. 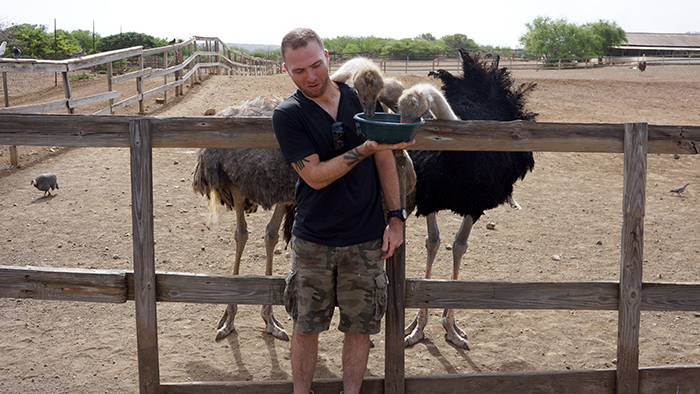 The farm also has a few Emu, the second largest bird on earth. They look very similar to an Ostrich, but their color is a bit darker. Afterwards, your guide may show you an Ostrich doing the defense dance. I then got a chance to see the baby ostriches and even get to stand on an Ostrich egg, which is extremely strong. Overall a great experience to learn about this amazing birds!

Try Curacao Liqueur at the Factory 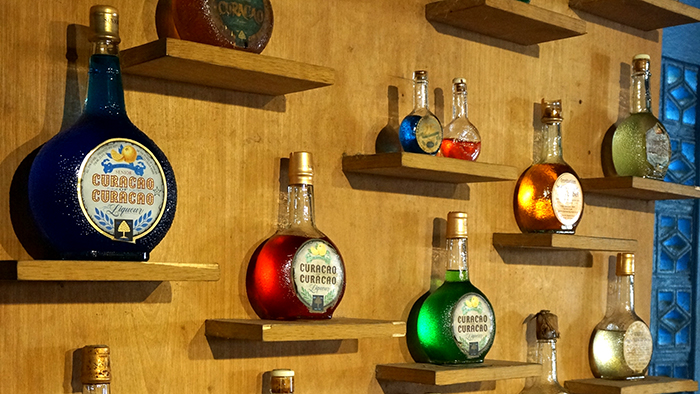 Only a few minutes outside of Willemstad is The Genuine Curacao Liqueur factory, which dates back to 1896. A visit to the distillery is a journey through the history of Curacao. Here you can walk through the history, learn about the production process and at the end you can try a few of the different flavors that they produce. 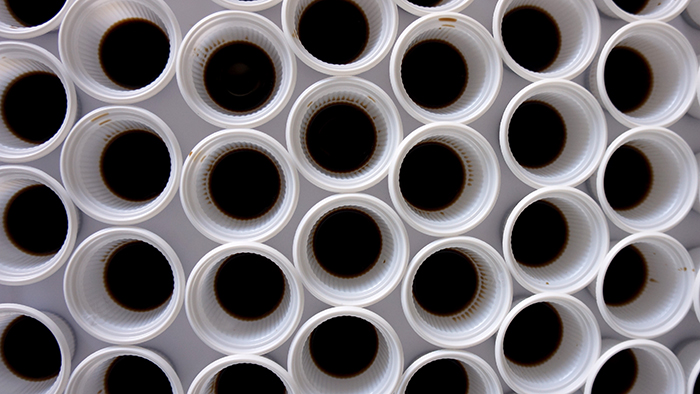 The Genuine Curacao Liqueur is the only truly authentic Curacao in the world! The product is sourced from the lahara oranges from a single plantation in Curacao. The most famous is the liqueur blue, but they also have clear, green, red, orange, rum & raisin, chocolate and koffie. My favorite was definitely the orange! 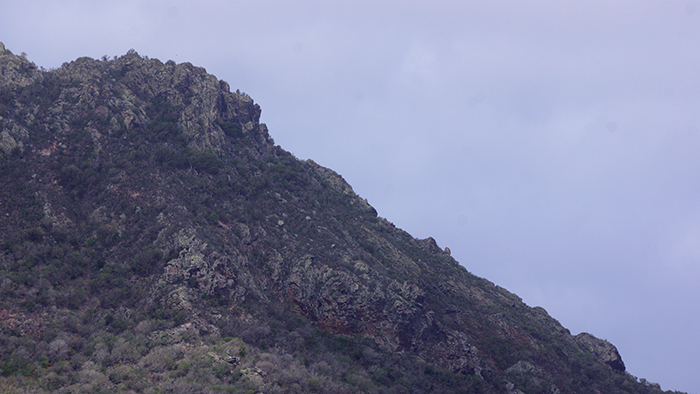 Christoffelpark is the largest national park of Curacao. The park has a rich variety of local flora and fauna, a national loves paradise! Some of the local birds and plants, are only found here and no where else on the island include wild orchids, the Palabrua, the rare native barn owl and the Curacao white tailed deer. 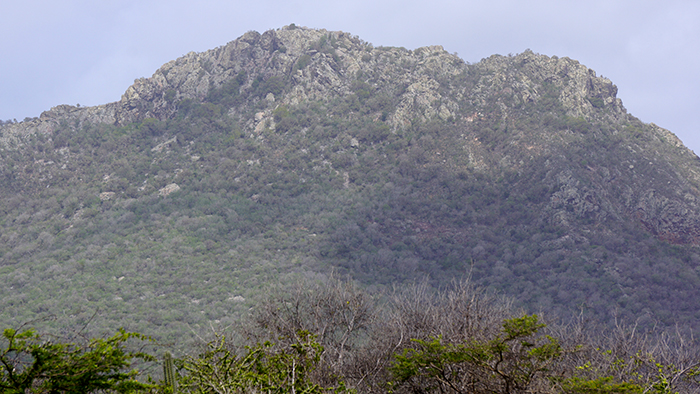 If you want to climb the Christoffel mountain (350 meters/ 1,150 feet) you should arrive very early in the morning. From the top you will enjoy the best views of Curacao. The park opens at 7:30 am on weekdays and 6 am on weekends. You should start your climb no later then 11 am because it can get extremely hot in the early afternoon. There are currently eight hiking trails, some are relatively easy and others are extremely challenging! Remember to bring lots of water and hiking shoes. If you don’t want to hike you can also take a jeep, mountain bike or even go horseback riding! 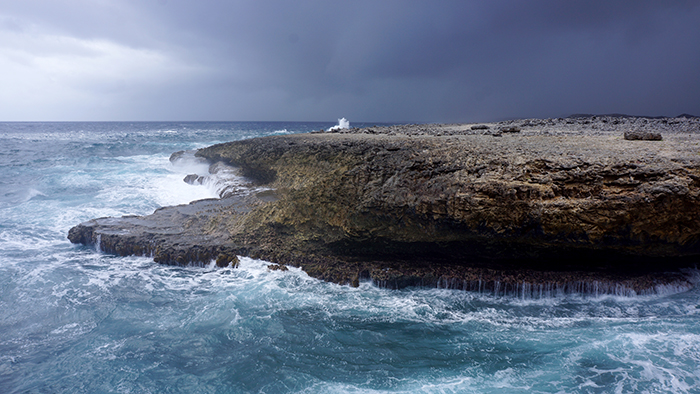 Shete Boka lies on the western shore of the island, alongside Christoffelpark. This national park is home to a dozen bokas (coves). Shete Boka means seven inlets, but there are actually many more than that. The park begins at Boke Tabla, where white waves crash into an underground cave. From the top of Boka Tabla, you get incredible views of the Caribbean Sea as well as waves breaking on the rugged northern shore. 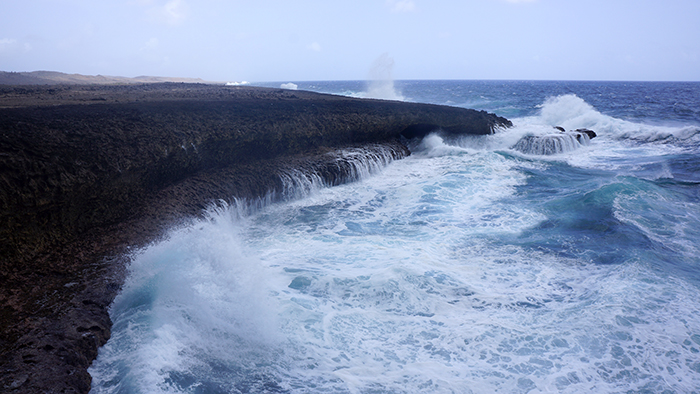 The one Boka you shouldn’t miss is Pistolero. The reason they call it the Pistol is because when the waves break on the boka it echos like a gun shot. It’s a bit of a hike down so make time to see this. Another fun fact is that three species of sea turtles nest here.

Stay at the Santa Barbara Beach and Golf Resort 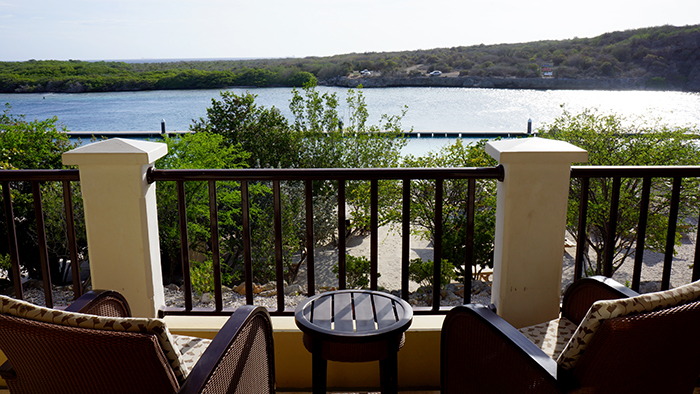 Santa Barbara Beach and Golf Resort is located at the southern tip of Curacao, sandwiched between the Caribbean Sea and Spanish Water Bay. This luxury resort boast 350-rooms, and is the perfect places for couples and families. On 2,000 landscaped acres, rimmed with a 1,500-foot long sandy beach. There are four restaurants and an 18-hole golf course designed by Pete Dye. 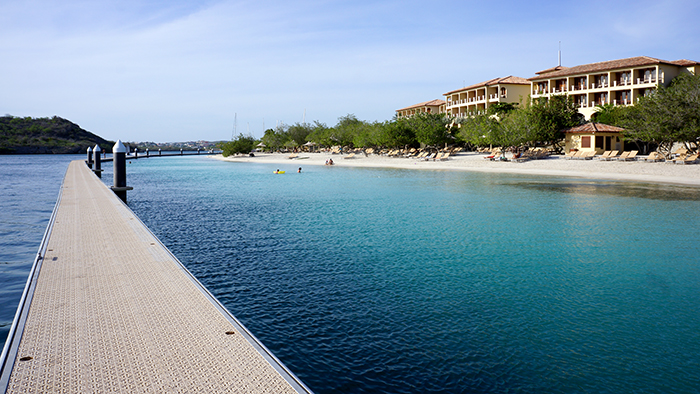 My favorite part about staying at the Santa Barbara Beach and Golf Resort was how calm it was. I really enjoyed waking up and being able to take a quick dip in the ocean before breakfast. The Atabei Spa, which is inspired by the rituals of the Arawak people (the original locals), is also an amazing place to unwind. 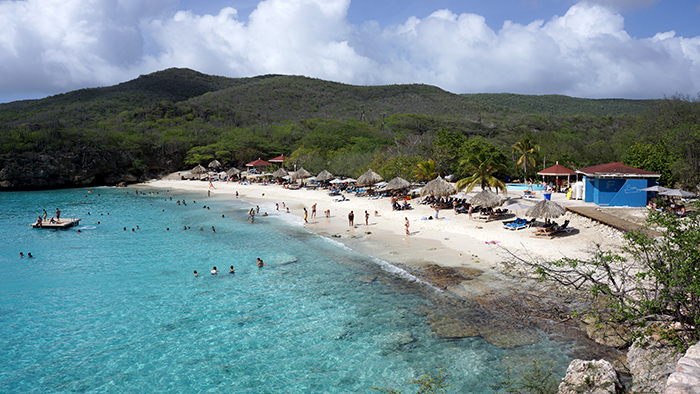 Playa Abou is one of the best beaches on the island, and it’s extremely popular with locals. It’s located between Westpunt and Lagun, and gives way to a small lagoon between high rocks. Its crystal clear blue waters are the perfect starting point for snorkeling, due to the huge coral reef nearby. 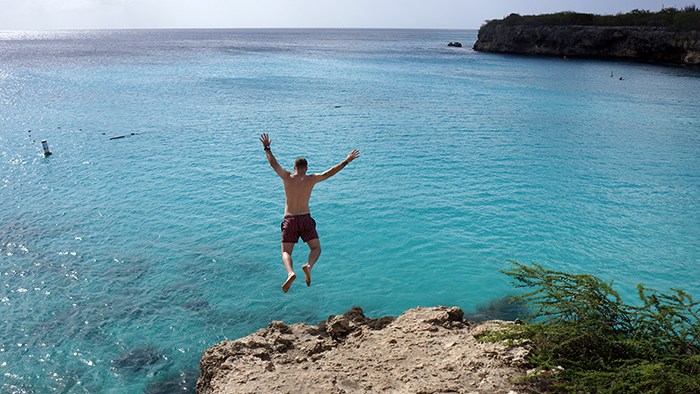 There are many places to cliff jump in Curacao, but Playa Abou is one of the safer cliff jumping spots. The cliffs aren’t so high, around 20 feet. There are lots of kids and adults jumping at the same time so anyone can do it. The one thing I recommend is to watch where everyone is jumping because there are big rocks on the bottom. Also don’t try to climb the cliff to get back up, rather swim back to the beach and take the stairs. There are many sea urchins and the waves crash every few seconds so I do not recommend climbing back up.

Go to the Suplado Blow Hole! 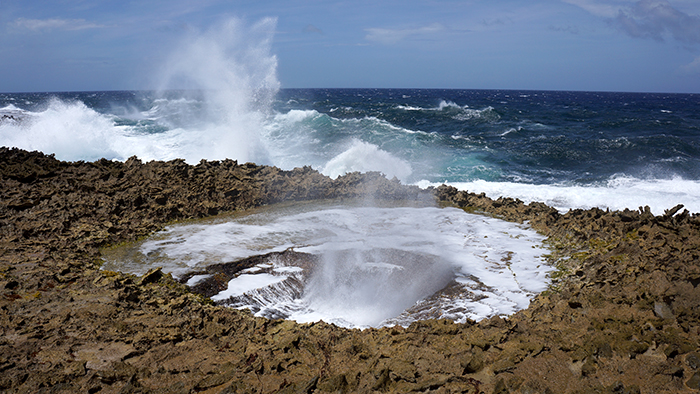 This blow hole is a secret! Located near Westpunt, there is only one way to get here and it’s by off-roading! I recommend you book a tour with Cervon Caribbean Gator Rental. It’s a very unique experience to go off-roading to areas of Curacao that are not accessible by paved roads. 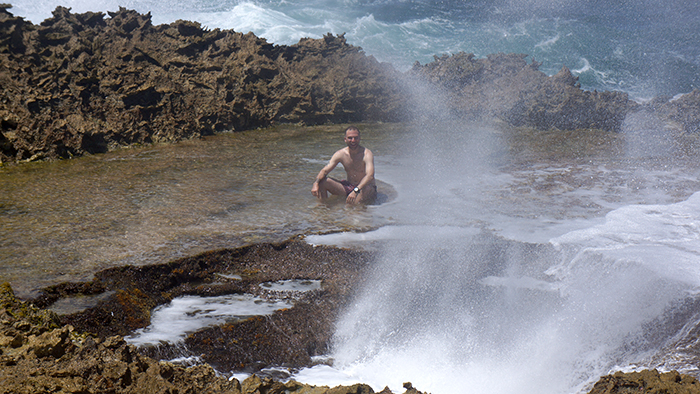 It is close to Boka Patrick, where the sea-water is sprayed through a chute into the air magically displaying beautiful fountains and rainbows. Surrounding the Suplado hole is a shallow pool filled with warm seawater. You can go sit down in the natural Jacuzzi but please use caution – wear water shoes, as the rocks are jagged and also don’t get to close to the hole as it can pull you in. It’s an amazing experience to have the water spray you in the face!

There are so many restaurants in Curacao. The diversity of the island is also reflected in the local cuisine. From fusion cuisine comes from the influence of Spanish, Dutch, Venezuelan, Indonesian and even Portuguese Jews. Here are four restaurant I recommend you try: 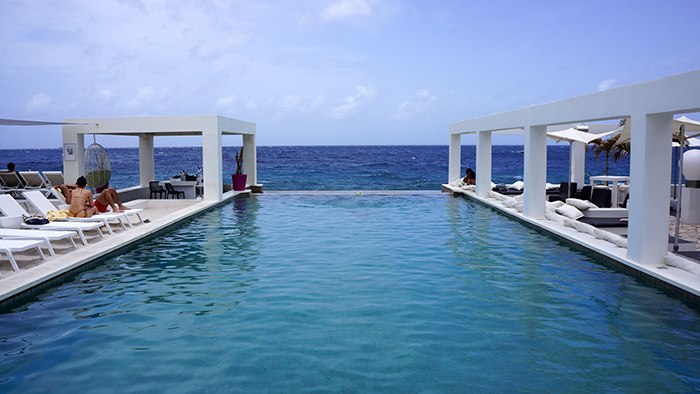 Saint Tropez Ocean Club is located in Willemstad, and is one of the more chic restaurant settings on the island. This is a French-style beach club with modern, all-white design makes you feel like you are in Saint Tropez, France! Take a table and try some of the international food and sip on some Chardonnay. Afterwards, head to the pool and lounge on a canopy bed overlooking the Caribbean-sea. 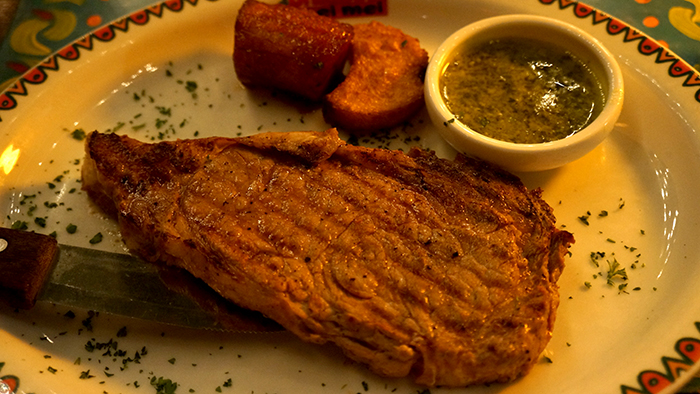 Brakkeput Mei Mei is a steak house on the front terrace of a historical plantation house. They have a great selection of fish and meat specialties from the grill accompanied by delicious salads from their salad bar. On the weekend they have live music and Thursday night is lobster night. I had a delicious ribeye steak.

Other great restaurants include The Boathouse and Karakter.

Curacao has daily non-stop air services from the U.S., and daily flights to Venezuela and from the Netherlands. I flew American Airlines round-trip from Miami. Curaçao also offers flights to Germany, Canada, Brazil, Surinam, Colombia, Puerto Rico, Jamaica, Trinidad & Tobago and St. Domingo, Bonaire, Aruba, and St. Maarten. Connections can be made to any part of the world.

Check out some more tours you can book in Curacao here! 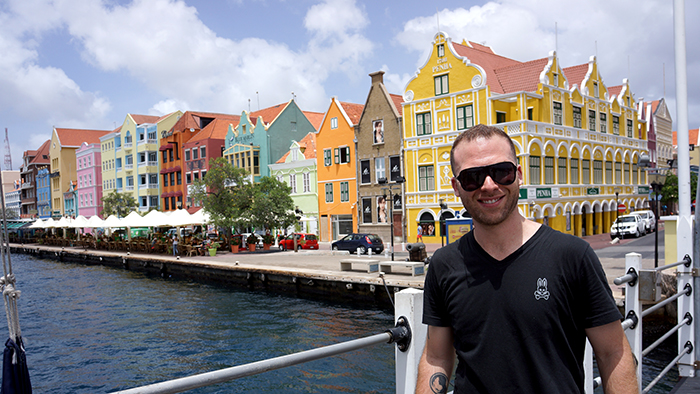 Have you been to Curacao? Leave us a comment below with recommendations about places you must see in Curacao!

One thought on “10 Things to Do in Curacao”