Larnaka is the third largest city in Cyprus, situated on the country’s eastern coast. If you’re flying to Cyprus you most likely will arrive at Larnaka International Airport, the country’s main airport. There are many things to do and see in Larnaka but to really see Cyprus you have to rent a car and explore some of the nearby wineries, beaches and towns. Here are 8 epic day trips from Larnaka!

Check out our guide to the city: Top Things to See and Do in Larnaka, Cyprus 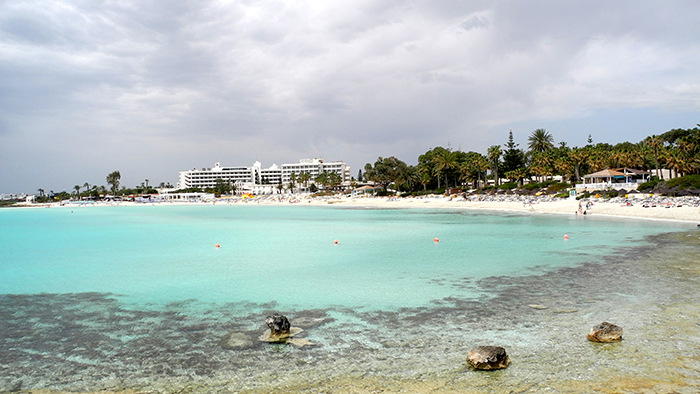 From May until September, Ayia Napa is Cyprus’ party hotspot. This spirited resort town is known for its vivacious nightlife and picturesque beaches. With abundant bars, clubs and restaurants, Ayia Napa is a clubber’s dream come true. Visitors travel from as far as Russia to splay out on the beach chairs of Ayia Napa’s top tourist attraction, striking Nissi Beach. 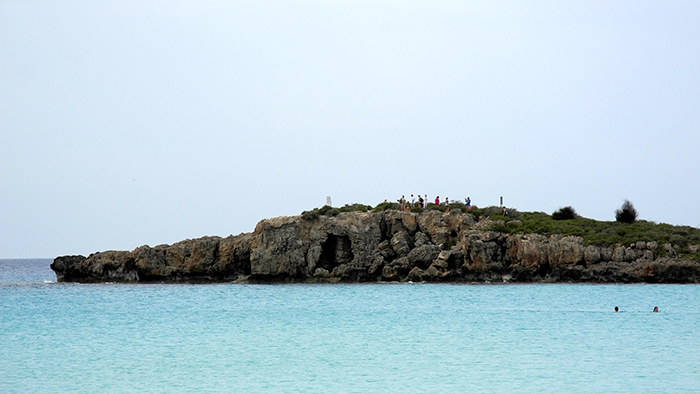 This 500-meter-long stretch of beach comes complete with its own mini-island, or nissi in Greek. At low tide, people easily cross the sand bridge to the islet. Nissi Beach boasts plenty of water activities and places to get loose. The Nissi Bay Beach Bar is infamous for its scandalous foam parties and DJ jam sessions. 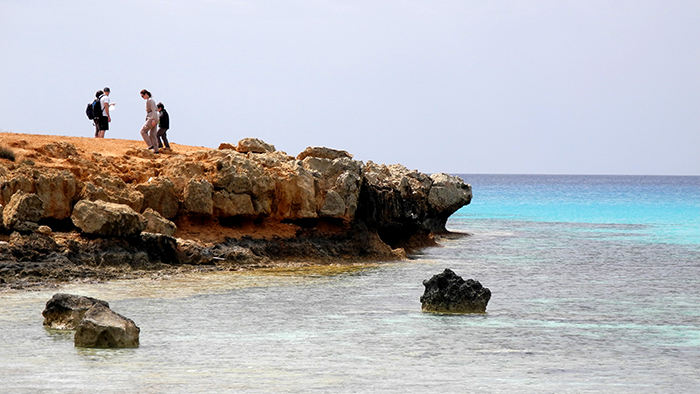 East of Nissi Beach is Vathia Gonia, or Sandy Bay. Here visitors will find the same delicate sand as Ayia Napa, sans the large hormonally charged crowds. Sandy Bay is ideal for families and for those looking to relax by the water with a good book.

If you do not want to venture far from the center of town to get some sun, look no further than Grecian Bay Beach, also known by the names Glyko Nero and Harbor Beach. Here you’ll have all the modern conveniences of the town just steps from the water.

Check out our Top Things to See and Do in Larnaka, Cyprus 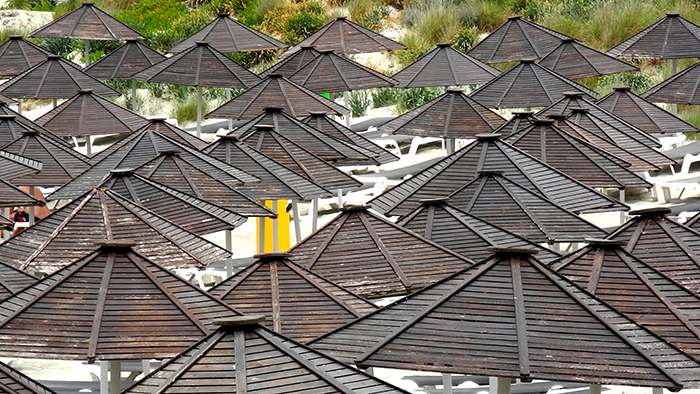 Ayia Napa is a great place to visit for the day. The area is packed with restaurants and water sports of all kinds, including diving. The best part is that it’s only a half-hour drive from Larnaka.

Choirokoitia is a Neolithic settlement located in the town of the same name. It is one of the most important archeological sites in Cyprus and the Eastern Mediterranean because of its significance in revealing how Neolithic society lived in the 7th millennium B.C. The Neolithic people of Cyprus hunted, farmed, lived and died in tight communities. It is unknown why traces of their society suggest that they suddenly vanished sometime in the 4th millennium B.C. 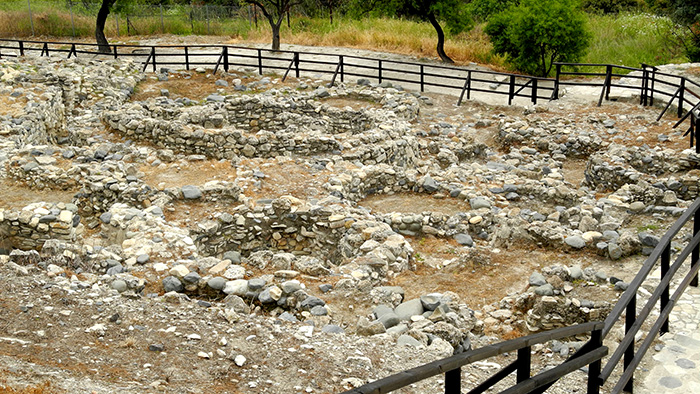 Since 1998, Choirokoitia has been a UNESCO World Heritage Site. The Neolithic structures that have been uncovered are in remarkable condition, but in order to give visitors an even clearer picture of what they once looked like, five model dwellings have been constructed. They were built much in the same way as the originals, without the use of modern tools. 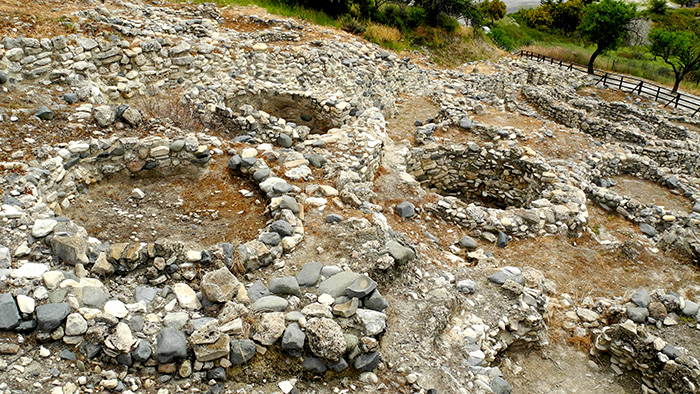 Limestone rocks, pebbles, logs, straw, and mud were the building materials archeologists used to recreate the circular dwellings. If you plan to visit Choirokoitia Archaeological Site, bring comfortable walking shoes and a bottle of water. 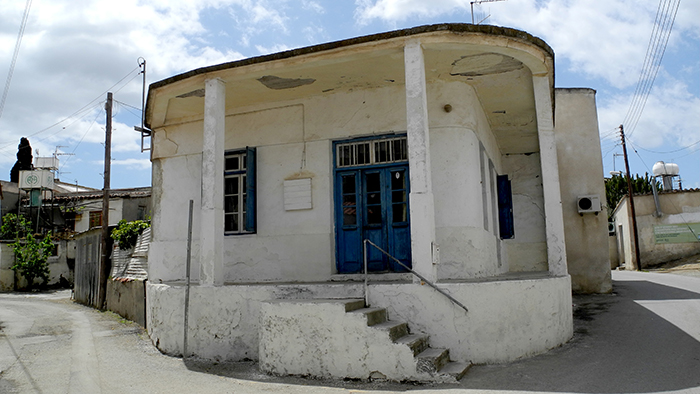 Kornos is a rural village located in the center of the three main cities of Nicosia, Larnaka and Limassol. From Larnaka, it is about a 25-minute drive to Kornos. Here, pottery making traditions have endured for centuries and is still a source of pride for locals. The clay used to craft the pottery comes from the foot of Stavrovouni Mountain. 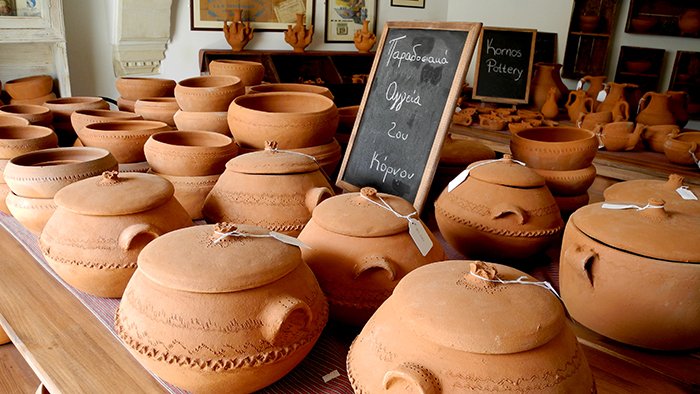 The result is reddish brown-colored. Flower pots, pitchers, bowls, urns, ovens and other decorative items and cookware are spun out of the wet, lifeless clay just as they were more than 300 years ago. Many of the finished pieces are then decorated with figures of birds, flowers, wavelike patterns and dots. After air-drying, each piece is then baked in a brick kiln for 10 to 12 hours. The Archontiko Papadopoulou Restaurant is an excellent place to see a potter in action. There is also a store on the property where pieces are sold. 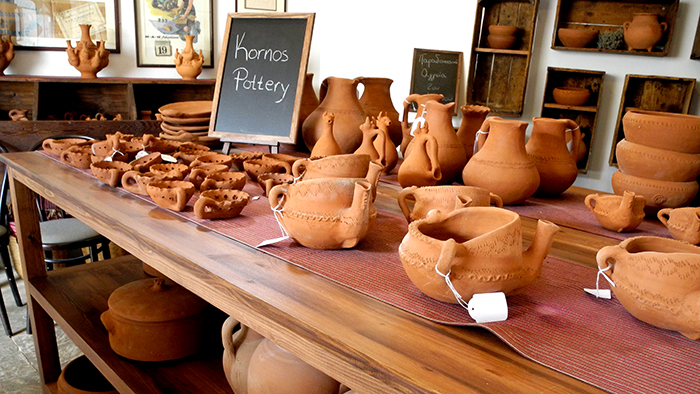 Walking around Kornos will reveal traditional Cypriot homes (about 40 in total) and friendly locals. Like most villages in Cyprus, much of daily life here revolves around the single Greek Orthodox Church. Kornos’ church is dedicated to St. John the Baptist. Kornos is also known for its honey and traditional halloumi cheese. About 1.5 kilometers south of the village center is the Kornos Picnic Site — a charming shaded public park where locals and tourists can enjoy fresh air and an al fresco picnic. 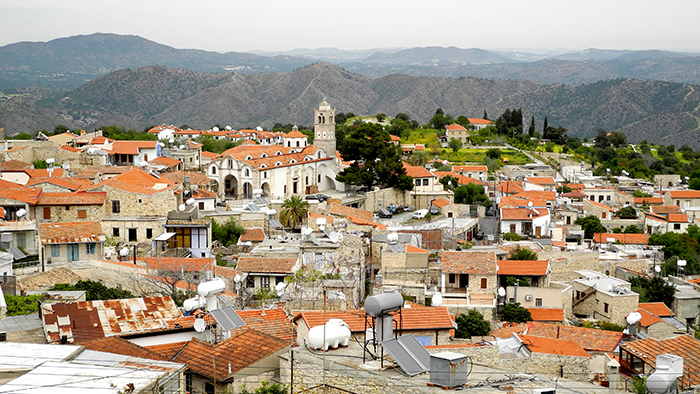 Lefkara is one of the most visited villages in the Larnaka region because of its deep-rooted lace making traditions, captivating architecture and amiable people. Beginning in the 14th century, embroidery and lace work (also known as Lefkaritika) became popular among Lefkara’s women. Leonardo Da Vinci once visited Lefkara. 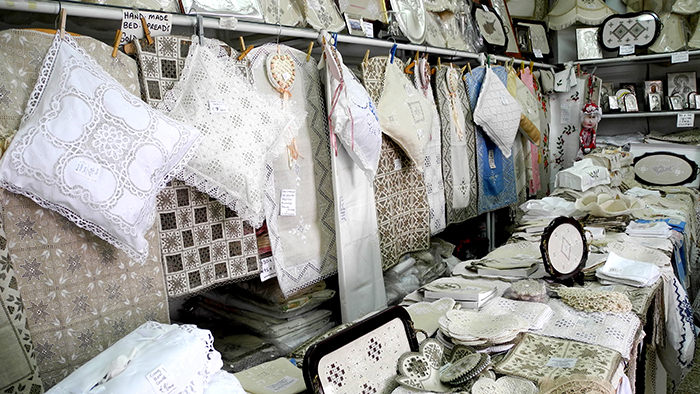 He returned to Italy with Lefkara lace, which he then donated as an altar cloth to the Cathedral of Milan. His purchase spawned a craze with that particular pattern of lace now aptly referred to as the Da Vinci pattern. The 19th century brought an influx of merchants from other industries including wine, olive oil, silver and sweets. By the 20th century, the village’s lace trade had facilitated significant urban and cultural development. Lefkaritika is now on the UNESCO World Heritage list of intangible culture. 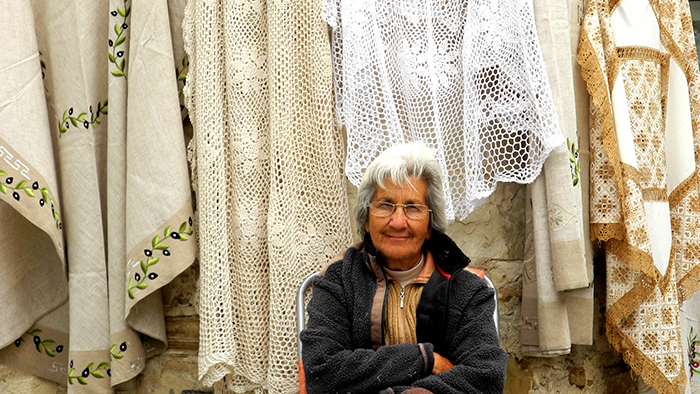 Lefkara is divided into Pano (upper) and Kato (lower) sections. Pano Lefkara is mostly residential while Kato Lefkara is home to the village’s lace shops, restaurants, main square, church and museum. The Church of Timios Stavros dates back to the 14th century and houses a piece of the Holy Cross. It is the only church on the island to still have a split seating area for men and women, which was a custom of the time in Greek Orthodox service. The Church of Timios Stavros is open daily 9 a.m. – 12 p.m. and 2 p.m. – 5 p.m. Admission is free. 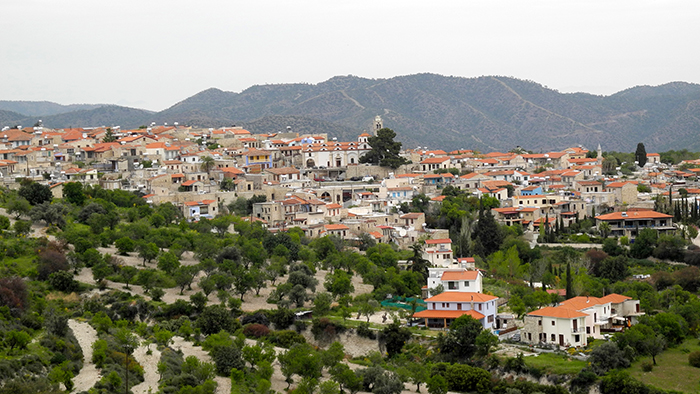 A visit to the Patsalos Museum, also known as the Museum of Folk Art, Traditional Embroidery and Silversmithing, is an ideal way to learn about the village’s unique past and living culture. 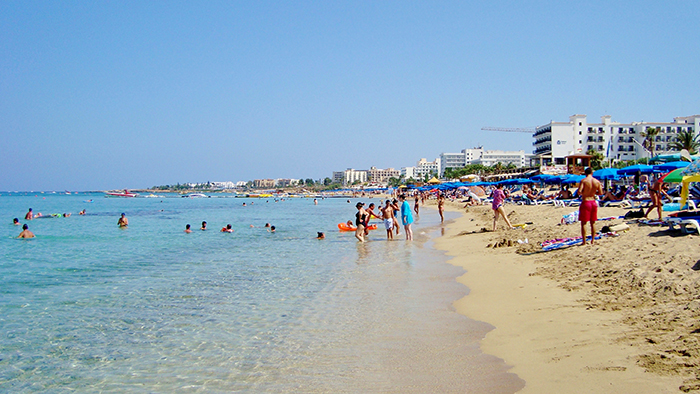 This coastal town has experienced significant strides in urban and tourism development since the 1974 Turkish invasion. Paralimni is the largest Greek-run community in the Famagusta district and a place for visitors to enjoy pristine Mediterranean beaches. The town does not boast any historical or architectural points of interest, but it does have a lively shopping district in its center. 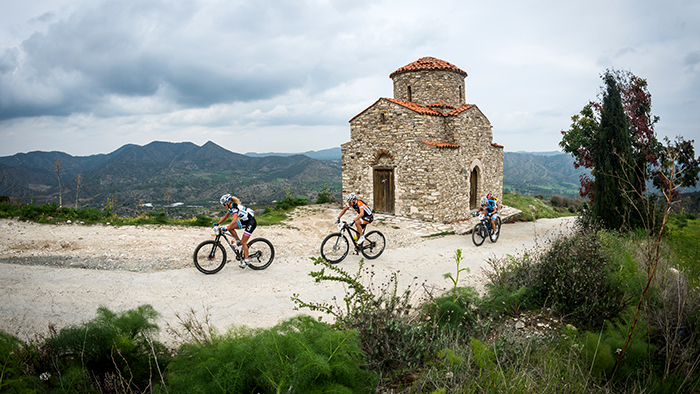 Voroklini, also known as Oroklini, is a beachside village only a 20-minute drive from Larnaka. While the village itself is known for its scrumptious cuisine, most visitors just pass through to photograph the outstanding panoramic views of the ocean. Voroklini sits on a hill, which gives it a distinct vantage point of the surrounding coastline. Voroklini has seen an increase in vacation rental properties, which have become quite popular with British tourists seeking some R&R. It is also conveniently located near other villages, several beautiful beaches, nature trails and wetlands.

The Voroklini wetland area supports many species of migratory birds including flamingos, and is popular with bird watchers. The nearby village of Pyla is only a five-minute drive from Voroklini. It is the only place in Cyprus where Greek and Turkish Cypriots live together. It is important to note, however, that the United Nations has a strong (and visible) presence here. Visitors are not permitted to take pictures near U.N. security points. 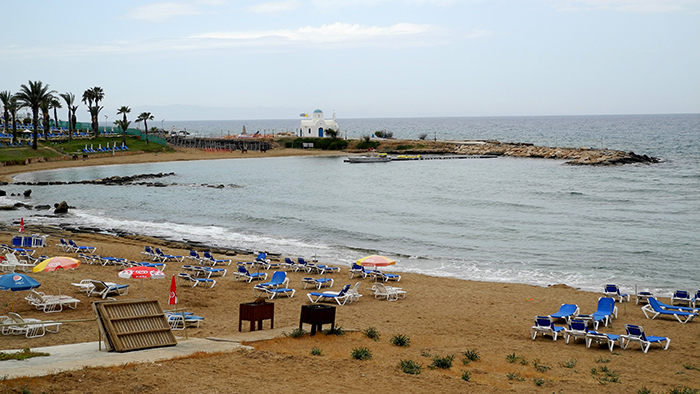 Protaras, while considered an autonomous town, actually falls under the Paralimni Municipality. It is a resort town equally as striking as Agia Napa, but with a more family-friendly atmosphere. Dozens of luxury hotels, international restaurants and nightlife venues make Protaras one of Larnaka district’s most attractive destinations. 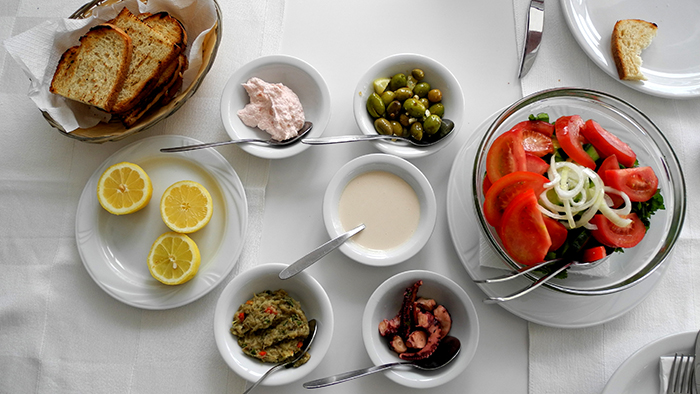 On the southern end of Famagusta Bay, just a 10-minute drive from Protaras, is the famed Cape Greco nature park. Here, the cliffs provide stunning views of the sea. There are also unusual rock formations, sea caves suitable for swimming, quiet beaches, nature trails and an endless supply of breathtaking views to experience. 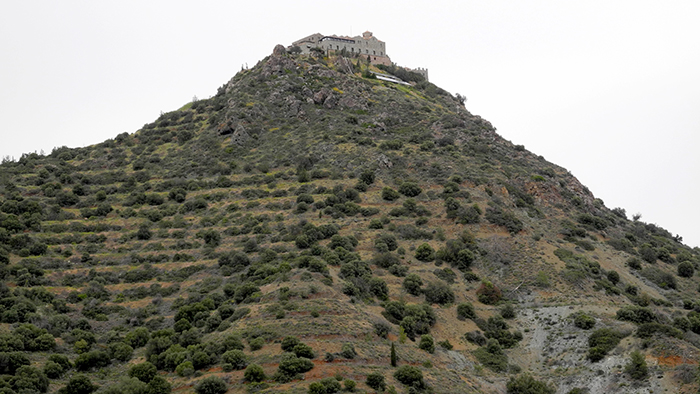 Stavrovouni is one of the holiest places in Cyprus and home to the Greek Orthodox Stavrovouni Monastery. Stavrovouni literally translates into “Cross Mountain.” Its name is derived from the piece of the Holy Cross it houses. The Church of Timios Stavros is the only other place on the island believed to have a piece of the cross. The monastery was founded sometime in the fourth century A.D. by St. Helena, the mother of Byzantine Emperor Constantine the Great. It is said that she brought with her pieces of the cross and other religious relics including a nail and a piece of the rope used to tie Jesus to the cross. 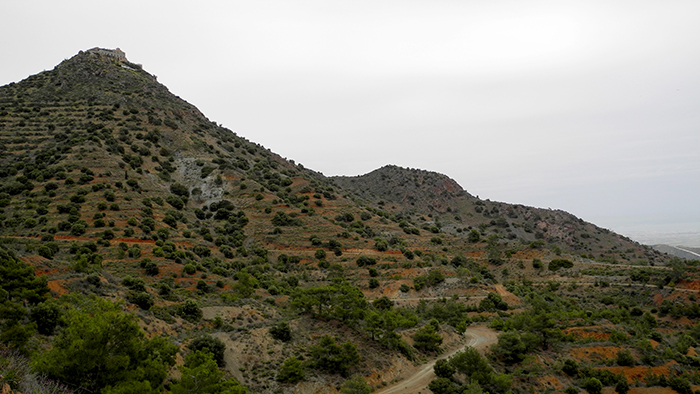 St. Helena was appointed by her son to collect religious relics from the holy land (present-day Palestine and Israel) and preserve them as best she could. According to tradition, she was stranded in Cyprus and had to leave a piece of the cross there. In addition to a life of worship, the monks of Stavrovouni are dedicated to icon painting. These are painted depictions of God, Jesus and the saints. Women are not allowed to visit Stavrovouni Monastery, but men are as long as they are dressed modestly. The use of cameras and video cameras is not permitted. Stavrovouni Monastery is open daily. Admission is free.

What are your recommendations for the best day trips from Larnaka? We would love to hear from you! Leave us a question or comment below.