Lugo is the capital city of the province of Lugo. With a population of 100,000, it is a lively hub of history, academia and gastronomy. Lugo is the only city in the world to be surrounded by completely intact Roman walls. Here you will learn about what to see in Lugo!

This commanding urban fortress is over 2,000 years old! It was built to protect the city of Lucus Augusti, which was founded in honor of Rome’s first Emperor, Caesar Augustus. Lucus Augusti was capital of the Gallaecia Lucense region of the Roman Empire – an area the Romans exploited for its gold mines and Miño River access. On December 2nd, 2000, the Roman wall of Lugo was officially recognized as a UNESCO World Heritage Site. 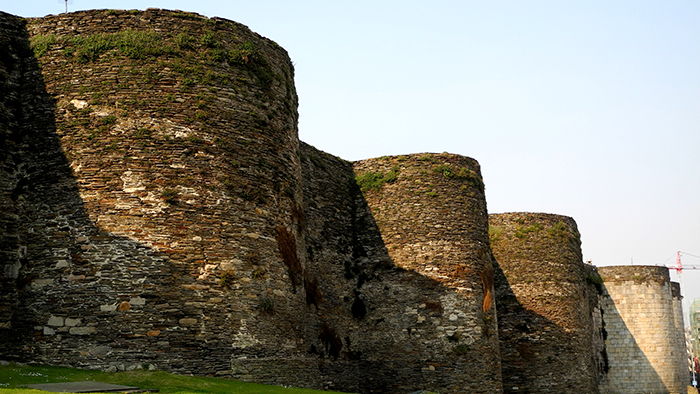 Housed within the massive walls is the old city; a blend of ancient and modern. Baroque, Romanesque and gothic buildings intermingle with contemporary constructions. The old city is small, but packed with character and charm. Narrow streets wind through it, all of them converging into the prazas, or squares. Beneath your feet are the remains of Lucus Augusti, above you is the two-kilometer-long pedestrian walkway that spans the length of the wall and alongside you is a visible reminder of the city’s Roman heritage. You are literally surrounded by history. 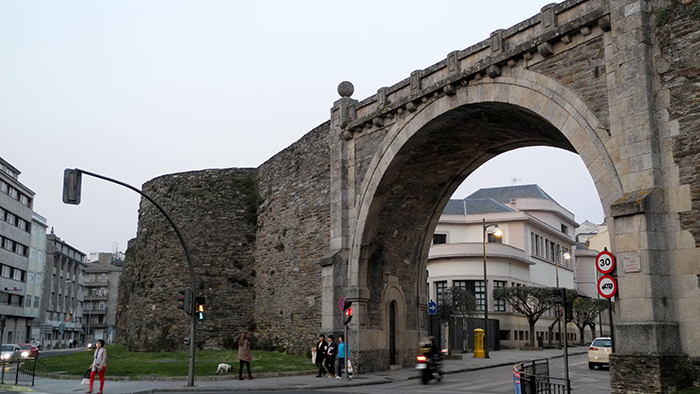 Lugo is home to the largest hospital in Galicia and satellite campuses of the University of Santiago de Compostela. The city’s unofficial motto, “Y para comer, Lugo” (And for eating, Lugo), is a testament to its exquisite cuisine. With the Cantabrian Sea only an hour and a half away, local farms abound, and its proximity to the Miño River, Lugo’s restaurants have top choice of a plethora of fresh ingredients. Foodies love Lugo for this reason. It is also a place that adventurous eaters will love too. Perhaps the most beastly among menu items is the lamprea, or lamprey fish. This blood-sucking, snakelike creature spawns in the rivers of northern Spain. While lamprea dishes are tasty when prepared correctly, many do not like the iron-flavored aftertaste. Lamprea season is from February to May. Here is everything what to see in Lugo, Spain! 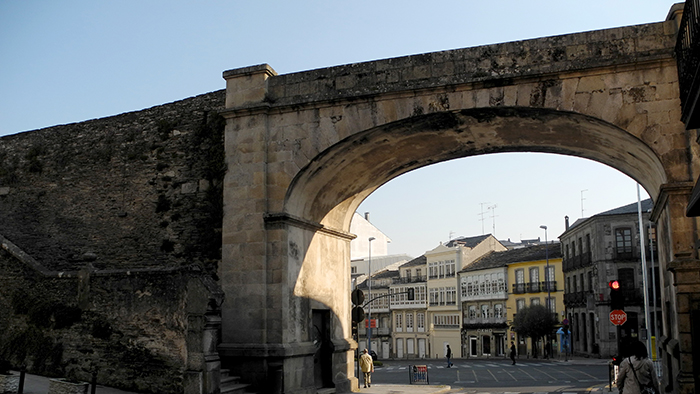 Lugo’s old city, or casco antiguo, is encircled by 2,266-meter-long protective walls. The city of Lucus Augusti was originally commissioned in 15 B.C. by Paullus Fabius Maximus, an elected official of the Roman Empire responsible for the eastern provinces of Gallaecia. Lucus Augusti was strategically located along the Miño River, thus making it particularly susceptible to outside attacks. 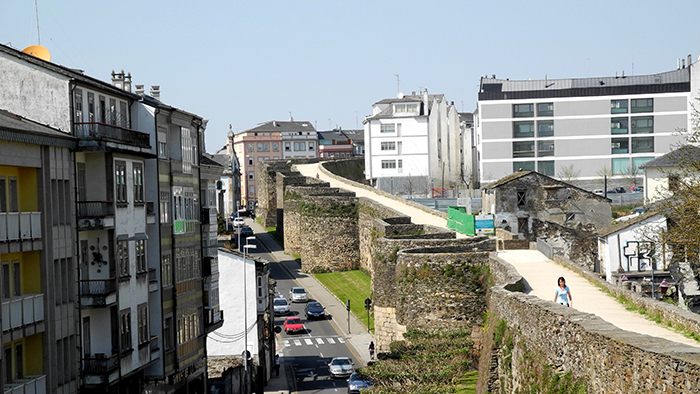 To protect the city against Alemannic invaders, six-meter-thick stone walls were erected sometime between 263 and 276 A.D. The original construction had eighty-five semi-circular towers housed spiral staircases that led to the top of the structure. For added protection, a five-meter-deep and 20-meter-wide moat ran alongside the exterior. But nothing lasts forever. Lugo fell into enemy hands in the early 5th century.

Check out What to See and Eat in Ourense, Spain 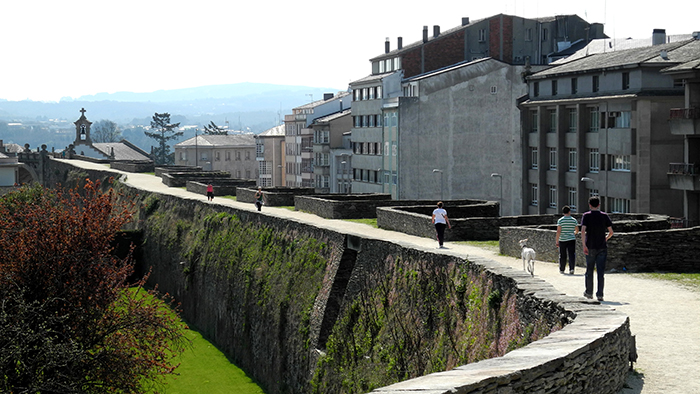 The subsequent five centuries brought Visigothic, Moorish, Spanish and Norman invaders. It wouldn’t be until the 10th century that the walled city would begin to be restored. Of the original fortress, only 71 towers, three gates and one of the defense bastions, the Tower of A Mosqueira, remain. New gates have since been added to allow for passage of modern vehicles. 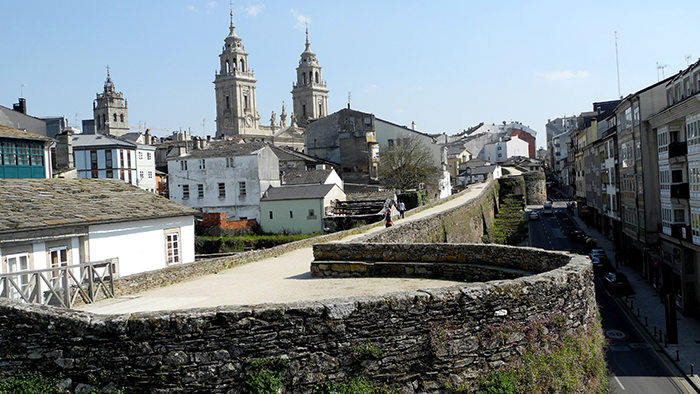 As per the UNESCO Organization, the Roman walls of Lugo are, “the finest example of late Roman fortifications in Western Europe.” And this is surprising considering the city was burned more than once. Upon arrival to the old city, the immense walls command everyone’s view. Once inside, a total of six stairways lead to the upper promenade. Here are the best views of the old city. Dog walking, jogging and walking are the usual activities taking place daily along the promenade. 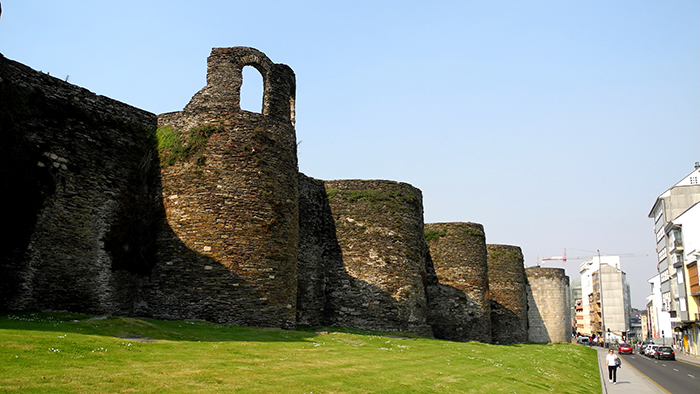 If you are up to walk about a mile and a half around the entirety of the old city, you are in for beautiful sights and unrivaled people watching opportunities. But keep in mind that the promenade is not shaded, so get there during early morning hours to avoid the heat. 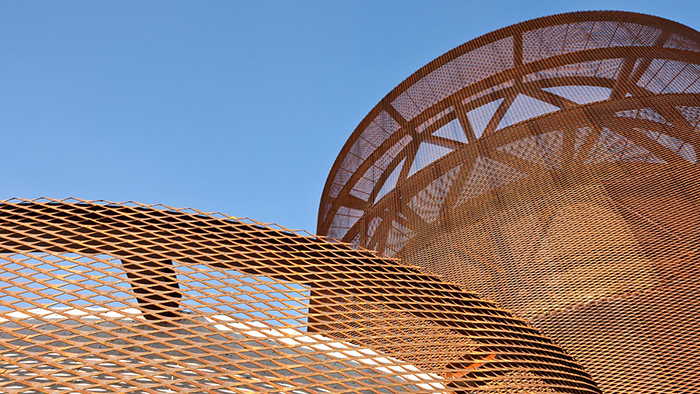 Once inside the walled city, visitors are greeted by a juxtaposition of ancient and contemporary surroundings. The Roman Wall Exhibition and Information Center is the best starting point for a day of sightseeing. Here, pamphlets and maps are distributed, and access to the top floor exhibition rooms is granted for a fee of €2. The Roman Wall Exhibition and Information Center is located in Praza do Campo in a Baroque building near the Porta de Santiago gate (hours of operation are from 10:30 a.m. to 2 p.m. and 4:30 to 8 p.m. seven days a week). 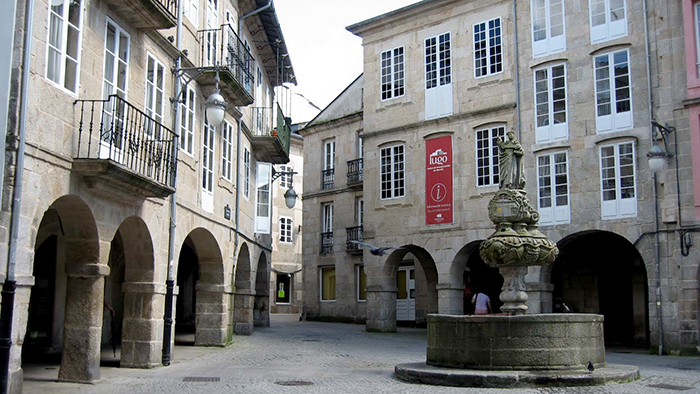 Praza do Campo is a triangle-shaped square. During the Middle Ages, it was the city’s main marketplace. Rúa Nova and Rúa do Miño are the two main streets leading out of Praza do Campo. Just steps from Praza do Campo are the Cathedral and Bishop’s Palace. The Cathedral was modified several times since its original construction in the 12th century. It contains Romanesque, Gothic and Baroque elements throughout. The Cathedral’s central apse chapel, which is dedicated to the Virgin Mary, is an impressive work of art. It was made by famed Baroque designer, Fernando de Casas Nóvoa, who also designed the Obradoiro façade of the Santiago de Compostela Cathedral. 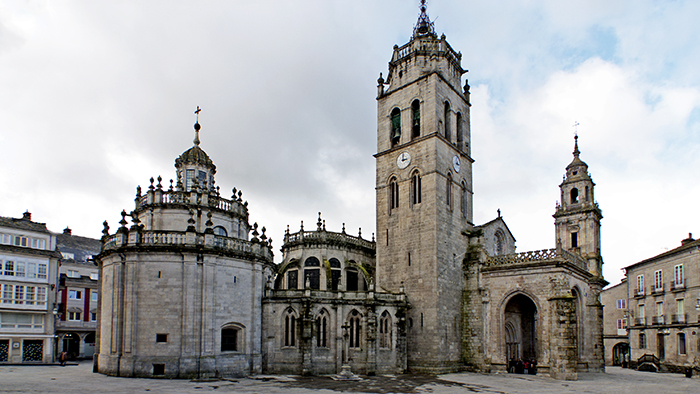 Not far from the Cathedral, close to the old prison, is Praza Maior. Here is one of Galicia’s most striking Baroque buildings, the Concello de Lugo, or town hall. It was built in 1738 by Lucas Ferro Caaveiro and features dramatic arcades, two large balconies and a clock tower. 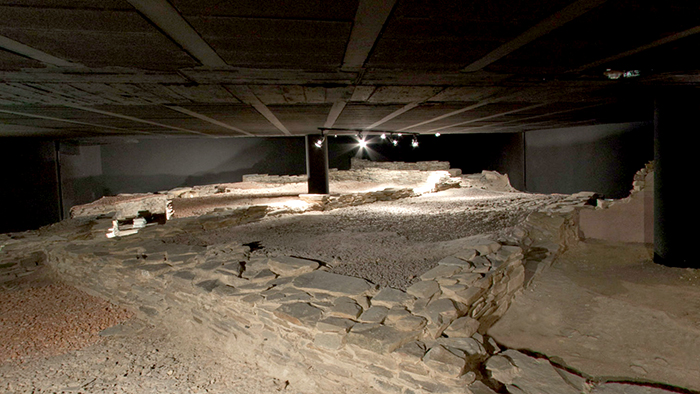 At the intersection of Rúa Conde Pallares and Rúa Doutor Castro is another interesting bit of history left behind by the Romans. The Batitales Mosaics House is an underground exhibit of an ancient Roman domus (a large single-story house belonging to a wealthy member of Roman society). Here visitors will see the uncovered remains of Domus Oceani. A short audiovisual display is played and then visitors are allowed to take a take a short walk around the ruins and mosaics depicting ocean life.

Check out The 10 Things to Do in Vigo, Spain 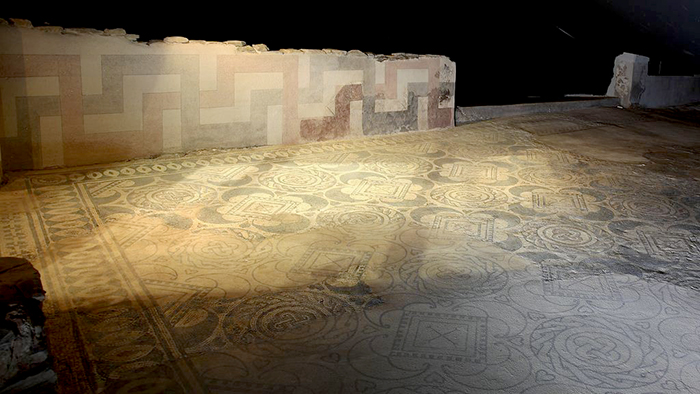 Several lovely churches are located within the old city and just beyond the Roman walls. 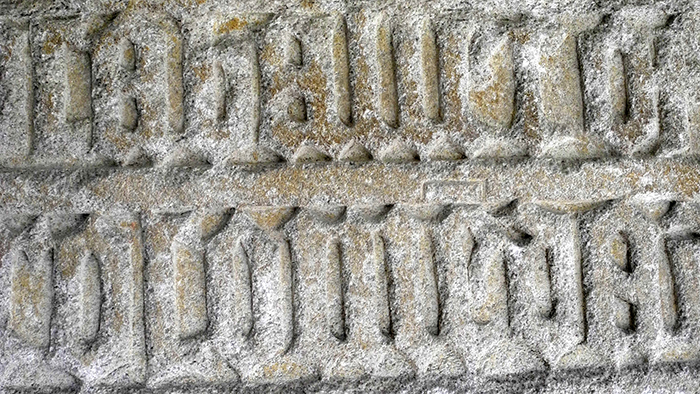 No visit to the old city is complete without first dropping by the Provincial Museum for a lesson in local culture. Located in the heart of the old city inside a former convent, the Provincial Museum is a two-story building with 32 galleries exhibiting Roman-era mosaics, contemporary paintings and everything in between. Some items on display include religious art, medieval texts, Roman milestones, sundials and prehistorical artifacts. Visitors can also tour the original kitchen, refectory and cloister of the former convent. 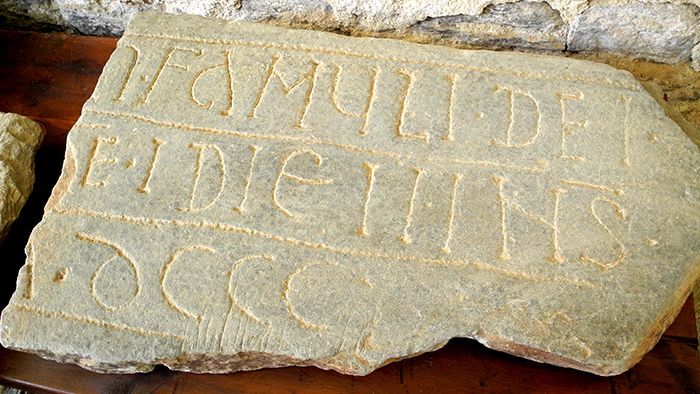 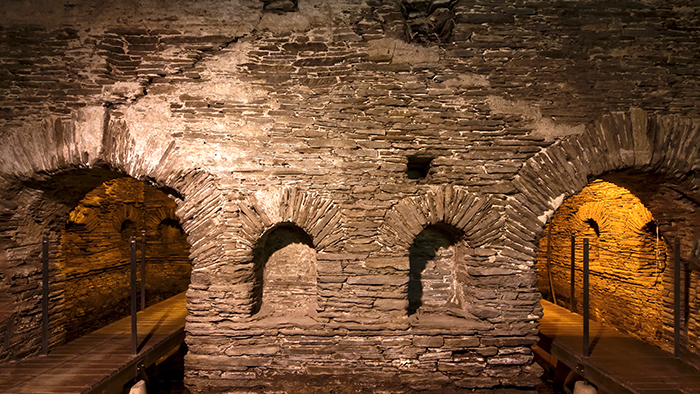 Just one kilometer from Porta Miña gate are the Roman baths and bridge. The Termas Romanas, as they are called, are located in the Balneario Hotel but open to the public. Only a fragment of this Roman bath complex remains intact, but visitors can still see where the different pools, heated and non-heated, were situated. To visit, go to the front desk of the Balneario Hotel and ask to see the baths. The Balneario Hotel is located at Barrio da Ponte, s/n (Tel: +34 982 221 228). Admission is free of charge. 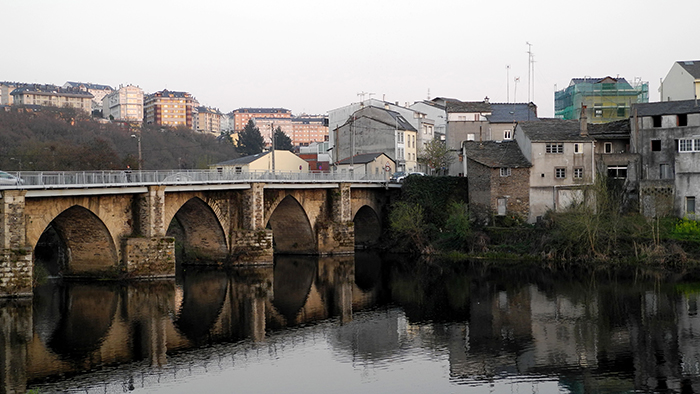 The Roman bridge is also located outside, but near the old city. It crosses the Miño River and was used by Romans to cross into Bracara Augusta, the modern-day city of Braga, Portugal. It is a stunning structure that photographs well at dusk. 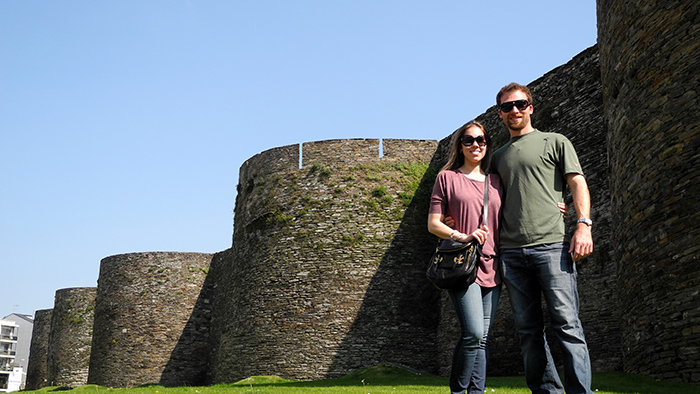 Lugo is a place unlike any other in the world. This unique World Heritage Site is a treat for lovers of Roman history, who like myself, seek out the best monuments from that era. The walls command your view and dwarf every modern construction around them. Walking along the top of the walls allows for the best pictures of the old city. Enter through one of the original gates and experience a singular medley of Medieval and modern.

Lugo is an ideal base from which to explore the Ribeira Sacra region. Ribeira Sacra’s winemaking traditions have long been in place since the Romans began producing the sweet nectar here over 2,000 years ago. Many people, even wine enthusiasts, have never heard of this area of Spain. But the wines found here are made with special care and skill. Reds are more prominent than whites, and every vineyard has its own way of growing, aging and bottling their wines. The Ribeira Sacra region is one of Spain’s hidden treasures that cannot go unseen.

Getting around: The best way to get around the old city is on foot. There are designated parking lots, however spaces are limited.

Shopping: The old city has a variety of chain stores like Zara and H&M, as well as small boutiques. Specialty items to shop for in Lugo include hand-woven tapestries, ceramics and artisanal furniture.

Nightlife: Stroll around the old city center to find your desired nighttime destination. Tapas bars, open-air cafés and lively clubs are scattered throughout the city. Begin your evening with some local wine then see where the night takes you. Many places do not open until midnight but stay open until 6 a.m. Live bands and energetic disc jockeys will help you stay awake like a local. The people are friendly and open, and dress code is casual. Bring cash and have fun.

Best time to go: May to October. The weather can be unpredictable all year round, so pack an umbrella, rain boots and a coat.

What are your recommendations about what to see Lugo, Spain? Leave us a question or comment below!

One thought on “What to See in Lugo, Spain”