During my Viking River Cruise from Bavaria to Budapest, I had a day to explore the beautiful town of Krems. This is a picturesque Medieval town situated at the east end of the Wachau Valley.

Krems is home to colorful, historic buildings that make it the perfect place to explore in a day or less. Here are 5 things to do in Krems that I particularly enjoyed during my time there. 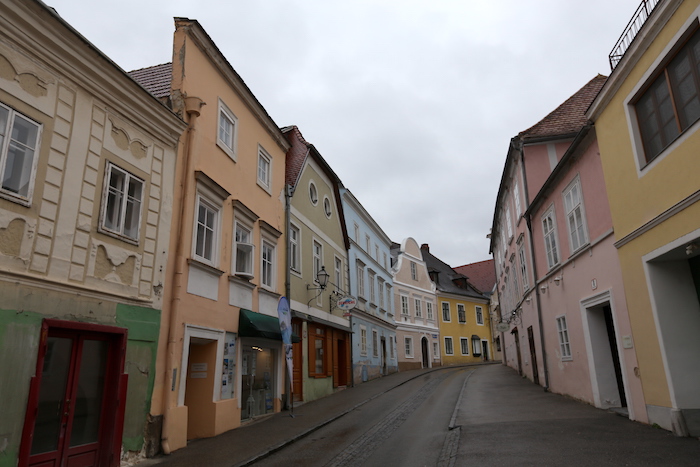 First here’s some background: Krems is the 5th largest city in Austria and is located 43 miles west of Vienna. It sits at the confluence of the Krems and Danube Rivers and was first mentioned back in 995 as an established town. Krems has an impressive claim to fame – it is the location of the oldest grave in Austria, a child’s grave that is over 27,000 years old. It was also one of the first places in Austria to produce coins, back in 1130. 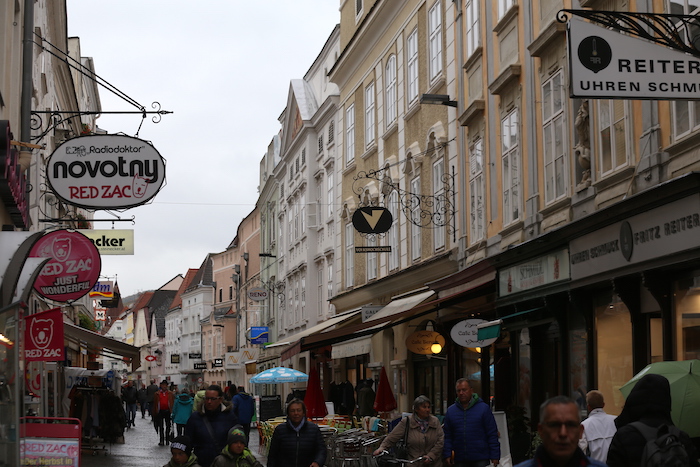 Winemaking traditions have existed here since the time of the Celts. When the Romans arrived, they brought their advances in viticulture with them. During the Medieval period, winemaking really took off here. The area is also known for the production of an apricot brandy called Marillenschnaps. 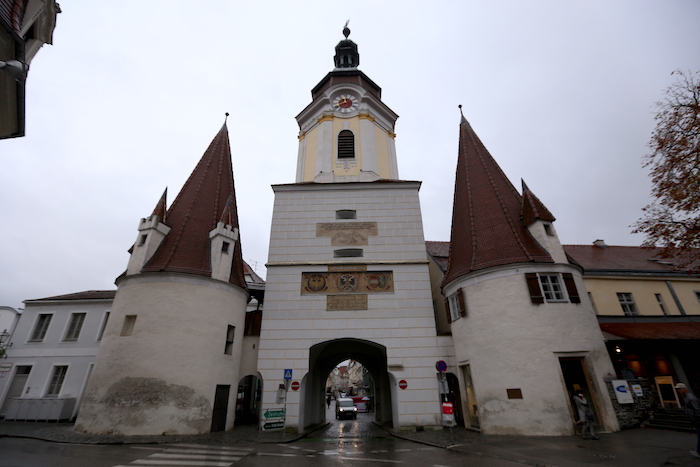 Steiner Tor is a 15th century preserved gate and is the symbol of the city. Until the end of the 19th century, Krems was completely surrounded by a medieval wall and four city gates until they were all removed as the city expanded. 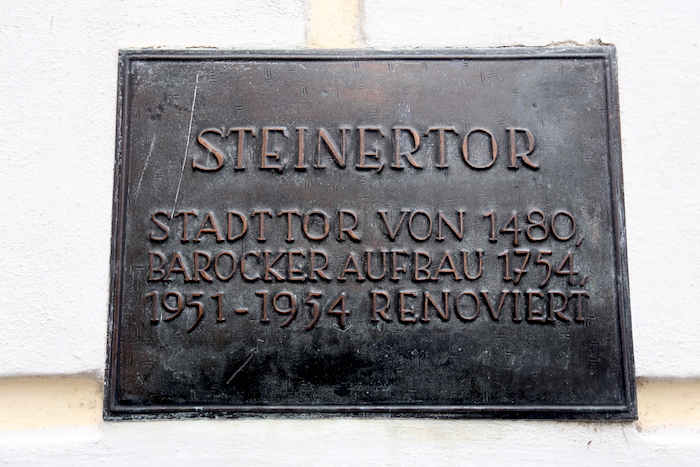 Two of the towers standing on both sides of Steiner Tor are all that remain. Look for the small coat of arms dating from 1480 that mentions Emperor Friedrich III. It is believed to commemorate restoration work done after the destruction caused by the Hungarians. There is also a commemoration of a flooding incident in 1573. 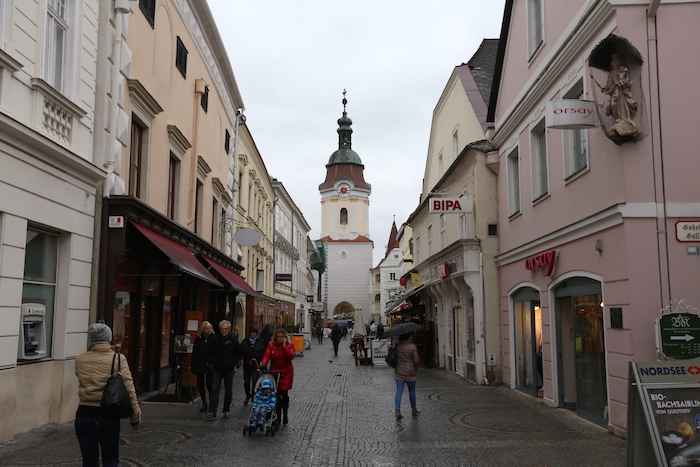 In 2005, Krems celebrated the 1,000-year anniversary of the city and in celebration, they restored Steiner Tor to its former glory. The gate gives you a great glimpse of what medieval Austria would have looked like and it is also a great spot for photos! 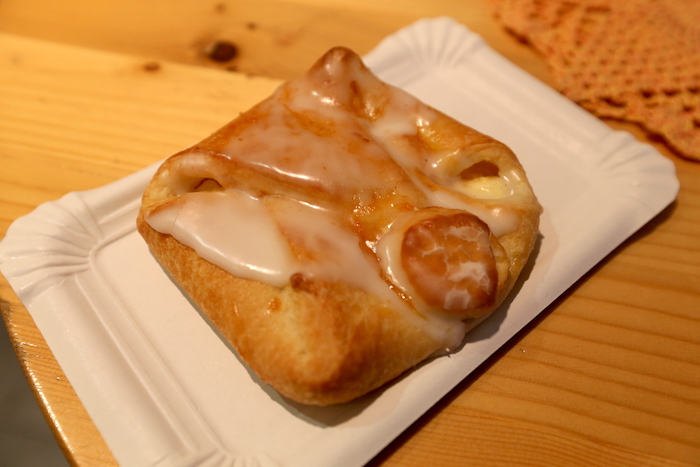 If you’re in town for breakfast (or anytime) I recommend you try a traditional Austrian pastry called Topfengolatschen. It’s similar to apple strudel but filled with cheese. I was told to try it at Schmiedl, a bakery located on Obere Landstrase, the main shopping street in the old town. 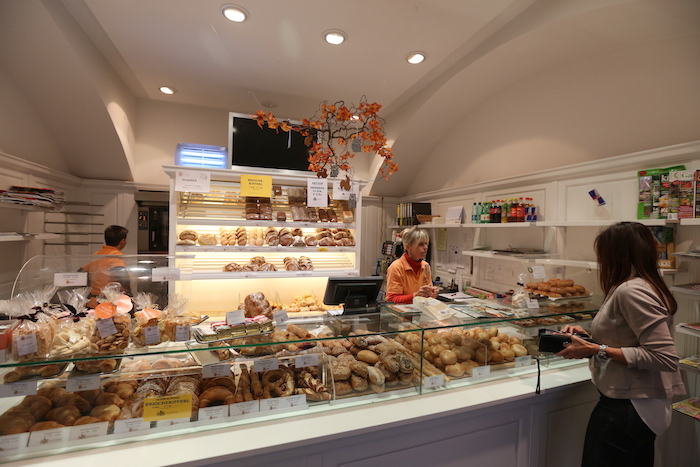 The bakery has been around since 1780 and is famous for their pastries and coffee. Topfengolatschen is delicious and very filling! I highly recommend trying it in Krems, but you can also find it throughout Austria. 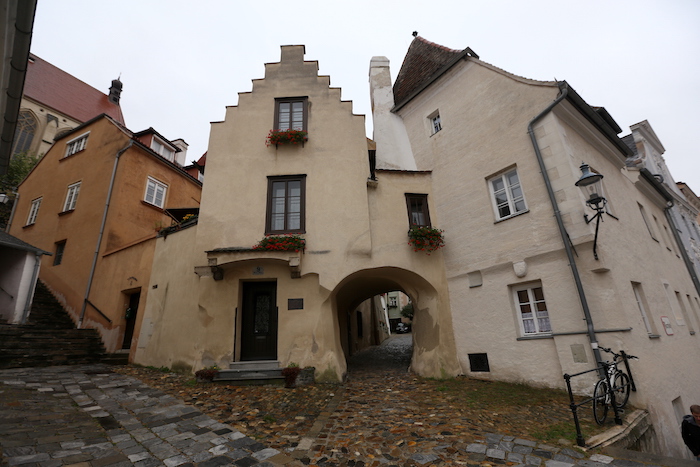 Krems was one of the richest medieval cities in the country due to its wine production. For over 500 years, the people of Krems expanded their town and created many beautiful buildings. But in the 17th century, it was plundered and the building work stopped. This means that there are several preserved medieval buildings to see. 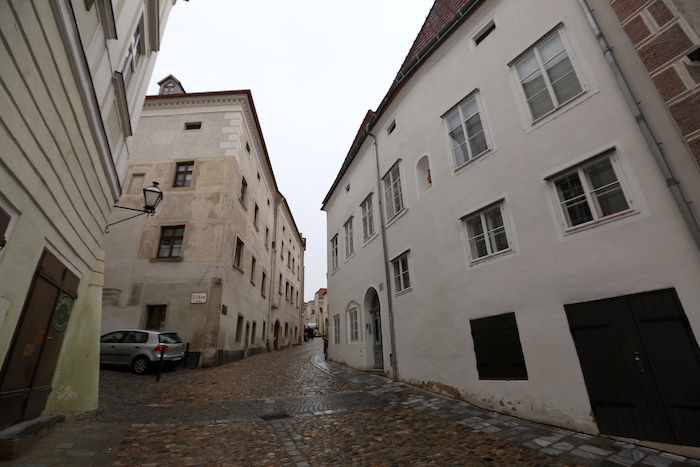 If you follow our route, you would start at the Landstrasse, the pedestrian area in the center of the town where you can do a little shopping. From there, check out the Bürgerspitalskirche Church, built on the former Jewish Ghetto and associated with the neighboring hospital. 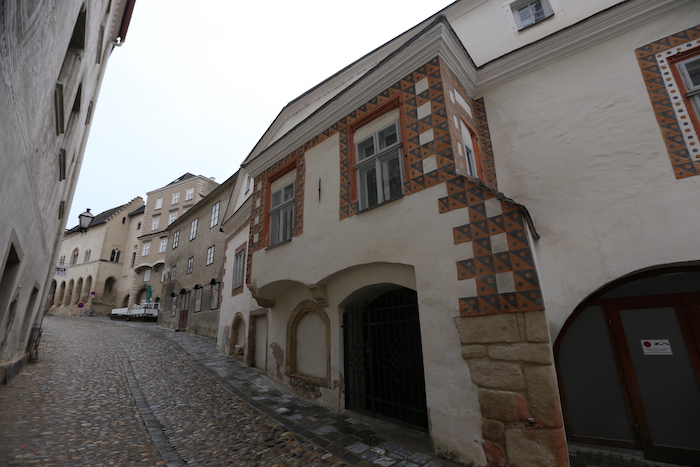 The Town Hall is a Renaissance-style building with an impressive arcaded courtyard. There are lots of small alleys with cobblestone streets to explore from where you can step back in time to medieval Krems. 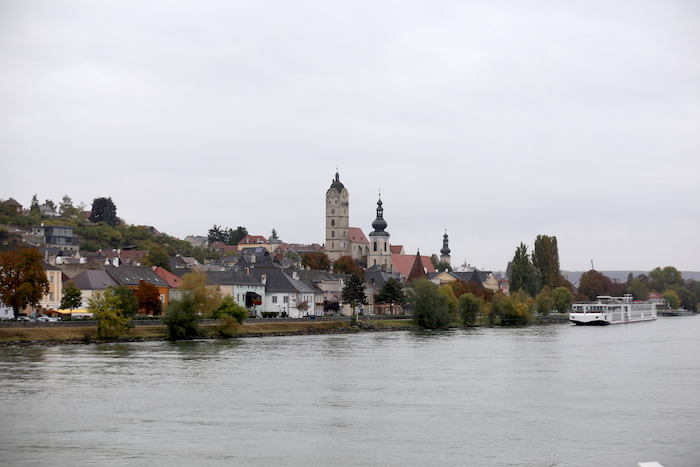 Stein an der Donau is Krems neighbor up the road from Krems, situated along the banks of the Danube River. The small town forms part of the Wachau Valley UNESCO World Heritage Site. 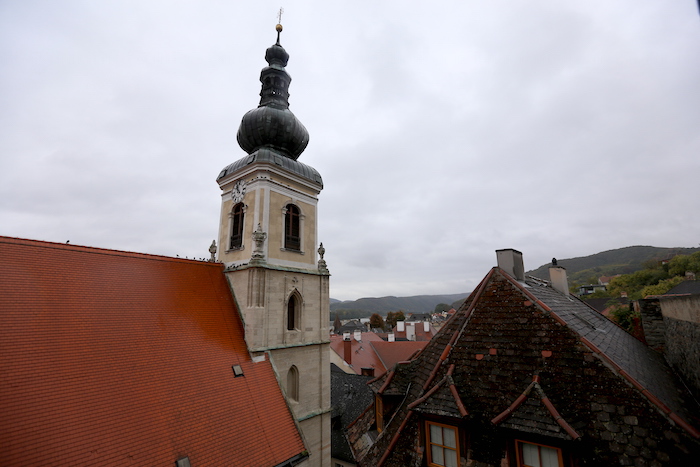 If you visit Krems on a river cruise like I did, tStein an der Donau is likely where you will dock. Some of the attractions you can visit there include the Frauenbergkirche Church dating from the 14th century and the Parish Church right below it. The Parish church dates back to the 12th century and is a great example of gothic Austrian architecture. 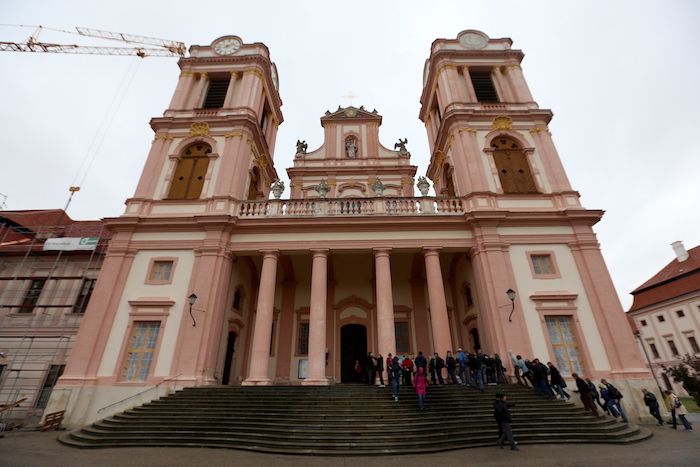 Just a 10-20 minute drive south of Krems is Gottweig Abbey, a Benedictine Abbey dating back over 1,000 years. The Abbey complex is expansive, made up of a walled courtyard, gardens, the main abbey and a cloister with a crypt. 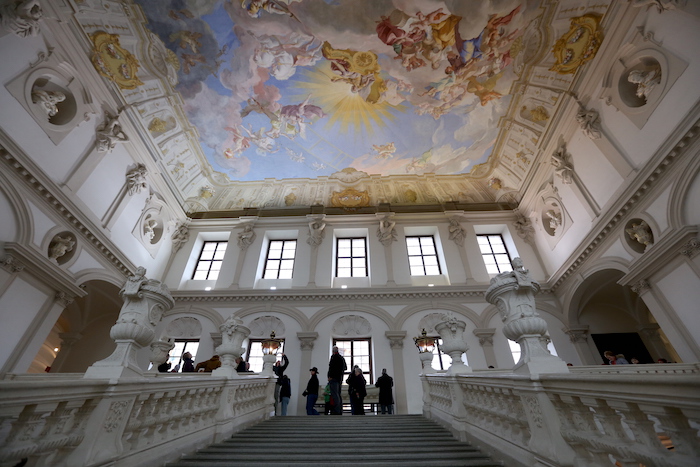 We started our visit by watching a film about the history of the Abbey. We then  took a tour around the main Abbey and visited some of the old rooms. Finally, we stopped by the cloister and the crypt. 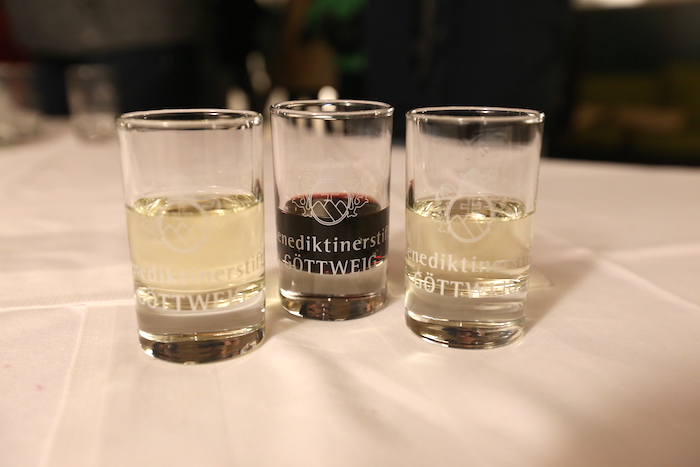 Once we finished touring the grounds of the abbey we had a chance to try some of the famous apricot wines. We tried some whites, some reds and even some Marillenschnaps (apricot brandy), which was delicious! 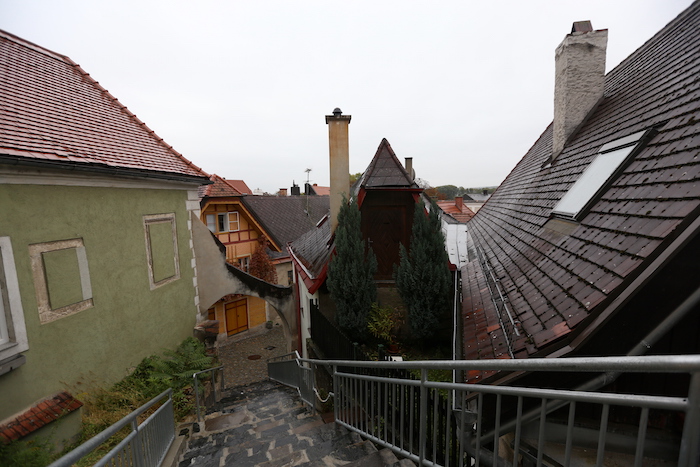 Getting there: Krems is just an hour’s drive from Vienna so it makes an excellent day trip. You can drive west on the S5 road from the capital. There is a regular train from Vienna as well as connections to St Polten and Spitz.

Staying in Vienna for a day or more? Check out our list of 5 Cafes You Should Visit in Vienna 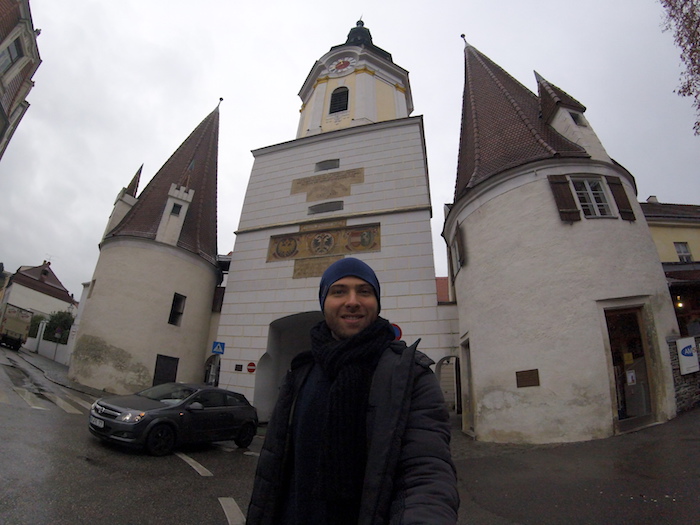 This picturesque medieval town has much to offer, from the historic buildings to cafes, offering speciality Austrian food and, of course, the wines. It is often said to be one of the most scenic towns in Austria and is definitely worth visiting if you get the chance. 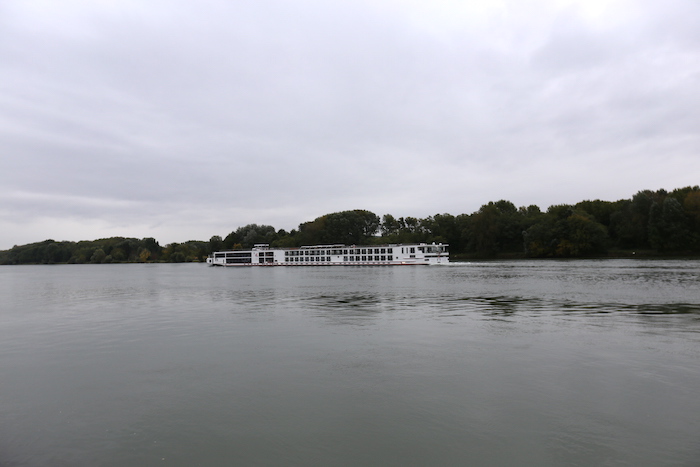 What did you think of the 5 things to do in Krems, Austria? Leave a comment below! If you plan to visit the city, I can recommend using Viking Cruises from Bavaria to Budapest – this was how I travelled during this visit.

3 thoughts on “5 Things to Do in Krems, Austria”