In the center of the Balkan Peninsula, situated roughly midway between the Black and Adriatic Seas at the foot of Vitosha Mountain, is the Bulgarian capital of Sofia, a large, diverse city that boasts a long and fascinating history, world-class shopping and dining, and posh accommodations. Because of this, a list of the 10 things to see and do in Sofia can be as specific or as wide-ranging as you prefer, but for this article, David’s Been Here aims to recommend a bit of everything. 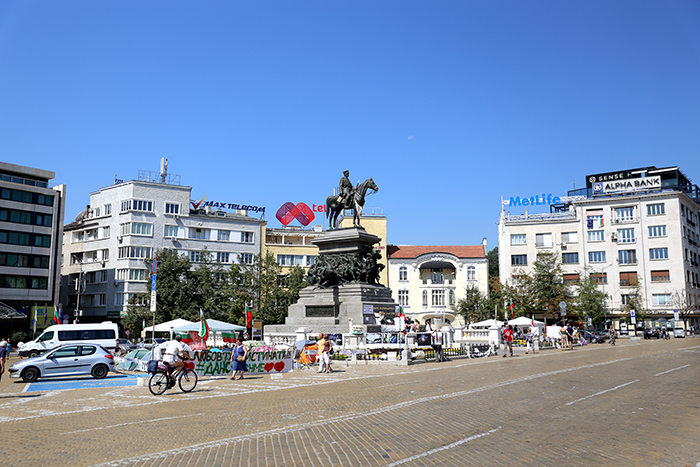 Since it was first settled by the Thracian Tilataei tribe around 7000 BC, Sofia has been raided by goths, burned by the Huns, taken by the Ottomans in the Bulgarian-Ottoman Wars, been occupied by Russians in the Russo-Turkish War of 1828-1829, bombed by Allied forces during World War II in 1943 and 1944, and renamed several times. While Sofia’s several-millennia-long existence can be explored further at many of the city’s attractions, there is also plenty to see and do even if events of the past don’t strike your interest. These are the 10 things to see and do when you go to Sofia, Bulgaria. 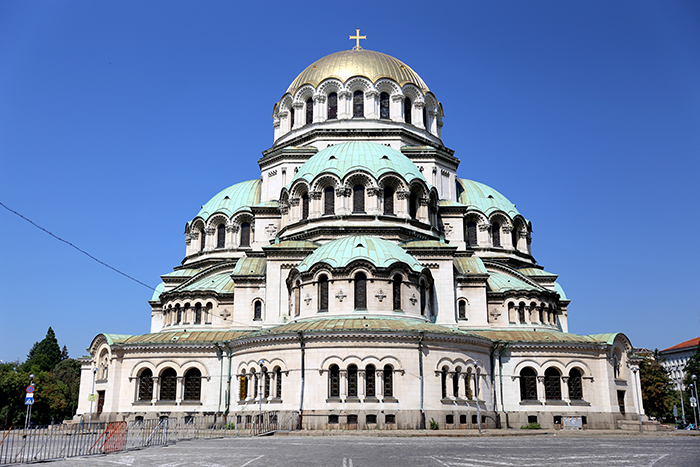 The first attraction on our list is the dazzling Alexander Nevsky Cathedral, a Bulgarian-Orthodox cathedral that was built between 1882 and 1912 in the Neo-Byzantine architectural style, which was popular for 19th-century Russian churches. At 34,100 square feet in area, it is the largest church in Sofia and one of the largest Eastern Orthodox cathedrals in the world. One of the church’s defining features is its gold-plated central dome, which stands over 150 feet above the ground when the cross atop it is included. Inscribed in thin, gold lettering around the inside of the dome is the Lord’s Prayer. 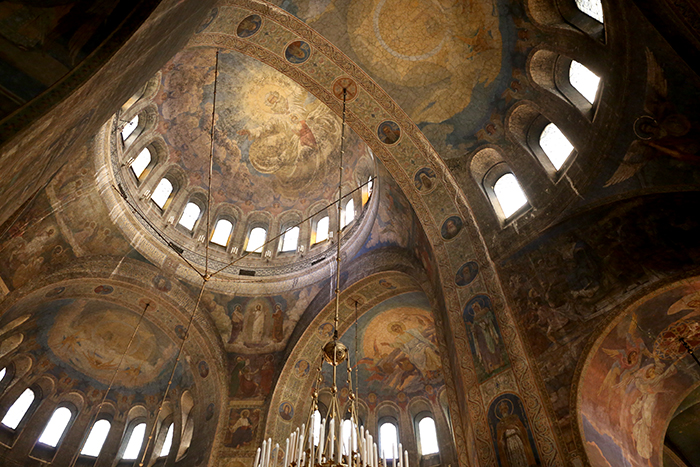 To the left of the altar, inside the cathedral, is a case that displays a relic, likely a rib, of Alexander Nevsky, who served as the prince of Novgorod from 1236 to 1252. Inside the cathedral’s crypt is a museum showcasing Bulgarian icons, which according to the church, contains the largest collection of Orthodox icons in Europe. 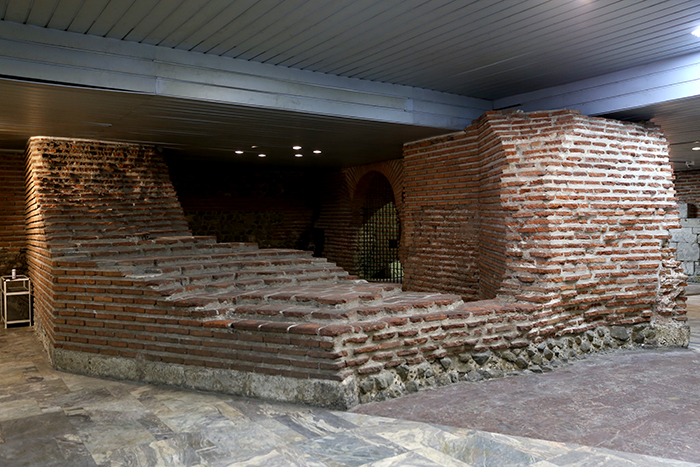 Sofia’s time as part of the Roman Empire can be explored in a very unconventional location: the Serdica Metro station. During the classical antiquity period, when Sofia was still known as Serdica, the city was protected by a fortified wall that boasted observation towers and four gates facing north, south, east, and west.

Check out 15 Places You Must Visit in Bulgaria 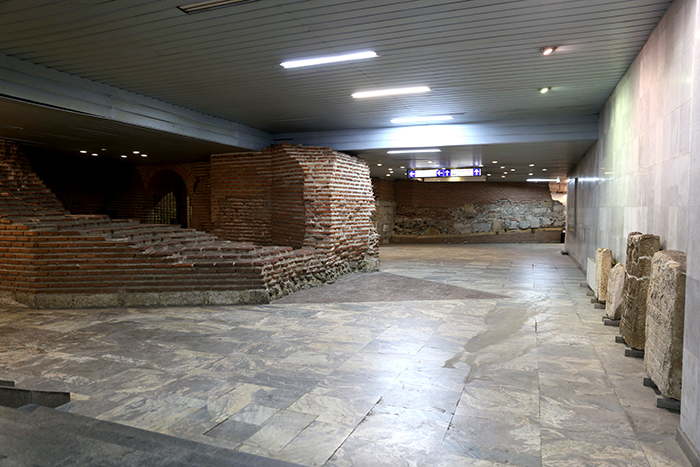 The eastern gate was defended by two towers and was excavated in the vicinity of the Metro station along with luxury villas with sewer systems, water mains, and paved streets, by archaeologists between 1997 and 1999. Archaeological excavations to unearth and restore the western gate resumed in 2011, and seven 4th-century color floor mosaics were discovered at the site, which lies next to St. Joseph’s Catholic Cathedral in downtown Sofia. 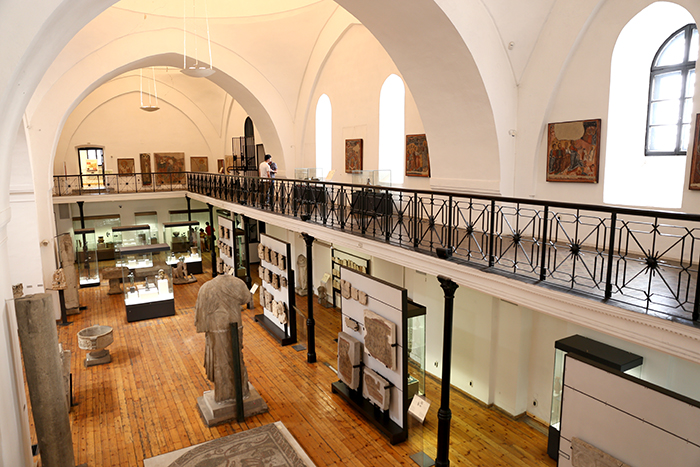 A must-see for history and archaeology buffs of all ages is the National Archeological Museum in the center of Sofia. It is the oldest museum in the country and is located in what was once the city’s oldest and largest Ottoman mosque, Koca Mahmut Paşa Camii, which was built between 1451 and 1494. The museum officially opened in 1905, by which point all of the archaeological exhibits that had been kept all over the city had been moved to the former mosque. 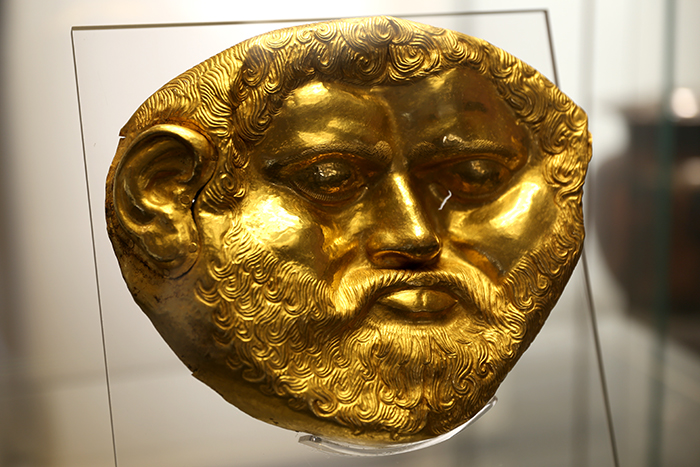 The museum’s Prehistory Hall houses items that date between 1,600,000 BC and 1,600 BC, while the Treasury Hall displays artifacts from the late Bronze Age to Late Antiquity, including the well-known Valchitran and Lukovit Treasures. Ancient Thracian, Greek, and Roman artifacts can be found in the Main Hall on the first floor, including the priceless gold Thracian burial mask, and an array of medieval books, drawings, woodwork, metal objects, and more can be found in the Medieval Hall. 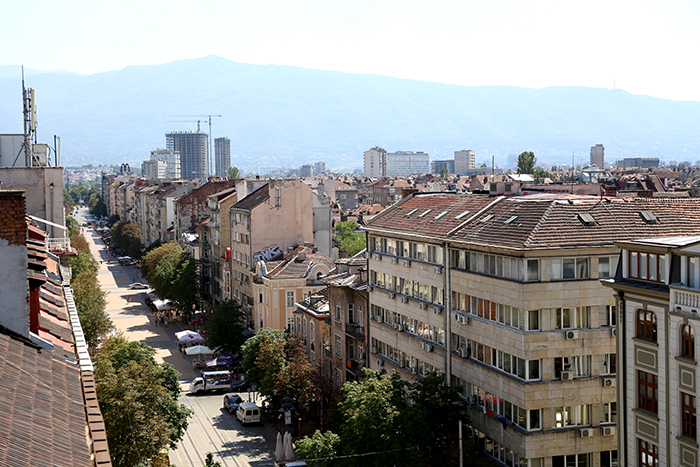 Named after the mountain that Sofia rests at the foot of, Vitosha Boulevard is the main commercial street in town. Tourists looking for Sofia’s highest-quality shopping or a quick meal should look no further than this pedestrian-friendly street, which is lined with dozens of high-end boutiques, restaurants, cafés, bars, and hotels. 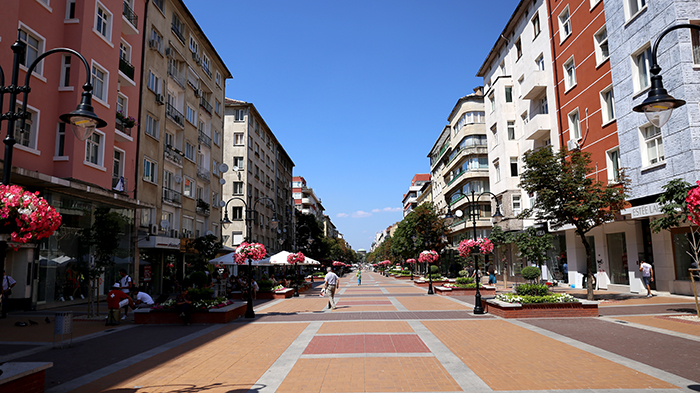 A steady stream of visitors frequents this street throughout the day and night, especially after 5 or 6 p.m, and its central location makes it a great place for tourists to stay during their time in the city. 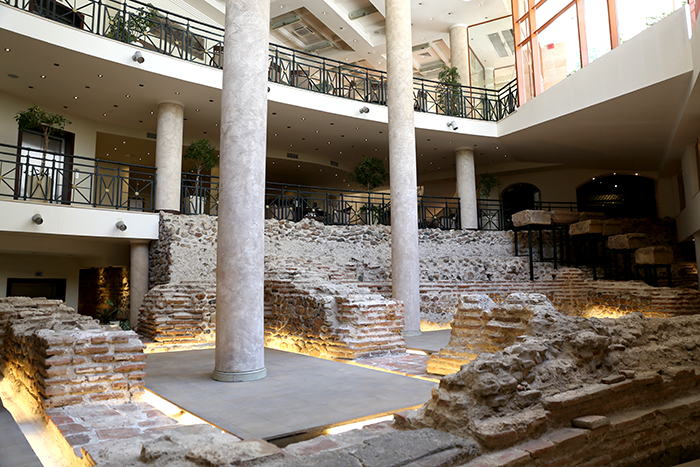 Because Ancient Serdica is buried under the city, there are quite a few sites that have been unearthed amid the glass-and-concrete buildings and attractions of modern-day Sofia, including the Arena di Serdica, or Serdica Amphitheatre. Located in the basement level of the Arena di Serdica Hotel on Budapeshta Street in the city center, the Roman walls of this archaeological discovery were unearthed during the construction of the hotel in 2004. 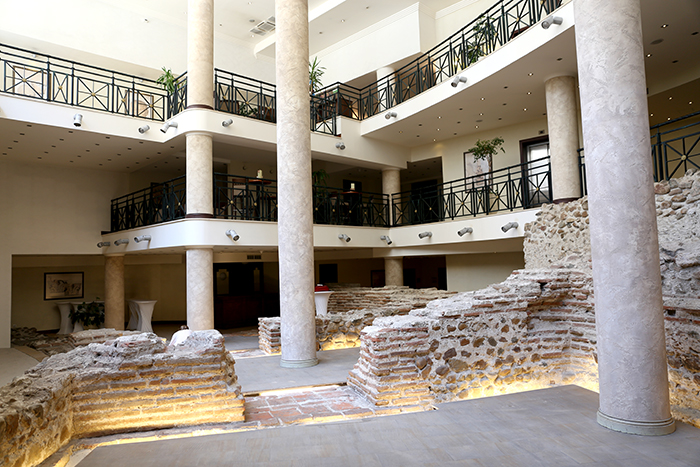 Since then, ancient coins and pottery have been uncovered, as well as a complex containing an amphitheater and a theatre that dates back to the 2nd or 3rd century. If you look closely, you may be able to spot some paw prints in the ceramic stone that were left seven centuries ago. The amphitheatre is free to visit and is one of the city’s most fascinating attractions. 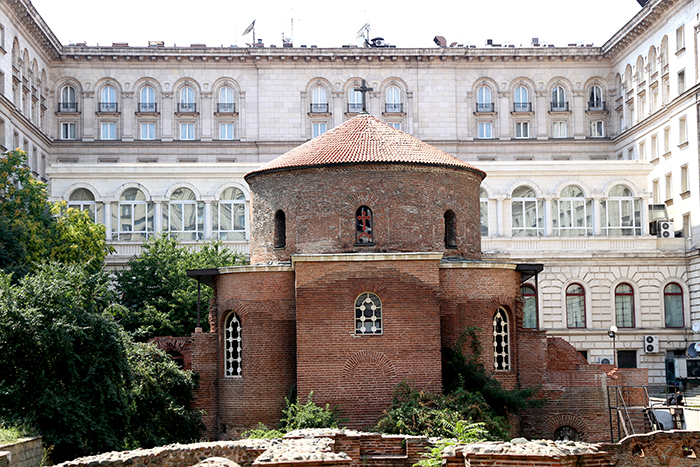 To see what is thought to be the oldest and best-preserved monument in Sofia from the Roman era, you’ll have to visit a courtyard between the Sheraton Hotel and the Presidency, where you’ll find the St. George Church Rotunda. This ancient church stands just a few meters away from the Eastern Gate at the Serdica Metro Station. 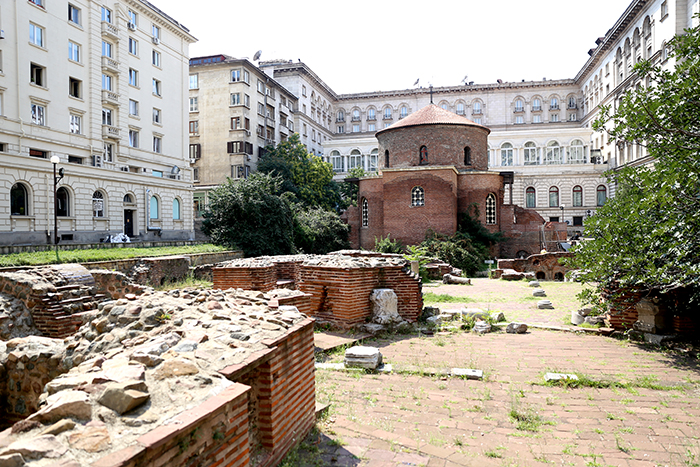 Around the church are fragments of buildings from Ancient Serdica, and for a small entrance fee, tourists can enter this 4th-century church to view the multi-layered frescoes on its walls, the oldest of which dates back to the 10th century. 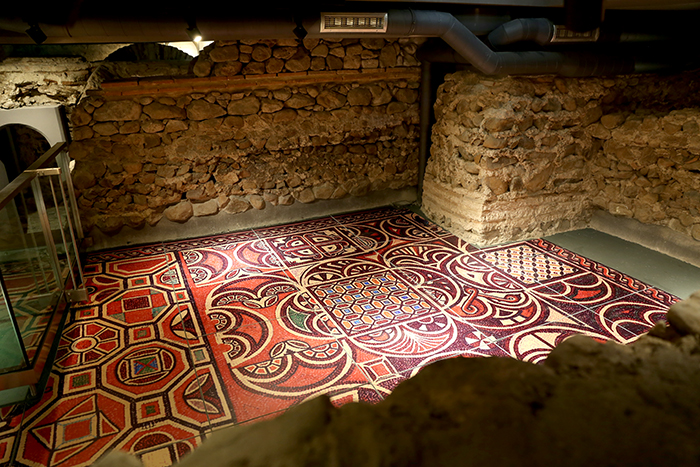 One of the city’s most important landmarks, St. Sofia Church may not look like much on the outside, but it’s what’s inside this late 5th-century basilica that is so monumental. Beneath the church is a preserved Roman necropolis that serves as an underground museum and contains some of the most significant archaeological discoveries ever made in the Balkans. 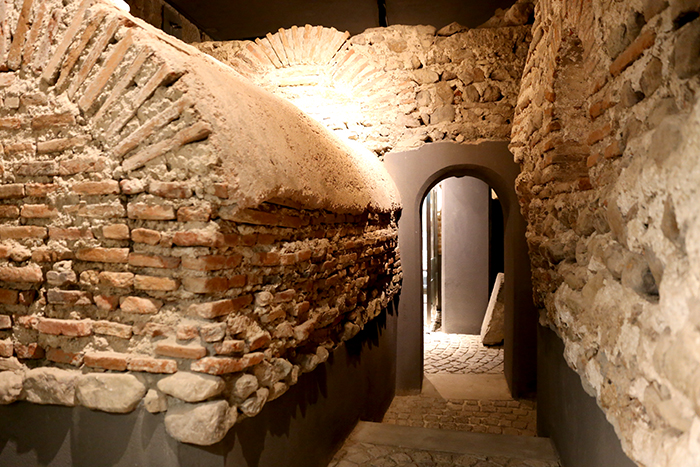 These priceless remnants of the past including mosaics, artifacts dating back to the Roman and Byzantine eras, and the remains of over fifty tombs. The church is so important that the city’s name was changed from Serdica to Sofia because of it, and the church itself appears on the city’s coat of arms. No list of the 10 things to see and do in Sofia is complete without a stop at this church. 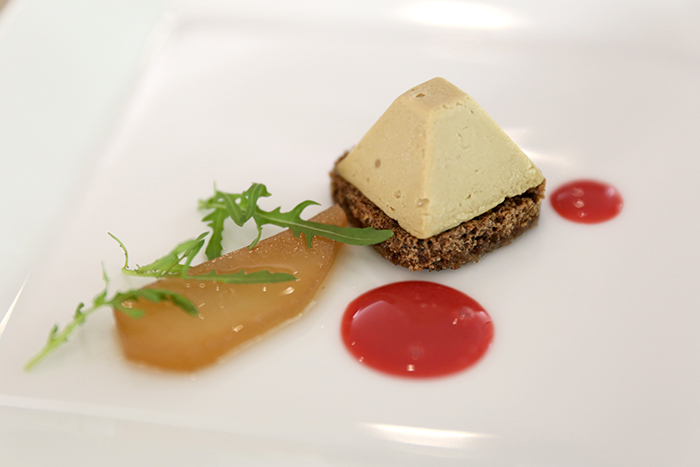 One of the best and most unique places in the city to grab a bite to eat is Talents, a one-of-a-kind fine dining restaurant where the dishes are crafted, prepared, and cooked by some of the world’s best future executive chefs: the third-year students from the local HRC Culinary Academy, who spend an entire year testing their culinary skills at the restaurant before they move on to internships and restaurants all over the world. 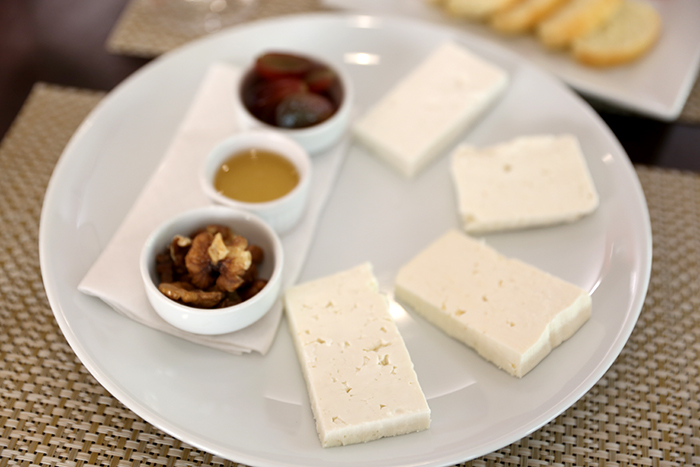 The restaurant creates a nurturing environment for its students by welcoming flair and creativity while still focusing on classic cooking techniques. The Talent Salad, which comes with Serrano ham chips, and their exquisite feta cheese, can’t be beat! 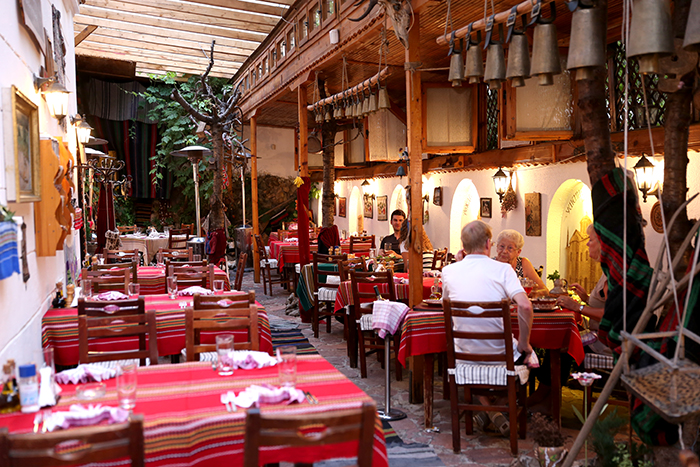 If more traditional Bulgarian cuisine is more up your alley, there is no better place than Manastirska Magernitsa, better known as the Monastery Cook House, which is located in a historical building in the city center. Each of the delectable recipes on this cozy, homey restaurant’s menu comes straight from a different monastery in Bulgaria, ensuring that all of the food that is served here is 100% authentic. 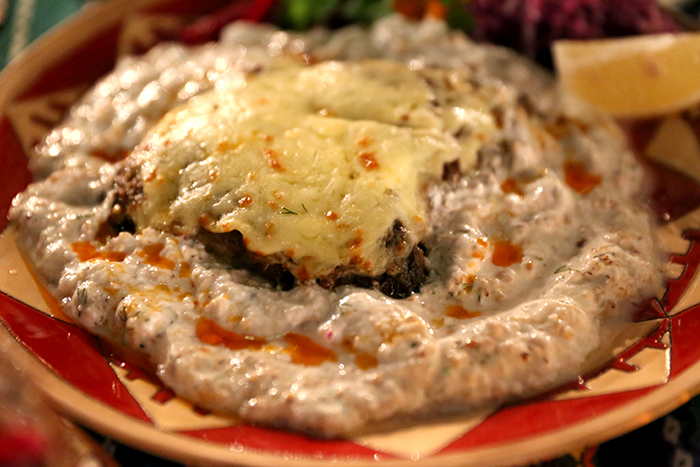 The flavorful fare here is fantastic, and the portions are large and hearty. Enjoying a large glass of the restaurant’s house-brewed “live beer” with your meal takes the dining experience to a whole new level, and makes Manastirska Magernitsa Restaurant a can’t-miss. 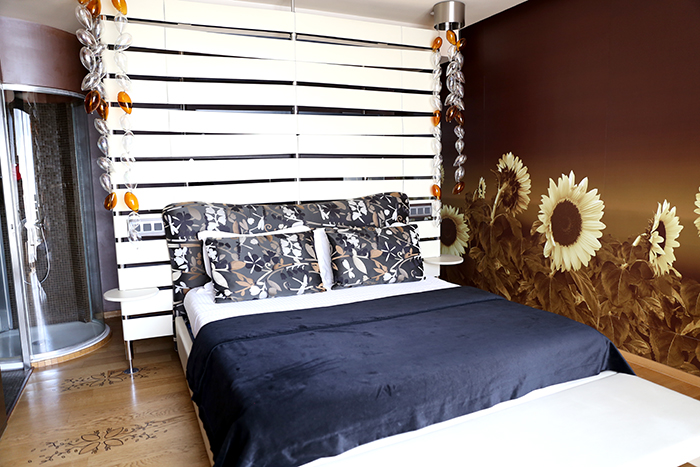 If you’re looking to visit Sofia, but have no idea where to stay, never fear. Some of the city’s best accommodations can be found at Les Fleurs, a boutique hotel located along Vitosha Boulevard in the shopping district. In addition to its stunning and colorful design, this amazing hotel also offers 31 spacious and beautiful rooms filled with modern decor, free WiFi for every guest, a fantastic restaurant and bar, and an outdoor terrace that gives its guests picturesque views of the city and nearby mountains. 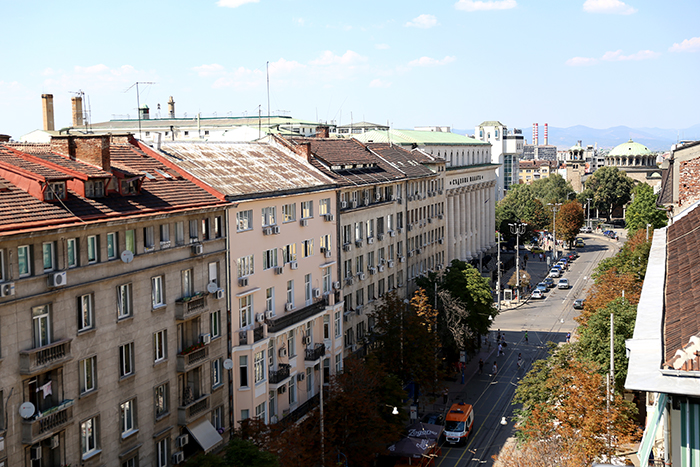 As the hotel is located along Vitosha Boulevard, it is just minutes away from world-class shopping experiences, and its central location will make it easier for you to commute between the hotel and the city’s various attractions. 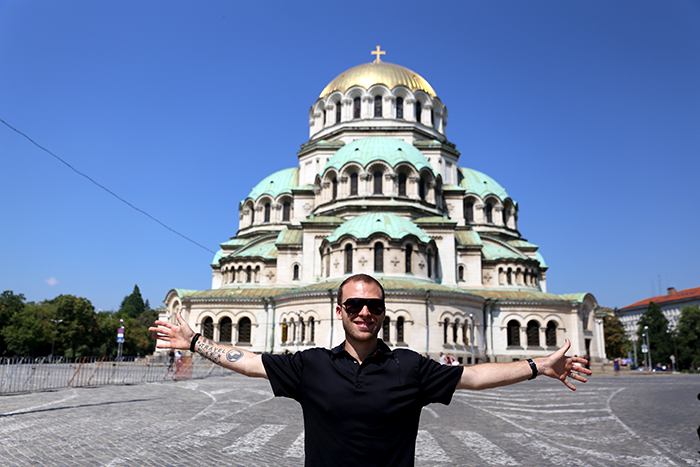 That concludes our list of the 10 things to see and do in Sofia. With a delightful mix of ancient and modern, the Balkan city of Sofia is a must-visit for anyone who wants to travel the world. Whether you choose to indulge in high-end shopping or traditional Bulgarian cuisine, or even be transported back to Roman times in the middle of a Metro Station, Sofia has it all, and its charms are sure to delight all types of travelers!