After arriving in Shillong (the capital of Meghalaya) earlier in the morning, I met up with my friend Paul, a local who is also a part of the Khasi tribe of northeast India. He took me to Iewduh Market (also known as Bara Bazaar), where we had an authentic Meghalaya street food breakfast. I was so hungry and couldn’t wait to eat!

Almost immediately upon arriving outside Iewduh Market, we came across a woman selling a fried, doughy Khasi dish and tea. The tea was minty and reminded me of tea I’d had in Morocco. The dish reminded me of an elephant ear that you can get at fairs across America. It contained jaggery and was a great way to start the morning.

Check out the Top 10 Things to See and Do in Shillong, India

We also saw vendors selling natural loofahs, which are almost like sponges. You can use them to scrub your body clean. 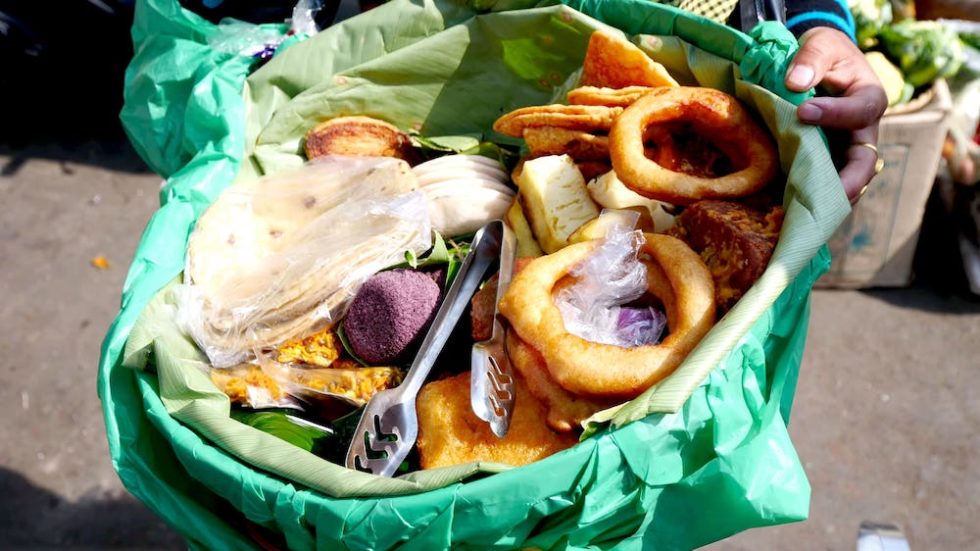 As we approached the entrance to the market, I learned that there are lots of food stalls in the market, which is divided into smaller markets that specialize in vegetables, meats, fish, and more.

This is the oldest market in northeast India, and you can certainly feel it! The people moving around me looked more had a lot of southeast Asian features because they’re descended from the Ahoms, who came from what is now Thailand.

There were also people carrying the carcasses of slaughtered cows and pigs on their shoulders! It was an incredible sight to see! 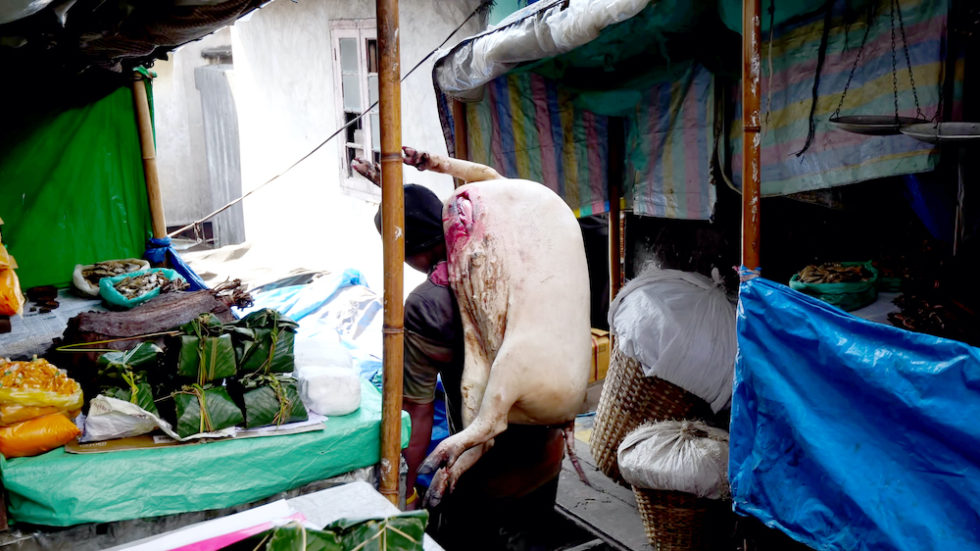 We made our way through the market, taking in all the sights and smells as we went. We picked up a few foods and then moved on to the dry fish market. There were 20 different varieties of dried fish there, including the kind that’s used to make fish chutney. I could smell the salt in the air!

Our first stop for our Meghalaya street food breakfast was Nat Khasi Restaurant, which is next to the fruit market. There are no tables, so you just sit down and eat. 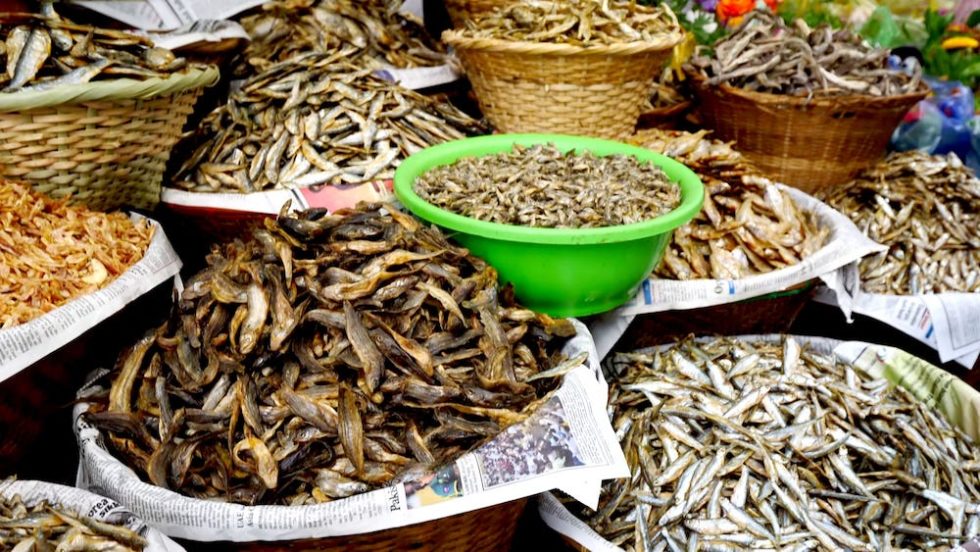 I ordered pork liver, pork intestines, rice mixed with pork (jadoh), regular pork, and a pork salad with onion and ginger called dohklieh. Everything looked delicious. It was so different from what I was used to eating in India, where pork is not common.

Check out the Top 5 Things to See and Do in Cherrapunjee, India

The rice was very flavorful and reminded me of a non-veg biryani. The pork was absolutely delicious and not spicy at all. I also had a Russian salad with pork, which was also so good!

Then I went with the liver, which was tasty and chewy. The pork intestine sausage was also wonderful. Some of the pork had bones in it, so I had to be careful. Then Paul had me try a hot chili and a fermented soybean chutney.

Then we visited the kitchen to see the food being made. There were large pots everywhere!

Then I tried a traditional fruit called sohshang, which can be sweet or sour and is rich in vitamin C. It had the consistency of a tomato and had a big seed in the center but was sour. I liked it, though! 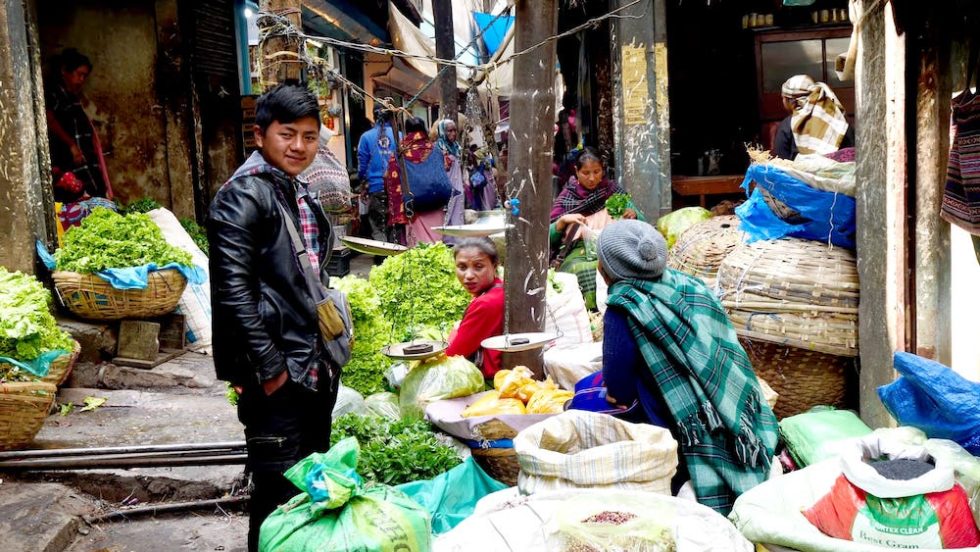 Next, we headed to the beef market. It was very traditional and rustic and felt like I had taken a trip back in time. There was beef as far as the eye could see: pieces laid out on tables and even more cow parts like tongue and other cuts of meat hanging from the booths. I watched a guy butcher a carcass right in front of me. It was a real spectacle!

It was similar in the pork market. This is so unique to this part of India. It’s one of the rawest experiences I’ve ever had in my travels! 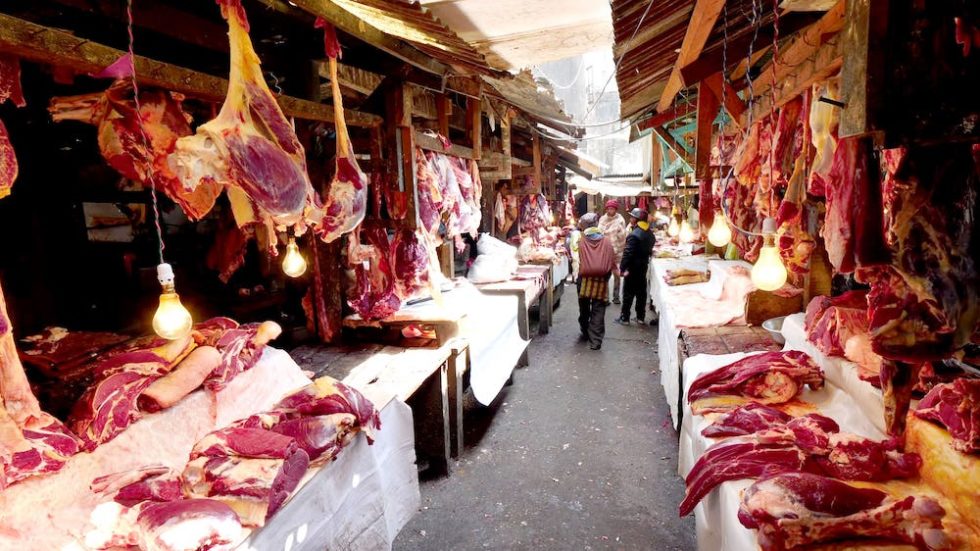 Then we headed to the fresh fish market, where they sold lots of local river fish. There were about 30 or 40 vendors in total there, and many of them were selling the same type of fish. Everything there is incredibly fresh.

Check out the Top 5 Things to See and Do in Dawki, India

Then we went to the chicken and duck market. There were so many chickens everywhere and there were even pigeons! I then learned that Iewduh Market is run by a king and every vendor pays taxes to him. 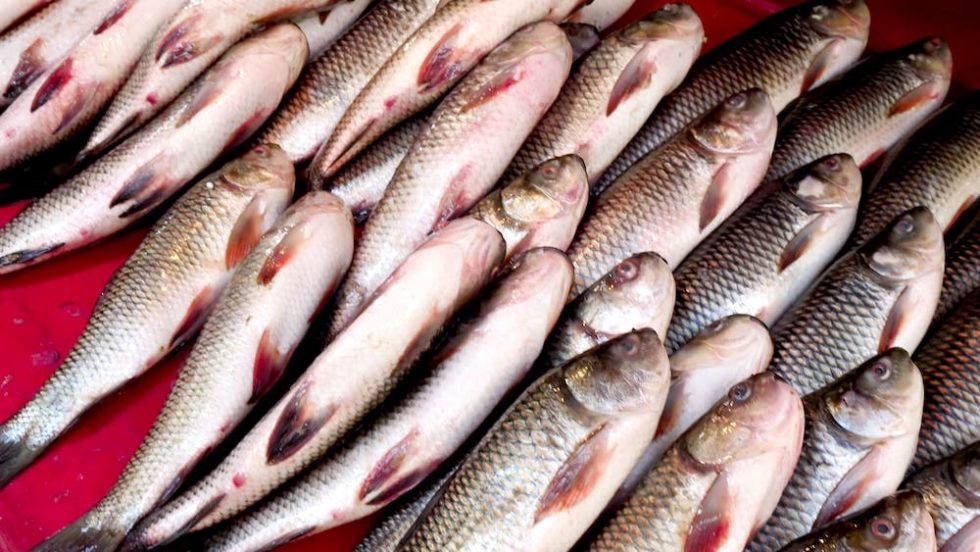 From there, we continued our Meghalaya street food breakfast tour in a tiny café to eat the snacks we bought earlier. We got some red tea there, and then dug into a rice cake. It had coconut on it and was very dry.

Then, I tried another rice cake with jaggery. It was great with the minty tea! There was also a dense snack made of super sticky rice. It was a little too sticky for me! 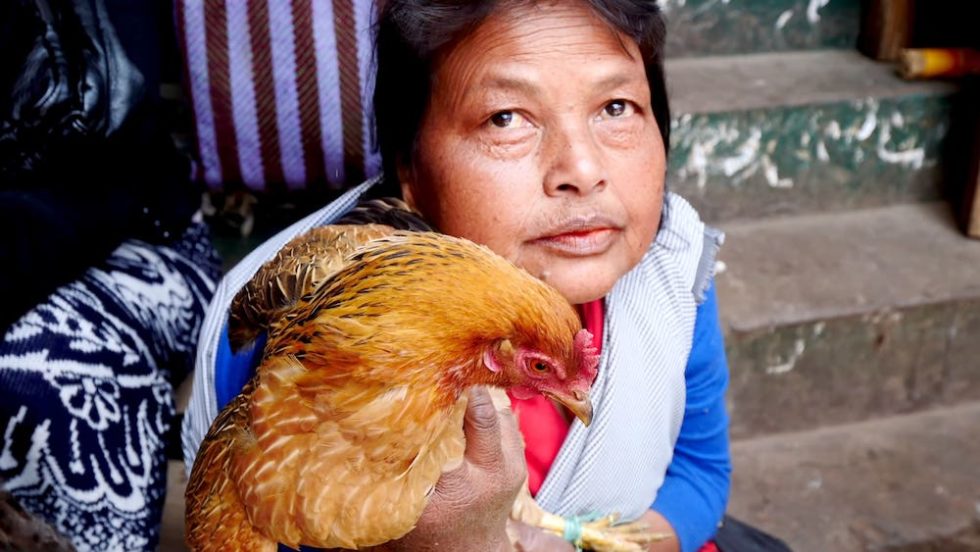 I hope you enjoyed my Meghalaya breakfast street food tour of Iewduh Market! What an incredible experience this was. If you liked it, please give the video a thumbs up and leave me a comment. Also please subscribe to my YouTube channel so you don’t miss any of my upcoming travel/food content!