Arguably one of the fascinating places in the world among travelers is the famed Korean Demilitarized Zone or DMZ. I was lucky enough to visit this mysterious area during my Korean DMZ spy tour in May of 2019. The tour began in the capital city of Seoul and took us to the northern reaches of South Korea, including an on-site military base. 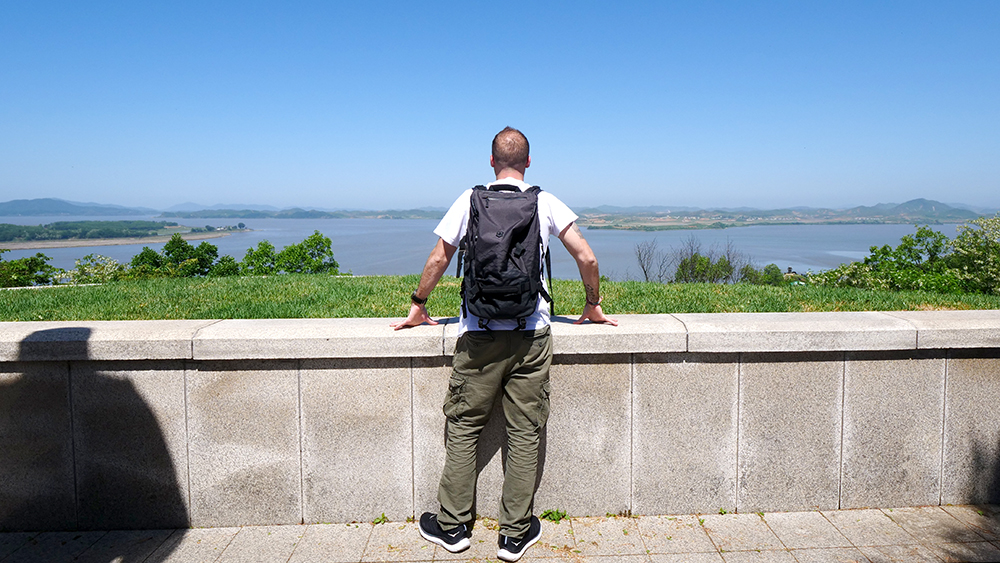 Our visit was arranged by the Korean Tourist Organization, or KTO, who enlisted several travel bloggers, myself included, to document and promote the sites and culture of South Korea. It was a wild and informative experience that I will never forget.

What is the DMZ? 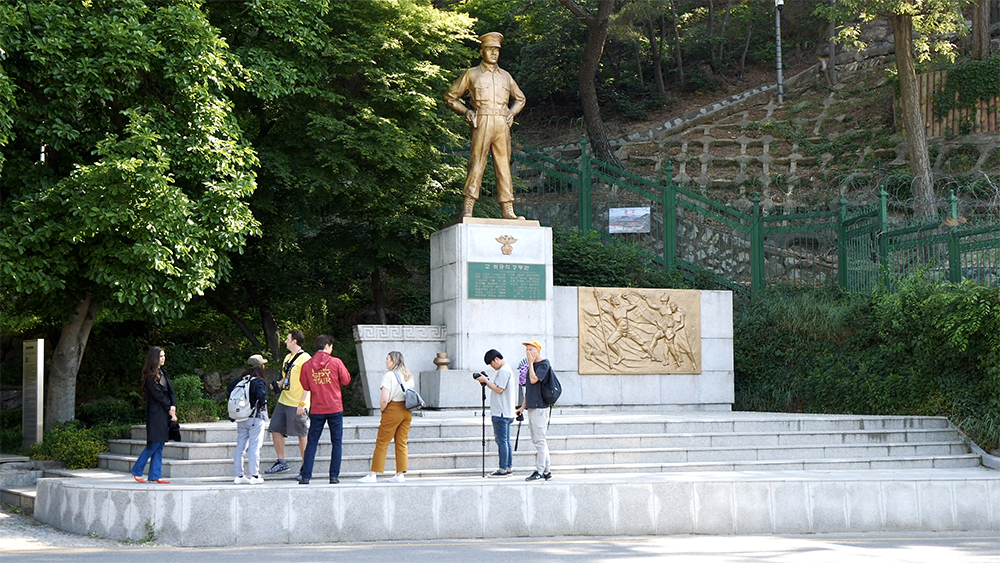 The enigmatic DMZ is a strip of land that is roughly 160 miles long and 2.5 miles wide. It runs along the border between North and South Korea and came into being in 1953 as a result of the Korean Armistice Agreement. This agreement brought about the end of the inflamed hostilities between the two during the Korean War. The DMZ has served as a buffer zone between North and South Korea ever since. 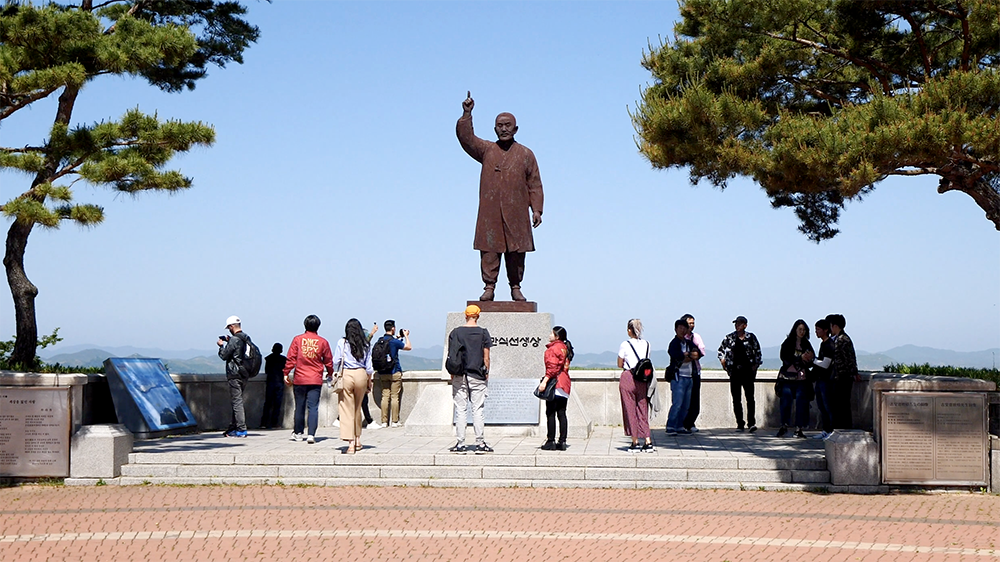 The zone itself is not open to the public. Within the zone is the famed Joint Security Area, which is the only part of the DMZ where forces from North and South Korea stand face-to-face. There, diplomatic engagements between the two countries take place. Military negotiations between North Korea and the United Nations Command also took place there until March of 1991. 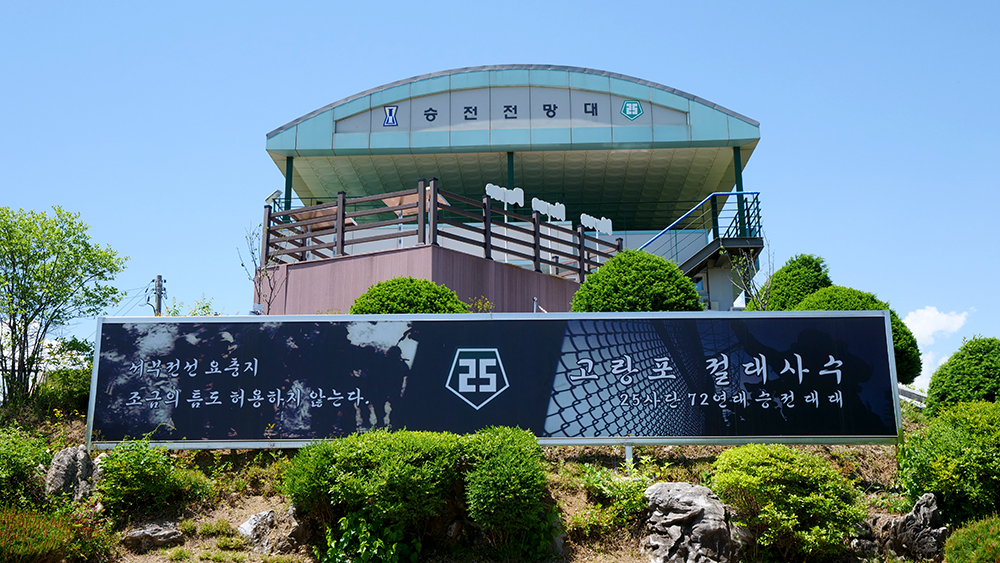 The South Korean side of the DMZ can be reached via a one-hour drive from the capital of Seoul to the city of Paju. There, you can actually get a glimpse of the most secretive nation in the world, North Korea. But viewing North Korea is just one of many fascinating things you’ll be able to do during your Korean DMZ spy tour. This is my Korean DMZ spy tour experience. 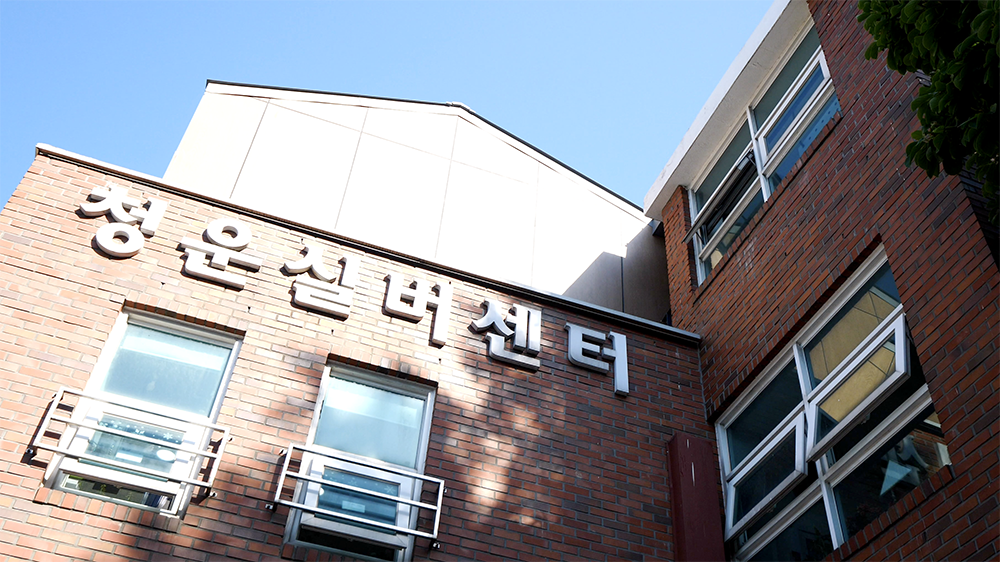 Back in 1968, thirty-one North Korean spies crossed over into South Korea with the intention of killing the South Korean president. Their infiltration of the country resulted in a massive shootout in Seoul, during which 29 of the spies were killed. Two of the spies survived. One escaped back to North Korea, while the other, Kim Shin-jo, was captured by South Korea. He snitched on his own country and became a pastor and a TV star! 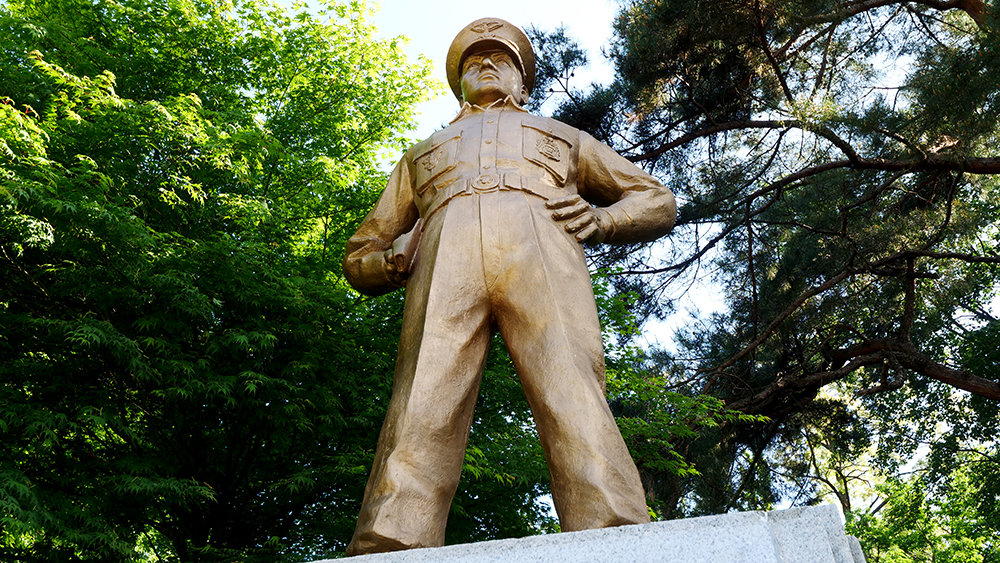 My Korean DMZ spy tour began at the site of the incident, where we learned all about the series of events that led to the shootout. We followed that with a visit to a memorial to the local chief of police who was on duty during the assassination attempt on the South Korean president’s life. He lost his life protecting the president and is considered a national hero. 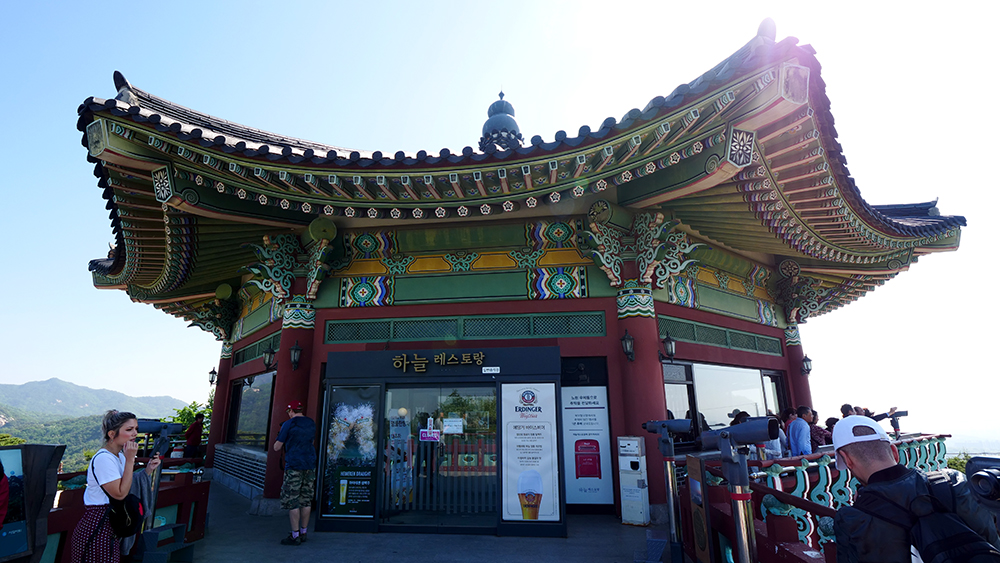 The third stop on our Korean DMZ spy tour was an octagonal pavilion and observation deck called Bugak Palgakjeong. The deck offers spectacular views of Seoul and the nearby Bugaksan Mountain. Because it’s one of the highest points in the city, the temperature there is remarkably cooler than other spots around Seoul. 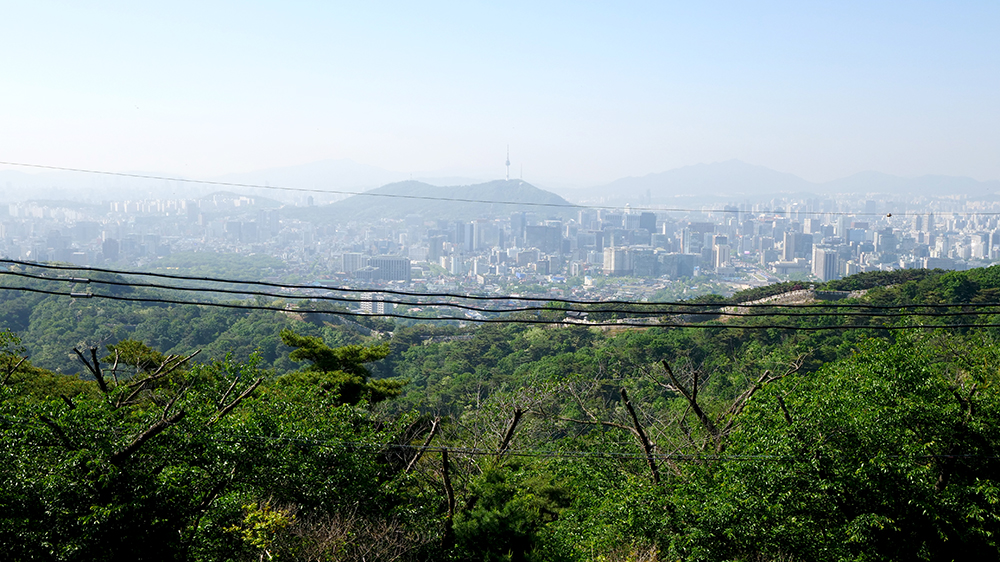 From certain vantage points, Seoul almost looks small. Only once you fully explore the pavilion do you see how expansive the city truly is. On the outskirts of the city are mountains covered in lush greenery. The views are really beautiful and make Bugak Palgakjeong a great stop on any Korean DMZ spy tour. 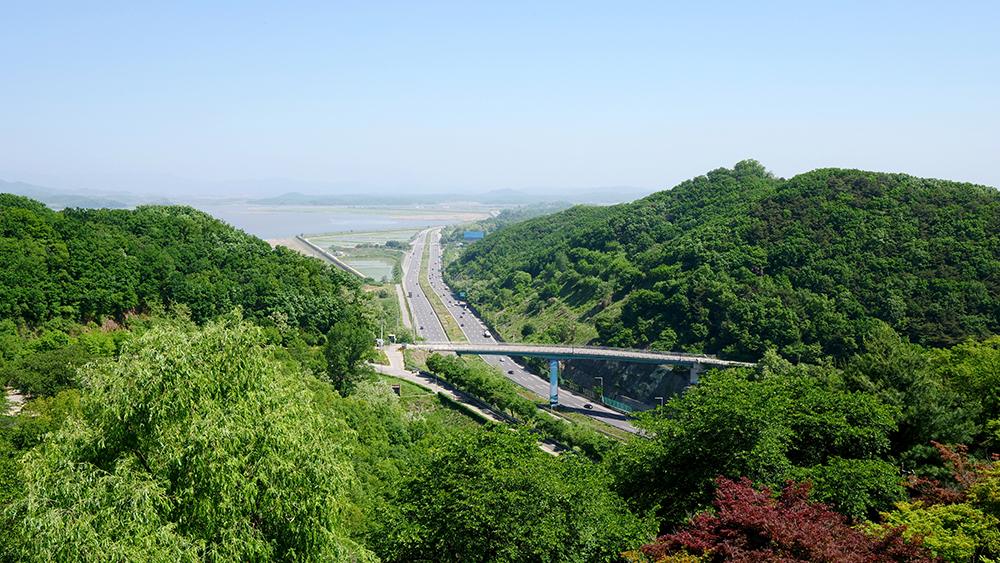 After a one-hour drive from Seoul, my Korean DMZ spy tour continued in a lush, green area of Paju. Just two-and-a-half kilometers away, lying in plain sight and separated from us by the Im Jin River, was North Korea. 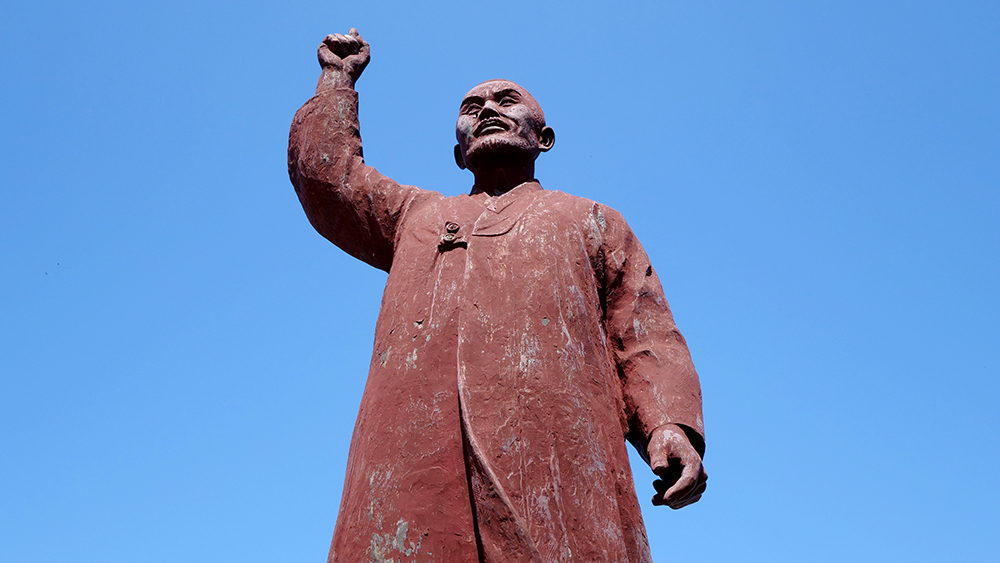 It was mind-blowing that we were standing just meters from the most heavily-guarded international border in the world. The most surprising thing about it was how unassuming the area looked. It looked like a normal river that you could easily swim or boat across and didn’t look heavily guarded. 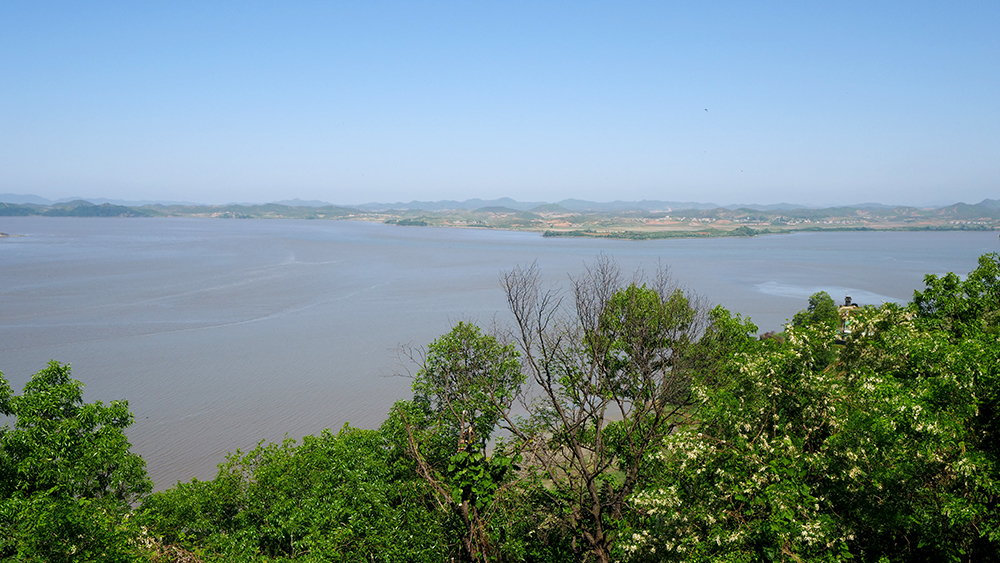 The main difference I noticed between both sides of the river is that, while the South Korean side was lush and teeming with trees and plant life, the North Korean side looked barren. All of the trees had been cut down and the land was completely flat. 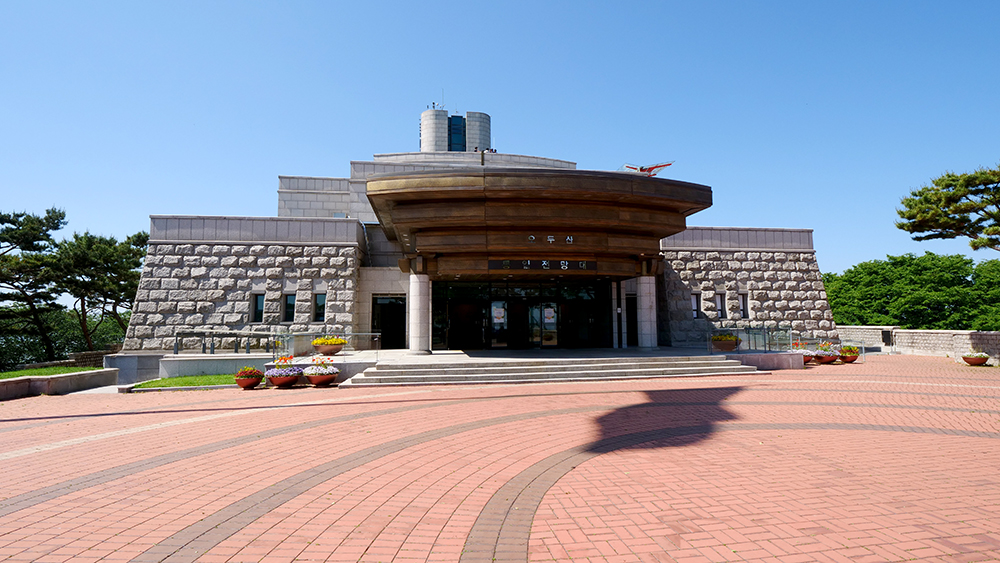 Standing near the river is a sort of visitor center that contains exhibits and an observation deck. No Korean DMZ spy tour is complete without learning more about the area and its history via the exhibits on display. One of them showcases a bullet train that many hope will someday become operational. This train would begin service following the unification of North and South Korea, and would travel between the Korean peninsula and Paris, France! 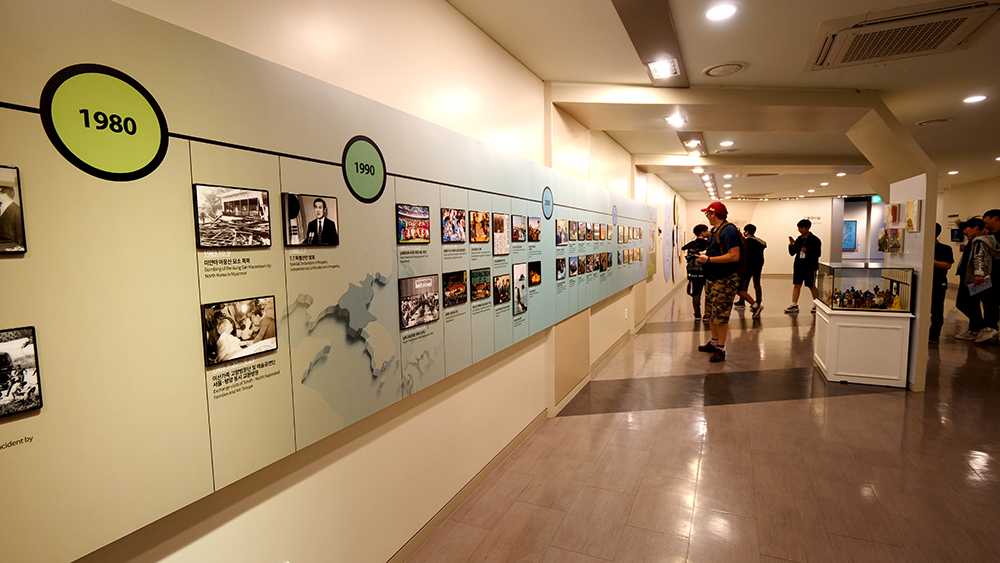 Other exhibits include a wall of photos that document all of the significant events that have occurred between the two countries since the peninsula was split in two. The exhibit allows you to follow the ups and downs of the strained relationship between the two. 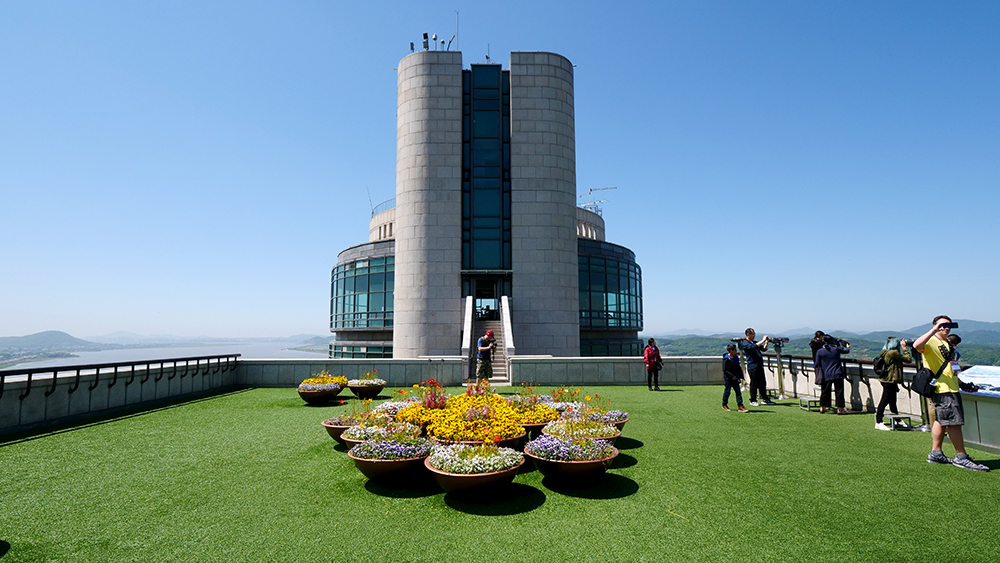 On the center’s third level is an indoor observation deck with huge windows. There is a second observation deck on the outdoor fourth level. There, you can get much better views of North Korea on the other side of the river, especially if you use the large, stationary binoculars pointed toward the secretive nation. It looked like a lot of empty land and a handful of houses to me. 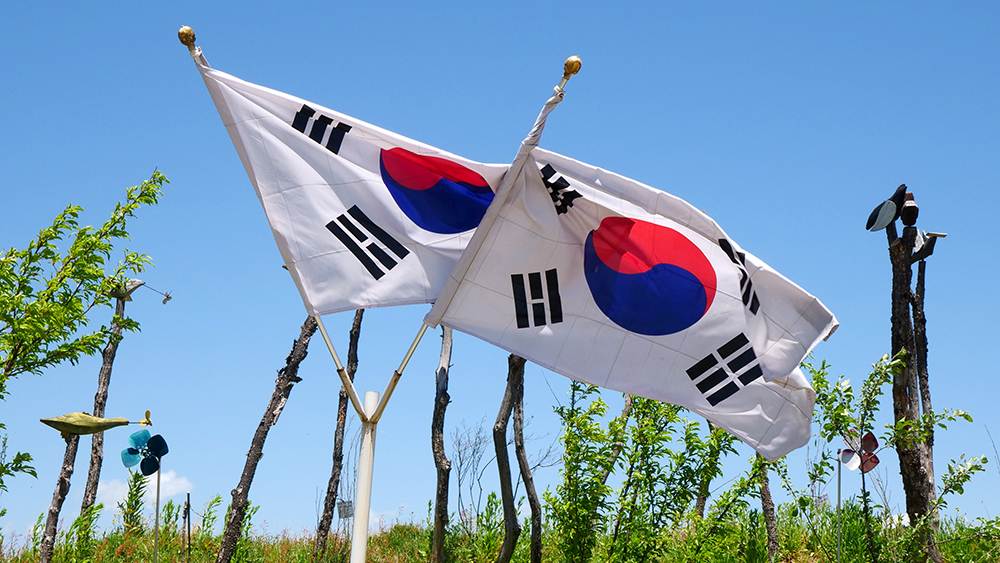 My Korean DMZ spy tour continued with a visit to a military base in the area. On our way, we rode past the second defense line, where we passed by lots of tanks that cost $5 million each! As we got close to the base, my fellow bloggers and I had to get our passports ready and put away our cameras. 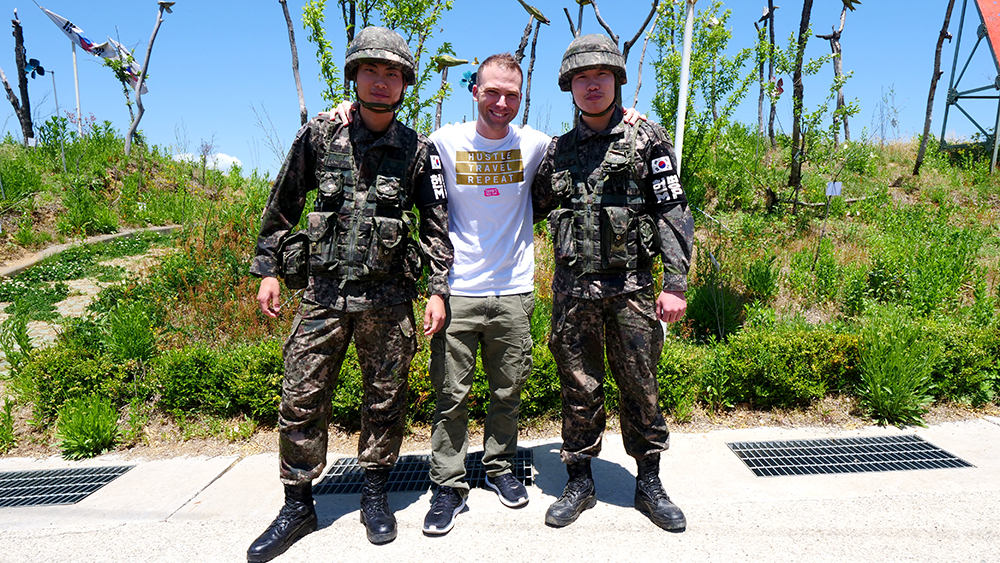 We passed through a heavily fortified area with lots of land mines and fences. We had to hand over our passports, and then a soldier boarded our vehicle. He accompanied us to a point where cameras are allowed. There were many spots there where cameras weren’t allowed, but I was able to get a cool photo with two of the soldiers! 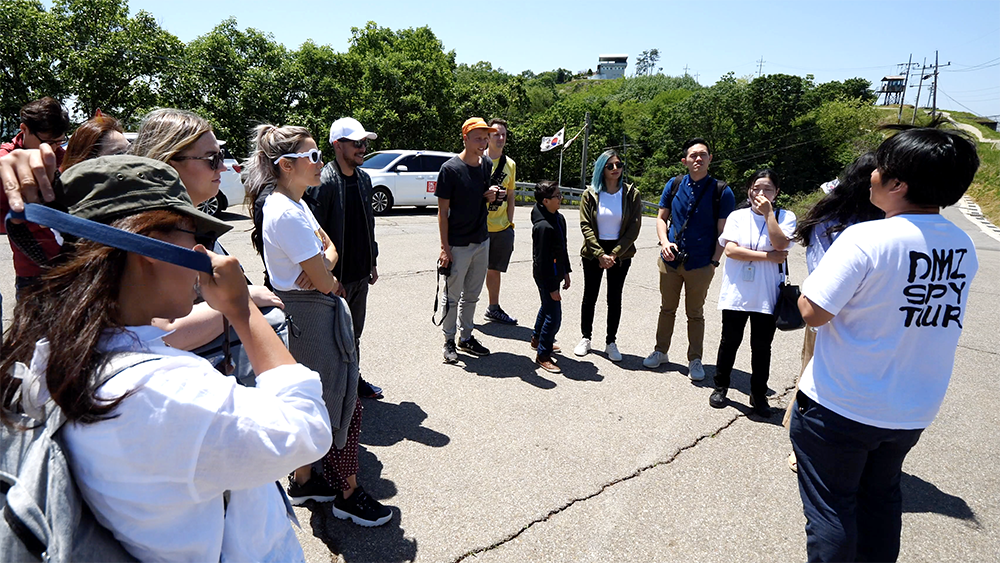 We visited a tiny bunker that looks out at the DMZ. We weren’t allowed to film or take photos out the bunker’s windows for obvious reasons, but I was able to take a look. From there, our Korean DMZ spy tour continued along the zone’s southern border. We passed by a nice area that was almost like a nature reserve, as well as some guard posts on our way to a second observation deck. This deck contained a map that shows the border and all the guard posts along it. 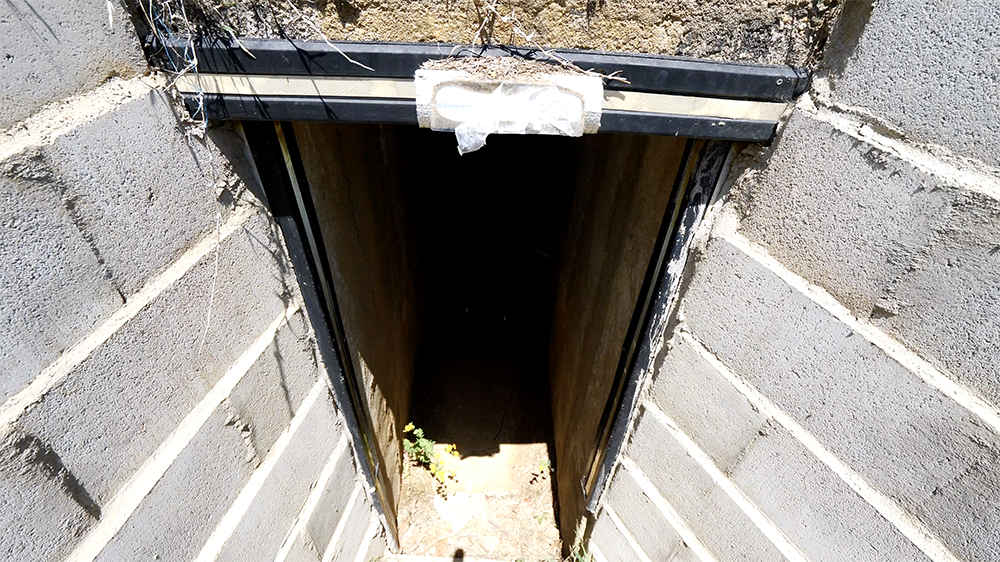 After that, we were each given a certificate of completion that acknowledged that we had officially visited the North Korea/South Korea border! It was a very cool souvenir from my Korean DMZ spy tour!

Check out the 5 Things You Must Do in Daegu, South Korea 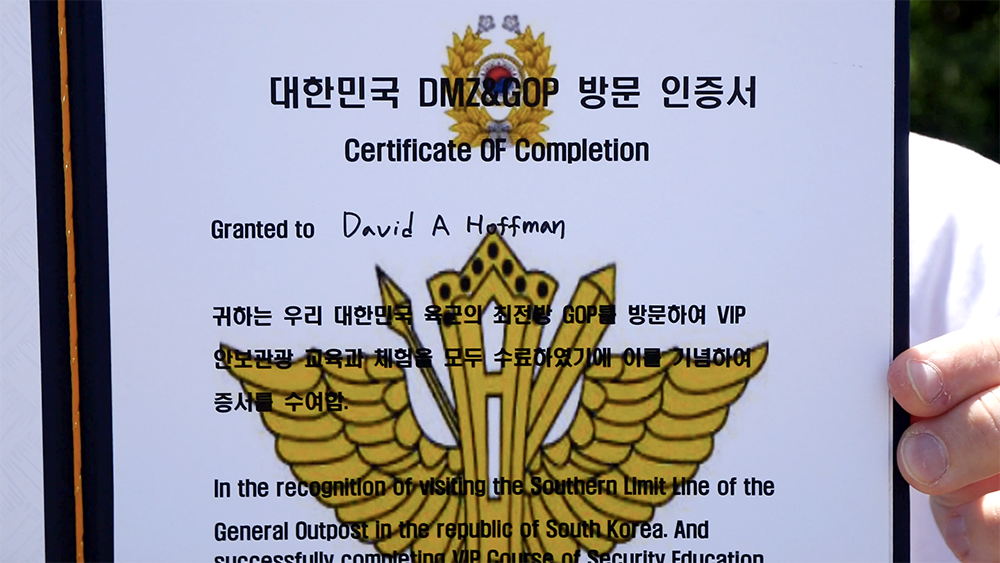 After receiving our certificates of completion, we made our way to the DMZ Experience Zone, where you can try on some South Korean army uniforms and hats. You can also play with some plastic toy guns. It’s a cool spot to have some fun and goof off in an otherwise very serious and regimented location. 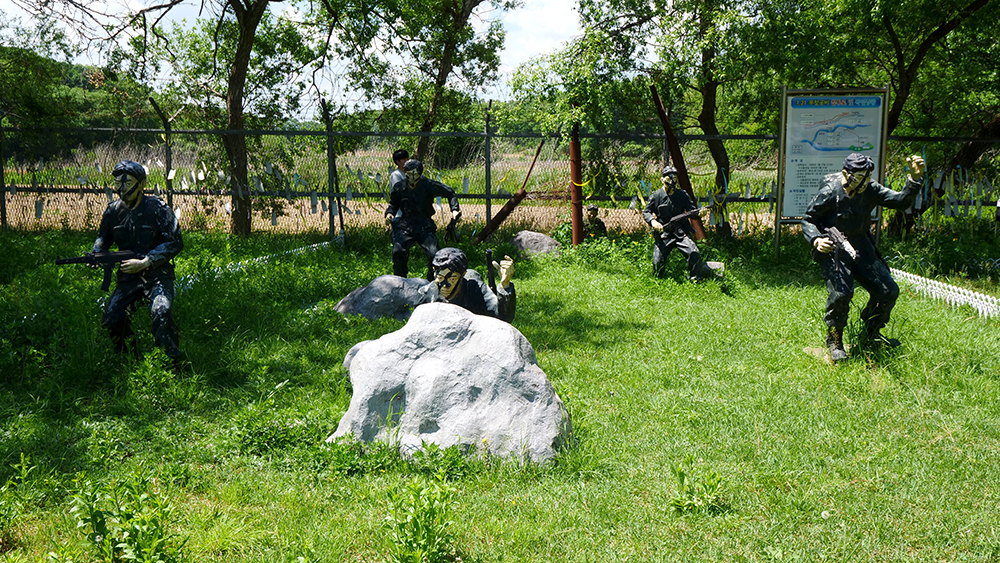 The spies who were associated with the Kim Sin-jo Incident have been immortalized in a way near the DMZ. Near the end of my Korean DMZ spy tour, we arrived at a fence, where there are statues of likenesses of the spies. The statues show that the spies were camouflaged as South Korean soldiers. It even depicts how the spies cut their way through a fence to cross into the country. 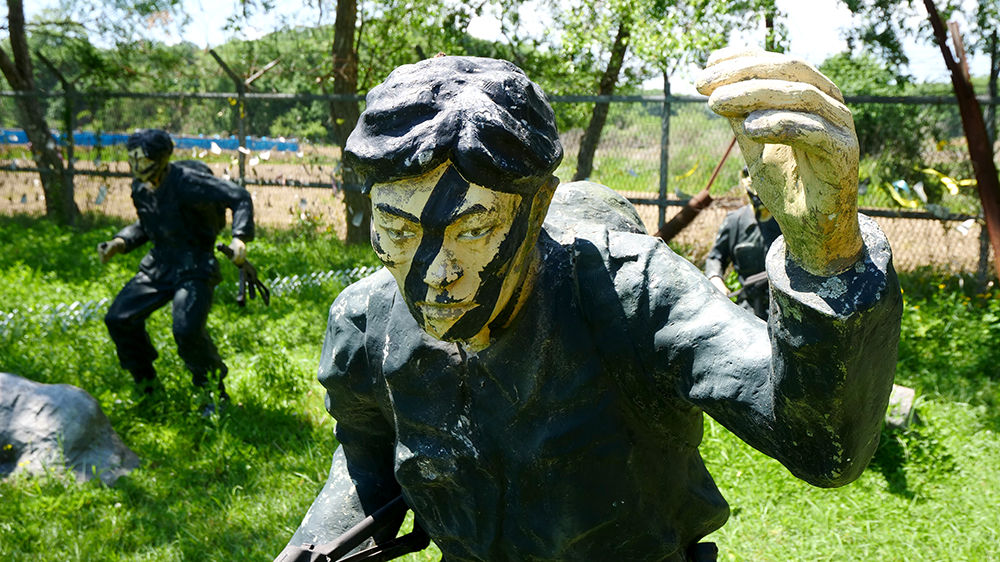 Check out my Korean Temple Stay at Beomeosa Temple: Everything You Need to Know guide

I’m a firm believer that you can’t truly understand a country or its people without taking a deep dive into its history. That’s how you learn how the people got to where they are today. I walked away from my Korean DMZ spy tour with a greater understanding of the struggles that have occurred between these two nations, and how far the two still have to go. And I had some fun along the way. Book a trip to Seoul today to have your own Korean DMZ spy tour experience! 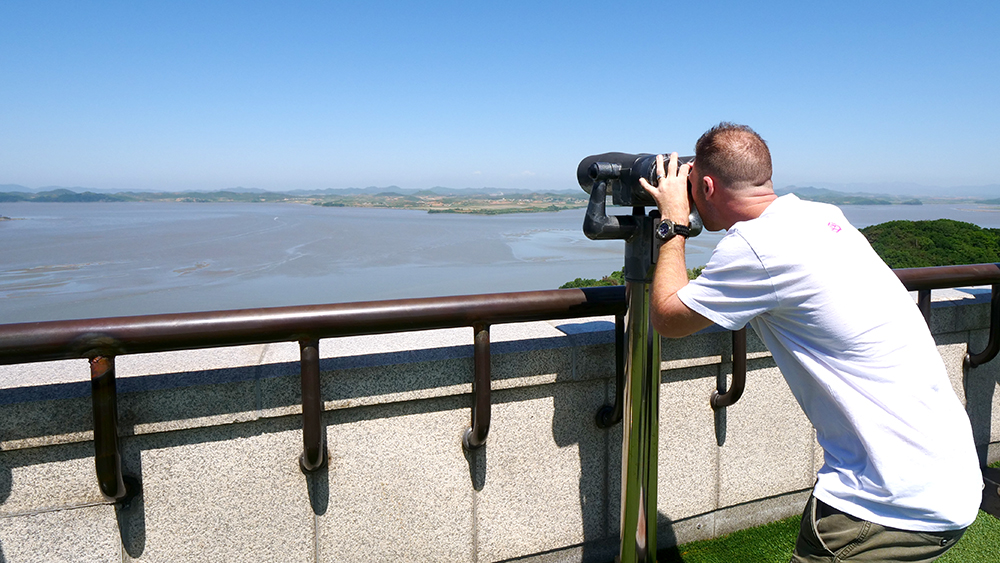