Gyeongju, Korea’s ancient capital, is located just 47 miles north of the bustling metropolis of Busan. But despite its proximity to South Korea’s second-largest city, Gyeongju feels like it’s located in a completely different world. Gyeongju trades the hyper-futurism and modernity of Busan for a much more traditional look and feel. You won’t find many neon lights here. Instead, you’re far more likely to discover ancient secrets about Korea’s distant past. 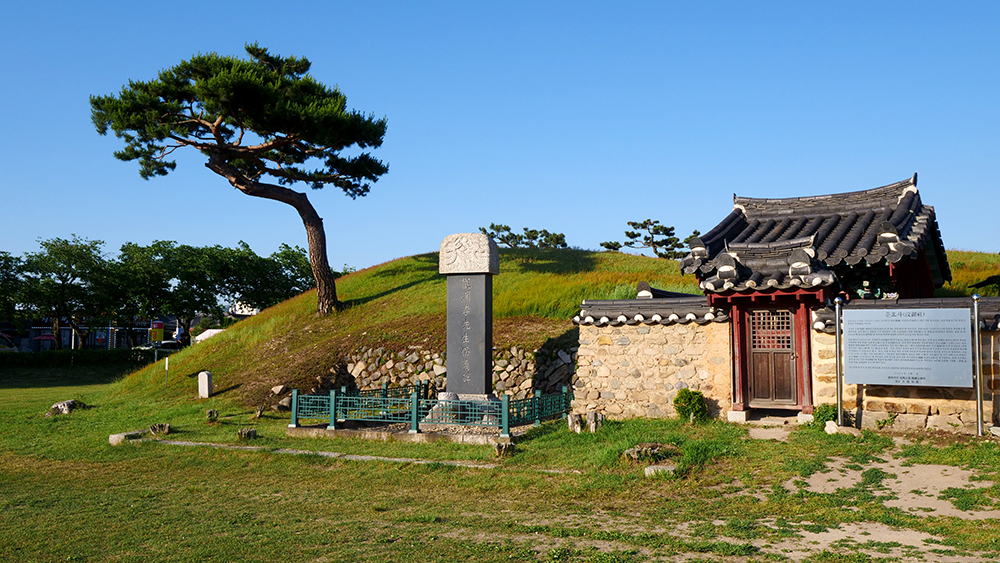 This mid-sized city of less than 250,000 served as the capital of the Silla Kingdom for nearly 1,000 years between 57 BC and 935 AD. Many Silla-era structures remain, including an impressive collection of royal tombs that have been preserved for the world to see. Gyeongju is also the best place on the Korean peninsula to see architecture from the Joseon Dynasty, which thrived from 1388 to 1910. 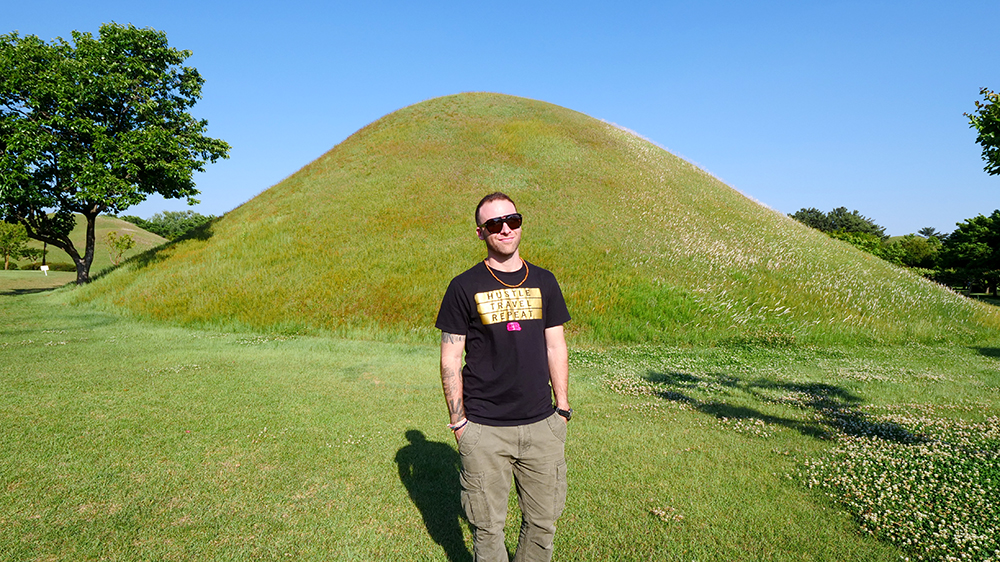 Seoul and Busan are where you go to experience Korea’s unique, world-class culture, but Gyeongju is where you go to dive into its history. It’s heaven for any history buff. Remnants of its rich past are scattered throughout the city’s center and suburbs. These sites, which make up a UNESCO World Heritage Site called the Gyeongju Historic Area, are divided into five belts. Located within these belts are ancient temples, palaces, pagodas, fortresses, pavilions, rock carvings, and more! 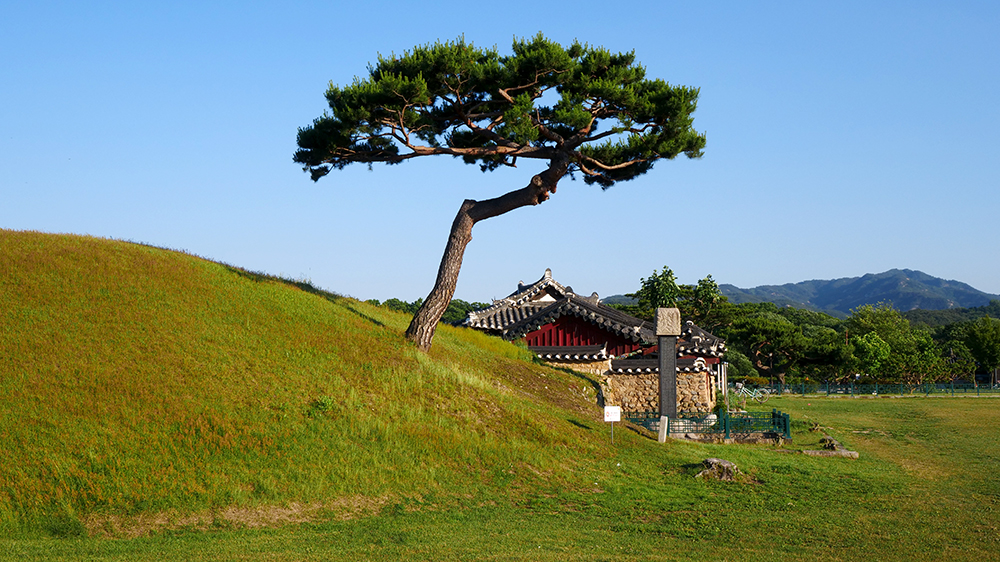 It’s no wonder Gyeongju is sometimes referred to as “the museum without walls.” This is my travel guide to Gyeongju, Korea’s ancient capital.

The Ancient Tombs of Gyeongju 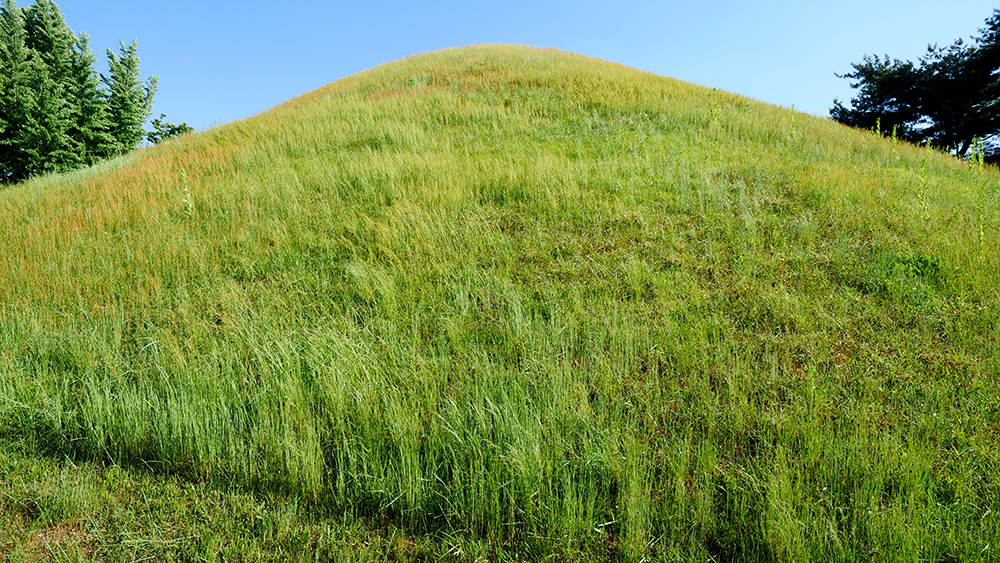 Likely the highlight of any day trip to Gyeongju will be your visit to Tumuli Park. At first glance, this grassy area might seem like a hilly but unremarkable location in Gyeongju. You might be surprised to learn that those hills aren’t hills at all. They’re tumuli, or mounds, that were created to protect tombs that are buried beneath them. In total, this area of the park, known as the Daereungwon Tomb Complex, boasts over 150 tombs from the Kingdom of Silla! 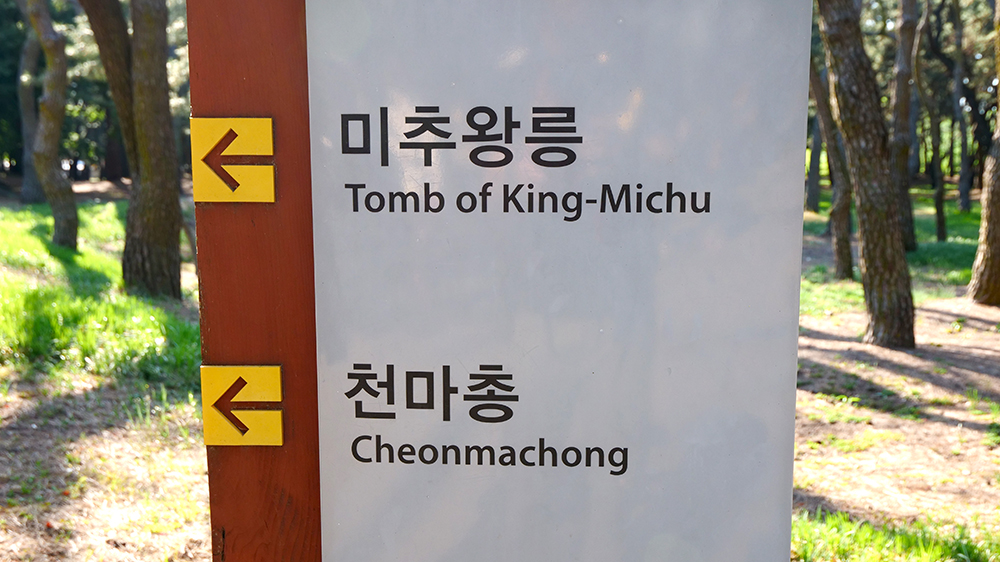 Of the more than 150 tombs in the complex, only 57 of the occupants have been properly identified. Twenty-three of the tombs contain Silla Kingdom royals and nobles, including those of a king and queen. The queen’s tomb, Hwangnamdaechong, contains lots of exorbitant accessories but was unavailable to enter when I visited. Instead, I visited the king’s tomb, Cheonmachong. 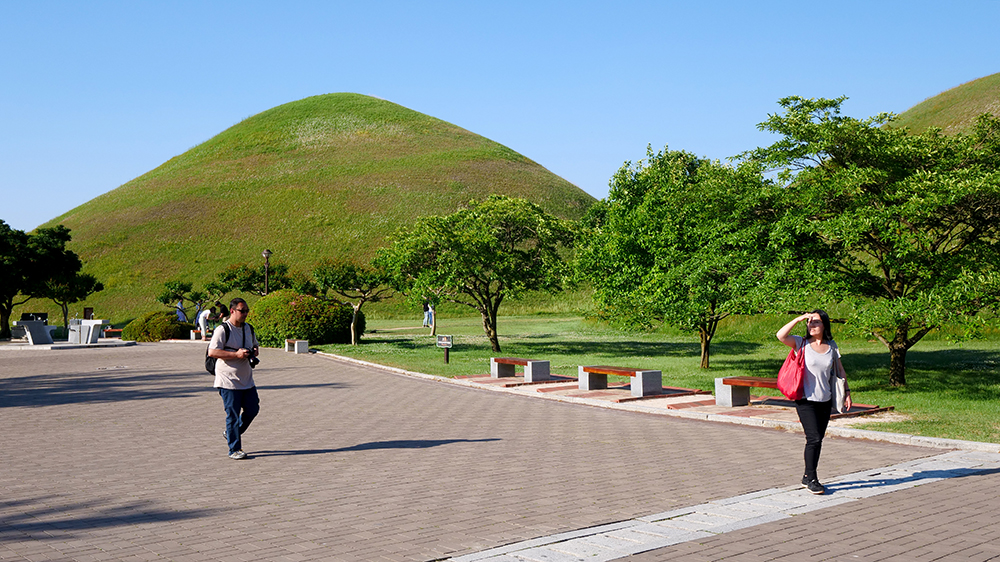 As a history lover, I couldn’t help but roam around Cheonmachong with stars in my eyes. The tomb contains the worn remains of the king’s coffin, lots of gold and silver pieces, bits of pottery, and stunning jewelry. Inside, you’ll also find the only painting ever discovered from the Silla Kingdom and two magnificent crowns, one of which is a replica. 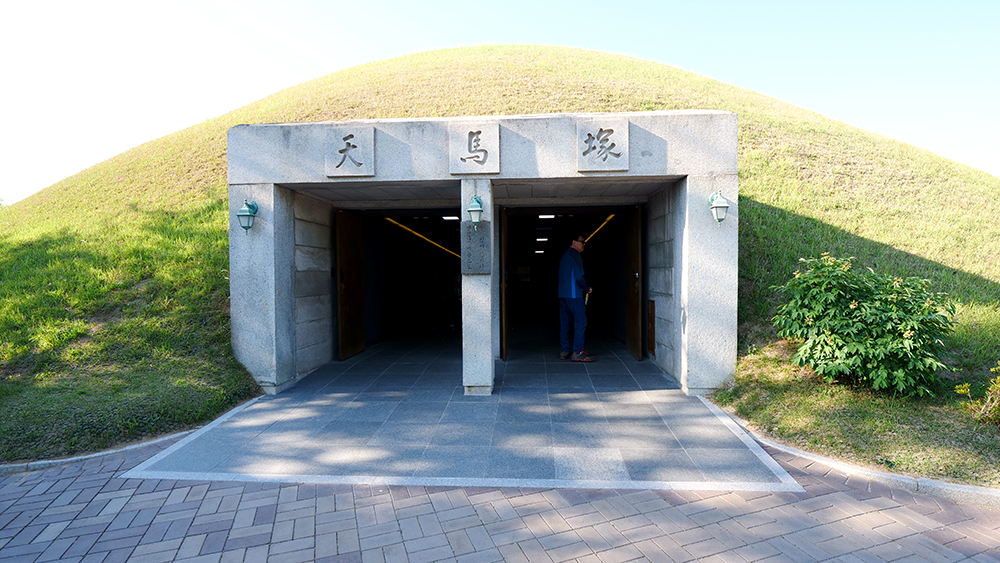 Cheonmachong is a glorious example of the king’s wealth, power, and opulent lifestyle. Visiting his tomb gives you a feel for how the ancient royals lived centuries ago and is a must when visiting Gyeongju, Korea’s ancient capital. 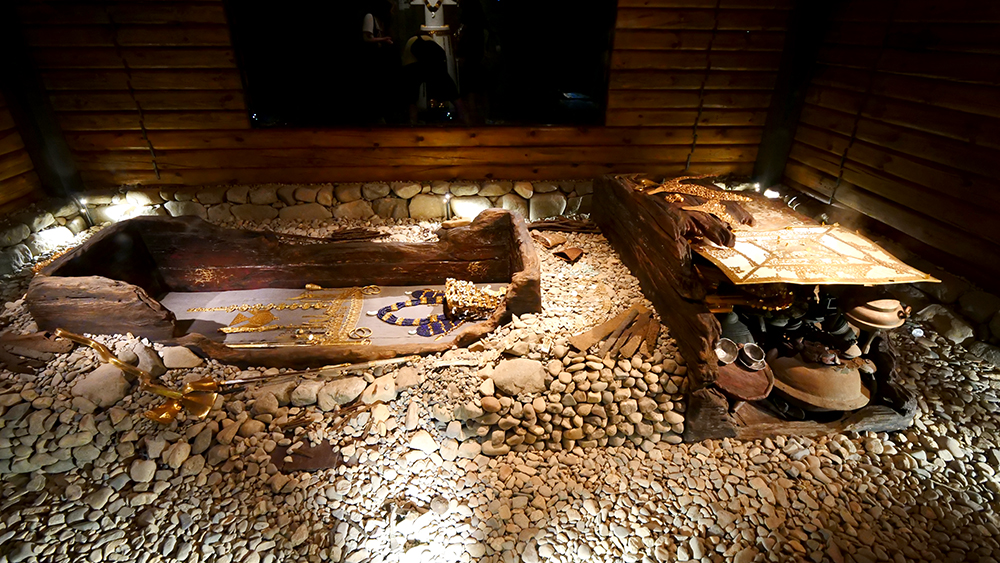 Check out the 10 Korean Food Experiences You Must Have in Busan, South Korea 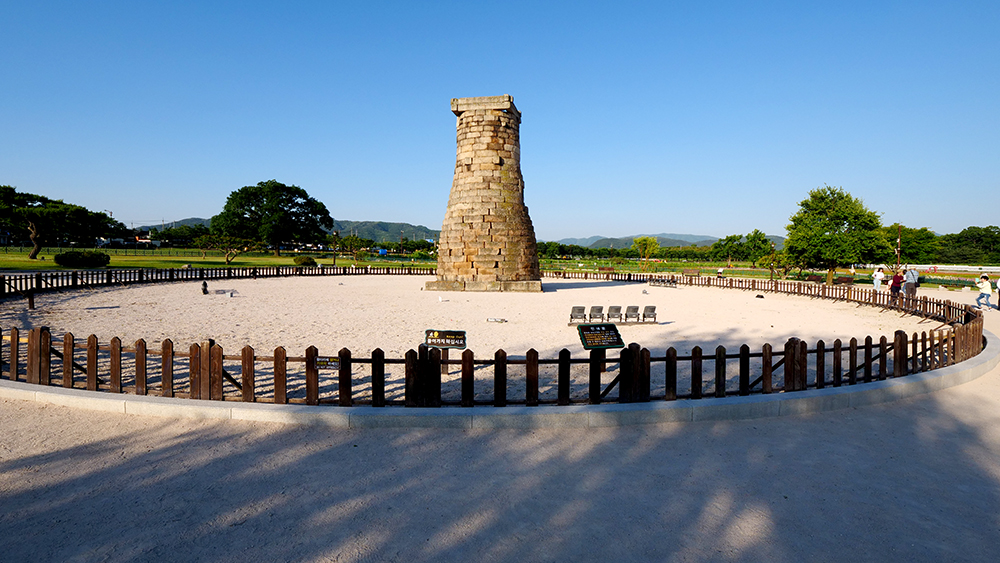 Not far from Daereungwon Tomb Complex is a curious-looking stone tower that stands roughly thirty feet high. This is Cheomseongdae Observatory, which was built during Queen Seondeok’s reign in the year 647. 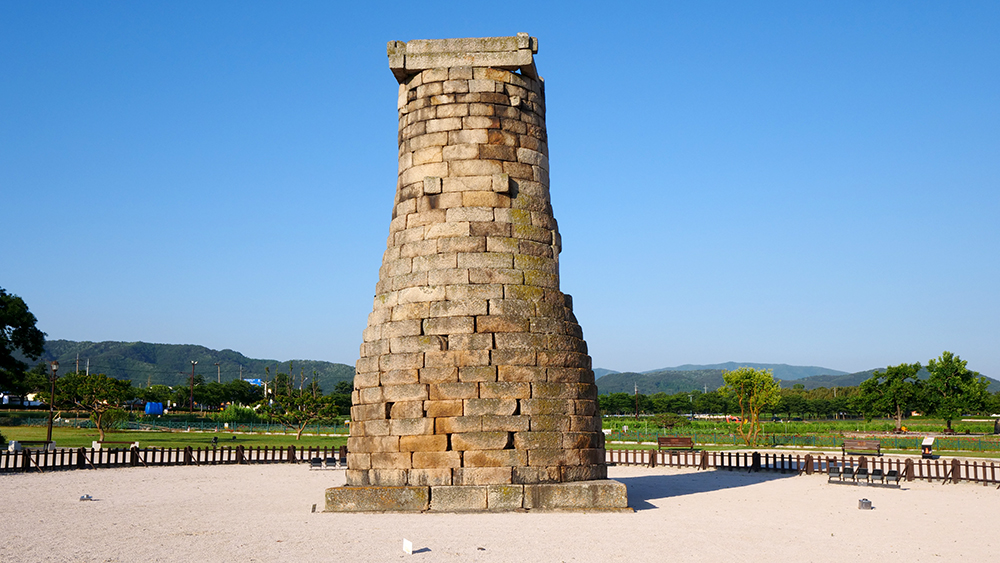 The name “Cheomseongdae” translates to “star-gazing tower.” Cheomseongdae Observatory has several connections to the heavens, as it was used to observe the night sky and is comprised of 362 granite stones symbolizing the 362 days of the lunar year. It’s the oldest-surviving astronomical tower in all of Asia! 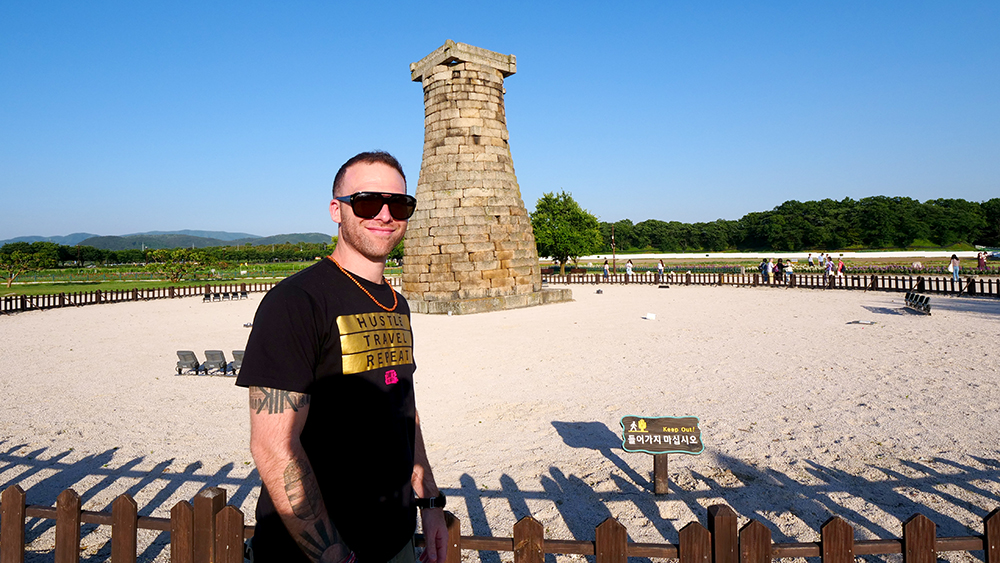 During my time there, I also learned that Cheomseongdae Observatory was the tallest structure in the area at the time, despite its diminutive size by today’s standards. In addition to observing the heavens, it served as a watchtower to keep a lookout for invaders. No trip to Gyeongju, Korea’s ancient capital, is complete without marveling at this ancient tower! 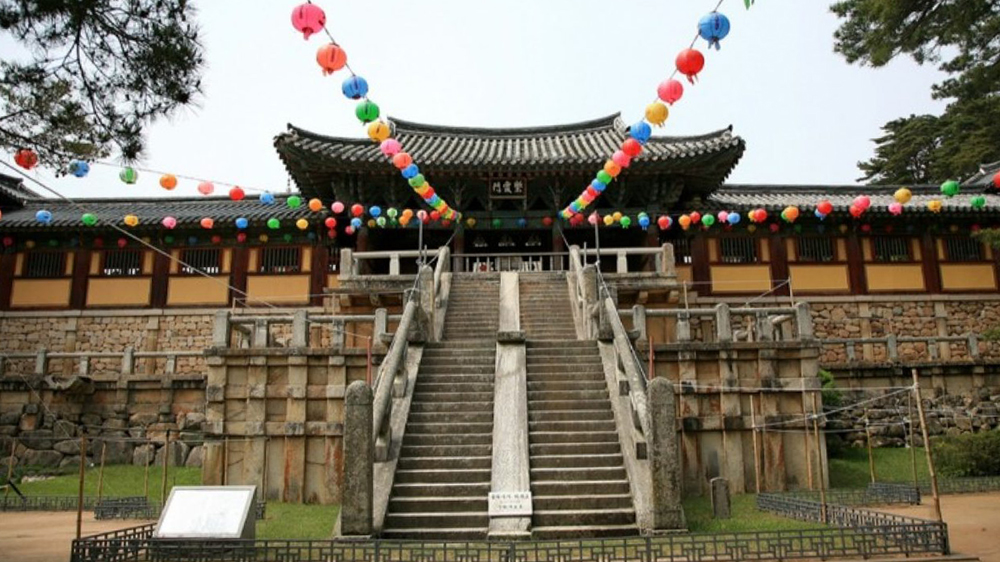 In the Wolseong Belt of the Gyeongju Historic Area are several noteworthy sites, including Donggung Palace. Donggung Palace is all that remains of the Silla Kingdom’s once-mighty palace complex, which burned to the ground in the year 935. 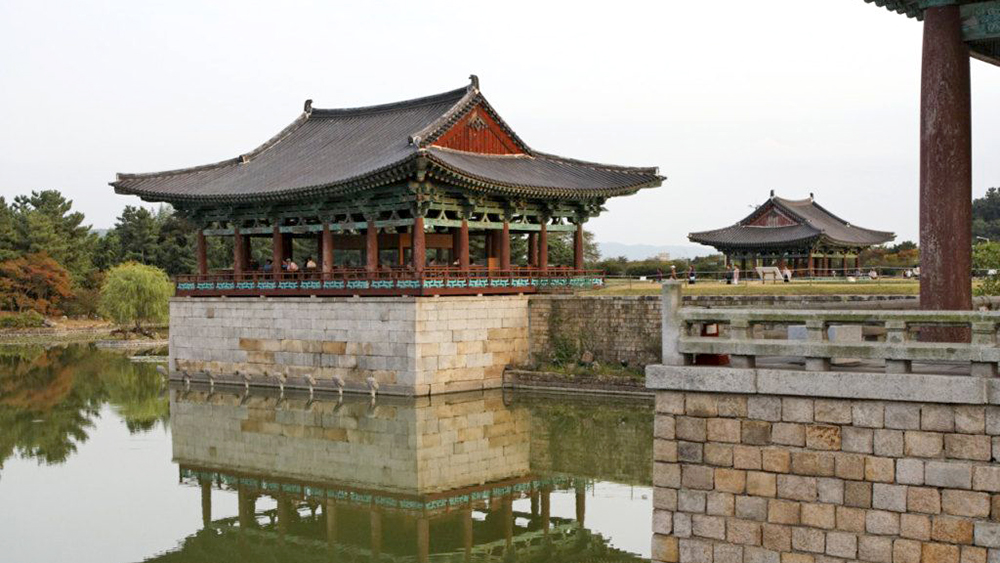 Donggung Palace was considered a secondary palace to the main complex and was used by the crown prince. It’s considered an excellent example of Silla architecture. The main palace, Banwolseong, which now lies in ruin throughout the surrounding forest and hillsides, once boasted several remarkable structures. In the years since the fire that destroyed the complex, many relics from it have been found in the nearby Anapji Pond. 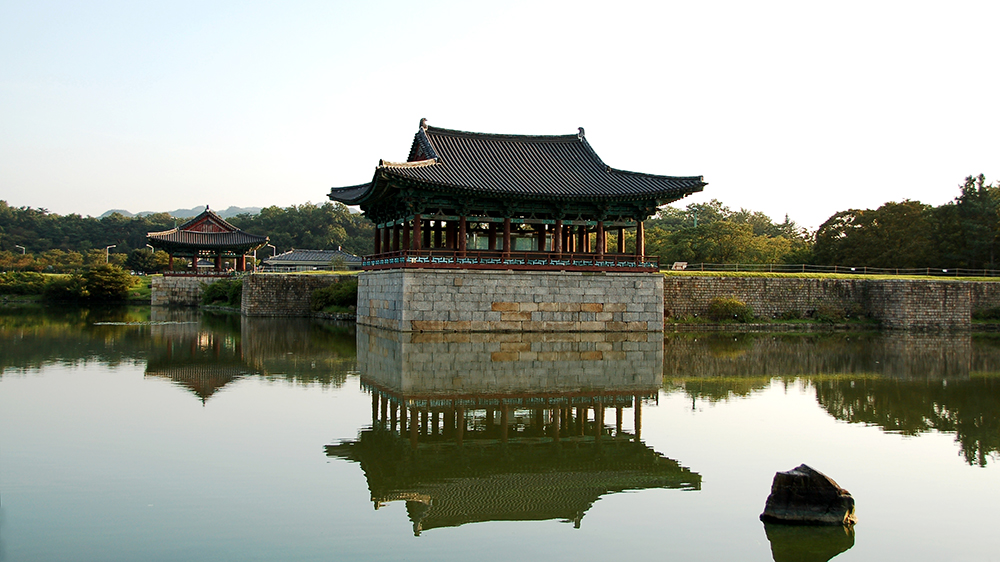 Anapji Pond, now known as Wolji Pond, is an artificial body of water that was was commissioned by King Munmu in 674. The oval-shaped pond served as a pleasure garden, which celebrated the unification of the Korean peninsula during the Silla Kingdom.

Check out 5 Things You Must Do in Daegu, South Korea 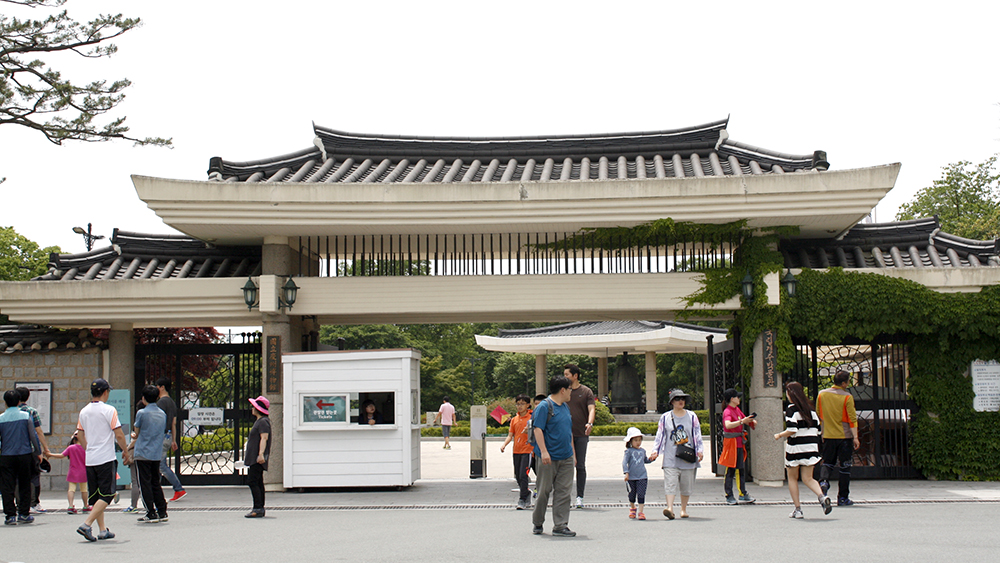 Adjacent to the ruined temple complex, Daereungwon Tomb Complex, and the Cheomseongdae Observatory, is the Gyeongju National Museum. This fantastic museum is perfect for those who want to dive even deeper into Gyeongju, Korea’s ancient capital. 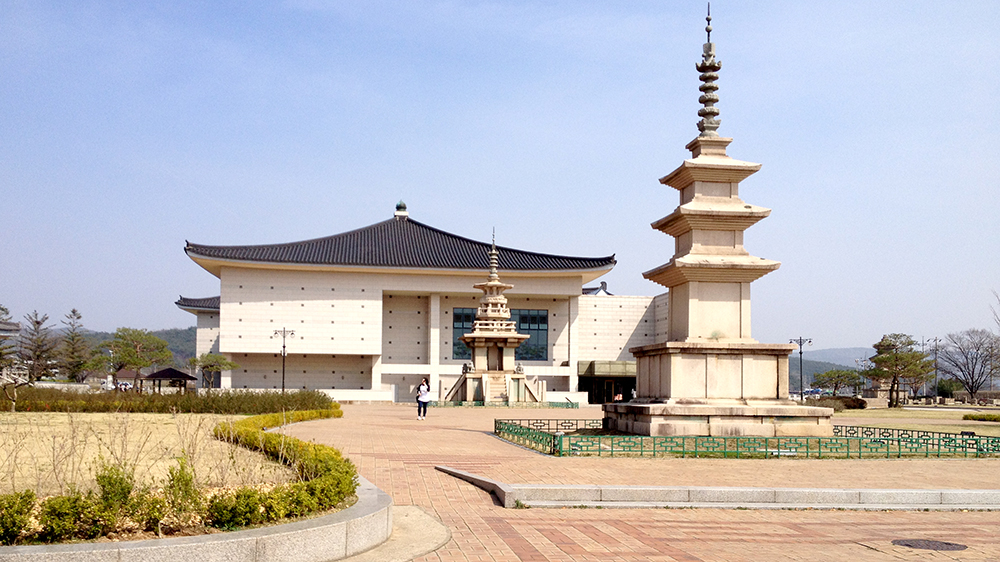 Here, visitors can view a substantial collection of relics from the Silla Kingdom era including statues, jewelry, pottery, Silla crowns, swords, petroglyphs, and the Bell of King Seongdeok. Some of the items on display were recovered from the nearby Wolji Pond, formerly Anapji Pond. As is the norm in South Korea, many of the museum’s exhibits are located outdoors. 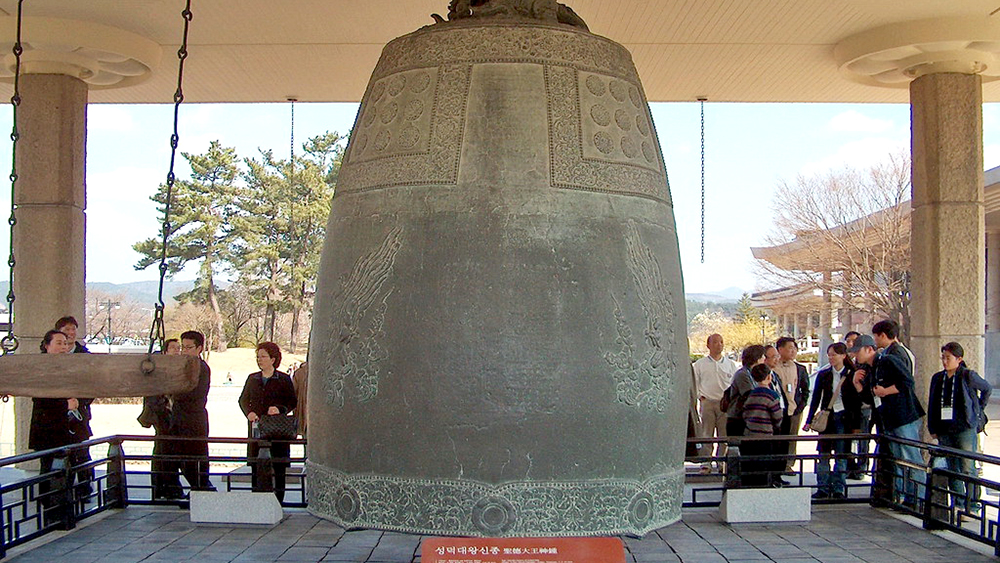 If you have the time to visit this incredible museum, please do. Its artifacts provide a greater understanding of the rise of civilization in southeastern South Korea. This makes it one of the most important sites in the area. It’s also the perfect place to learn more about Gyeongju and its remarkable history!

Check out Korean Foods You Must Eat in Daegu, South Korea

Have a Korean Chinese Feast 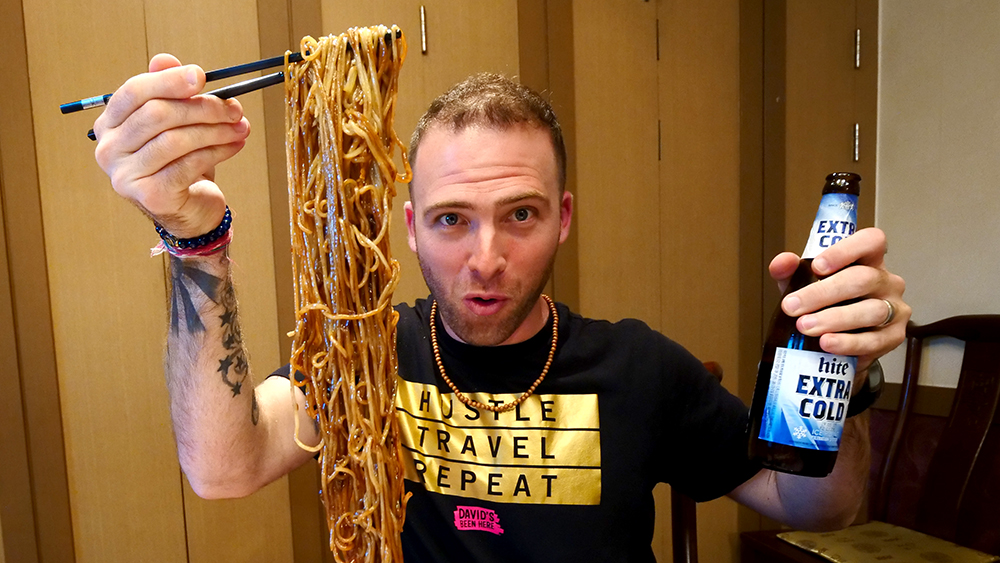 If your visit to Gyeongju is a quick day trip from Busan or Seoul, you’ll probably want to grab lunch or dinner at some point. I highly recommend trying Korean Chinese food there. Korean Chinese food is a hybrid cuisine that was created by the ethnic Chinese and ethnic Korean populations in South Korea. 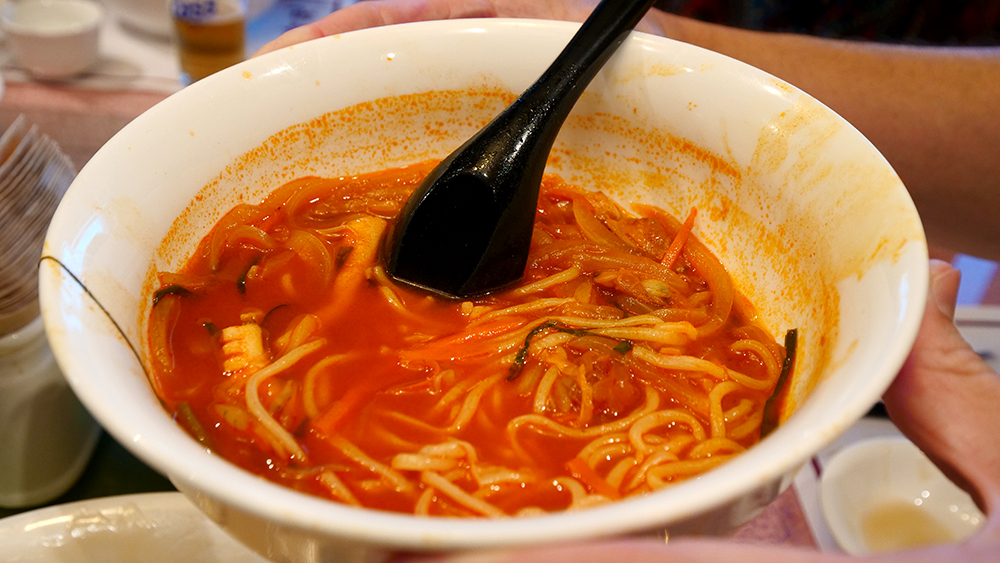 Korean Chinese food was derived from Chinese cuisine, but uses Korean flavors and ingredients. The best place to sample these flavors is Eohyang-Won Restaurant in Gyeongju, Korea’s ancient capital. 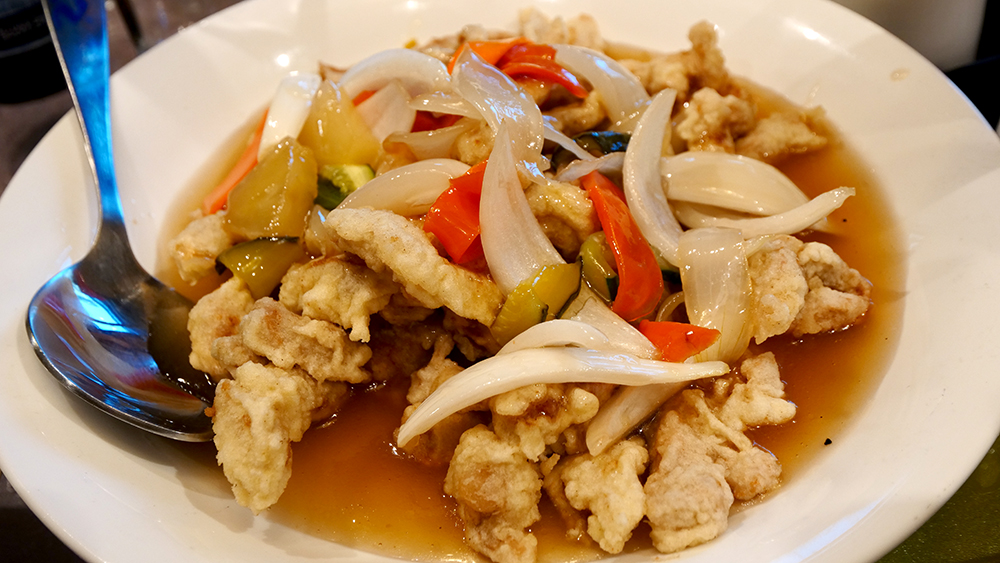 If you’re a pork lover like me, you can’t go wrong with the tangsuyuk, with is nuggets of breaded and deep-fried pork. The pork is served in a sweet-and-sour sauce with onions, pineapple, and carrots. Tangsuyuk has a nice, chewy texture with a bit of crispness on the outside from the frying process. It’s quite tasty and reminded me of sweet and sour chicken! 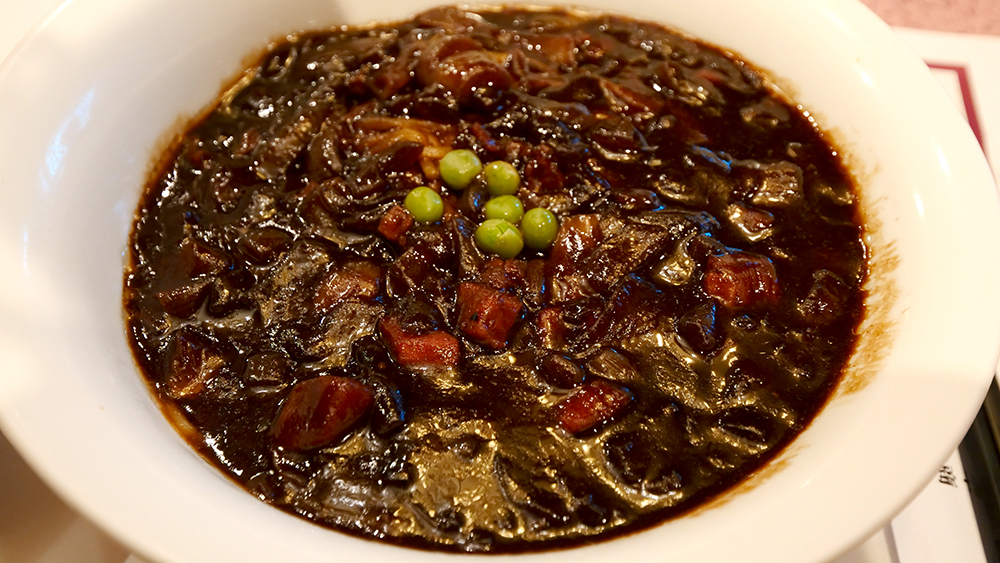 One of my favorite foods at Eohyag-Won Restaurant is a decadent pork and noodle dish called jajangmyeon. It’s essentially Korean Chinese noodles that are served in a greasy sauce made from black bean paste. It’s rich and bursting with flavor and contains delicious chunks of pork. Because it’s a high-carb dish that’s loaded with fat, it’s probably not the thing you’ll want to eat if you’re on a diet, but man, is it tasty! 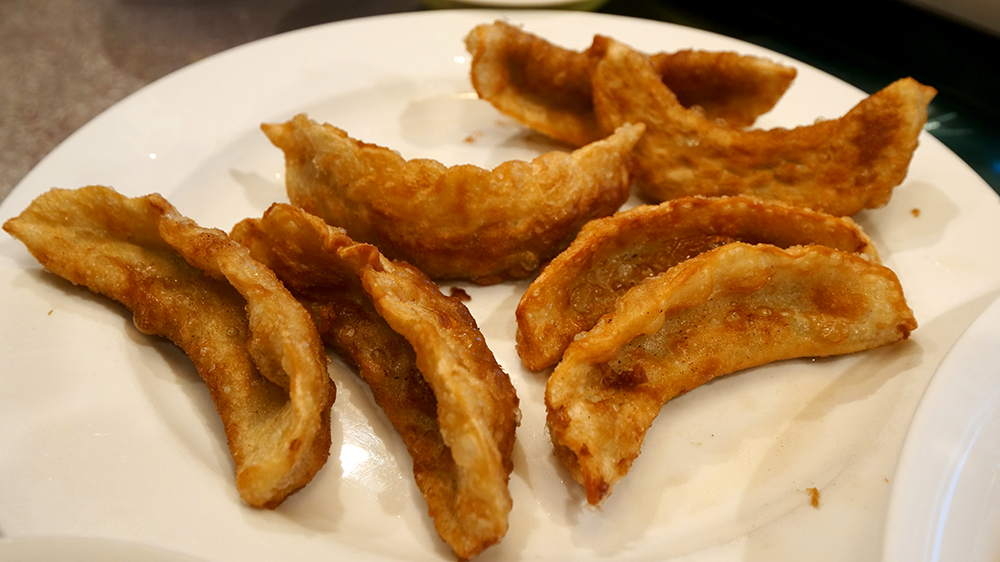 Another fantastic dish I suggest trying is a spicy, seafood soup called jjamppong. My friend Chris tried this dish, which consists of bits of seafood like squid and long noodles in a hot broth. The spice in the broth is reminiscent of that of kimchi, and the noodles are so long that you can cut them with scissors before you dig in.

As you guys know, I’m a pork fanatic, so I have to recommend the pan-fried dumplings filled with pork. They’re called gun-mandu and are super crunchy and flavorful. I tried them with a thick, black sauce that was served on the side, which gave it an added boost of flavor! 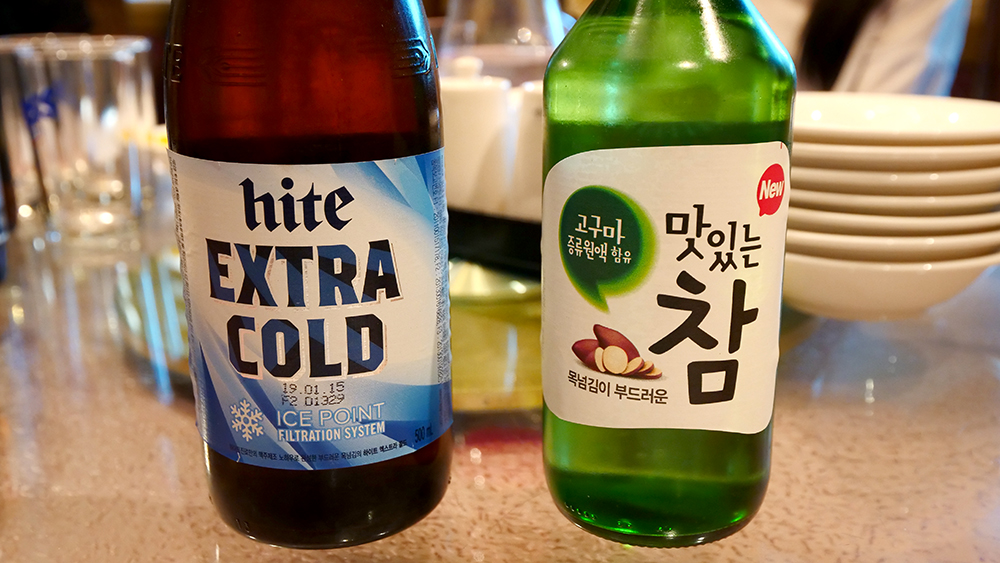 There’s nothing better than combining a fatty, greasy meal with a cold beer, so kick back and enjoy your Korean Chinese feast with a light and refreshing Hite Extra-Cold beer. I also recommend having some soju, which is a fermented sweet potato drink that’s reminiscent of vodka.

Check out my Korean Temple Stay at Beomeosa Temple: Everything You Need to Know guide! 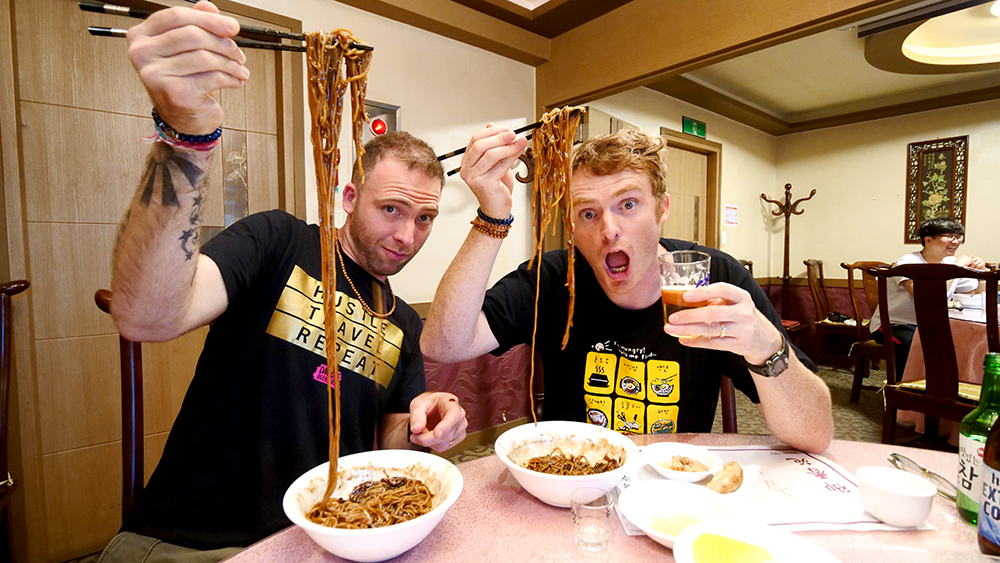 I cannot recommend taking a day trip to Gyeongju, Korea’s ancient capital, enough. Even if you’re not the biggest history fan, you will still find plenty of things to marvel at as you explore this gorgeous UNESCO World Heritage Site. From palaces to tombs, this city is the best place in South Korea to dive into the country’s fascinating history. The day I spent there was a highlight of my two weeks in South Korea and I’m sure you will love it as well. Book a trip to South Korea today to experience the amazing sites and history of Gyeongju for yourself!