The next leg of my Surinamese adventure was finally upon me! Come along with me as I enjoy an unreal Surinamese breakfast in Paramaribo and then hop on a flight to Palumeu. I couldn’t wait to start this next adventure in Suriname! 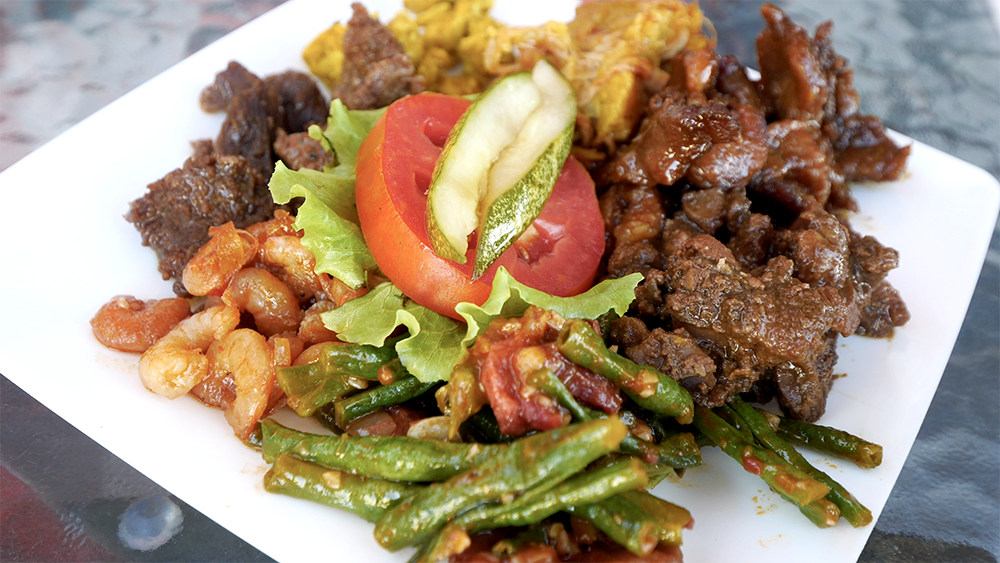 My adventure started in the capital of Suriname, Paramaribo. My boy Imro from Jenny Tours and I started off our day at a local restaurant called Jennely’s Food House that sells at least 25 different breakfast options. Usually, you pick an item that they stuff into a piece of bread, but I wanted to try everything, so I decided not to have too much bread 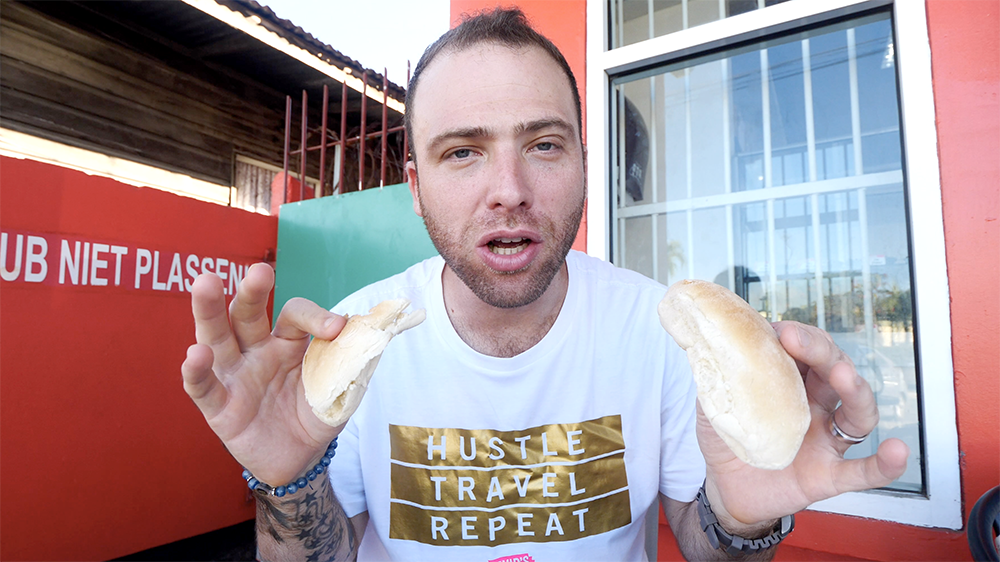 The food looked like a unique mix of Indian, African, Dutch, and Indonesian, and looked really good. I was so excited to begin my Surinamese breakfast in Paramaribo!

Check out 5 Reasons to Visit Isadou Island in Suriname

I got some cucumber, tomato, lettuce, beans, beef, pork, chicken curry, kidneys, and shrimp! I began my Surinamese breakfast in Paramaribo with my shrimp. I opened my bread and put some of them inside. They were nice and small and super tasty. The shrimp were oily and fresh and came in a tomato-based sauce. 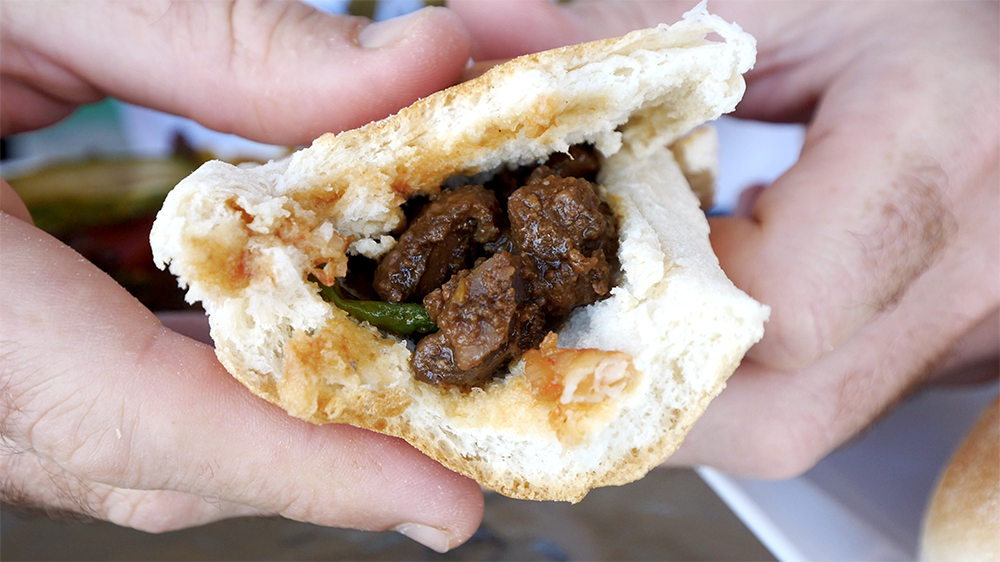 Then, I continued my Surinamese breakfast in Paramaribo with the chicken liver. It was dense and so full of flavor! The bread made it super filling. I got some hot, black coffee between bites and then tried some of the pork by itself. It was sweet and seemed to have some Chinese influences. The beef was darker and chewier than the liver, but it was hard to eat with the bread. 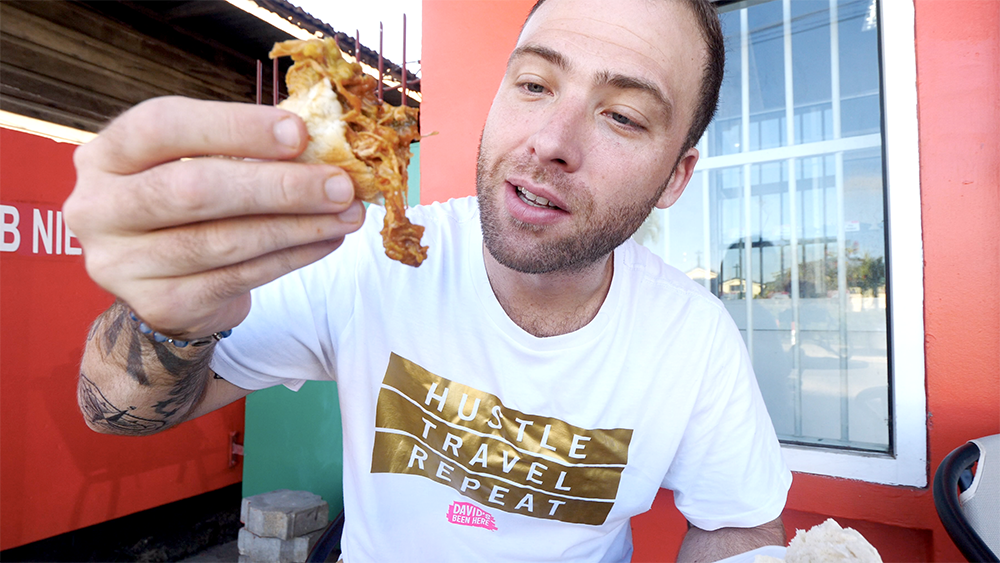 Next, I tried the pom, which is like a chicken salad with mangoes and vegetables. The sweetness from the mangoes was off the charts! Then I tried some beans, which reminded me of Thailand. Everything had a unique flavor. Then I took the bread and soaked up the remaining sauce on my plate! 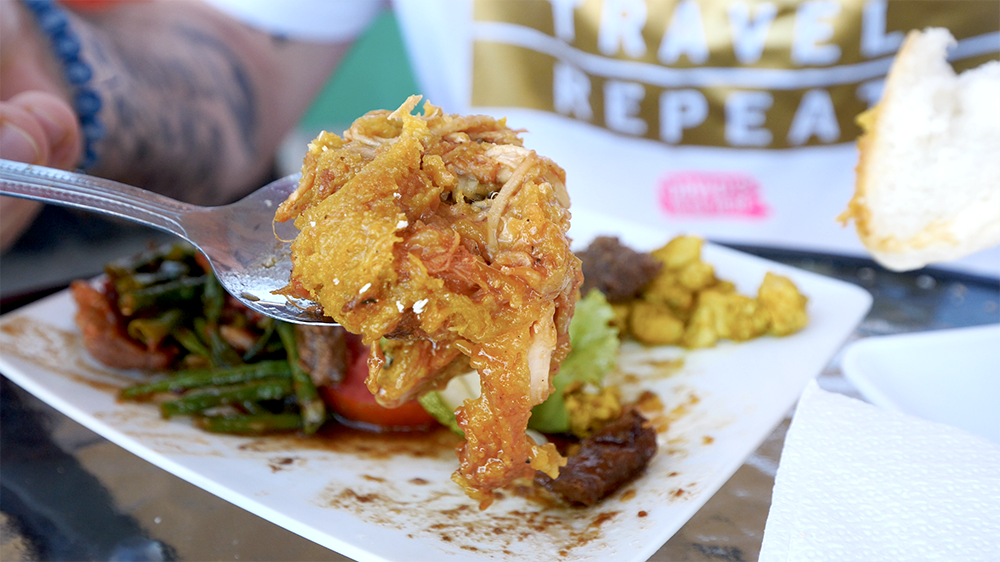 Then I grabbed some liver, sprouts, and greens. It was crunchy, sweet, and spicy and was my favorite dish so far! I couldn’t get enough of it! You have to eat at Jennely’s when you come to Paramaribo.

Then, I went inside to talk to the woman working there. I had to tell her how amazing my Surinamese breakfast in Paramaribo was! 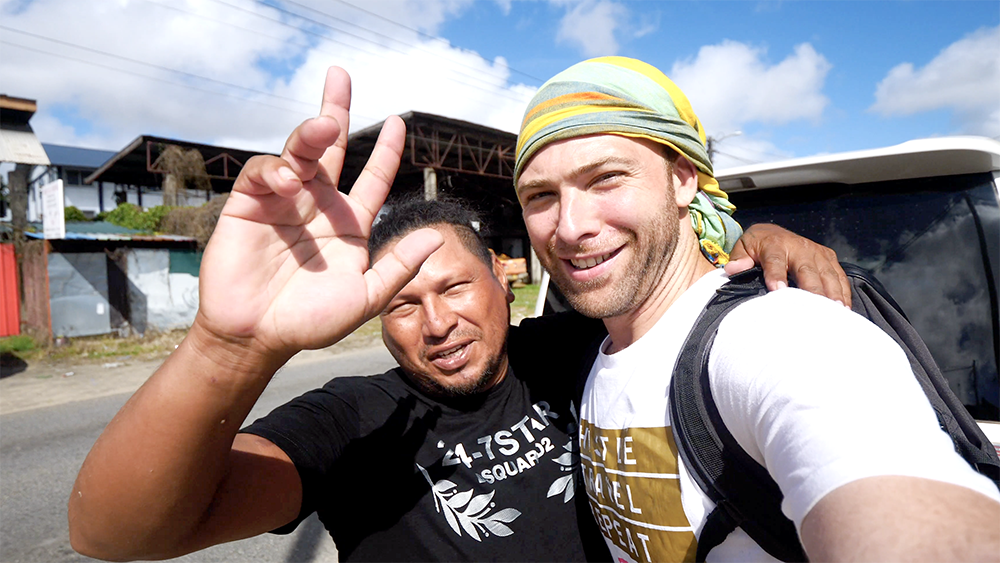 From there, we went back to my hotel and grabbed my things. Sadly, I had to say goodbye to Imro, who wouldn’t be coming with me on the next leg of my trip. I packed all my things into a taxi and headed off to the charter airport! 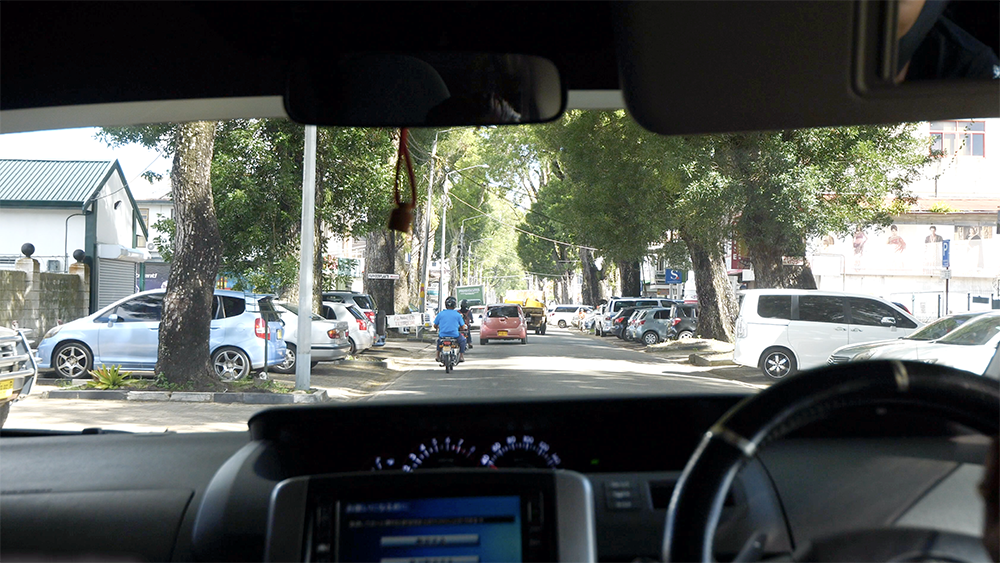 This would be my first time on a chartered plane in several years. It’s an awesome experience because it’s usually just you and the pilot. It’s expensive, but it’s always worth it. I’d be flying to a spot near the Surinamese border with Brazil! 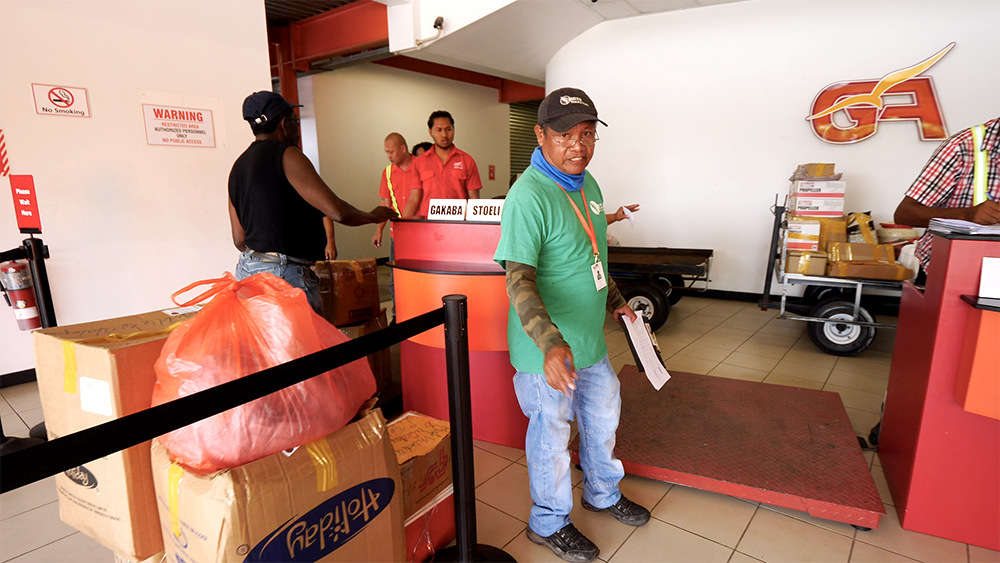 At the airport, I met my guide, Julius, from Mets Travel and Tours. We’d be flying Gum Air down to Palumeu on a 10-seat charter plane. They weighed me and my luggage and I chilled in the VIP area with other people who’d be flying on the plane. 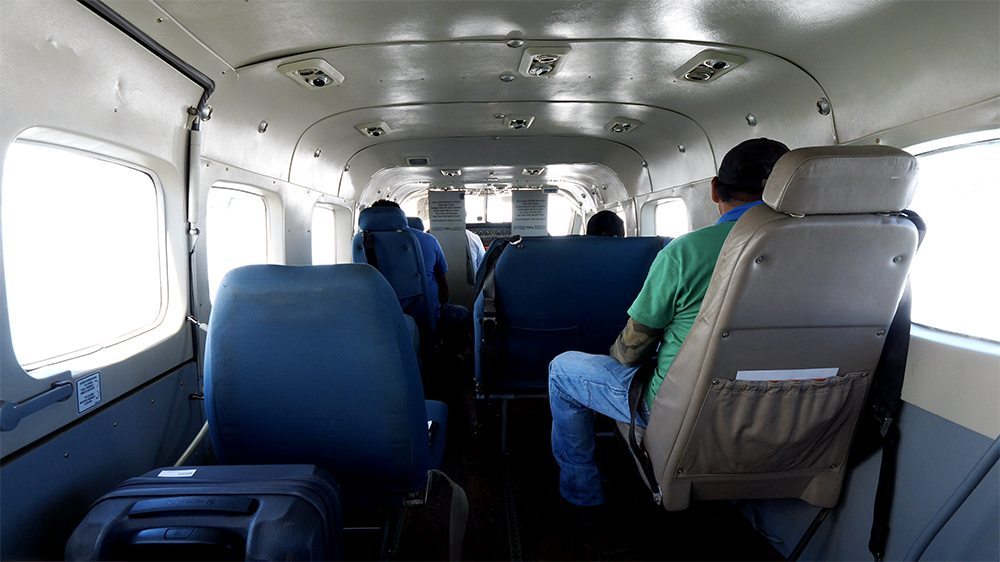 I boarded the plane and sat in the back. There, I had awesome views out both windows! We took off! I was a little nervous because the turbulence in tiny planes is much worse than larger planes. But I was also excited to get to the jungle! We flew over the Brokopondo Reservoir, gold mines, and the Suriname River.

After 30 minutes, we landed to pick up 4 more passengers. There was a lot of turbulence as we flew through the clouds. I could see the rainforest below as we descended. We landed in a tiny, green airstrip, where four others boarded. We only had 15 more minutes to go! 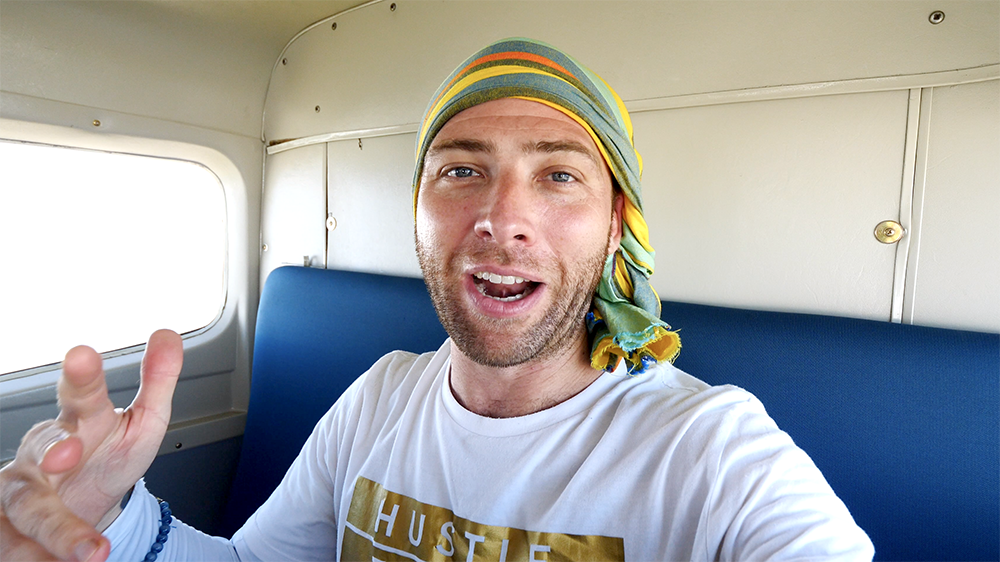 We flew right over the Suriname River as we took off again, and I could see villages below. It was so beautiful! We descended again fast and landed at another landing strip in the jungle. We were going to have tons of adventures at Palumeu! I couldn’t wait! 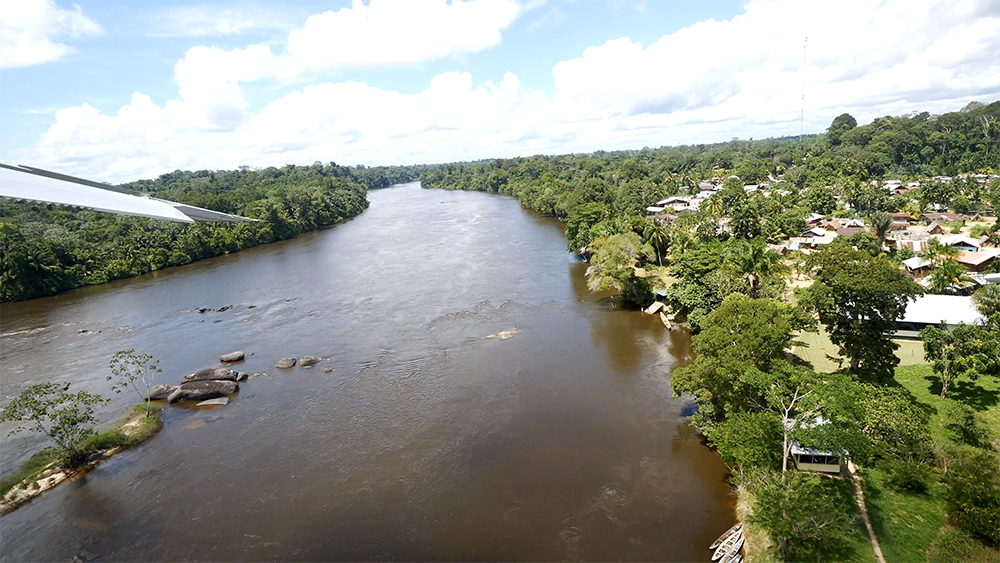 I hope you liked this video of my travels to Palumeu! If you did, please give it a thumbs up and leave a comment. Also, please subscribe to my YouTube channel so you don’t miss any of my upcoming travel/food adventures!