Located near the south end of India’s Arabian Sea coast in the state of Kerala is the city of Varkala. A northern suburb of the state capital, Thiruvananthapuram (Trivandrum), Varkala is a commercial and industrial center and a tourism hotspot. Known for its wide, picturesque beach lined with stunning, cliffs, Varkala is a southern Indian paradise. Because of this, there are countless things to see, do, and eat in Varkala, Kerala, India. 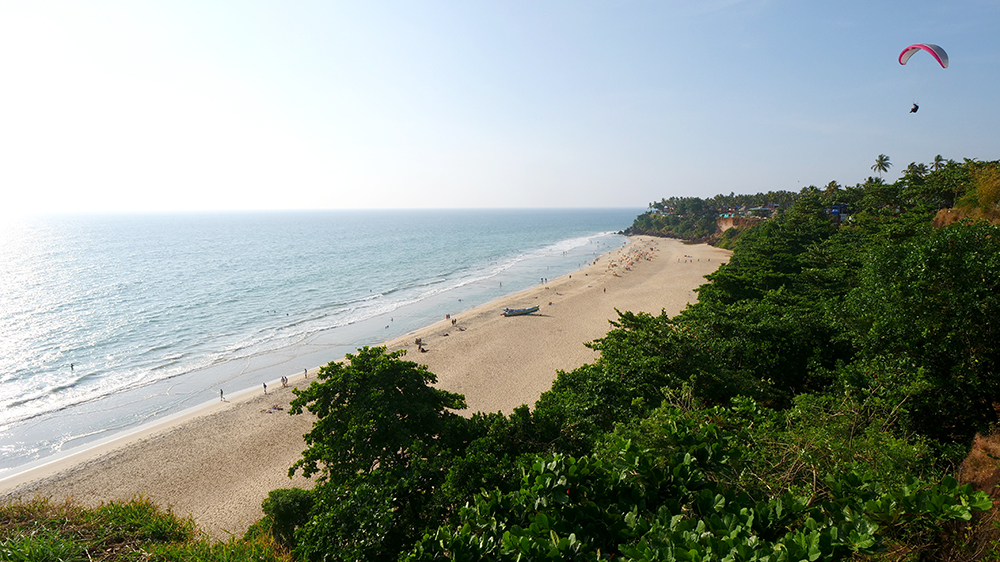 While Varkala’s beach and cliffs are its main attraction, they are by no means the only points of interest in town. The city, which gives off the feel of a hippie or rasta town, is also home to stunning, ancient temples. Shoppers will delight in the retail therapy opportunities along the promenade. Visiting foodies will be in heaven trying authentic Kerala food in town. 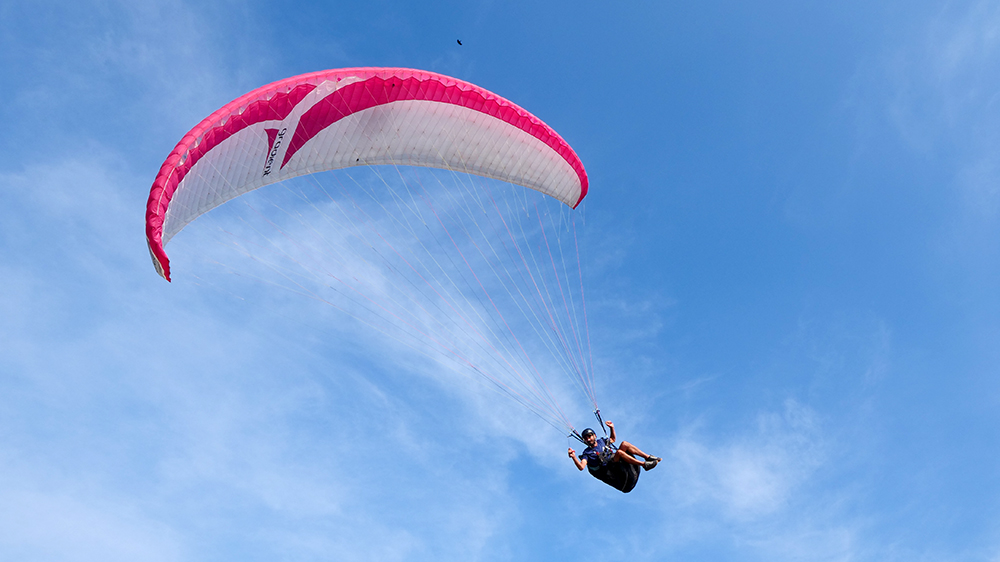 In other words, don’t make the mistake of only seeing the beach. Instead, spend at least 48 hours in town, set aside a few hours to visit the beach, and then use the rest of your time to see the many other things this fantastic city has to offer. These are the top things to see, do, and eat in Varkala, Kerala, India. 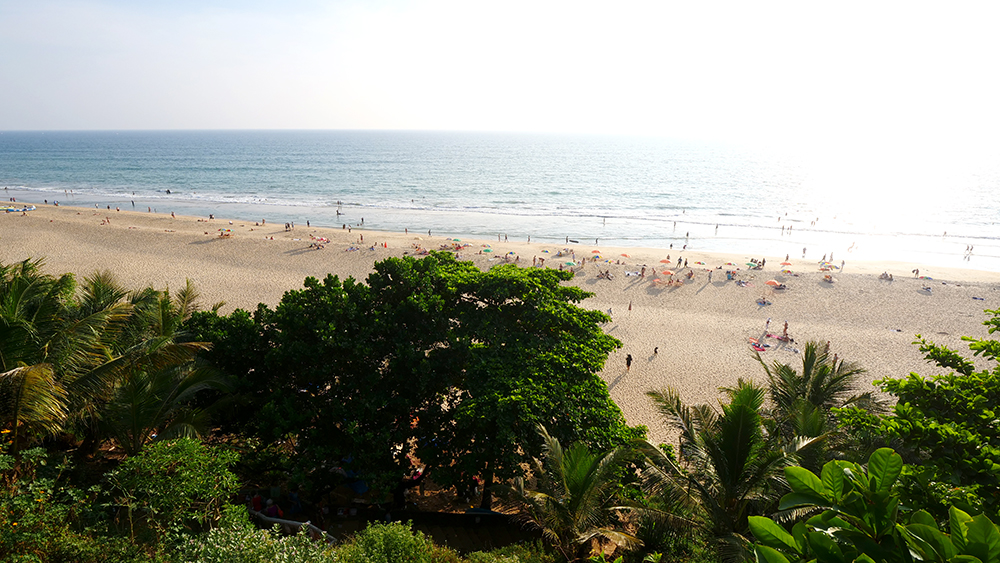 The crown jewel of Varkala is, of course, Varkala Beach. Also known as Papanasam Beach, this gorgeous stretch of sand is the city’s main attraction. It’s also one of the most beautiful natural attractions I’ve ever seen while traveling through the country. The beach can be reached by descending a set of stairs that lead from the boardwalk atop its famous cliffs to the sand below. 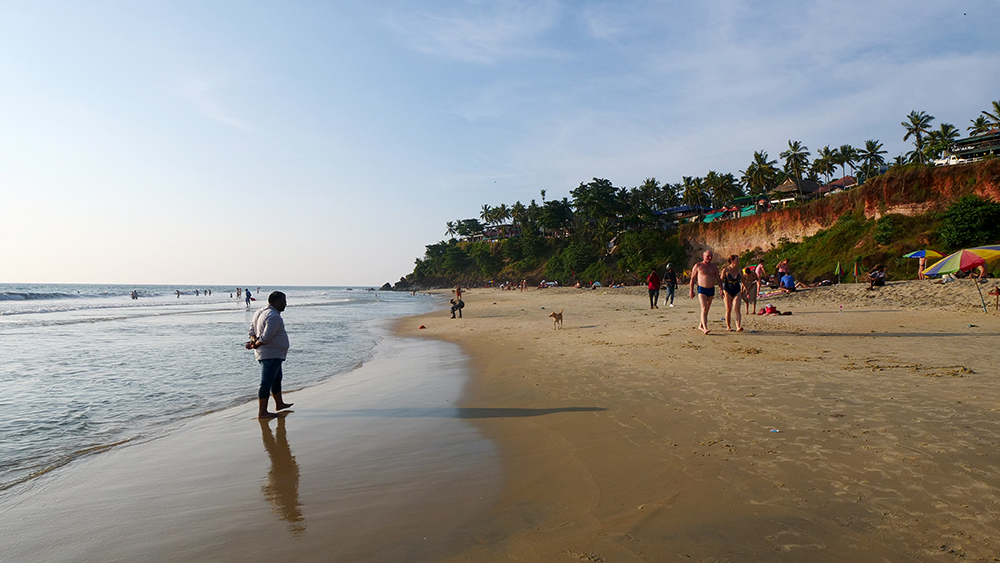 The walk from the boardwalk to the beach takes less than a minute. From the bottom of the stairs, you can see just how wide and expansive the beach is. This haven for sunbathers and swimmers wasn’t busy at all when I visited during my only afternoon in town. 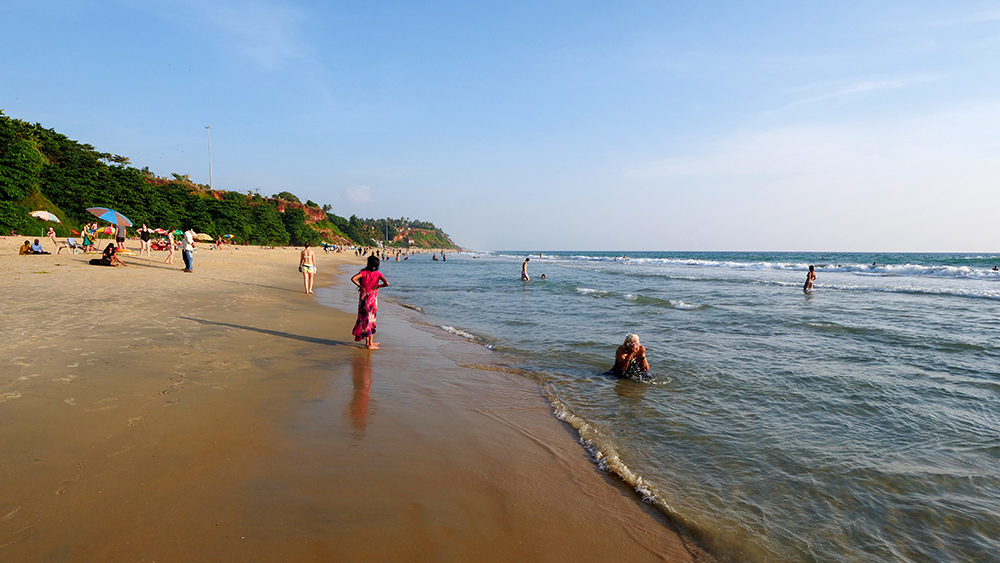 While most beaches are best enjoyed by looking out at the water, the opposite is true here. Instead, walk to the water’s edge and turn to look back toward the cliffs to admire their beauty. The cliffs get rougher and more jagged as you follow the beach. The Varkala Cliffs are the only place along the otherwise flat Kerala coast where cliffs meet the Arabian Sea. As such a unique geological feature, the cliffs were named a geo-heritage site by the Geological Survey of India in 2015. They’re a can’t-miss when you visit Varkala!

Shop Along the Varkala Promenade 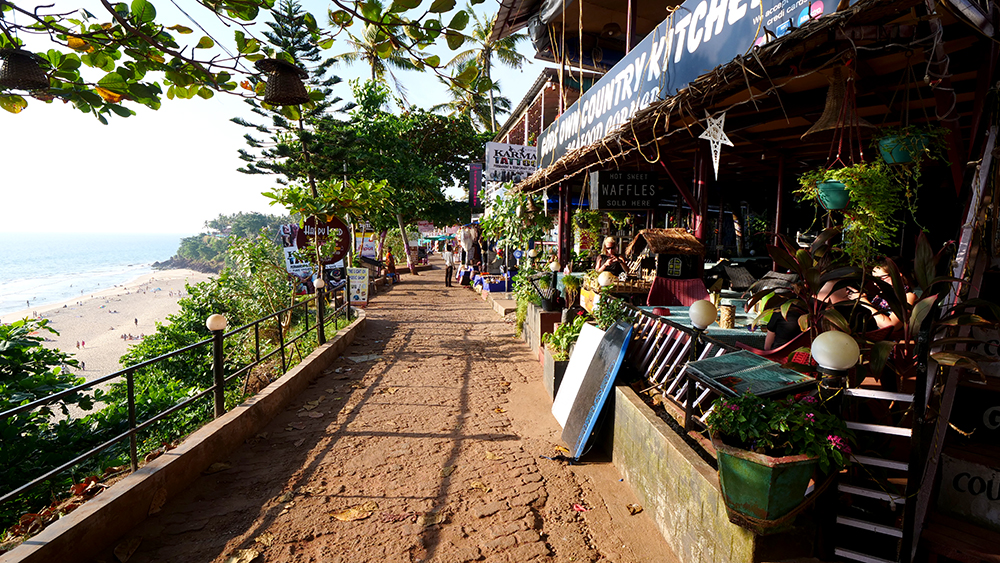 When you head to Varkala Beach, something you cannot miss is the Varkala Promenade. This boardwalk atop Varkala Cliffs is a prime shopping area for tourists. It is lined with shops, restaurants, and cafés where you can grab a snack or a cup of coffee. 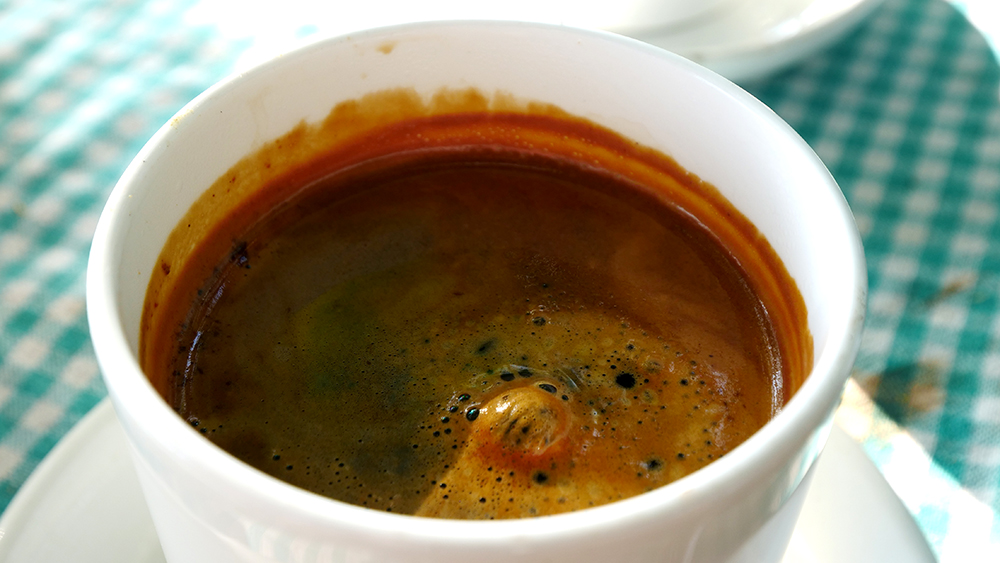 One spot along the Varkala Promenade where you can enjoy a cup of joe is Coffee Temple. This open-air restaurant is famous for their cardamom coffee, an incredibly strong black coffee that has been infused with cardamom flavor. It’s usually served with milk, though they were out of milk the day I visited. The coffee is also usually drunk with sugar to bring out the warm, cardamom flavor. 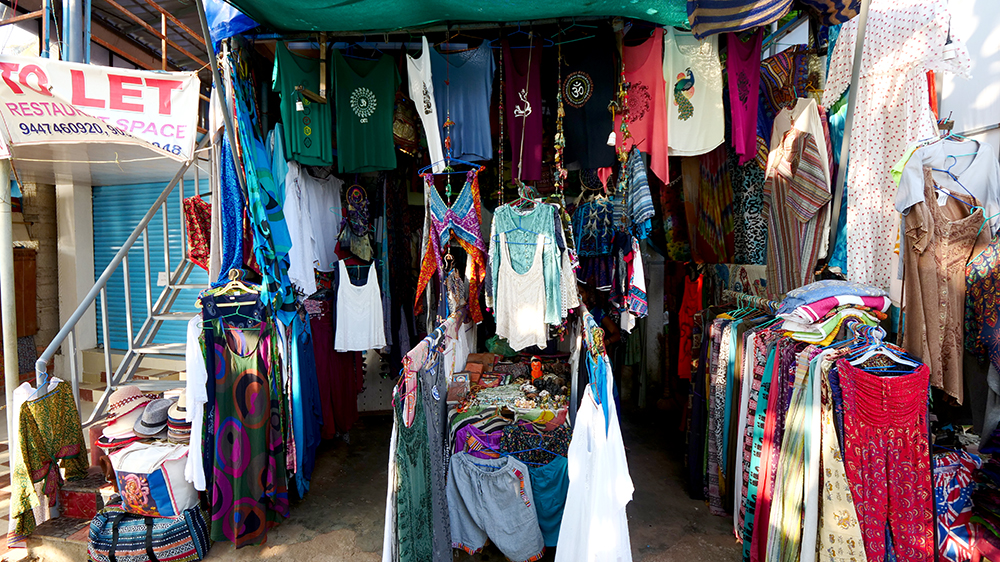 If you’re like me and get overheated or burn easily, you may want to pop inside one of the shops to buy a scarf or shawl to wrap around your head. There are at least a couple of shops that offer them, but those looking for something traditional and non-touristy will have limited options. 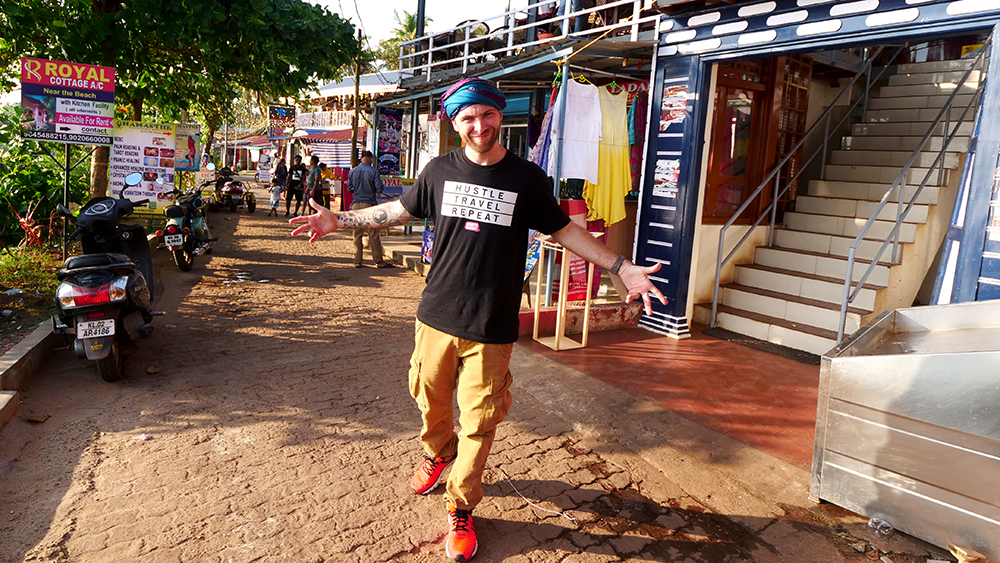 Because it’s a touristy area, the vendors may be hard to bargain with, but don’t let that deter you. I somewhat successfully haggled a persistent vendor down from 450 rupees/$5.88 USD to 380 rupees/$5.02 USD. The cotton scarf I bought from him did the trick, though. My head felt a lot cooler for the rest of the afternoon and evening! 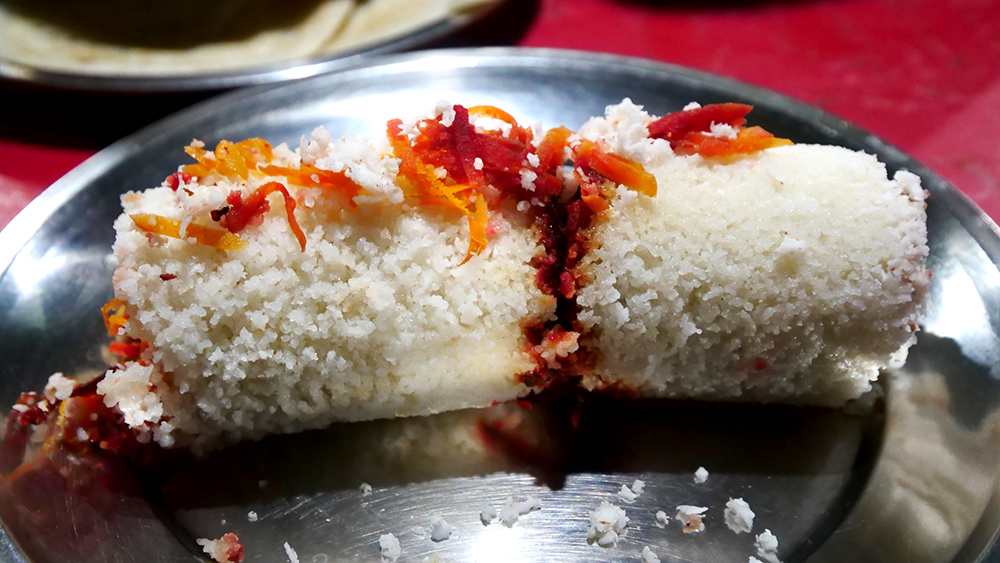 I’m a huge foodie, so every time I travel to a new location, I have to check out its food scene. In Varkala, I suggest heading away from the beach and driving deeper into town to eat. There, look for one of a number of small, outdoor huts that sell authentic Kerala street food. My friend Vishnu and I found one that sold amazing tata dosas, puttu, chicken thoran, parottas, omelets, and more. 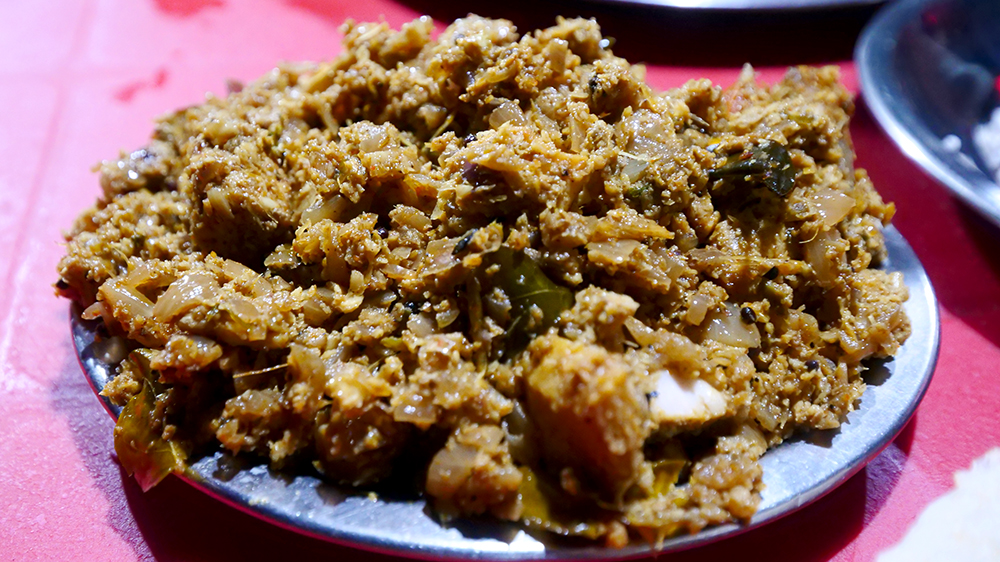 The puttu was like a dense, roll-shaped cake made from steamed rice flour. It’s a popular breakfast item that can be eaten with a variety of other dishes. It contained some delicious shredded beets, which I loved! I also couldn’t get enough of the tata dosas, which were fluffier and doughier than other dosas I’d had in the past. These dosas were more like a savory version of American pancakes and were topped with the chutney. The chutney was nice and spicy, and I really liked it with the earthy rice-and-lentil batter of the dosa. 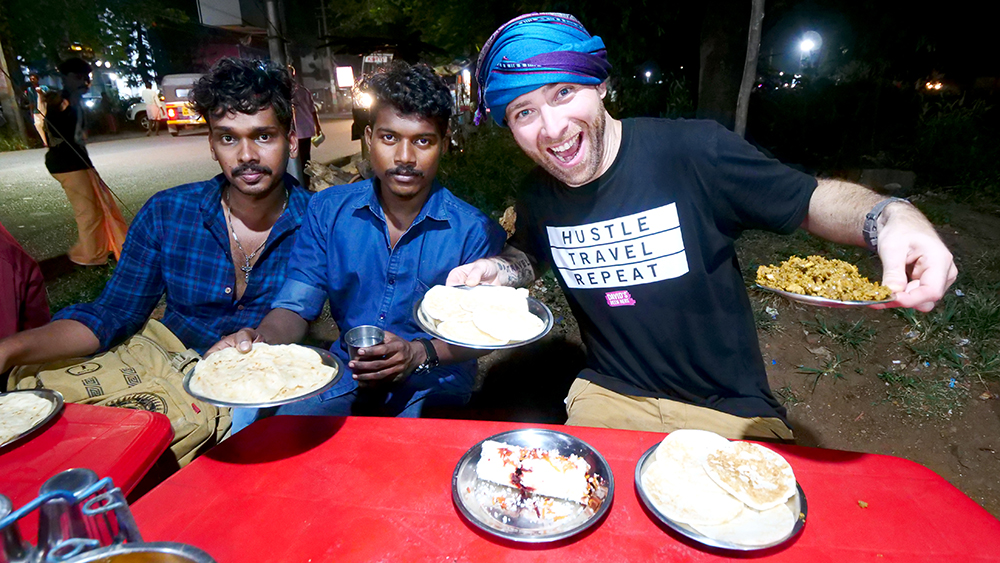 Another dish you should look out for is chicken thoran. This is a spicy chicken dish that contains coconut and a spicy masala. Mash it up with the puttu and eat it together with your hands. It’s fantastic! Another mouthwatering combination you have to try is the dosas, chutney, and omelet. The contrast between the spicy omelet, watery chutney, and fluffy dosa was wonderful! It was like having breakfast and dinner in the same meal!

Best of all, the entire meal costs less than $1 USD. Don’t worry if you can’t find the exact spot I ate at; there are places like it all over Kerala! Finding one is definitely one of the best things to see, do, and eat in Varkala, Kerala, India! 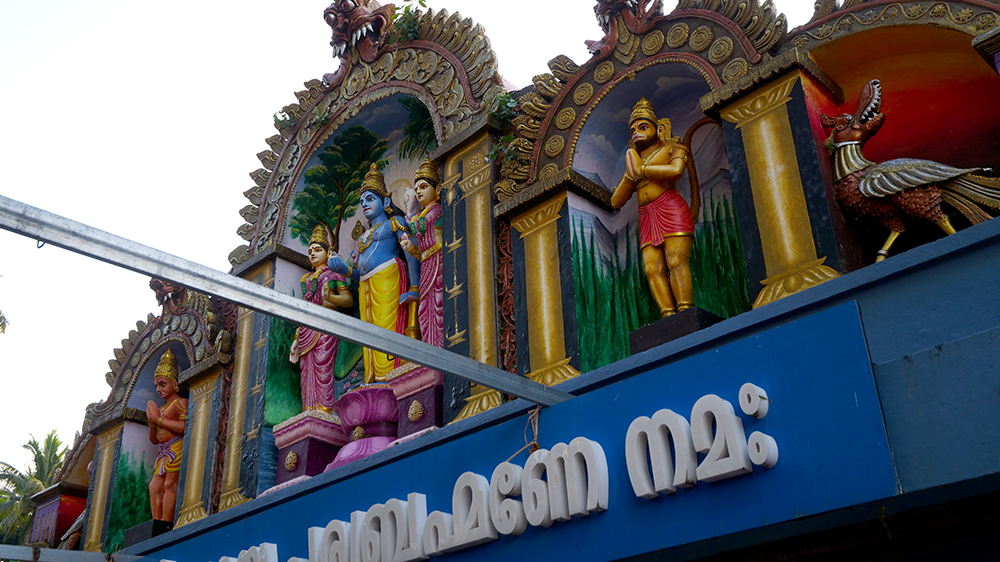 Not far from Varkala Beach is another of the top things to see and do in Varkala, Kerala, India, Janardanaswamy Temple. This ancient Hindu temple and Ayurveda treatment center is just five minutes from the beach and promenade by tuk-tuk. Dedicated to Janardana, or Lord Vishnu, this temple is over 2,000 years old and is one of Varkala’s most famous sites. 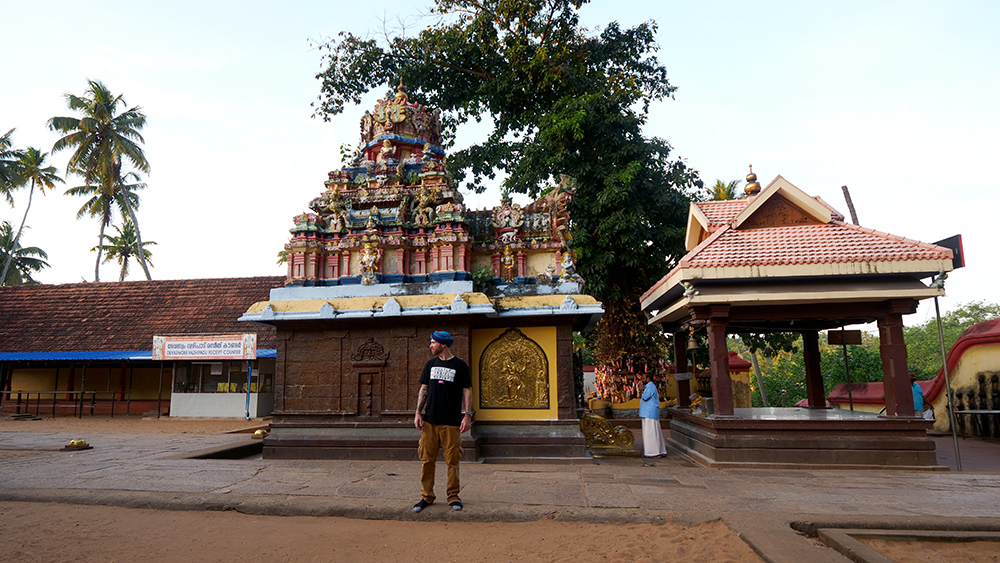 There was some really beautiful music emanating from the temple as I approached. Like all Hindu temples, you must take your shoes off before you enter. Once inside, you’ll find an open courtyard with several points of interest around it. Like many temples I’d visited around the country, there was a large banyan tree, and I also saw a bright, golden flagpole. One of the most interesting features was a tree with hundreds of baby dolls hanging from it. People who want to be parents come to the temple and hang a baby doll from this tree and pray to be blessed with a child. 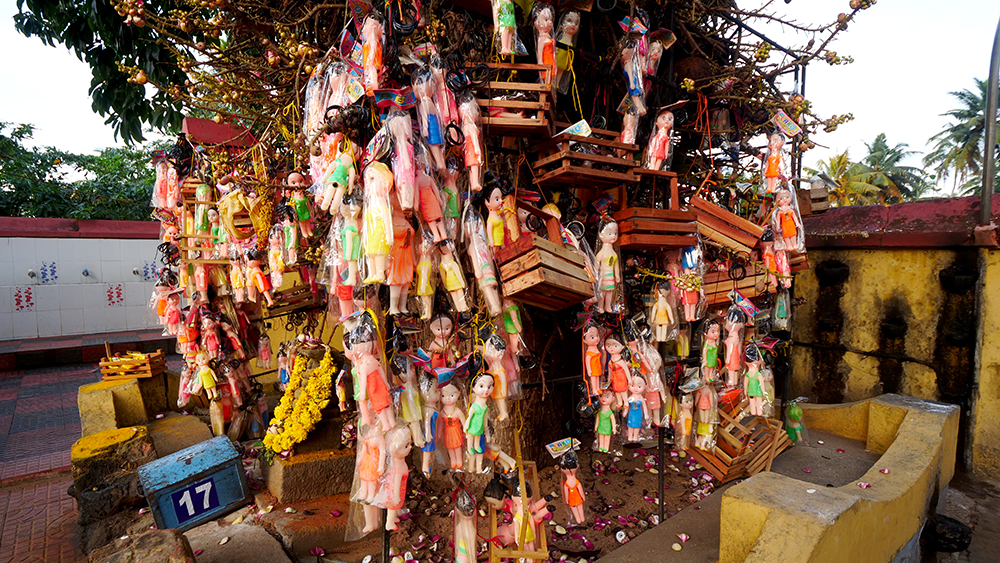 Perhaps the most notable structure is the 2,000-year-old main shrine. Idols of Garuda and Hanuman stand at the entrance of the inner shrine. There’s also an idol to Janardana. Just remember that it is forbidden to film or take photos of idols in Hindu temples, so be sure to stow your phone or camera away before you view them. Overall, visiting Janardanaswamy Temple is a fantastic way to learn more about the Hindu religion and the culture of Kerala! 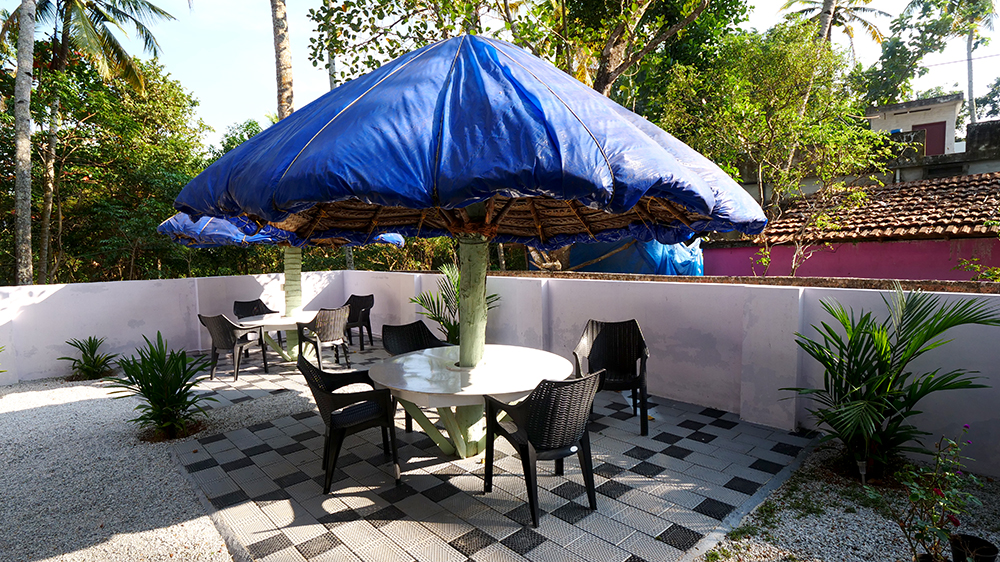 Of course, when you visit Varkala, you’ll have to find a place to stay the night. I recommend the Palm Bay Beach Residency. Situated down a narrow alley leading away from the Varkala Cliff Helipad, this beautiful, luxurious resort is considered one of Varkala’s best. The large building boasts eight spacious rooms with attached bathrooms. It also contains an apartment, an outdoor dining area, a yoga hall with a view of the sea, and much more! 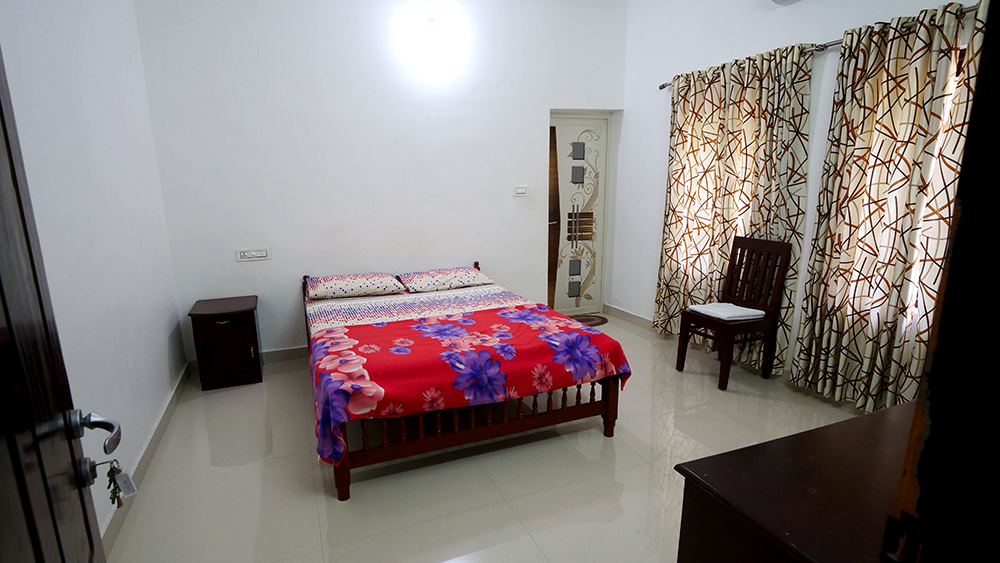 The Palm Bay Beach Residency is dedicated to the personal wellness of its guests. It’s known for its helpful and respectful manager and personnel, cleanliness, and relaxing atmosphere. My room, which contained a comfortable king-sized bed, had everything I could have wanted and was a great place to come back to after a long day of adventuring! Book your stay at the Palm Bay Beach Residency here. 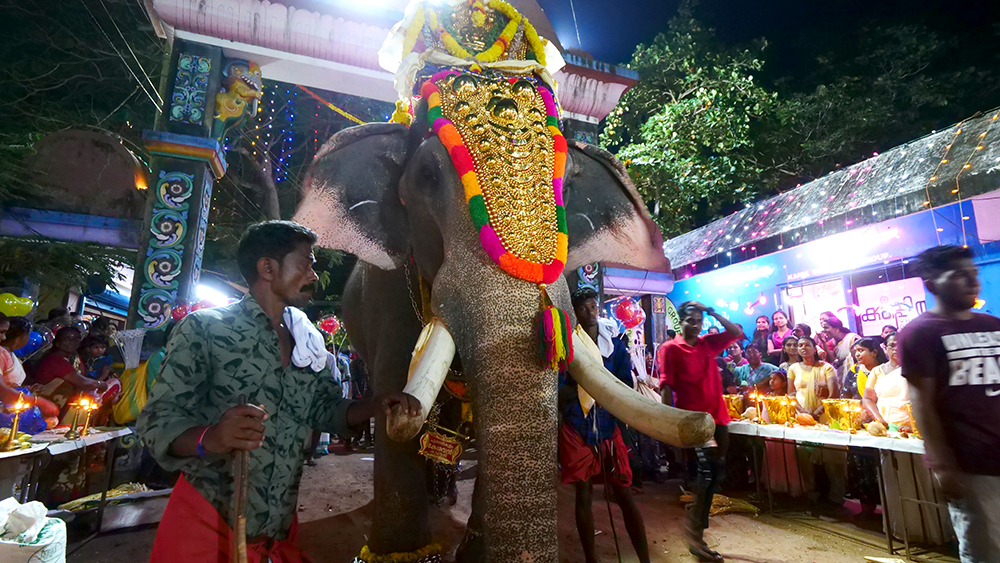 An important aspect of Kerala culture is its famous temple festivals. Experiencing one is one of the best things to see, do, and eat in Varkala, Kerala, India. These festivals are massive, cultural spectacles that incorporate music, religion, dancing, and even animals. These celebrations take place at various times of the year. You can find a helpful schedule of temple festivals here. 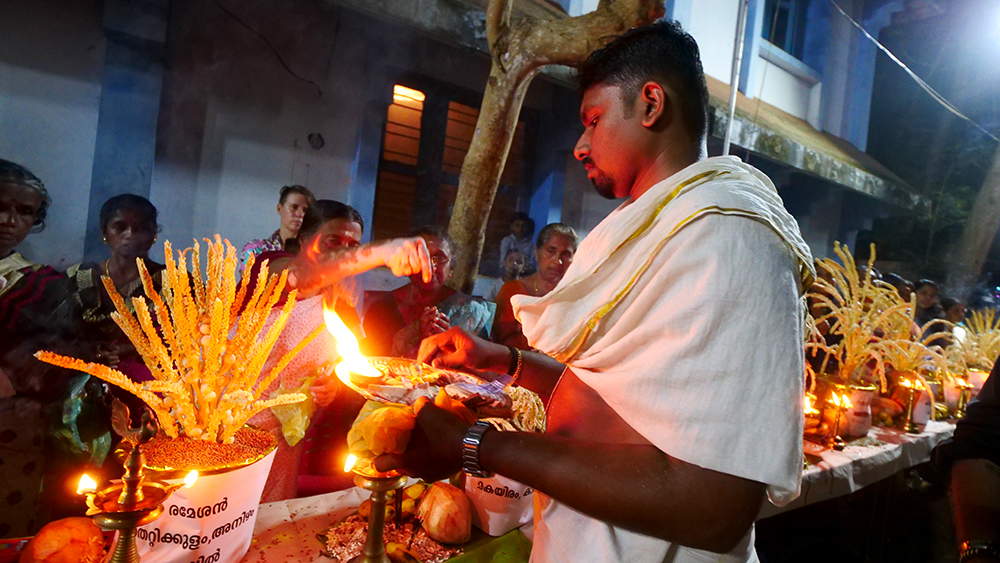 I had the random luck of finishing my dinner just as a festival kicked off at the nearby Kuttikkattil Bhadrakali Devi Temple. Long before we got there, we could see lights strung up along the streets to guide pilgrims toward the festival. We could also hear the music from quite a distance away! 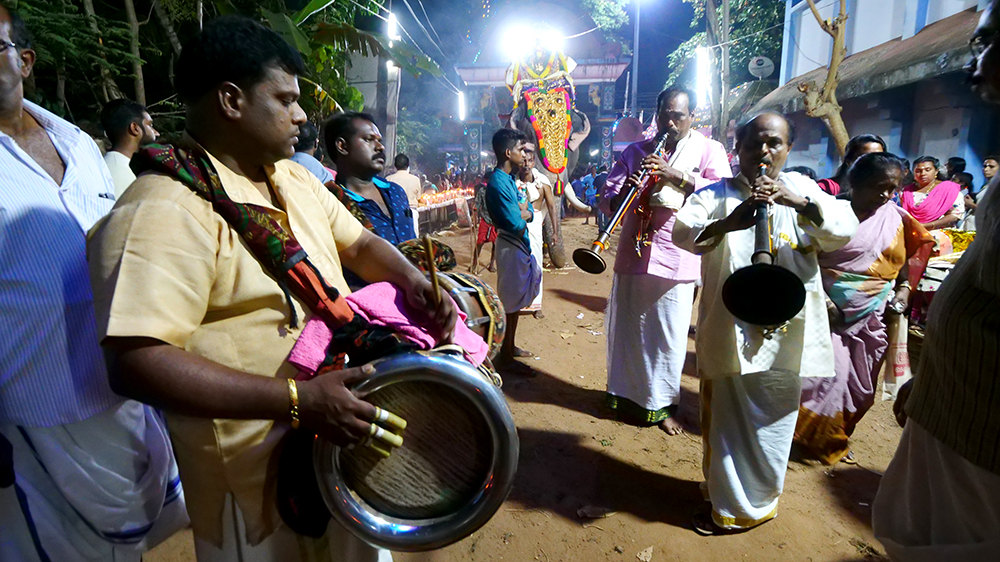 At the temple, the brightly-lit festival was in full swing. There were colorful floats following a parade route, along which people offered rice plants and coconut flowers for prosperity. We watched up close as a man took the offerings and threw them toward a marching elephant. The elephant was adorned with a bright, colorful idol on its head, and I was told the elephant represented a god. 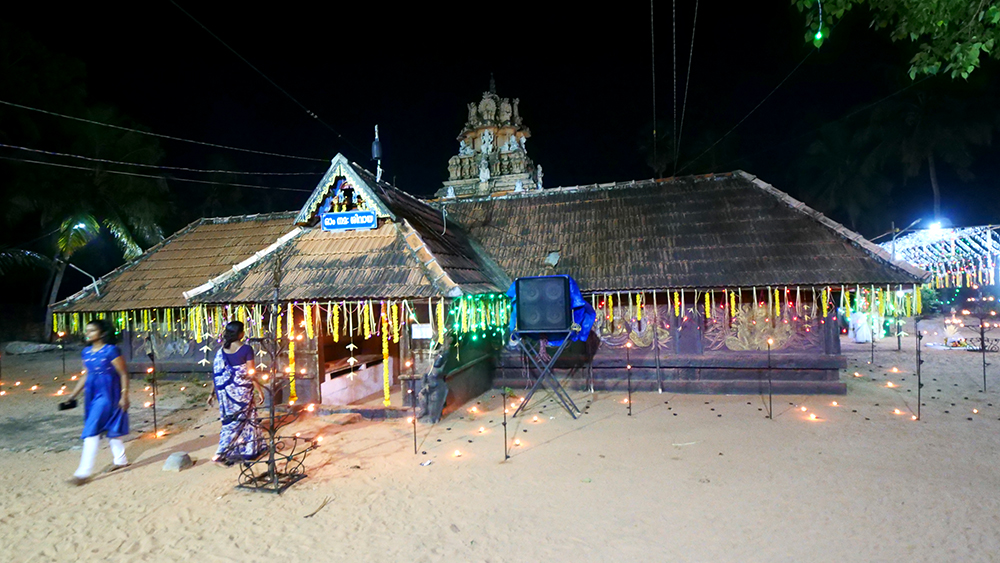 Another important aspect of the festival was music. Dozens of musicians marched down the parade route, playing traditional percussion instruments in a beautiful chenda melam and band melam performance. Festival-goers surrounded them and danced in time to their rhythmic beating. Further along were more lights, a banyan tree, and people waiting in line. I was told they were there to welcome Lord Shiva. 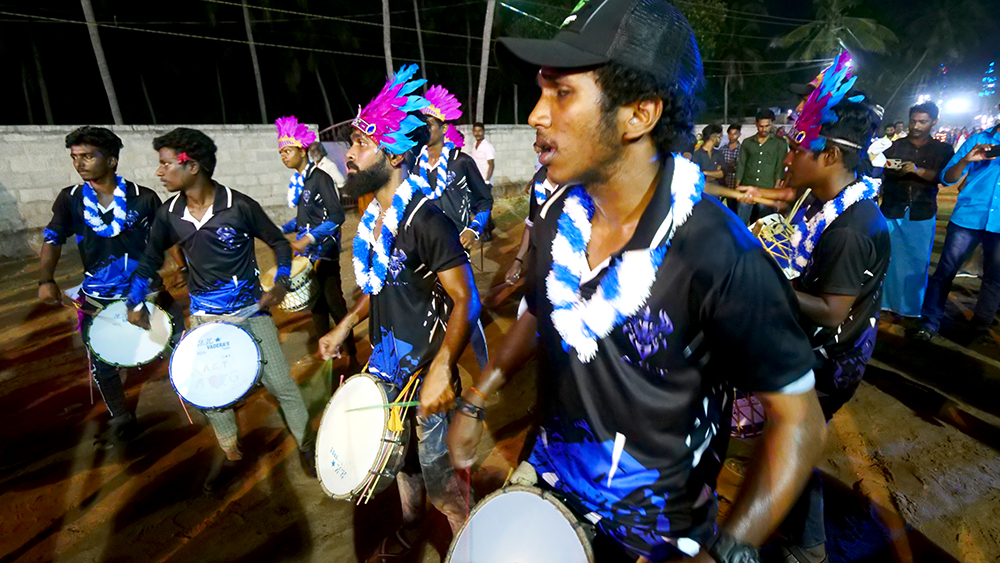 While witnessing this festival was blind luck for me, be sure to check the festival schedule to see when you can visit one. It’s one of the top things to see, do, and eat in Varkala, Kerala, India for a reason. It’s a fantastic way to immerse yourself in Kerala’s beautiful culture! 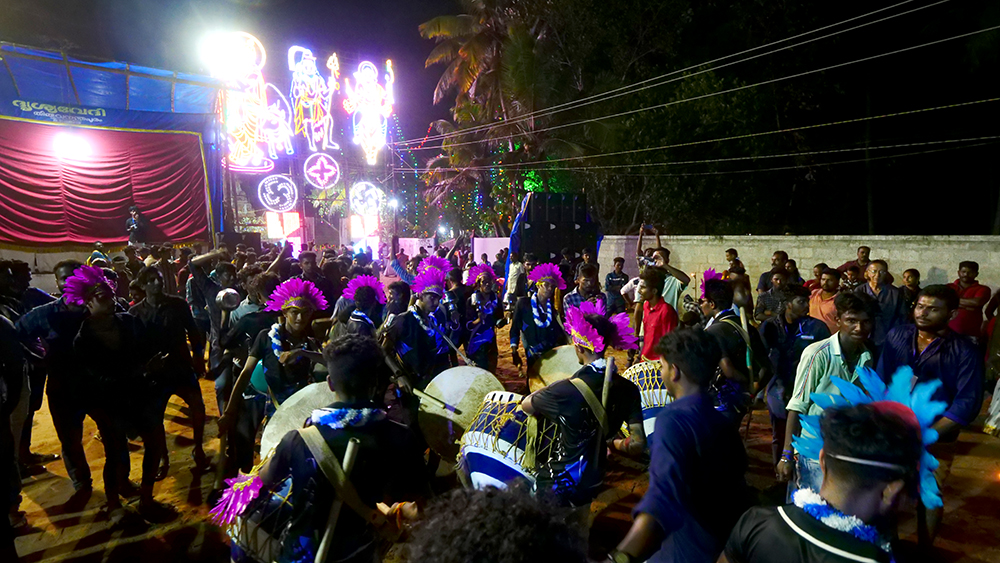 The city of Varkala is full of surprises. Whether you visit to just sunbathe or see its cliffs or check out its temples, the unexpected is right around the corner. I was not only surprised by the sheer beauty of Varkala Cliffs, but also by the quality of its food and the incredible festival I had the honor of witnessing. That’s the beauty of Varkala. Just when you think you’ve seen it all, you get hit with a wonderful curveball that shows you that you’ve barely scratched the surface of what it has to offer. Book a trip to Kerala today to begin your exploration of Varkala! 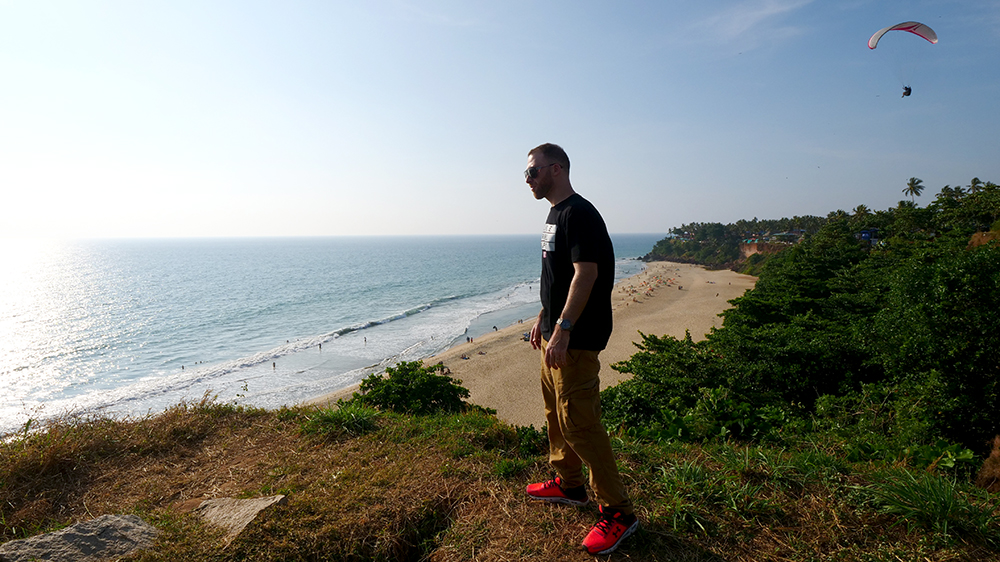 I have to thank my friend and guide Vishnu for taking two days out of his schedule to show me around Trivandrum and Varkala. The first 48 hours of my Kerala trip wouldn’t have been possible without him and his generosity. Be sure to follow him on Instagram!