Even though I had to say goodbye to my friend Vishnu, my third day in Kerala continued in the city of Alappuzha with my boy Ebbin Jose. Ebbin is an amazing food vlogger from Kerala who showed me around for the rest of my time in the state! Come along with us as we enjoy a phenomenal South Indian seafood feast in the Kerala Backwaters and take a tour of our amazing houseboat in Alappuzha, India!

My afternoon continued in gorgeous Alappuzha, also known as Alleppey. Our first order of business was to check into our houseboat. Some of them are also just restaurants. There are a lot of companies, as well as different sizes and qualities. We parked, and I took what I needed from my suitcase instead of lugging the whole thing onto our houseboat. I grabbed my passport, some underwear and socks, and a couple of changes of clothes, along with my charging equipment, and put them in my carry-on. 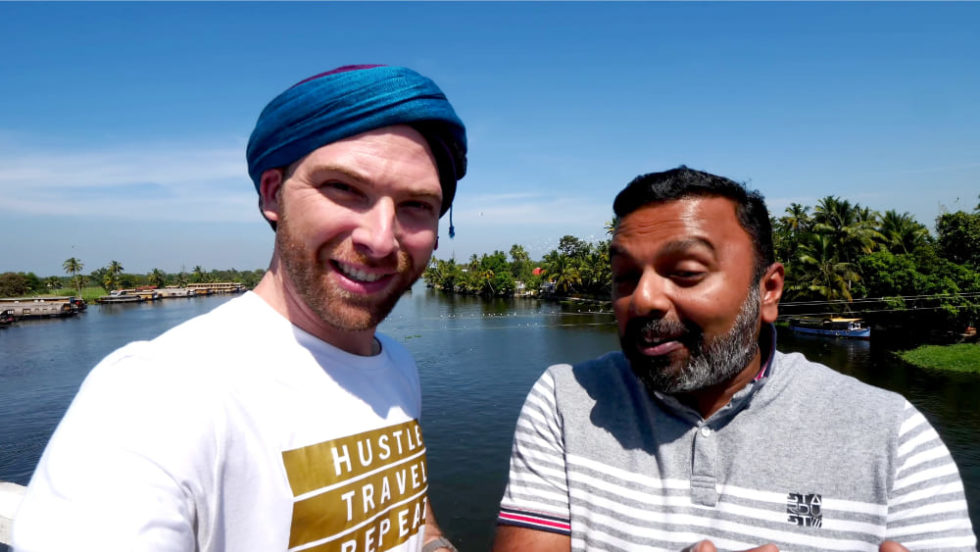 I saw a single-bedroom houseboat, but Ebbin told me that there are some that have up to ten bedrooms in them! We walked along a path along the backwaters, which is a collection of lakes, rivers, and canals. 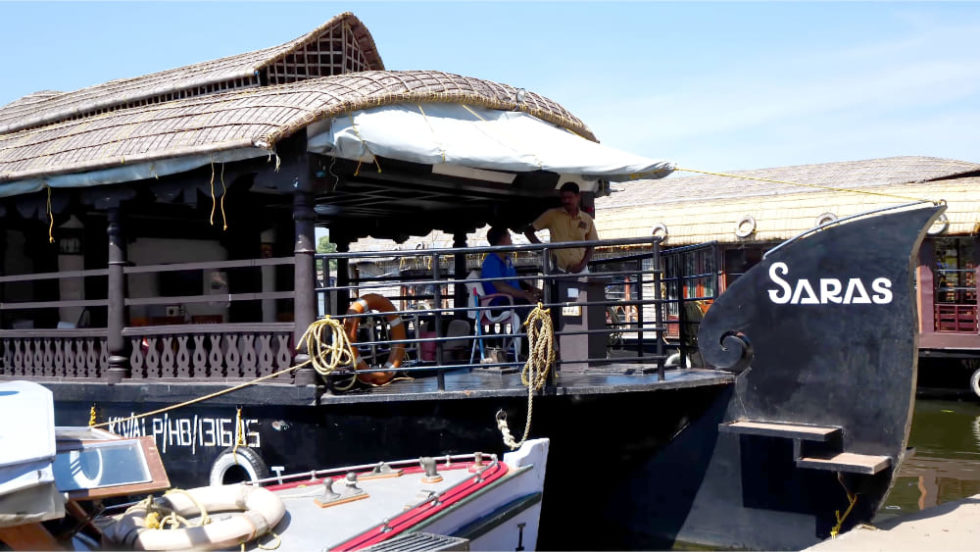 Our accommodations for the next 24 hours would be the amazing Cruise Land Houseboat. I hopped on our three-bedroom, traditional-style houseboat and was immediately blown away. The first thing I saw was the captain’s seat where he steers the boat. Inside, I met the staff, who greeted me with a handshake and a hug, along with a fresh coconut with a straw in it. The coconut water inside was so refreshing and exactly what I needed!

Inside the houseboat was a nice living room with five couches, chairs, a dining table, a TV, and more. On the dining table were pineapple, bananas, and bottled water. Then, I went off to explore the rest of the houseboat! 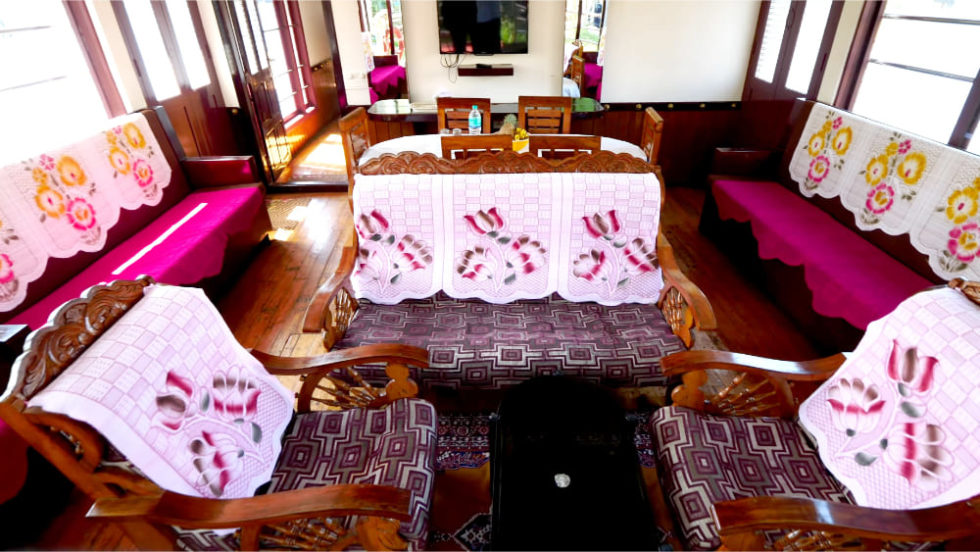 The bedrooms were located down a hall on the side of the boat. The first bedroom was super nice with a twin bed, a ceiling fan, and a nice bathroom with a toilet, sink, and shower. It was like being in a hotel! Just past that was a sink where you can wash your hands before and after your meals. The second bedroom was a mirror image of the first room. 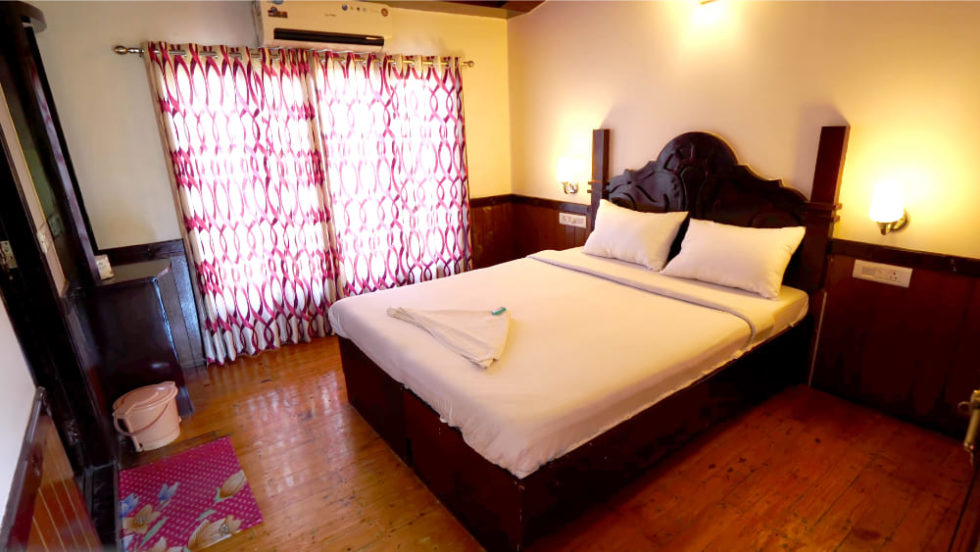 Further down the hallway were huge windows where you can look out at the Kerala Backwaters. I could see other houseboats, lily pads, and more out there. The third bedroom was identical to the first two, and at the back was the kitchen! We were going to catch some fish and cook them up and make some curries! 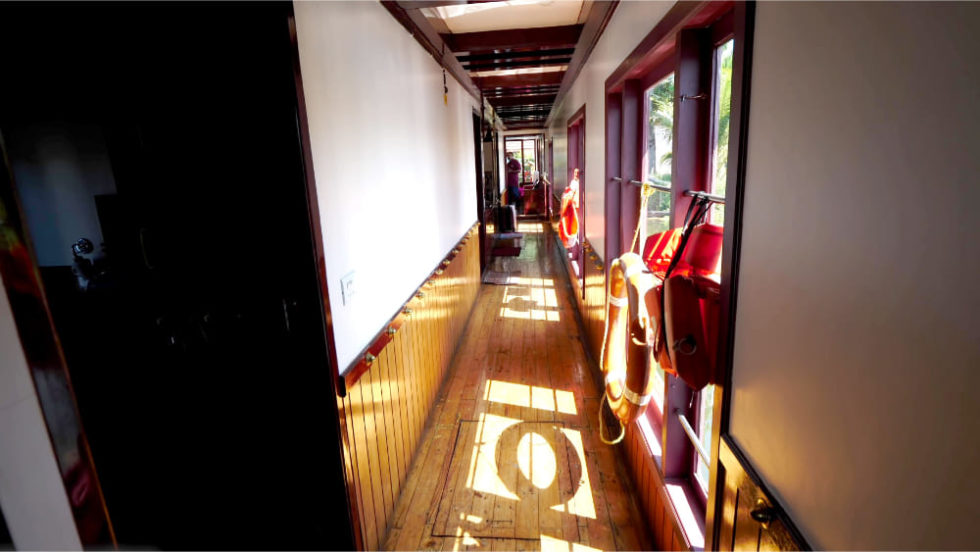 At the very back of the boat was a little balcony where you can relax and just watch the sunset. This area was known as the Venice of the East. Foreigners used to come here trade and buy black gold and spices like pepper, cardamom, and cinnamon, which come from Idukki. The spices came here to Alappuzha and then went to the rest of the world! 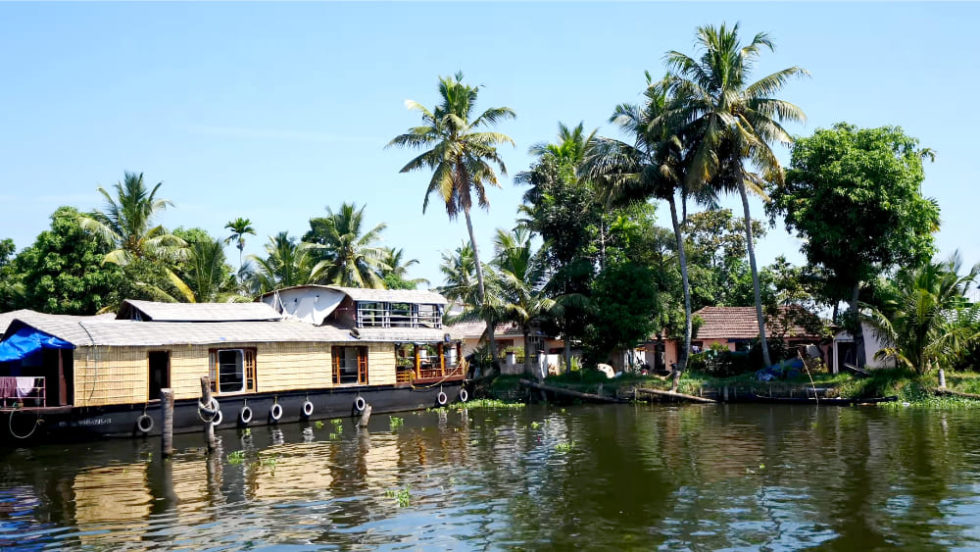 Renting a houseboat is something you have to do when you come to Kerala. It’s so beautiful and peaceful. It’s the one thing I knew I wanted to do! This region, called Kuttanad, is filled with rice paddy fields, coconut groves, and backwaters. We’d see some rice paddy fields and a temple dedicated to Buddha later! The Kerala backwaters in Alappuzha, India is truly breathtaking in every way!

Once you get out of the port of entry, the rest of the houseboats start to melt away. There are over 800 registered houseboats here! Back inside, the chef brought me some tender coconut meat on a plate. It’s one of my favorite things! It’s cold and refreshing. Ask them for the flesh and they’ll give it to you for free! 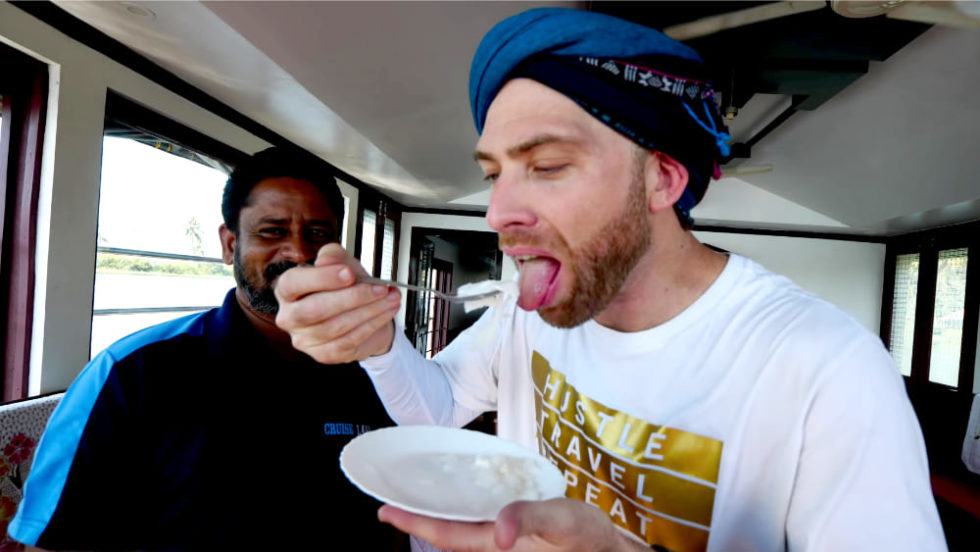 We had an hour before we’d arrive at the temple. Back in the kitchen, our chef was cooking up some fish fry. While I waited, I took over for the captain and drove the houseboat for a bit! I have my boating license, so it’s all good. We were cruising at about 25 knots! There were beautiful rice paddy fields and coconut trees around us. The brackish waters of the backwaters are full of animal life. 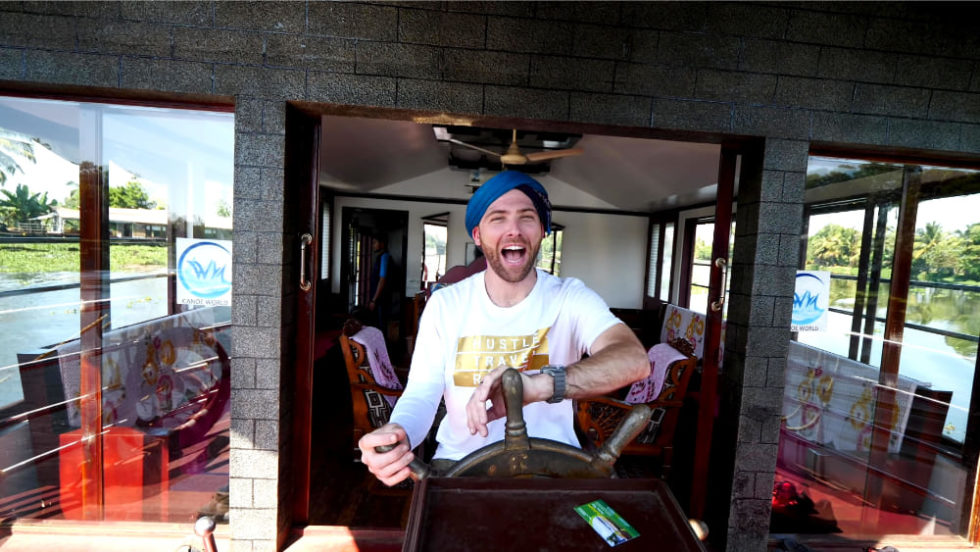 Then, it was time for our feast! Ebbin served me as I watched the beautiful scenery pass us by outside. The feast included rice, sambar, mixed vegetables, cabbage with coconut with green chilies, pachadi, chicken curry, long beans with carrots, lemon pickle, kingfish, papadum, salad with onions, cucumber, tomatoes, and more! It all smelled amazing! 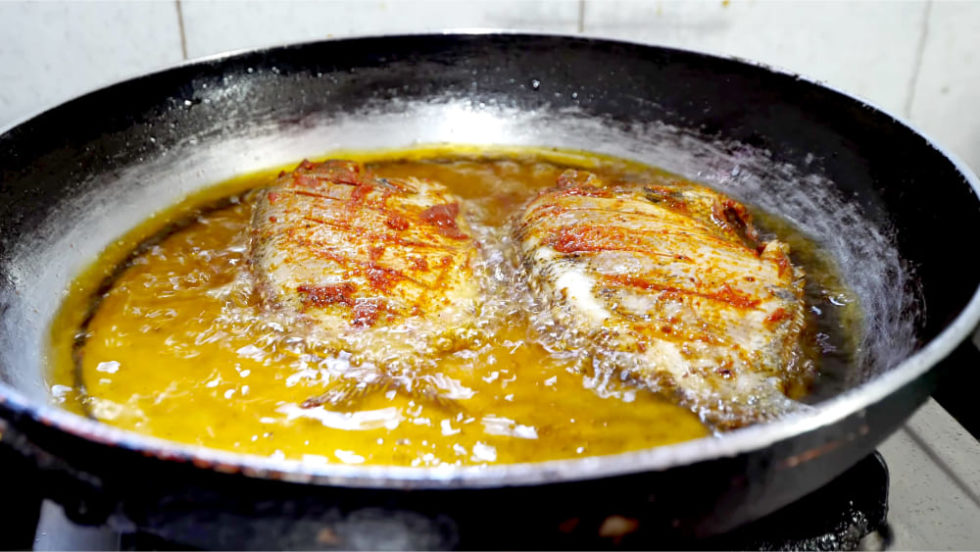 We started by mixing the sambar with the rice and vegetable curry and crunching the papadum over it. I like how it binds the rice together and adds a nice crunch. I loved the coconut oil in it. It binds all the flavors together! The curd was delicious, and there were coconut pieces throughout the dishes. The flavors were so light! There wasn’t too much spice and nothing was overbearing.

I really loved the long beans. You can’t beat the veg dishes in India! Next, I tried the cabbage with coconut and green chilies. It was finely grated and was really nice. It’s best to try it alone first to appreciate its unique flavors. Then, we went for some of the fish. I could see the tiny bones in it, so I had to be careful. It has a soft flesh, but in some seasons, it has a muddy taste. It was a very light freshwater fish and reminded me of flounder. 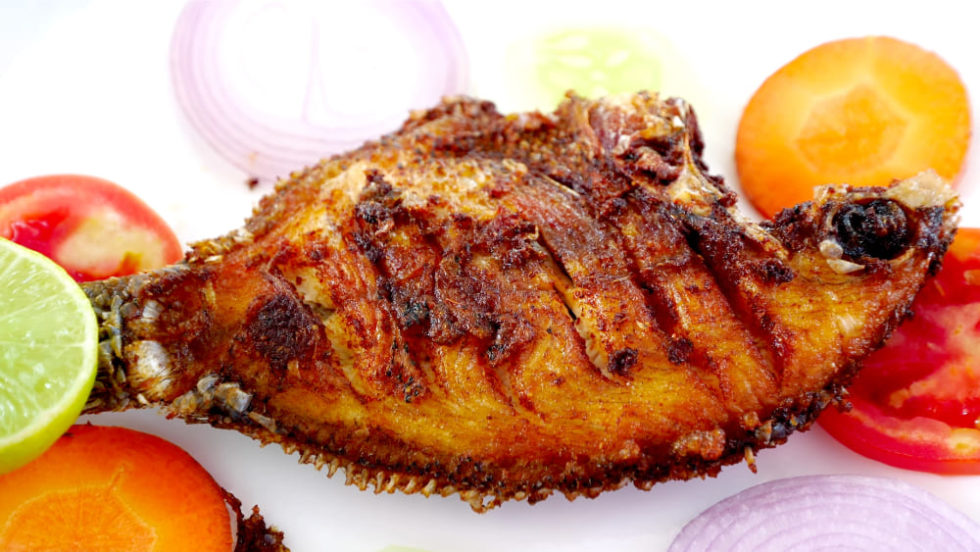 Then, I tried the chicken. I had to be careful of the bones in it, too. But it was so fresh and organic. Country chicken is the best! Then, I went with the sour pineapple pachadi, the lemon pickle, and the kingfish. Once the sambar was gone, I had some puliserry on my rice, which is made from yogurt. It also contained pineapple and was really nice. All of the flavors were starting to blend together at this point! 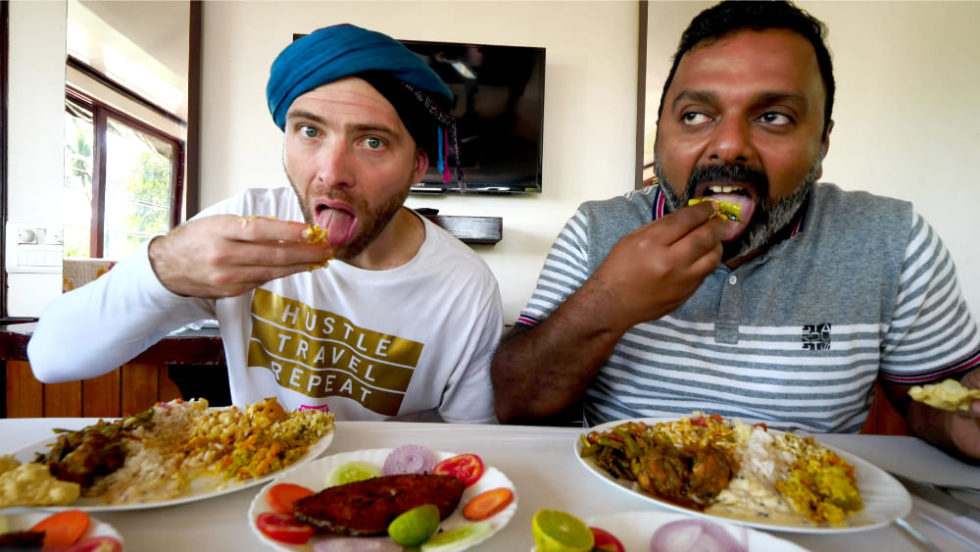 As we ate, we docked near the Buddhist temple Ebbin had mentioned earlier, Karumadikuttan Temple. We had limited time, so we left the houseboat and went to go explore it. I could tell it was Buddhist because of the white pagoda! There, you can see a Buddha from the 9th-14th century. It’s made from black granite and is cut in half! I had never seen anything like it!

It was so hot outside, so we headed back onto the boat for dessert, payasam! It’s like a super sweet porridge. It contained grains, vermicelli noodles, and a raisin. It was really good and was a nice way to combat the heat! 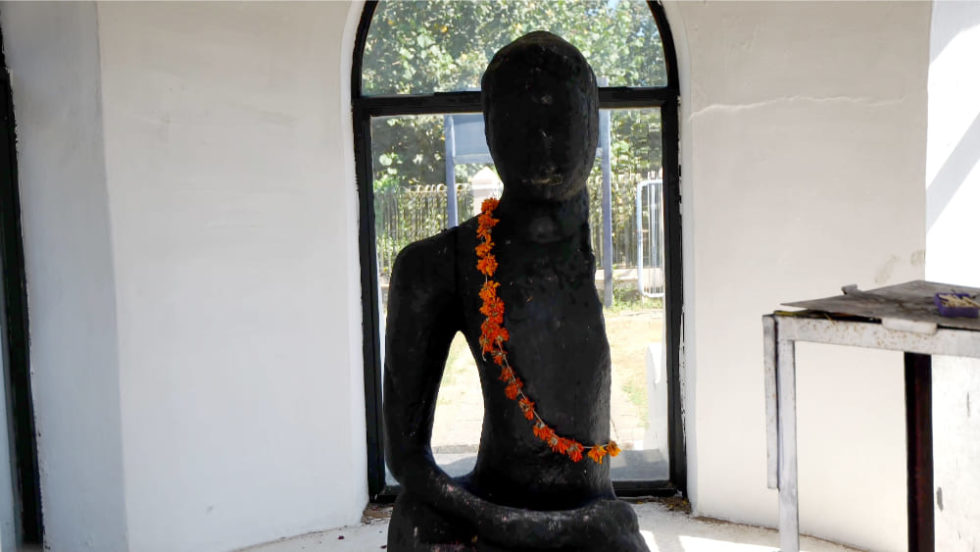 What an amazing South Indian seafood feast in the Kerala Backwaters and houseboat tour in Alappuzha, India! I highly recommend booking the Cruise Land Houseboat for your Kerala Backwaters experience. I have to thank my boy Ebbin for bringing me out here. This place is beautiful and is a must-see when you visit Kerala. Be sure to check out his Instagram and YouTube channel for more incredible Kerala food adventures! 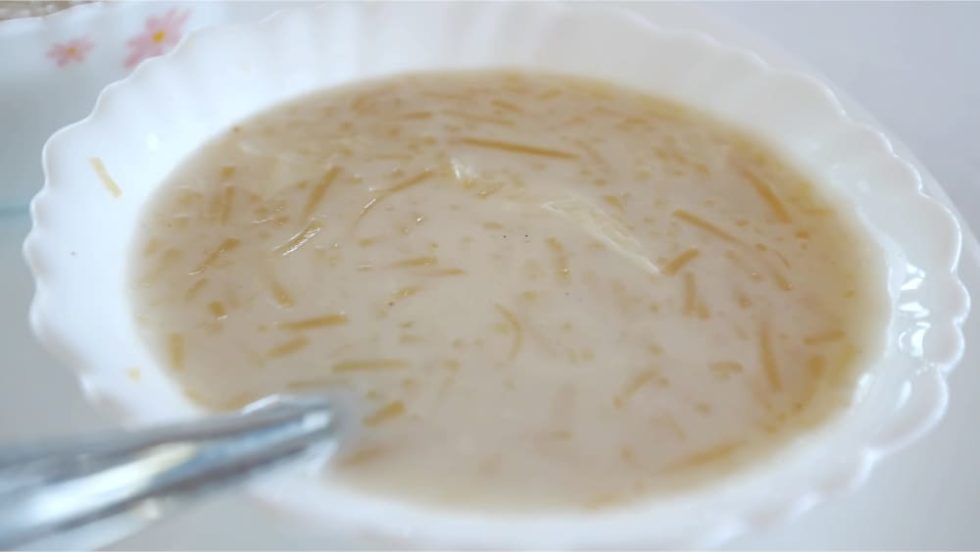 I hope you enjoyed coming along on my south Indian seafood feast in the Kerala backwaters and my houseboat tour in Alappuzha, India! If you did, please give this video a thumbs up and leave a comment below. Also, please subscribe to my YouTube channel and click the notification bell so you don’t miss any of my travel/food adventures around the world!