Located on the Adriatic Sea coast of Albania, just a 38-kilometer drive from the capital city, Tirana, is the port city of Durrës. A beautiful and ancient seaport, Durrës’ captivating history dates back to the 7th century BC. During that time, Hellenistic colonists from Corinth and Corfu founded the city—then called Epidamnos—on land claimed by the Illyrian Taulantii. Epidamnos, later called Dyracchium, became an important part of the Roman and Byzantine Empires. It connected the city with Constantinople via the Via Egnatia, just one of the many things to see and do in Durrës, Albania. 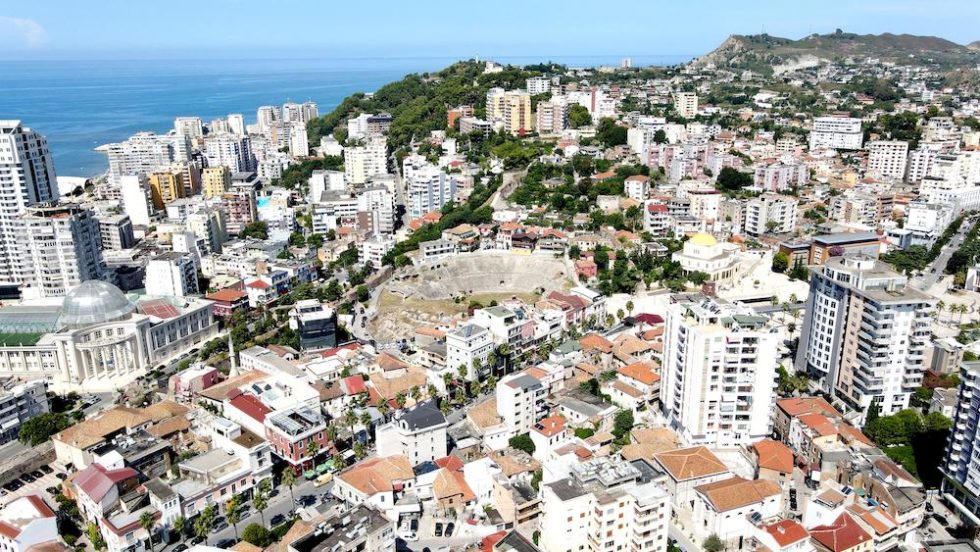 Durrës still boasts several reminders of its long history, which also includes time under Bulgarian, Venetian, and Ottoman rule. The city briefly served as the capital of the short-lived Principality of Albania from the end of the First Balkan War in 1913 until the Albanian Republic was established in 1925. The city also enjoyed a surge of growth during the Communist era from 1942 to 1992. 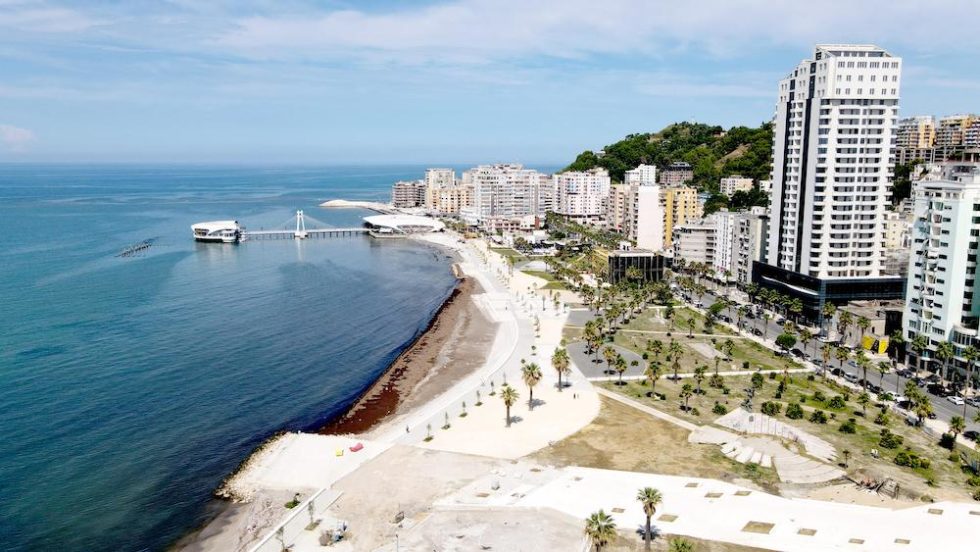 Today, Durrës is a sunny and mesmerizing seaside city that makes a fantastic day trip from Tirana. During my time in Albania’s second-largest city in August of 2020, I got to explore more of the country’s food and culture with my friend Ani from Balkan Pearls Tour Operator, thanks in part to the wonderful people at Rental Car Albania. 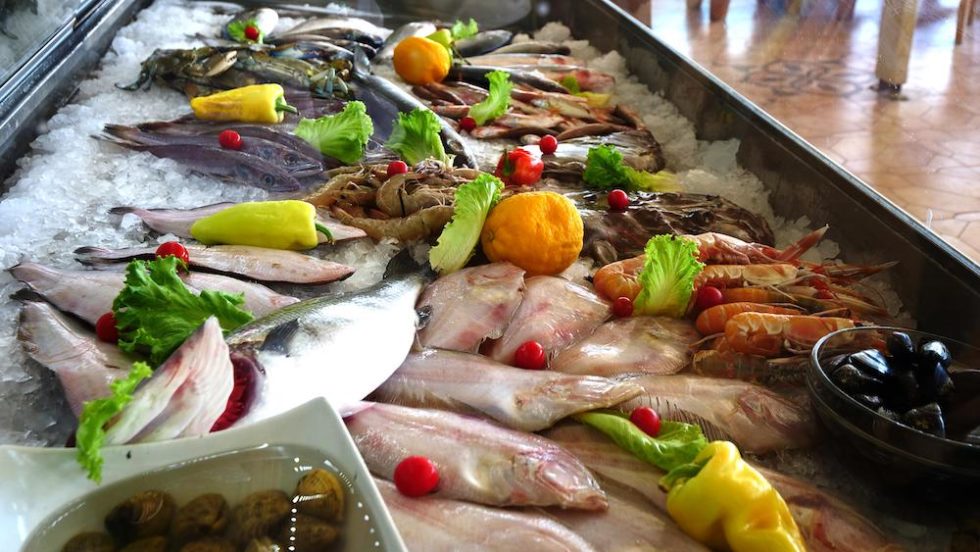 My inner history buff was also pleased, as several relics from Durrës’ past still stand alongside the city’s more modern buildings. And I haven’t even mentioned the incredible winery and resort in the area. Durrës is my kind of city, and I’m sure it will be yours, too. These are 5 things you must see and do in Durrës, Albania. 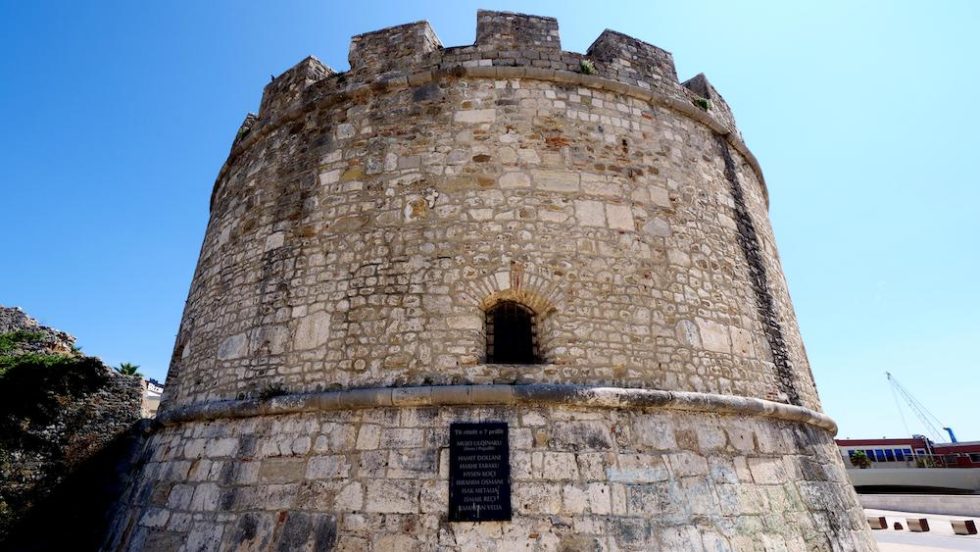 Albania is a country that is rich in stunning historical and archaeological sites. Some of its most important are located right in the middle of Durrës! Located along the street just minutes from the city’s port is the breathtaking Venetian Tower. The tower is actually part of the larger Fortress of Durrës, a fortification built during the Byzantine Empire. However, it’s known as the Venetian Tower because the Venetians reinforced it before the Ottoman conquest. 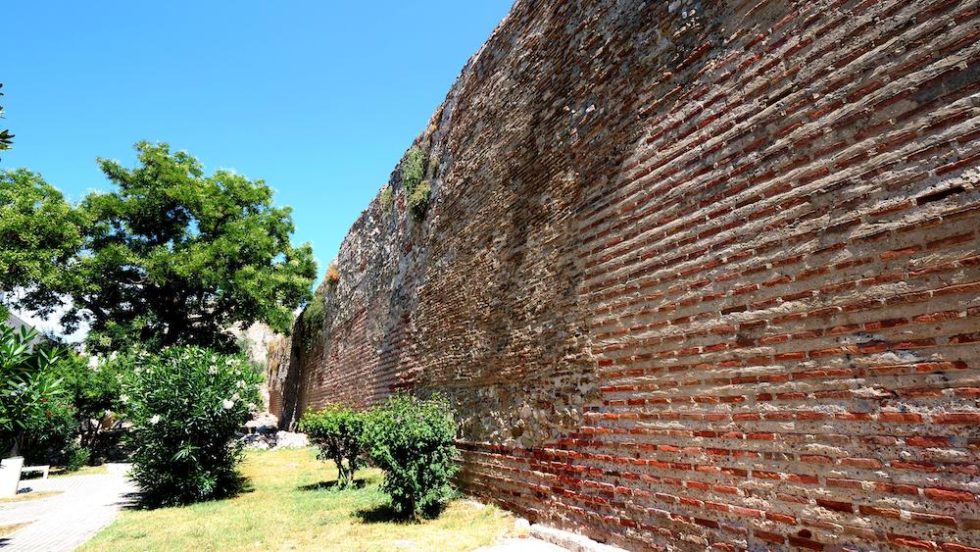 While much of the Fortress of Durrës is in ruin, pieces of its ancient walls still stand in this section of the city. These walls have been built, destroyed, and reconstructed many times in their history. During my visit, the walls were undergoing another restoration to repair damage following an earthquake that struck the city in November of 2019. 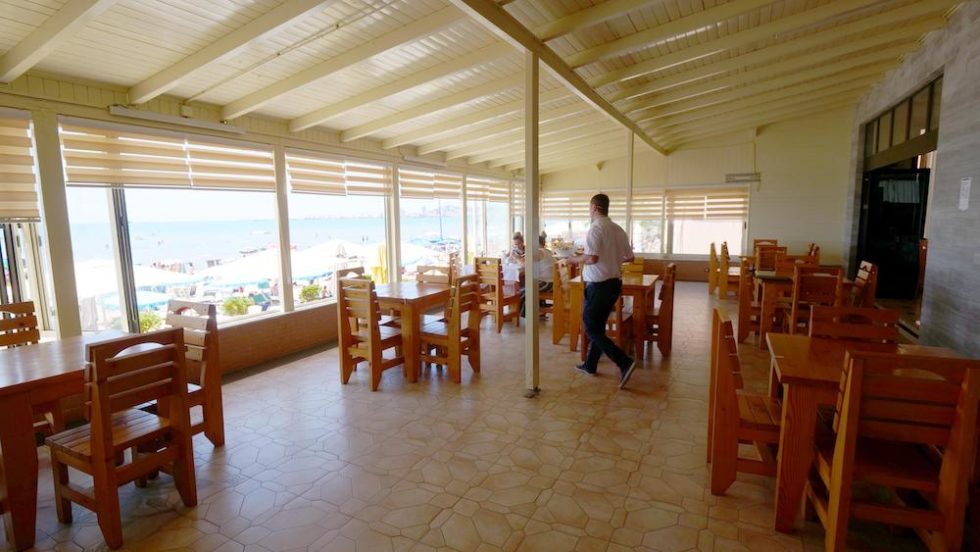 When you’re in a Mediterranean city, you would be remiss if you didn’t have some fresh seafood. Some of the tastiest seafood in town can be found at Bar Restorant Ferra Shijak on the boardwalk. 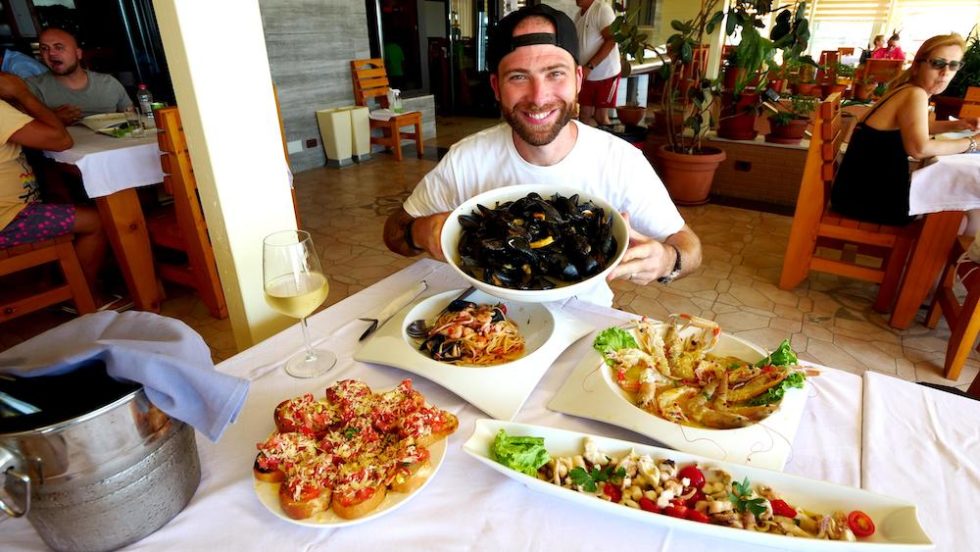 From the moment you enter, the aroma of fresh and cooking seafood teases your nostrils. You’ll find everything from shrimp to mussels to crab to several different types of fish on ice! And when you order, you really can’t go wrong. I recommend the seafood linguine, steamed mussels, crudo shrimp, crudo octopus, grilled and fried fish, and bruschetta. 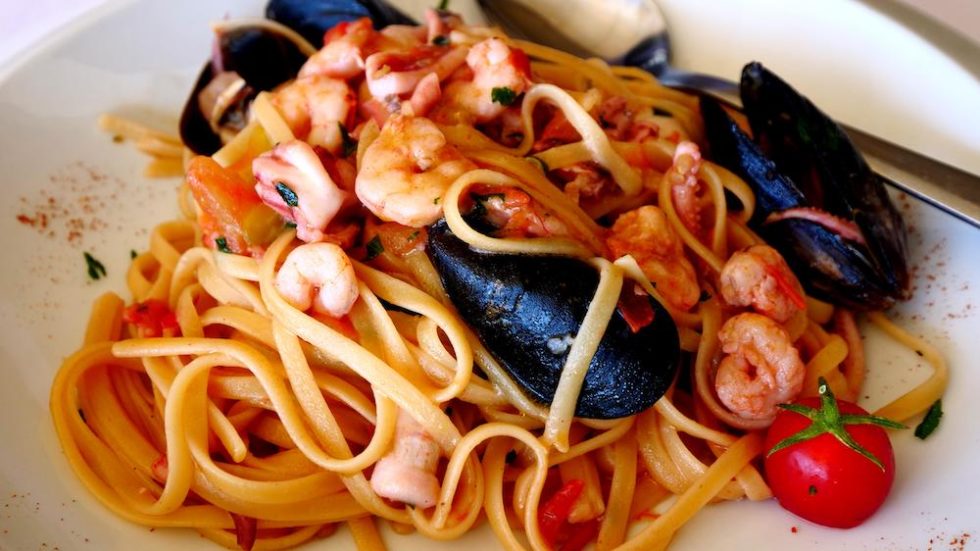 As someone with Italian heritage who has visited Italy countless times in my life, I don’t say this lightly. The seafood linguine is some of the best I have ever eaten. It’s loaded with fresh squid, shrimp, and mussels, which are coated in a creamy and tangy sauce. 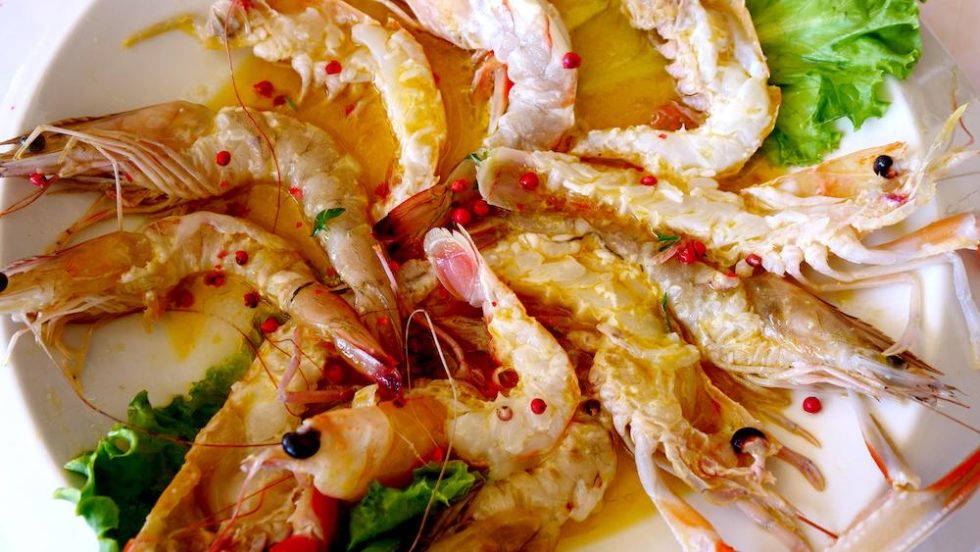 I also highly recommend trying the crudo. I’ve always been an adventurous eater, so raw fish is no biggie for me. Even if you’ve never had it before, I suggest giving it a try. The raw shrimp and octopus chunks are marinated in a simple lemon and oil dressing that is basic yet explosive in flavor. I couldn’t get enough of the way the citrusy marinade coated my tongue, letting the succulent meat slip effortlessly down my throat. It is downright orgasmic! 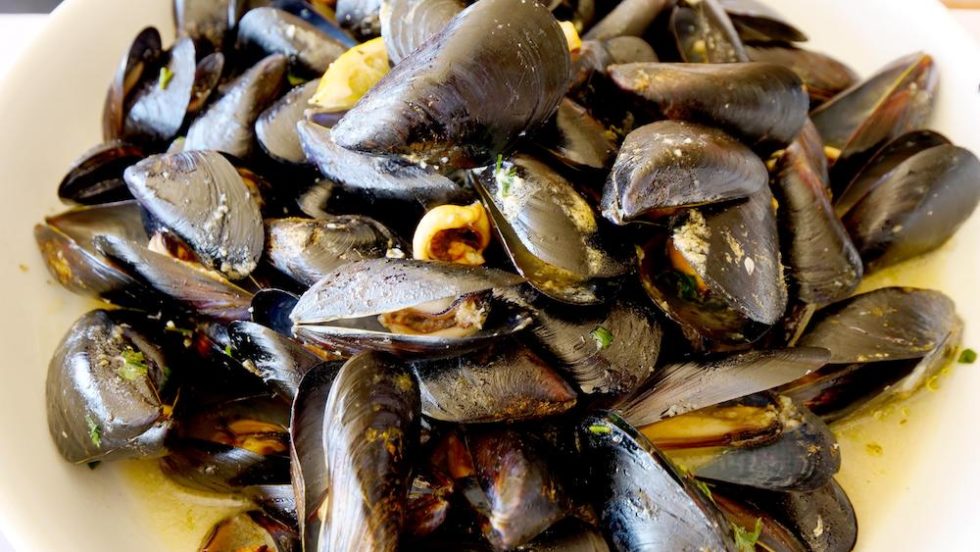 You must also try the meaty baked fish and the crispy fried fish—just be careful of the bones, as there are many of them. But the other dish I must recommend is the steamed mussels. For just 400 lekes, or roughly $4 USD, you can get a massive plate of these mouthwatering morsels. I downed about twenty of them in a row. They’re absolutely addicting, especially when you try them with the briny broth at the bottom of the platter. There’s a reason why eating here is one of the best things you can see and do in Durrës, Albania! It’s outstanding!

Explore the Amphitheatre of Durrës 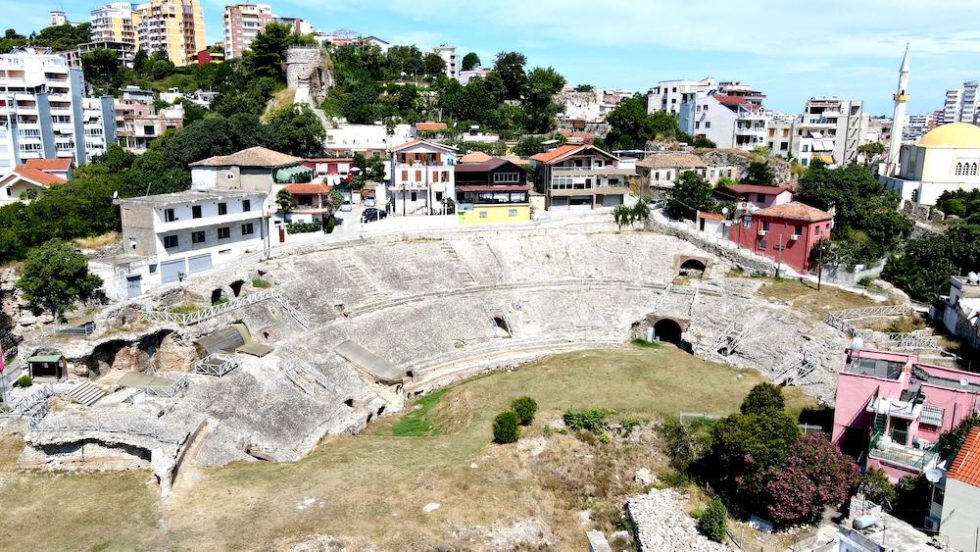 As you explore the remains of the Fortress of Durrës’ walls, you’ll come across an archway that leads to a site adjacent to the city’s port. This grand but weathered site is the magnificent Amphitheatre of Durrës, arguably one of the most notable archaeological sites in the Balkan region. The amphitheatre stands alongside modern homes and buildings, but it dates back to the second century AD, when it was built by Emperor Trajan. However, the amphitheatre wasn’t unearthed until 1966! 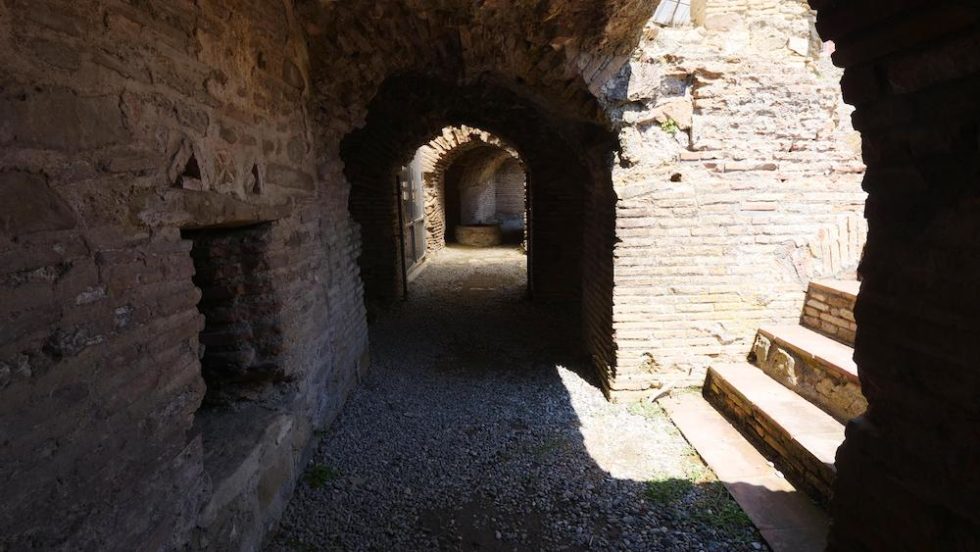 The amphitheatre features worn, stone stands that encircle a round, grassy area. Below ground are some of the original stairs and some low-slung, interconnected hallways. There is also a wide tunnel with high ceilings, which was used as an entrance by the emperor, who would arrive at the the amphitheatre via his chariot. 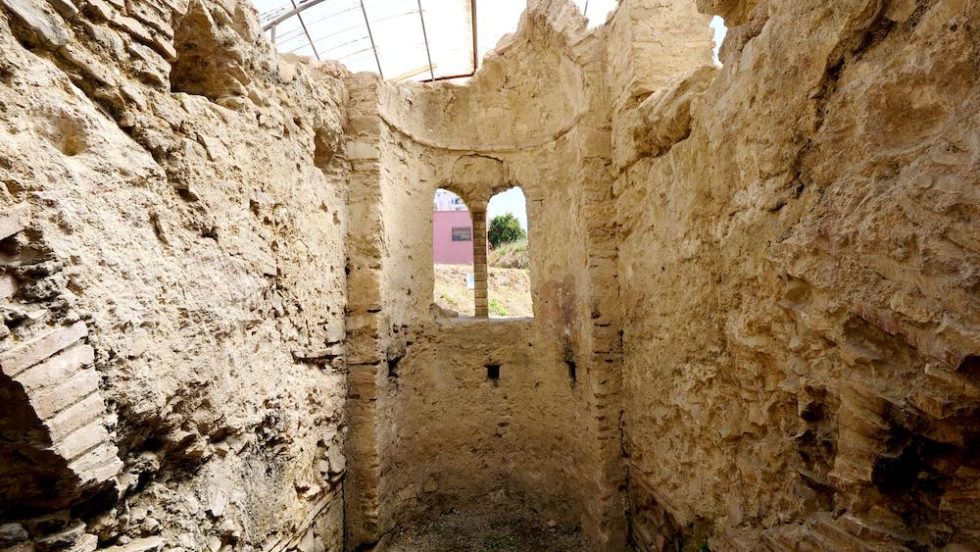 I’ve visited amphitheatres throughout the world, but I was struck by this one’s unique history. In the 5th century, the emperor at the time shut down the gladiatorial fights held there and converted the amphitheatre into a church. The graves of members of the church are located in the central grassy area 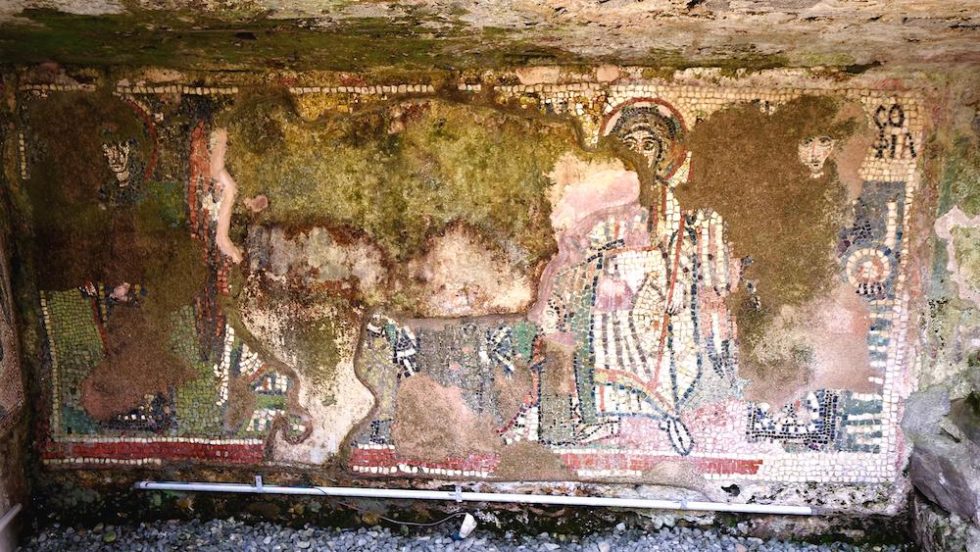 When you explore the tunnels below the stands, you’ll find the remains of a chapel and a well. You’ll also see some beautiful mosaics. I suggest exploring the tunnels and then climbing up to the street above the amphitheatre to get the best views. As you explore, you’ll notice areas that have clearly been restored, but I preferred the worn, weathered look of the original stone. It gave me a better sense of its history, making it one of my favorite things you must see and do in Durrës, Albania! 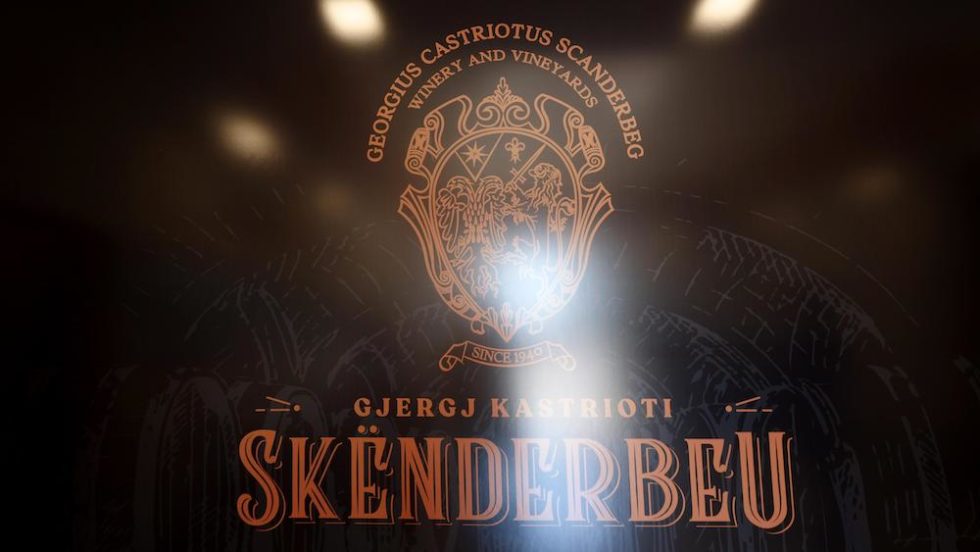 When I travel, it’s always important for me to immerse myself in the local culture. That means eating local dishes, learning the local customs, and indulging in their alcoholic beverages. As a longtime wine lover, I was excited to learn that the Albanian tradition of wine-making is on full display at Gjergj Kastrioti Skënderbëu Winery, also known as Kantina Skënderbëu Winery. 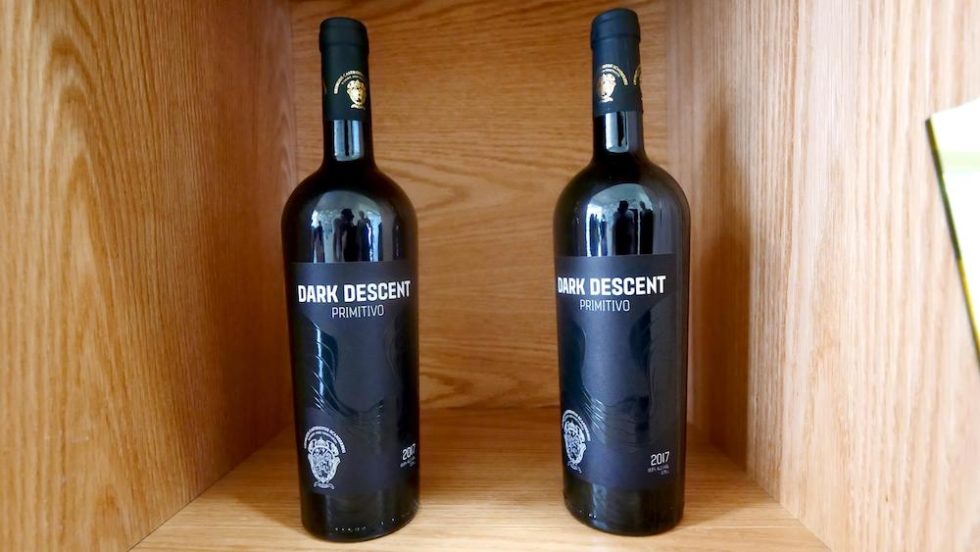 This facility is the largest and oldest winery in Albania and features an expansive property that produces wine from both native and international grapes. The winery, which was privatized in 2001, is a multiple award-winner and also makes a number of types of brandy. They also produce raki, or rakija, which is a special type of fruit brandy that is popular throughout the Balkans and has many different varieties. 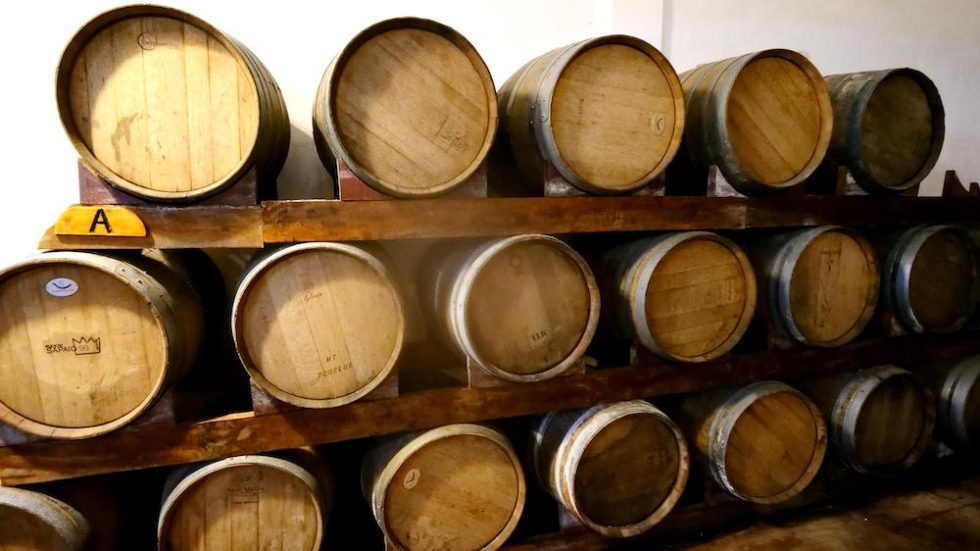 Inside the winery’s basement, you can try some of their five-year-old brandy poured from taps in the walls. It’s nice and smooth and is aged in different oak barrels depending on the flavors and aroma they want. Touring the winery is certainly among the things you must see and do in Durrës, Albania, but the experience doesn’t end there! 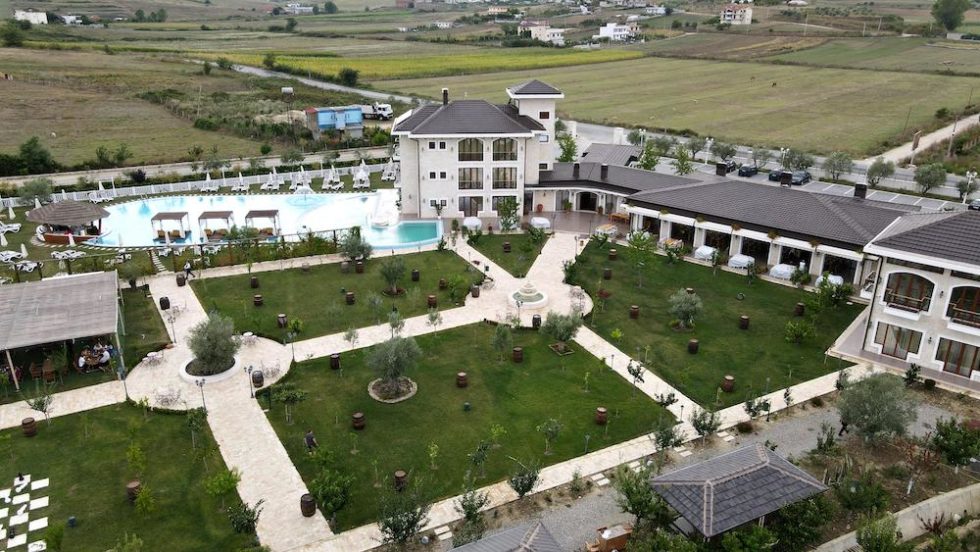 To have a complete Kantina Skënderbëu Winery experience in Durrës, you must take the time to visit their nearby resort, Vinea Resort & SPA. As much as I enjoyed the winery, the resort is the real experience. It’s downright massive and boasts an attractive main building and a stunning pool with a modern cabana area. And even though it’s owned by a winery, it’s family-friendly. 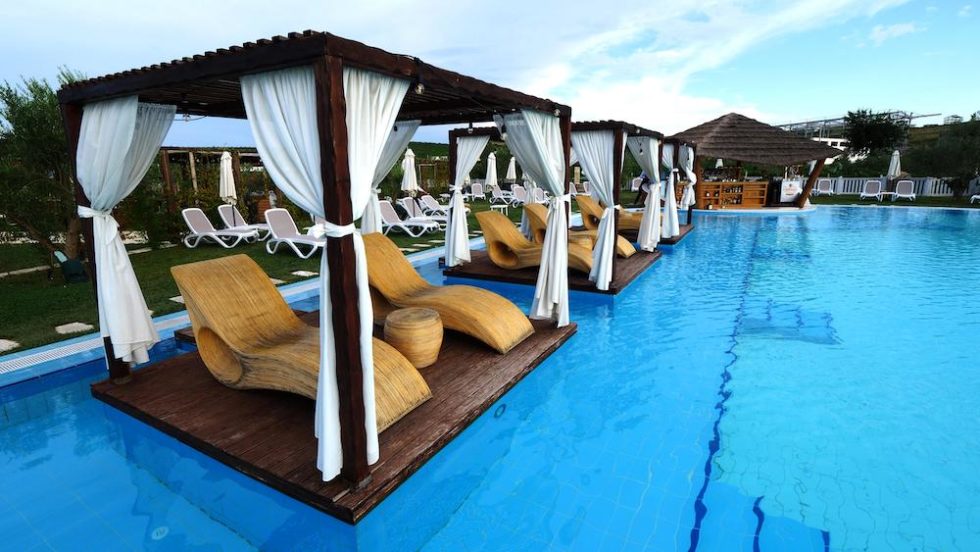 Taking a tour of the resort is a must. Like most places I visited in Albania, they grow their own produce. Everything you eat there is farm-to-table and as fresh as can be. As you explore the grounds, sample some of their sweet figs. 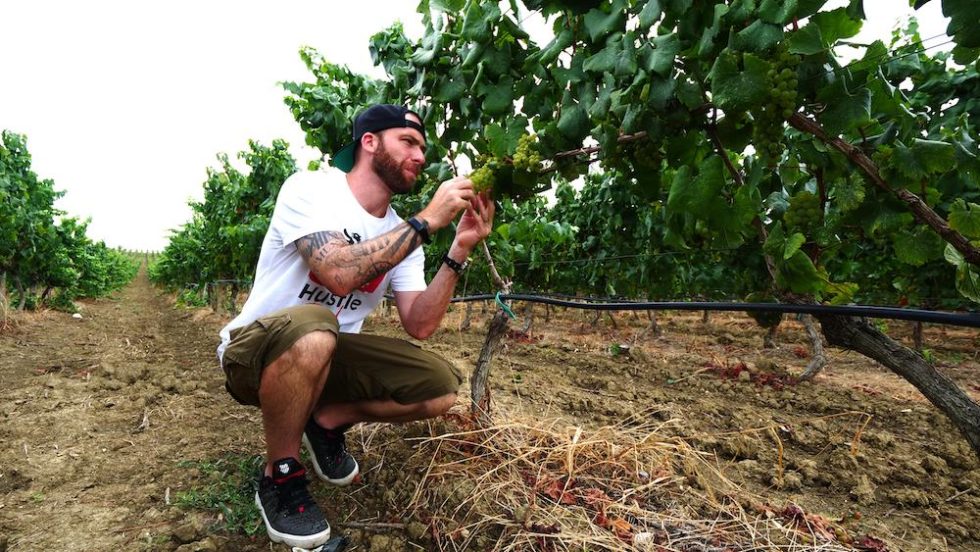 Don’t be shy about trying the different varieties of grapes growing in their 45-hectare vineyard! I recommend the yellow chardonnay grapes and the reddish Negromaro, which they use to make a wonderful rosé. 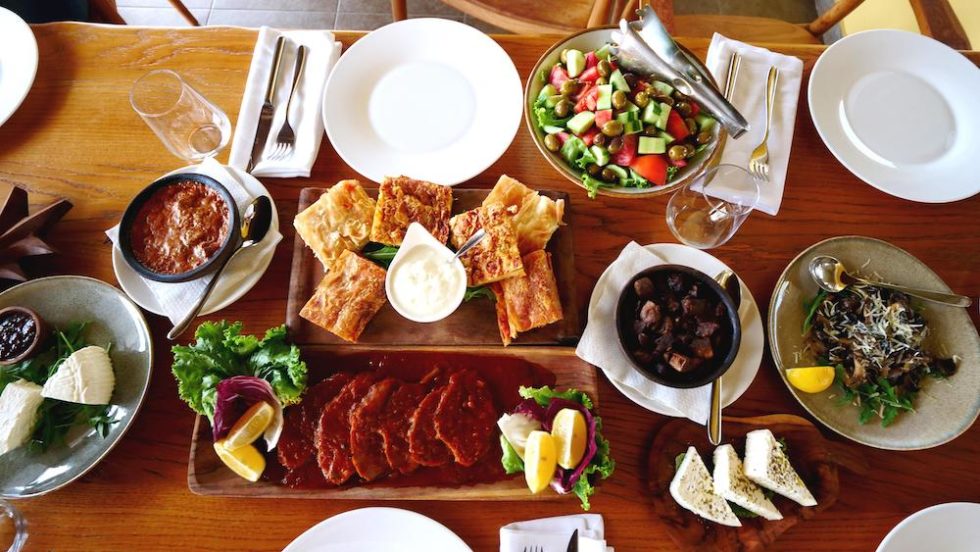 You can, of course, enjoy dinner and a wine tasting there. While their beef sausage, veal fërgesë, liver-and-kidney tava, and veal with tomato sauce were unbelievable, the real treat is the wine. I recommend their dark, full-bodied primitivo and the earthy shesh i zi. 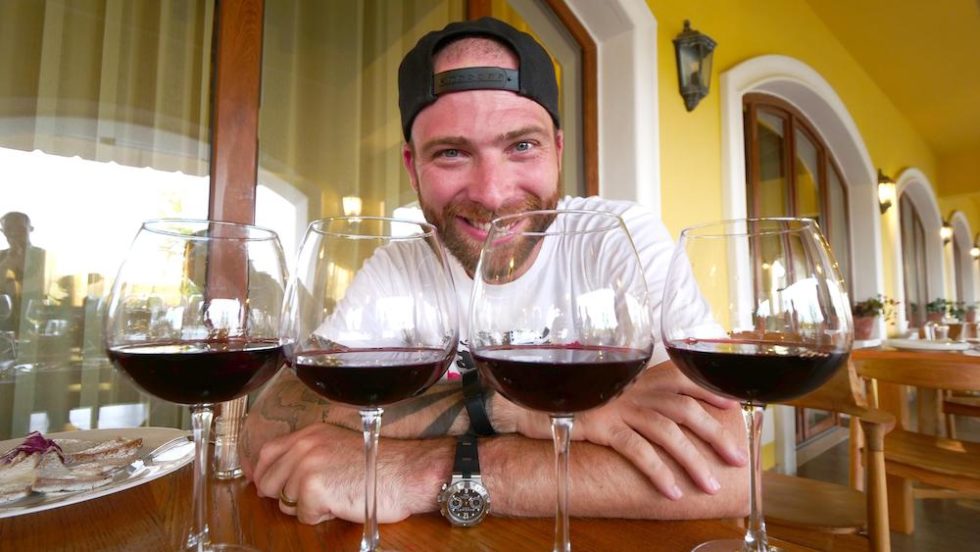 They also have a dry and fruity rose and a velvety five-year-old premium brandy. I also recommend the muscat grape rakija, which is light, sweet, and the perfect way to end a meal! Trying it is definitely one of the top things to see and do in Durrës, Albania! 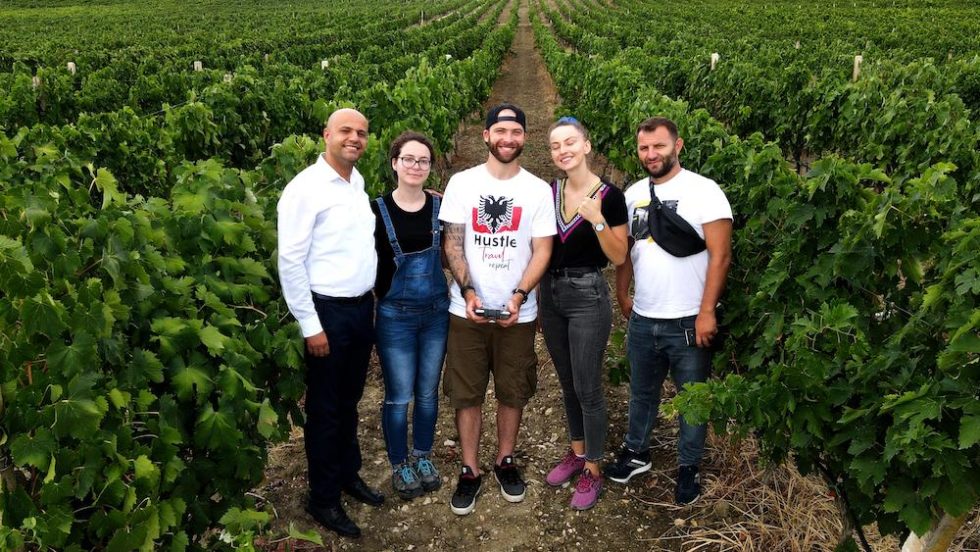 I spent less than a day in Durrës, but the memories I made there will last me a lifetime. Whether I was toasting with the employees at the winery or joking in Italian with the cooks at the restaurant, there was one constant: I felt like I was home. The people of Durrës made me feel like I was family right away. It lasted from the moment I arrived to the second I left. It’s just another reason why I fell head-over-heels for Albania during my two-week adventure there. The people make the place, and for me, they made it one I can’t wait to visit again. Book a trip to Albania today to experience the amazing people and hospitality of Durrës today!