Nestled in the picturesque Vjosë River Valley in southeastern Albania is the town of Përmet. This town of just over 10,000 residents is an absolute must for culture seekers traveling through Albania. It also offers quite a bit for foodies and those with more adventurous tastes. In fact, several of the top things to see and do in Përmet are among my favorites in all of Albania! 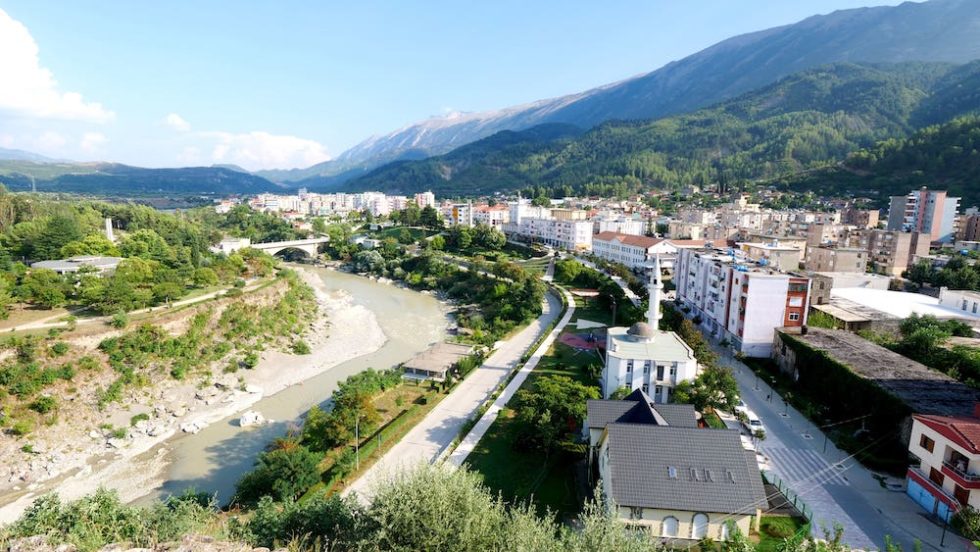 Early in Përmet’s history, it went by the name Tryfilia. Its current name comes from a legendary Albanian hero named Premt. According to stories passed down from generation to generation, Premt chose to take his own life rather than lose it at the hands of an enemy he faced. 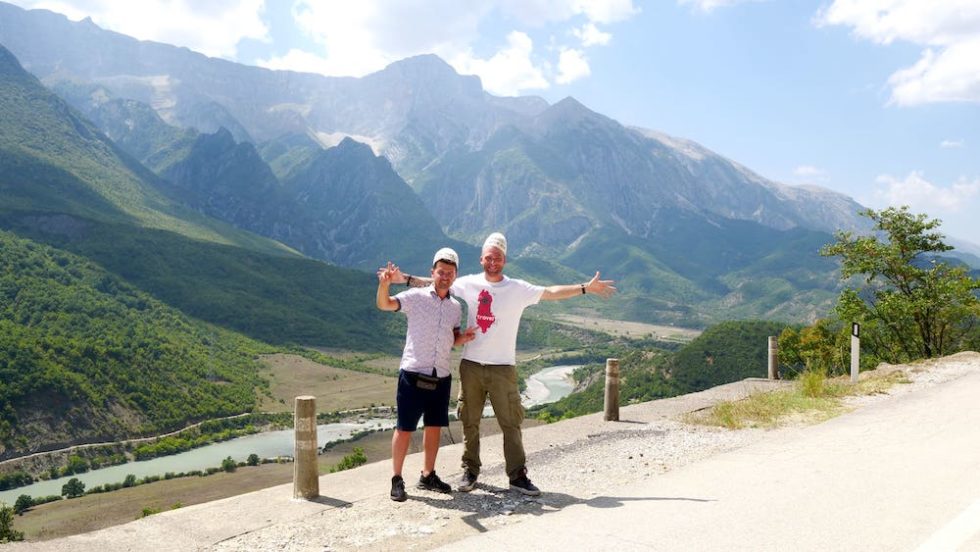 In the 15th century, Përmet came under Ottoman rule following their conquest of Albania late in the 14th century. In the centuries that followed, the Ottomans worked to convert the country to Islam through policies, trade networks, and tax incentives. However, Christian areas of the country, including Përmet, resisted the conversion. Later, in the 20th century, the town played important roles in the First Balkan War, the Greco-Italian War, and World War II. During the Communist era that followed, Përmet became known as “The Hero City.” 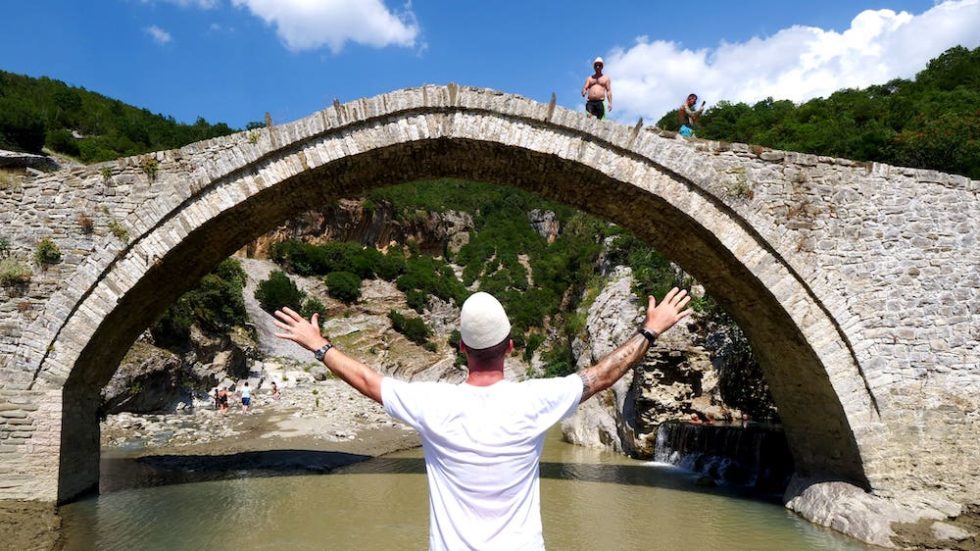 Today, modern-day Përmet is sometimes referred to as “The City of Roses.” The nickname comes from the many roses that grow in the town. It’s also known as Albania’s greenest and cleanest town, and has a reputation for producing popular clarinetists. Përmet has a long tradition of making wine and raki, a fruit brandy that’s popular in the Balkans. Gastronomy-wise, it’s also well-known for its fruit preserves, including a unique, sugary creation called gliko.

Things to Do in Modern-Day Përmet, Albania 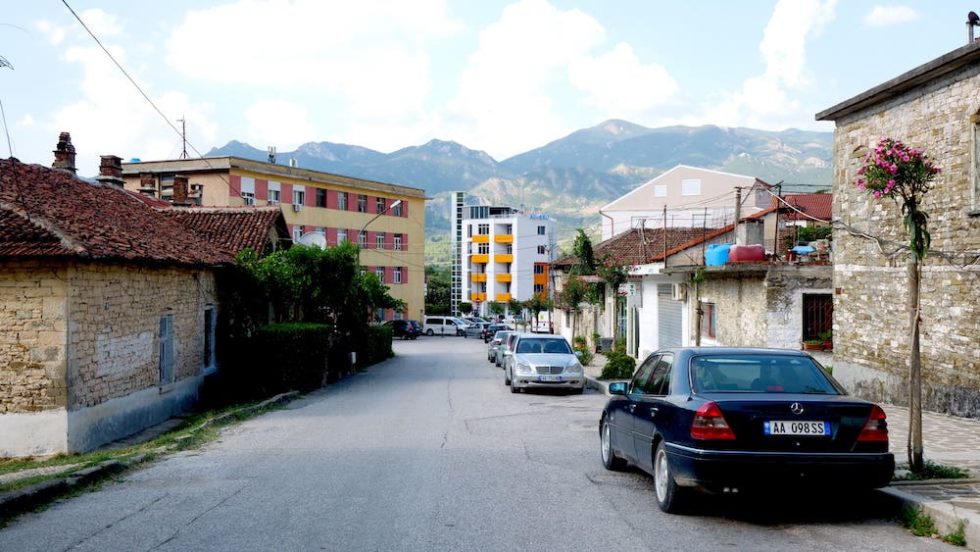 The day I spent exploring Përmet with my friend Erjan from Travel Media EU is one I will never forget. During my time there, I visited magnificent historical sites and one-of-a-kind attractions. I also met some kind and remarkable people, who made my experience in town one for the books. I can’t understate the charm and hospitality of the Albanian people. They truly made me feel welcomed and special and I can’t thank them enough. These are the top 5 things to see and do in Përmet, Albania. 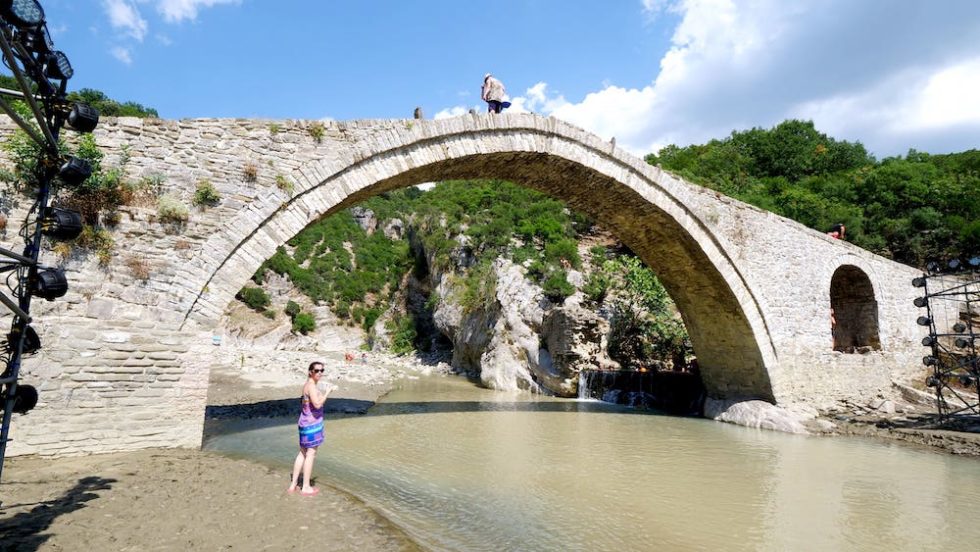 While most travelers come to Përmet for its famous thermal baths, my main reason for visiting was Katiu Bridge. This stone bridge, located about 8 kilometers from Përmet, was built by the Ottomans in the 19th century. It’s also known as the Ali Pasha Ottoman Bridge, after the famous Albanian leader who commissioned it. 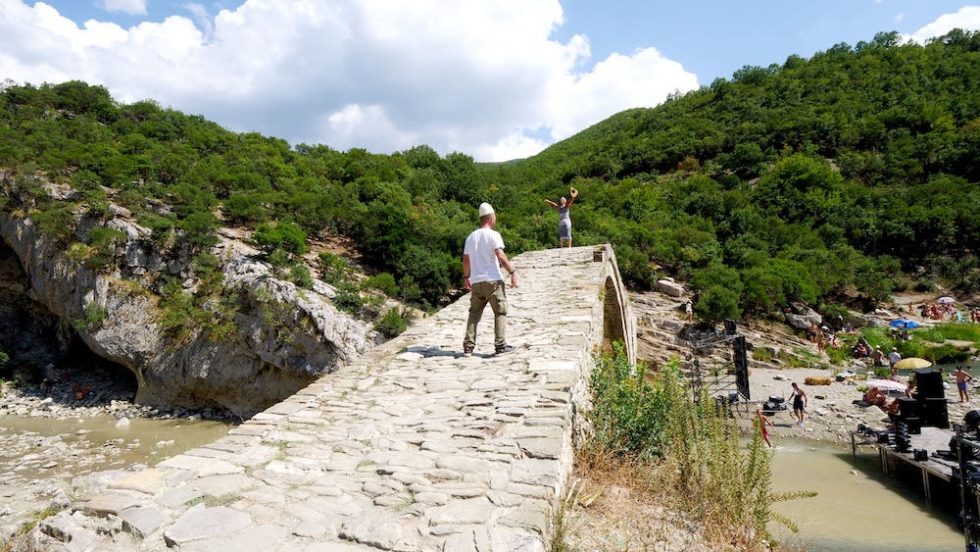 This gorgeous relic of the Ottoman Empire straddles the beautiful Lengarica River in the Fir of Hotova National Park. As far as Ottoman bridges go, it’s on the smaller side and consists of one large arch that spans the Lengarica Gorge. But even though it’s small, doesn’t mean it isn’t spectacular. 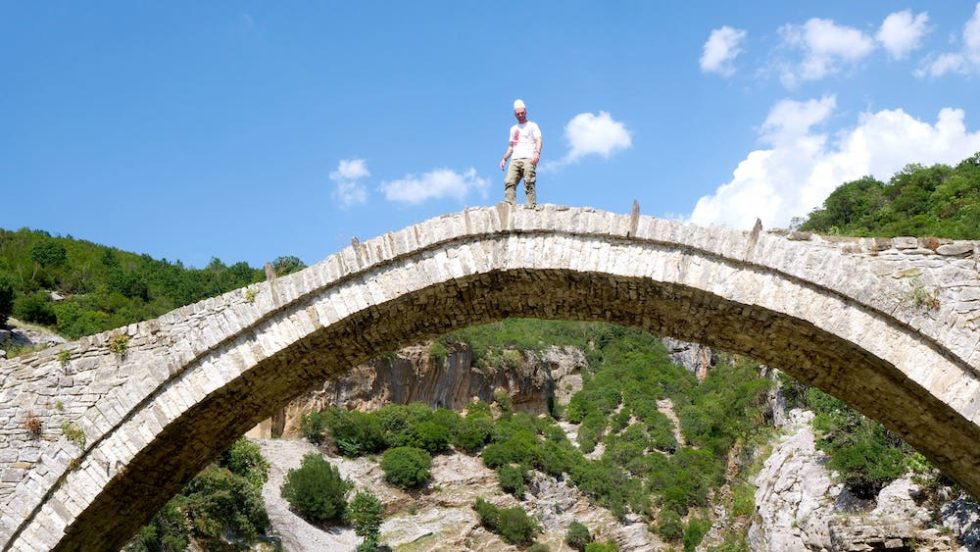 The bridge is an absolute beauty. It’s one of roughly two dozen Ottoman bridges in the country. I recommend climbing up to the bridge, where you’ll get fantastic views of the river, surrounding gorge, and the Benja Thermal Baths below. Just be careful, as the stone can be slippery! 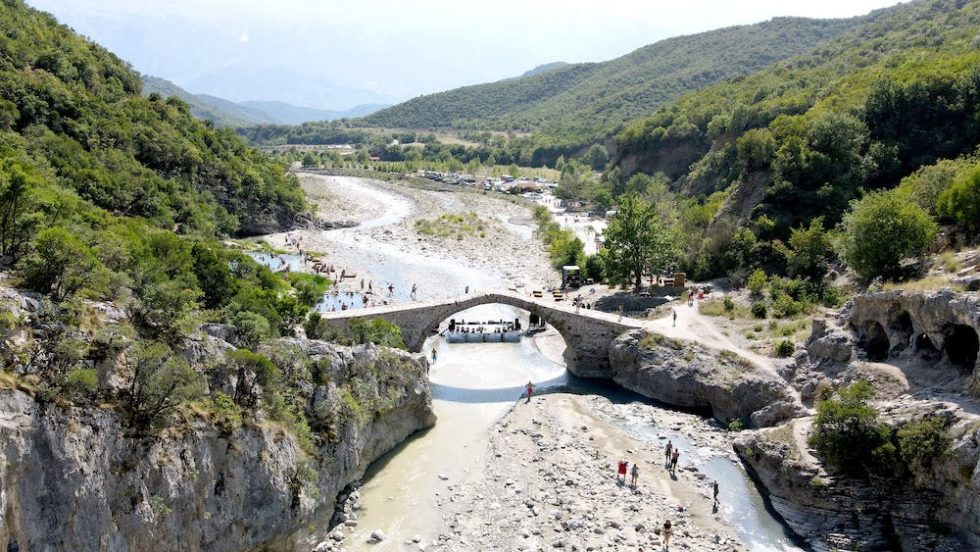 Without a doubt, the Katiu Bridge is one of the top things to see and do in Përmet. It’s the main reason why the day I visited was the day I was most looking forward to during my trip, and it did not disappoint!

Check out the 5 Things You Must Do in Berat, Albania

Take a Dip in the Benja Thermal Baths 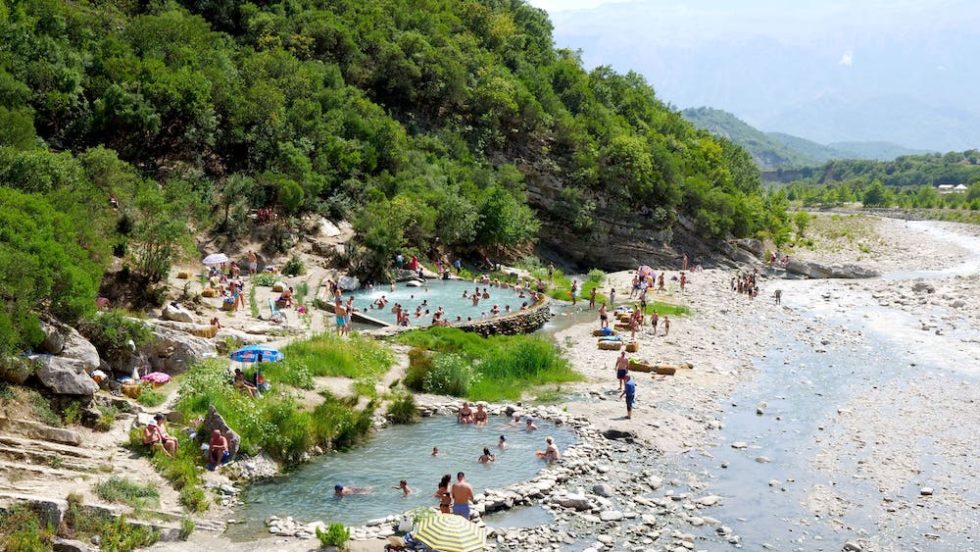 In the shadow of Katiu Bridge is yet another popular attraction in Lengarica Gorge, the famous Benja Thermal Baths. These unique, natural baths are fed by the Lengarica River and are said to have special therapeutic benefits. There are three baths in total, and each is said to benefit a different part of your body! 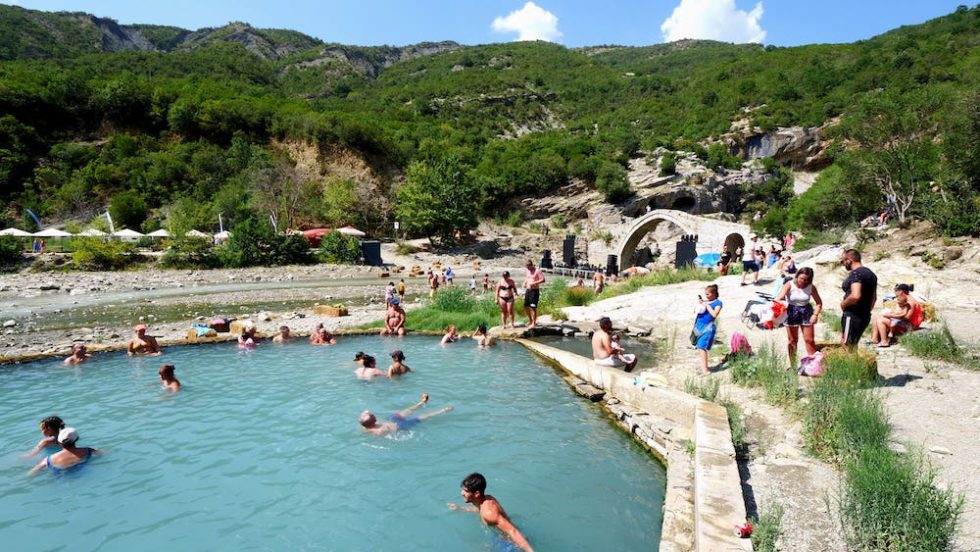 One of the three baths purports skin-healing properties. The second has a reputation for healing bathers’ kidneys, while the third heals their hearts! Lots of people in the country swear by them! 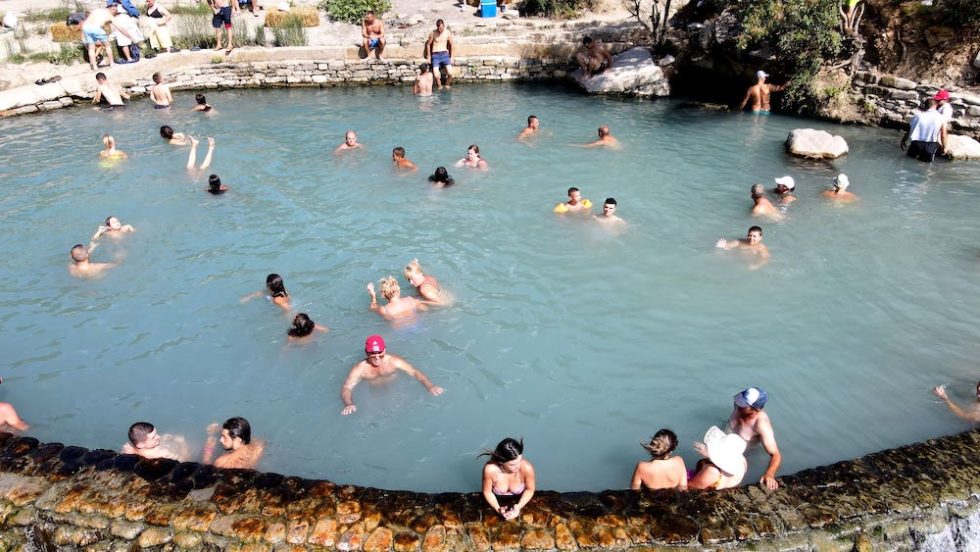 It should come as no surprise that these baths are extremely popular, especially during the summer. The area was packed the day I visited, and nearly everyone was there to experience the baths. The baths have a sulfuric scent to them and are unique in that they are cool during the summer and hot in the winter. 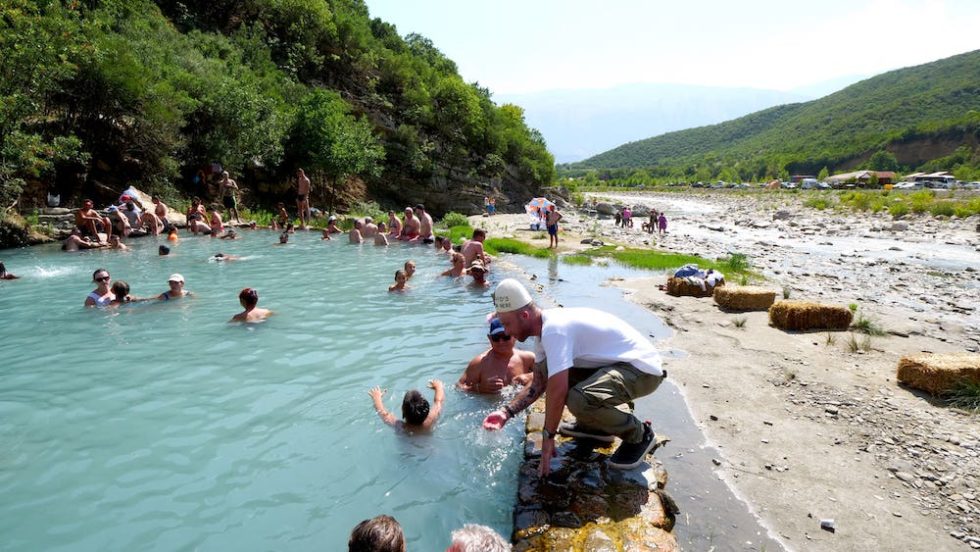 While I didn’t get to sink into any of the baths myself (I forgot my bathing suit), I did splash some of the skin-curing water on my face to get a small taste. It was pretty refreshing! The Benja Thermal Baths are definitely one of the coolest things to see and do in Përmet, Albania.

Check out the 5 Things You Must See and Do in Durrës, Albania 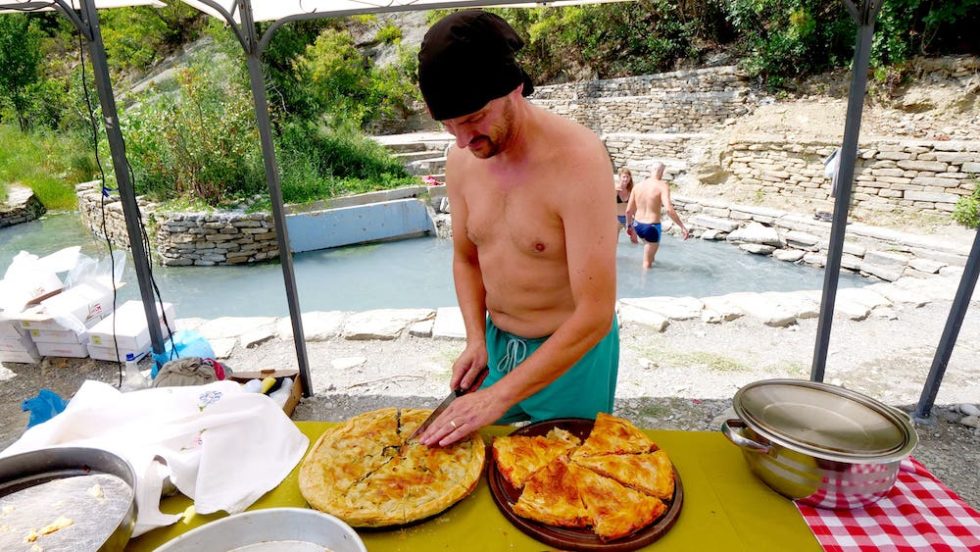 While you’re exploring Katiu Bridge and the Benja Thermal Baths, be sure to show some love to the vendors set up on the banks of the river. There, you may meet several friendly Albanian men who sell Balkan street food! 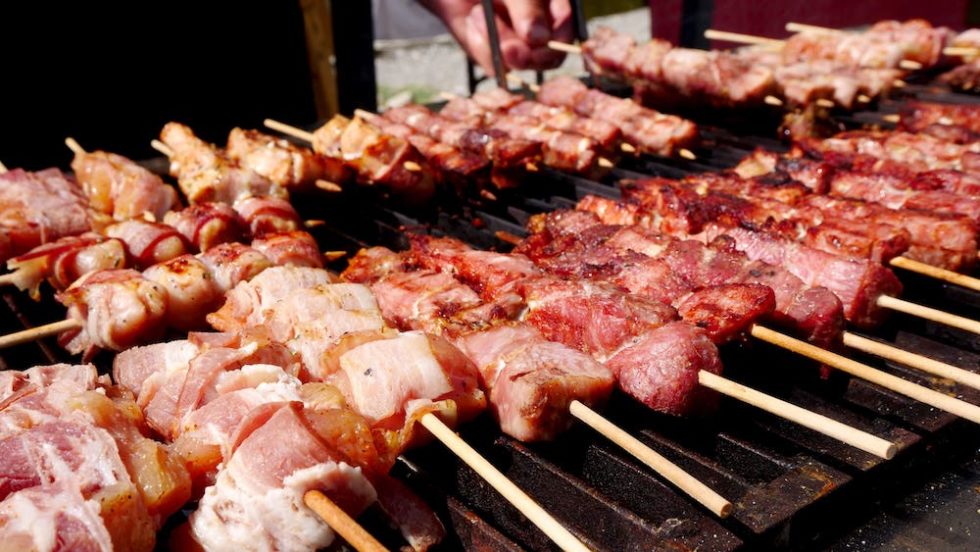 Give their byrek (a popular Balkan pastry), goat meat, and kebabs a try. They also sell wine, marmalade, and raki with honey! But of them all, I recommend the gliko. Gliko is a type of fruit preserve that contains whole fruit and/or nuts preserved in a sugary syrup. 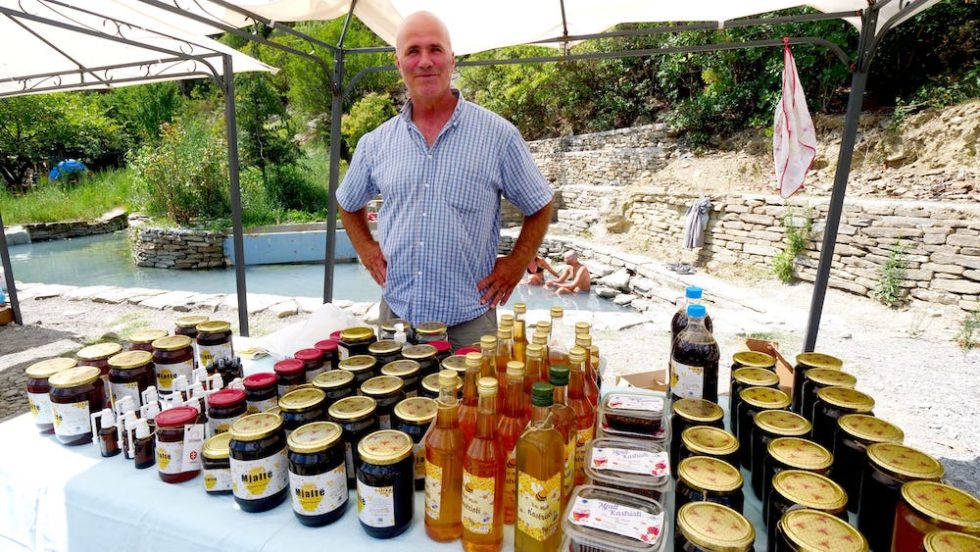 The man offered several different types of gliko, including watermelon, walnut, fig, and orange. It takes him thirty days to make the gliko, which he jars and sells for 250 lekes/$2.41 USD each. After I filmed his stand, he insisted on giving me a jar for free! 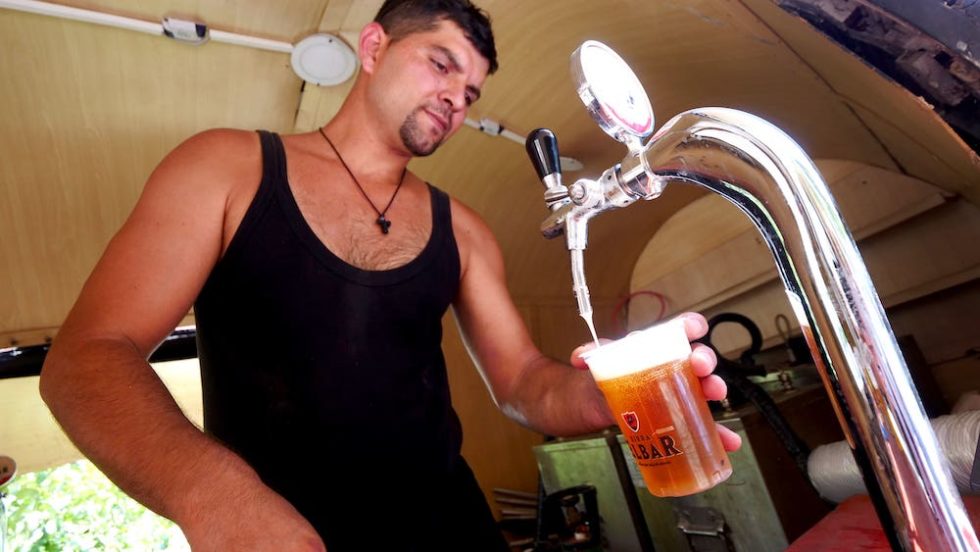 Also in the area, I highly recommend heading over to the Birra Elbar for some Albanian beer. This European pale lager comes from Gjirokastër County and contains only 4.1% alcohol by volume. It’s sweet and malty, with notes of licorice and sour hops. If you’re a beer fan like me, check it out!

Check out the Things to See and Do in Krujë, Albania

Eat Gliko at Shtëpia me Mozaik 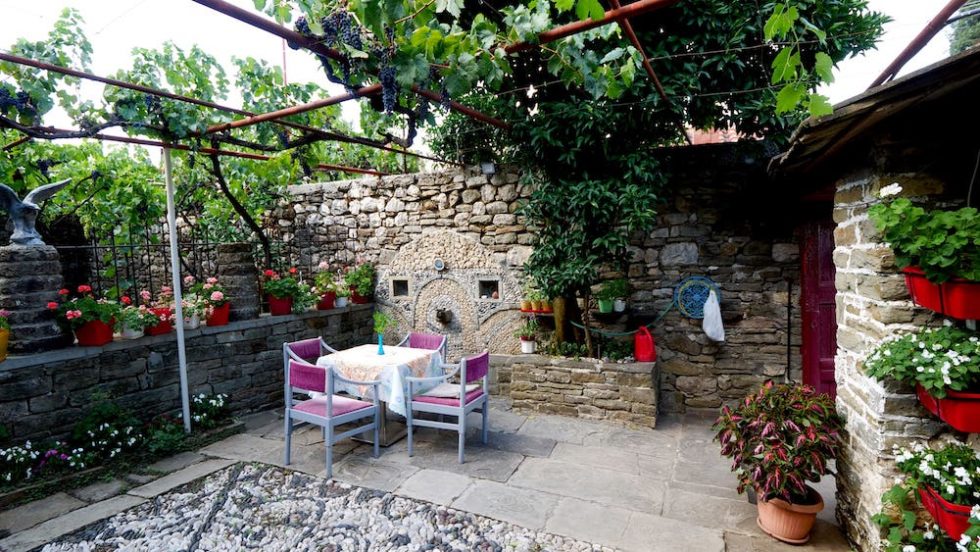 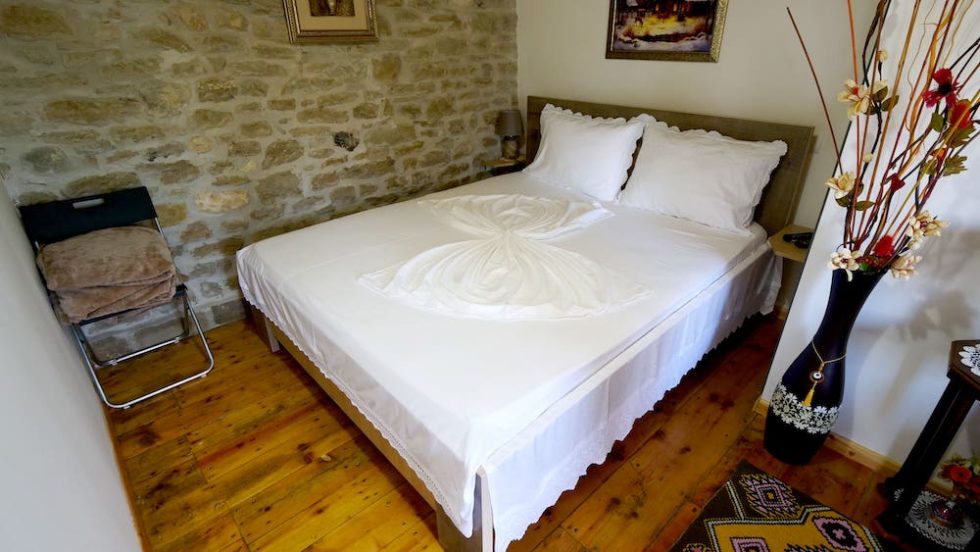 Shtëpia me Mozaik is a beautiful, 100-year-old guesthouse in the city. They have two rooms in which you can stay, one upstairs and one downstairs. Both rooms offer a queen-sized bed, a twin bed, a TV, and a clean, modern bathroom.

Downstairs, in their yard, you’ll find a rock mosaic from 1908 and a garden with vines growing overhead. It’s an incredibly beautiful and tranquil spot to relax and immerse yourself in Albanian culture! 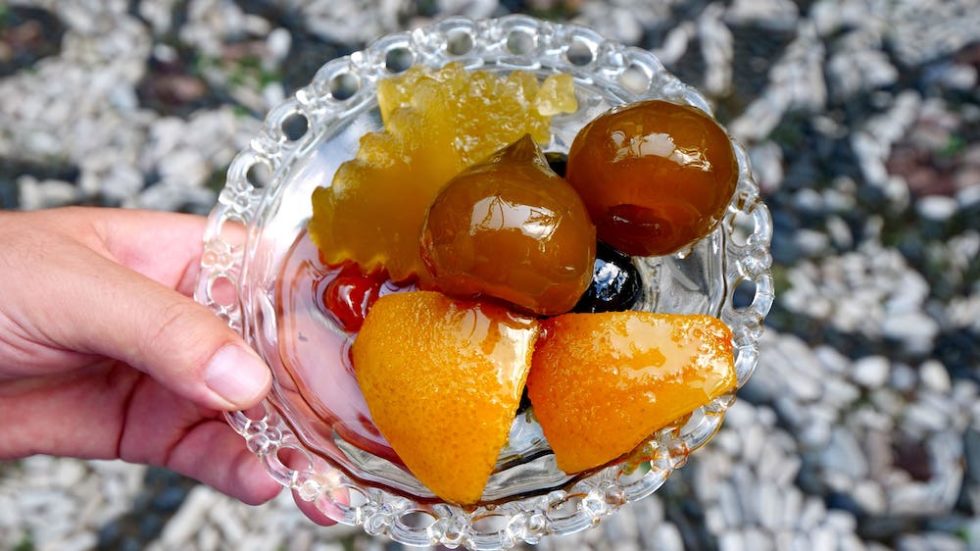 A sweet, older family who make gliko and rakija run the guesthouse! I was able to speak and joke with them in Italian as they served me nut, cherry, watermelon, orange, and fig gliko. Every time Erjan and I took a bite of gliko, they told us to chase it with some of their incredibly strong rakija. It was the perfect combination! 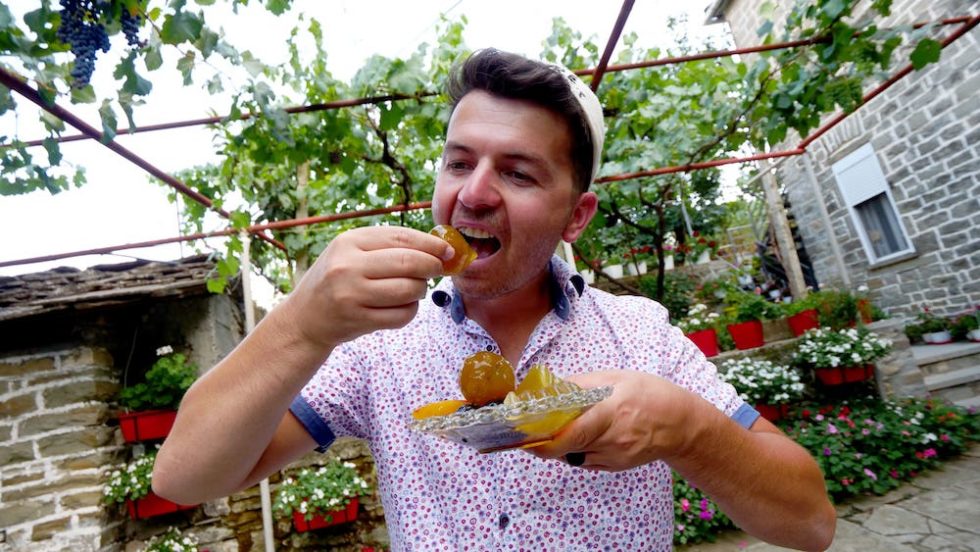 In particular, the watermelon gliko was rich, thick, and sugary, while the orange contained the fruit’s skin and flesh. The cherry was like a sweet and sour burst of juice and syrup in my mouth! I’m not usually much of a sweets guy, but this gliko had me salivating and craving more! 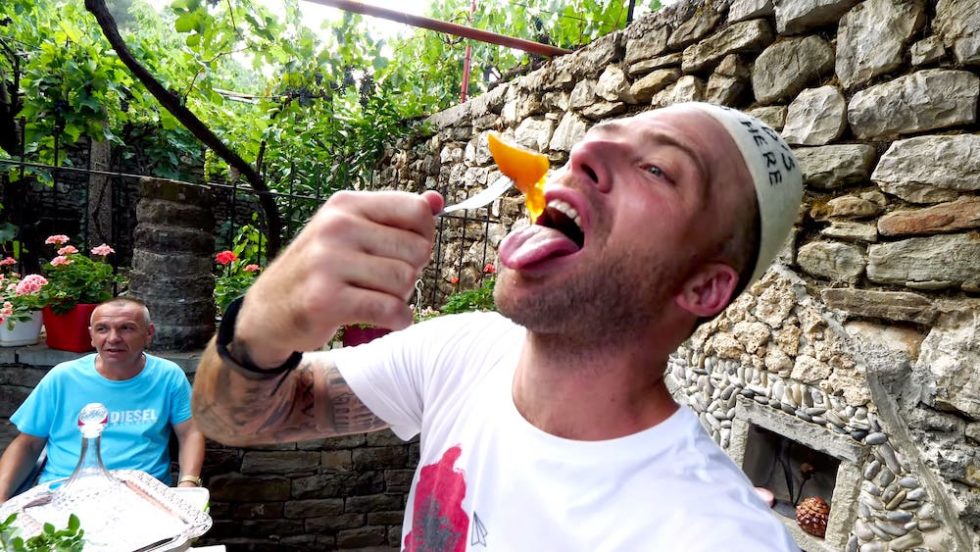 If you’re looking for a place to stay the night in Përmet, look no further than Shtëpia me Mozaik. The lodgings are comfortable, the food is fantastic, and the people who run it are some of the friendliest you could ever meet. 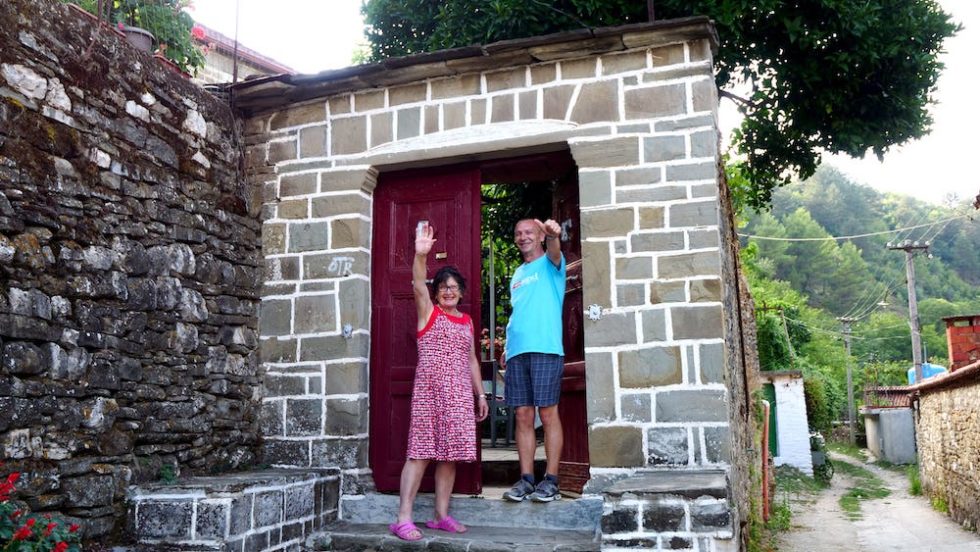 They’ll take care of you from the moment you arrive and will treat you like family the whole time. Without a doubt, one of my favorite things to see and do in Përmet, Albania.

Check out the Things to Do in Theth, Albania

Climb the Rock of the City 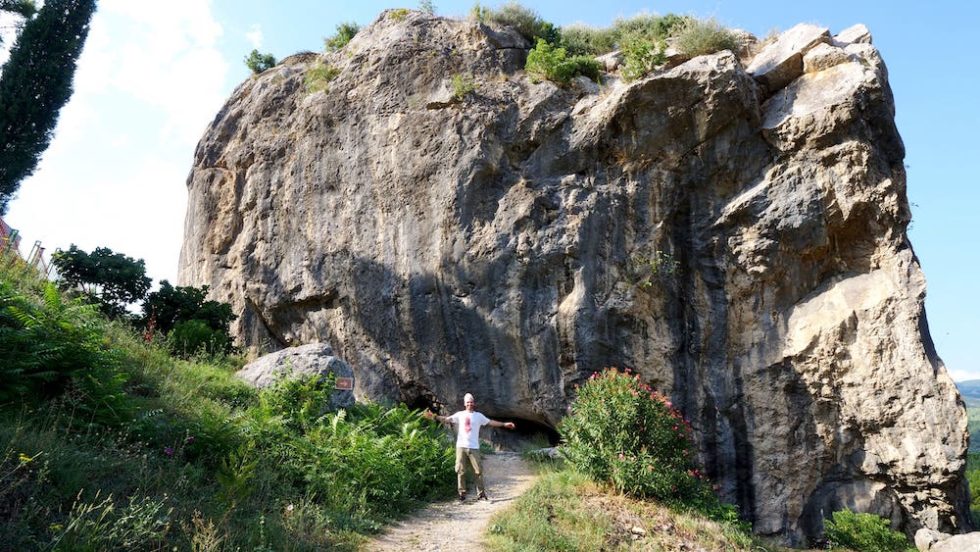 Of course, you can’t visit Përmet without checking out another of its most well-known attractions. I’m talking about the Rock of the City, which is an enormous stone monolith right in the middle of town. It’s 42 meters high and stands protectively over Përmet like a sentry on an endless watch. 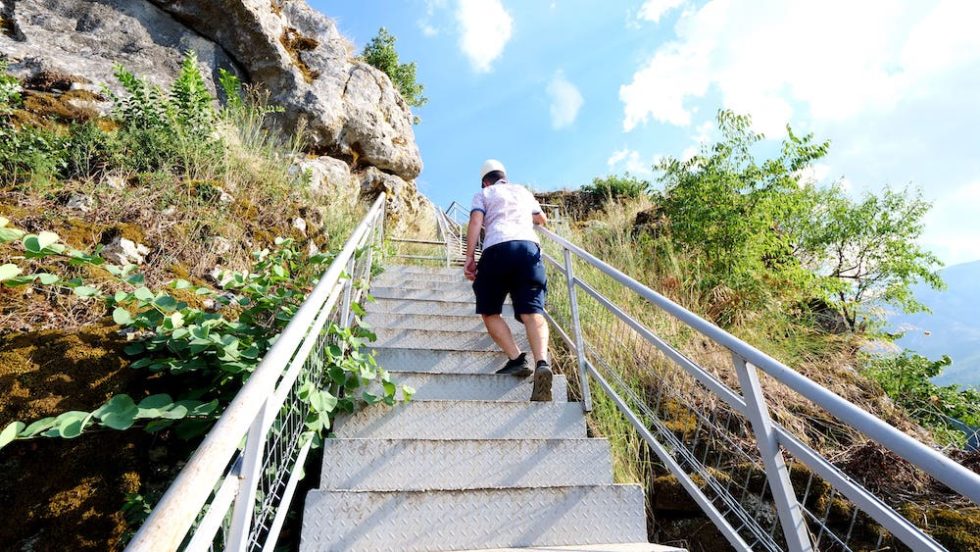 Visiting the Rock of the City is perfect for outdoor enthusiasts, as you can climb to the top via a staircase set into the rock. It’s a tough hike that will likely have your leg muscles burning, but the exercise is worth it. 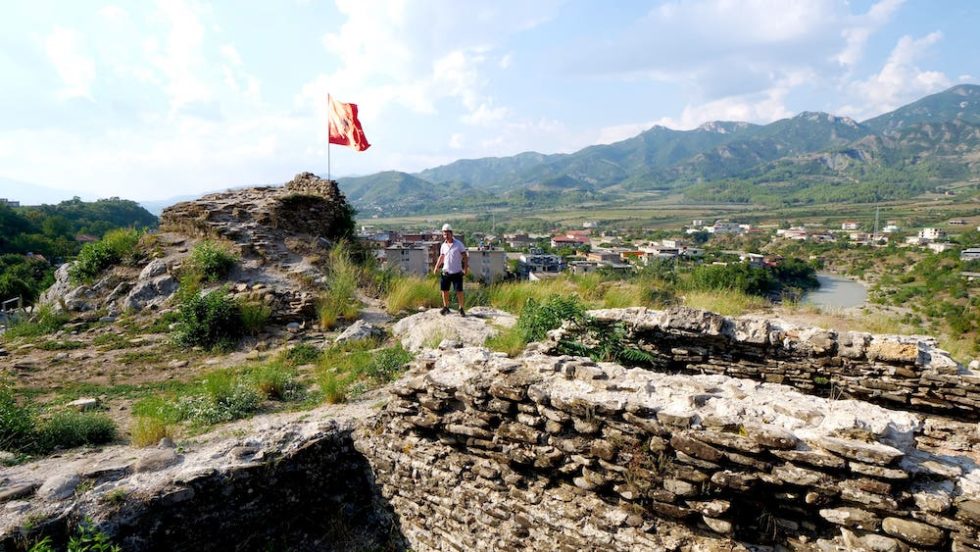 It’s also a great place for history lovers to visit, as they’ll find some ruins at the very top. Archaeologists have unearthed many important finds there from the 4th century! If you love exploring the past, climbing the rock is easily one of the best things to do in Përmet, Albania! 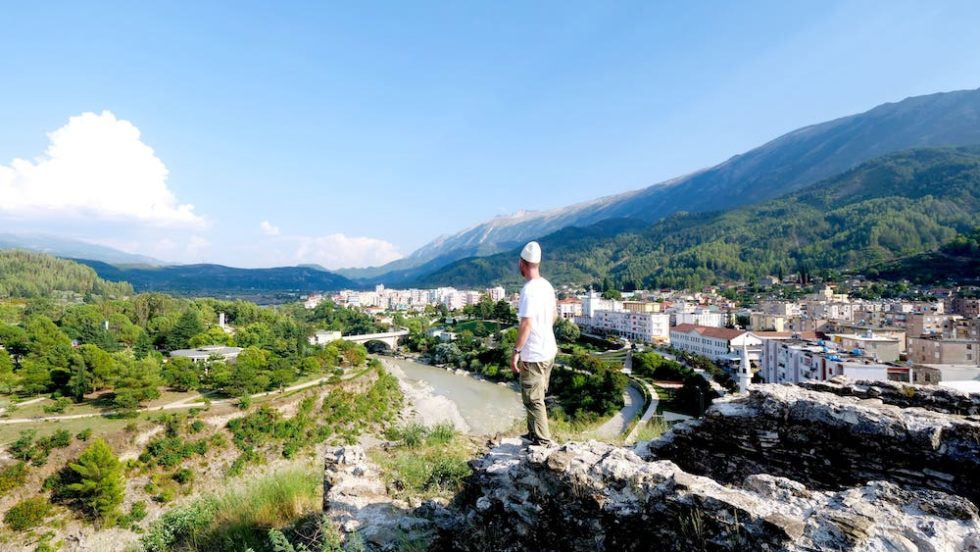 But even if you’re not a history or hiking enthusiast, you can still appreciate the epic views of Përmet from the top. From there, you can see the entire town, as well as the valley, the river, and the surrounding mountains. It’s an unbelievable sight and was the perfect way for me to end an eventful day in Përmet. 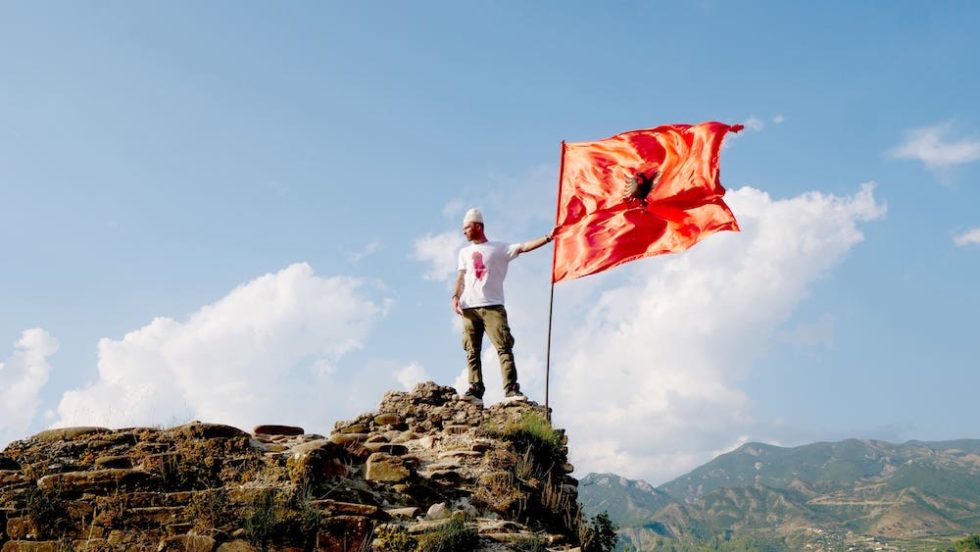 When I first started planning my trip to Albania in August of 2020, I had a feeling my time in Përmet would be special. But I didn’t realize just how special it would be. This town exceeded all of my expectations. And while there’s more I wish I could have done there, what I experienced blew my mind. Përmet will forever have a special place in my heart, and I’m sure it’ll have one in yours as well. Book a trip to Albania today to experience the wonders of Përmet for yourself. I promise you won’t regret it.