You can’t visit Brazil without indulging in some authentic Brazilian barbecue! It’s some of the best meat you’ll eat on the planet and is worth the hype in every way. Come along with me as I visit a South Brazilian steakhouse and enjoy everything from entrecote to pork to chicken in Porto Alegre, Brazil!

My afternoon began at Komka, an a la carte Brazilian steakhouse that has been in business since 1967. It focuses on serving quality meats from the state of Rio Grande do Sul! 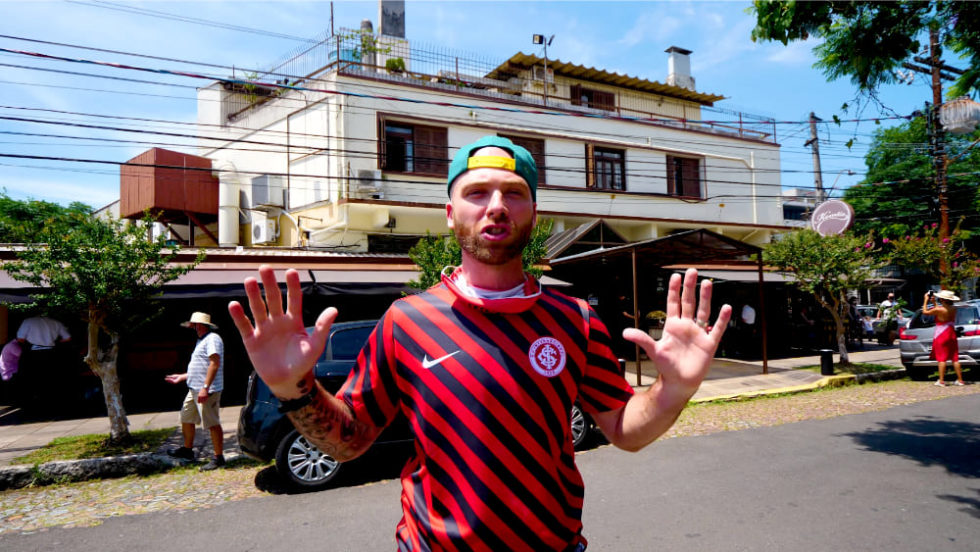 My friends Guilherme and Rafa from Rio4Fun and Rio4Food introduced me to Deco, the owner. He used to be a professional basketball player! 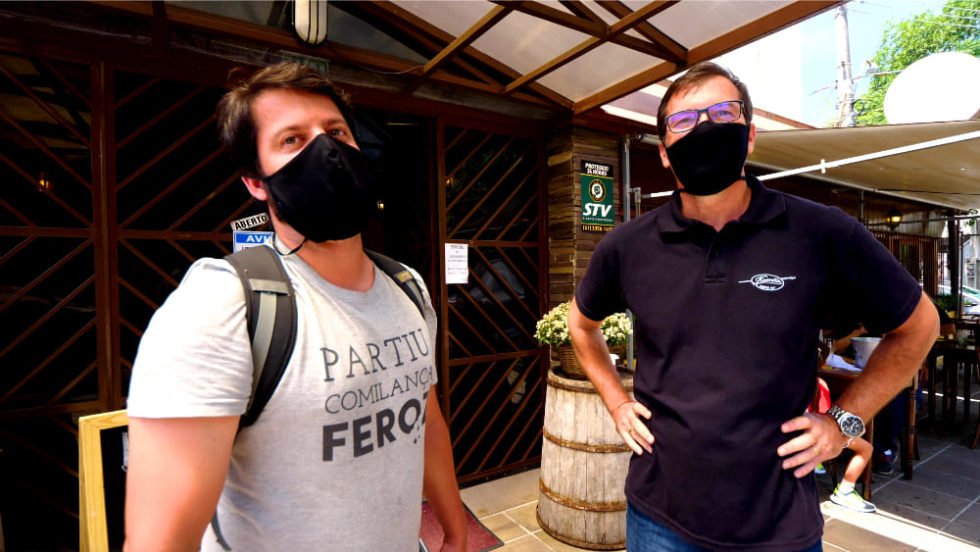 Inside are a big dining hall and two areas—an old area and a new area. In the kitchen, I saw them cooking chicken, chicken hearts, and tons of cuts of meat. Everything smelled so good! 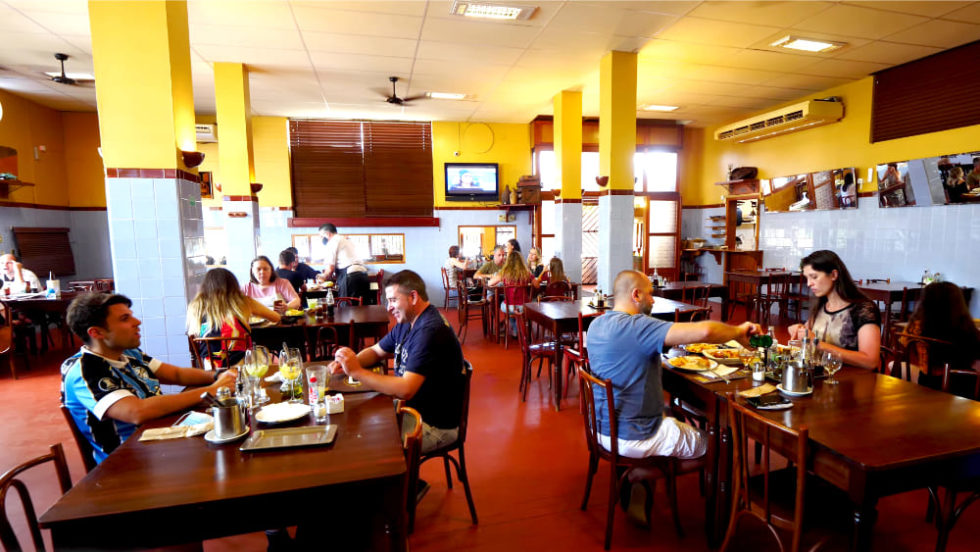 At your table, you order whatever you want and they’ll cook it in the kitchen and then serve it to you at the window. They serve premium cuts of meat seasoned with high-quality rock salt. 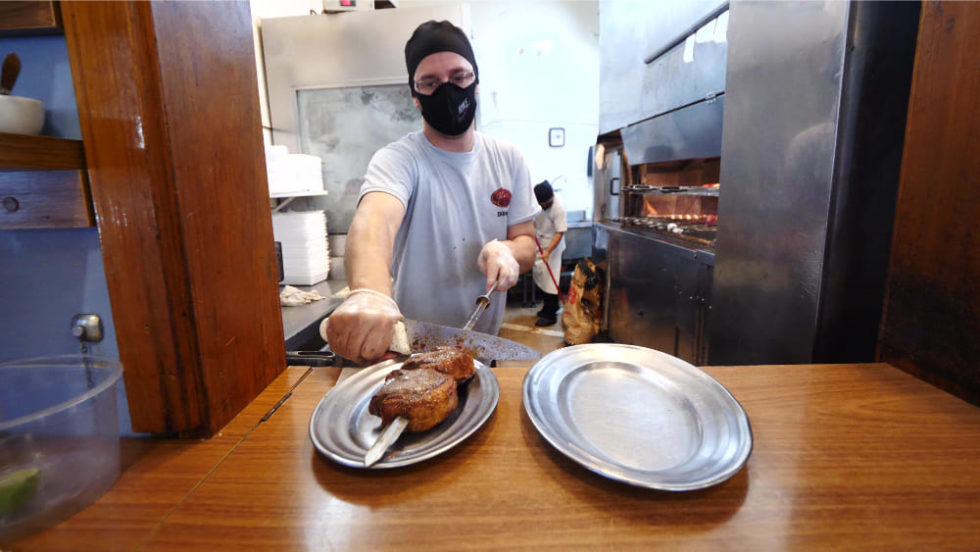 The owner served me some Heilige Pale Ale, a craft beer from Santa Cruz do Sol, a town in the state. They also have lots of other beers and wines. It was light, crisp, and a little cloudy. It tasted like a sessionable IPA. 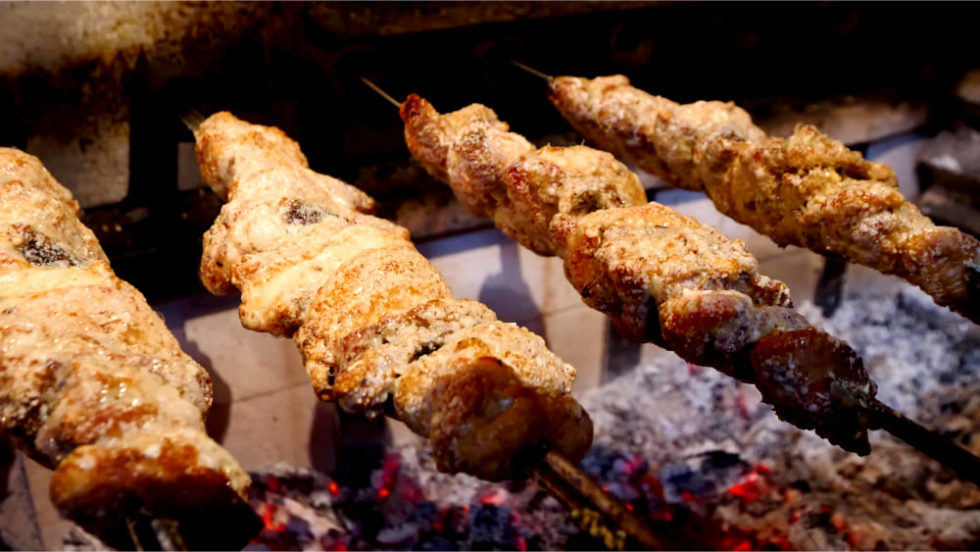 I sat on the older side of the restaurant, which has a high ceiling and blue-and-yellow walls. 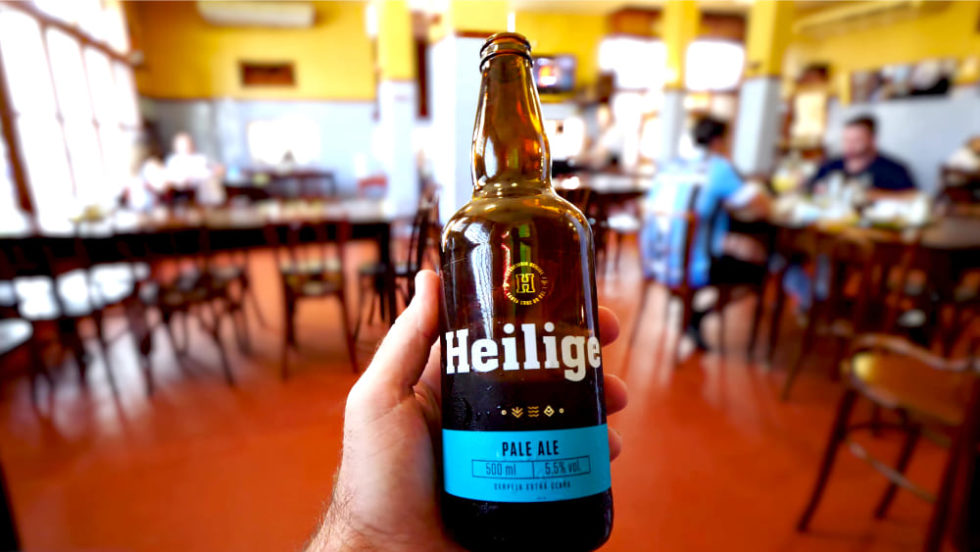 First, I tried some of Guilherme’s sparkling water, and then we jumped onto our entrecôte, which was super high quality and very fresh. I added a bit of chimichurri, which was really good! 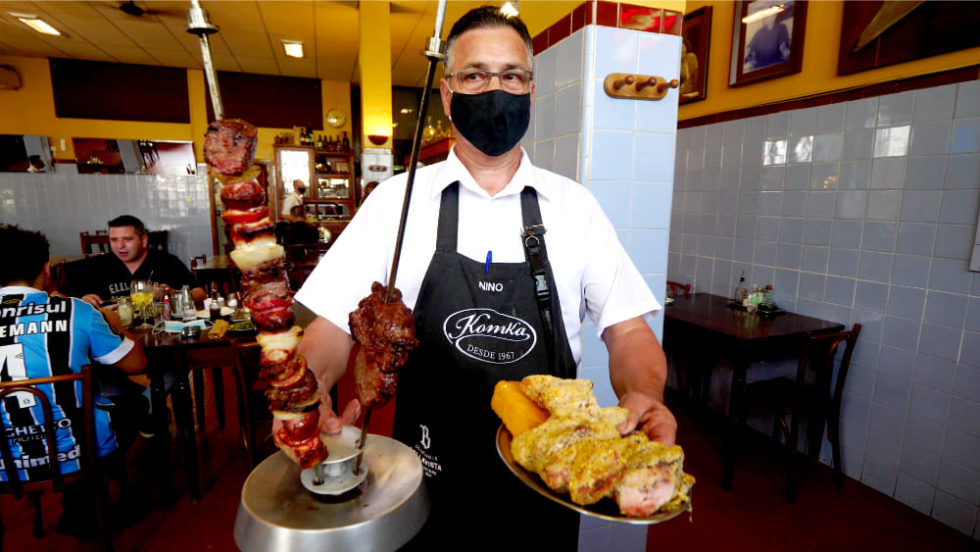 I don’t usually love chimichurri, but this one enhanced the flavor of the meat instead of masking it. It was really nice! I could also taste the Italian influence in the sausages and the polenta. 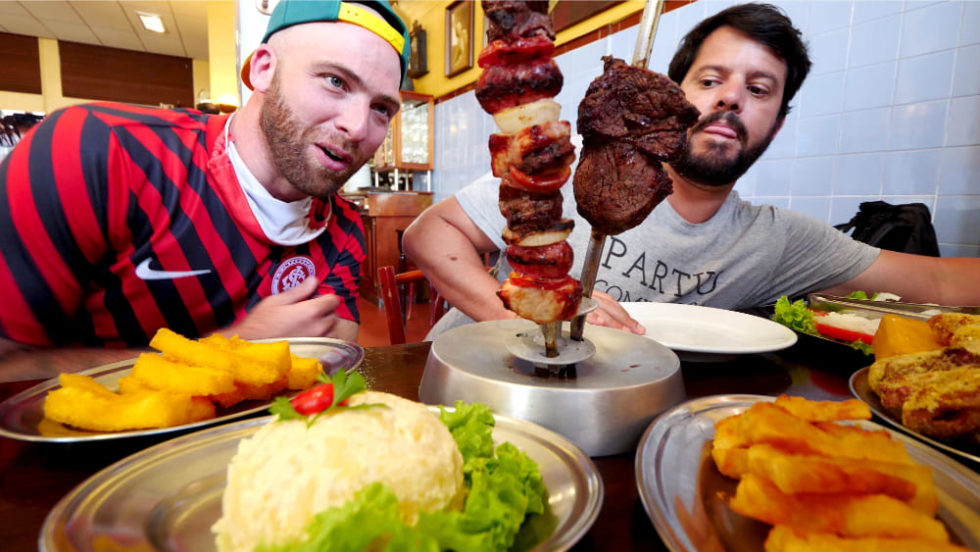 The parmesan-crusted chicken wrapped with bacon was juicy and a little salty. The cheese was a little crispy. It is served with a soft, creamy potato salad with bacon. It’s so good and is light on the mayo. The sausage with the potato salad was so flavorful! 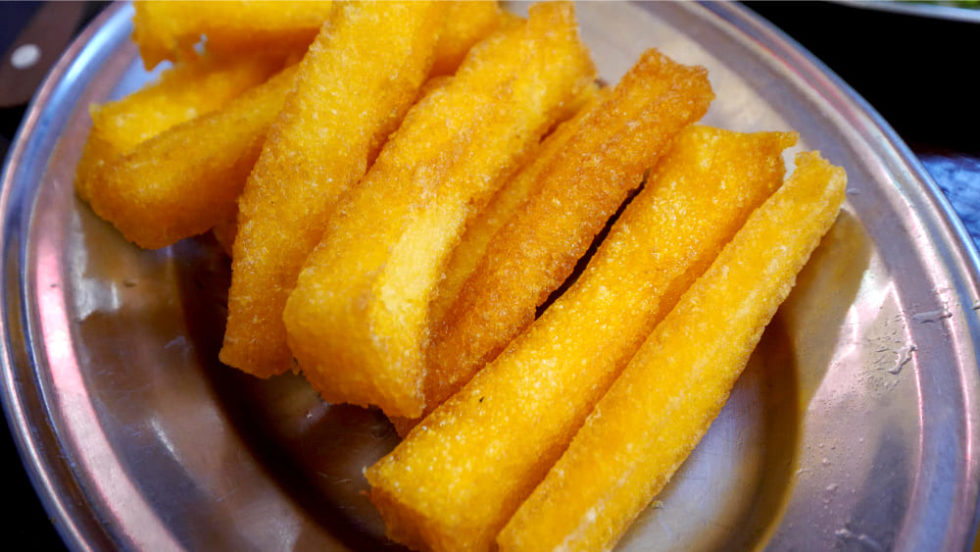 Our fried polenta sticks were crispy on the outside but light and airy in the middle. I tried it with a sweet sauce, which was like a cross between jam and honey. 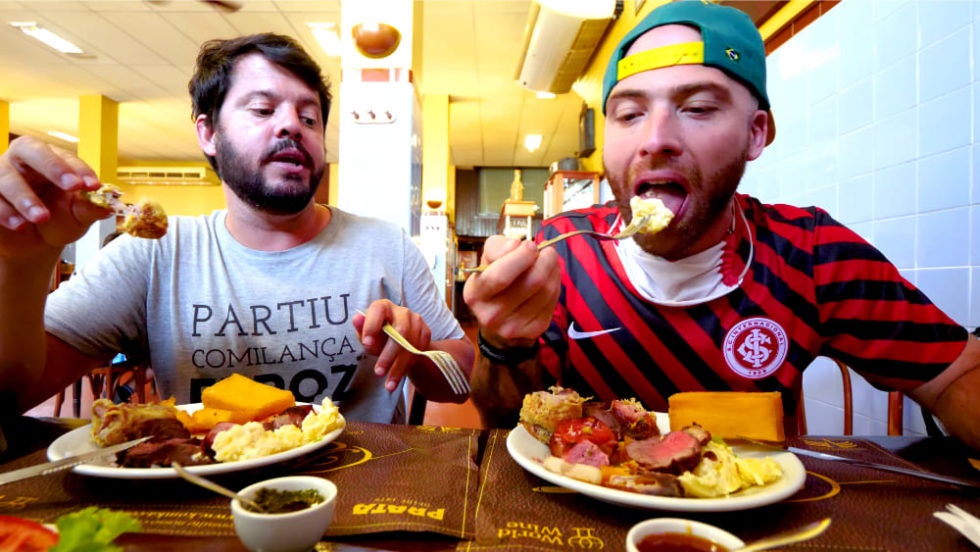 The pork was also great, but my favorite thing was the baby chicken wrapped with bacon and crusted with parmesan cheese and bacon was my favorite! 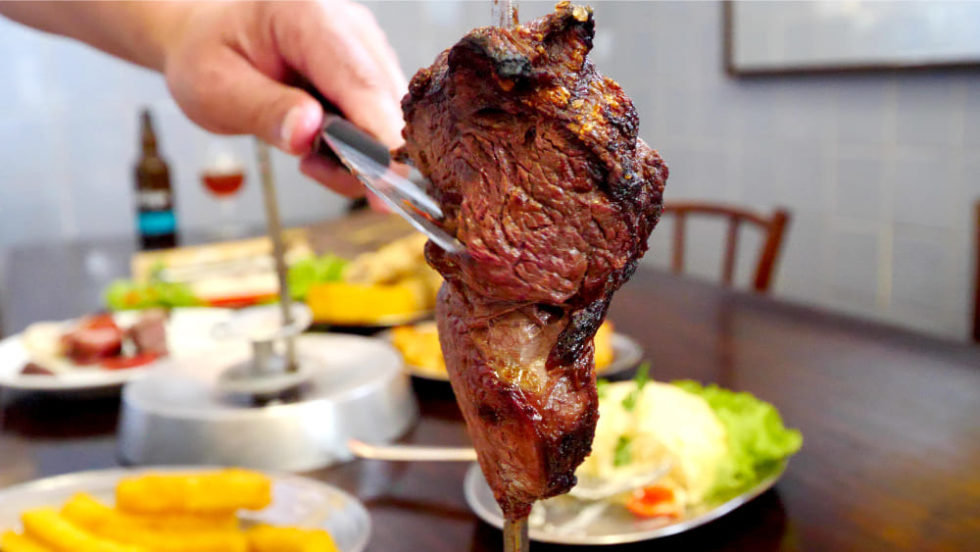 I met a fellow customer who gave me some grief about my soccer jersey—it’s of one of the local teams, but not the local favorite! Everyone there was so friendly, from the owner to the staff to the guests. Deco was so hospitable and welcoming! 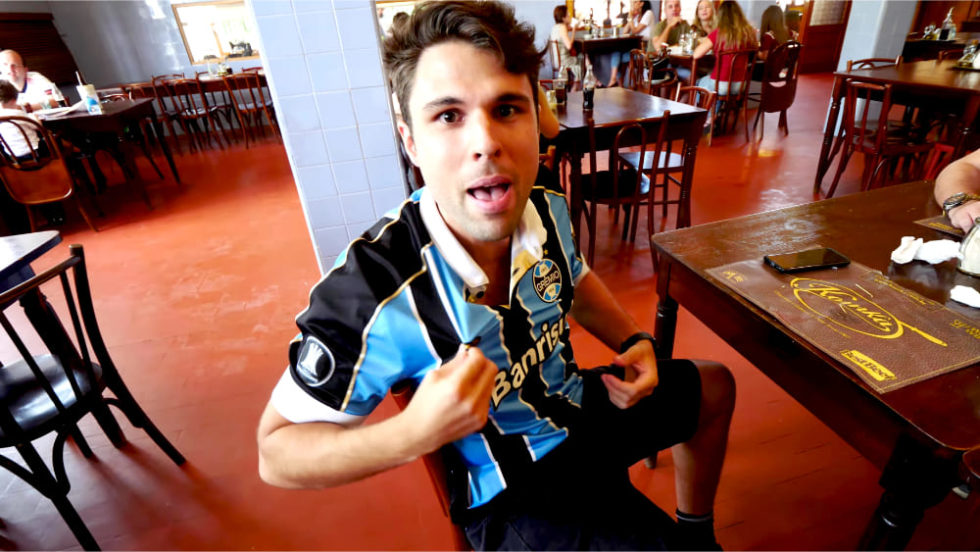 I also enjoyed a nice Hielije porter, which was my favorite porter of this trip! The owner insisted I try it! It was nice and chocolatey, and ice cold! 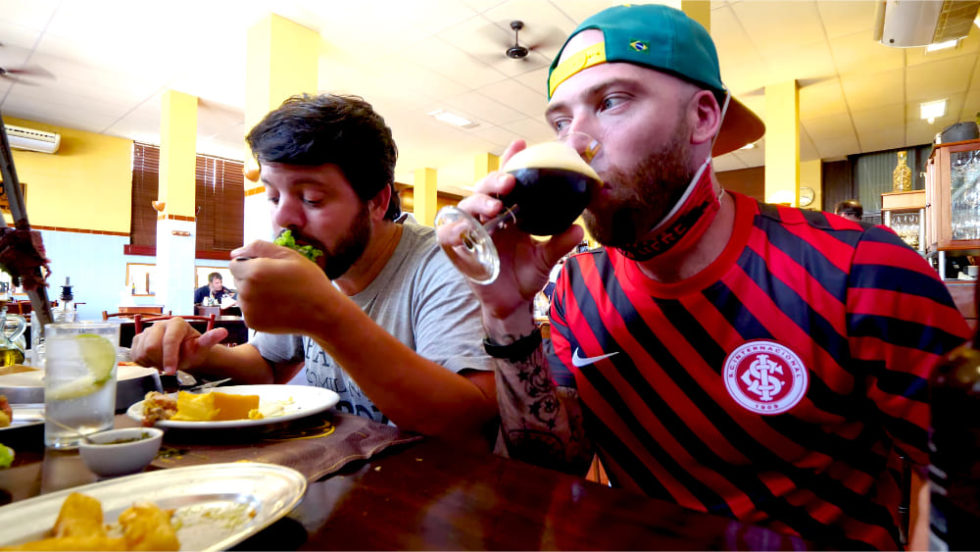 Then, we had sagu de vinho for dessert. It contains tapioca pearls, vanilla, eggs, sugar, and red wine. It’s a traditional Rio Grande do Sul dessert. It looked like a grape pudding with cream on top! I could taste the wine in it and I loved how creamy and cold it was! 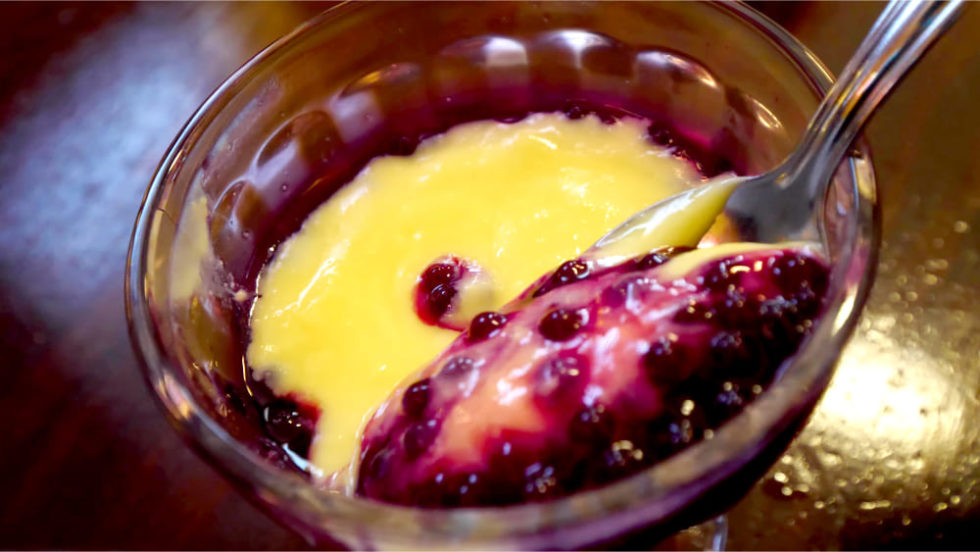 I ended with several types of cachaca. The honey one was amazing! What an epic South Brazilian steakhouse experience in Porto Alegre, Brazil! Huge thanks to Guilherme and Rafa for sharing this experience with me. I also must thank my friends at the Intercity Cidade Baixa for hosting us during our time in the city. 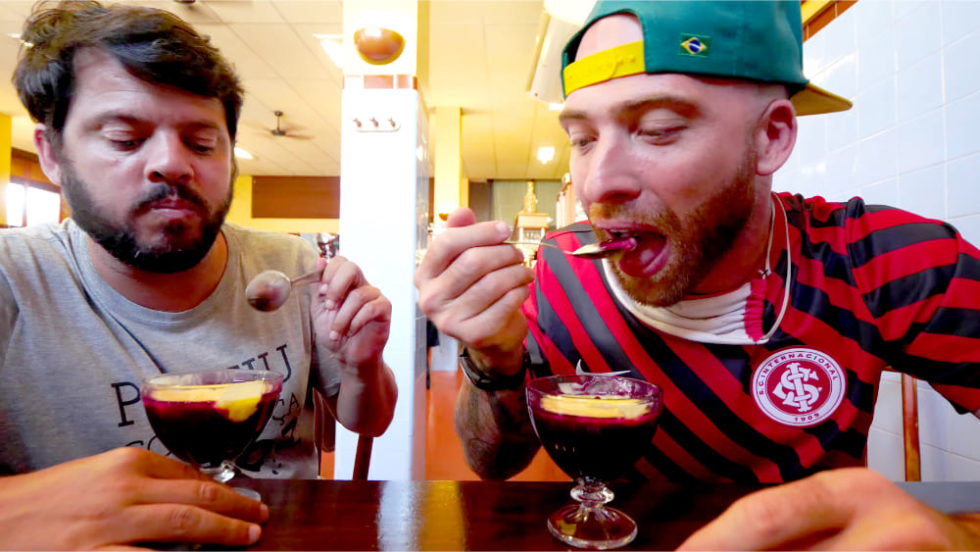 I hope you liked coming with me on my south Brazilian steakhouse adventure in Porto Alegre, Brazil! If you did, please give this video a thumbs up and leave a comment below. Also, please subscribe to my YouTube channel and click the notification bell so you don’t miss any of my travel/food adventures around the world!