My afternoon kicked off on the road one hour outside of Kumasi with my guide from Jolinaiko Eco Tours, Isaac, and our driver, Ben. After visiting the craft village of Ahwiaa earlier that morning, our next stop was the village of Ntonsu, where they make craft symbols. 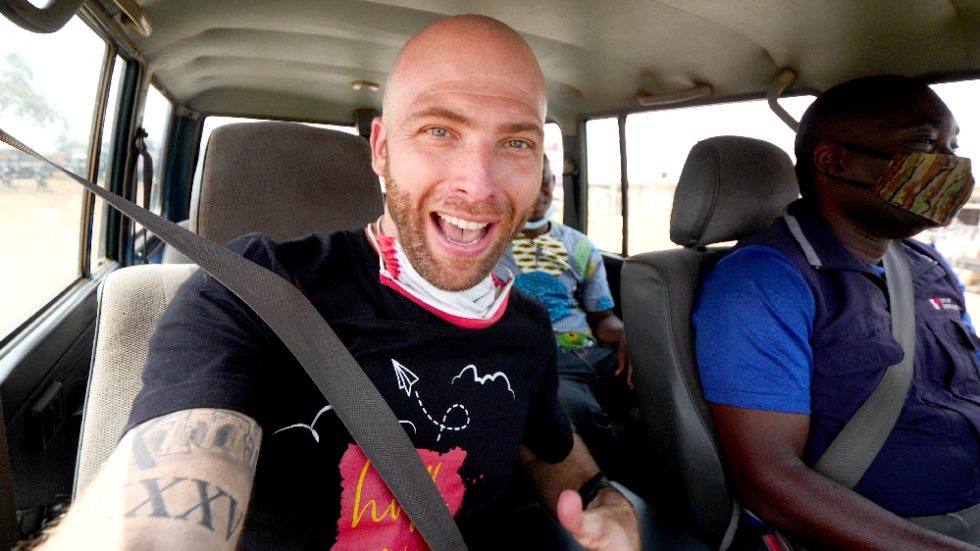 It was so hot out even though it was the end of January. As we drove, I could see carvers and blacksmiths, as well as street food vendors. There’s no shortage of street food vendors in the country. They’re everywhere along the toll areas and along the sides of the road. 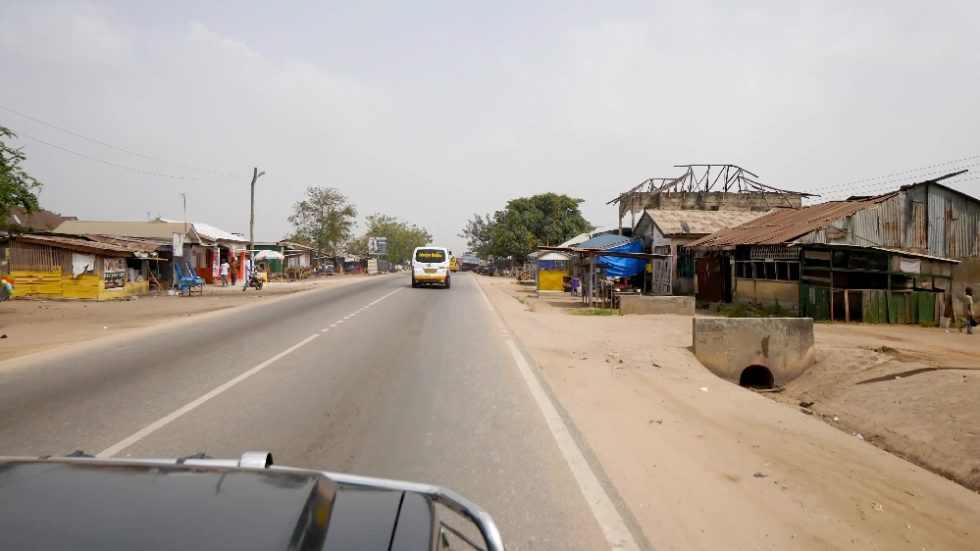 The village of Ntonsu is home to people who have been weaving for hundreds of years. It is said that the ancient inhabitants of the village admired the way the Akan folk character Anansi the spider wove its webs and sought to imitate him. 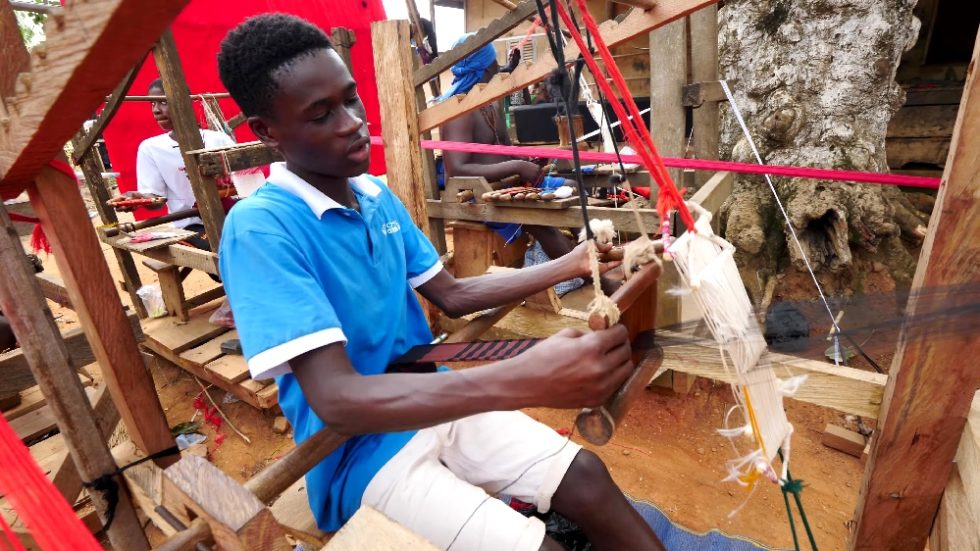 The Akan people created a special, colorful textile called Kente cloth, which dates back to the 11th century. It was worn by West African royalty in the Ashanti Empire by the 17th century. The weavers in Ntonsu stamp the cloth they create with various Adinkwa symbols, each of which has a different meaning. 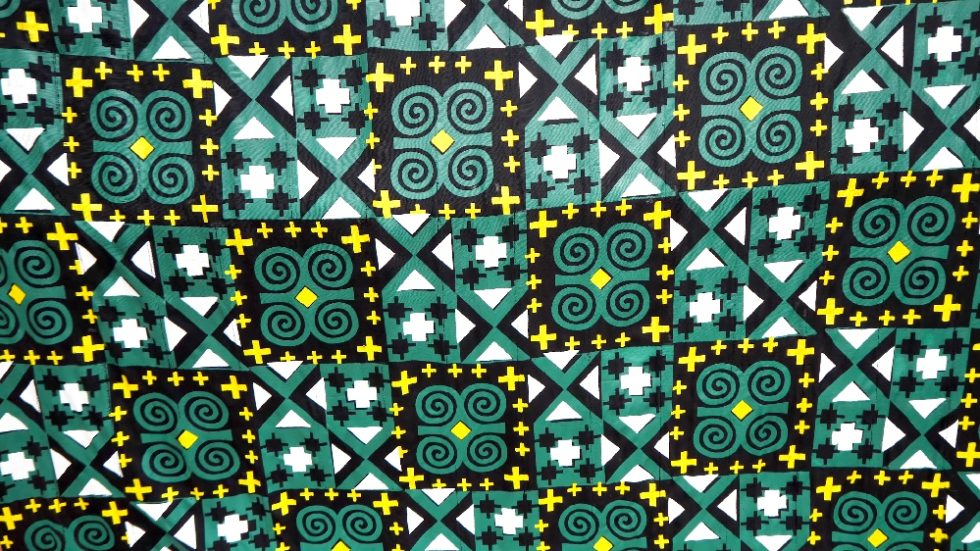 The cloth they create at the center is beautiful! They do both weaving and printing there. I met up with a man named Kochu, who gave me a tour of the center. They had pots of dye boiling over fires. They get the dyes from tree bark, which they soak and pound into a soft dust, which they then boil.

Then, they strain the water and boil it again! The more they boil it, the more concentrated the dye becomes. They then use the black dye to stamp symbols on the cloth using calabash stamps. There are over 60 symbols in total! 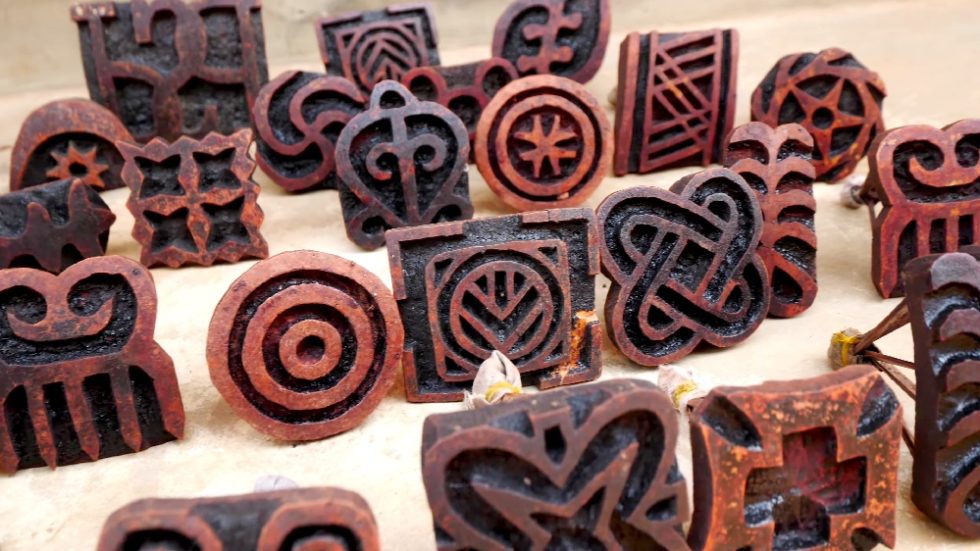 Kochu then stamped pink and blue cloths with three symbols for my daughters: unity, sun, and life.  Next, they dry the cloth in the sun. You can also buy Kente cloth that’s already made. The price depends on the size. 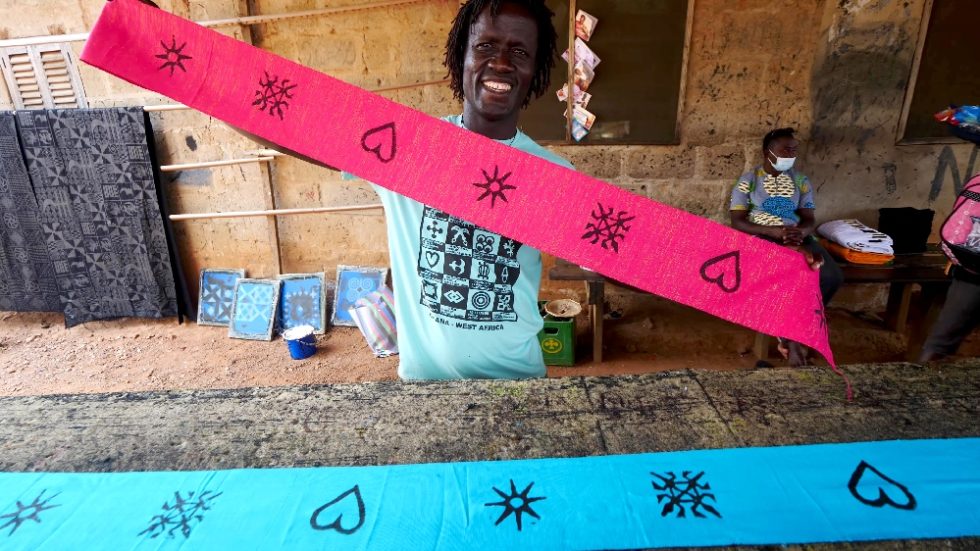 Then, we headed to a dedicated weaving village called Adanwomase. I saw some guys making cement bricks. In the visitor center, a local man told me about he history and significance of Kente cloth. 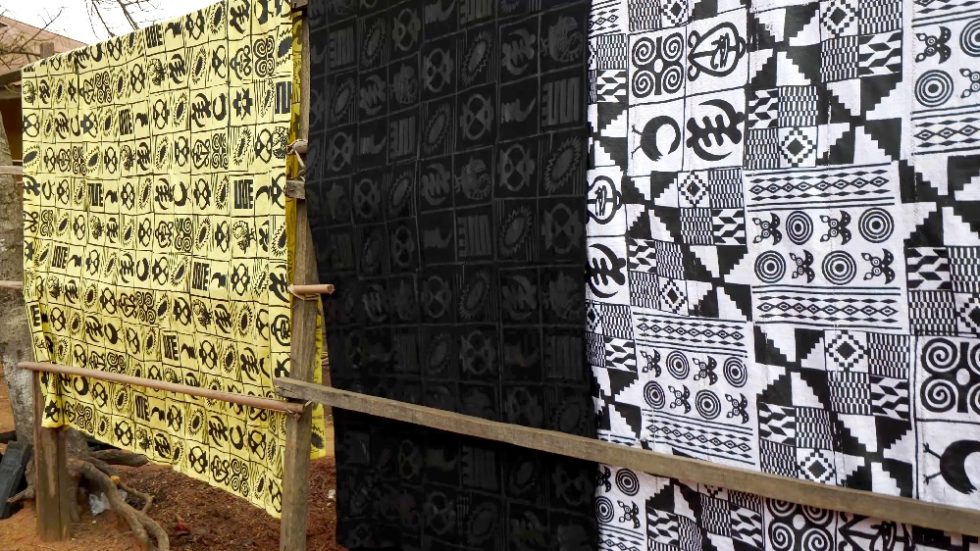 Back in the day, only kings wore Kente, but now anyone with enough money can wear it. The designs tell stories of history and have lots of symbolism. 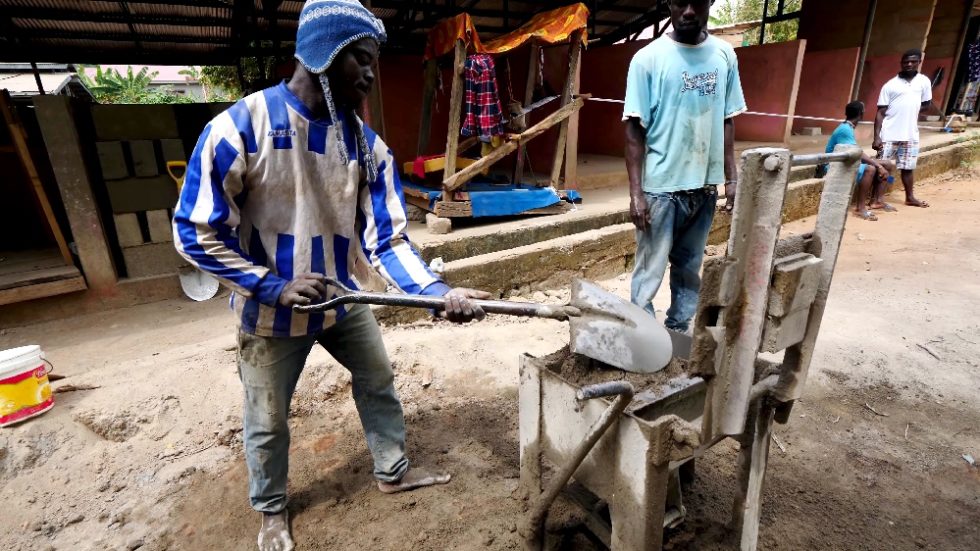 The weavers have to calculate how much of each color yarn they will need for their creations. There are 70 weavers in the village, and they’re all men. I saw men making all kinds of beautiful designs. 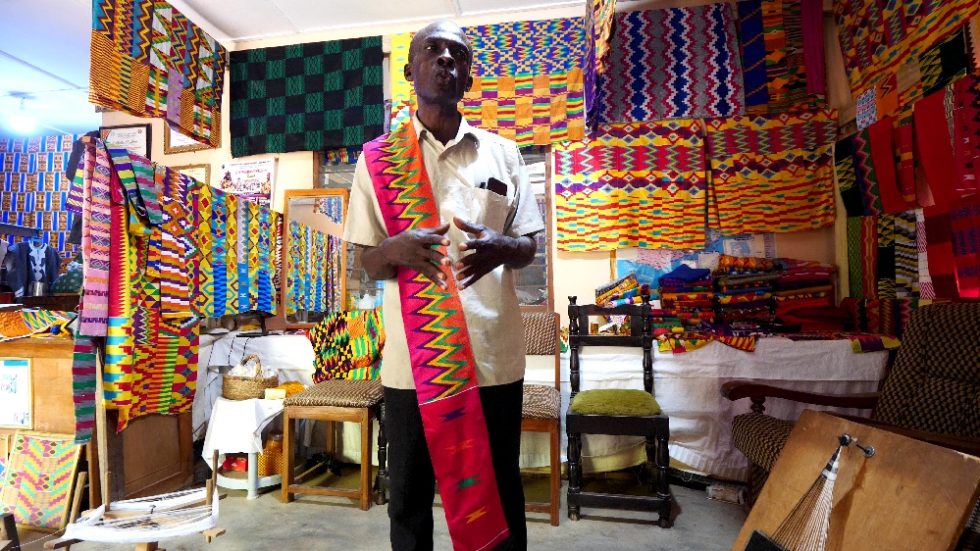 Some were white and black, but others had vibrant pinks, purples, and yellows. They work super fast and use both their hands and feet! 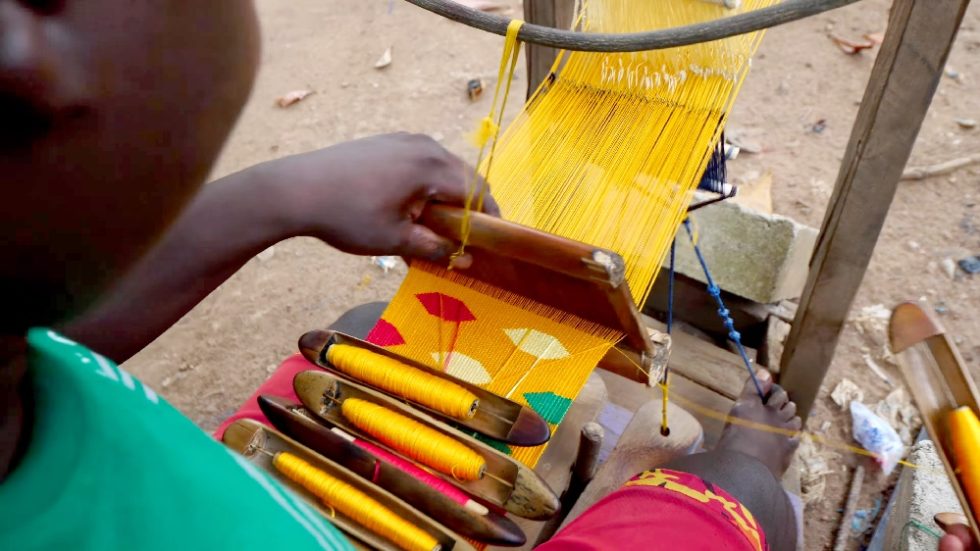 I’ve been to weaving centers in Uzbekistan and China, but I’ve never seen one this big. It was really remarkable how talented and proficient they are! I saw guys doing double-weaving and others doing complex triple-weaving. It was fascinating! 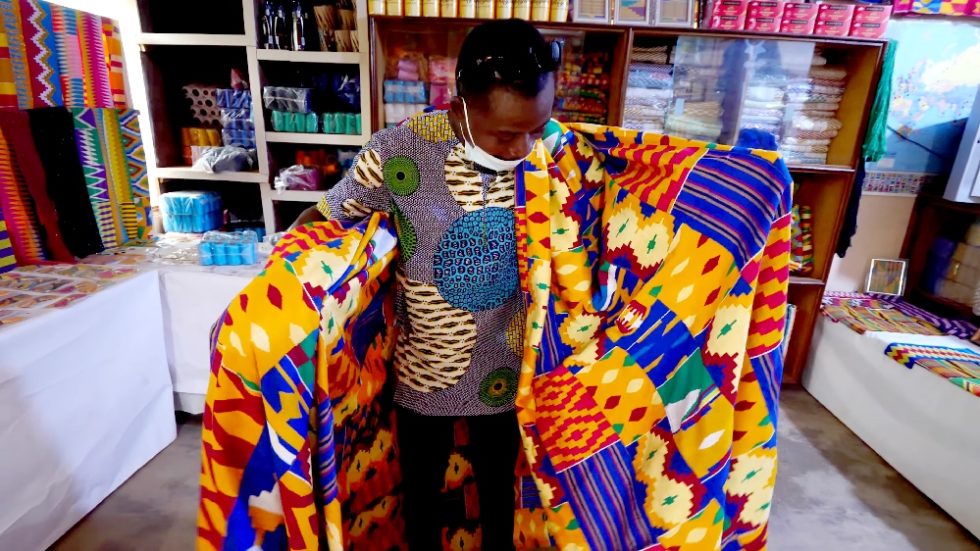 Back at the shop, you can buy some Kente cloth. I saw a huge piece for about $340 USD and bought a small one for $10 USD.

Next, we stopped at a shop and got some palm gin. I was feeling off because of the heat and I was fighting off a stomach bug, but I also couldn’t wait to eat! 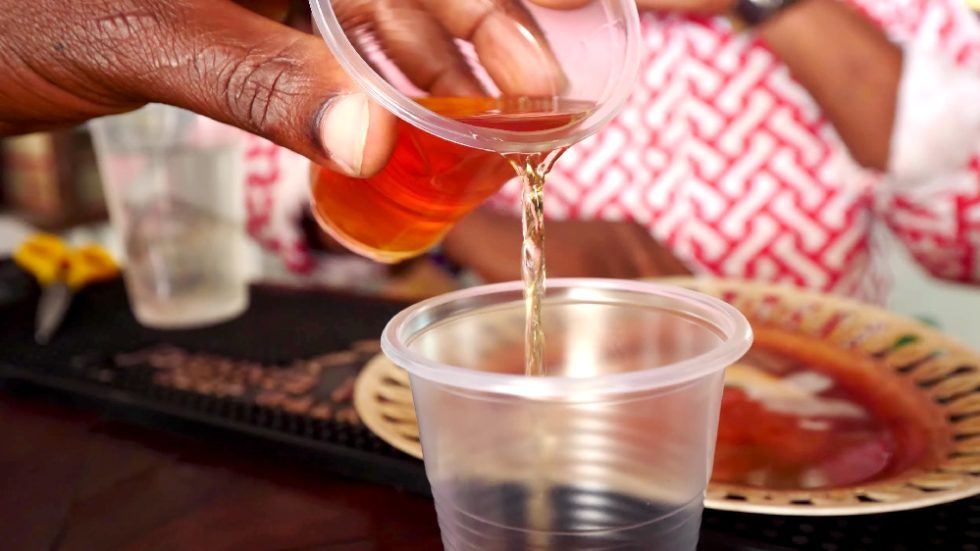 In the back, I got a dish called kokonte, which is made of cassava flour. It’s a common staple dish that is eaten in Ghana, Togo, and other West African nations. The dish is also sometimes known as “Face the Wall” because it’s considered a low-class food that many people would feel shame in eating. 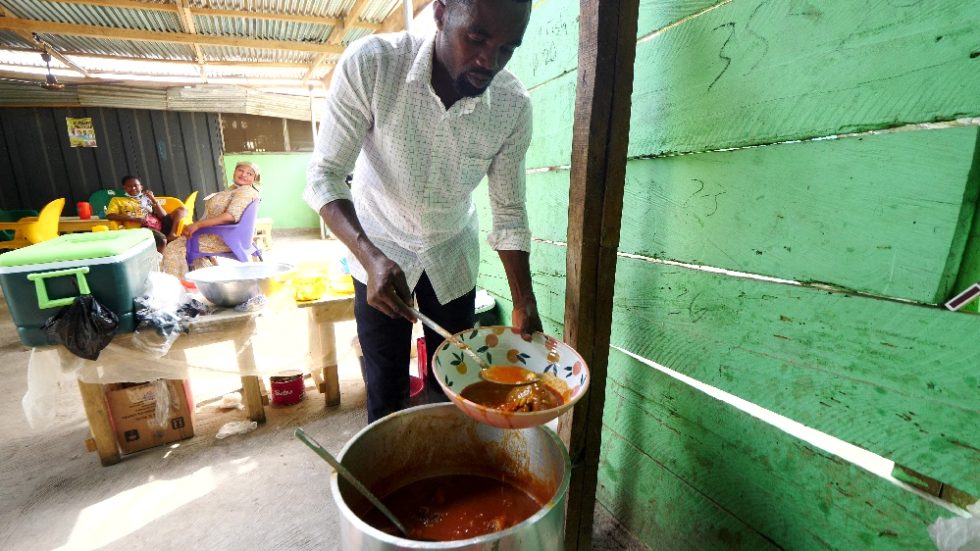 As always, I washed my hands with soap and a pitcher of water before digging in. It looked amazing, very similar to the fufu I’d had earlier in my trip. 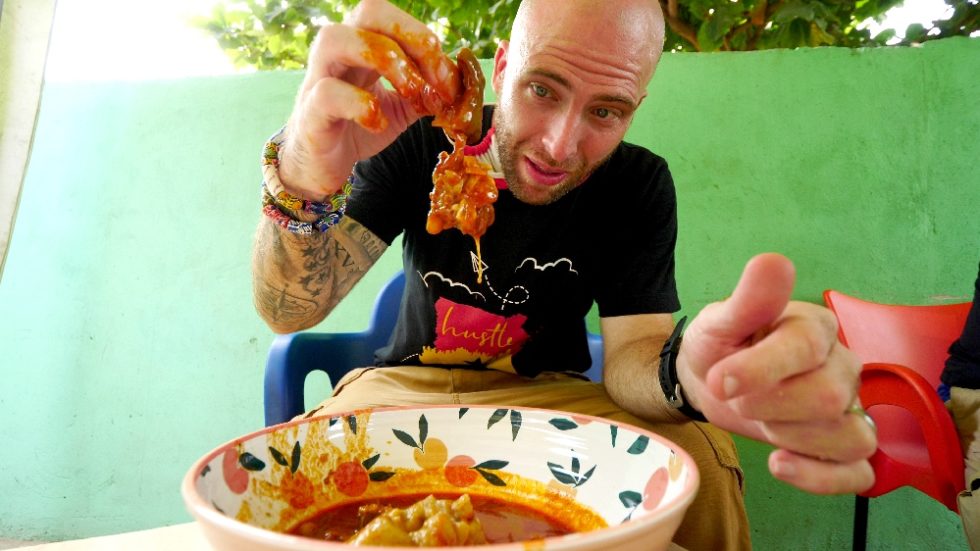 The kokonte looked and tasted exactly like fufu, so I couldn’t tell the difference between them. It’s pasty and starchy, and you eat it with meat. I had some goat, which was full of fat and flavor. 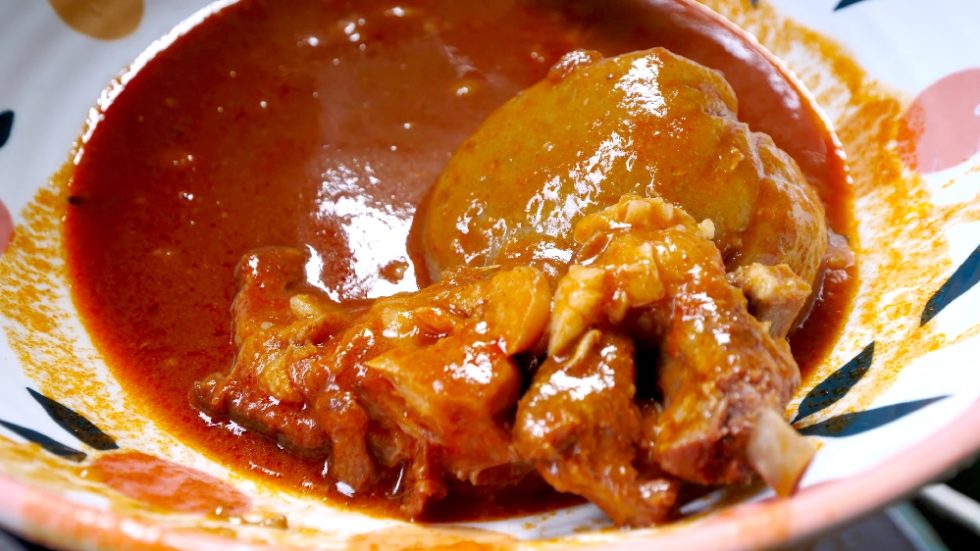 It wasn’t spicy but was full of spices. The stew it came with was a rich, reddish-brown color, but the color of the dish can vary depending on the ethnic group that prepares it. 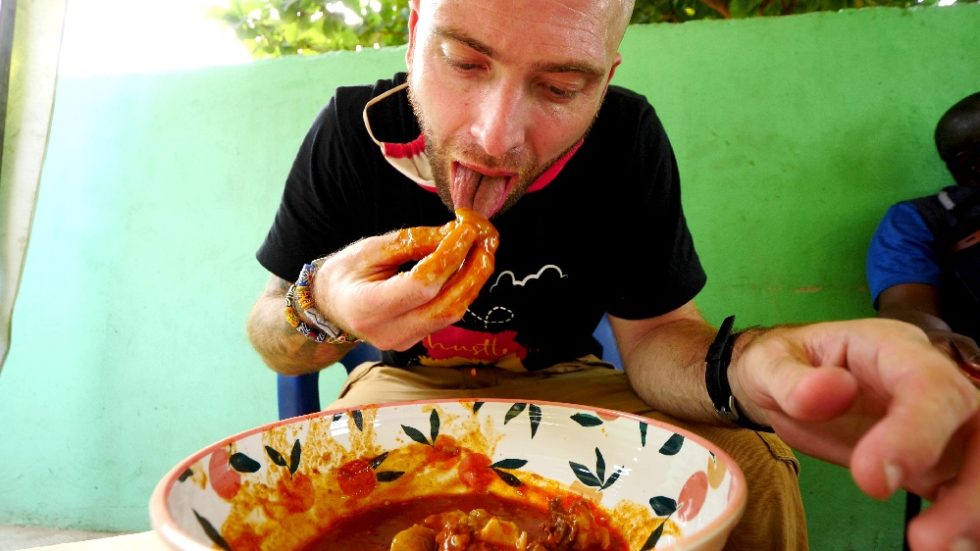 One of my favorite things about the dish, outside of the goat meat, was the red oil that comes from the palm nut. They also use the oil in a bean dish called red-red. The gravy and stew were outstanding!

Eating traditional West African street food and touring the weaving village outside of Kumasi, Ghana was such a powerful and fascinating cultural experience. This is the reason why I travel: to meet new people, try new foods, and get a deep look into the lives of people around the world. It’s the best education you can ever get! 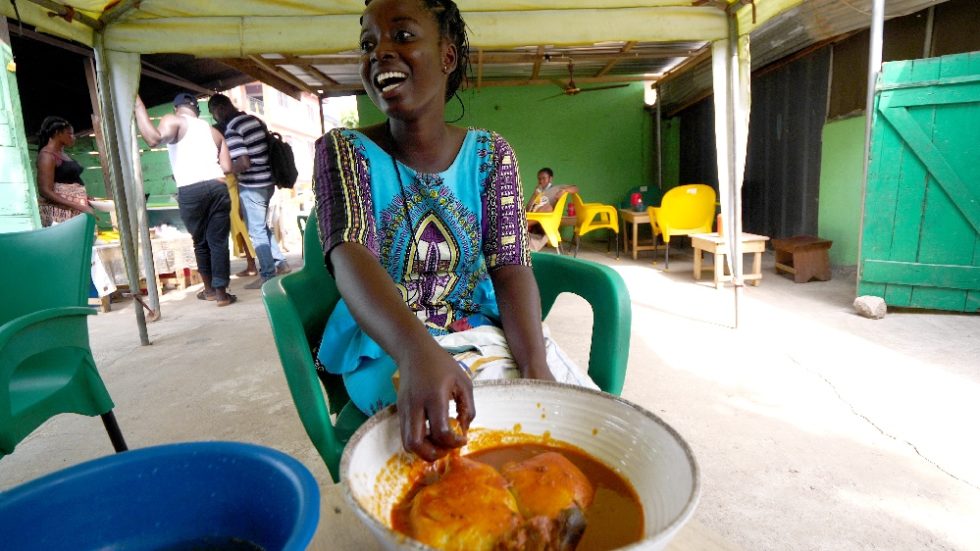 I hope you liked coming with me to try traditional West African street food and check out the weaving village of Kumasi, Ghana! If you did, please give this video a thumbs up and leave a comment below. Also, please subscribe to my YouTube channel and click the notification bell so you don’t miss any of my travel/food adventures around the world!