With less than a day to explore the city of Tamale, I hit the ground running to see as much as I could in the third-largest city in Ghana! Join me on a mind-blowing West African adventure as I try some northern Ghana street food and go on a local tannery and market tour of Tamale, Ghana!

My afternoon began at a local tannery with my boy Isaac from Jolinaiko Eco Tours. There, I could see leather drying on a clothesline outside. It’s made from sheep and goatskin and goes through a fascinating process. They soak it in a solution that makes it easy to remove the hair. 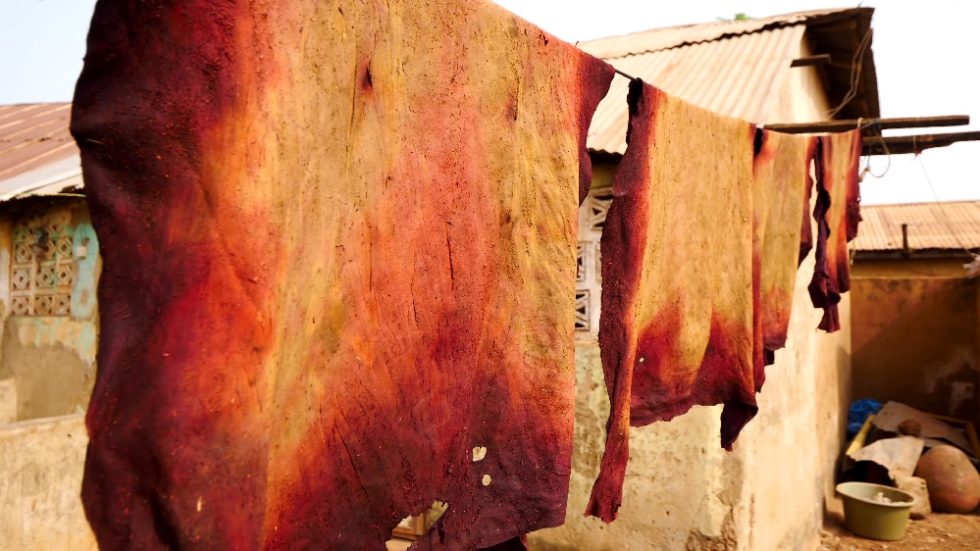 Then, they use different plants as dyes to make red, brown, and black leather. Dying takes one day. Then, another man stretches it and they let it continue drying. They can make 100 pieces of leather per day. The whole process is pretty complicated takes about a week! 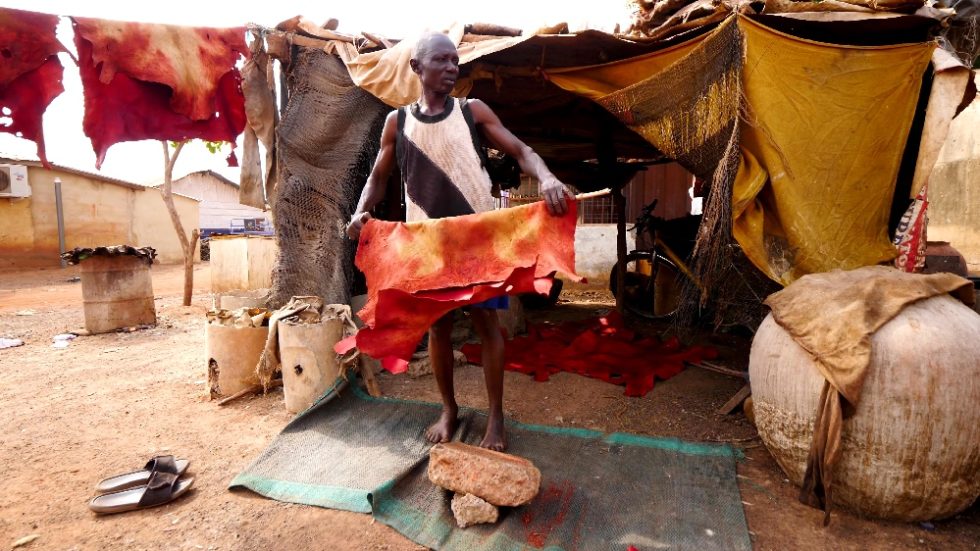 I wanted to get some leather goods! This was only the second tannery I’ve ever visited. Isaac and I headed over to the shop, where they make belts, sandals, wallets, and more. The soles of the sandals are made of car tires. The sandals cost 30 cedis, or about $6 USD. 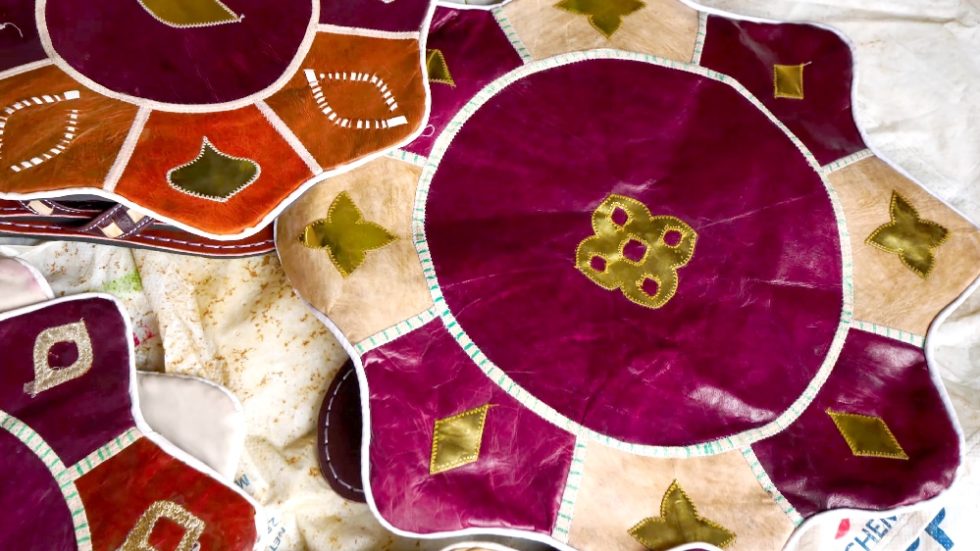 I tried one on. It fit me perfectly! Then they brought me some wallets, which cost 20 cedis each. One of them was made of snake skin! I also bought two pillows! 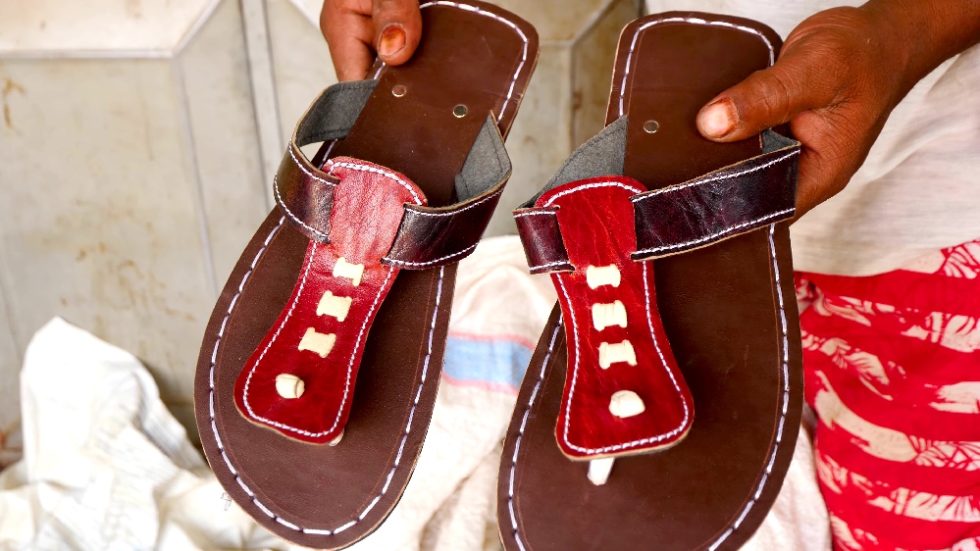 Next, we headed to the Central Market of Tamale. We passed through the city, past mosques, food vendors, seamstresses, and more. I noticed Tamale was a rural city. It’s home to about 1 million people, and the city was alive with tuk-tuks! They’re the main means of transportation in the city. 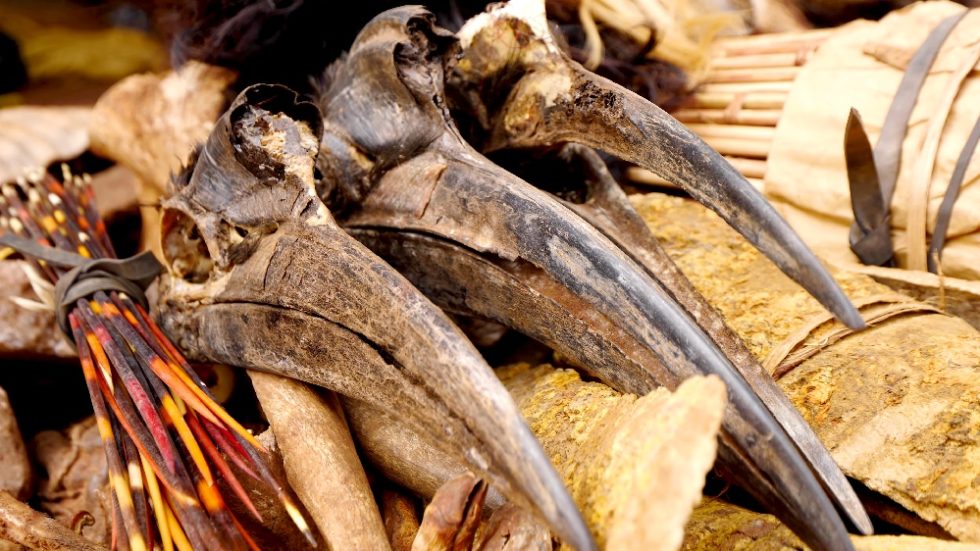 The market is very spread-out and quite different from the markets in Accra and Kumasi in terms of layout. I found a vendor selling traditional hats. They came in a variety of beautiful colors. I tried a few on and bought one for 20 cedis. 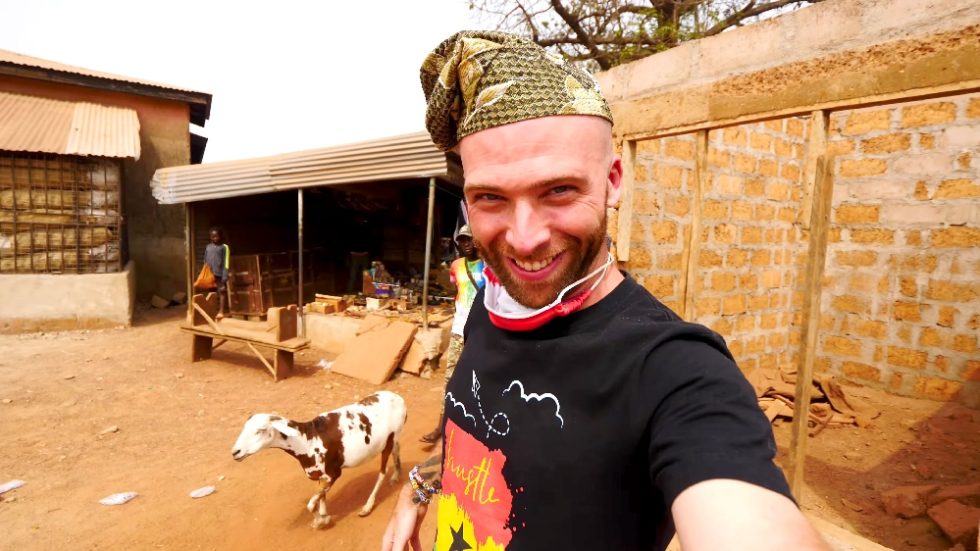 Then, we found another vendor selling more unique medicines and ritual items including warthog tusks, animal claws, and crocodile heads. They died of natural causes and aren’t hunted. 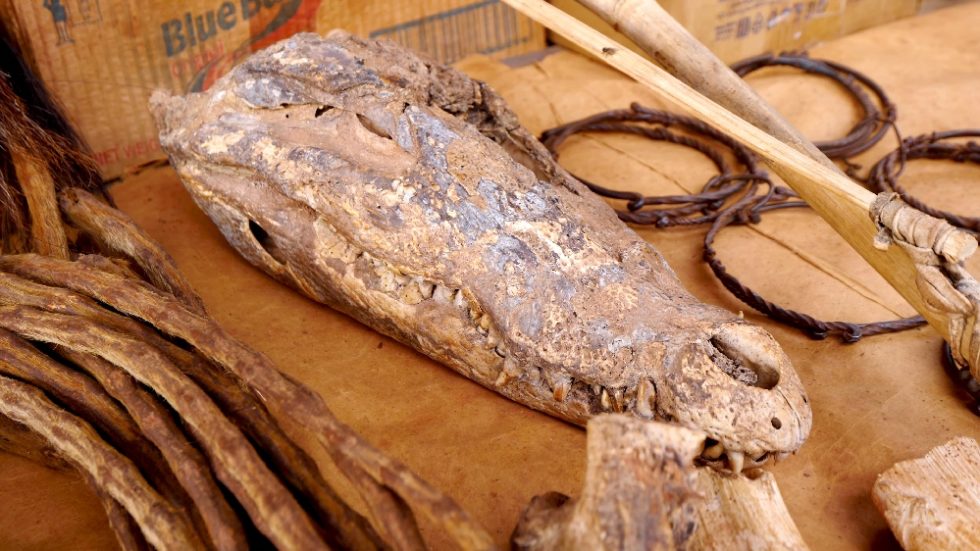 Next, I came across the tailors, or designers, who sew textiles into hats, smocks, and other clothing items. Every shop in this area had hats! As we continued on, the market became more congested in the food area. I saw beans, rice, fruit, as well as chickens, ducks, turkeys, and guinea fowl. Then, I got some unripe papaya from a vendor for 1 cedi. The whole market was a wide array of smells and flavors! 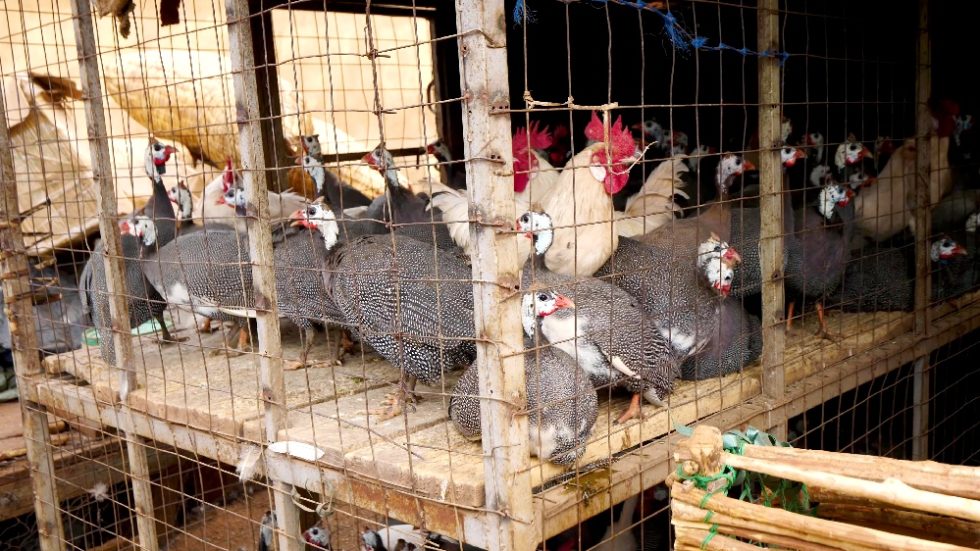 The butcher shop contained ten butchers. I could see beef, lamb, and goat. The smell was intense, but I love seeing it all, including the organs! There were less crowds here, which I liked. I visited a shea butter factory and rubbed some on my arm. Then, I met a woman selling some. She has been making it since she was a child!

Isaac bought a huge ball of shea butter for 30 cedis/$6 USD for his aunt in Accra. Then, we came across seven women pounding fufu at once, as well as organ soup. Next, I found a vendor selling fruit and giant bars of soap! 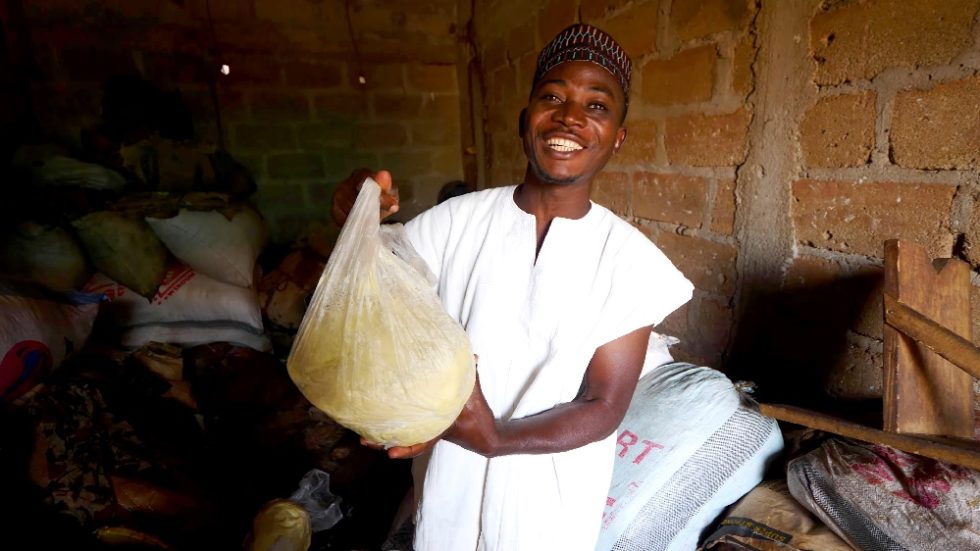 By 1 p.m., the market was getting packed. Our next stop was the art shops at the cultural center. A woman named Sylvia sold baskets, wood carvings, animal figurines, leather goods, maps, and jewelry. At Adongo Art Works, I bought four brass beer opener for 100 cedis. Then, we went to get some fufu at a small chop bar next to a gas station near the airport. 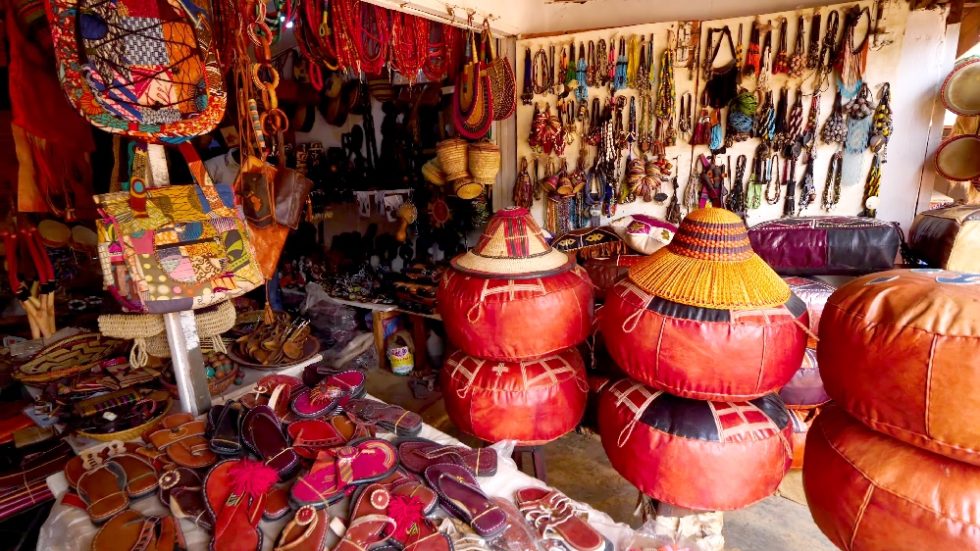 My fufu came with chicken thighs, a chicken drumstick, and peanut soup. I washed my hands beforehand since I would be eating with my hands. 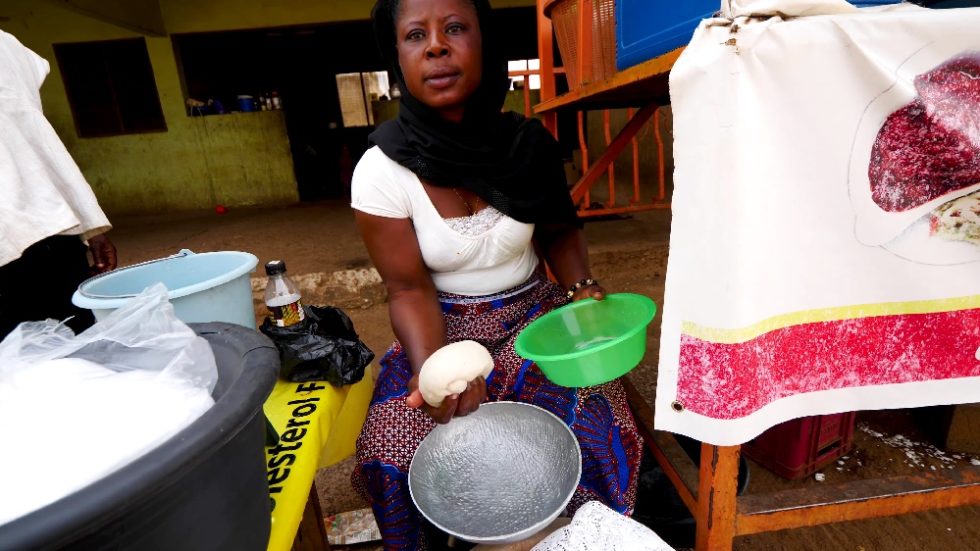 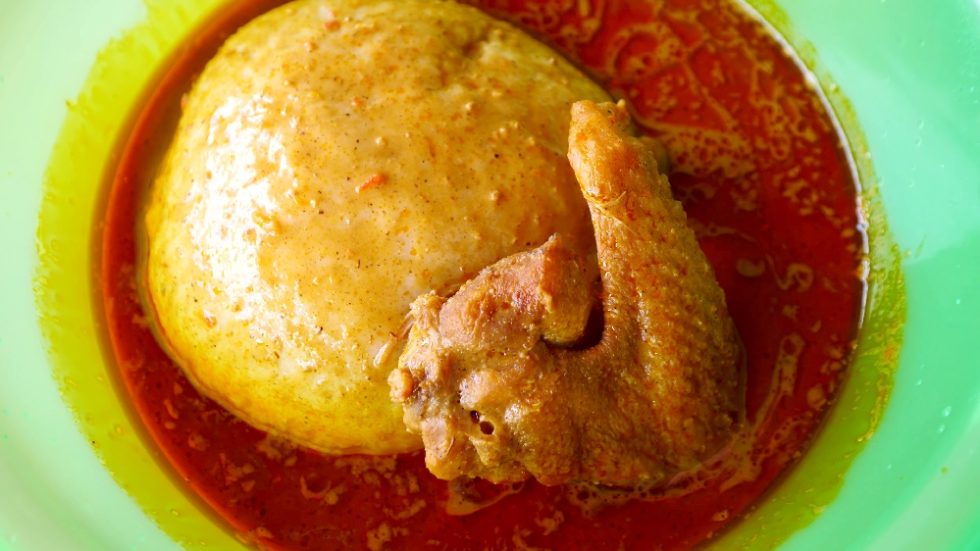 Fufu is pounded cassava mixed with plantains or cocoyam. It goes with every type of soup. The fufu was so tasty and paired so well with the chicken. It was so good, I couldn’t help but keep digging in even though it was burning my hands!

What an incredible way to end my time in northern Ghana. The northern Ghana street food, coupled with the tannery and market tours, was the perfect way to spend my time in Tamale. Massive thanks to my Ghanaian brother, Isaac, my driver Ben, and the entire Jolinaiko Eco Tours team for making this trip so special. Book with them when you come to Ghana! They’ll take good care of you. 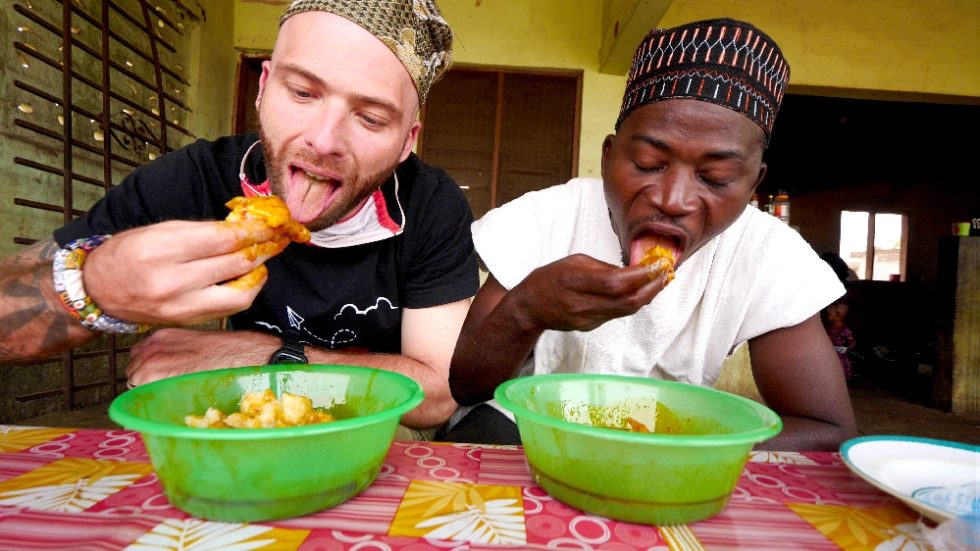 I hope you liked coming with me to have northern Ghana street food and tour the tannery and central market in Tamale! If you did, please give this video a thumbs up and leave a comment below. Also, please subscribe to my YouTube channel and click the notification bell so you don’t miss any of my travel/food adventures around the world!