My adventures in Ukraine continued as I learned to make a traditional Ukrainian breakfast before exploring Kyiv Pechersk Lavra, the holiest place in the Orthodox religion in Kyiv, Ukraine. Come join me on my latest food and culture adventure in the capital of Ukraine!

My morning began at Sho, a popular restaurant in the capital whose name translates to “What.” They make traditional Ukrainian food in a gorgeous, modern space. My guide Margarita from Tours by Locals and I were ready to have some breakfast! 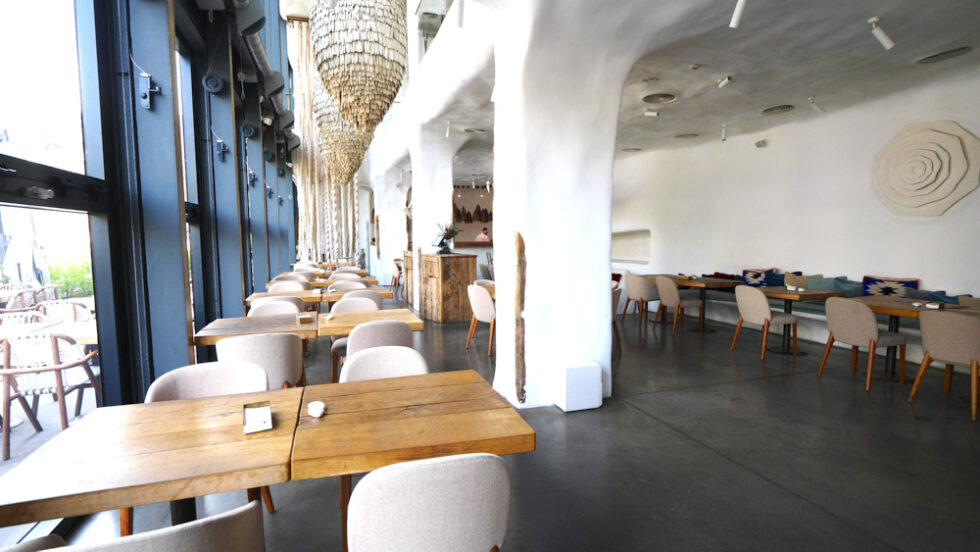 The interior of Sho is very white and has very high ceilings. Its architecture is made to look like the interior of a traditional clay village home. 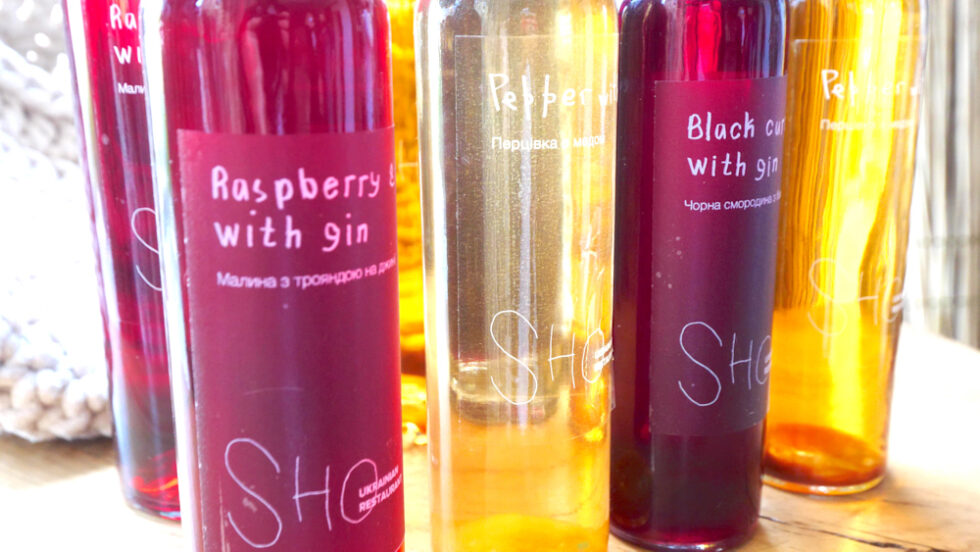 The wood elements in the restaurant actually came from traditional homes that the restaurant bought in the Carpathian Mountains south of Lviv. They also have unique chandeliers, some of which are made to look like beehives. It was gorgeous! 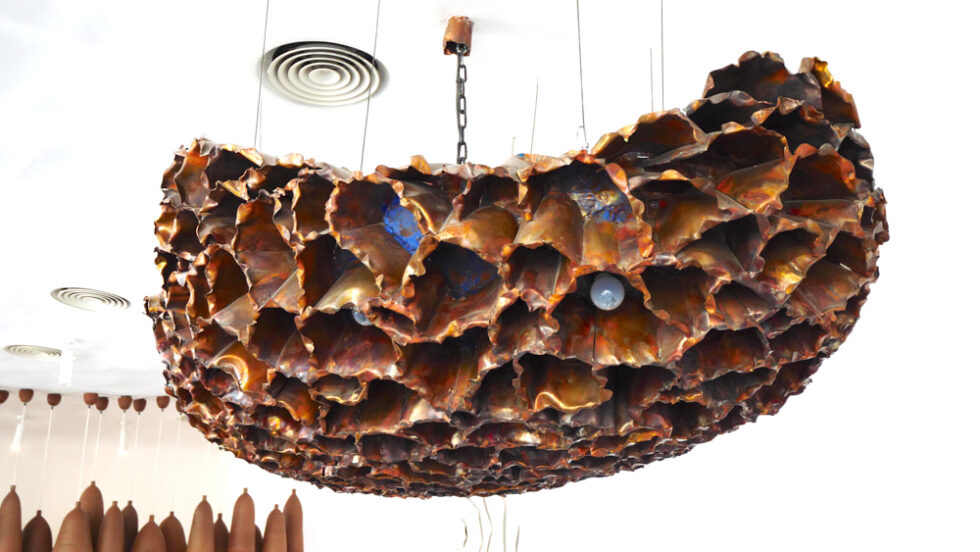 It was really spacious and minimalistic and reminded me of places I’d visited in Greece and Morocco. We headed upstairs to eat and take our master class. There, we met the chef, Inna and went into the kitchen to make some vareniki! 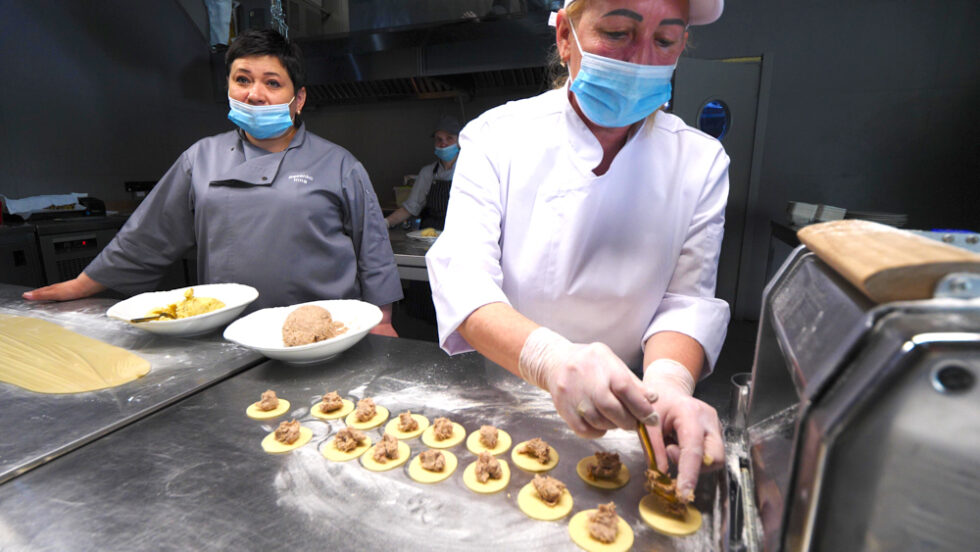 Vareniki is similar to ravioli, but for vareniki, they use a softer dough and don’t use eggs. Kefir is traditionally used in the dough. Vareniki can be stuffed with a variety of fillings, including boiled pork and beef, potatoes, and cheese.

Inna had already added some fillings for me, and then I pinched them closed. I wasn’t great at it, though! We had 3 kinds in total: boiled pork and beef mix, potato, and fresh and fermented cabbage. Then, they boil the vareniki in a pot for 5 minutes. Then, it was time to eat! 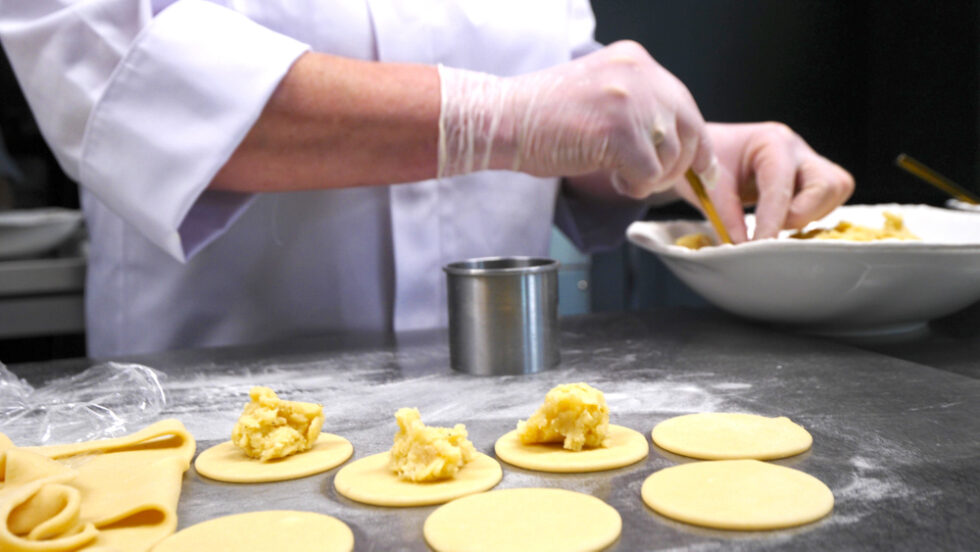 Our breakfast began with some small batch vodka. It’s popular with Ukrainian breakfasts! The vodka was crisp and chilled but wasn’t too strong. We had the different vareniki (including a kind with cherry filling), fermented vegetables, a cabbage roll called golubtsi, chicken Kyiv, cakes with cheese and fruit called syrniki, lard with fried onions, and blood sausage. 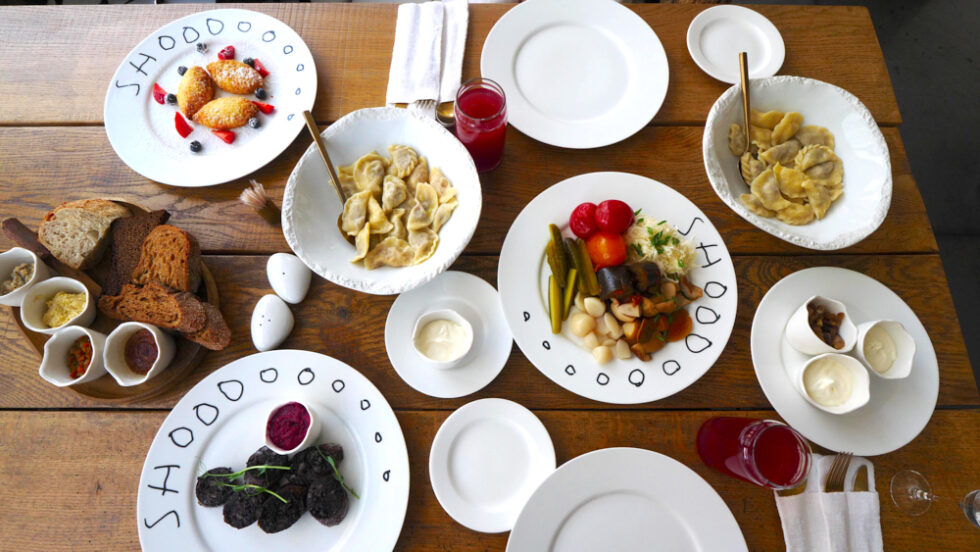 The boiled pork and beef vareniki was soft and melt-in-your-mouth good! Meanwhile, cherries inside the other variety pop in your mouth! I loved mixing the vareniki with the sour fermented vegetables, sour cream, and the savory lard with fried onions. The flavor combo was unreal! 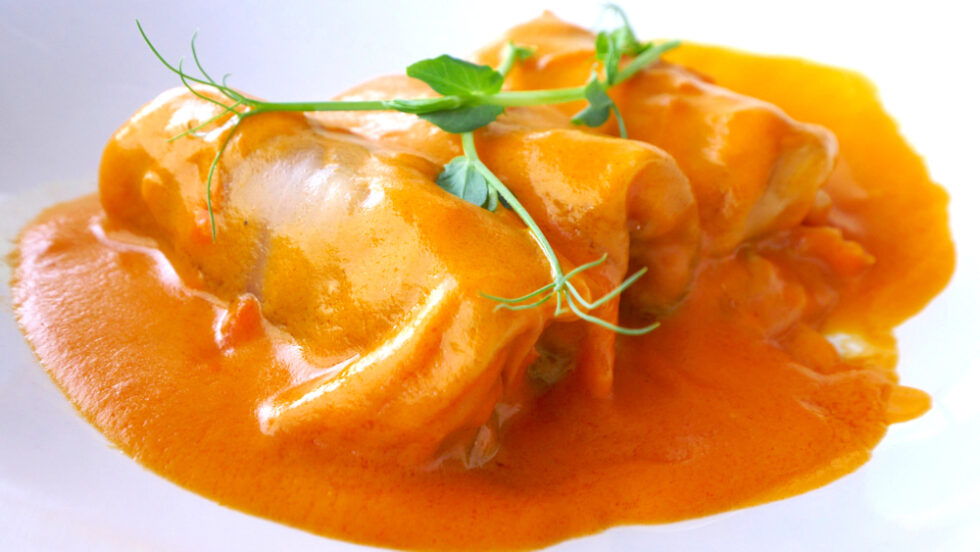 I love blood sausage, and this kind was fantastic. Instead of containing rice, it was made using buckwheat! It was crisp on the outside but the buckwheat gave it a whole new flavor. The chicken Kyiv cutlet was golden brown, with a delicious, crispy texture on the outside while still juicy on the inside. The chicken was so tender and flavorful!

Next was the golubtsi, which came topped with a delicious, tomato-based sauce. It was fantastic! The sauce was orange but had lots of tomato flavor. The golubtsi was even better with the sour cream. The creamy and slightly sour element added a whole new dimension of flavor and texture! Everything here was to die for! 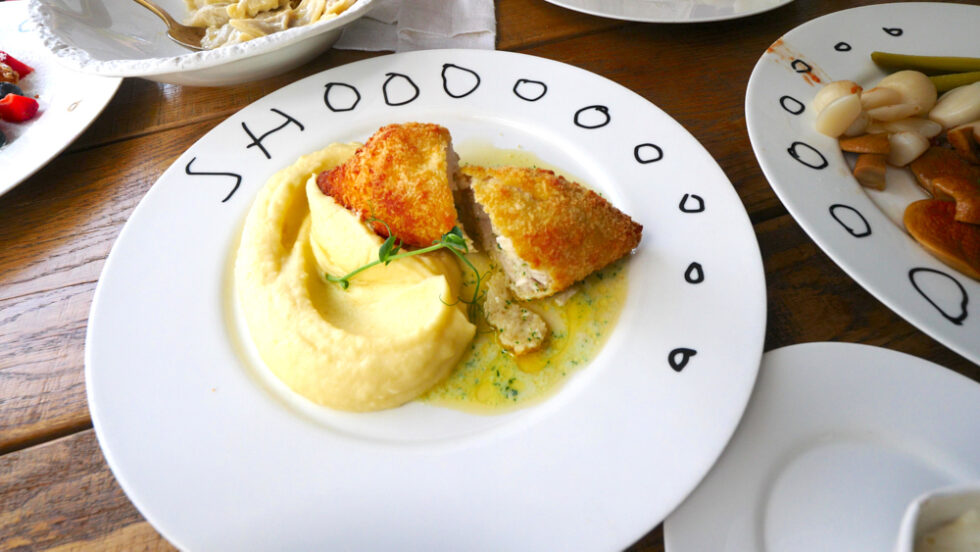 The buckwheat bread comes with different mashes, including pate. Then I jumped on the syrniki, which is a fritter containing cottage cheese, egg, and flour. It contains jam inside and goes well with the cottage cheese! 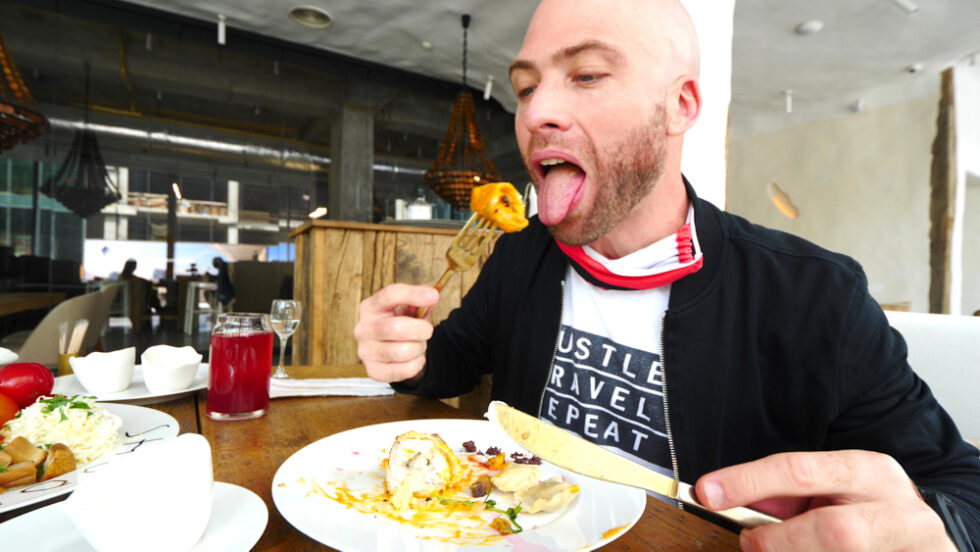 Then, Margarita and I toasted with some berry mors, which is a vitamin C cocktail. This one was made using cranberries! Then, before I left, they gave me some pottery including plates, a platter for bread, little cups for the pate, and drunk cup, and two bottles of vodka! They were too nice! 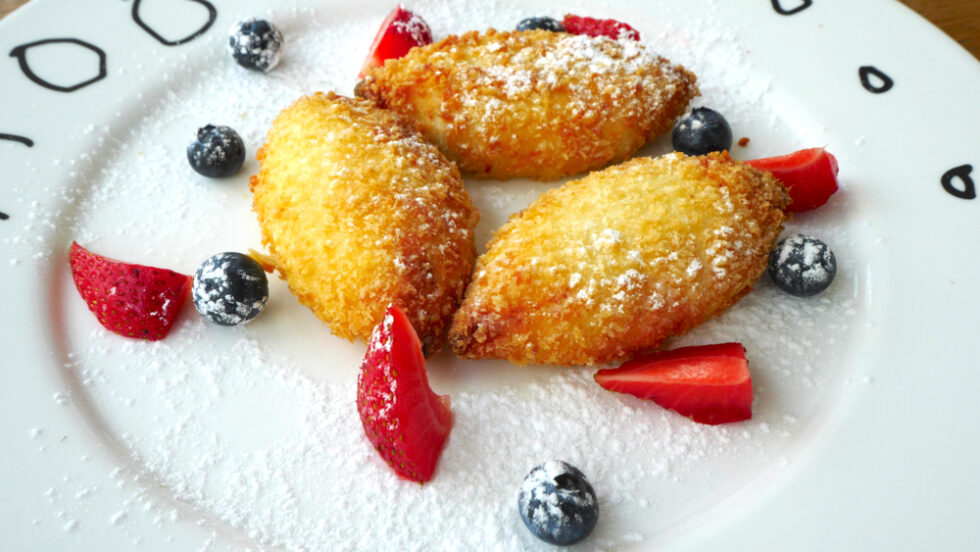 From there, Margarita and I drove five minutes through the Pecherskyi District, which is where the business area co-exists with the holy area. We arrived at the Park of Eternal Glory, which is a memorial for Ukrainians who died in World War II. 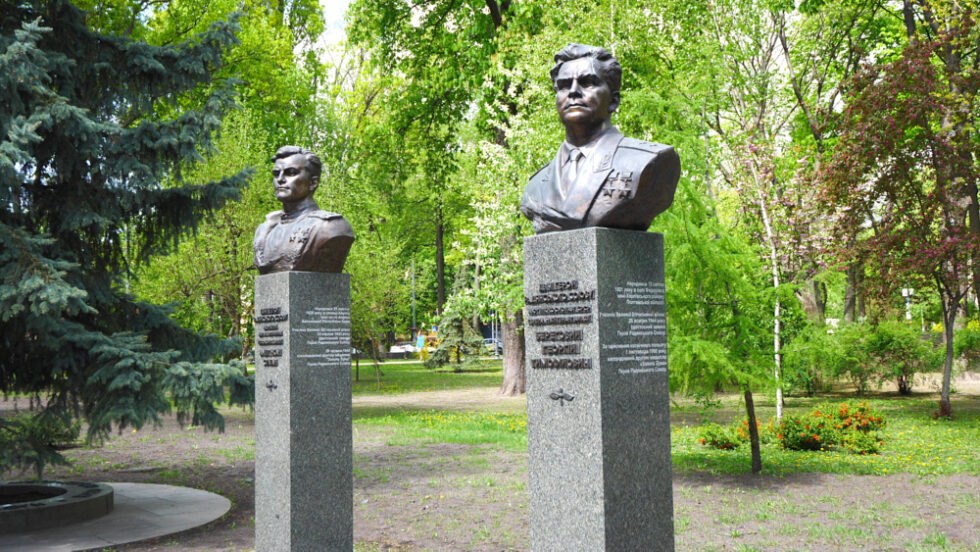 There’s an eternal flame and a monument. The park, like the rest of the city is very green. Kyiv is one of the greenest cities in Europe; at least 50% of its land is made up of beautiful, lush, green spaces!

The Alley of Glory is lined by fir trees planted on the 35th anniversary of Ukraine’s victory in World War II. Around each tree is a stone base that commemorates the hero cities that fought decisive battles in WWII. 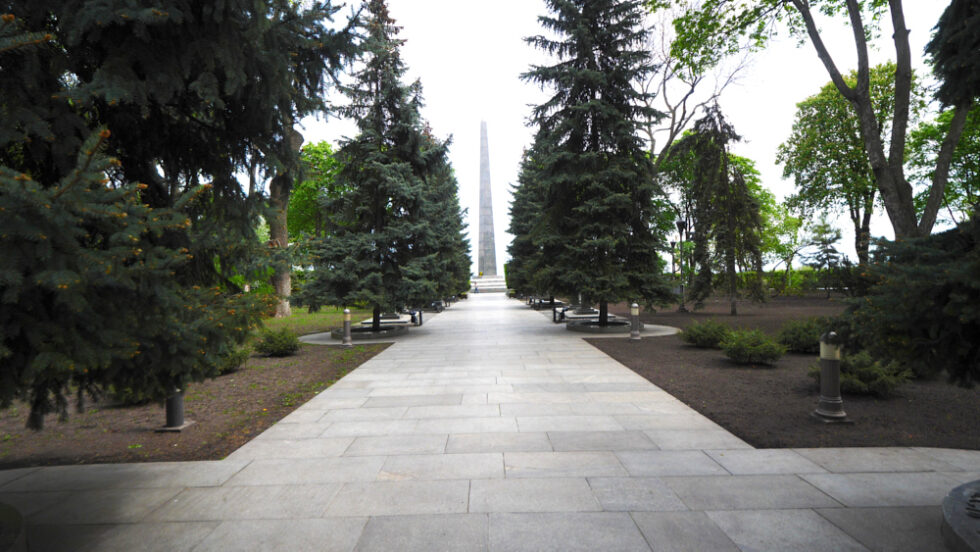 In the center of the Park of Glory is a massive pillar, which is meant to commemorate the unknown soldiers. Below the pillar is the Eternal Flame. There are also other statues and monuments honoring war heroes around the park. The Ukrainians managed to slow down the Nazi army. 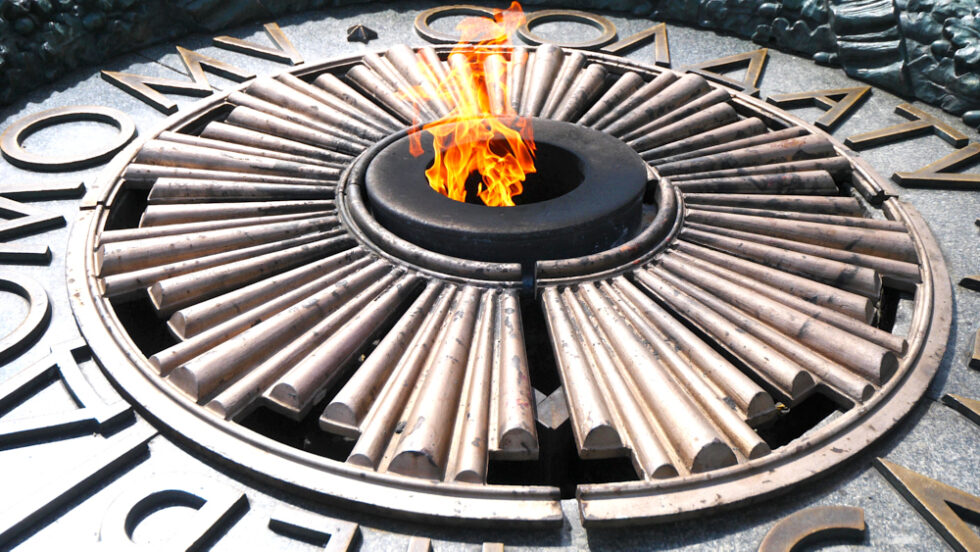 Next to the park is the Dnieper River, and nearby is a large candle structure that’s part of the Holodomor Genocide Museum, which is dedicated to the genocide that took place in Ukraine between 1932-1933. Stalin aimed to destroy the Ukrainian nation and took food from Ukrainian people and villages, leaving 10 million people to die from starvation. 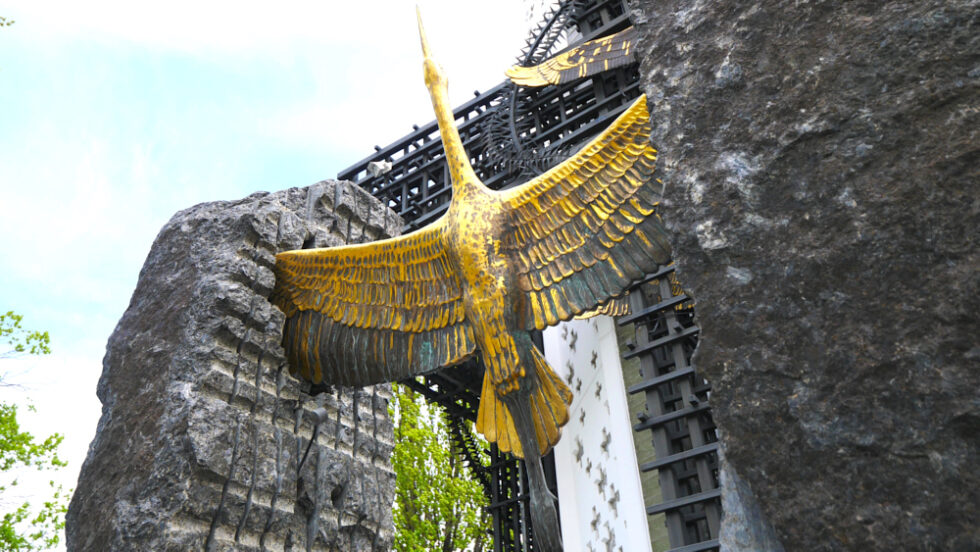 Outside the museum is a statue commemorating the children killed during the genocide. Children caught taking wheat from the fields were punished by shipping them away to Siberia, where they died. From there, we made our way to Kyiv Pechersk Lavra, or Kiev Monastery of the Caves. It’s a historic Eastern Orthodox Christian monastic complex that began as a cave monastery in 1051.

It’s part of a UNESCO World Heritage Site that also contains St. Sophia Cathedral. Kyiv Pechersk Lavra was also named one of the Seven Wonders of Ukraine in 2007. Roughly 120 monks live there today. It costs 130 hryvnia to go inside and up to the top of the bell tower, and only 100 if you don’t want to visit the bell tower. 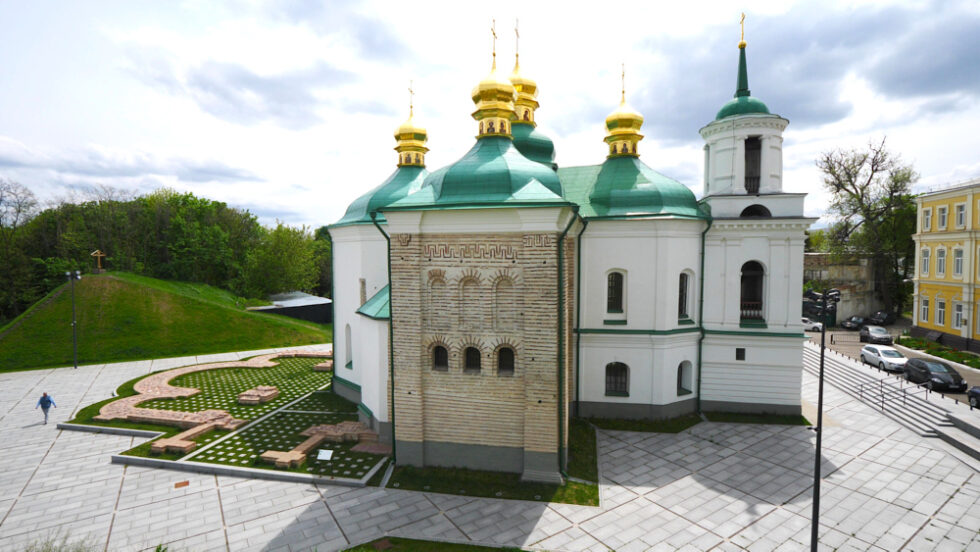 To the left and right of the entrance of the Gate Church of the Trinity are old, beautiful murals of saints. Inside is the Arch of Purification. It’s said you’re washed of your sins as you pass through. Parts of the original 11th-century brick walls are still on display inside. 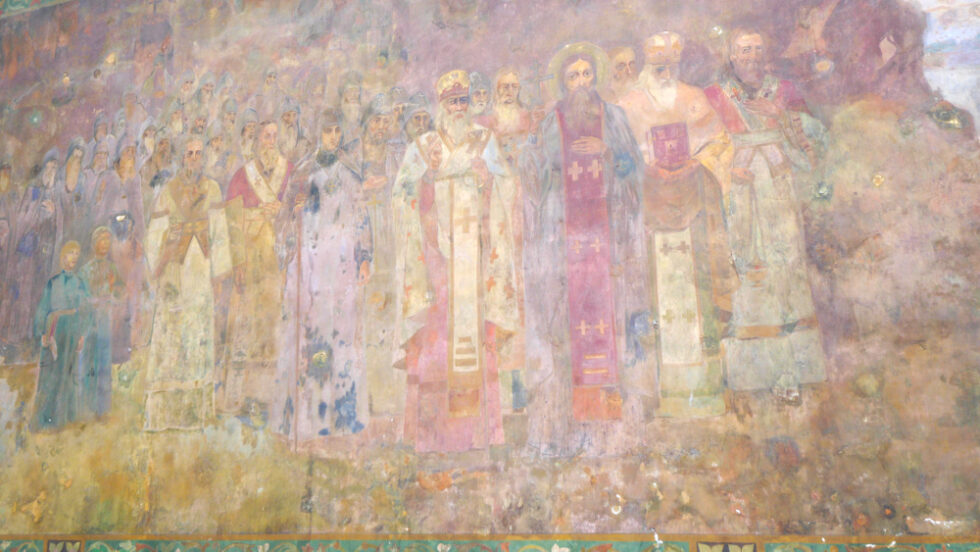 Dormition Church is the main church in Kyiv Pechersk Lavra. It dates back to the 11th century and was destroyed in World War II. It was restored in 1995 and consecrated in 2000. The Great Lavra Belltower is 96.5 meters tall. It was the tallest free-standing bell tower in the world when it was built in the 18th century. It was law for a long time that nothing in Kyiv could be built taller than the belltower! 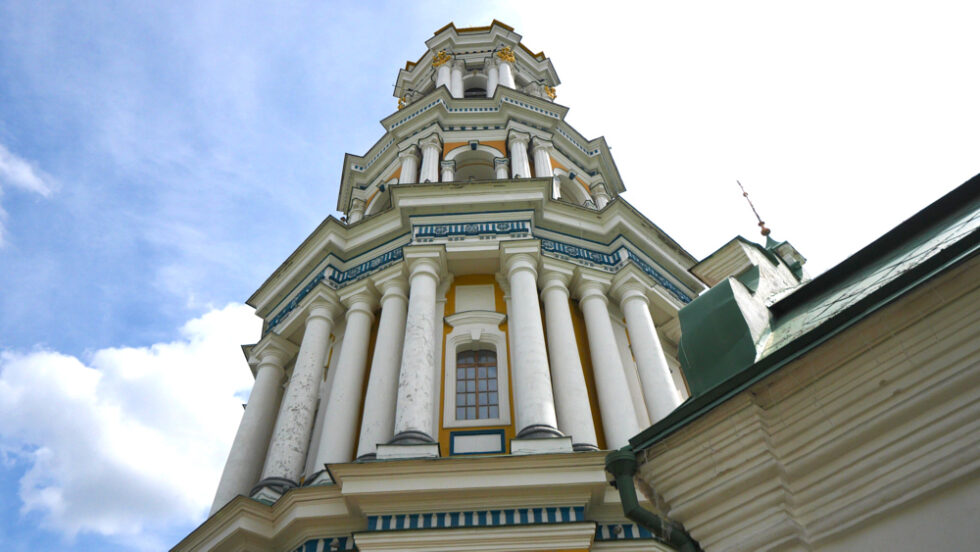 Climbing the stairs to the top of the belltower is tough, and the chilly air gets colder the higher you go. But the view at the top is worth it! From there, you can see the golden domes of Dormition Church, the Dnieper River, and The Motherland Monument.

The Motherland Monument is a stainless steel statue that stands over 200 feet tall and is part of the National Museum of the History of Ukraine in the Second World War! The viewpoint also offers 360-degree views over all of Ukraine. At the very top are 5 huge bells. The views there are even better! From there, you can see the monks’ old residences. 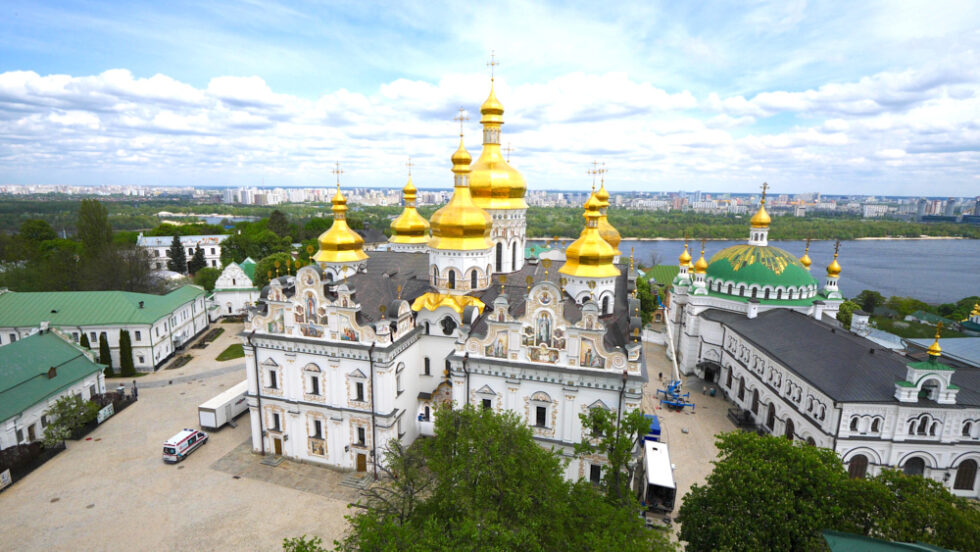 Then, we headed down to Trapeza Church, which was used for winter services. This church in Kyiv Pechersk Lavra contains the biggest dome in Ukraine and gorgeous frescoes. It looks very similar to the Hagia Sophia in Istanbul and dates back to the 19th century! 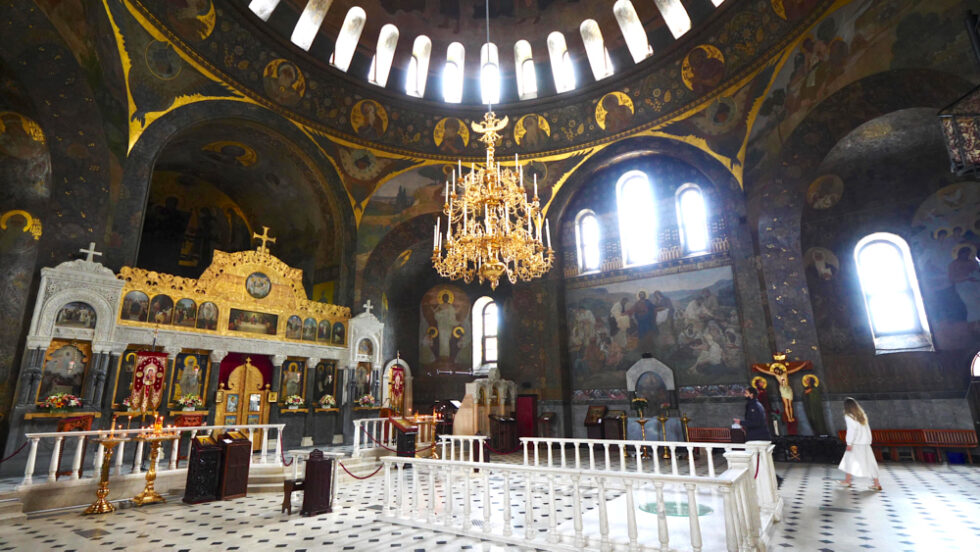 The church also contains a dining hall that used to be for the monks and lots of beautiful paintings depicting scenes from the Bible on its walls. It’s dark inside on purpose; the only light that gets inside is said to be from Jesus Christ. Visiting it feels like you’re stepping back in time! 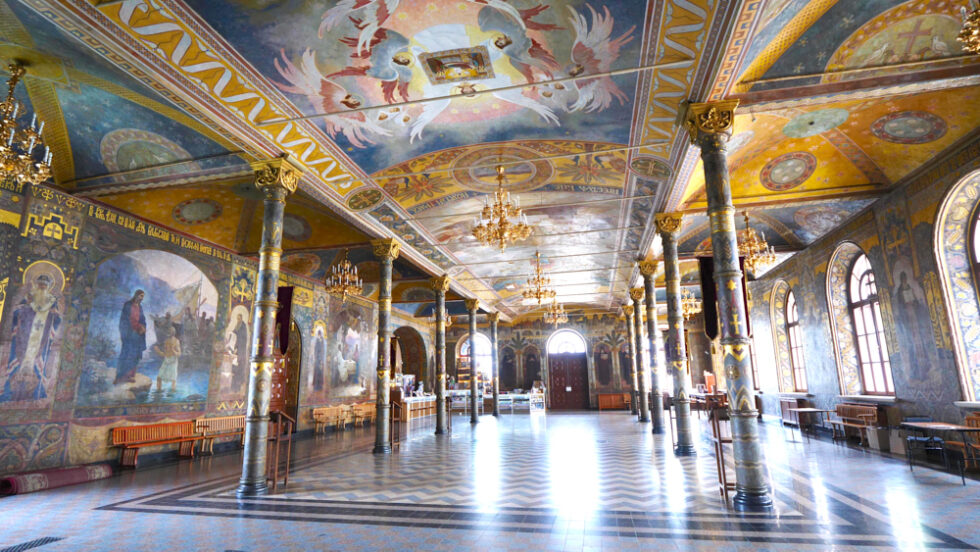 Our final stop was the Near Caves. Female visitors must wear a headscarf. You also must light a candle to see, as it’s very dark down there. There are chapels and mummified saints down there, but it’s also very narrow.

Then, we headed back to the Dormition of the Virgin Mary Church to end our tour of Kyiv Pechersk Lavra and another eventful morning in Ukraine! 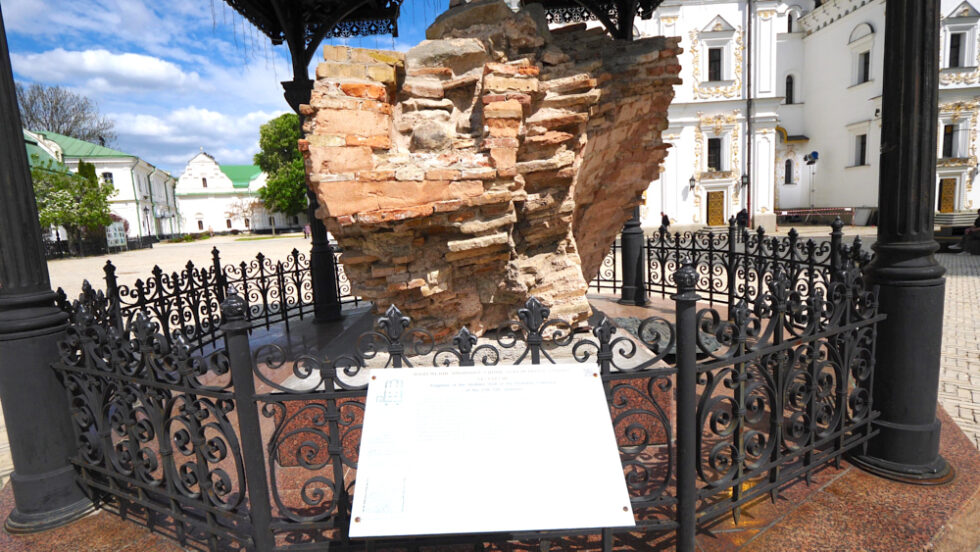 I hope you liked coming with me to make a traditional Ukrainian breakfast and explore Kyiv Pechersk Lavra in Kyiv, Ukraine! If you did, please give this video a thumbs up and leave a comment below. Also, please subscribe to my YouTube channel and click the notification bell so you don’t miss any of my travel/food adventures around the world!